Have you ever wondered what happens if you attack freighters like the pirates?

You’ve probably seen freighters and their accompanying cargo ships as you zoom through the universe of No Man’s Sky. But what happens if you decide, just like the pirates that you sometimes see attacking these convoys, to plunder them yourself?

First of all, you’re going to lose standing with the dominant life form in the system you’re in. Each cargo pod destroyed is -1 standing.

Secondly, the freighters at least will defend themselves. They have turrets.

Thirdly, you know those system authority ships that attempt to track you down any time you leave the surface of a planet before losing your wanted level? Oh yeah, they’re going to show up here too.

So, let’s rewind a bit. You probably want to make sure your ship is kitted out for a fight, right?

Well, yes and no. It depends on whether you want to stick around and pick off every single cargo pod. If you’re just going for a quick hit and run attack, even a starting ship will work, but you’ll want to be able to make a quick getaway.

A charged hyperdrive is one option, you can quickly enter the galaxy map and then jump away with your loot. If you’re at the point where you’ve unlocked the ability to summon the Space Anomaly, you can also use that for a quick getaway. Docking at a nearby space station is another possibility. All of these options will allow you to reduce your wanted rating back to zero quickly, since your pursuers will be unable to, well, pursue you.

If you want to do more than hit and run, you’ll probably want to equip your ship with some shield upgrade modules, as you’ll be taking quite a bit of fire while you pop cargo pod after cargo pod. The defence turrets on freighters are easy enough to take out, and the system authority ships that come after you aren’t really much of a threat individually, nor are they especially durable. But if you have weapon upgrade modules equipped, it’ll make the fighting go slightly faster.

You may need to recharge your shield as you evade or fight off the system authority ships. A Starshield Battery will work for this, as will Sodium or Sodium Nitrate. Alternatively, just avoid taking damage for a little while and your shield will regenerate on its own.

So, what are the downsides? 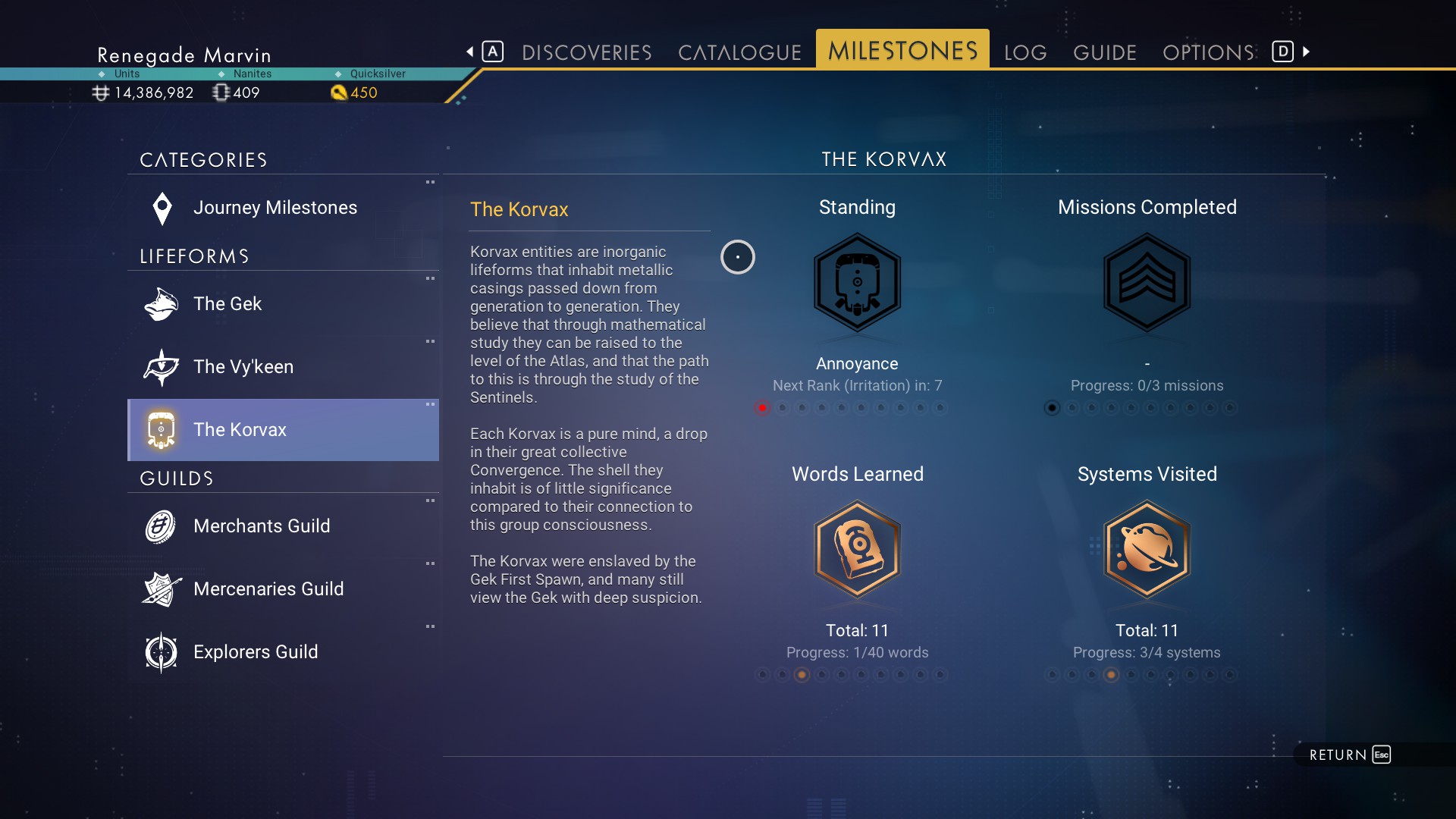 When your standing with a particular race is decreased enough, you reach what are known as hostile standing ranks. If you want to get back in their good graces, you’ll have to gift them things, do missions at the mission board, or destroy pirates in their star systems. The more damage you have done to your standing, the longer it will take to become liked again. There doesn’t seem to be a limit to how low your standing can go so far as I can see.

So, if we take this screenshot as an example, another decrease would mean that I would need to increase my standing eight times just to reach the next rank.

Speaking of the mission board… 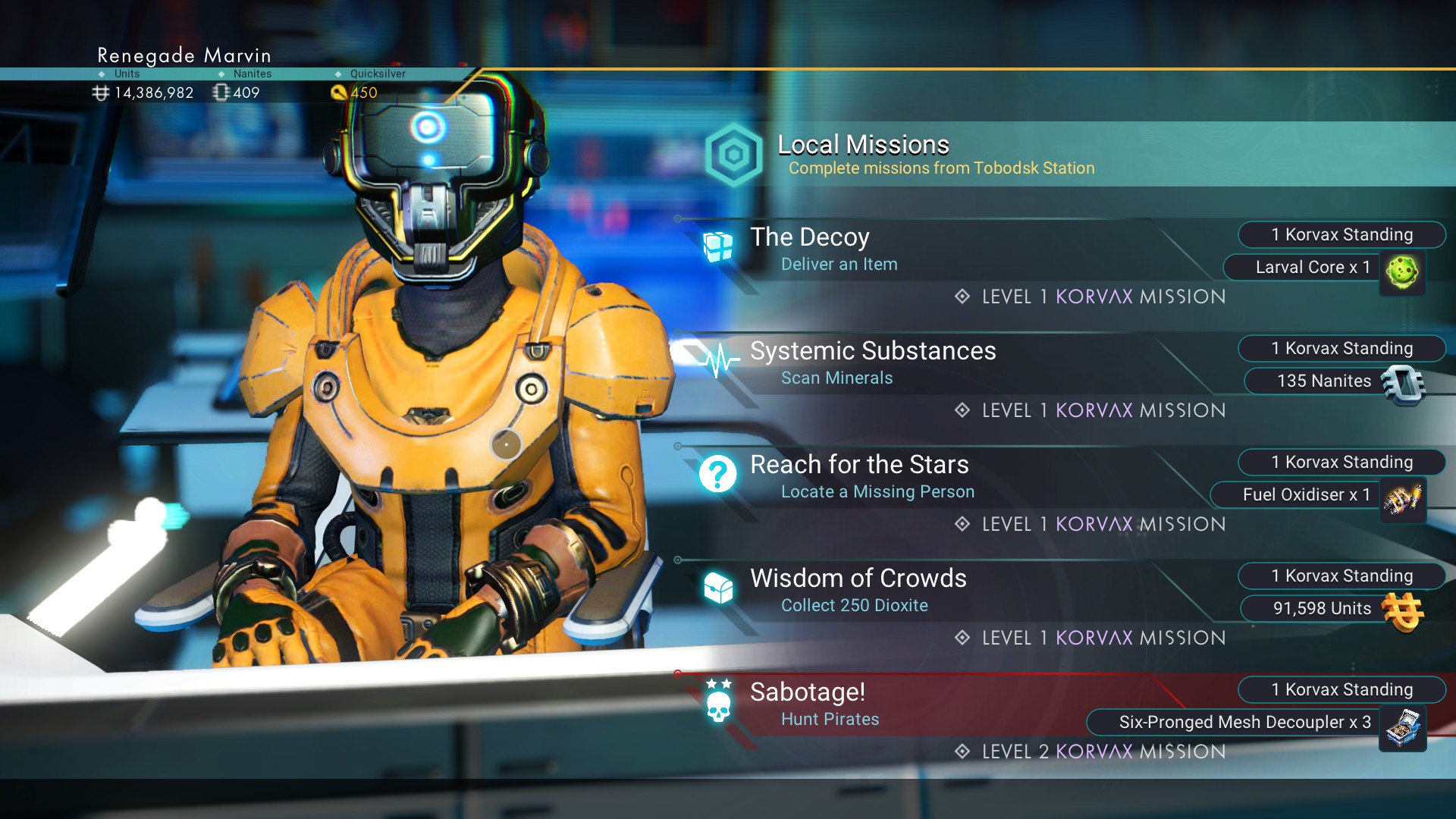 Hostile standing may have an effect on social interactions with that members of that race. Specifically, if you attempt to practice your language skills, they may get upset that you have used their cherished words while you’re of a low standing.

Given that at least one of the community expeditions had a focus on doing guild missions, you might want to hold off on being a pirate during an expedition until you’ve had a look at all of the milestones. Or, be a pirate that only targets one or two of the races (Gek, Vy’keen, Korvax) not all three of them.

Apart from this, there’s no apparent limitation on what you can and can’t do in their systems. You can still access the Galactic Trade Terminal, trade with the technology vendors, and get maps from the cartographer.

When you destroy a cargo pod, you may loot one of the following:

Destroying system authority starships will yield pugneum and debris pods containing mind control devices or explosive drones. However, flying into these pods to collect them will not recharge your shield as you might expect from having fought pirates.

This is all for No Man’s Sky A life of piracy hope you enjoy the post. If you believe we forget or we should update the post please let us know via comment, we will try our best to fix how fast is possible! Have a great day!