You’re in the right place.

NPCs can “move in” to houses that you build.

it doesn’t need to be a house or look like a house. But there are some conditions for it to be considered by the game to be “Suitable”.


To build a suitable house you need certain types of furniture and a living area: With 25 NPCs in the game it’s understandable that you want to keep them all in one place. There is also a Cat, a Dog and a Bunny NPC Pet that can be bought from the Zoologist and can be assigned to a house, but lives together with NPCs.


Added in 1.4 (Journey’s End) is the ability to form Towns which changes the background music and decreases enemy spawning nearby. How? Simply have 3 NPCs living in suitable houses within 100 blocks of each other or such.


Another thing added in 1.4 is the option to build a teleportation system with “Pylons” that function with 2 NPCs nearby and can only be bought from a NPC with hight Happiness. And this is where the point of this guide comes into play.

Happiness and what it does

Happiness is a new “hidden” stat that applies to each NPC individually. It is directly related to the price of items bought and sold at that NPC.

Each NPC starts out with 100 Happiness. It can be decreased down to 75 (which is good) or increased to 133 (this is bad)

When an NPC reaches 85 or lower they will sell Pylons.


This value is also the discount on the items, so if you max an NPC to 75 then all items sold by that NPC have their cost reduced to 75% of the normal max price.

Problem is… There is no way to check their current value except for choosing “Happiness” when talking to them, and even then they just give random messages based on their preferences.


Here are some general items each NPC sells if you want an easy way to guess their current happiness (if you are okay at math).

For example, if you buy the Piggy Bank for 1 G, and it costs 94 S, then you know the price is currently 94%, so happiness must be 94 at the moment.

Let’s explain the math behind this then.

Then the positive and negatives are multiplicative, much like crit chance and so on.

(I hope this is still correct, they’ve changed these numbers so many times now for like each update since the release…)


Note that distance is counted in tiles and from the “NPC hometile” aka, where their flag is located rather than the real distance between NPCs.


Note that the Pet Cat, Dog and Bunny will not count towards these checks.


Note that only Santa actually hates and Loves Biomes, so you can just ignore those two modifiers.

Let’s present an example with NPCs you can get early in the game: The Guide, Golfer and Zoologist. (+ the Merchant because the formula changed again) al placed in the Forest Biome.


Based on the chart we know the following:

The Zoologist likes the Forest and that her feelings towards the Golfer are positive (liked) and neutral towards the Guide and Merchant.

The Golfer likes the Forest and has a very positive feeling (love) towards the Zoologist and neutral towards the Guide.

The Guide also likes the Forest and has a positive feeling (like) towards the Zoologist and neutral towards the Golfer.

But let’s ignore the other guys and just focus on the Zoologist for now.


Let’s say you want to buy something from the Zoologist, the Squirrel Hook for example, a useful early game Hook item that costs 2g.

If we cram all four of them into the smallest possible rooms as close to each other as possible. 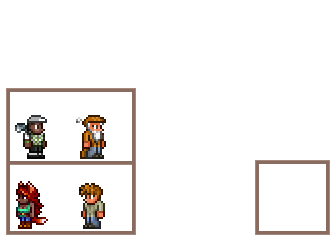 If we remove the Merchant or move him more than 25 tiles away from the others we instead get: What if we cram all 25 NPCs into the same area but we make sure that there are no more than 2 within 25 of the different “houses” and just the Zoologist, Golfer and Guide sharing a place. No bonus nor penalty for overcrowding

The worst case scenario we cram all NPCs into small barracks as close to each other as possible. But for the sake of brevity we assume that there are no hated or disliked NPCs within 25. 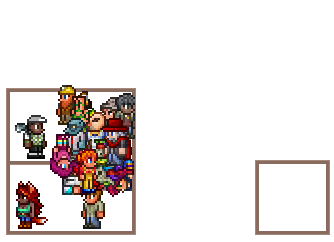 Let’s go with the best case scenario. Careful placement to make the Zoologist as happy as possible. We switch out the Guide with the Witch Doctor and remove the Merchant. Making sure that only 2 NPCs are within 25 tiles whom the Zoologist have positive feelings towards. We also make sure that there aren’t more than 3 NPCs between 25 and 120. 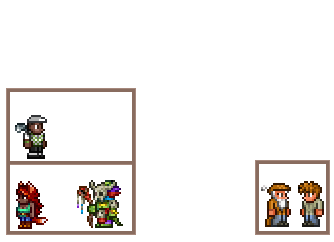 (actually, placing the Princess (now that she exists) within 25 as well would result in 73 instead of 74 since the bonus for liked NPC is greater than the “non-crowded” bonus.)

So remember to only keep 3 NPCs close nearby, any more than that and you lose one of the positives and instead get a negative.

So Pylons are sold once the happiness of a NPC is 85 or lower. But why get Pylons?


Well Pylons form a fast travel network, each pylon matches a biome in the game which means you can travel there near instantanious if you have it placed near (100 ish blocks) of 2 NPCs and in the correct biome.

There is a Pylon for the following biomes:


For an NPC to sell the Snow Pylon for example the NPC must be considered to be in the Snow Biome when you shop with them.


Once bought you can rearrange your NPCs however you want, you can even buy multiple ones and store them for later if you don’t wish to repeat it in later playthroughs.


Simply put. Place any NPC in a biome they like with at least 1 npc they like within 25 and their Happiness should be 84, enough to get a 16% discount and open their inventory for the Pylon of that biome.

Or place an NPC with an NPC they Love in any Biome they don’t dislike and it should give you the option as well.

If the Corruption or Crimson overtakes your Desert or Snow biome the Pylon will no longer function since the game will consider it to no longer be a Snow biome.

Same thing goes with the Hallow biome which will override the Snow, Desert, Ocean and Cavern Pylons if there are too many hallowed blocks around.


Likewise The Cavern Pylon works in the Underground, Cavern or Underworld layer. But the underground- Jungle, Snow, Desert will count before that preventing the Cavern Pylon from working there.

The Universal Pylon is unique in 3 ways.

2. It can be placed anywhere

3. It doesn’t need NPC around to function


To get the Universal Pylon from the Zoologist you need to fill out your Bestiary (monster/critter/NPC list) to 100% in that world.(has this changed with the release of Princess and Deerclops?)

To achieve this you also need to bring in the other evil into your world.

I would suggest going for this in one world, then just buy tons of them and save for later.


So if your world has corruption then you also need to bring in Crimson to gain the entry for those monsters.

Your world will either have: Salamander, Giant Shelly or the Crawdad so only 1 of those are needed.

I’m sure there is a good guide out there for this.

NPC Preferences (with pictures and lists)

The problem here for making the perfect setup is that the NPCs don’t feel the same towards each other.


You’re getting these two charts as well as a link to the official wiki: 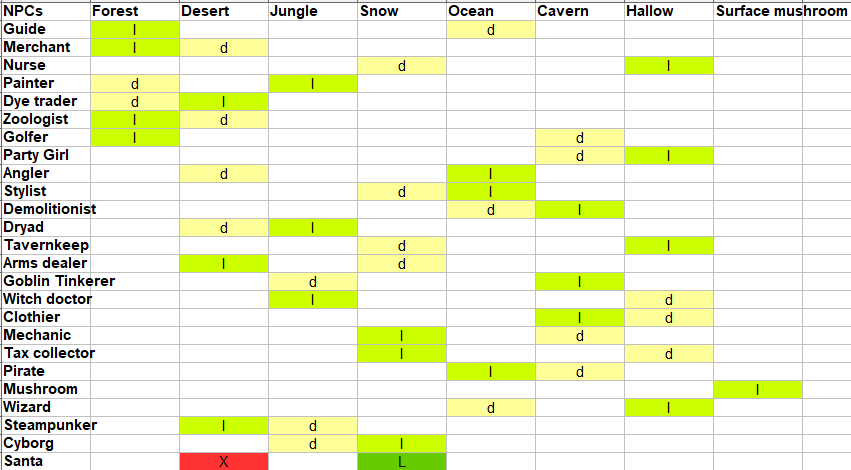 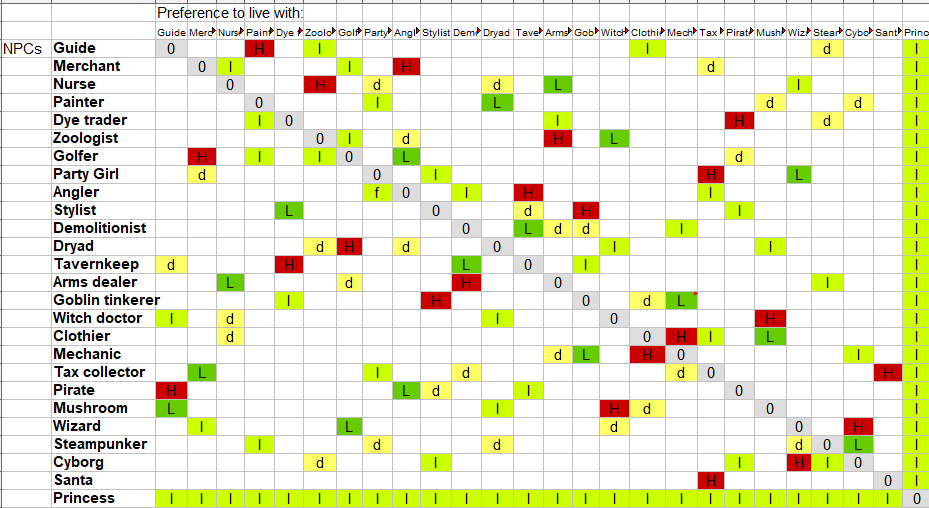 Some of these preferences are mutual but far too many aren’t leading to a bit of a puzzle to make it work. But these are your ace pairings regardless of location:

Alright, so this is too much thinking for you? Just want answers? I will list two setups here. One for pre hardmode and one for hardmode.


Both will assume that you want at least 1 NPC happy enough to purchase a Pylon in that biome and have access to all of them.

My personal preference will go in here as well of which NPCs I tend to prioritize.


“House” In this case refers to suitable housing with the NPCs ending up within 25 of each other but not within 25 of the other one.


There you have it, not everyone will be in their prefered biome or with prefered people but at least some sort of positive result. And at least 1 of the NPCs in the biomes should be down to 85 or lower to sell you a Pylon.

House 1 – Free space for 2 NPCs to move someone here when you want a simple “non-crowded bonus” or more for certain purchases.


We now use the pets to fill out to decrease monster spawns and crowd some of the Biomes (but less than 6 in each to get the most out of them. There can of course be other setups but this is how I prefer to do it.

This is an attempt to get the most out of your NPCs, to get all relevant NPCs down to the lowest possible discounts.

Some of these NPCs could of course be happier, but I have disregarded their happiness for other people’s happiness.


Sorry, never finished this one. Lost my inspiration trying to find the perfect setup for each NPC.

But it would involve making sure that some NPC are within 25 of others but not that all of them would be.

Or by placing settlements between two biomes. For example The Cavern Pylon being next to an underground snow biome for the Mechanic.


Instead lets list how to make certain npcs happy and build from that! A different type of maxing


In this case I will prioritize:

Those are the only NPC you actually buy stuff from right?


A lot of these will of course be similar to the above. But more at the expense of other NPCs we now disregard.


So you are free to do whatever you want with the Snow, Jungle and Hallow biome here. Not as important, but suggestions follow:

Clothier(95) + All the pets because no one likes him


Place the Princess near any NPC that you want to buff up, just don’t get her too close to the others to inflict the penalty.

Hope you enjoy the post for Terraria Happy NPC Explanation and Setup, If you think we should update the post or something is wrong please let us know via comment and we will fix it how fast as possible! Thank you and have a great day!