An in depth guide to every light setting in SFM

In this guide, I will go over every single setting in SFM’s long list of light settings, starting with intensityand ending with edgeHeight. I will not explain the color settings since they should be self explanatory, or the transform settings since they don’t do anything.

The functions of these settings that I will be covering in this guide are just my understanding of them. Some have unknown functions that no one really knows. 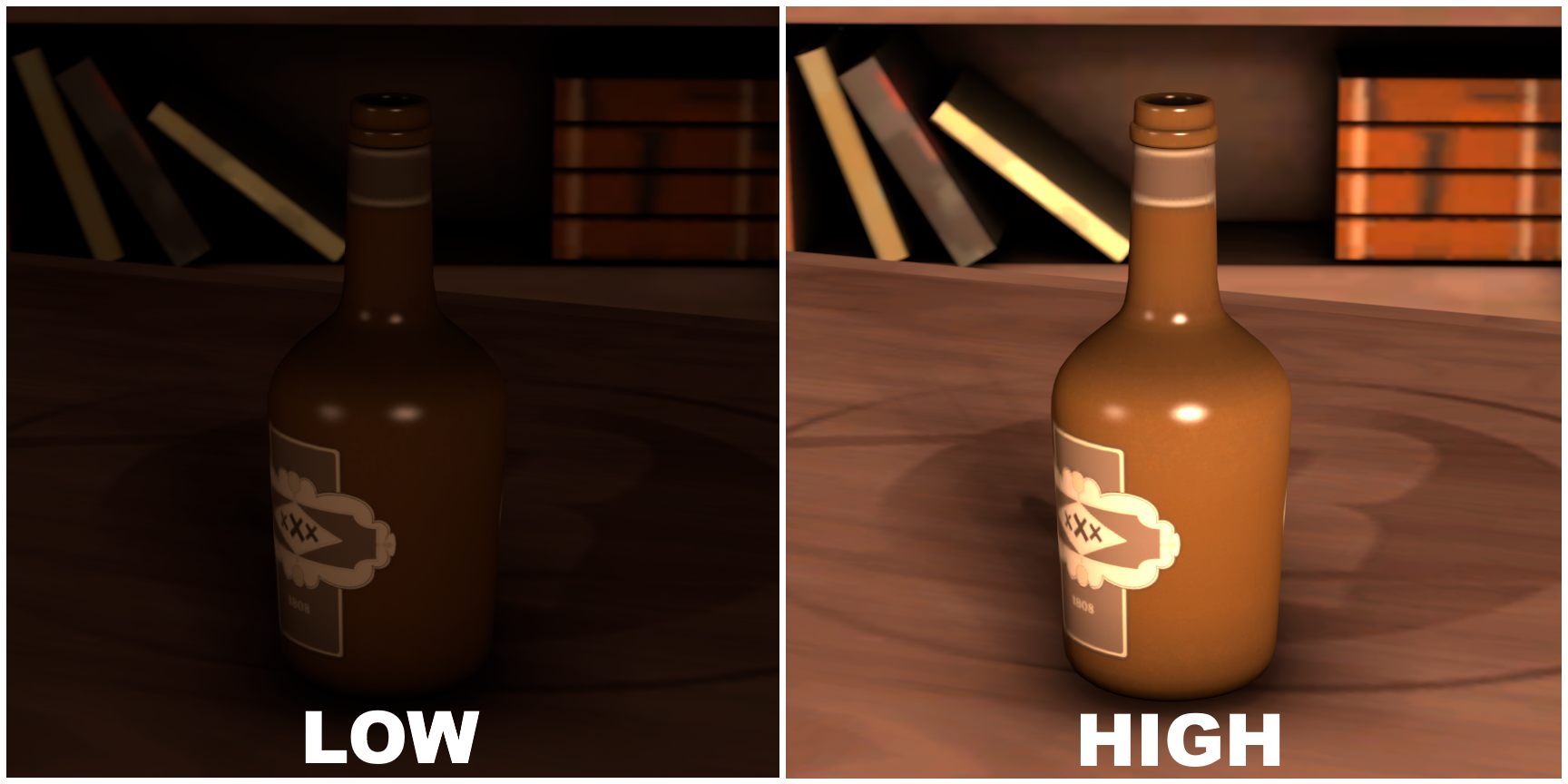 In my 4 years of using SFM and from asking others, it seems like no one has any idea what this does. Just ignore ambientIntensity.

Note: This does actually do something in S2FM, but I wont get into that here. This slider also cannot be remapped, not that it matters though.

These two values can also be more easily manipulated by simply dragging the light from the Animation Set Editor to a viewport, and moving it just like you would a camera. 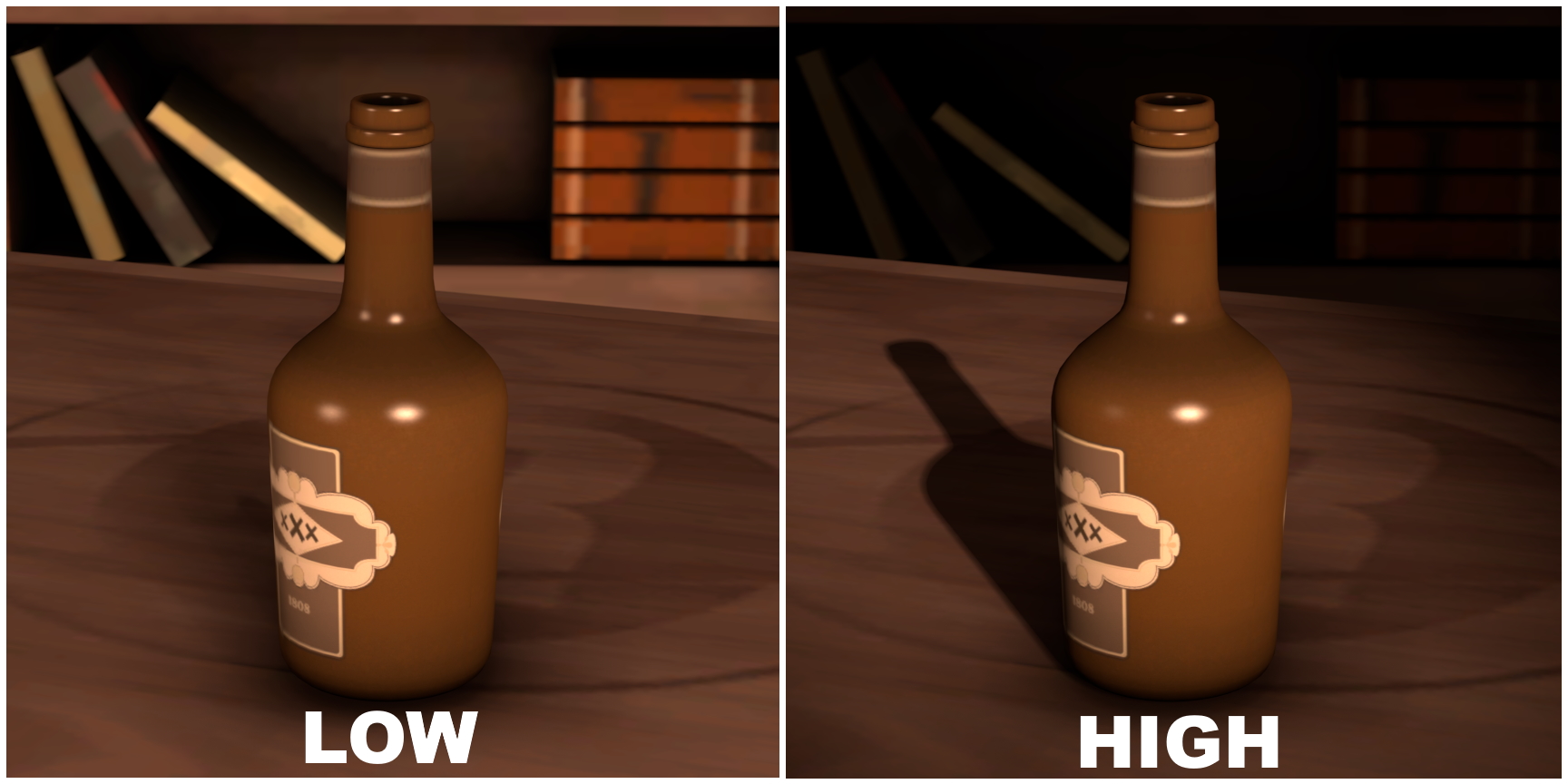 The radius setting changes the “size” of the point light. Basically, it mimics a larger light source.
For example, a low radius light could be something like a flashlight. A higher radius light would be more akin to a spotlight. The biggest difference that this makes is shadows become less harsh, smoothing out and coming to a point as it goes on. 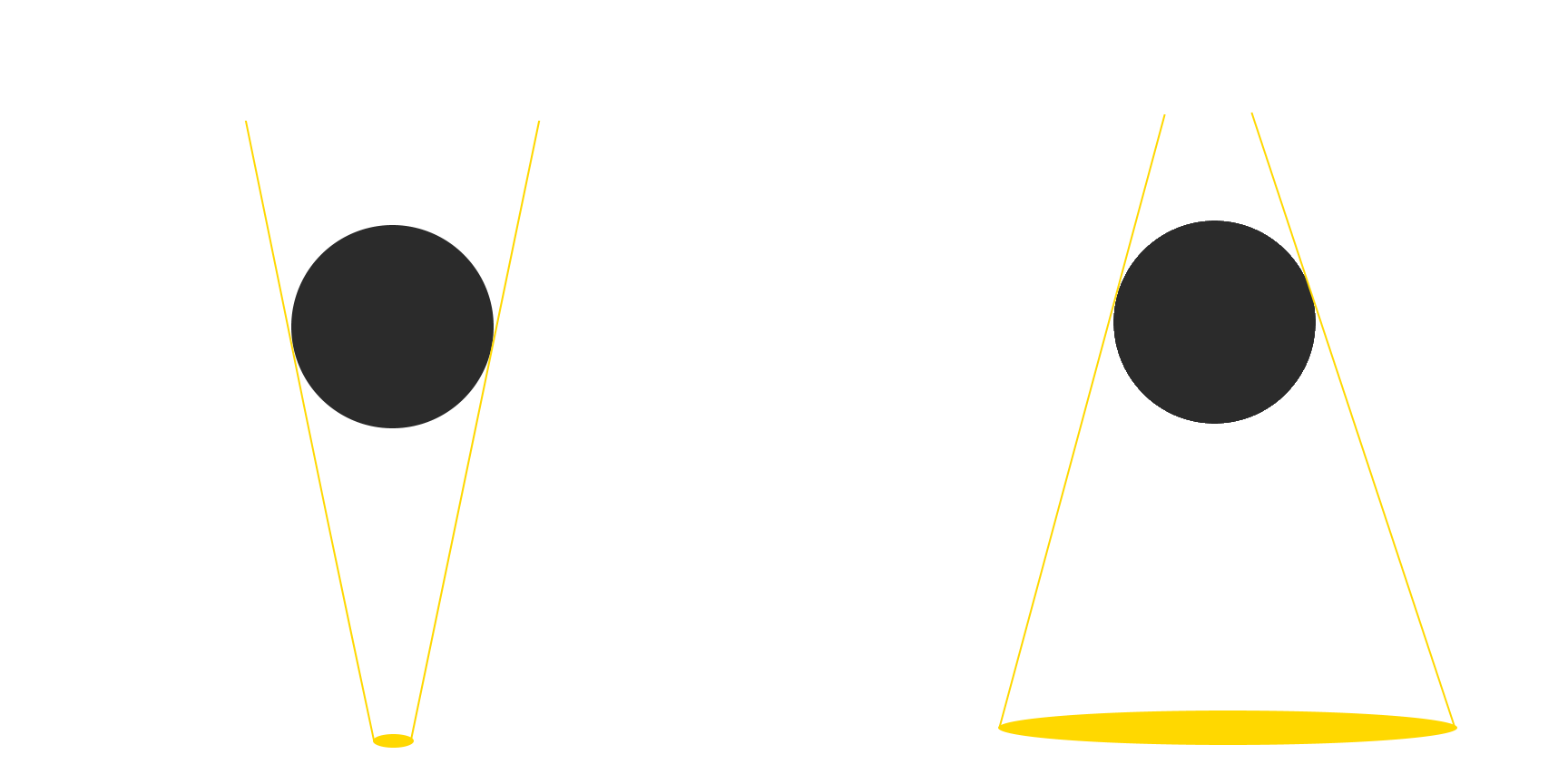 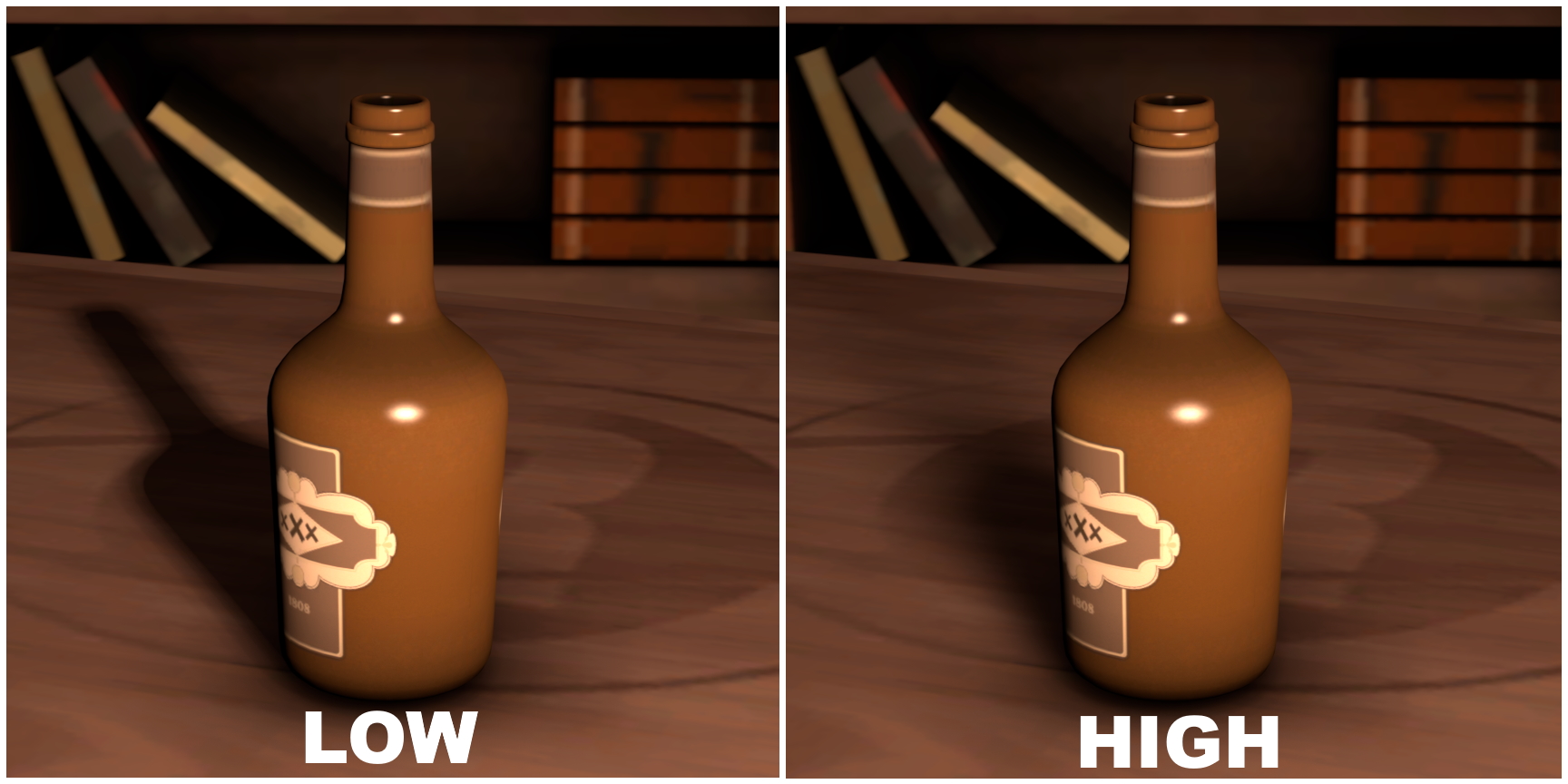 Since radius is basically changing the “size” of the point light, it will also cause light to wrap around objects, making it have a softer appearance. 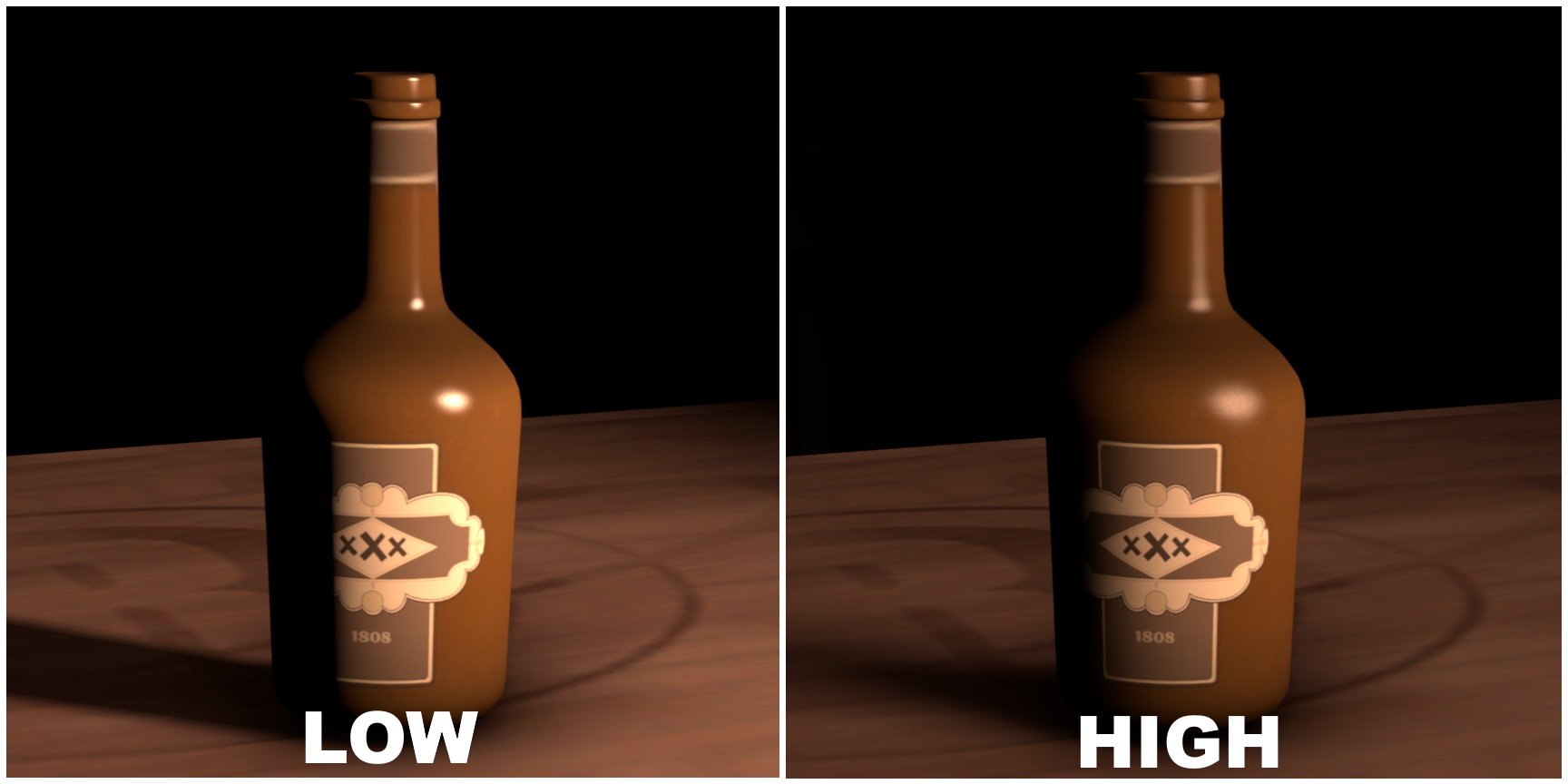 This is most useful for key lights, where softer shadows, unlike rim lights where bright and shiny edges are important. 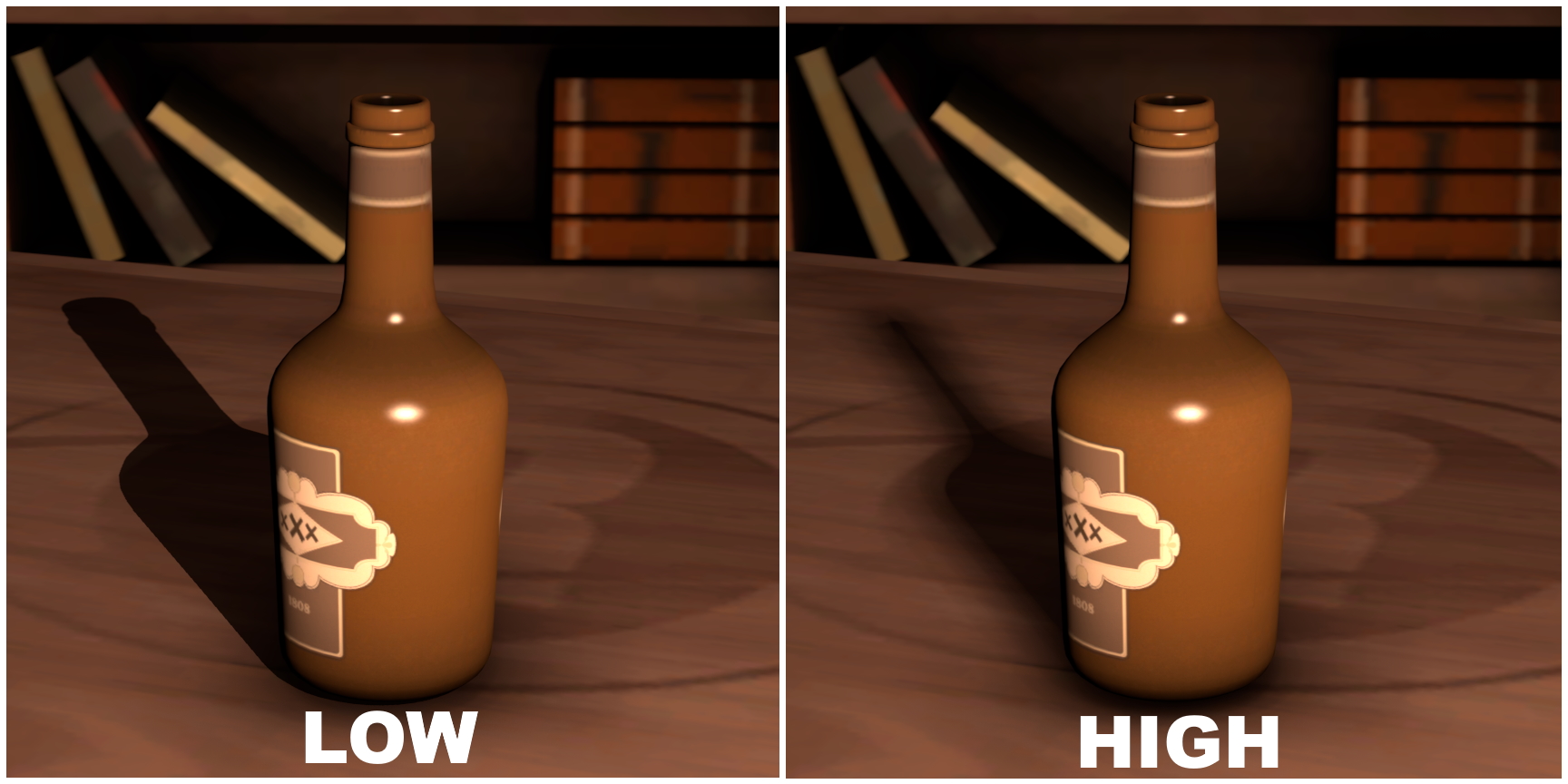 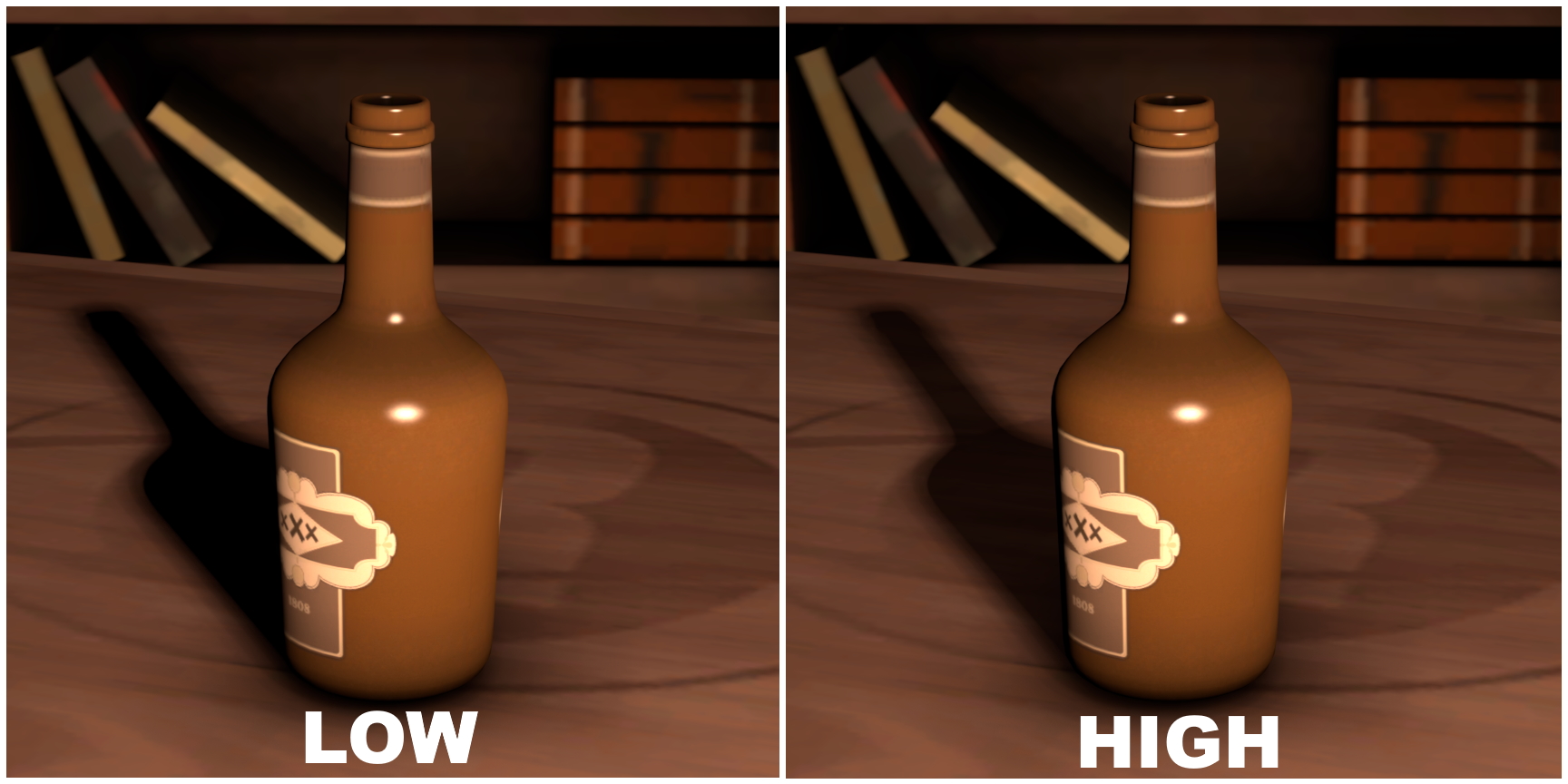 Note: this slider cannot be remapped

These two are strange ones. On the surface, they simply change the minimum and maximum distance away from the light objects will be lit.

If any part of the object is within the bounds, the entire object will be lit normally. If you look at the above video, the table does not bec

However, there is something to note here. Sometimes you might notice that certain areas are being lit up, even though they are outside of the bounds defined by min and max distance. This is because of the way that SFM does lighting. If any part of the object is within the bounds, the entire object will be lit normally.

If you look at the above video, the table does not become dark until the min distance boundary has moved past the entire table, so that no part of the table is in the bounds. If you don’t like this, you can change the light to an Uber light, which I will not talk about here.

In SFM, lights by default start bright at the base, and slowly dim as the distance from the source increases. These 3 settings change the way that this functionality works.

By default lights in SFM are quadratic, meaning that as you get further away, the light gets increasingly darker. The constant setting is more of a toggle button rather than a slider. Its either constant or not. 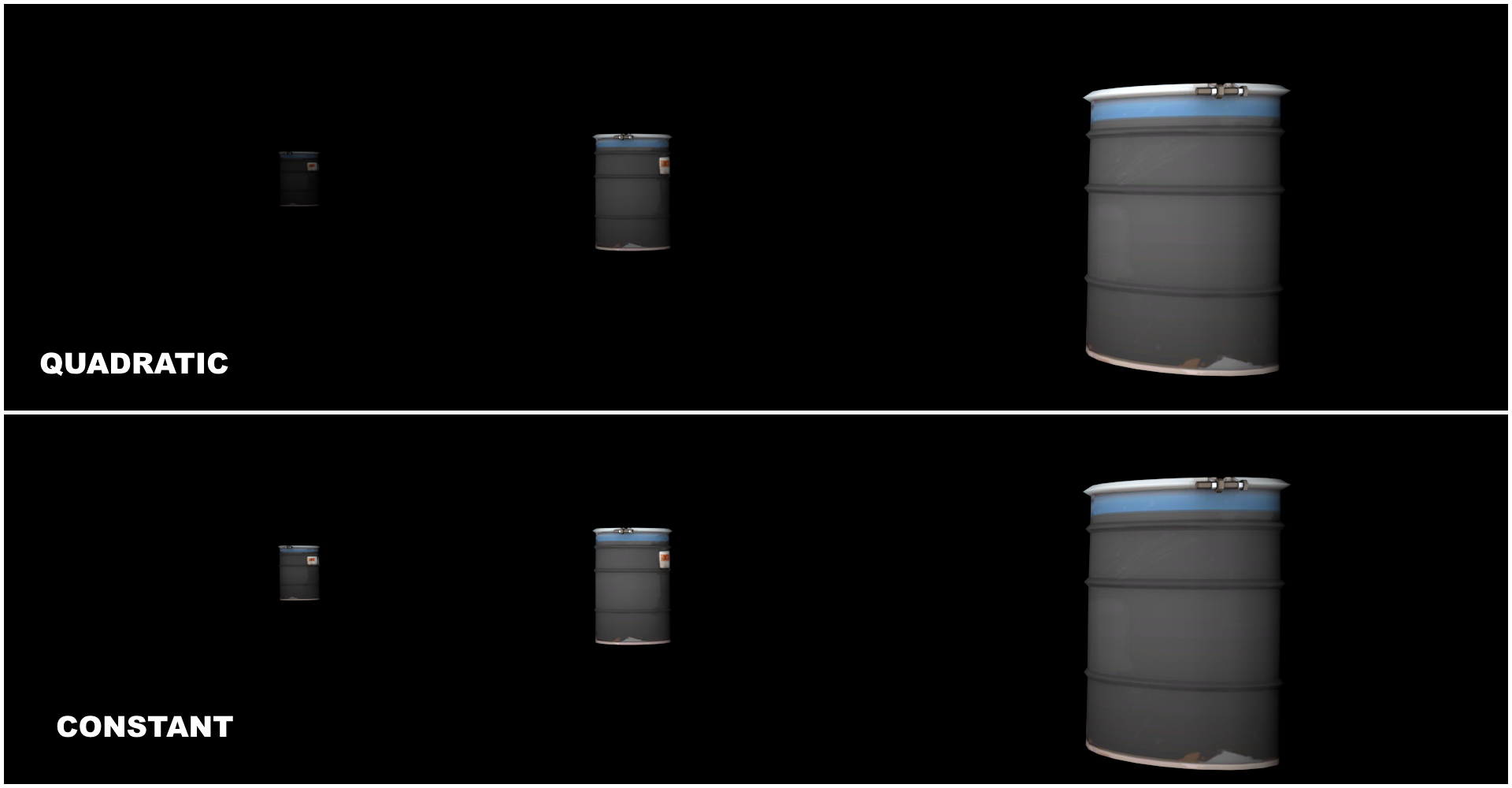 Unlike quadratic, linear will cause the light to lose its brightness at a steady rate, rather than an increasing rate. Increasing this slider will only increase the rate at which the brightness of the light drops off. However, most of the time this effect is indistinguishable from intensity. 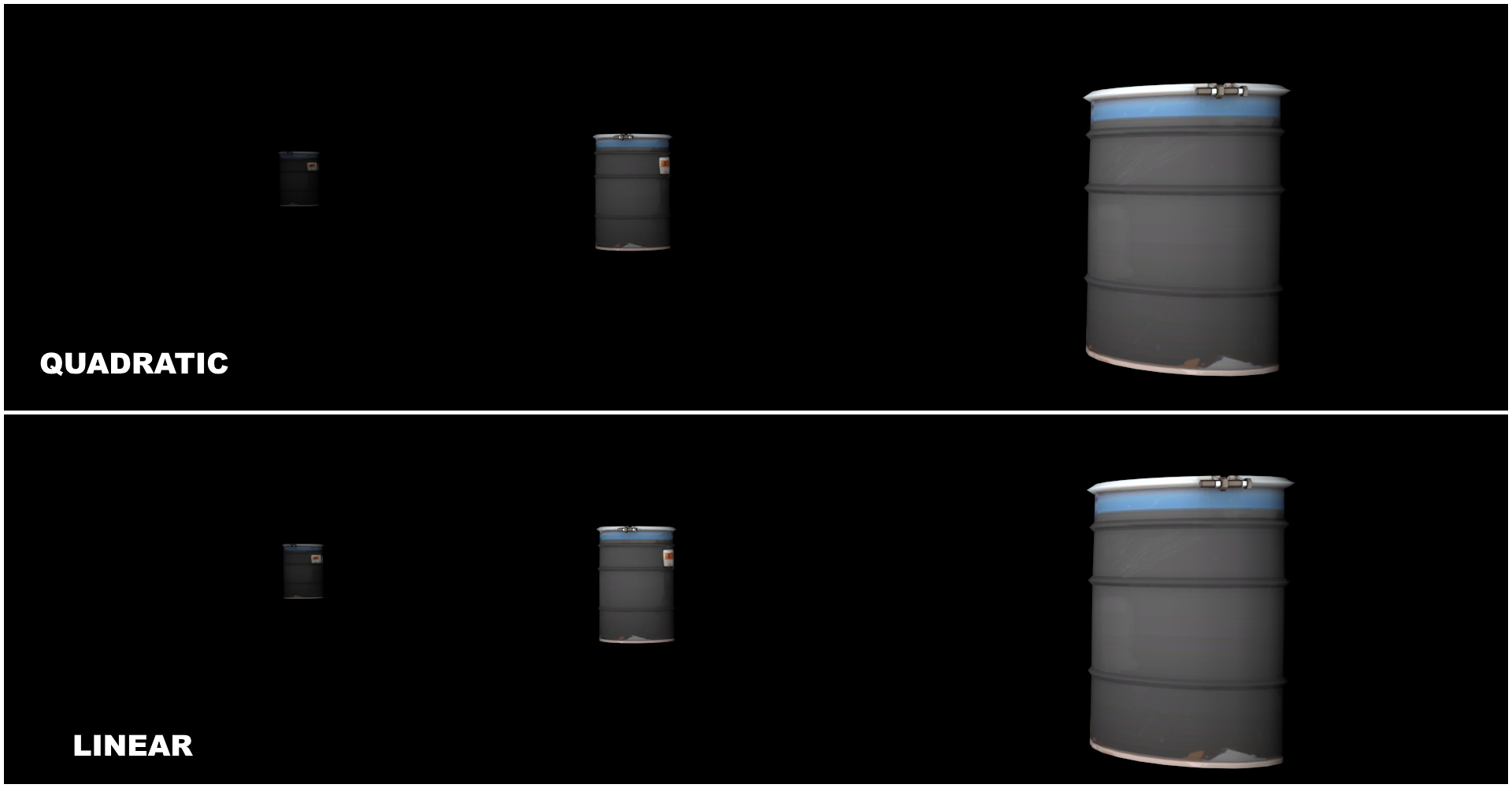 By default, shadowDepthBias has a maximum value of 0.001, so it really doesn’t change anything. However, if you remap this to lets say 1, then you will notice a difference.

shadowDepthBias, kind of like minDistance, adjusts when SFM will start to render shadows. This isn’t really useful in 99.9% of situations, so don’t really bother with this. 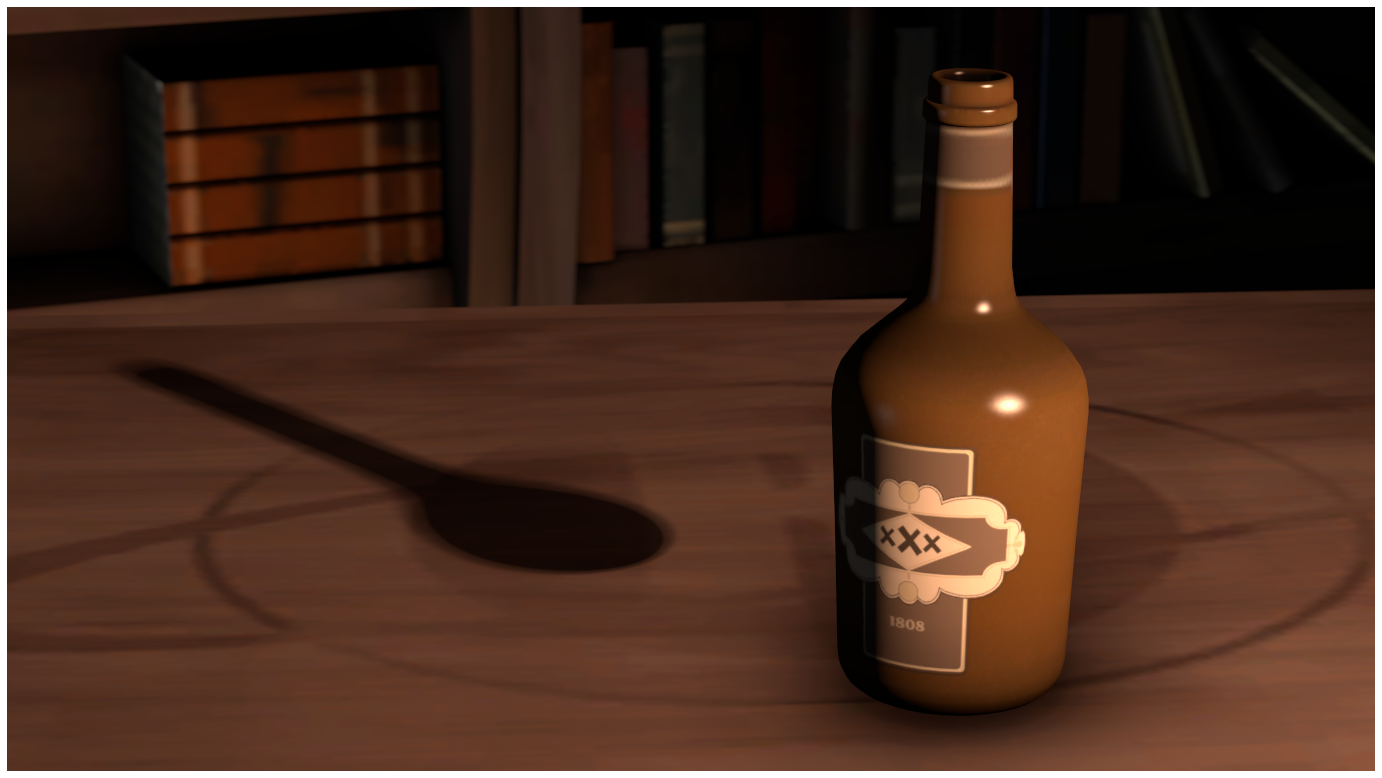 As you can see here, the shadow of the bottle doesn’t start at the base like it normally would, instead it starts part way up the bottle. This is incredibly unrealistic and jarring, and not a good look. This is really only useful for when you have a model with small details that are causing weird shadows. You can increase the shadowDepthBias in these cases to remove these small shadows.

Honestly, I can’t really figure out what the point of this setting is. The slider is set to a max of 10, but you can remap this. However, after setting it to 1000, all I can really say is that it “thins” out shadows, narrowing shadows at their base. Honestly, I’ve barely used shadowDepthBias let alone shadowSlopeScaleDepthBias. These two are mostly just used in unison together to refine your shading. Just experiment around with it and see what works best.

farZAtten is also quite confusing in its exact function, but most commonly it is used to further extend the range that your lights can reach. The maxDistance slider, even when remapped, can only allow a light to extend so far. However, combined with farZAtten, your lights will be able to go much further. This is very useful for relighting entire maps, where you need to place a light high in the sky to light the entire map. 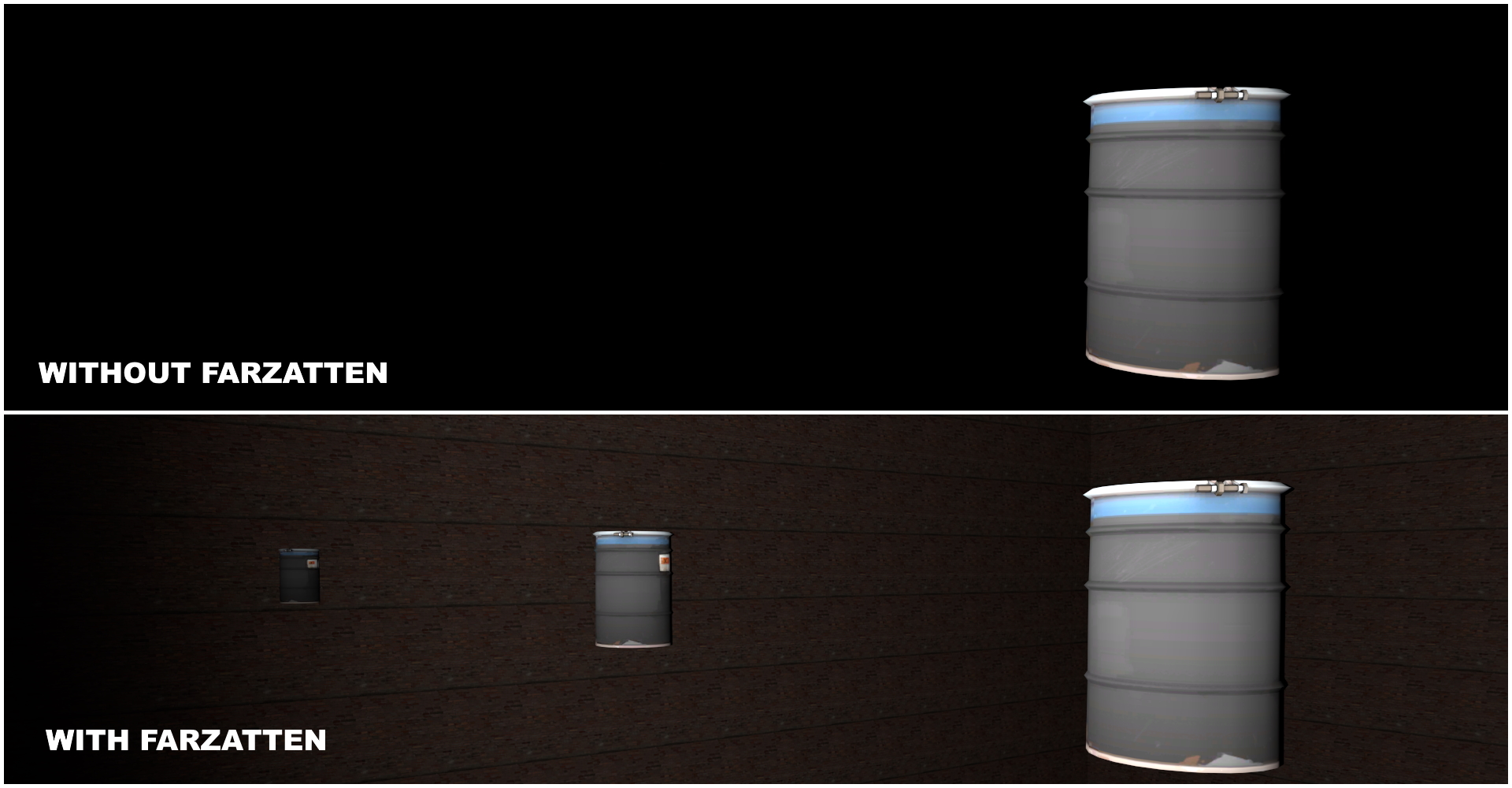 As you can see, without using farZAtten, we can’t even see the second and third barrels. However, after using a remapped farZAtten, not only can we see those barrels, but we can also see the walls past the barrels. The light’s brightness dropoff is also reduced. I have no clue why.

Im sure someone has a much better explanation for how farZAtten works, but in my experience this is all I have used it for.

nearEdge and farEdge don’t seem to do anything for standard lights in SFM. However, if you change the light to an Uber light, they will create a fade effect when using minDistance and maxDistance.

Once again, like nearEdge and farEdge, these two settings don’t seem to do anything for standard lights. But for Uber lights, they will change the bounds of the light’s distance, much like minDistance and maxDistance.
However, unlike minDistance and maxDistance, nearEdge and farEdge can light portions of an object. Meaning that SFM will not check to see if any part of the object is in the light’s path then light the whole object. Instead it will just light whatever portion of the model is in the light’s bounds, and only those parts.

Volumetric lights create that “foggy” effect in scenes. There are multiple ways to change the “fogginess” or the “dustiness” of the light

Like before, these two settings don’t seem to do anything for standard lights. However, for Uber lights, they can be used to create rectangular lights when used in conjunction with horizontalFOV and verticalFOV.

Once again, edgeWidth and edgeHeight don’t seem to do anything for standard lights. However, for Uber lights, they will define the fade on the edges of the light, similar to how nearEdge and farEdge work.

This guide merely describes what each slider does, it is up to you to experiment with the multitude of settings to find what looks best. There isn’t really any specifically set formula for good lighting. Different styles and themes will dictate different lighting. If you need some basic pointers on how to use lights to properly light a scene, you can check out my other guides https://steamcommunity.com/id/sh4z1/myworkshopfiles/?section=guides.

I hope this guide helped you understand the different light sliders better, good luck on your future SFM projects 🙂

Hope you enjoy the post for Source Filmmaker Each Light Setting and What it Does, If you think we should update the post or something is wrong please let us know via comment and we will fix it how fast as possible! Thank you and have a great day!