A druid build centered around DEX skills and area affect. Relies heavily upon the critical generated by the Overgrowth card followed by Wind area affect skills. The build is aimed at regular and effective use of the Tornado card.

The core cards for this build are Wind Blast and Overgrowth. Because of this the obvious base class is Forest Seer as it has a Wind Blast. I tried this. It worked. It was fun. However, I’ve actually found that the addition of a few strength based skills make the class more versatile. In early game before you get all of the core build cards, Swipe is handy. Hurl Javelin turned out to be even more so such that I’ve kept them in the build and upgrade them when my other upgrades are complete. Thus, I recommend Druid as the base class for the Wind and Root build.


EDIT: At 28th level I finally put all my STR cards away, even my beloved Hurl Javelin, because they were no longer necessary, had lost a great deal of their effectiveness due to low STR and they were sometimes messing up my draw. My first hand draw is/was 12 cards out of 18, but with two of those being Hurl Javelin I sometimes didn’t have some other critical card to my play style. With only 16 cards in my deck, none of which are hurl Javelin, I now pull my required cards on most draws. 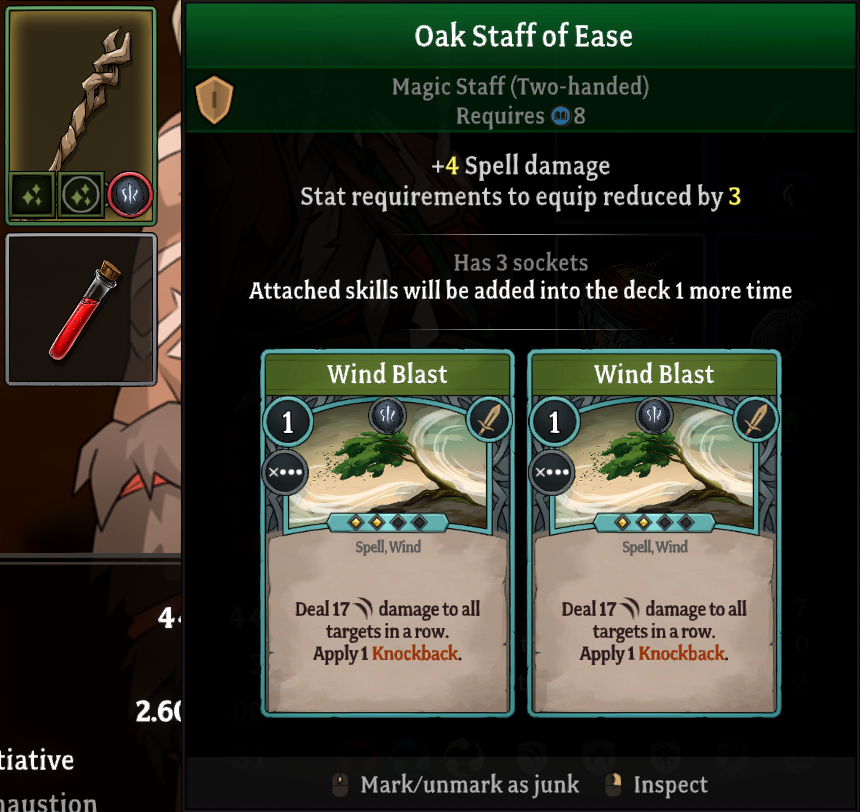 Regardless of the class I play, I focus on purchasing card enhancing runes every time I can. Because I don’t like enhancing a whole bunch of cards, I prioritize Mirror and a weapon that can house two skills.


On the Ida Wind and Root Build I’m looking for Wind Blast, Overgrowth and Tornado when selecting new cards. All three are on the Elemental tree. I may change my opinion later when I’ve played deeper into the game but my current belief is that two each of Wind Blast and Overgrowth are enough. A single Tornado is all you’re AP and channel can handle. As you can see, I’ve put both my Wind Blast on my staff with a Mirror rune giving me four upgraded cards. Ida is only seventeenth level in all of these screen shots.


On my current run/build I drew Tornado before I drew any of my other required cards. Because that draw seems rare, I kept it but took it out of active play until such a time that I can generate more AP.

Early game combat can go one of two ways depending on what skills you draw first. If you get Wind Blast first you’ll be doing modest damage to everyone in a row with said skill. Watch out for thorns and put up some defense if needed before casting. A whole row of thorns can be devastating to an unprepared Wind Druid.


If you manage to get Overgrowth in your deck before Wind Blast cast Overgrowth and follow up with a Hurl Javelin or Swipe. Do whatever you can to increase your AP or decrease Overgrowth AP cost. I lucked into an item with Surge on it and use Mirror (white rune) and Memory (red rune) to get two extra AP on my first draw. I’ve also used some leather gloves that came with Hidden Blade on it to generate extra AP. I then whittled down my deck such that I had a high probability of drawing Overgrowth on the first draw and proceeded to seriously thin out the enemy lines by first casting Overgrowth followed by Hurl Javelin(s) and Swipe(s). Once I had Wind Blast I follow Overgrowth with Wind Blast(s) and often clear the field before my companions get a round.

A Note on Camping


In case there are others that haven’t figured out camping, here is my sequence.

4) Repeat steps 2 and 3 until all tents pitched

13) Put Ida (and anyone else not sleeping) to bed

Once you have a four Wind Blasts (whether because you have four cards or because you’ve Mirrored them like me) and two Overgrowth cards combat becomes Overgrowth followed by Wind Blast. Enemies and environmental hazards (cactus) with thorns have proven to the the only thing that require caution. In such cases, try to put up a little guard or be selective using Hurl Javelin or some other attack in place of Wind Blast. Honestly though, if you’ve made it this far, you probably don’t need my suggestions. Use Memory (red) runes and any tactic you can think of (see the Battle Rouse skill) to increase the probability of getting a high AP first round with at least one Overgrowth and one (preferably two) Wind Blasts. Keep you hand small if you must – I tend to.

I don’t have a lot of defense on Ida the Wind and Root Druid during the easier parts of the run. However, when the going gets tough, I start swapping in Dodge, Barkskin and my favorite, Wall of Thorns.


Bark Skin is a 1 SP defense, making it ideal as Ida generates a lot of SP and only rarely needs to use it to reposition on the field. It’s also STR skill. This isn’t as bad as INT as Ida (starting from Druid) will likely have a little STR but I still prefer it with a Lesser Grace rune.


Wall of Thorns is a channel skill. I’ve talked about generating channel in the Combat section of this guide. It’s also a INT skill, thus, even more urgent than Bark Skin, put a Lesser Grace rune on it. Another ‘good’ enhancement is anything that reduces it’s AP (channel or runes).


However, to be honest, the dodge skill does just fine and it’s DEX based and ‘free’ with the Druid base class. If I upgrade it at all, I upgrade only one and, you guessed it, put it on a Mirror rune if need be. Because dodge works and because it’s free Bark Skin and Wall of Thorns should not be a priority when drawing new cards.

I’m eager to use Tornado on a regular basis. This requires a lot of channel. Channel can easily be had from the Bard, however, if you’re not running the Bard Focus runes pared with regularly used skills can be helpful. Someday I’ll modify my Wind Blast staff specifically so I can have both a Mirror and a Focus rune on it.


Tornado cast requirements can also be reduced by casting other Wind Spells (such as Wind Blast) ahead of it. Do this. 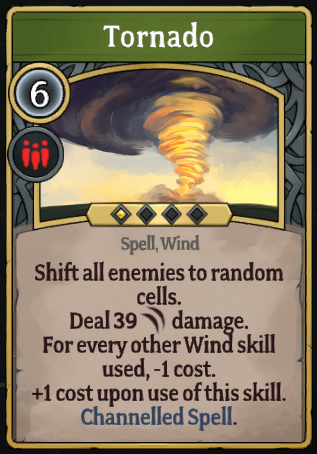 Ida is now 28th level. I started regularly using Tornado a few levels ago. It’s every bit as awesome as I hoped. However, to be effective Ida needed the Natural State card from the Elemental deck. I’ve also, just recently mastered Tornado to use Agility charges in addition to supplement channel charges, AP and other wind usages to lower AP.

The following are the Talents I’ve selected thus far (Ida is now 28th level). They’ve been effective. My goal has been a large first hand draw.

4. Observant (+2 to ALL ability challenges, +4 initiative)

– Nothing Ida qualified for at this point really stood out as being needed, thus my selection

– 1st turn I don’t have agility charges which is when I find a large card draw most critical. At 28th level my first turn draw is 12 out of 18 cards.

Snake Bite is a DEX based Elemental Card. You will see it in your draws when you are trying to get Wind Blast, Overgrowth and Tornado. It’s a so-so card for this build. It adds variety but takes space. Because it’s a poison skill it does not take advantage of the crit generated by Overgrowth, but it will do a lot of poison damage because Ida will be DEX based so – it’s fun to play with but can mess up your draw. If you like variety, (like I do) go for it but it will hamper the build slightly.


There’s a Wind Gust skill that is a retain ‘melee’ skill. I find it frustrating early game and I don’t know if it’ll count towards my Tornado AP cost reduction count. I’ve saved it in my ‘unused’ portion of my deck to try out someday.


EDIT: Wind Gust does indeed help lower the cost of Tornado if Wind Gust has been activated during the round. However, despite having the melee tag Wind Gust will also activate when using Wing Blast or Hurl Javelin. Note that if Ida activates Wind Gust with Wind Blast one mob will be pushed back two spaces rather than one. Because two wind cards were played at once, the cost of Tornado goes down by two.


Tree Step is surprisingly good for the Wind and Root Druid build because of the DEX focus except – Ida rarely needs healing.


I’ve not yet had the opportunity to try Wisdom of the Lands (generates channel – might work well in conjunction with Overgrowth or Snake Bite) and Natures Bounty (I rarely get to a second combat round with this build unless it’s a boss fight or a multi-wave fight) but it looks intriguing. 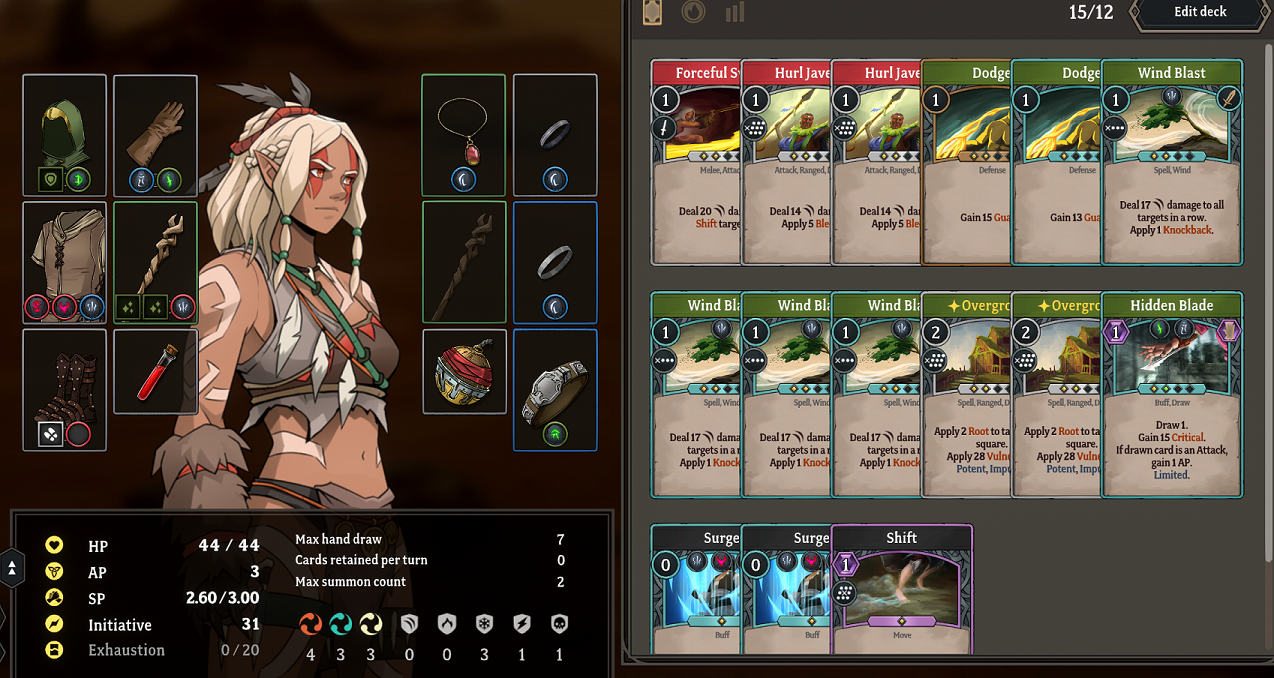 Hope you enjoy the post for Gordian Quest Druid Build +Base Class Selection – Early Game, If you think we should update the post or something is wrong please let us know via comment and we will fix it how fast as possible! Thank you and have a great day!