Ida is supposed to be a druid. However, with the right application of Primal and Elemental cards she can play more like a barbarian. The rage comes in the form of all the fire she generates.

This build came about as an accident. I was hoping to build a Eathshaker Druid based off of the earthquake cards in the Elemental deck. However, I simply couldn’t get the draws I wanted and kept getting Molten Rock cards. I started selecting these and ‘stumbled’ into a rather fun melee tank-damage build. 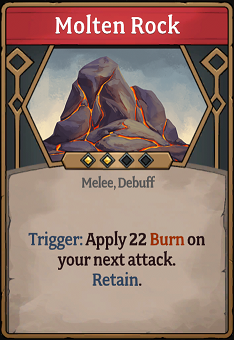 The Barbarian in the Raging Barbarian comes from the melee Primal cards in this build. The Raging perhaps should’ve been Flaming but comes from the addition of the Molten Rock card. Related Elemental cards I’ve not added to this deck (but may be effective) are Volcano, Molten Lava and Nature’s Ire. I can see Nature’s Ire, in particular, being particularly effective against bosses.

There was one, and that one was…


Oh, this is a different story. Okay. Sorry about that.


So, for this build I started Ida as a Forest Defender. As I said in the intro I was going for an Earthshaker build. Part of my reasoning for the Earthshaker build was I figured the developers must’ve had something in mind for the Seismic Shatter cards that thus far I’ve personally found to be only useful by accident. For the Raging Barbarian build I’ve ditched those two starting cards but kept all others. The ‘trump’ card for this build is Head Pummel. One of these is available immediately from the base Forest Defender. The Swipe card is very useful as well; two or three will be available with the base Forest Defender. 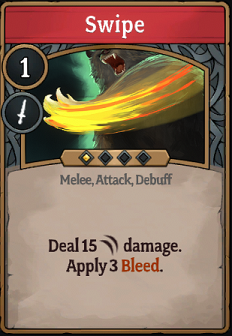 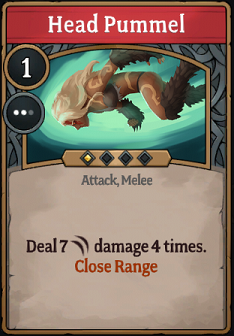 I found the Raging Barbarian build had a slightly slow start but not nearly so slow as my Wind and Root Druid (see my other guide). This might’ve been because I was trying to get different cards originally. However, even before I found the first way-point in Act 1 Ida was getting at least half the kills. Her biggest handicap is that I’ve currently paired her with two DEX based characters that have higher initiative than she.


As I mentioned in my Wind and Root Druid guide, one of the first priorities is the acquisition of runes. Like the Wind and Root Druid, the best rune in my ‘opinion’ is Mirror; at least early game. This is so you can upgrade only a few cards and yet have more than one upgraded card in your hand.


The first card you want to add to your deck is Molten Rock. As a base card the 18 Burn damage is significant and it upgrades quite well. If you are like me and find playing small, predictable decks less aggravating you need no more than two. One, upgraded, and placed on an item with Mirror will serve very well.


After you have a Molten Rock (or two) you can then concentrate on all the fun Primal STR (red) combat cards. There are many, and they all work well with the build. The only one I’ve avoided is Primal Aspect because, well, in this build I’ve decided to not make Ida a bear. However, be attentive to your ratio of attack vs. defensive skills and your attack AP requirements. Many of Ida’s awesome STR (red) cards require two AP. Drawing one two AP card when you only have three AP to play with on any given draw isn’t a bad thing but drawing a full hand of two AP cards will likely delay Ida’s eventual victory.

Ida’s a primal barbarian in this build with flaming rage. All of her potential cards (except maybe Nature’s Ire) are red STR cards. Raw Strength (+4 STR) was my first talent. I followed this with Limit break for the +1 Max SP. Ida generates and uses SP rapidly in this build. If you’ve read my Wind and Root Druid guide, you’ll know I’m a big fan of large card draws so Battle Rouse (+1 max Fury and +1 card draw on first turn) is next. With a few judiciously placed Fury Runes you can generate that fury too.

Everybody wants more AP. I lucked into Mage Burn early. Mage Burn seems like it should be a Mage item but it generates more AP and the card’s not bad for this build either. Go figure. 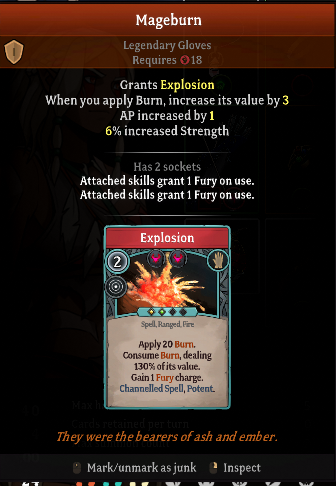 Once I had 4 AP, some of those other 2 AP red STR cards in Ida’s Primal tree started looking quite appealing. Keep your eyes open for items that generate extra AP.


If you don’t know, you’ll eventually be able to generate more AP from your Skill Points tree. Another tactic is to reduce AP requirements using the runes. Efficacy (blue) will reduce the AP cost of a skill on first use and Gambit (white) will change a skill cost from AP to SP; just be careful you don’t have too many SP skills or you’ll find yourself limited that way. Lastly, pay attention to if a skill can have it’s cost reduced by, say, an Agility, Might or even Channel charge. If it can, you might consider ways to generate those. I’ve kept Feral Leap in my hand (a base Forest Defender card) for that reason.

Ida the Raging Barbarian’s specialty is doing a large amount of damage to a single target. She rocks against bosses and tanks. She’s not so great at sweeping the field of peons (that’s Ida the Wind and Root Druid’s strength). In the case where there are a lot of peons to take out, focus on the high defense, high health ones first otherwise that Molten Rock card you drew will be wasted. Keep, note, however, when a mob is still standing but it’s burn damage is enough to take it down such that Ida can switch her focus to a new mob.

There are no good defense cards in this build. You might draw a Bark Skin while looking for Molten Rock in the Elemental tree but no other defense cards in Ida’s deck(s) are STR based. So unless you’re feeling lucky, don’t lose those Block cards that are available from the base Forest Defender class.

This guide has focused on Ida being all STR melee. Furthermore, I like play better with a small deck. However, there a few DEX melee options for Ida. One is Feral Leap, another is Flurry off Swipes.


Flurry of Swipes can do huge damage with the addition of Agility charges and there are many, many ways for Ida to generate these and, strangely, only a few ways for her to consume them. Putting a rank in the Purposeful Motion talent/skill might be a good way to utilize that and other green DEX cards with this build if you are a person that likes playing with a big deck. This would also give you more defense options such as Thornwall on the Elemental tree.

A Note on Deck Building

I’m very new to deck building games, so, take the following advice with a grain of salt.


I like small decks and large draws for the following reason: the draw is predictable. The drawback is variation in play, you end up playing the same three or four cards over and over and over again.


Yet, there is nothing worse than a bad draw. When every enemy on the field is defending and all you draw are defense and support cards – well, that was a wasted turn, especially if your SP was already full. Alternatively, if that big bad dude with a lot of health that you can’t quite bring down is winding up for a game changing blow and you’ve no defense cards and no means to get out of the way, well that sucks too.


I’ve found the correct ratio of defense to attack to be roughly AP-1 attack cards for every 1 defense card. This ratio gets screwed up though if you have a lot of support cards like Molten Rock or all those ranger 0 AP arrow modification cards (assuming you’re playing the ranger).


Furthermore, my little ratio formula breaks down if you have a large deck compared to your draw. If your draw is 5 cards and your deck is 25 cards, you seriously risk all attack cards when you need a defense card. Alternatively, if you up the defense cards, there are going to be many times Ida (or whomever) sits there twiddling her thumbs when there’s a 2 health mob just sitting there on deck for her to poke in the eye.


My ideal deck tends to be in the 12 to 15 card range and my ideal draw at least 50% of that. On my Wind and Root build I run 16 cards with a 12 card draw. On this build I’m thus far running 13 cards with the default draw (+1 on first turn)…I sometimes end up with all defense or all attack cards.

Here we come to an end for Gordian Quest Character & Classes Information Guide hope you enjoy it. If you think we forget something to include or we should make an update to the post let us know via comment, and we will fix it asap! Thanks and have a great day!