A build meant to embody the martial philosophy of the NCR the same way that Legate Lanius does for The Legion.

The Hero is strong from lugging heavy packages across the wastes, all while carrying his guns and ammo.

The hero’s senses are pretty average.

With the perception implant you’ll be able to get the Better Criticals perk.

The hero can take a lot of punishment before going down.

You’ll be able to get all except for one implant, I recommend skipping the regeneration implant.

The hero has social difficulties which could stem from autism, or maybe brain damage.

In any event: the hero rely more on his own firepower rather than companions for dealing with enemies, and is more likely to attempt tanking damage himself rather than expecting companions to.

If you don’t like using companions at all you could instead put two of the points from here into something else.

The hero isn’t the smartest guy around, but he do know how to take care of his equipment.

The hero of the west is as agile as he needs to be.

The hero aims to hit his targets where it hurts.

With the luck implant and the extra point from completing the Lonesome Road dlc you can get 10 luck.

The first perk we’re going to get require 30 points in the Guns skill, and this build is all about guns and explosives.

Our second perk require 30 points in Explosives, explosives are one of the build’s main factors, and the Ghost Town Gunfight quest has an explosives skill check.

There is a 9mm submachinegun you can repair in Doc Mitchell’s house, high repair helps you maintain your guns and armor, and some of our perk choices require high repair, Jury Rigging being the most notable.

The higher critical hit chance is well worth the faster equipment decay, after all Jury Rigging compensates for any inconvenience from this trait.

I recommend taking this build in the beginning, and later replace it at the auto doc in Old World Blues once you’ve built up the relavant skills for this build.

Gives a damage bonus when you reach low health, at the cost of your perception and agility stats.

If you prefer maxing out your carrying capacity you can take this instead of Hot Blooded.

This trait will give +25 carrying capacity but reduce your SPECIAL stats when carrying less than 160 lbs.

With this trait the build would have a maximum carrying capacity of 375 lbs.

Note: italics denote the requirements for the perk.

As a true gun nut the hero of the west has a lot of practice loading guns.

The hero has a good throwing arm, making him able to frag enemies from a good distance.

Caesar’s boys might think they are better in close quarters than those who rely on guns, until a 12 gauge shotgun blast blows their head off!

Shotguns will be our main weapon for close combat.

This perk allow you to not only draw your weapon fast in a pinch, but also change weapon weapon quickly to adapt to the situation.

The hero is one of the best couriers the Mojave Express has ever seen, in no small part thanks to his ability to carry a lot of stuff.

The strength of his back is without question.

Gives your shotgun blasts a chance to knock opponents down, making them unable to fight back until they can get back up.

The hero of the west embody the martial philosophy of the NCR, and thus Grunt is a no brainer.

Will give a damage boost to frag grenades, the light machinegun, and some other weapons that might go well with this build.

Knowing how to effectively make improvised explosives ensures that the hero will always have superior firepower!

The hero won’t fall easily, he is strong, tough, and used to stand his ground, wether it’s against robbers or wasteland creatures.

Following the gun nut theme the hero don’t let spent casings go to waste, and sometimes hand loads bullets to his own specifications.

There is something poetic about killing a legion assassin with a shotgun shell packed with legion coin.

Careful packing allows the hero to carry more grenades, ammo, and other stuff, and helps him be a good courier.

One of the most practical perks in the game, making maintenance of equipment easy.

The hero has spent a lot of time on the trail, where the only one who could maintain his gear was himself, he sometimes had to find creative ways to keep his gear working, after all the last thing you want when being charged by a pack of nightstalkers is for your gun to jam.

Gives a much higher critical hit chance, making it one of the best combat perks.

Makes your criticals do more damage.

The hero carry many burdens wether physical or mental.

Makes heavy weapons weigh only half as much as usual, great for two of the recommended weapons.

One of the recommended weapons for this build is a machinegun, and another is the liberal use of explosives.

You don’t wanna have to stop hosing down enemies with your gun because your companion suddenly decided they should run in between you and your target, nor do you want to accidentally blow them up.

The hero knows how to duck and cover, and won’t be easy to blow up.

With 3 ranks of Demolitions Expert the hero will do a lot of damage with his grenades, and any other explosive weapons he might get his hands on.

The hero is one tough bastard.

Gives you more maximum hitpoints depending on how high your karma is when you get it, and all your attacks do more damage.

Together with the strength implant this will give the hero 10 strength.


All implants except regeneration

You can get every implant except for one, I recommend making that one regeneration. 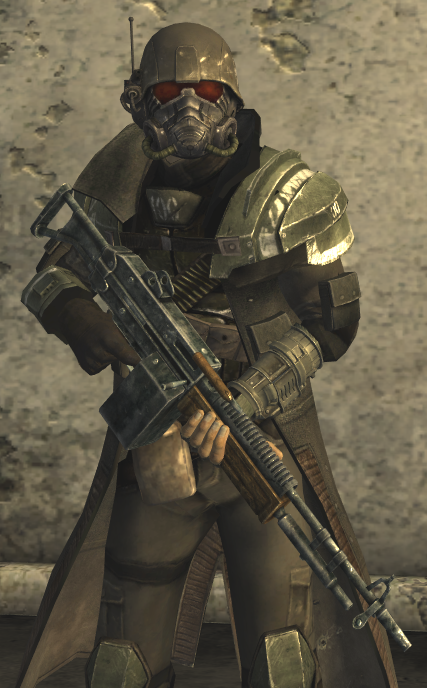 Apart from making the hero of the west look like an NCR veteran ranger and a heavy trooper had an even more badass child, the elite riot gear gives a +5 critical chance, a point of charisma and a bonus to the guns skill.

The helmet gives +2 perception, a bonus to speech, and a type of night vision when sneaking, plus it looks cooler and gives better protection.

Alternatively the beret will giv +1 perception and a +5 bonus to critical hit chance.

There is actually a bug in the game where you can wear both the helmet and the beret at the same time, getting the bonuses of both, but that is clearly a mistake and looks stupid as hell, I just wanted to mention it so that nobody try to helpfully point it out to me.


Any Glasses (optional, & only with the beret)

If you decide to wear the beret for the extra critical you could wear a pair of glasses or sunglasses.

Noteworthy choices include Mobius’ Glasses for their +10 bonus to explosives and +2 to intelligence.

Another good choice would have been the Lucky Shades, but that would require getting a positive reputation with Caesar’s Legion, which goes against the spirit of this character build.

If you decide to get the Lucky Shades anyway you could put the point from completing the Lonesome Road dlc into something other than luck.

When given the expanded magazine the light machinegun can keep shooting for an impressive amount of time, even with its high rate of fire, the result is that it’s a good weaopon wether dealing with many weak enemies or few strong enemies.

A powerful rapid-fire semi-automatic shotgun, great for dealing with enemies at close range.

This powerful .50 sniper rifle will be surprisingly light with the carbon fiber mod and Heavyweight perk.

Able to fire explosive rounds, this gun can take down just about anyone and anything before they even know what’s happening.

I once killed the entirety of the mercenary gang that’s replaced with aliens when you have the Wild Wasteland trait with only one shot of the explosive round.

It was very satisfying.

You can do basically whatever you prefer.

This build has a high carrying capacity so you could probably make off with a lot gold.

I would say that fighting the White Legs make the most sense for this build, the White Legs’ relationship with Caesar’s Legion is reason enough.

The fate of Salt Upon Wounds I leave up to you, the same goes for the companion quests.

You can do whatever you prefer.

It would make the most sense to either bomb Caesar’s Legion or stop the launch.

I leave Ulysses’ fate up to you.

There is only one ending that fit this build: the NCR ending.

This build was designed to embody the martial philosophy of the NCR the same way that Legate Lanius do for yhe legion, and I imagined this character to be an overly patriotic californian, and doing whatever benefits the NCR the most, even at the cost of those not of the republic.

This will inevitably mean that the Hero of the West will become a fierce enemy of Caesar’s Legion.

I hope you enjoyed the build, it feels fitting that after publishing a samurai build this one is very ”murica!”

If this one seems to be of worse quality than the samurai build then that’s because I wrote this one way before I wrote the samurai, and didn’t feel like rewriting it.


This build was inspired by some of Ulysses’ lines in the Lonesome Road dlc.


I was originally going to call it the Champion of the West, but felt Hero was a more fitting counterpart to Lanius’ Monster of the East.


This is the fourth build I’ve published and will probably be the last, at least for any forseeable future.

It was originally going to be the third, but I deleted the character I used for it by mistake.


Feel free to tell me what you think in the comments, constructive criticism is welcome.

Hope you enjoy the post for Fallout: New Vegas All Build – Tagged Skills – Traits & Perks Guide, If you think we should update the post or something is wrong please let us know via comment and we will fix it how fast as possible! Thank you and have a great day!