This guide will help you set up your building, development and fighting. It will help you mold your mindset to adapt in any situation.

I am long time player, started with EU3 and worked my way into playing EU4 with 5000hrs now.

Reason I wanted to write this is because I feel it will benefit players that love playing the game but feel that their efficiency can be raised.


Meaning you have good knowledge of game mechanics, but for one reason or another, you dont do so well, leading to restarts or ragequits.


This guide is mostly for people who intend to play MP, but are cynical about META.

Reason you feel you are behind is because you are building up military and not economy. Let me give you an example. Starting out as a 100-150 dev nation? Why? Because of great ideas, right? Okay, so, what do you need to develop properly? Mana points and consequentially cash.


How do you get mana points? By hiring advisors (they can go up to lvl5, see the star icon) or going republic with 3 year cycle (Getting 6-6-6 presidents all the time, with military focus, you can pay the republican tradition). Hiring advisors meaning more cash. Therefore, unless you are seriously threatened by AI or player, all you cash should go to advisors and buildings. Always take advisor discount (in national ideas, events, policies, priviledges) because you want to hit lvl5 advisors ASAP (Try to stack 80-90%). Now, what buildings to build?

0. If you are playing as Prussia, or something specific, Courthouse goes everywhere. (because you need gov. capacity)

1. Find Trade Center-TC (or Estuary) on trade map. Build Marketplace there and only there. Always upgrade TC to lvl2 for 200 ducats. Lvl3 only in 5 city states.

8. Whatever is second from point 7

9. Do you need forcelimit (camp) or cash (church)? I would strongly recommend avoiding raising force limit. Why? Because more force limit means you will need more money to drill entire force limit, and drilling gives you only 1% per year. There is no way around it.

10. Whatever is second from point 9


Now let me be clear about one more thing, double bonuses from specific Manufactories are nice, but you dont need them if you have cash. Only thing to consider is whether to build Ramparts or Soldier households in gold mines, which depends on whether you can stack +1 attrition from defensive ideas or not. I would recommend going with Soldier Households and developing your gold mine 1-10-10

In order to even discuss developing, you need to have a good and balanced mana generation. I remember when I started I was using my National Focus to whatever idea group I am researching right now. This might seem as a good idea, but lets think about it. What idea groups are you playing with?


In general, never mind the SP vs MP. I can bet you are generally doing 3 admin and 3 military ideas at least. Great, I wont get into what they are. So it means that your Admin will be spent on ideas, centralising, and on coring, as it should. Your diplo will go on ideas and developing, and your mil will go on ideas, developing, government power, and generals etc.


Meaning that there is a bias toward mil your entire campaign. I would recommend you do mil focus on day 1, and just go with it. That sounds silly, but the extra points will make quantity ideas irrelevant.


As much as I dont like Zlewwik, he is on point about development. Every mil development click is very valuable. He recommends to do 1-9-11 dev in your provinces, sorting them by cost. I would just add that the cost would be my 2nd pick, if I started out small. I would definitely pick most efficient provinces first, and then the lowest cost second.


And if you remember that, even high dev regions in the world have most of their dev in admin, and not in manpower. I would for those regions even recommend exploiting dev, to shift the dev to production/manpower.

Rather straightforward. Find a trade node with least amount of naturally outgoing (downstream) nodes. Good examples (beside 3 end nodes) are Constantinople, Lubeck, Novgorod etc. Then collect in that node.


You are automatically collecting in your home node, dont forget that. If you have a lot of colonies (you dont have to be colonial), meaning provinces in upstream nodes which dont benefit you much directly, you can always consider making them into trade companies.


Now the funny part: Trade companies have this one building that gives you +50% Trade steering. And this increases every ducats you send by that amount. So I had campaigns where making 3 jumps from Kilwa to Cape to Ivory to English channel made me about 2000 ducats. Great Netherlands game.

Best way to practice war is against Xorme AI at this time. I remember exact time I became good at it, and that is during my hour 3000. When I was on 1.30.6 and using now dead mod called BetterAI. It made really insane things, for example, ottoblobs with 2mil men (quantity+offensive). And I won that war. War is 2 things, preparation and action.


In preparation, think about what matters. If you followed the guide so far, you know how to setup your economy to be sustainable whether you are at war or not. You also know that you need forts on defensive terrain (at least 1 on every 50 development). Forts also need to protect something, meaning majority of your development needs to be behind fort zone, and your army should be drilling there (high supply).

In preparation part, I would also add the requirement to manage your army composition properly. For start of the campaign, you either go with 4-6 cav or full infantry. Armies do battle in 2 rows and both rows are limited by current technology combat width. Let me go into more details there, for example.

Combat width for your current tech is 24, and you unlocked cannons. Well, depending on your tech group (eastern tech has access to cossacks) you should fill out your first row with infantry + cavalry. If you are western country you should never do cav except if you are rolling in money and wanna do stackwipes, where you should only go to 4 to 6 cav. If you are playing on eastern tech, you can do 14 infantry 10 cavalry for combat width of 24. Or similar proportions as your combat width rises.

Okay, that covers first row, now the second. In second row, your reserves are there, and your cannons. You should stack cannons in 5 (meaning 5-10-15-20 etc). Why? Because you mostly need cannons to siege.

Or if you are rolling in money, go combat width of cannons (bad idea, but fun). For maximum efficiency, 24-0-24 would be your combat stack as western nation. Lvl 1-2 forts require 5 cannons for max siege ability. Add +5 for every next level… Coming to 25 for lvl 8 (40 for +8 in last age). Making 40-0-40 the ultimate battle stack. Some players recommend to do 1-2 combat stacks with pure infantry 40 stacks around it for reinforcements. That is fine, but debate is open. In preparation part, I would also include that you need to know how to manage your ideas. You will definitely lose men, but the question is can you retrain, and can you minimise losses? That is where land attrition modifier comes into play. Land attrition is what mostly kills your death stacks of 200k men.

Dont do it! Split your armies into templates and keep them close to one another. Picking defensive ideas for -25% attrition will enable you to do longer sieges. Keep your eye onto supply and attrition modifiers.

Stay behind your mountain forts, dont take battles as attacker on defensive terrain. It is dumbest way to lose men. Think about how many ticks a long battle has, and then apply -2, or -4 for terrain. Yuck, even if you win.

So, attack armies to relieve forts or attack on neutral terrain. When you siege an enemy fort, keep your other armies close-by. Always look to have all morale bonuses and discipline bonuses you can get. It is also worth to roll a couple of times if you were unlucky with general pips.

Dont go deep into enemy lands. They will trap you and attack you from behind. Move province by province, prioritising forts as they alone will bring you war score.


When won, I would recommend you go for max cash always, as AI cant manage economy properly, and new lands for you always need time and resources to integrate, dont take lands while doing admin ideas, expand through vassals.


Some of the better wars I had 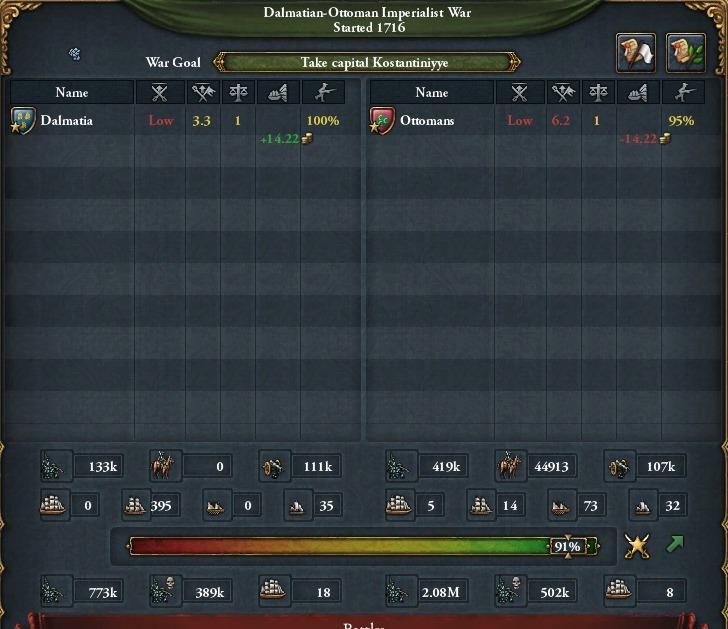 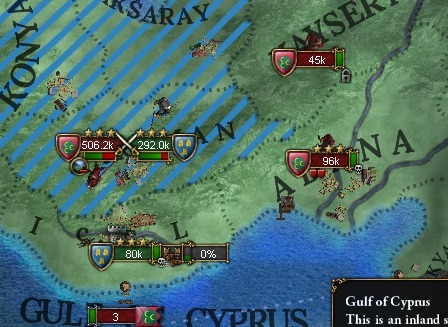 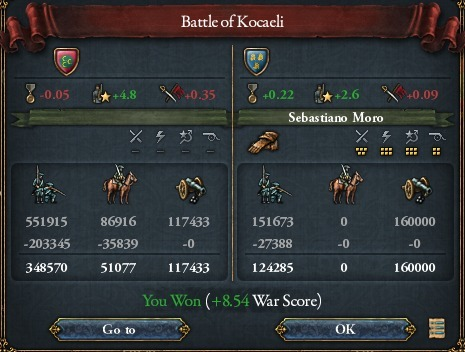 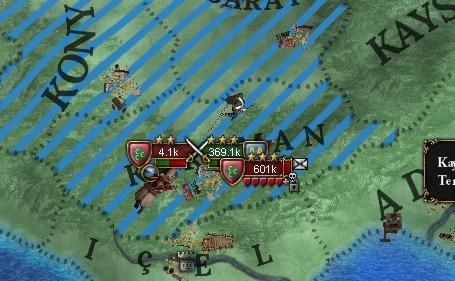 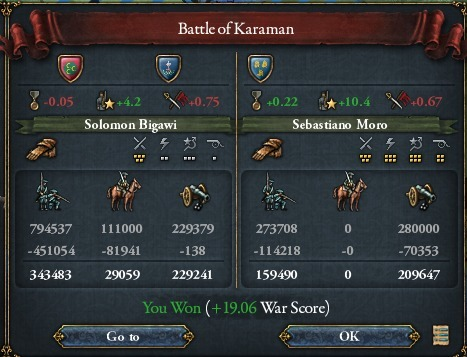 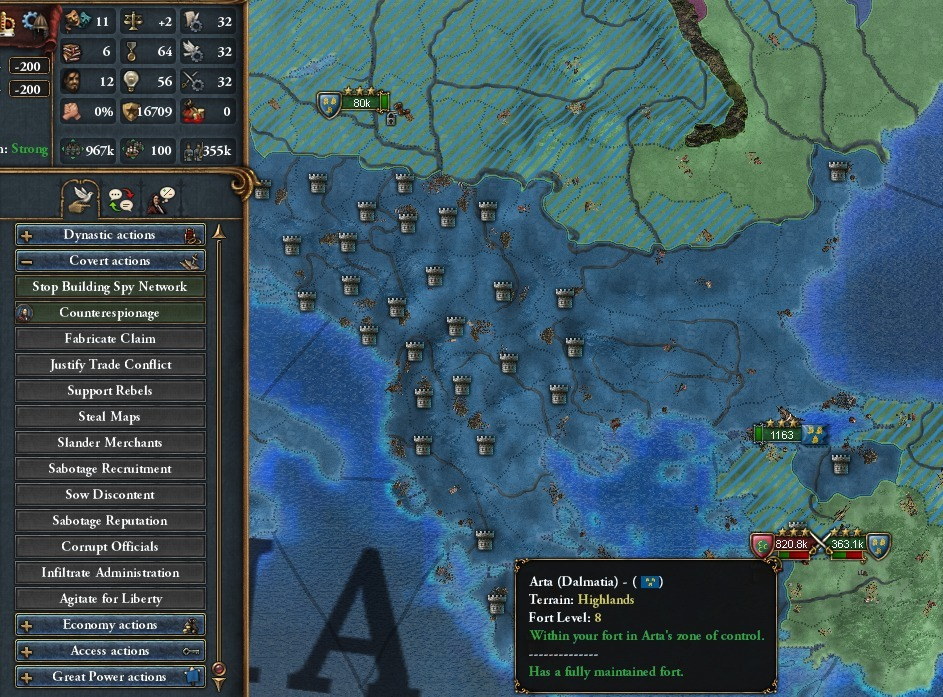 Special thanks to every youtuber that taught me to play this game:


Remans Paradox – For detailed examples of certain tactics and mechanics

Here we come to an end for Europa Universalis IV Building Guide hope you enjoy it. If you think we forget something to include or we should make an update to the post let us know via comment, and we will fix it asap! Thanks and have a great day!