This guide will introduce you a circuit that stop reactor consuming fuels automatically when the sub docked to a powered outpost.

Reactor Off After Docking system(ROAD) is aiming to achieve:


The reactor will automatically stop consuming fuel rods when connected to a powered outpost, but remain working when docked to abandoned outpost or docked by shuttles.


The ROAD system is compatible to official submarines. Which means you can modify your submarine with ROAD system. But if you want to install it in campaign mode, the system will occupy some installations which cause them out of their original function.

All relay circuits are off on default.


First of all, for anyone who need no explanation on the system, here’s the circuit. 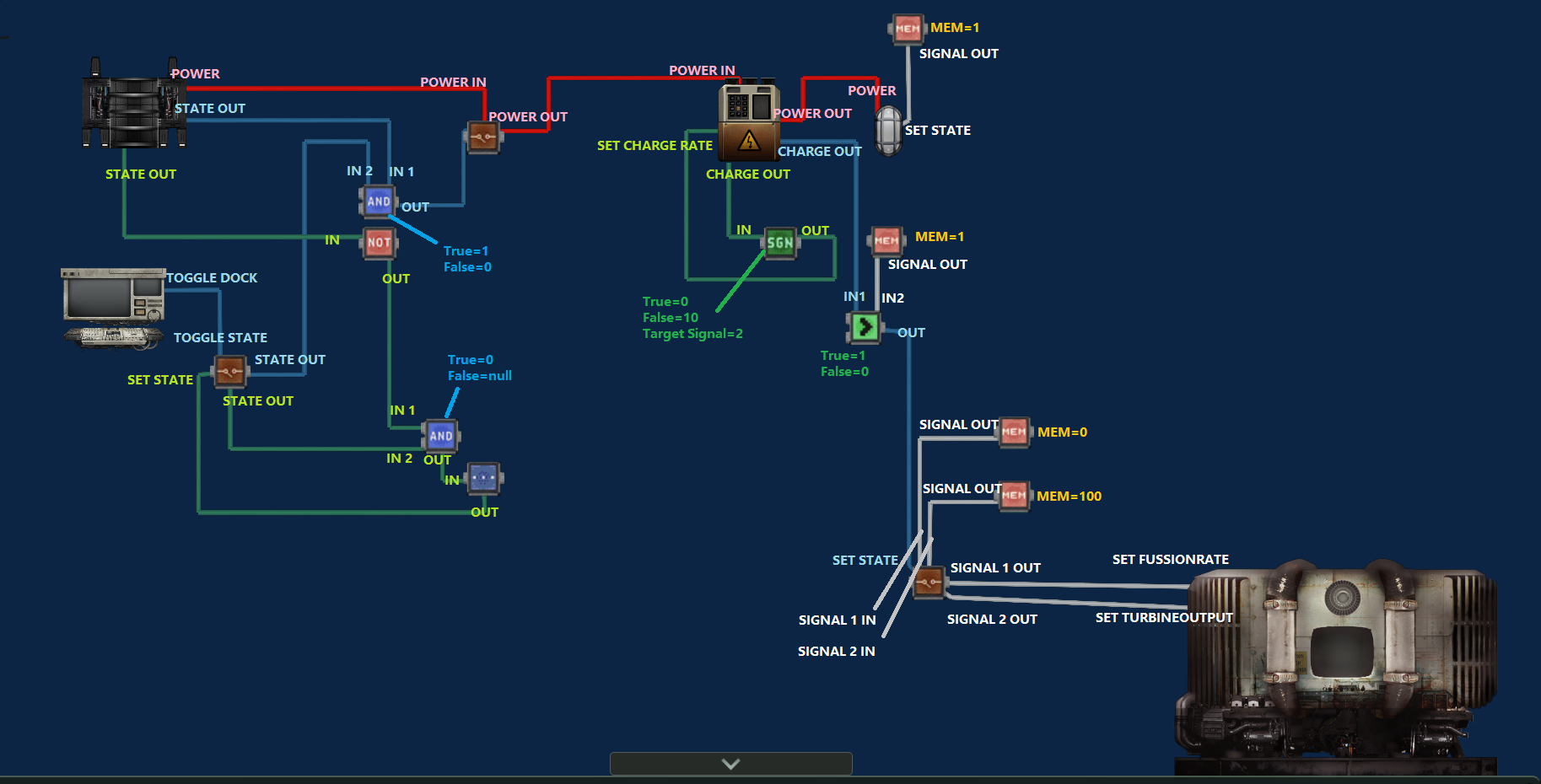 Here is the item a*sembly in workshop.

The following guide will be divided into 3 parts and will be briefly explained. 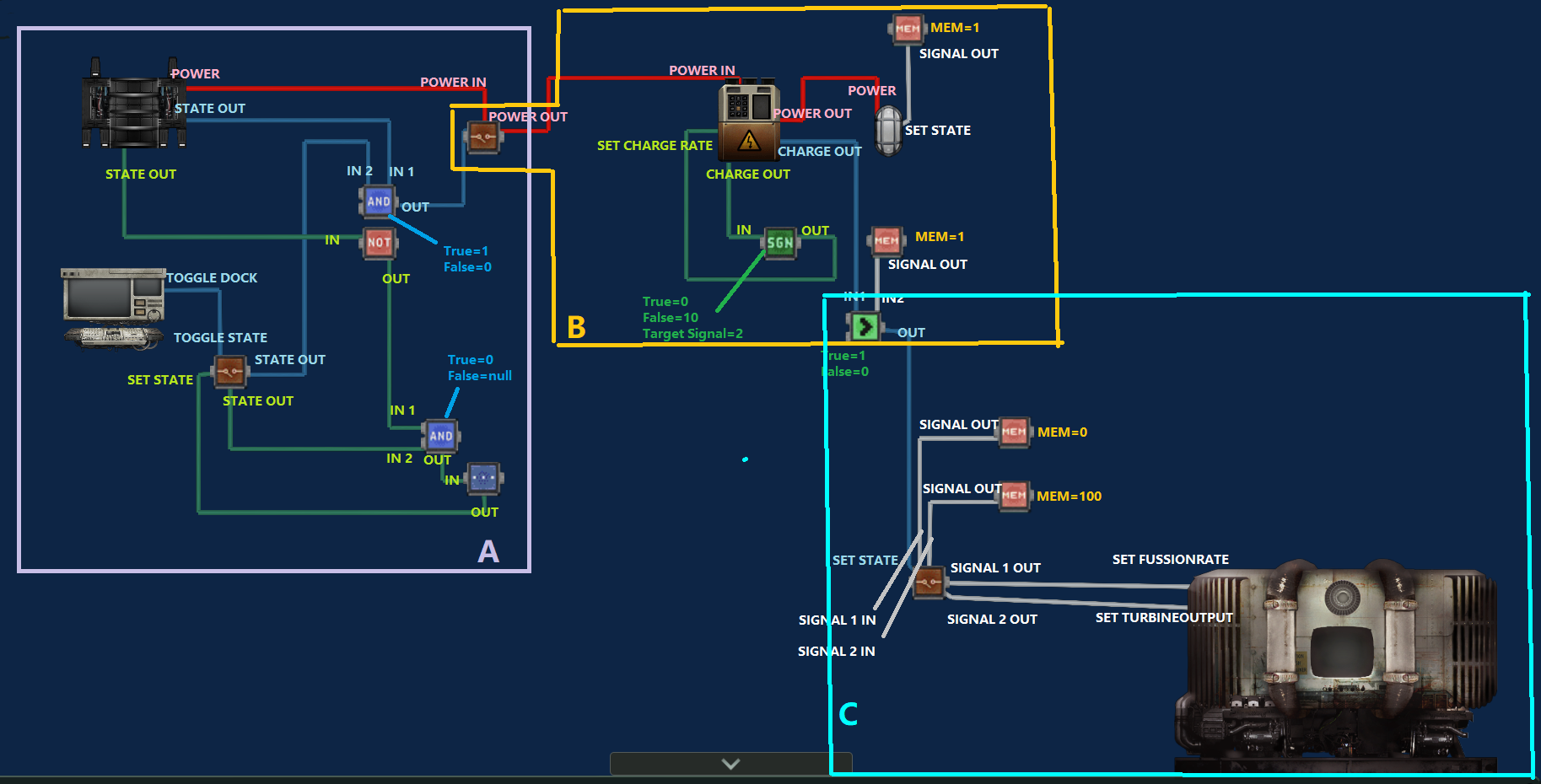 In part A, there is three system: 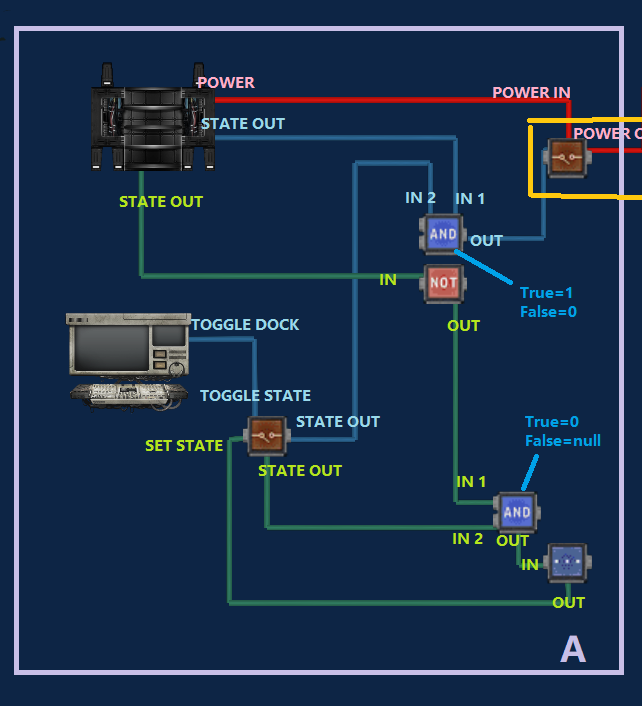 Red wire is power output from the docking hatch. It is independent from the original docking hatch to junction box where the former is for detecting if the target we’re docking to is powered and the latter is for actual power transfer. Details are in Part B.

Circuit in blue wires is a relay that connect or disconnect the power(red wires) and continue the circuit to part B. It basically do this:


IF SIGNAL 1 = 1, SIGNAL 2 = 1, THEN connect the circuit (The docking hatch is opened, and manually docked from sub)

IF SIGNAL 1 = 0, SIGNAL 2 = 0, THEN disconnect the circuit (The docking hatch is closed and do not actively docked)

IF SIGNAL 1 = 1, SIGNAL 2 = 0, THEN disconnect the circuit(The sub’s docking hatch is opened and the sub has been pa*sively docked, which means a shuttle docked to the sub)


BUT, SIGNAL 1 = 0, SIGNAL 2 = 1 could happened during the undocking procedure because of the delay component used on the docking hatch circuit in official submarines.

Circuit in green wires is the circuit that basically detect the SIGNAL 1 = 0, SIGNAL 2 = 1 scenario and eliminate it by setting SIGNAL 2 to 0.


THE DELAY COMPONENT IS ON 5 SECONDS

In part B, there are three systems: 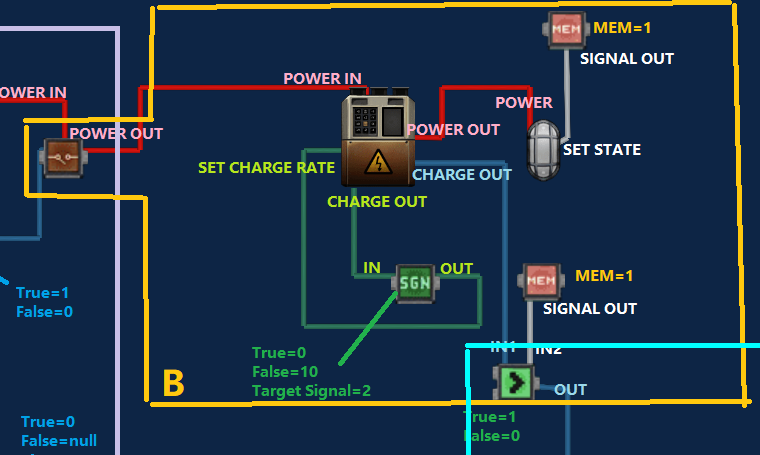 The circuit in red wires transfers power to the battery. The battery are default on 10% charge rate. The power then will be consumed by the lamp. You could use any other method to drain the battery’s power.


The memory component is only for turning the lamp on, free to use any option to keep the lamp on.


If you are building this in Sub Editor, you could set the maximum electricity stored in battery to 5 or something extremely low, and the consumption of lamp extremely high. Then the circuit of green wire in part B could be ignored.

The circuit in Blue wires basically continue the circuit when it detect the battery receives electricity. To avoid rapid output the memory component has been set to 1 instead of 0.

The circuit in green wires are necessary if you want to build the ROAD system in campaign. This circuit stop the battery from charging when the battery stores 2kW power and reset when the power drain below 2kW. This circuit basically make the battery limited the maximum electricity of the battery to avoid the reactor back to work too late after undocking.

In part C there is only one circuit. 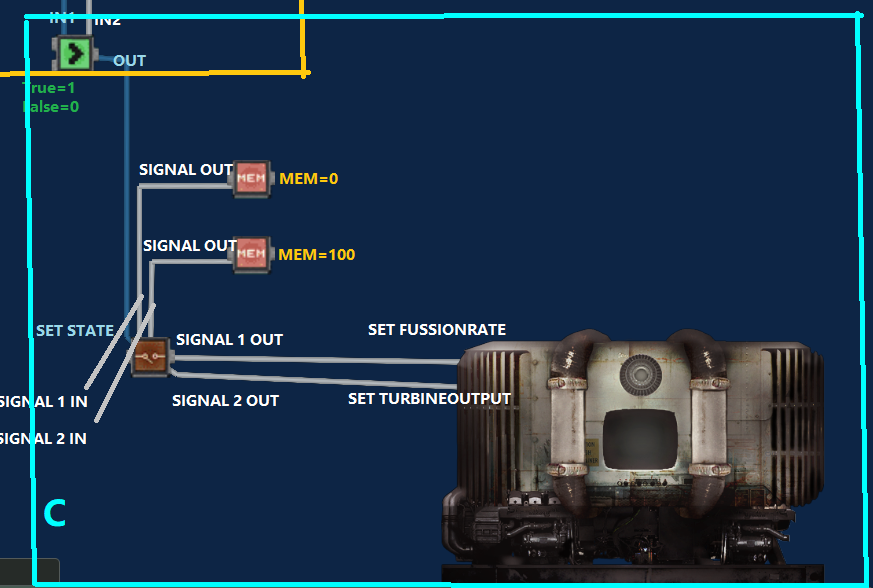 The circuit set Fussion rate to 0 and Turbine output to 100 if turned on.

If you are willing to compatible this system with auto control and meltdown fuse, heres the way to do: 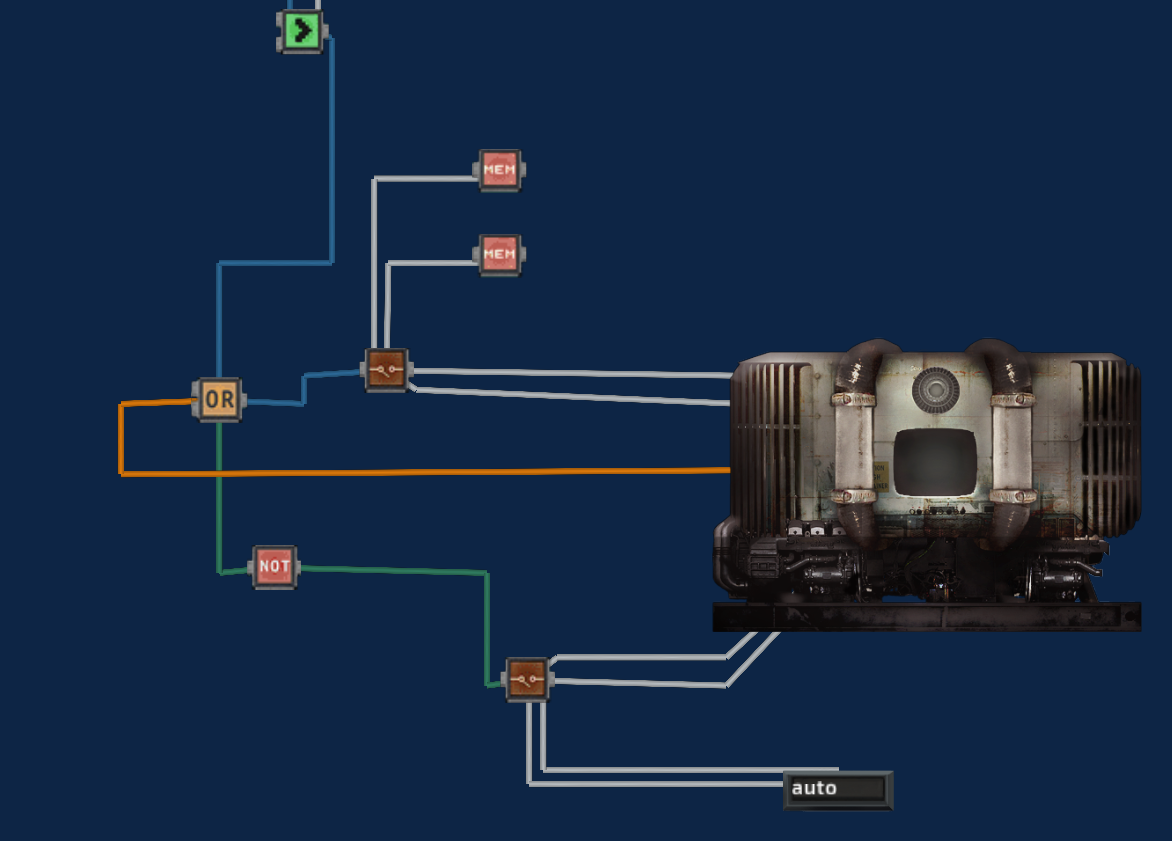 The orange wire is connected to meltdown warning.

Replace the “auto” text monitor with the fussion rate and turbine output of whatever automatic reactor circuit you use.

Here we come to an end for Barotrauma Guide and Tips for Reactor Off After Docking hope you enjoy it. If you think we forget something to include or we should make an update to the post let us know via comment, and we will fix it asap! Thanks and have a great day!