This guide will teach you everything you need to know about gems.

Starting at Uber-1, you get gem boxes. U-1 dungeons gives Beginner’s Gem Boxes, U-2 Gives U-2 Gem boxes, U-3 Gives U-3 gem boxes, and so on till U-9. Starting off, you will want to equip as many gems as you can, the stats do not matter much. Generally, equip the one with the higher pr, as this will come into play in moving up the worlds to get better gems. Do not worry about upgrading gems much until you get U-9 Gem boxes (or U-10 for cosmic gem boxes). Anything past level 15 is a waste of flux and gem dust.

Once you have reached Uber-9 (or Uber-10 for cosmic gems), you will find that you are getting radiant gems, with a rare change of getting stellar gems, usually on karma bar. Feel free to equip the radiant gems if they are better than your current ones, but again, I would recommend not upgrading them much, level 15 at max.


Now here is where it gets trickier.


All smaller gems, (not empowered, Ill touch on those later) can drop as either one star, or 2 stars on them. ONLY USE THE 2 STARS. This only matters for stellar gems that you plan on keeping and not replacing. This matters for a few reasons. The ones with 2 stars will have a higher base pr, as well as higher base stats, and an ability for a third pearl on it once you upgrade it, meaning higher stats.

High uber world gems will drop as either Arcane or Fierce. Arcane means that it is a Magic Damage gem,a and Fierce means it is a Physical Damage gem. On the off change that the damage type does not show already on the gem, this is a way you can see the damage type of it. While you can reroll stats on gems, you CANNOT role a magic damage stat to a physical damage stat, and vice verse. Keep this in mind when farming gems for a specific class. With the exception of building for a Candy Barb tank, every class should be built as a damage class, meaning you want these three stats on the gems:


If a stellar gem has Max Health on it, do not upgrade it. Feel free to equip it for that juicy PR, but just know that it will need to be swapped out later. Once you find a base 2 star stellar gem that has those three stats on, rest easy knowing you have only 7 more gems to get. Yea… 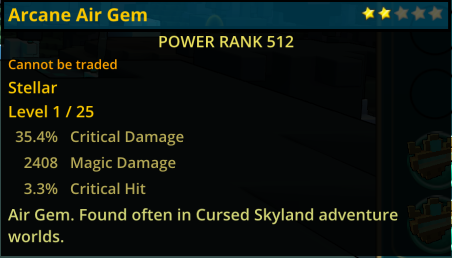 Finding an absolute perfect gem is very very hard, and can be a waste of time, but this knowledge can help when deciding between two gems with the same stats. After opening 3,000 U-9 gem boxes, you will be lucky to get 3-4 perfect or near perfect gems.


Understanding how gem stats work will be covered later, but for now, just know that on a base gem, having a higher PR is almost always better. All gems, when maxed out, will all be the same PR.


When looking at the stats of gems, having a lower critical Hit stat is always better. The easiest way to decide if a gem is good or not is to look at the Critical Hit stat. If its 3% or lower, or slightly above that, it is ideal. Basically, having a lower critical hit will mean that the other stats have a change to be higher. If a gem has a higher base pr, it means that the stats on the gem are higher, which is always better, but you do not want a very high critical hit stat.


Basically what im saying is, you want as high of pr as you can get, but with a lower critical hit %. 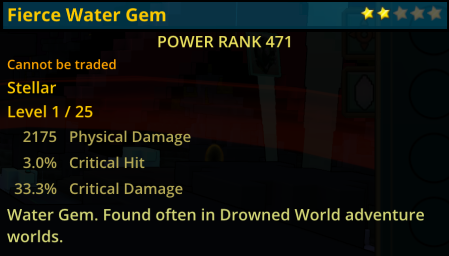 Between these two gems, you can see that the left Air gem has:


Do note that having higher base stats or PR does not really matter, it just means that you will be putting a little less into the gem later to max it out. Like I said before, all gems are able to get to the same pr and stats with enough work.

Yes there is a best way to upgrade gems.


Upgrading gems on Wednesday is across the board the best.


Wednesday is Gem Day, meaning gem upgrade dust cost is reduced 10% (20% with patron). You might hear or read something about gems cracking, and just know that this was removed from the game, thank God.


For you curious people out there, gem cracking was when on upgrading, there was a chance for the gem to crack, and you had to repair it with Re-Gemerators before upgrading it again.

When upgrading gems you are able to put horseshoes, luckbugs, and luck cats on.


If you find you are low on gem dust but have an abundance of flux for some reason (give me some), you can level gems up to level 15 and then loot collect them, and you will get more gem dust out of them.


Do note there is a little check box that when clicked, allows the gem to be only upgraded to level 15, which is incredibly useful when using the space bar to upgrade it, rather than clicking upgrade. Using the space bar goes MUCH faster, so use it wisely.


You upgraded your gem to level 25!


To understand what to do now, we must go back to the beginning.


As I was explaining before, when you get a level 1 gem, a higher pr is normally better. Here is why. 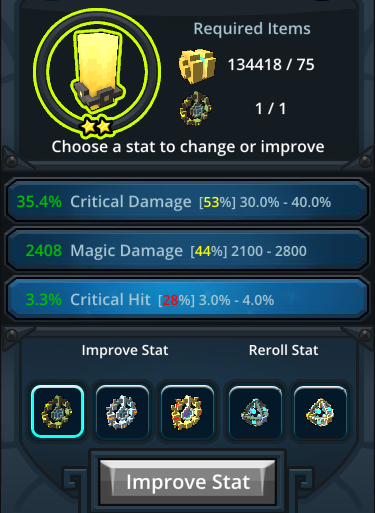 Here is a level 1 gem in the gem forge. You can see that each stat has a % next to it in html tags. This is how close the stat is to being perfect, or 100%. Having a higher pr on the gem means that these stats will be closer to 100%, which means less work for us later on. You can head over to the Adventurer’s Crafting Bench and go to the gem tab to craft rough, precise, and superior focuses.


There is no correct one to pick, but there are some reasons to pick one or another.


If you still need the Voidwatcher dragon, doing the rough focus method might be best, because you will be buying a lot of shadow caches, which drop the egg fragments.


If you have a TON of gem dust, and I mean a TON of it, or if you simply love farming dungeons, then the precise focus might be the best.


If you have an absolute ton of flux and just want it to be over and done with, the superior focuses will be the best.


The name of the game here is just maxing out the stats to 100%. Easier said than done, but also that easy.

Upon further inspection, you will see that some stats will have little pearls on them. These are stat boosts. Upgrading a gem to level 15 will show every stat boost, as they are not all visible till then. Having a level 1 gem with only 1 star will only allow a max of 2 stat boosts on a gem, rather than all 3. Stat boosts give buffs to the stat its on, as well as PR on the gem.

You never want any stat on Critical Hit, and if you do, you will want to roll that off. To do this, head over to the same gem tab where you craft the focuses, and you will see a contained chaos flare. To craft these, you need two contained chaos sparks. Additionally, you can use the sparks to change the stat on a gem, say from max health to critical damage, but if you farm for the correct gem stats, you dont need to do that in the first place.


You get binding darkness from killing enemies in the delves, you get lunar souls from opening the chest with the key every 3 floors in the delves, and you get eyes from shadow caches, which is why opening boxes for upgrading the stats is what I recommend. Kill three stones with one bird.

– Magic/Physical Damage (the damage type is set to the gem per the name, cannot be changed)


The flare will randomly change the location of the stat boost between the two other stats on the gem. Start with rolling stat boosts off of Critical Hit, as its guaranteed to help, rather than trying to focus on moving a boost from critical damage to Magic/Physical Damage.


To know what boosts you want on certain stats, you can refer to this spreadsheet


To be honest, rolling your boosts off of critical hit should be decent enough, as long as you have a decent mix of boosts on Damage and Critical Damage, but this spreadsheet is for every class, and gives the stat boost combination for the highest damage. Do not that between even the top 10 builds, the damage does not differ that much at all.


Also note that on cosmic gems, you want all three boosts into light rather than damage or critical damage.

The same basic method exists for obtaining, upgrading, and deciding stats for empowered gems except a few things.


– Empowered gems can swap damage types from Magic to Physical, and vice verse


– On a speed class like neon ninja, pyrodisc is a must, as well as vampirian vanquisher (which only is a cosmic empowered gem)


– On damage classes, Berserk Battler is a must, as it increases attack speed and light periodically. (which only is a cosmic empowered gem)


– Volatile Velocity is a decent empowered gem for ranged classes


– Explosive Epilogue is great, especially on the Shadow hunter (Id say its a must on the shadow hunter) (however it does push enemies around a bit, so it is frowned upon in purple runs in the delves)


– Empyrean Barrier and Cubic Curtain are good for tank builds


Can read more about it here: https://trove.fandom.com/wiki/Empowered_Gem – [fandom.com]

This is all for Trove How to Get Gems & Locations – Trove Wiki Guide hope you enjoy the post. If you believe we forget or we should update the post please let us know via comment, we will try our best to fix how fast is possible! Have a great day!