Calamity is a mod famous for its many bosses and a broad pool of weapons… so what if I took one and tried to use it through the entire game?


In this challenge I will be trying to use the P90 throughout the entire game as my primary damage source, from Desert Scourge to Supreme Calamitas.


There is what happened during Pre-Hardmode:

As usual, I will be listing any rules I’ll be using during this playthrough below. As usual I’m playing on Expert Mode, but it should be theoretically possible on other difficulties too.

As expected, our only weapon we can use is the P90. Minions, whether weapon-summoned, armour-summoned or accessory-summoned are blacklisted, so almost every point of damage has to come from the P90

As with other low-damage runs, extra accessory slots can be granted should the player chose to use them. I followed a simple rule:

Since Pre-Hardmode was already destined to be a cakewalk, I gave myself the extra rule that I can only use Musket Balls prior to defeating the Wall of Flesh. Didn’t make too much of a difference in the long run, but it seemed unfair using special ammo on top of having a weapon further in progression than intended

Additionally, I also banned both Campfires and Heart Lanterns while in Pre-Hardmode as well for a minor addition to the challenge. It didn’t make too much of a difference, though


Anyways, with the rules aside, onto the run 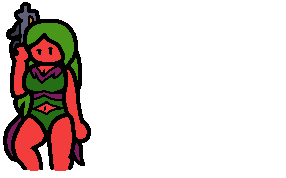 (For time reference this run was performed after the new Pixie Shirt was present in TModLoader, but before the new Pixie Pants were… so the tail end of 1.3 but before the TModLoader 1.4 update was finalised and also pre-Draedon update… which also created a weird outfit in itself but I just didn’t question it anyways on we go-)

Before the player can access the arms dealer (the 5 minutes before he spawns, to be fair) the player is mostly defenceless against enemies. The guide and any other town NPCs that move in will be required to attack things.


Fortunately building 2 or 3 houses should be enough if the player doesn’t do too much exploring before building, meaning the spawn roster for NPCs would be limited and thus a higher chance for the arms dealer to spawn.

-When the arms dealer has moved in the player can purchase musket balls for the P90. Prepare to do this a lot since it uses so many.

With access to ammo not much of the early game will be too great of an issue for the player. The P90 shreds basically anything in the player’s path, even un-reforged and using only musket balls.


The only real concern is ammo. The player likely currently lacks a good money source and since the P90 chews through ammo they will likely need to restock very often with very limited funds. Scavenging for scraps like dye plants and mushrooms to sell may be wise for a few extra early-game rounds.

-With enough exploration and enough resources, the player may want to prepare to take on a boss.

Using only Musket Balls… this fight is nonexistent. The only real way to lose is having King Slime telefrag you when you have low health or running out of ammo.


Seriously this was pathetic.

-The Slimy Saddle and the Slime Hook are appreciated

Desert Scourge is a boss that, be default, has more health than King Slime so surely… nevermind it’s another super-quick super-easy victory.


Arguably even less of a threat than King Slime was because only Scourge’s head deals significant damage… thus standing still may actually still let you win the DPS war against this boss.


Only real threat, again, is running out of ammo.

-Scourge can provide fishing gear which can help get the Abyssal Amulet; an unnecessarily destructive force at this point in the game but why not?

-Scourge’s items can be sold for a decent profit, so finding Amidias and buying summons en masse and farming Scourge can make a great source of early-game ammo

Normally the Eye of Cthulhu can be the first boss to actually challenge the player to a degree; having high mobility and damage when it enters Phase 2 in Expert Mode.


However, we have the P90… which deals insane DPS vs low-damage targets and also can keep up with Phase 2, even during the chain dashes.


…yeeeaaah this wasn’t tough at all.

-The Shield of Cthulhu can be nice, providing some additional mobility

The first boss to take more than like 10 seconds to kill and the first boss that can actually pose any sort of threat to the player. Crabulon’s contact damage is high and spores plentiful, so while the player may be able to shred its HP there’s actually a risk of taking hits.


However… the Abyssal Amulet exists and it affects the spores; meaning that a single P90 bullet will destroy a spore by itself and thus limiting the time spent defending yourself from spores.

-Aside from the Revengeance boosting item nothing Crabulon drops is very helpful for this challenge. However, it does drop enough Glowing Mushrooms to continuously re-make its summoning item if farming Medallions for Scourge isn’t possible for some reason

This boss takes a whole 25% longer to kill than Crabulon and a whole 60% longer than the previous bosses at a whopping… 16 seconds.


As stated prior the Abyssal Amulet absolutely bodies the Creepers, only leaving the player to have to worry about Phase 2… which it turns out can be infinitely stun-locked to death by the P90’s insane firing speed.


The only real threat is spawning it when in an enclosed space like the Crimson’s finger-like tunnels since those can lead to cheap hits, but otherwise the fight is pitifully easy.

-The player can get the Deathbringer Pickaxe and can effectively get molten gear at this point. However this doesn’t really benefit the player since their main weapon is ranged.

-BoC and EoW’s drops both sell for a lot, so it makes a decent money farm

Unlike the Brain of Cthulhu, the Perforators actually do signal the beginnings of the ‘challenge’ in this challenge; having the only fight thus far to surpass 30 seconds.


However, the boss is still easy considering the player’s main weapon here is basically the minishark on steroids and they likely have the Abyssal Amulet for this which tbh I probably should’ve banned in the rules but the run’s over now it’s too late to change it.


Crush Depth shreds the worms but the 2nd worm especially can be stun-locked by shooting the head as the segments will continuously break and keep killing its momentum.

-Aerialite gear can now be obtained which could be useful. Admittedly I didn’t use it out of sheer laziness but I’d imagine it’s good

The first boss in the challenge to actually pose a threat to the player for one main reason: the Expert Mode gimmick. Queen Bee’s gradual defence buffs mean that, before long, the P90’s damage rapidly begins falling off and soon only deals 1-2 damage per shot once Queen Bee’s health gets to around 1/4.


Ultimately, the fight took a whole minute to complete, mostly because of how little damage I could do to Queen Bee.


Shark Tooth Necklace and Abyssal Amulet recommended; the former helping bypass the defence buffs and the latter to provide extra damage on top of the player’s own to help offset the damage loss.

-Basically none of Queen Bee’s items are useful for the challenge, aside from perhaps the Honeyed Goggles if you really really need flight for some reason

Skeletron isn’t a particularly hard boss in this run by any means, being simply a sped-up version of its normal fight.


As to be expected our weapon’s low damage means we do have to fight Skeletron the normal way and can’t simply brute force through the skull’s boosted defence in Expert Mode.

-The player can now access the dungeon, granting access mainly to the Cobalt Shield and Necro Armour

-Skeletron can drop the Skeletron Hook, which is quite decent if the player needs a hook to use

The first fight thus far to truly require some cognitive brain function, as Slime God deals high contact damage and has high enough health and defence to tank a fair amount of punishment, regardless of the fact the P90 is Post-Plantera.


The large slimes are mildly problematic, especially when the main core decides to inhabit one as it increases its defence enough to reduce damage dealt to only around 1-2 damage a shot. Fortunately, the uninhabited slimes have low enough defence to deal some damage to.


The Core is fast and deals decent damage, however the P90 is also very fast and deals high damage. Overall the core isn’t that bad once on its own as the P90 can shred it if the core is baited to chase the player in a straight enough line.


This is also the first boss to properly take more than a minute to defeat… surprising since we’re not even in Hardmode yet.

-The player can now craft Statigel Armour, which is the best armour set available in Pre-Hardmode and probably the overall best option thanks to the buffed mobility

The final boss of Pre-Hardmode and… only the 3rd hardest boss being beaten by Queen Bee and Slime God…?


Now anyone who read the Lunic Eye page may be a little confused at first since the Eye is also a low-damage, fast-firing Hardmode weapon… however the main difference is the homing… or in the P90’s case the lack thereof.


Not being confined to just shooting the closest enemy to the player means the player can directly attack the Wall when they have openings without the worry of having projectiles shoot off to attack more Hungries, meaning all of the P90’s DPS can be focused on the Wall’s vulnerable eyes.

-Emblems are valuable from this boss, not just the Ranger Emblem either. 3 Emblems may be recommended in-all, mostly for later.

And that was the first, and by far the easiest, third of the P90 challenge.


Like I said, this is probably the most boring part overall since nothing really poses a threat to the player Pre-Hardmode due to the weapon’s sheer DPS, but it felt wrong to not include a third of the game because my funny gun deals excessive damage.


Admittedly the challenge was completed a little while ago, but nothing has updated yet Calamity-wise so everything is up-to-date… until the Draedon update comes out.


Hopefully I’ll have the next part done soon enough

See you guys then

This is all for tModLoader Calamity Pre Hardmode Guide – Weapons-Classes Info hope you enjoy the post. If you believe we forget or we should update the post please let us know via comment, we will try our best to fix how fast is possible! Have a great day!