⠀
This guide is meant to assist those looking to 100% our favorite zombie game. I created all of the gifs and images provided to help and may extend on this further like my other guides.

Difficulty and Levels are listed. You can apply the concepts described anywhere in game given you have the abilities. Most are simply ‘the easiest way’ OR the first opportunity to obtain it.

These are unlocked via natural progression through the game.

They are listed in the order you unlock them.

No images/gifs for these to prevent spoilers. Not necessary anyhow.

REAP WHAT YOU SOW

Now you’re getting the hang of it! Finish the level ‘Bleeding Ground‘

Give Stubbs a hand! Finish the level ‘The Slammer‘

Do it for the meme! Finish the level ‘Cop Rock‘

NEXT TIME BRING A MAP

We know what you did. Finish the level ‘Painting the Town Red‘

DAWN OF THE DEAD

So many deals! Finish the level ‘Punchbowl Maul‘

You look good in those genes. Finish the level ‘Fall of the House of Otis‘

I MAKE A PP

Soil the water supply with your finely aged urine. Finish the level ‘When the Zombie Break‘

Neither rain, nor sleet, nor bullets, nor brains. Finish the level ‘The Sacking of Punchbowl‘

DOES THIS LOOK INFECTED?

Eh, shake it off. Finish the level ‘The Doctor Will See You Now‘

Clear your calendar. Finish the level ‘Paved with Good Intentions‘

Bon apetit. Finish the level ‘The Ghoul of Your Dream‘

It’s been 15 years. You ate your first brain. Was it worth it? Difficulty: Any Level: Welcome to Punchbowl Eat a Brain. Part of tutorial.

Get run over by a vehicle. Difficulty: Any Level: Any Let the Police car that spawns at the start of ‘Painting the Town Red‘ hit you. You can do this earlier in ‘Bleeding Grounds‘ too by an enemy controlled Sod-O-Mobile.

SHOULD’VE HID IN A FRIDGE

Load a jeep up with the squad. Difficulty: Any Level: Paved with Good Intentions/Any with Jeep Can be completed at the start of ‘Paved with Good Intentions‘. An enemy may steal the Jeep at the start of the level but will immediately either crash or be hit by the airstrike. Get in and let a zombie get into the passenger seat. This can be completed on any level with a Jeep.) Also, you only need a single passenger.

WE GOT A TWITCHER!

BOOM! HEADSHOT! Difficulty: Any Level: The Slammer Possess an enemy and then shoot another enemy in the head. The first oppurtunity to do this is in ‘The Slammer’ when you first take control of Stubb’s hand and enter the vents. Go straight all the way until you drop into a room with a single cop. Possess him and watch the left door as possessing him will trigger the door to open and another Cop will walk in. Shoot him in the head. (This can be completed at any time anywhere afterward.)

5 Tractor Kills Difficulty: Any Level: Fall of the House of Otis An enemy will crash an ‘Impala’ (tractor) into some hay bales just after the sheep pen. Get in and run ’em over.

TANKS FOR THE MEMORIES

You shouldn’t pet the sheep. Difficulty: Any Level: Fall of the House of Otis Jump into the pen and use ‘Unholy Flatulence’…

…or you can just break the gate and kick one. If you follow the fence behind the nearby building you can walk behind some trees and find a man chasing a sheep around a bale…save the sheep and you’ll get a surprise. *image coming soon*

THE FIRST LAW OF ROBOTICS

Get killed by a robot. Difficulty: Any Level: When the Zombie Break As soon as the level ‘When the Zombie Break’ starts turn right and there are two robots standing at a water cooler contemplating their programming. Walk up and start attacking them until they either fight back or explode. Either will pop the achievement.

Stun 10 enemies with your Unholy Flatulence Difficulty: Any Level: Any The quickest way to knock this one out is to play ‘Bleeding Ground’ on Easy, as it makes you a bullet sponge and can easily herd Scientists and Cops together. The scientists will follow you. Cops like to backpedal so position yourself in a way that makes them do this into walls.

Land a jump tackle. Difficulty: Any Level: Any Jump and Attack someone in mid-air.

10 kills with a single Sputum Head Difficulty: Easy Level: Painting the Town Red First – your own zombies count for this. Use that to your advantage. The first opportunity to get this one is when you get the ability. You need to ‘zombify’ all of the Cops on the very same floor BEFORE triggering the cutscene (note the red car). Try and have them grouped just before the door by whistling and the Riot Cops that spawn should aggro your zeds immediately. Pop your head off and let the good times roll. *will be updating the images with gifs once I get a good clip 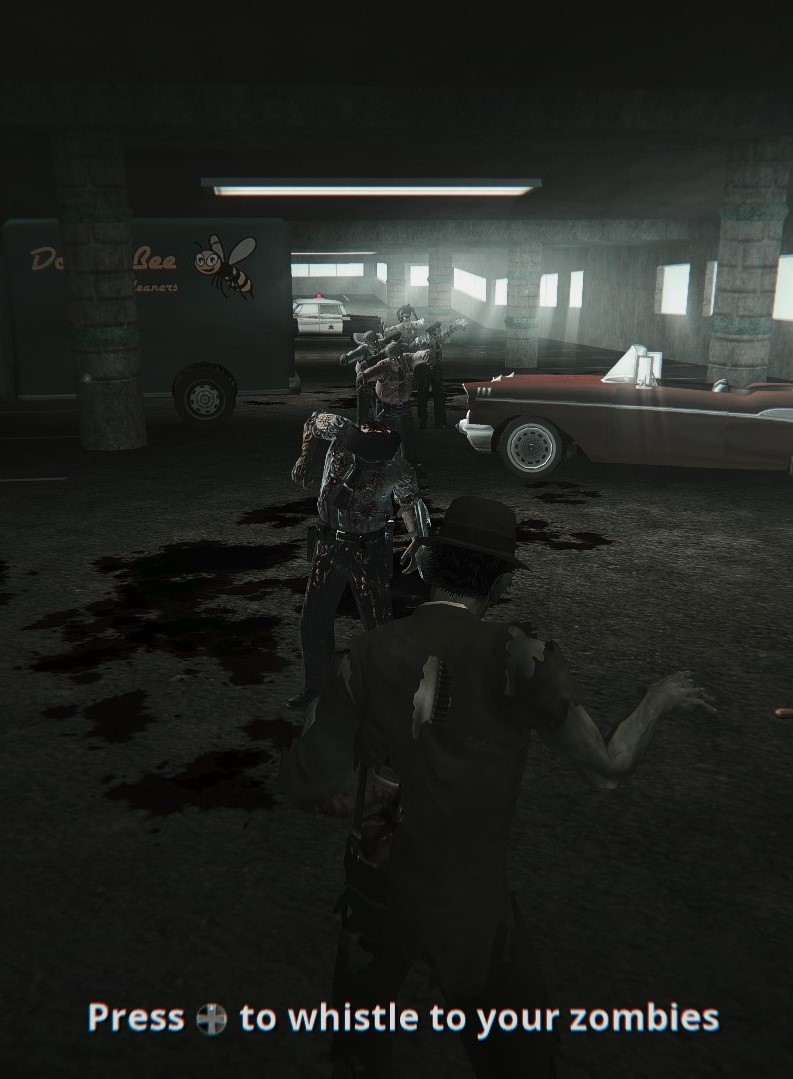 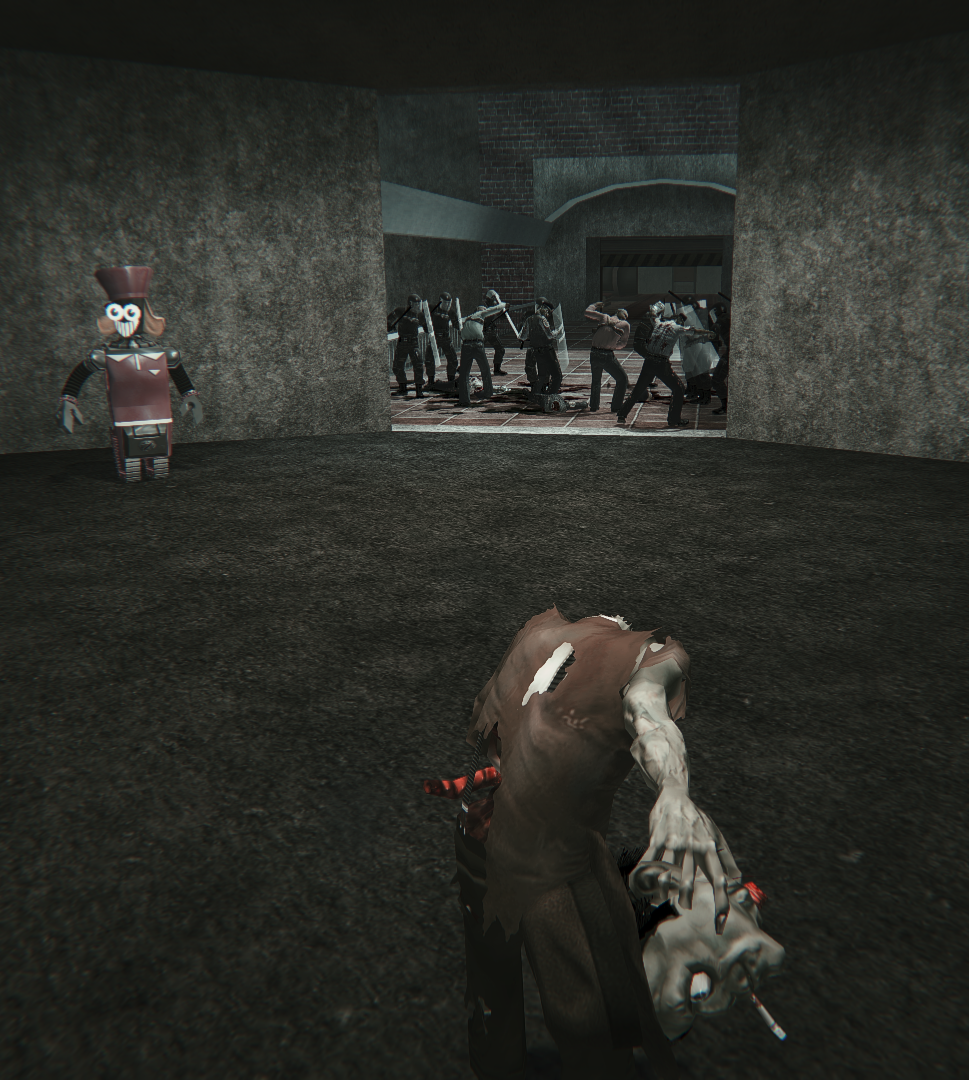 You’re a zombie that died. Difficulty: Any Level: Any …die. Pick your poison.

Posess each type of enemy once. Difficulty: Any Level: Any Cop Civilian Farmer Security Force (Quartet Guys) Soldier Scientist Fairly straight forward. Just possess each enemy as you play. I intend to extend on this to make it easier/faster but want to verify some things first.

Beat the game in under two hours. Difficulty: Any Level: All FAR easier than you expect. Play on Easy and simply run through the levels skipping the cutscenes. I finished in an hour and 17 minutes and that includes a few mishaps so don’t stress yourself out just make sure you have the time to play and have a general idea of the maps. I would like to create a few maps to show the best paths. Could be something I work on soon.

100% the dance battle. We thought that was impossible. The best advice I can give is to remember that you can pause the game after the Chief’s turn and take a moment to write down or repeat the pattern a few times before unpausing.

Eat 2005 brains Difficulty: Easy Level: The Ghoul of Your Dreams Easiest way to farm these at the moment is the final boss on Easy (so you’re a bullet sponge). As you spawn into the fight run into the two rooms immediately behind you and eat the brains of the 4 civilians then Pause – Load Checkpoint – Repeat. Or you can just continue playing running back and forth between the rooms until your horde overwhelms the boss (which could make you restart the level entirely).

Your friends all just read that achievement title. You need help. Beat the game on Insane difficulty. Simple…well, not THAT simple. Best tips until I finish typing up my notes? Create hordes, take it slow, abuse Possession and focus specialty enemies i.e Heavy Weapons, Jetpacks etc. Note that some levels are designed in ways you can dodge and weave through checkpoints easily.

🏆 SIX SEASONS AND A MOVIE

Demand a sequel. Obtain all other Achievements.

Hopefully my guide has helped in some way.

Either way thanks for taking the time to check it out.

Here we come to an end for Stubbs the Zombie in Rebel Without a Pulse Achievement Guide | 100% hope you enjoy it. If you think we forget something to include or we should make an update to the post let us know via comment, and we will fix it asap! Thanks and have a great day!