When attacks strike a monster, two types of damage are dealt: Physical (Raw) damage, and Elemental damage (but only if the weapon has an Elemental attribute).

Some weapons have an abnormal status attribute instead of an Elemental attribute. These weapons will Physical damage and apply Status damage.

Severing (sometimes known as Cutting) damage is the primary damage type for the following weapons:

Blunt damage is the primary damage type for the following weapons:

Projectile damage is the primary damage type for the following weapons:

If a monster has no weakness to a specific element on their Hitzone, then no Elemental damage is dealt. The Physical damage done by the weapon is not affected, as Elemental and Physical damage are calculated separately.

After the monster recovers, its tolerance threshold for the Ailment increases. This means it takes more Status damage must be accumulated before being able to inflict the monster with the same Ailment.

For all Ailments (except Blast), the accumulated Status damage disappears gradually due to the monster’s tolerances. Overcoming this gradual decay is necessary to successfully trigger a Status Ailment on a monster.

The Attack value of the Hunter is calculated from the Hunter’s equipped weapon, offensive boosts (e.g. being in DB’s Archdemon Mode or having a HH attack buff), equipped skills, items, and Food skills. When damage is calculated, only True values are used, and the Displayed Attack value is adjusted down by the Display Multiplier.

The attack value displayed in a Hunter’s status screen is actually an inflated value that helps indicate the average damage per Be hit the weapon can deal.

In reality, all weapons have a true value (commonly referred to as “True Raw” and “True Element) and a displayed value (“Display Raw” and “Display Element”). The displayed value is calculated by taking the weapon’s true values and multiplying it by a specific Display Multiplier. For example, if the Bow has a true raw of 100, and a display multiplier of 1.2, then its display raw (the value in the status screen) is 120. 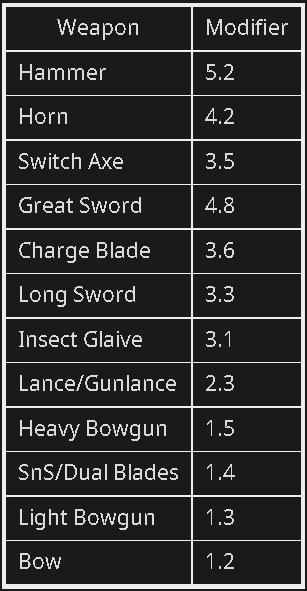 Effects in the same group do not stack

Sharpness describes how sharp a weapon is. Sharper weapons deal more damage and are less likely to bounce when hitting tough body parts.

Weapon Sharpness is split into discrete colors (see below). Different colors provide different multipliers to the damage dealt by the player. 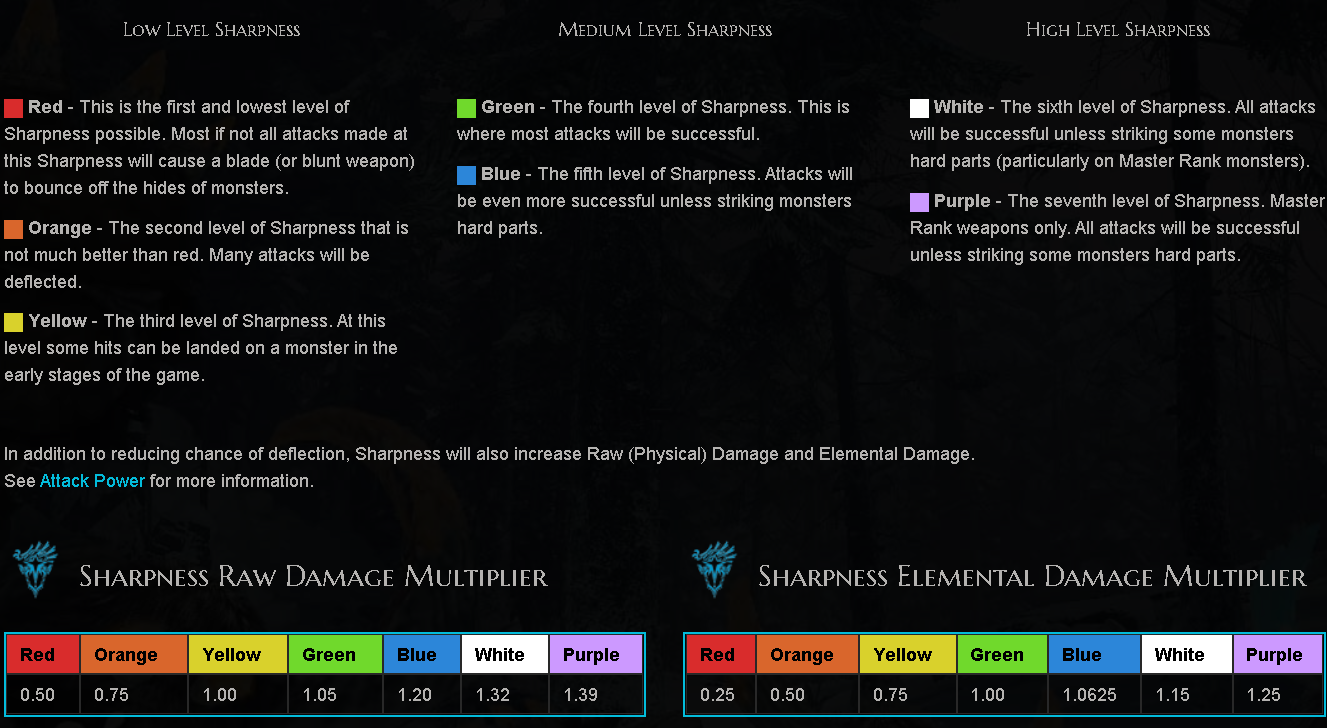 In addition to lower damage, weaker Sharpness colors causes some weapons to lose functionality. For example, at Orange Sharpness, the Gunlance’s shells will deal less damage, the Switch Axe may bounce while in Sword mode, and the Dual Blades will not complete its full Blade Dance animation. At Red Sharpness, the Gunlance cannot shell.

Each weapon can only make a specific amount of hits in a specific sharpness color before it dulls and and the sharpness color is lowered. Sharpness is consumed when a player lands an attack, but some shield attacks from the SnS and Lance do not deplete Sharpness. 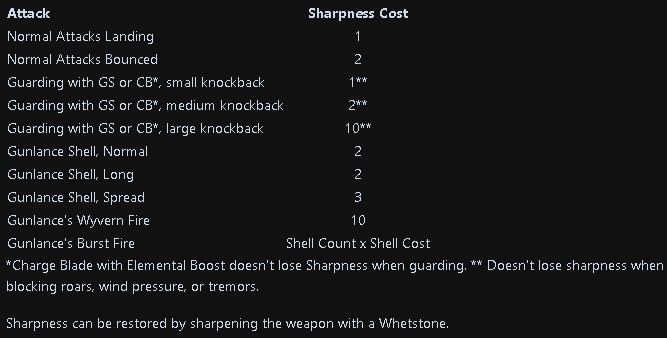 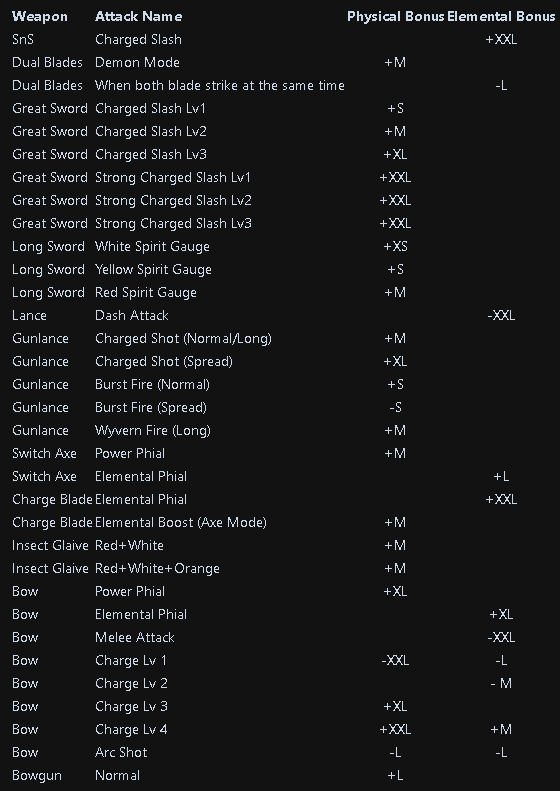 Some moves modify Sharpness, which affects both damage output and the liklihood to bounce. 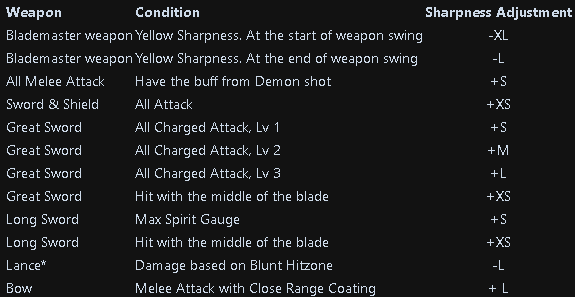 The below table briefly illustrates the interaction between Affinity and the probability of making a Critical or Feeble Hit: 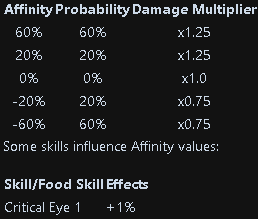 I think many people have checked Monster Field Guide after they unlocked the monster to check what their weak points are and to what elements they are weak to. However, this is just part of the story which may not be telling all of the truth. In this guide I will try to break down what you should be caring about and how to maximize your damage during hunts.

Hit zone values show the true weak points of the monster. When I learned about them I changed my hunting tactics a bit. I now try to concentrate on those parts which have the highest hitzones.

In this tutorial let us take a look at Ruiner Nergigante as an example (Loots and Rewards inluded): 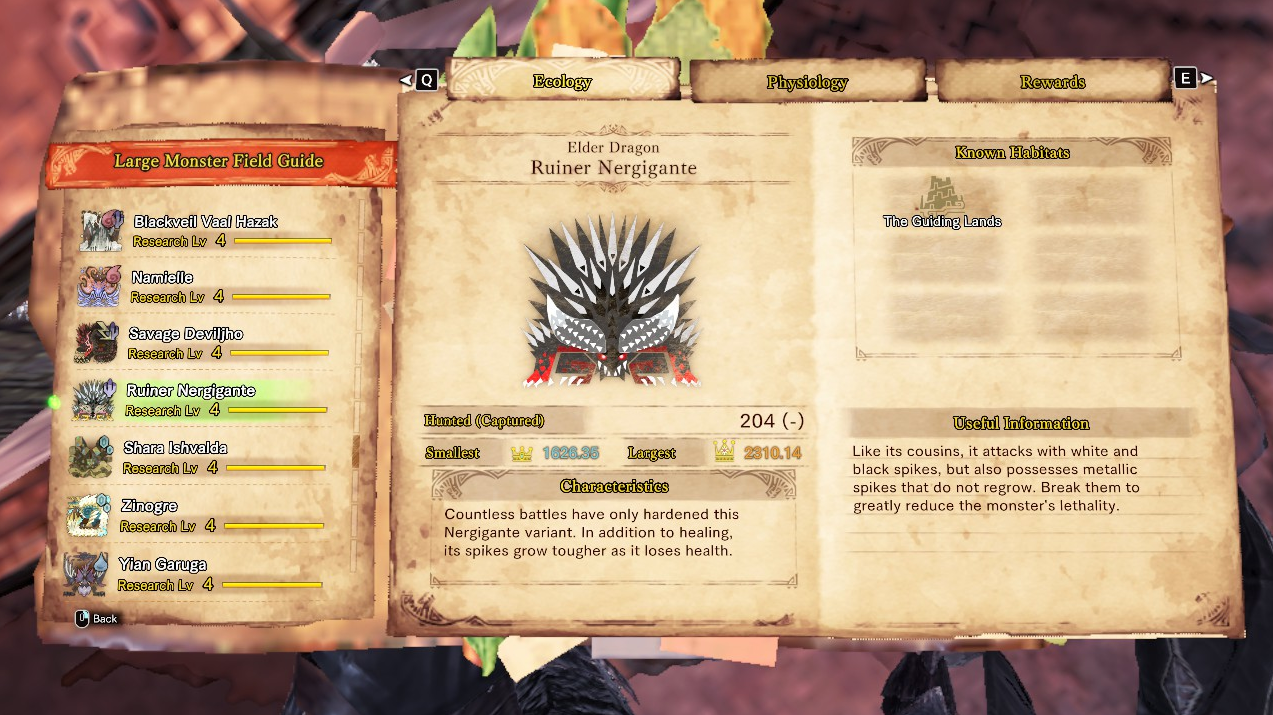 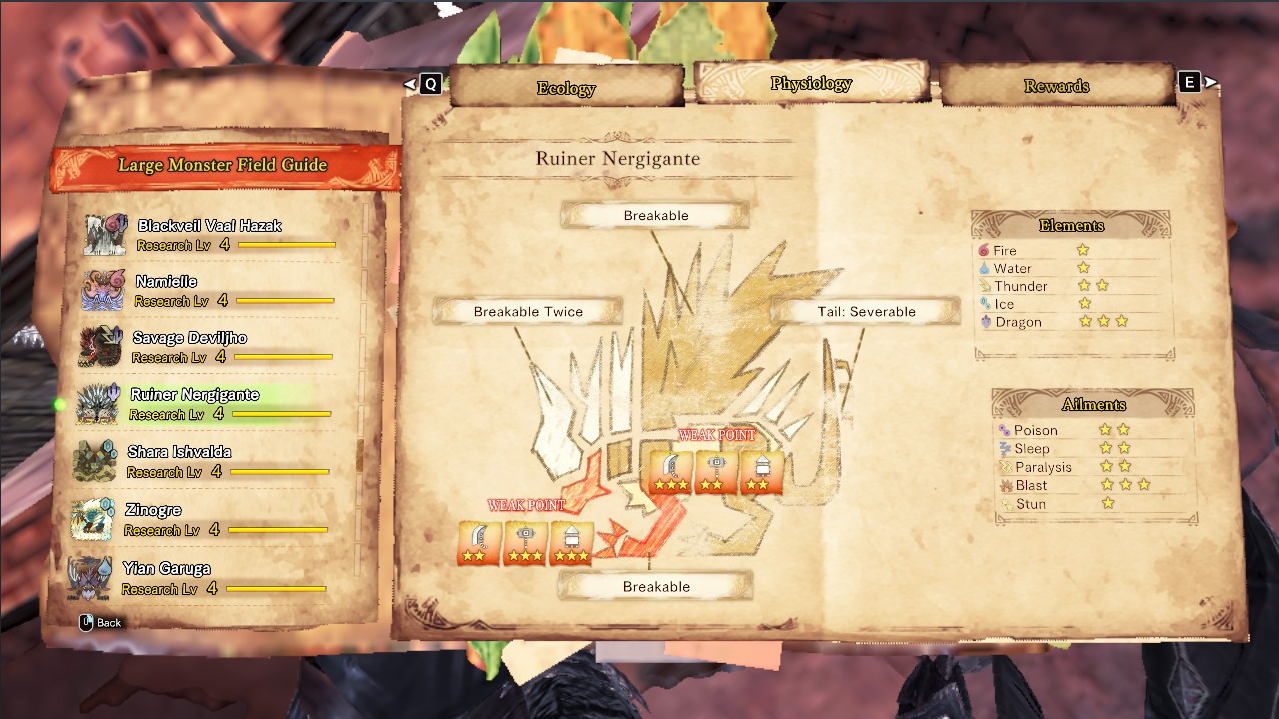 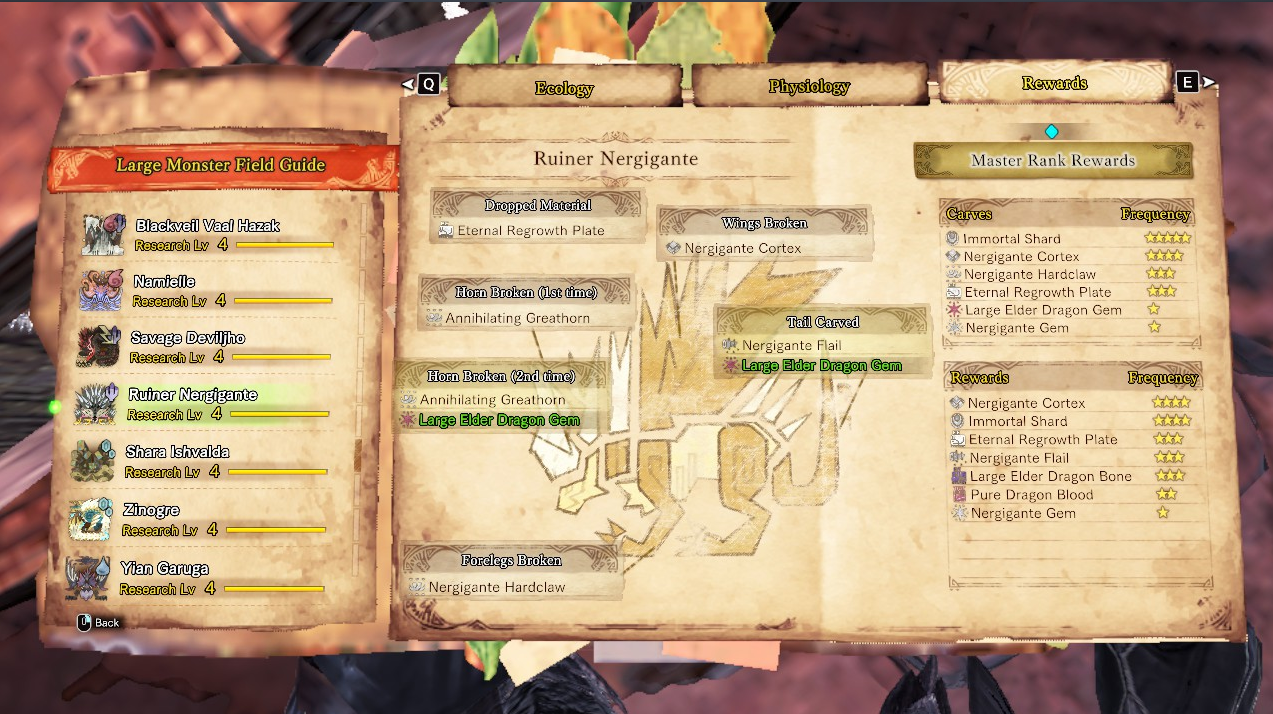 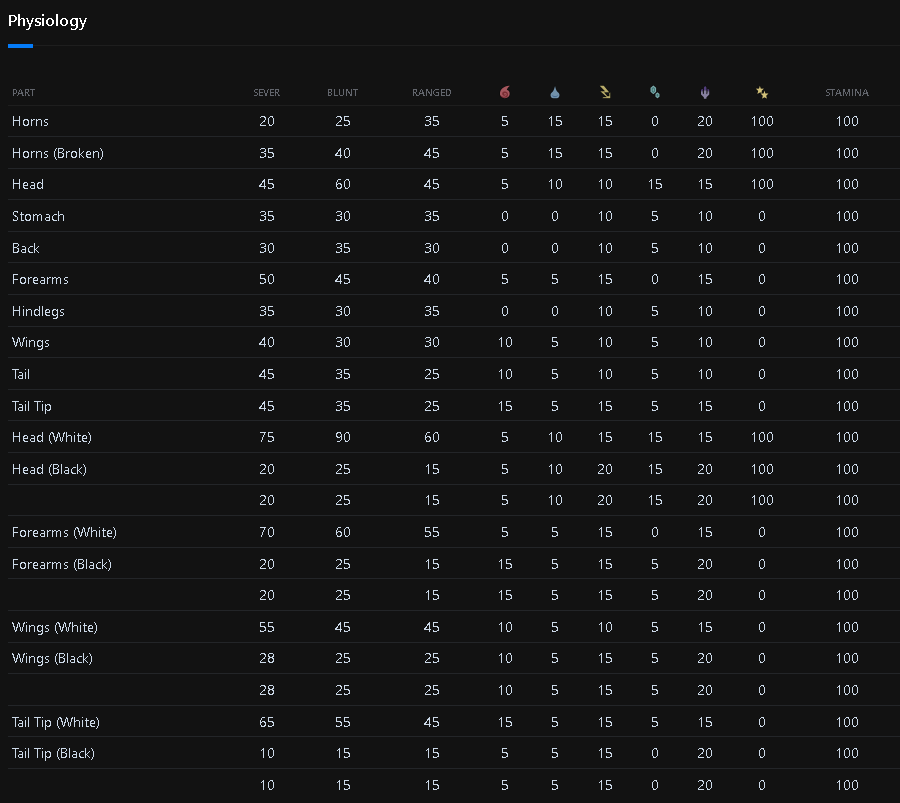 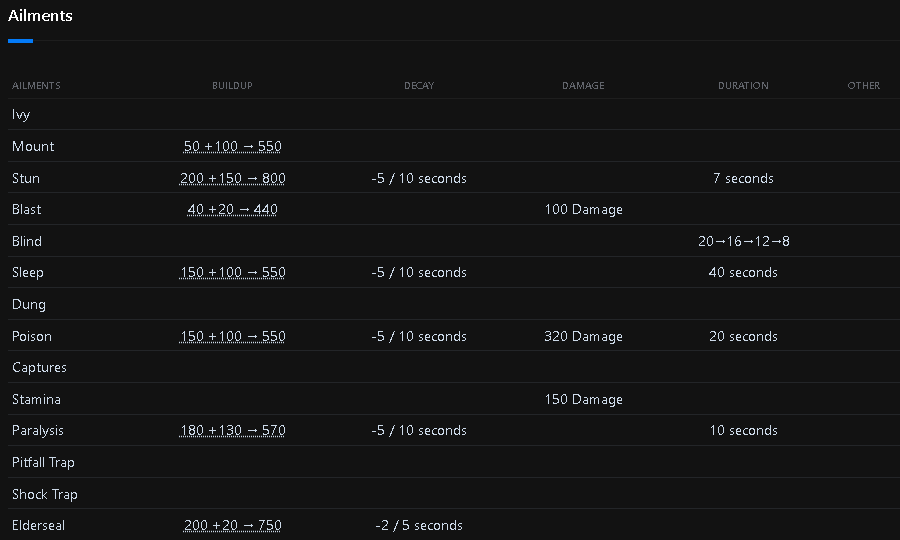 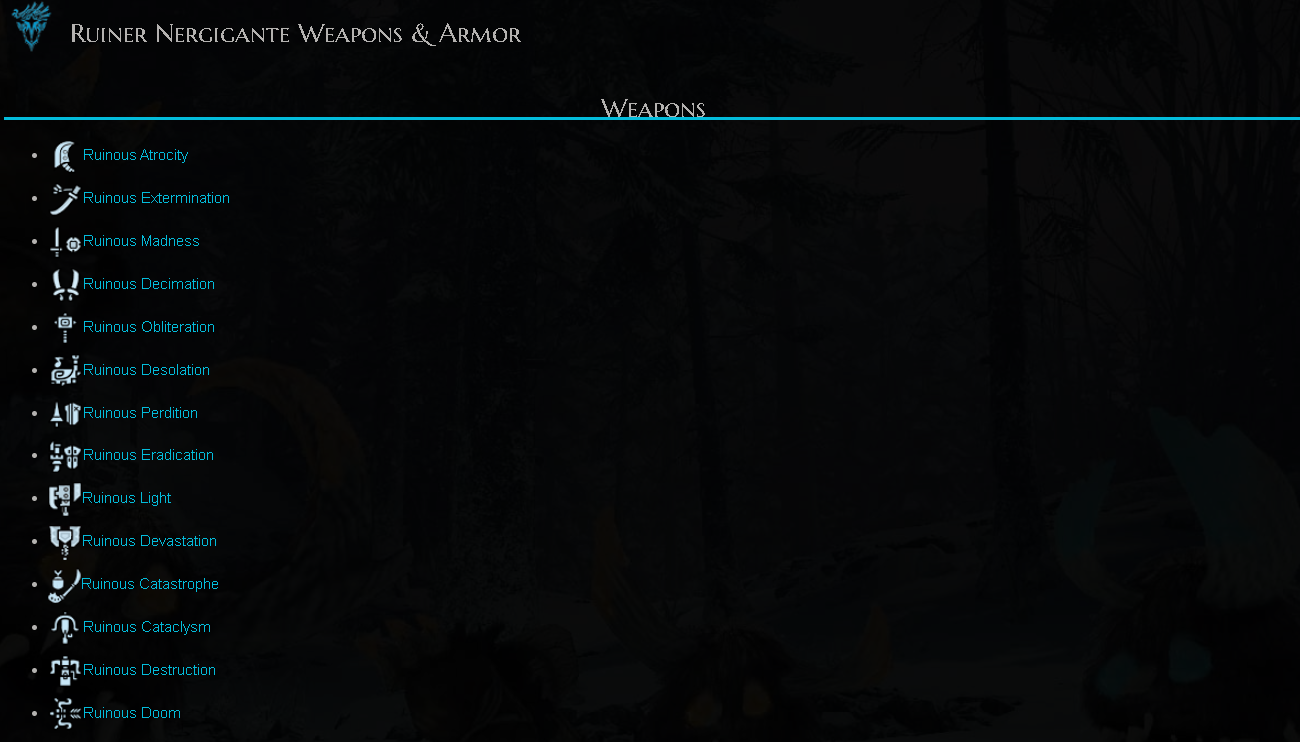 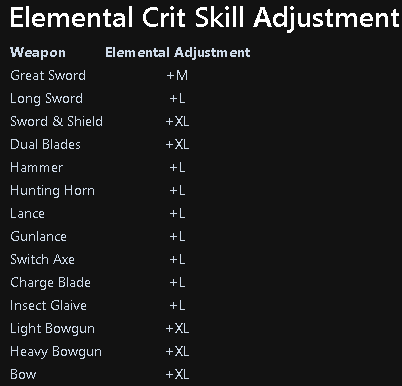 For Gunner Weapons, Critical Distance (or Critical Range) refers to the distance at which a fired shot deals maximal damage. If the player is in Critical Distance, the aiming reticle will look like this: 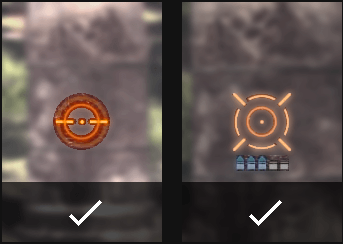 Critical Distance does not affect Affinity or Critical Hits.

The Light Bowgun is capable of Rapid Fire, where the LBG shoots multiple shots in a single burst at the cost of 1 ammo. Each individual shot fired from Rapid Fire is weaker than a single shot of the same ammo type, but if most Rapid Fire shots land, their combined damage will exceed the damage done by firing just a single shot.

Fixed damage is dealt directly to the monster and does not have a damage calculation. This means that Fixed damage attacks are not mitigated by the monster’s Hitzone values or affected by the player’s Attack value. 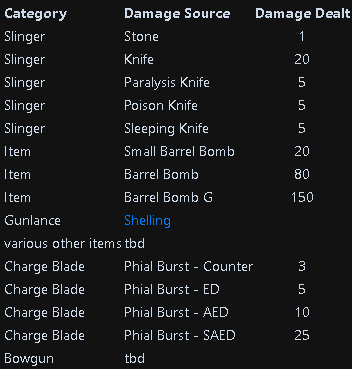 Hope you enjoy the post for Monster Hunter: World Damage Types + Status Attacks + Weapon Stats, If you think we should update the post or something is wrong please let us know via comment and we will fix it how fast as possible! Thank you and have a great day!