This guide is here to help you make a few solid loadout choices for both solo and team gameplay. Note this guide will not go over what each ability or perk does since those are all explained in the in-game tutorial. This guide will help you pick a few combination of loadouts to help you evade and murder those annoying hunters!


Obvious disclaimer is obvious: Feel free to use your own combination of perks to suit your playstyle, this is not definitive list of loadouts, just some solid recommendations if you’re feeling overwhelmed with all the options.

How to save a loadout 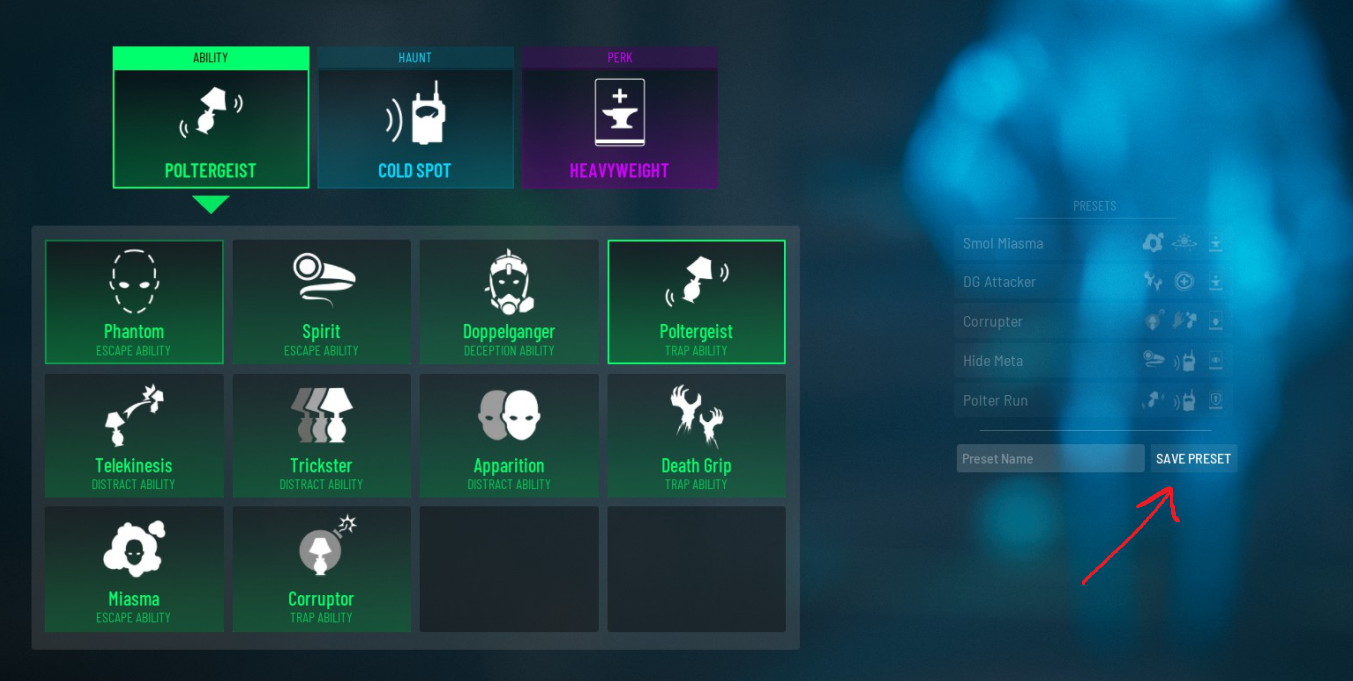 When you load into your game, you can quickly select the loadout by just clicking on it. To change a loadout simply reselect the perks you want, hover over the loadout name and then click on the refresh button.

Playing as a Ghost requires a little less flexibility than a Hunter since you might need even need to change your loadout during a match; but generally speaking there are two phases to playing ghost: Hidingbefore midnight and then Attackingafter midnight.


While hiding there are three sub categories: Stealth, Roaming, and Aggro, but after midnight Attacking is a lot straight forward: kill the hunters as fast as possible.

Unlike the Hunter’s gadget loadout slot, your Haunt ability is very different because you can only use after the hunters have killed you during the hiding phase. Thus is does not combo with any of the other loadouts in this guide except the Ghostly Focus perk which reduces the cooldown on the ability itself. If you die very early in the hiding phase, it is worth it to quick equip Ghostly Focus so you can spam your haunt more frequently; just remember to change to something else before midnight starts.

Haunts should be taken to counter what the Hunters are doing. Pay close attention and communicate with your team what equipment the hunters are using and then adapt accordingly.


My preferred haunt is:

But, like I said, counter what the Hunters are using and communicate with your fellow dead ghosts to cover all their equipment.


Alternatively you can pick any of the other Haunts to help your fellow ghosts as neccesary. A good all-rounded haunt is Chillsince it’s always useful to slow all the hunters: prevent them from chasing, causes then to waste time running between searching spots, and can help your team score an early kill if they’re playing aggro.

These loadouts focus on waiting for the Hunters to come to you; forcing them to equip multiple detection gadgets in an effort to sniff your your sneaky hiding spot. Stealth loadouts are great for first time ghosts since all you need to do is pick a secluded spot away from your fellow spooks and just wait out the timer.


After the game changes to midnight you MUST visit the shrine and change to an attacker loadout since your perk and ability gives near zero benefit during combat, and having a red glow effects counters your entire play style.

Roaming ghosts, also known as running ghosts, are players who utilize small props and high mobility to make the hunters chase them around the map endlessly. By wasting time on your antics the Stealth ghosts can relocate to quieter portions of the map safely, and you can team up with Aggro ghosts by luring sprinting hunters into their death traps.


The roaming ghosts playstyle also allows you to snipe the generator before midnight, which can outright win you the match immediately since hunters may not have access to health regen or defibrillators if they get killed.


To play as a roaming ghost there is only one Perk useful to you:


My preferred roaming abilities to combo with Shatterproof are:


However I will admit you can pretty much combo Shatterproof with any other ghostly ability, so mix and match until you find the combo that works for you

The final hiding phase ghost type: the Aggro ghost. These loadouts focus on survivability and burst damage to deal as much damage to the hunters as possible and hopefully snag a kill before they have a chance to regroup and hunt you down.


Aggro ghosts usually require full teamwork from all the other ghosts, but it is possible to play solo aggro, get one kill, absorb the soul and then switch to a hiding strategy until Midnight for an easy 3 vs 4 fight.


The two most important things for aggro ghosts is doing damage and tanking counter attack damage.


Time to suit up and kill some hunters. Here are some solo loadouts for you to reliably use in every fight. Run in with your team, spam your ability, and the whack those hunters good.

You should now be equipped with wide array of ghost loadouts to achieve Ghost victory. These loadouts are of course my own personal opinion, so feel free to change them to your own playstyle. This guide is subject to change as the game develops or new/better strategies emerge.


One final note to absolute beginners…

If want to know a priority sequence of equipment to unlock with your initial crystals, I recommend:


Please consider making this guide a favorite and giving it a star rating you think it deserves. Thank you!

Here we come to an end for Midnight Ghost Hunt Recommended Ghost Loadouts hope you enjoy it. If you think we forget something to include or we should make an update to the post let us know via comment, and we will fix it asap! Thanks and have a great day!