This guide is about who King Dice is, what he does and what role he plays in the game.

Who is King Dice 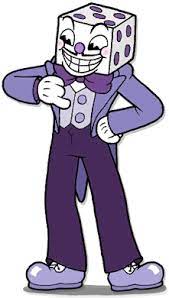 King Dice is the Devil’s right-hand man and the secondary antagonist of Cuphead. Its distinctive feature is the head in the form of a dice. It is an anthropomorphic creature with a dice-shaped head, eyes with green pupils, a purple flattened nose, black eyebrows and a mustache, and a mouth with two rows of white teeth. He is dressed in a purple tailcoat, under which there is a vest, and trousers with light lilac shoes. The four-fingered hands are covered with white gloves.

How King Dice met the Devil

When King Dice was young, he ran out of the house every night to a local bar to demonstrate his local drunk tricks. He always had an ace up his sleeve and often managed to fool people. One day he decided to go to another city, because in his bar people began to lose their wealth. But there were only 2 people in the new bar, one of them was a bartender, and the other was an old man. The old man began to tell his stories of his youth, but Dice was not interested in listening to him. Dice decided to steal money from the old man. But the old man saw this and the Devil himself appeared before Dice. He wanted to cut off the boy’s hands, but Dice begged for mercy. The devil decided to make the boy his servant. 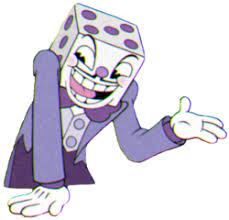 King Dice in the game

In order to fight Dice, the player must win the board game. There are a total of 15 slots on the roulette wheel, counting Start and Finish. Among them there are also nine cells with bosses, three of which give additional health when hit on them, three “Save” cells and one “Start over” cell. Before each turn, King Dice rolls a die that must be parried, after which it will show how many cells you need to move forward. The player can fight the following bosses. Upon reaching the “Finish”, the real battle with King Dice begins. He has only one attack – using his power, he sends a row of 12 playing cards. To avoid his attack, you need to parry cards with a pink pattern on them as a base for jumping. 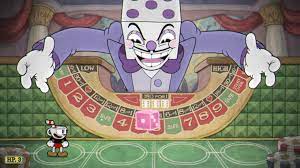 Hope you enjoy the post for Cuphead King Dice Info Guide, If you think we should update the post or something is wrong please let us know via comment and we will fix it how fast as possible! Thank you and have a great day!