Some people, inclusing myself, are having trouble getting the game to recognize map changes for our mods for the Alexander and Barbarian invasion expansions. The game does recognise changes for the base game/Imperial Campaign, but not for the expansions.

It seems to have something to do with the game refusing to regenerate “map.rwm” and base_map.rwm” files for the expansions.

Here follows a guide on how to force the game to recognise your changes despite this obvious bug.

What is the problem?

So what seems to be the problem that prevents map changing in the expansions?

My best guess is that it is caused by the game refusing to regenerate map.rwm and base_map.rwm files for both expansions after you made map changes in the mod. This failure will result in the game either not recognising your map changes, or just outright refusing to launch a campaign in your mod. 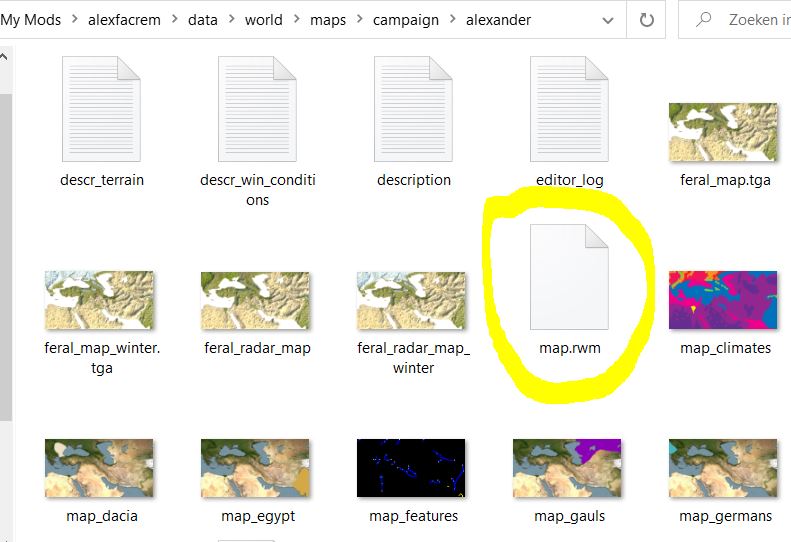 The way around the problem part 1: The Setup

Alright, now let’s talk about how to actually work around the problem.

Internally this seems to be unfixable. Believe my, i tried for a few days, i can’t get to game to do its job.

Luckely, we still have the old game, the standalone expansion Rome: Total war Alexander and the normal expansion Barbarian Invasion for the original Rome 1. All of you should have both these games, since you automatically get them when you buy the remaster. You will need a fresh install of either of those old games (depending on which of the 2 expansions you want to make a mod for).

The first thing you want to do is go to the files of the remsater. Find the folder Data/alexander/data/world/maps/campaign/alexander (or its counterpart for BI).

Now copy every single file in this folder.

Paste it in the folder alexander/data/world/maps/campaign/alexander (or its counterpart for BI). Overwrite all duplicate files with your coppied files. OBVIOUSLY YOU SHOULD FIRST MAKE A BACKUP OF ALL ORIGINAL FILES THAT YOU OVERWRITE!

Now go to the remaster folder Data/alexander/data/text (or its counterpart for BI). Copy all alexander_regions_and_settlement_names (“barbarian_invasion” instead of “alexander” for BI) files from this folder.

Paste them to the folder alexander/data/text (or its counterpart for BI) and overwrite all dublicate files.

Now go back to the alexander/data/world/maps/campaign/alexander (or its counterpart for BI) folder of Rome: Total War Alexander (not the remaster). Delete the map.rwm file from the map.

The way around the problem part 2: The modification

Now that everything is set up, you can start making the map changes you want.

Make whatever changes you want in any of the map related files (for example map_regions.tga) in the alexander/data/world/maps/campaign/alexander folder of Rome: Total War Alexander (not the remaster).

When you are done with your modifications, launch Rome: Total War Alexander (not the remaster).

Try to start a campaign. Do not worry if the game refuses to launch a campaign after clicking on a faction. There is a solid chance that the game will refuse to launch the campaign, but it doesn’t matter at all!

Now that you tried and probably failed to launch your modified campaign, close the game.

Go back to the alexander/data/world/maps/campaign/alexander folder of Rome: Total War Alexander (not the remaster).

A new map.rwm file should now have been generated by the game. This is why it doesn’t matter that the campaign didn’t launch. The existence of this new file confirms that the game recognised your map changes, and now these changes have been saved in this new map.rwm file. This is what we needed the old game for, since the remaster refuses to create this file for its 2 expansions.

This concludes the modification section of the guide, now on to how we get your changes implemented in your Rome: Remastered mod!

The way around the problem part 3: implementation of the changes

Now that we have gotten what we want from the old game, we can start to implement our map changes to our Rome: remastered mod.

Copy the new map.rwm file, and all the files that you have moddified for the map (for example map_regions.tga) from the folder alexander/data/world/maps/campaign/alexander of Rome: Total War Alexander (not the remaster).

Find the folder alexander/data/world/maps/campaign/alexander inside your mod. paste all the coppied files here and overwrite all duplicate files.

Delete the filelist.json from your mode in /Mods/My Mods/(whatever your mod is called). This is needed because without a removal the game will not renew its scan of your mods file structure when you launch the game.

Now all steps are completed!

Launch Rome Remastered with the appropriate expansion, and select your mod in the launcher. Don’t worry if the list of mods doesn’t load right away, it happens some times. Reload a few times if it doesn’t work, of in the worst case scenario try deleting the filelist.json file once more. Eventually the mod list will load. Then you select your mod, and launch the game.

The game should start. Unlike in Rome: Total War Alexander, you should now be able to start a campaign with the faction you select.

The game should load fine, and would you look at that!

The game recognised your map changes this time! And it is all thanks to the old game!

Written by General of Rome

This is all for Total War: ROME REMASTERED Modifying the campaign map of the Alexander campaign (should also work for BI) hope you enjoy the post. If you believe we forget or we should update the post please let us know via comment, we will try our best to fix how fast is possible! Have a great day!