If you are playing as a Roman faction or any of the Hellenic factions (Greek Cities, Thrace, Macedon and Seleucid) you have a very powerful tool at your disposal for the late game grind you might not know about:

There are 5 different city levels in Rome Total war (3 for for Barbarian factions):


Obviously the higher the city level the better the city becomes at making money and training units. However not all city layouts are created equal. Some cities are much easier to defend than others and there is no better example of that in the late game than city level 4 and city level 5 (for Roman and Hellenic factions).


In this guide I will be discussing why the level 4 city square is grossly overpowered compared to the level 5 city square and why you should delay leveling up your city if it is in danger of attacks by the AI.

Ideally if you are defending from much larger (or even multiple armies) you will bunker down in the city square and I feel like the layout of the town squares of the two cities speak for themselves (however I will still comment on them):


As you can see there is only two points of failure here. There is only one street on the north that is outside the infinite morale city square area which is not enough for the enemies to get substantial breathing space. The streets are narrow allowing them to be defended by 1-2 units without ever being afraid of being flanked. The only way to be defeated here is for your soldiers to somehow be completely overpowered by the enemy and be eliminated to the last man, something that is very hard to happen for reasons I will go through a bit later. 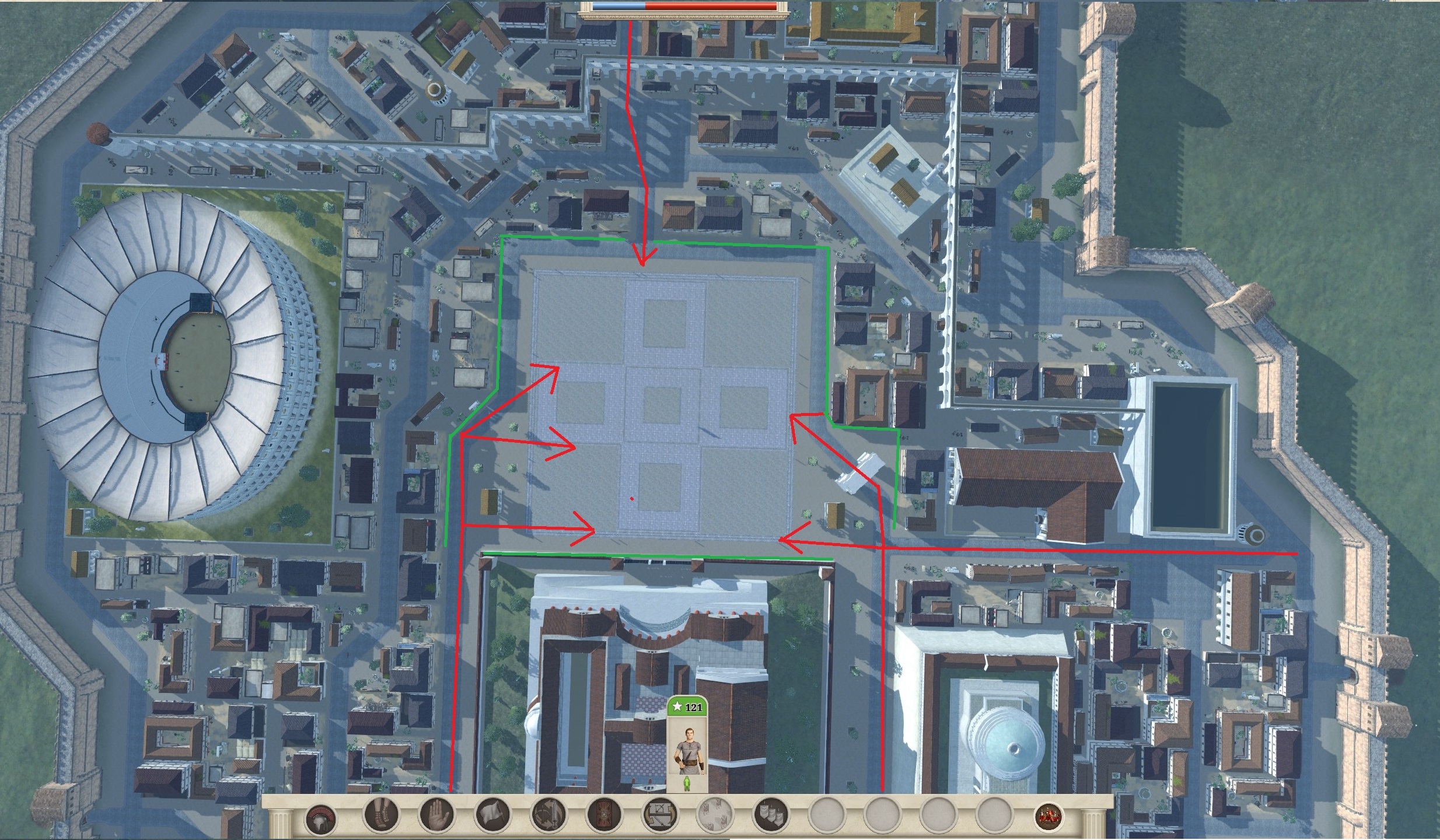 
The level 5 city square is a massive downgrade from its level 4 counterpart. As you can see there is now 3 points of failure which is already a big problem for that stage of the game. But the problems do not end there. There is a long wide street that surrounds the infinite morale area on the left, top and right specifically. That forces you to either defend the streets by placing your troops outside the square or alternatively to build a massive front line in the square, either way it puts you at a disadvantage compared to the level 4 square. The opening at the top is the easiest to deal with since it is pretty straight forward. However the openings at the left and right are far more tricky. A massive arc of triumph blocks the line of sight of your archers, and the enemies can spill in the square from multiple places requiring you to spend many more units to achieve the same thing you could achieve in the level 4 square with just 4 melee units (minimum).

But wait, there is more. As it turns out the overall city layout is also much superior for level 4 cities as well!

Yea you heard me right. Even without everything we discussed in the previous segment, level 4 cities simply grant you much better defense. Let me explain: 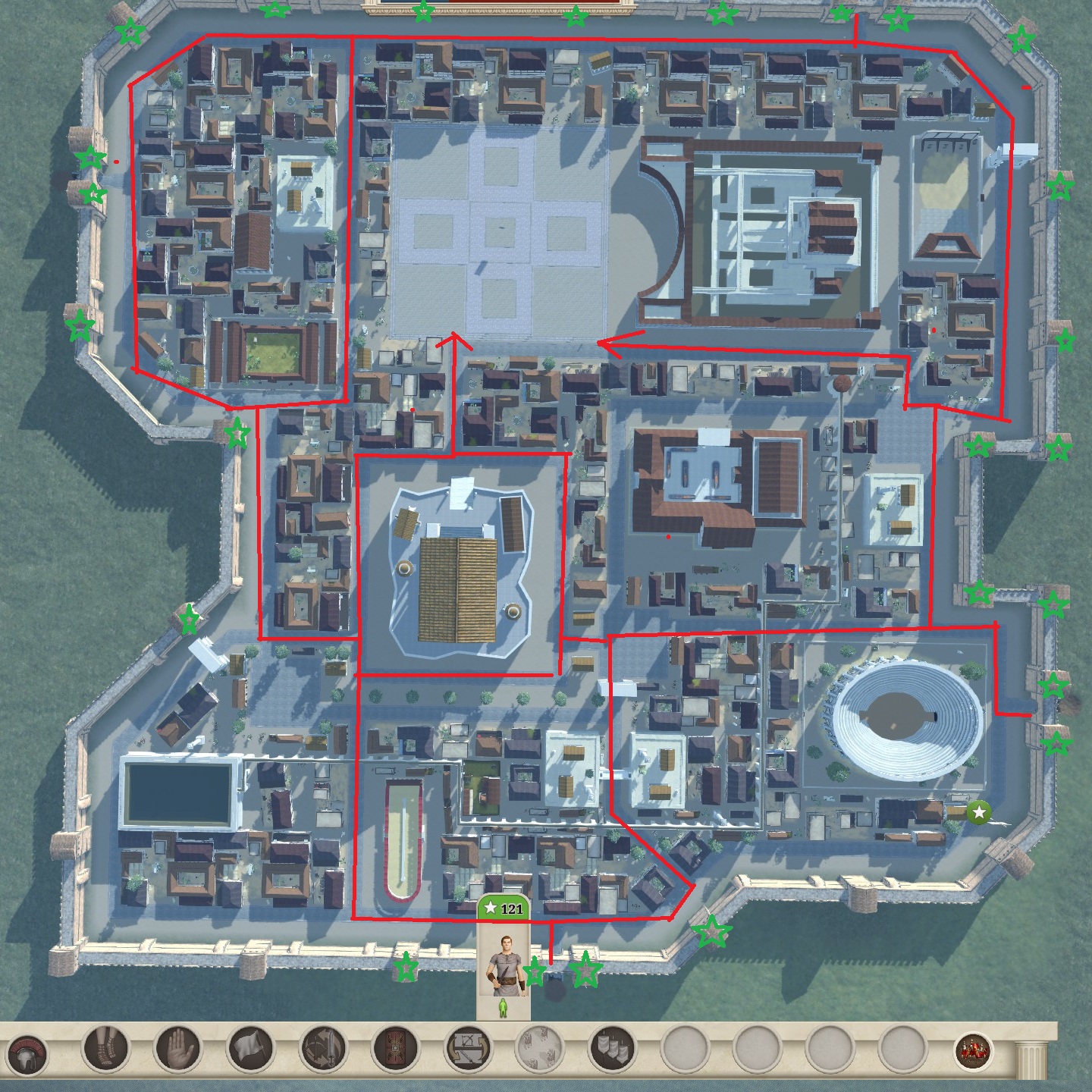 
The Level 4 city is built like a damn fortress in every sense of the word. The enemy pathways are extremely complicated. I could imagine an actual city planner having nightmares over the way Level 4 city is built. It all boils down to two factors. Long labyrinthine streets and towers. The long streets will exhaust your enemy and disorganize them. Get used to fighting wave after wave of exhausted disorganized units, attacking one by one with absolutely no tactics what so ever. That in combination with the towers is what seals the deal. You see, towers in this game shoot inwards, towards the city, the only way to stop that from happening is by sending troops to capture them, something that the AI doesn’t know how to do besides at the main gate. As a result the enemy troops are forced into the death march until they reach you. Every single green star on the map is a tower that will certainly be active depending on the route the enemy takes. It is common for the enemy to have lost up to 50% of its invading force before any enemy soldier reaches the square. 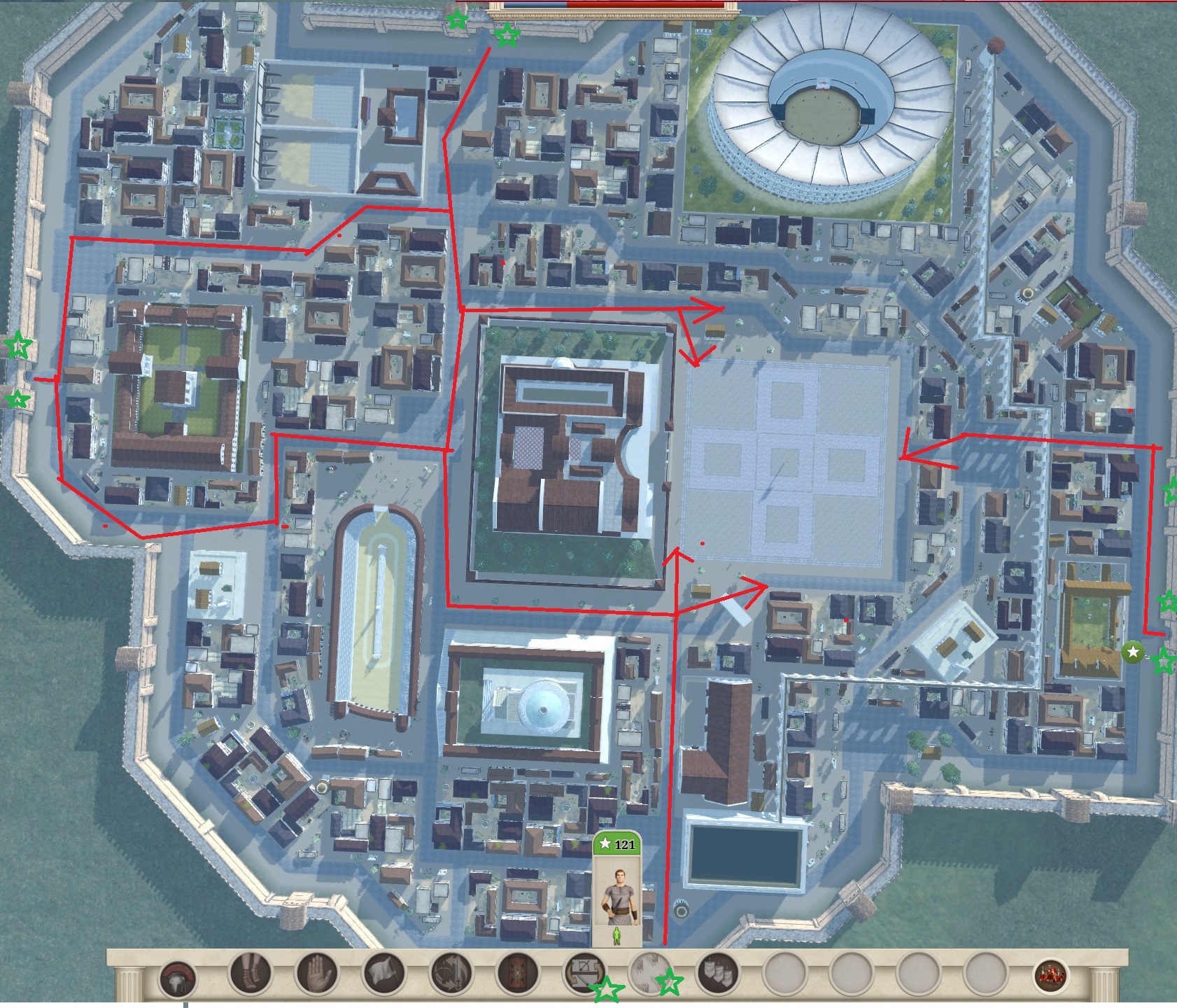 
The Level 5 city layout is as much of a joke as its city square layout. It is an absolute disaster. You will notice the bottom, top and right enemy positions have a DIRECT route to the main square!!!! They don’t have to sweat at all to reach you and there is only a tiny amount of active towers to help you thin out the enemy numbers. If you are fighting in a level 5 city you will have to face a fresh, untouched and in many cases highly organized enemy army which is certainly not a fun time.


Disclaimer: It should be noted that these paths outlined are the primary enemy paths. The AI of Rome Total War: Remastered tends to at least try to be sophisticated hence it will assault the city from multiple sides, it can destroy walls, if it possesses artillery it could knock out a tower or two. So there is always gonna be some variation to the plans outlined above.

OK but what is the plan to defend my Level 4 city?


For one you will need some solid melee units to clog up the two openings. Legionaries of any kind work perfectly in combination with a few auxiliary spear units for Roman players and tier 2 and up Hoplites/Phalanxes are perfect for Hellenic players.

Infantry tip: This is the way I tend to place my units, creating an Λ shape instead of just blocking the street with a unit in my experience tends to break enemy morale faster. Don’t forget to activate fire at will for legionaries if you are facing tougher enemies. I would also advice to use guard mode.


You could definitely defend yourself effectively with just melee units, however if you wanna get an edge you should probably include some missile units and cavalry.


Archer tip: If you are using archers make sure to disable “fire at will”. If you don’t, archers will start firing at enemies that haven’t reached the square yet in very uncomfortable and ineffective angles, wasting ammo. Personally I would micromanage the archers to only fire at the units that are coming from the two entrances to the square.


Cavalry tip: Only use your cavalry on two occasions. 1) When your infantry is getting overwhelmed, a good cavalry charge can create some beautiful mass routes and 2) To run down retreating enemies so you don’t have to see their ugly faces again in the next turn. Be careful around the wall gates however, if they are captured by the enemy they could start firing at you.

So lets test this out!

I created the average late game Roman garrison and put it up against a rather formidable objectively superior late game Egyptian army just to quickly show the results: 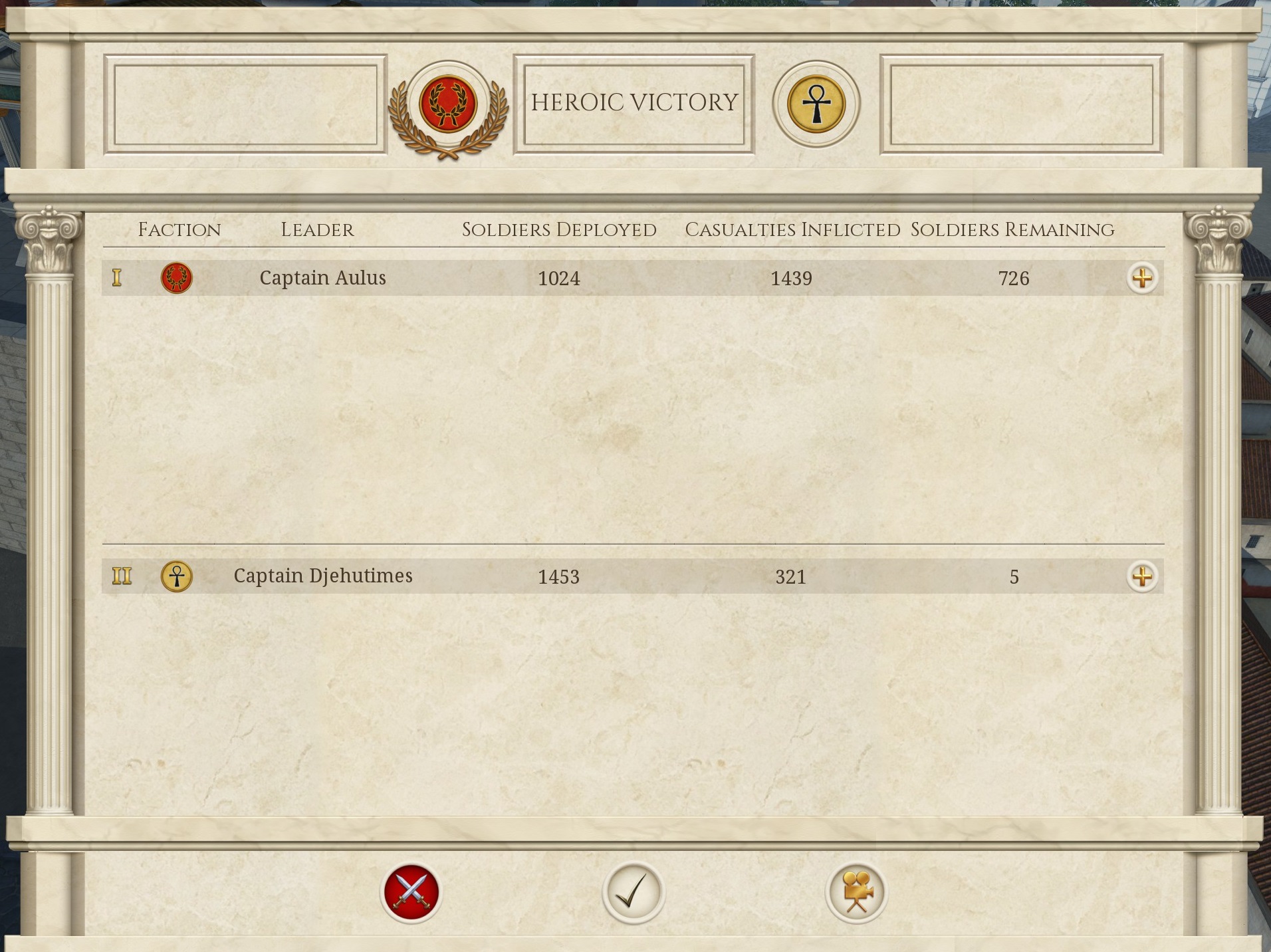 I know this is anecdotal, however I have been able to defend against 2-3 massive late game enemy armies with this strategy with similar results. The only times this strategy fails in my experience is when you are caught by surprise with like two auxiliary units meant to just keep the lights on and nothing else by a massive enemy army. But at that point there is really not much to do.

So what do we get out of this?


1) Do not upgrade Level 4 cities that are under threat by the AI during the late game into Level 5 cities. If you do so you will have a hard time defending yourself.


3) The late game AI is an absolute nightmare, constantly throwing high level troops at you in grotesque quantities, not giving you any room to breathe and re-train units, constantly dragging you into non-stop grading fights that are bound to bore you out of your mind. Especially if you are playing as a Roman faction dealing with the Egyptians and the other Roman factions, which can be a nightmare. This particular tip has helped me a ton on three occasions:

a) Fighting the Julii in Western and Central Europe.

b) Fighting Egypt in Asia Minor as the Brutii

c) Fighting the British as the Julii in mid-game


This strategy might be bordering on what we would call “cheesing” since you are heavily relying on bad pathfinding causing your enemy to self destruct. However all things considered about the late game, personally I don’t find it unethical. I mean, are you gonna try to “honorably” defend your city outside of the main square when Egypt spams you with constant sieges on near every turn? I mean, you could but you are gonna have a bad time.

Hope you enjoy the post for Total War: ROME REMASTERED Defense Guide for Romans and Greeks Strategy, If you think we should update the post or something is wrong please let us know via comment and we will fix it how fast as possible! Thank you and have a great day!