This Guide is an updated version of my old Guide, and includes two versions of the new map, one without spoilers, and one with spoilers.

My old Guide can be found here.

There are links at the bottom of the Guide with more detailed information one where all the Crashed Remnant Ships and Loot Crates are located. 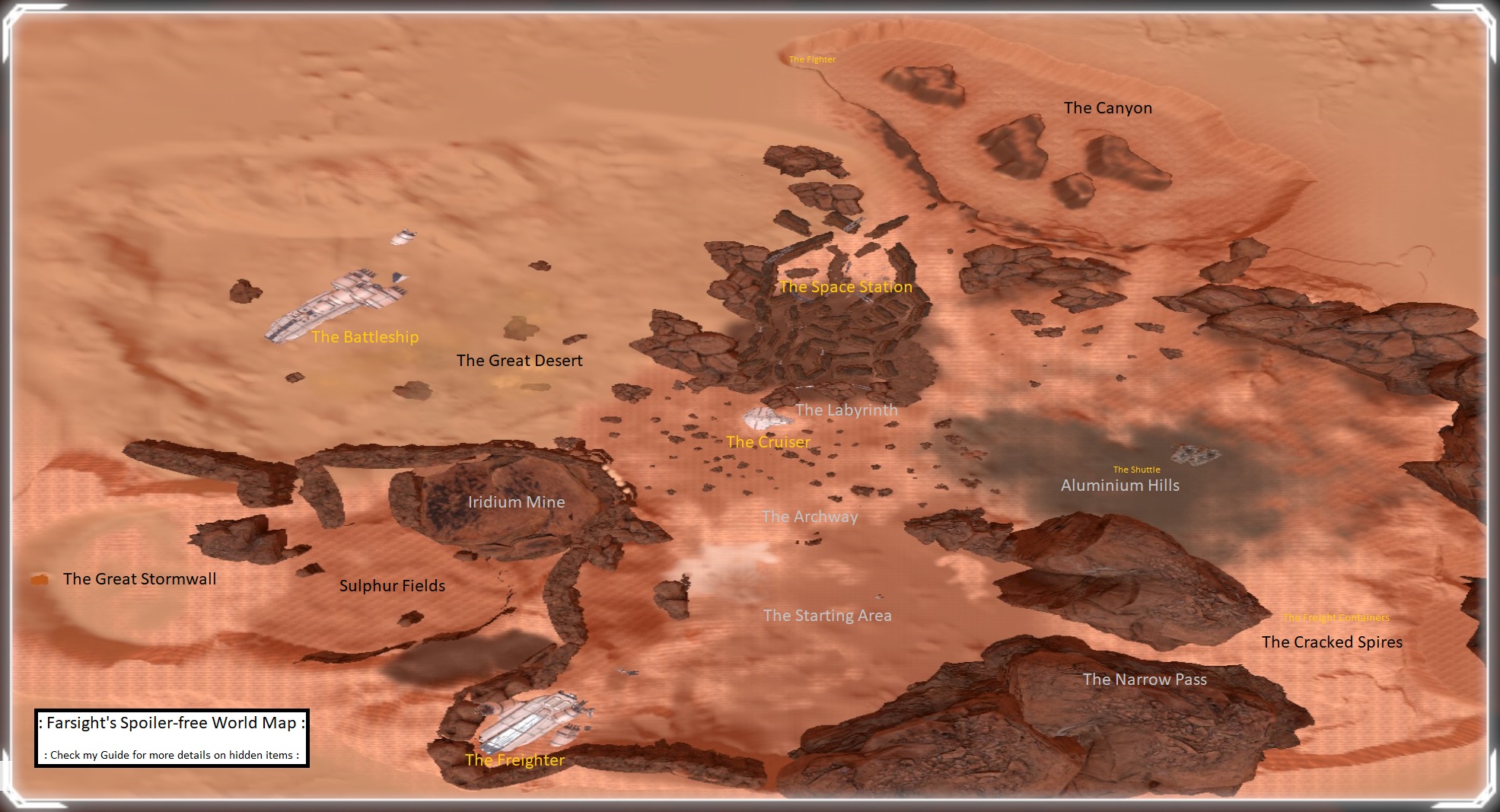 The map with spoilers can be found after the Regional Information.

However, I will say that CoDena01’s map does contain some massive end game spoilers, so if you do click on the link below you will see end game spoilers regarding the effect that your terraforming will have on the planet.

This is the starting area where your Escape Pod first lands, and where most players typically build their first base. Since the area becomes flooded once the ice melts, it’s highly recommended that you keep any bases built here small and compact.

The main reason why most people recommend building a small mining base here despite the encroaching flood. This area is exceedingly rich in resources, Cobalt, Ice, Iron, Magnesium, Silicon, and Titanium can all be found here in great abundance.

This area is largely dominated by the Crashed Freighter, and really only serves as a transit point between it and the Underground Cave Tunnel that leads to the Sulphur Fields.

The area is very sparsely populated with the same resources that can be found in the Lakebed Starting Area, the biggest concentration of which is near the Underground Cave System entrance.

The tunnel connecting the Iridium Mines to the Sulphur Fields is little more than a resource-less archway, and is blocked off by unbreakable Ice that must be melted via Terraforming to gain access. Once the way has opened up, this particular tunnel is known as the “Iridium Gate” and is considered the primary route to the Sulphur Fields for players based near the Shoreline.

The tunnel connecting the Steep Hill to the Sulphur Fields is blocked on the Steep Hills side by unbreakable Ice that must be melted via Terraforming to gain access. A secondary wall of ice stands at the midway point, which again must be melted melted via ever greater Terraforming to breach. Once the way has opened up, this particular tunnel is known as the “Sulphur Gate” and is considered the primary route to the Sulphur Fields for players based on the Lake.

As mentioned above, the Iridium Gate has no resources.

Not so much a biome, as a boundary. The Shoreline marks how far the water levels rise, and at which point it’s safe to build without risk of your base getting flooded.

Typically this is where everyone builds their main base. The area is large and flat; Excellent for almost any base design. This is also the most central location, with commute times of roughly a minute or less to any biome from here. The Crashed Cruiser also resides here, a somewhat underwhelming remnant wreck with half a dozen blue crates, and no terraforming equipment to deconstruct.

The area is peppered with a large amount of basic resources that are required by most structures and Terraforming equipment, Cobalt, Ice, Iron, Magnesium, Silicon, and Titanium can all be found here.

While visually impressive, Cracked Spires is a relatively small biome containing three giant shipping grates, only two of which are accessible, sadly the loot in these remnant wrecks is underwhelming to say the least. No, the real prize attraction of Cracked Spires is it’s Underground Cave System.

Cracked Spires has an average amount of resources, the usual suspects Cobalt, Ice, Iron, Magnesium, Silicon, and Titanium can all be found here.

A dark and dreary place that, despite the games lack of monsters, many players have reported a sense of unease and an increased BMP rate. Although, that might be because, as the name suggests, Aluminium Hills is full of the much coveted Aluminium, great big giant chunks of the stuff, that said it isn’t mine-able in this early version of the game.

While the large chunks of Aluminium are a no go, there are plenty of smaller pieces scattered throughout this biome that can be mined, alongside the traditional Cobalt, Ice, Iron, Magnesium, Silicon, and Titanium. It is worth noting that the Aluminium deposits found here have a much darker colourisation, almost appearing like Magnesium from a distance.

As the name suggests, the Iridium Mine is full of Iridium. However, unlike the cave in Cracked Spires, where the Iridium is all clumped together, here the Iridium is spread out far and wide, even embedded into the walls and stone pillars. The Cave has three tiers, each of which has sloped edges near the centre which allow access between tiers.

A great abundance of both the much coveted Iridium and Aluminium, along with the core resources of Cobalt, Ice, Iron, Magnesium, Silicon, and Titanium.

The entire area is blanketed in a dense fog that makes it difficult to see resources on the ground.

Sulphur (called sulfur in game) is predominantly found here, and unlike the Sulphur found in cave systems, the Sulphur here will regenerate slowly over time just like resources found in other biomes. You can also find Aluminium, Cobalt, Ice, Iron, Magnesium, Silicon, and Titanium here.

Originally this area had quite a few names, so before I made my map I called for a popular vote on our Discord to decide on something concrete. There were A LOT of suggestions at first, but eventually “The Great Stormwall” was the most vaunted pick by quite the hefty margin. However, despite the popular vote, a few particularly snooty players have refused to recognise the majority decision, so expect this area to be occasionally referred to by other names.

The most predominant feature of The Great Stormwall is the great stormwall that covers the entirety of it’s northernmost edge. Concealed behind this sandstorm wall, roughly near the midway point, is an Underground Cave System that contains both Osmium and Sulphur, but is blocked by ice that needs to be melted via Terraforming.

At first glance it might seem like the area only has Cobalt, Ice, Iron, Magnesium, Silicon, and Titanium. However, you can find Super Alloy concealed by sandstorm wall, spaced a few metres apart running the length of the Stormwall.

A two tiered biome, the Labyrinth is maze of tight corridors and frequent dead ends, it is very easy to get turned around here without a compass, so it is recommended that you bring one.

The first tier has Aluminium, Cobalt, Ice, Iron, Magnesium, Silicon, and Titanium. The second tier has Super Alloy, and can be accessed near the Crashed Space Station near the south-east corner of the biome.

The Canyon, a deep impression that goes down as deep as the Lakebed starting area, but strangely enough doesn’t flood, instead little puddles form scattered throughout the area. A small remnant wreck can be found in the north-eastern corner.

There are a few Blue Crates scattered around, alongside the usual suspects Cobalt, Ice, Iron, Magnesium, Silicon, and Titanium. 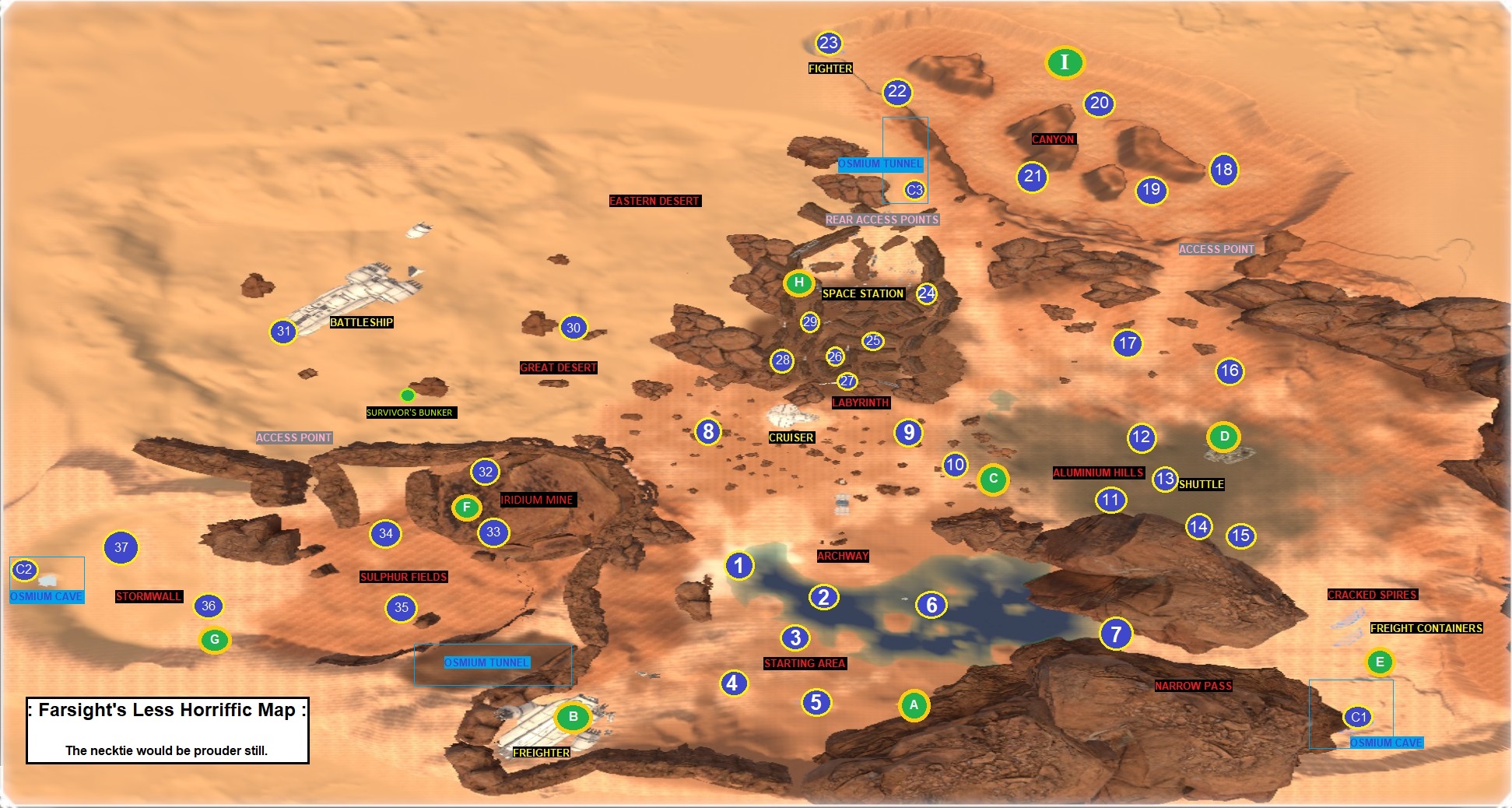 A to I = Golden Chests

Hope you enjoy the post for The Planet Crafter World Map Walkthrough + locations Blue and Gold Loot Crates, If you think we should update the post or something is wrong please let us know via comment and we will fix it how fast as possible! Thank you and have a great day!