Run the CD version of Arena on Steam with overlay.

Where to get Arena CD Version and Installation

First you need to download the ArenaSetup installer in order to have the CD Version of the game.

Once downloaded run the installer, and make sure to rename the installed folder to DOSBox-0.74.

Also be sure to also select an install location outside of Steam’s folders. This is to prevent the install from getting removed in the event that Steam runs a verified install check of Arena.

Adding the CD Version to Steam

Next go to where you installed the CD version of Arena, and copy the now named DOSBox-0.74. folder.

Go to Steam’s installed location for Arena, and rename the DOSBox-0.74 folder to DOSBox-0.74-bak.

Paste the Arena CD version that is named DOSBox-0.74 into the folder for the Steam version of Arena.

Steam will now launch the CD version of Arena, but please note that if a verified check, or an update happens it will make changes to this folder. It’s a good idea to make a backup copy of this folder once you are done playing. This will allow you away to easily restore the CD version in case this happens.

Before we launch the game in Steam it’s time to edit the DOSBox config for Arena CD. Open the DOSBox-0.74 folder, and look for a file named DosBox.conf.

Now open the DosBox.conf file with notepad, or notepad++, and look for output=surface 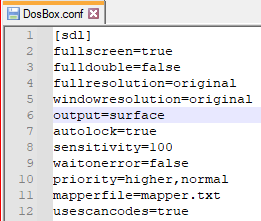 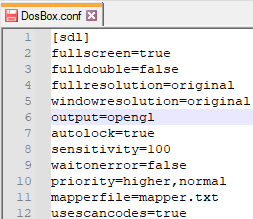 This will allow Steam’s Overlay to work in DOSBox, and thus allow you to take screenshots. Note you may need to change Steam’s default screenshot key as the default hotkey may cause a conflict with ether a default game keybind, or DOSBox’s built in hotkeys.

One more thing to note is that if you change fullscreenresolution=original to fullscreenresolution=1920×1080, or any widescreen resolution you will get a black border as the game will run in 4:3 aspect ratio. This will also allow artifacts to happen from Steam’s overlay when taking a screenshot. If you want to remove the artifacts press alt+enter to window the game. Then press alt+enter again to fullscreen the game to remove the artifacts.

Now we will change the default cycles settings for DOSBox so that the game will run faster. In the DosBox.conf scroll down to CPU, and look for the line cycles=fixed 20000

You can always go back and change the cycles to be higher, but from my own testing having the cycles over 40000 the game will sometimes have issues running properly. For example; the jump keys won’t work properly to the point that you may not be able to jump at all.

Finally I will link you to a guide that will contain a download link for remapped keys.

One you have installed the remapped keys you are now done, and ready to play Arean CD version on Steam.

Be sure to read the game’s manual before you play. It’s a good way to understand how the default controls work. Thankfully the ArenaSetup installer included the game’s manual as a pdf file. This file is located in the Docs folder inside the renamed Arena CD folder now called DOSBox-0.74.

So you can always go to that folder when needed to read the game’s manual. Along with other files that could be useful to read.

Hope you enjoy the post for The Elder Scrolls: Arena Configuring Arena CD version for Steam UPDATED, If you think we should update the post or something is wrong please let us know via comment and we will fix it how fast as possible! Thank you and have a great day!