This guide has some tables of the basic information about various facilities in Surviving the Aftermath. In addition, some considerations about efficiency (water, energy, food, and entertainment value) are included on this guide as well. I hope this guide will be useful to you. 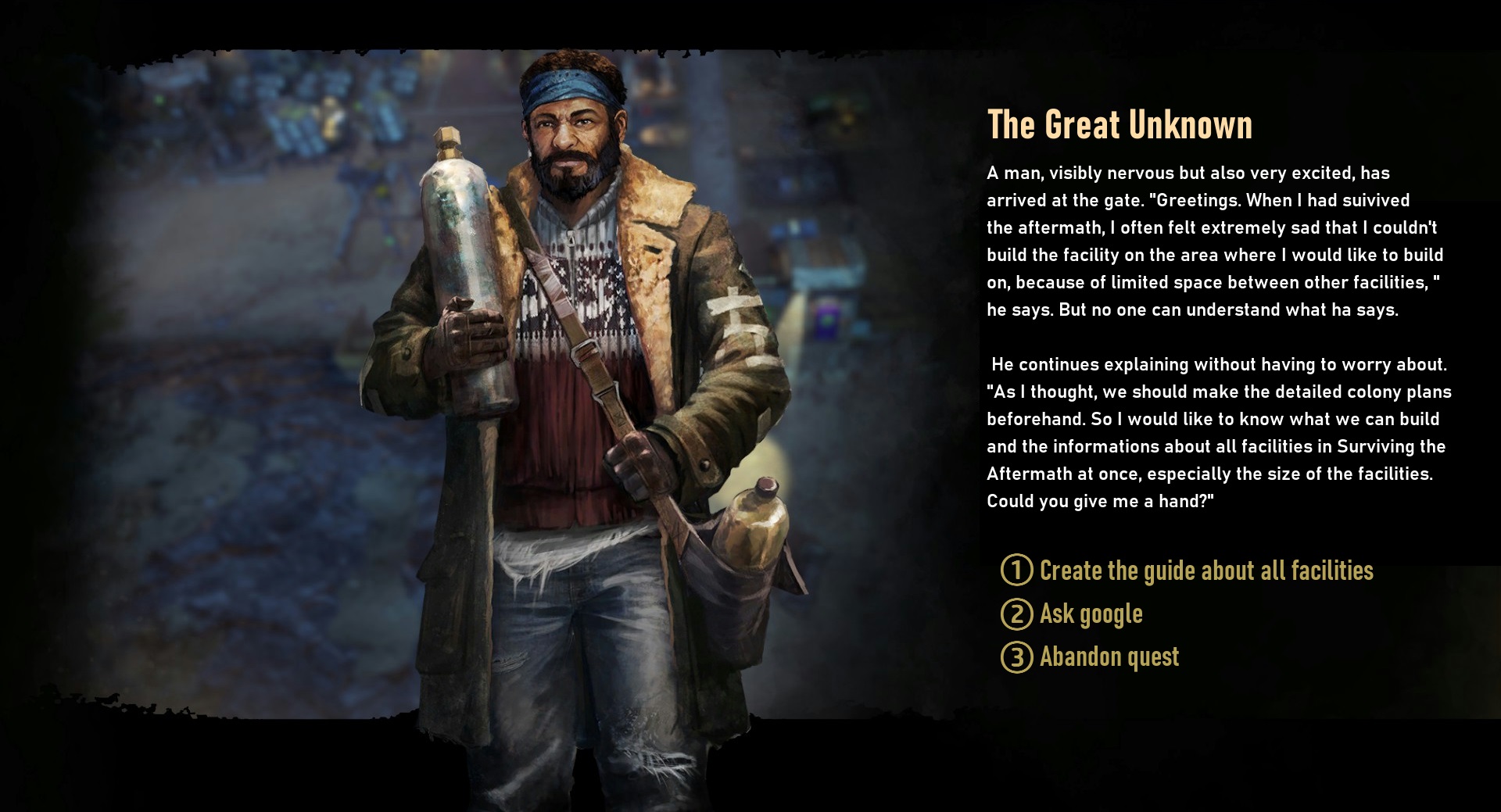 Commentary on This Guide

When you look up the information in this guide, please refer to this commentary. 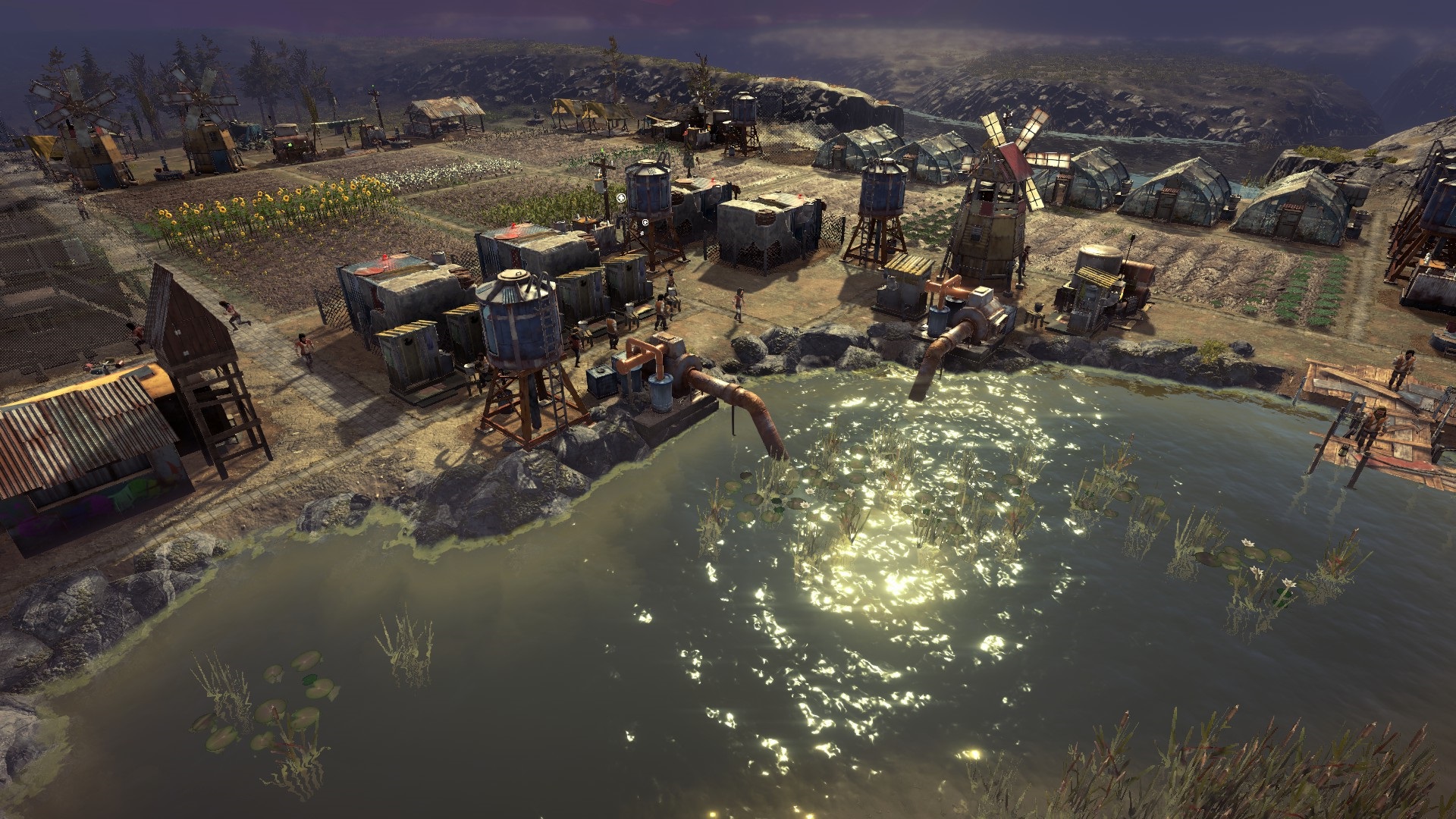 The Crowded Tent has the highest level of efficiency per 1 tile in the Shelter category. But its Comfort is the worst degree and makes mood of the colonists getting worse. After all, you should build the House or the Two-story House in the end, if you don’t restrict yourself in any way.

The efficiency per 1 tile is different in a kind of materials. Stockpiles is the highest level of efficiency for storing the resources like Wood, Plastic, and so on. Meanwhile, General Storage is the best for Foods, Clothes, and others.

About the efficiency of each vegetable

In conclusion, considering both of the Yields per 1 tile 1 day and the Yields per 1 worker 1 day, Peanuts is the highest level of efficiency. Farming Peanuts in Green House would be ideally the best way to gain large amount of vegetable if you can.

But if you don’t have enough components for building Green Houses, you should farm on fields, then, carrots, corn, soybeans (and Wheat) would have better efficient.

When I considered the yield efficiency of all vegetables, I had realized one thing.

The status that some vegetables have in game is NOT correct.

May the statuses of vegetables in game be flavor texts, by any chance?

Then I have tried to get true status about these vegetables from measured data.

In conclusion, the true status of them is like below.

Left side of the table is the status in game and right side is practical true status. I have determined these true statuses by setting a standard at Corn, which relatively seems to have a correct status.

#3:must be built on shore, and unusable during Fallout 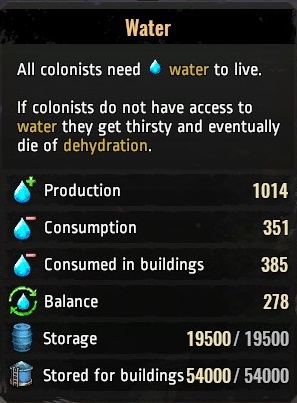 The Water Consumption (except ‘consumed in buildings’) is calculated by the formula below.

Considering Water Efficiency, Drilled Well which needs no Energy has the highest level of efficiency per 1 tile. However, Drilled Well must be built to have some space between other well and that’s the only drawback. And Water Pump has better efficiency than Bore Well. (In my opinion, I like to build Bore Well as well, because it is constantly stable even if during disaster.)

Therefore, the most efficient way for water production is that you may build as many Drilled Wells in your colony as you can at first, moreover building Water Pumps on shore, and Bore Wells at somewhere to make up for insufficient amount. 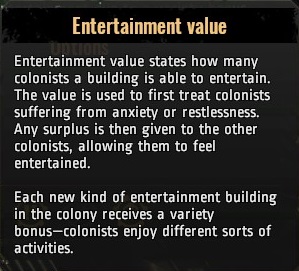 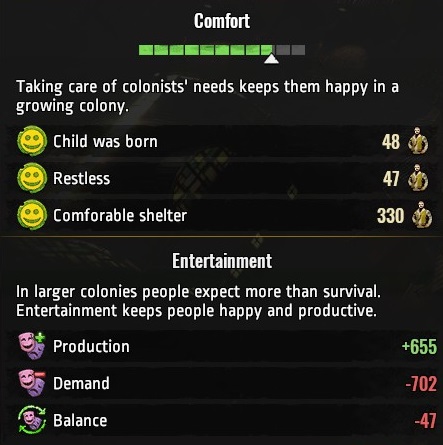 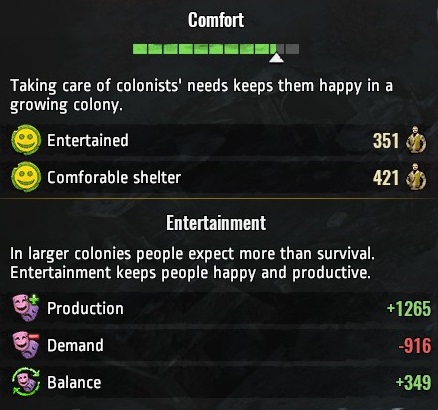 About ‘a variety bonus’

In the Happiness category, Game Arcade has the highest level of efficiency. Both of the efficiency per 1 tile and per 1 worker are the highest. However, Game Arcade need a large amount of components,about 85(!), when you build it. So it is very difficult to build a lot of Game Arcades even near the end of the game.

Meanwhile, Memorial has better efficiency per 1 tile too. Thankfully, you can build Memorial esier than others. But the efficiency of Memorial per 1 worker is the worst. If your colony doesn’t have enough workers, building a lot of Memorials causes shortage of the workers. Anyway, you should be careful about it.

#4:The Solar panel and the wind turbine(including large ones) will halt during magnetic storm. Meanwhile, other Energy facilities won’t halt then.

In Surviving the Aftermath, all generators which you can build now are only solar panels and wind turbines.

Out of these energy generators, the most efficient generator is the Wind Turbine(small one). To put it strongly, it is an easy way for stabilizing your colony that you just build only Wind Turbine. (However, in my opinion, I love the magnificent scenery of the ‘Large’ Wind Turbine standing on a row.(≧▽≦)) 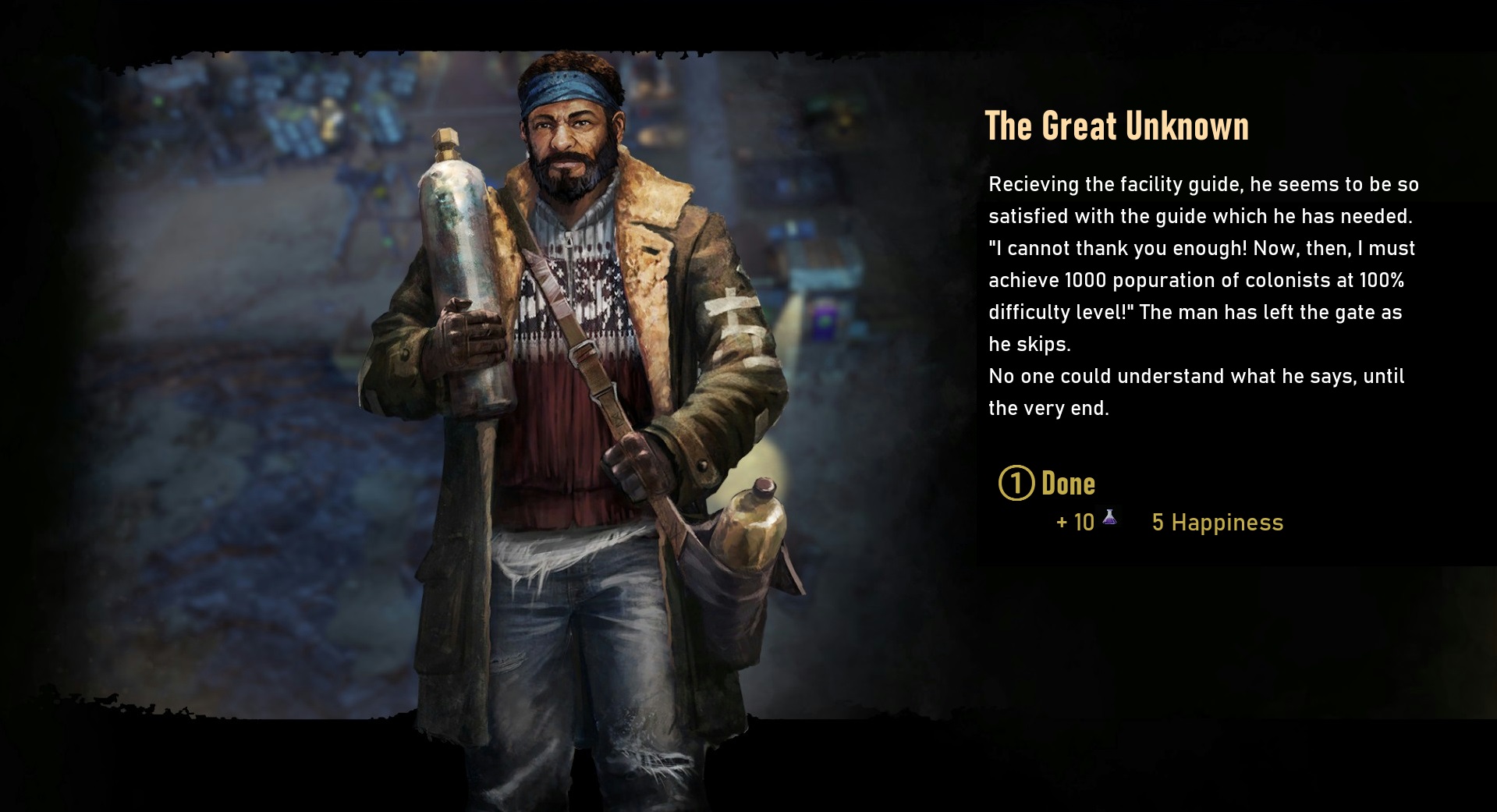 Thanks for viewing this guide and thanks to all concerned with Surviving the Aftermath.

As you know, I’m not good at writing a sentence in English. If you don’t understand what I try to express, please make up for them with your imagination:-) 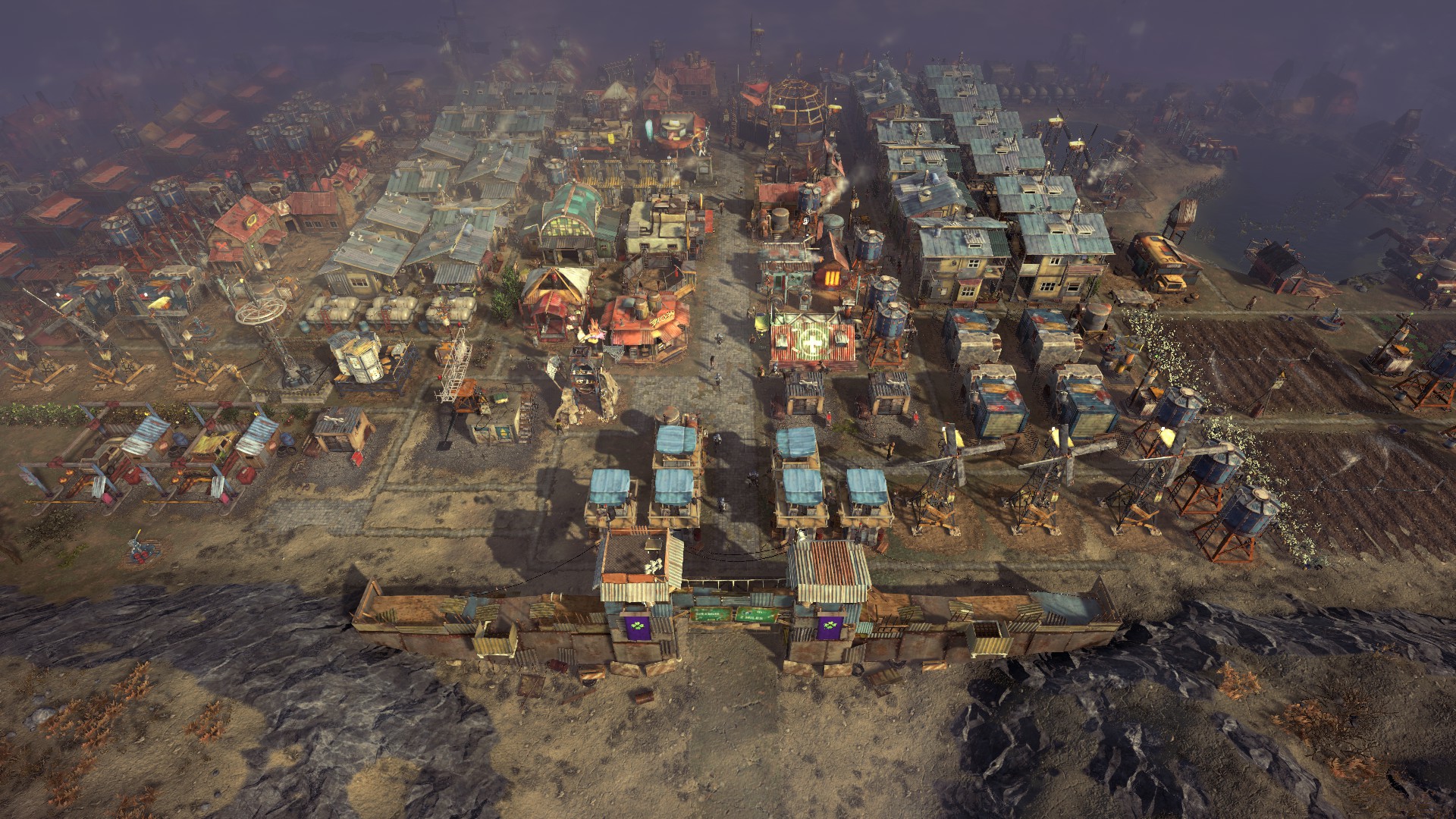 Here we come to an end for Surviving the Aftermath Gameplay Tips & Basic Crafting Information – Walkthrough hope you enjoy it. If you think we forget something to include or we should make an update to the post let us know via comment, and we will fix it asap! Thanks and have a great day!