This guide contains basic tips and information for beginners

The first 20-30 minutes of the game are the hardest. This is not a joke. Once you have a inventory box, it goes rapidly “uphill”.

In addition, you can get to the inventory box of your choice within the mansion in significantly less than 60 seconds from the entrance hall of the mansion – provided the necessary doors are already open. (It’s actually even less than 30 seconds!) So at the beginning you are much closer than you think.

Why do I mention this here? Well I’ve been reading the forum for some years and these are always points that some people just don’t want/can’t understand. Then they stop immediately and say that it is stupid or too difficult, you only have to keep calm for 30 minutes – including getting lost.

Whoever starts the game for the first time is nonsensically asked whether he is a mountaineer or the like, and that with totally misleading text.

With the wrong answer, you will be upset when you complete the game for the first time.

The save system has unfortunately not been modernized in any way, which is why you have to constantly load the old saves before you start something new. If you are not careful, you will quickly lose some significant progress.

The separate ones are to avoid a suicidal enemy named Forest Speyer (see Unlocks: Modes). At the same time, they serve as a kind of backup in that at least one character is still present. The shared save slot can then be used for the (main) experience including mentioned enemy.

Such a shared save is quickly created when you have completed it with one of the characters.
The third save slot for the other character can be created another time – it is up to you whether you overwrite the “single saves” or rather leave it. Things are going very well with Forest Speyer and it’s fun, it’s just a bit more stressful if you don’t know his spawn points and and behaivor.

The game uses pre-rendered graphics and so visually there isn’t really a difference between 1080p, 1440p and 2160p.

However, you may have to edit the ini file with the actual desktop resolution to avoid a black frame.
The storage location of the ini file is:
C:\Users\*Username*\AppData\Local\CAPCOM\Resident Evil – [email protected] REMASTER
Replace *Username* with your Windows Username. For example: C:\Users\HansDampf\AppData\… etc..

What used to be the reason for very good graphics is unfortunately in a certain sense a really bad choice … Nevertheless, it still looks very good, if you don’t get stuck on any high numbers on data sheets.

* If someone is bothered by their mouse: just move it to the lower right corner. Windows is designed to have space on the right and at the bottom of the screen so that the mouse can be hidden there. This is possible with high DPI and with extra large mouse pointers. With custom mouse pointers, you have to make sure that their proportions, including their effects, are correct. A mouse pointer whose glowing effect shines insanely is therefore difficult to hide.

Each character has its own advantages and therefore disadvantages.

Chris, for example, has more power than Jill, does more damage and has a lighter by default without wasting space in the inventory, while Jill has, among other things, 2 extra slots in the inventory, is faster and has a lockpick. Personally, I prefer Jill. Always found the advantages of the female characters in the RE titles more tactically favorable.

There are other minor differences that are not worth mentioning as they are well compensated for. For example, Jill can play the piano while Chris needs Rebecca’s help here, which in turn takes a bit longer than with Jill.

Furthermore Jill has Barry as a helping hand and Chris has Rebecca for medical support.

You get used to the old and at first quite strange controls quite quickly, especially if you choose the alternative/modern controls instead of the old DPAD tank. Just play with it for 5-10 minutes and you’re almost completely used to it. You just have to get used to the fact that you don’t have to change the direction of your movement with every new camera angle and thus turn in a circle, but instead keep the stick position (movement direction). With the modern control, you can still use the tank controls with the DPAD (walking backwards, etc.), so there is absolutely no reason to focus on the tank controls when you can have both at the same time.

The type of puzzles in the classic RE titles are really something special. In a certain sense, the whole game is a self-contained puzzle, which is why all the keys and the like are required.

For this reason there are only two mundane tips from my side:

Stop trying to kill every zombie. Kill only those who are actually in your way, if you can not yet dodge or “knive” good enough. You need the ammunition in the beginning.

Strictly speaking, you only have to kill between 3 and 8 opponents in the whole game, depending on the playstyle. So you can see that the game offers hundreds of bullets – see screenshots – So there is enough ammo, but at the beginning you have to be thrifty.

Another little tip: Use shotgun and grenade launcher only for bosses and legged enemies (i.e. everything that runs on 4+ legs)
Hunters are also easy to bypass, as they take a long swing when they try to hit you. Just run past so that they just hit some air.

A run on ‘very easy’, in which everything was saved and only used the infinite rocket launcher – a bunch of grenades did not fit into the picture: 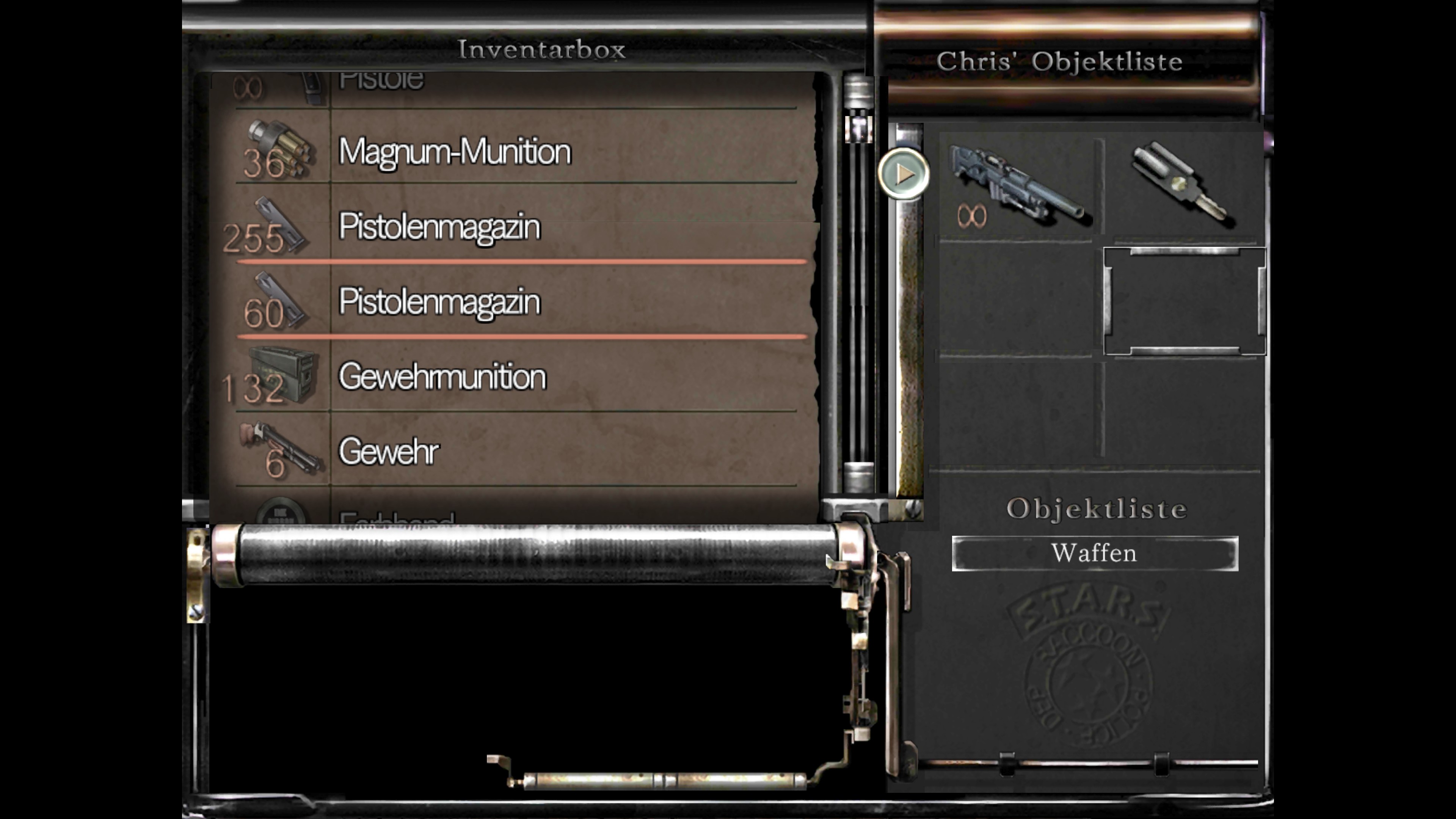 First run on ‘hard’ – save point at the last inventory box before the boss – this is only the ammunition for the last boss fight: 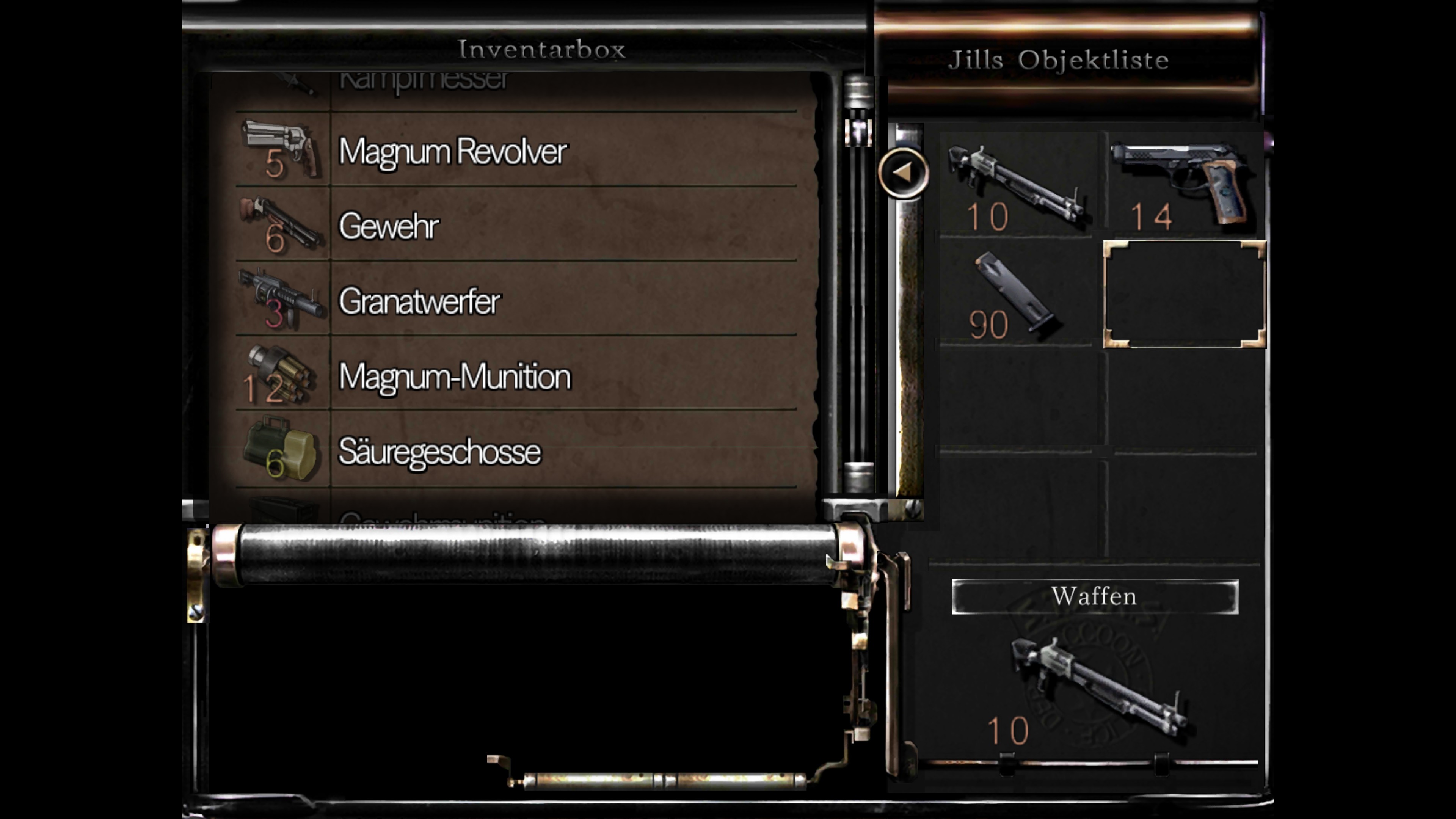 *The first zombie you meet in the game is best left standing as Jill. Runs back to Barry, he’ll take care of it, at the same time you trigger a whole range of useful help from Barry. (if you do everything “right”)
The first zombie is also one of the stronger types. That means he needs much more shots than other common zombies if you want to kill him. In any case, you do not have to kill him.

Without spoiling too much:

Only burn zombies in stairwells and hallways that you have to go through often, be it because of adjacent items or closed doors or a well-frequented save room. When it comes to enemies in RE: Out of sight, out of mind.
The fuel available in the game is definitely sufficient for the most necessary zombies. If you run out of it before then, something still has to be optimized.

Incidentally, there are different timers for burning them – depending on the level of difficulty.

BSAA costumes (from RE REV1 or RE5) is unlocked by default and can be selected at the beginning. But you can also wear them in the cloakroom.

Please also pay attention to the notes on the save system when unlocking stuff.

Weapon unlocks only apply to the ‘One more time …’ mode.
Minimum difficulty to unlock: Normal

How long does it take to complete the whole game?

For me it took about 55 hours (including the 3 save slots), although it wasn’t my goal to do it quickly on this platform.

Some need more time because they are new, because 20 years have passed or because they just take it easy, read all the documents, etc. and so on – and other players are faster because they still know the process or certain things are simply faster grasp or simply leave out.

If you have actually finished the game, you will receive the following message from Capcom in-game.

*If you want to avoid spoilers, don’t look at these pictures even it is in German language! 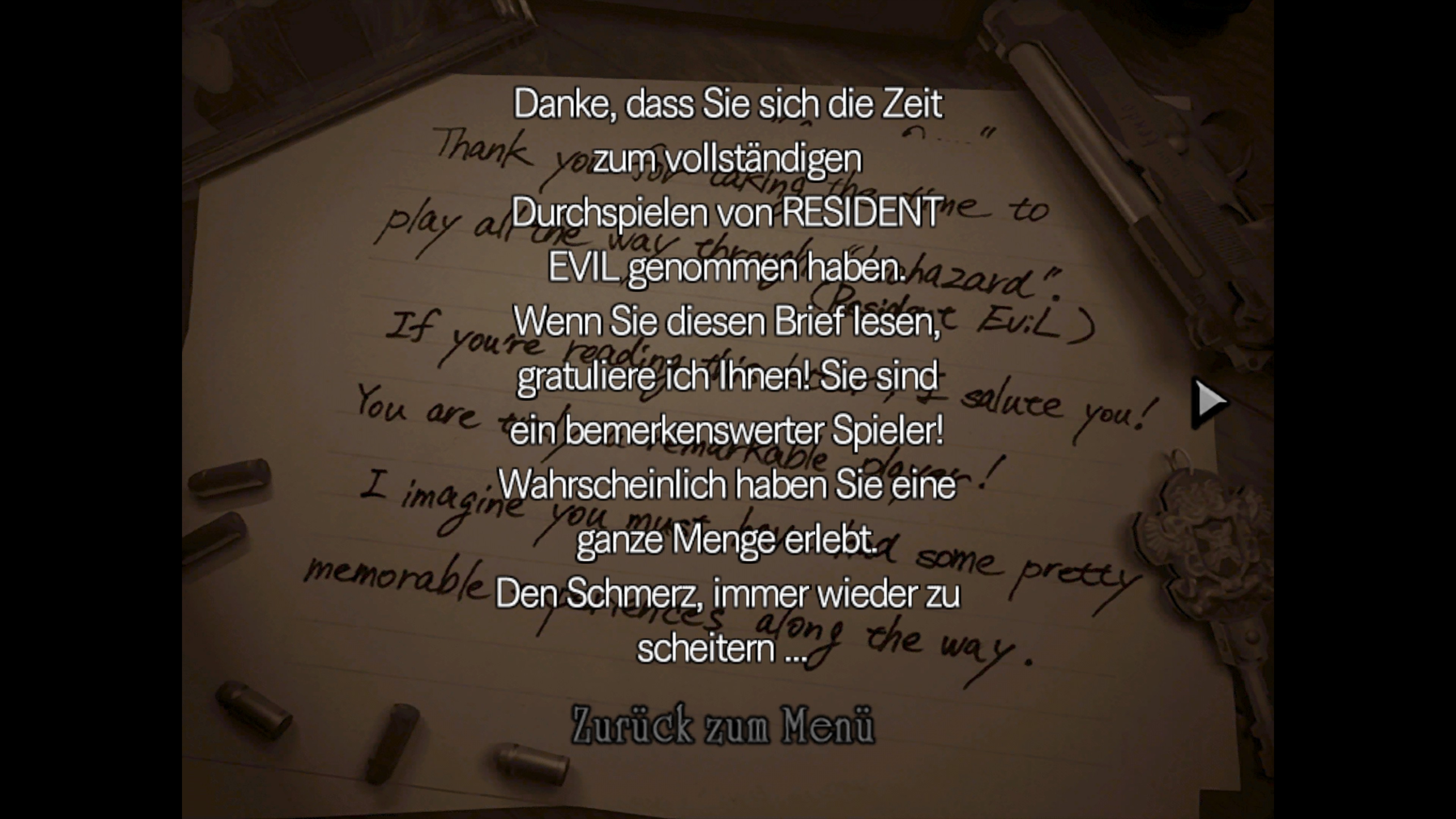 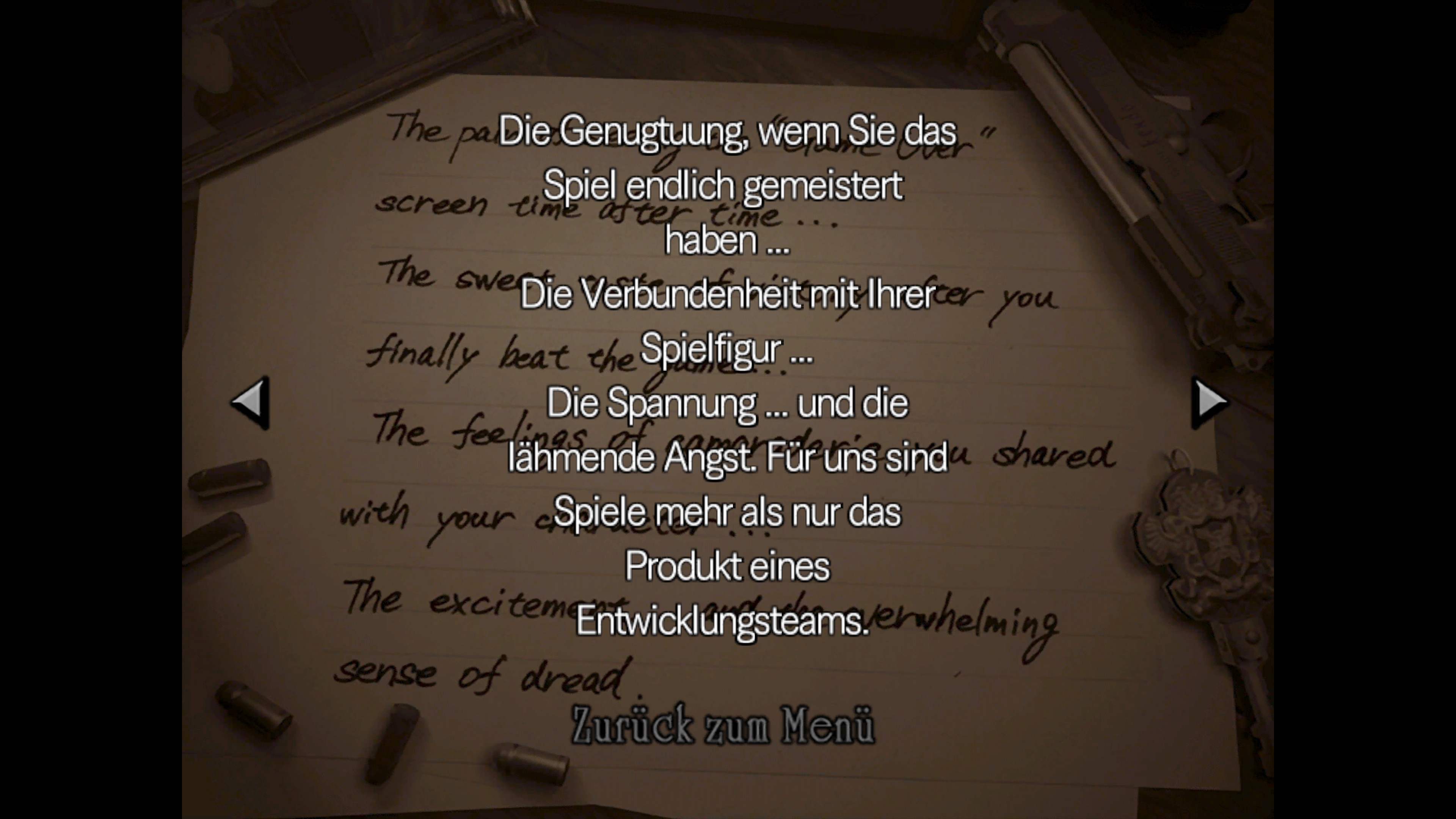 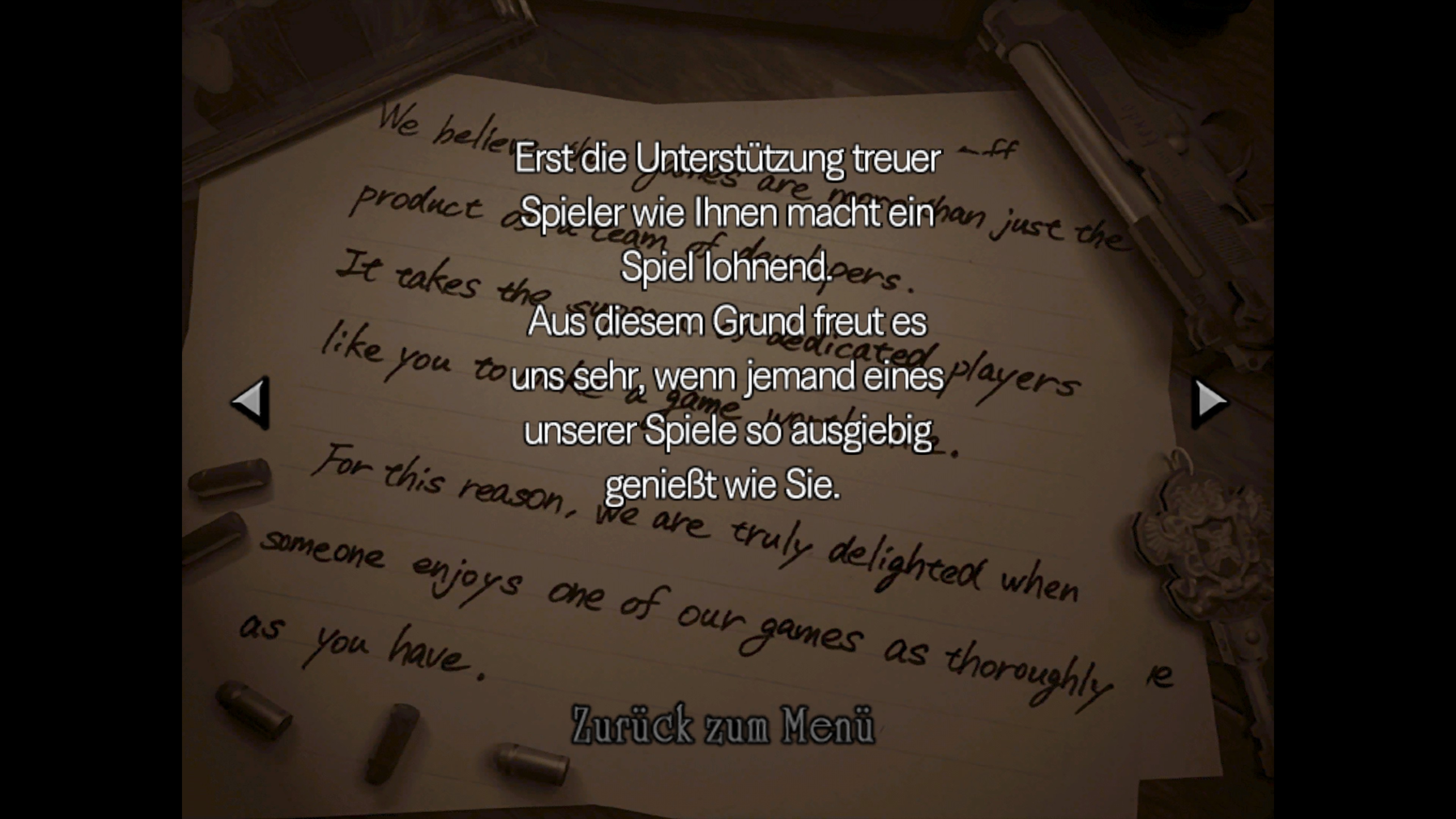 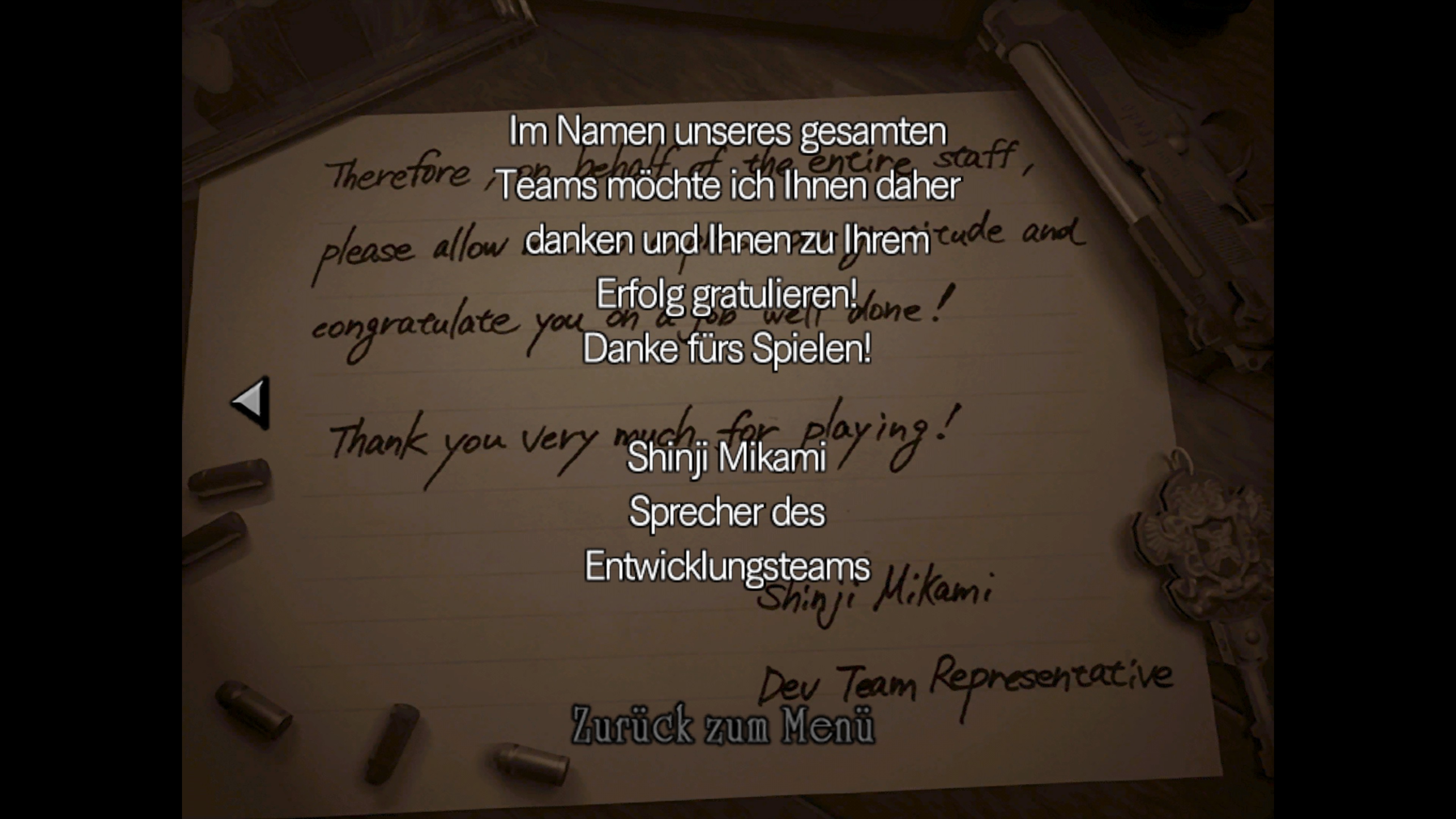 The “I’m giving up …” statistics

To make it clear how many people give up at the beginning, here are the statistics of the Steam version as of March 4th, 2020:

The first straight line, right at the beginning, will likely be players who were shocked by the controls. The first pike after the fall occurs at 6 – 8%. So you can see that a lot players have already stopped before. The peak in the middle is 48%. According to the mouseover feature, the top of the next peak is 71% and on the far right are just under 14k players with 100%.

According to Global Stats of Achievements, only 26.4% finished the game once on ‘very easy’ or higher. On easy it is only 21% and on normal it is only 11.4%. For both characters it is just 9.1%.
Only 76.9% killed their first zombie. And 66.5% died for the first time. Here, too, you can see that a damned number of players give up in the first few minutes. Overall, the statistics are unfortunately worse than most other games.

Yes, Resident Evil is more demanding than most of today’s games, that’s how most of the games were back then, and yes, it is sometimes strange when you compare it with today’s games (e.g. the controls), but if you pay attention to one or the other or spend 5 minutes on it, it’s just like it was back then, a very good game – which is why there are more than 20 RE titles today.

The probability that you will also give up, however, is low, because after all you are already showing that you want to learn or adapt. Not everyone does that. And the long ham here, you’ve apparently read too.
So good luck or whatever you need to hold on!

This is all for Resident Evil Basic tips and information hope you enjoy the post. If you believe we forget or we should update the post please let us know via comment, we will try our best to fix how fast is possible! Have a great day!