This guide contains a list of every type of level in the game with descriptions on what they do, tips, tricks, and more!

The most common and basic level. You will be given a number of enemies to defeat. Defeat them all to win.

In Multi Round, you will be faced with a certain number of enemies to defeat over several rounds. After you complete a round, the Bonus Speed will increase. All enemies in Multi Round are gray, so each enemy takes one hit.

In Perfection, missing will kill you. Other than that it’s just a normal mob round.

In Power Weapon, you will receive a power weapon (i.e Chainsaw or Light Sword) that you can’t drop. All enemies on Power weapon will be gray (because power weapons already make enemies gray).

In Deadly Target, you need to defeat targeted enemies. The kill will only count if the target is killed with throwing weapons though. Luckily, nearly every enemy is carrying a throwing weapon that you can take.

Instead of normal enemies, there will just be throwing weapons. Try to remember that weapons you dodge, deflect, or throw will take out the entire side of what you were aiming at.

Although I don’t think there’s an official name for this round, it does exist as it’s got its own map icon and it definitely does something. This is one of the easiest level types in the game. It spawns balls of death that have infinite “health”. So, you can just keep hitting the balls back and forth and usually don’t need to worry about missing.

In Horror Show, you have to kill enemies into stage props for the kill to count.

In Ghost, the player and bars are invisible, and your range is longer. I recommend you play this as if it was Wing Chun. Keep track of the middle by looking at the enemy counter at the top.

In Acceleration, the game will become faster as you play. There are no speed increase enemies, the game just gradually speeds up over time. The speed increase is not counted on your Bonus Speed and thus is invisible.

In Death Zone, you must stay in-between two walls. Misses will not count and will recover faster, so if you’re ever too close to a wall, you can just head in the other direction.

In Wing Chun, your range is 50% smaller. This is probably the hardest level type in the game because it also disables your skills.

Your bars will be moving around (decreasing and increasing range). These levels are extra painful. Try focusing on enemies on the longer bar (though keep an eye on the other side just in case).

Sawblades will rain from the sky. If you touch a saw blade, you’ll lose instantly. Missing does not count and recovers faster, so you can move out of the way if you need to. 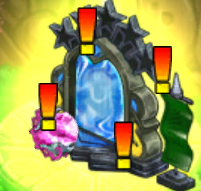 Epic Rounds are levels that are extra challenging and long. They usually feature more and tougher enemies than the average level. Expect to see lots of bosses.


Epic Rounds can be identified by the exclamation marks floating around the level gate. Although sometimes, they’re hidden in normal looking levels.

Hope you enjoy the post for One Finger Death Punch 2 Types of Levels – Basic Gameplay, If you think we should update the post or something is wrong please let us know via comment and we will fix it how fast as possible! Thank you and have a great day!