This guide is meant to help the player conquer as many castles/cities as possible with the minimal amount of recruiting.

This guide is meant to help the player conquer as many castles/cities as possible with the minimal amount of recruiting. It works against all factions and probably on mods too.
The strategy is simple: telling a lord to siege a fortress/castle, letting him start the fight and then help him win, and finally sending him to one of your cities to get his prisoners.
Prerequisites:

Step 1: May I suggest a course of action?

Approach a lord of your faction — preferably one with a big a*s army laying around, and that doesn’t hate you — and tell him about a “fortress that can be easily taken”. Regardless of how difficult it is to take the fortress, the lord will gallop there and lay a siege. It’s important that you follow him and help him fight against any armies that appear — otherwise you will get a relation penalty for sending him to his doom. 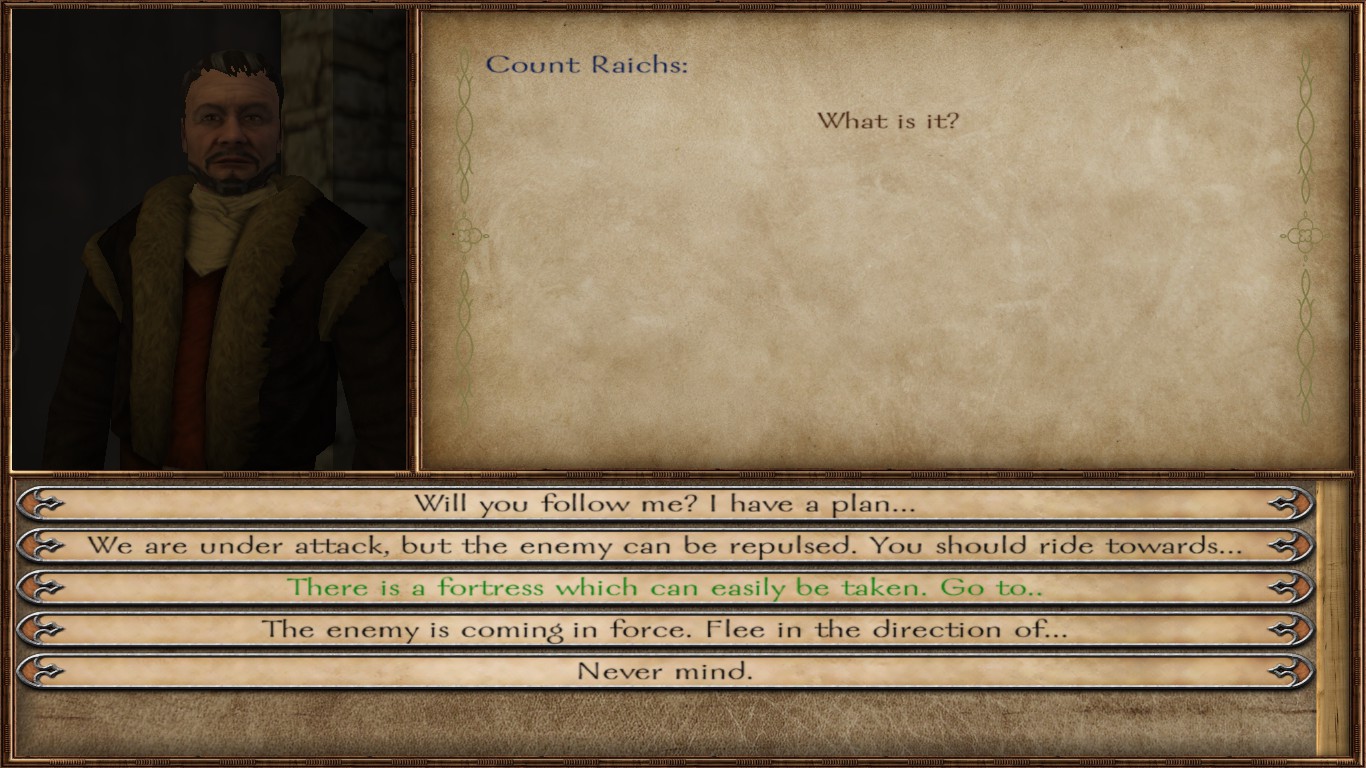 Step 2: Building a siege tower faster than Artimenner can ever dream of

When the lord starts sieging the fortress, it ALWAYS takes around 8 hours for him to get his preparations ready — regardless of your engineering skill and the necessity of building siege towers. This is extremely beneficial, as you will not need to worry about wasting 60+ hours around Dhirim all by yourself while swadians gather the army to face you.
While sieging in the campaign map, go to the lord again and suggest to him that he should attack the walls — wait around for a bit, if he needs a bit more time.

After you told the lord to attack the walls, join in the battle. Then just crash inside the castle and kill everyone. Unless there’s a lord inside the fortress when you arrive, your side will have the numerical advantage — and the quality advantage, if you have good old swadian knights at your side.

After the battle is won, your allied lord that started the battle will get ALLthe prisoners, rescued soldiers and loot for himself (spoiler: that’s a good thing). Also, he will fill the garrison with his soldiers, meaning you won’t need to worry about reducing your party size. Usually, the combined size of both your and the lord’s armies will increase due to rescuing, and you can easily chain these sieges until the enemy kingdom is no more and your puppet gets an army bigger than a king’s.

Since you didn’t start the siege, you can’t ask the castle for yourself (unless you’re independent or convince the butter king). Also, you didn’t get the loot in weapons and armor or prisoners — it all went for your siege puppet. But you can profit way more this way.

Your friendly lord must have at least 100 prisoners after “liberating” some fortresses (more than your prisoner management skill can ever dream of), and you can easily get these all for yourself. After the battles, suggest to him a course of action: tell him the enemy is coming in force. Ask him to flee to a fortress you own — that’s the most important part. Once he arrives in that fortress, he will drop ALLof his prisoners in the garrison, thus giving you a huge pool to ransom or emergency recruit from. It’s preferable that you send him to a city of your own, as to make travelling for a ransom broker less painful.

Here are two screenshots of Dhirim, after 4 castles where besieged by a puppet:

Around 1/4 of these dudes are expensive af swadians knights:

Here we come to an end for Mount & Blade: Warband Making sieges faster, easier and more lucrative in Warband hope you enjoy it. If you think we forget something to include or we should make an update to the post let us know via comment, and we will fix it asap! Thanks and have a great day!