You will, unfortunately, need to depend on people. Distribute your wealth. Each gets one gold, no exceptions. Once they have their gold, act quick to make sure they don’t stay unemployed! Get them a job:

The foundation of our society, this job will require them to do very hard and skilled labor. They will need to put their life at risk working on your projects late into the night, like walls to keep foreigners from telling your people what the real world is like enemies from stealing your wealth. If they disappear randomly one night due to the nightly invasions, tell the rest of your people they were secretly a capitalist. That ought to scare them into obedience!

Another important job, they hunt rabbits during the day and fight off hoards from the safety of the walls. Make sure to collect their excess wealth often, or they may discover what its like to have money! And they will certainly enjoy it, after all you like having money, right?

As the main providers in your society, they must work hard all day to make food (and wealth) for the empire! Do not give them the luxury of a house to stay in at night, it would be a waste of your good citizen’s coin! Put those coins towards extending your influence and fighting dirty capitalists.


Wages should be one coin

More of your defense force, they will have to fight on the front lines to defend your empire! They are the most important units in your force, as they allow you to extend your influence over the stupid vagrants by taking out the capitalist bases and encompassing the vagrant’s villages.


You may have noticed that all units have the same wages. If you don’t understand why, you are a capitalist. Go back to your portal, and hands off my our money!

A important thing to know is who is against you. There are many forces that will attempt to overthrow and/or undermine your growing communist empire. Many of these forces are capitalists. You must destroy them immediately. They think their system is somehow “better” or “friendly”. Ignore them. They have been plagued by their leaders to think that their way is better.

These guys will relentlessly attempt to steal all of your riches… By riches I mean the equally redistributed wealth you have accumulated, comrade! They only want to see you fail and convert you over to their way of thinking. Riches have plagued their greedy minds. Do not trust them. 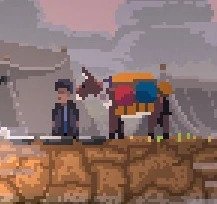 This despicable fellow hoards his riches from the state. He has a limitless amount of money and will destroy your incredibly well balanced economy! Seek out his camp and crush it, one cannot have wealth in their communist society!

Another despicable breed. They take their share of wealth and do nothing! Force upon them a tool and get them to work! If they refuse, throw them at the mercy of the capitalists and see how they like it.

Great leaders will always be able to keep the people on their side, because they are legally obligated to work for you.

You may find in your travels a hermit who knows how to make bread. You will have to pay a great sum of money to gain their favor, but once you do, they are yours! Always remember: You can buy anyone with enough money. Just don’t let anyone else know that you paid them more than your other workers.


With your newfound information, you can create a bakery! Bread is for show only, citizens are not allowed to eat it. If you catch anyone eating said bread, give then the harshest job possible, or even throw them out. They clearly don’t understand that having food makes you look good as a leader. Remember: Food = Success.

These lands you have found are destined to to be run by you, and you are the hero that will bring justice, money, and bread (not for eating) to all the impoverished people of the land! Protect them by putting walls around your land. Always continue to expand your territory, even beyond your own lands. Despite what other countries may say, the world is your (communist) oyster!

Wealth in the hands of the people is bad. They don’t know how to spend it properly and will probably end up buying Air Jordans or something stupid like that. Keep them somewhat poor; this will make them grateful for their allotted share. Providing food is optional.


Appoint a trusted individual to guard the rest of your precious wealth! You can gain their trust by sharing some of that wealth, just enough to buy some nicer clothes and a fancy hat! The rest goes into your fancy castle.


Speaking of castles, you have one, right comrade? Always show your superiority by having a nicer place than your people. This will keep them striving to work better. Of course, they will never live as nice as you do. But they will work harder in hopes that they will!

As a young communist empire, you will quickly need to adapt to your situation. The capitalist forces will relentlessly attack every night. You will need to use every means possible to hold your ground. The best way to do this is, of course, murder. If you aren’t up to this, however, there are other means of getting them to go away.

They will bang on your walls. They will call you names. They will try to steal your wealth. Ignore them. Build up the toughest walls you can and block them out. Your people don’t need to hear their message, they have you, their great leader, after all!

Capitalists are stupid. They want money above all else, so why not give it to them? Show them your ways by including them in your distribution of wealth, giving them one coin each. They will stare at it, entranced by its shiny beauty, and run off with glee. What morons.

Build a bomb. Blow up their homeland. Its not murder if you don’t see it happen, right?

Get over it. They’re capitalists, it isn’t murder because they clearly aren’t an intelligent species.

If you follow this guide, you will surely find yourself in a hard working communist paradise! A couple extra tips before I depart:


All images obtained from the Kingdom Wiki.

Here we come to an end for Kingdom Two Crowns Tips How to Create a Communist Empire hope you enjoy it. If you think we forget something to include or we should make an update to the post let us know via comment, and we will fix it asap! Thanks and have a great day!