The first Hunt: Showdown Discord Bot! I think so? Click the rat to invite him to your server: †🐀 [discord.com]
Make sure to grant him all of the permissions that’ll show up or else some functions might not work!
I hope you’ll enjoy the bot as much as I’ve enjoyed programming him!

A lot of people are currently adding the bot to their servers and at 100 servers nobody else would be able to add it because I would have to verify it on Discord first. Probably I wouldn’t be able to do that until late August. The verification process might take a month or even much longer. Until then the bot is limited to the first 100 servers! Grab it while you can!

The RevenAnT comes with 250+ commands to make your life easier and satisfy your curiosity!
You can see a full list of them simply by just typing “>help” on your Discord Server!

Tip: Use CTRL + F keyboard shortcut and write the name of the weapon to navigate quickly!

This section of the tutorial is for people that want to learn how to use shorter versions of commands to potentially save some time in the future. If you’re only interested in normal commands, go ahead and skip to the other part!

Choose a weapon to see its statistics as well as custom ammunition stats for each variant!
There are many ways to use the commands.
For example >hunt_winfieldc_silencer can be written as:

Where “s” equals the first letter of the weapon variant!
These aliases apply to all of the available commands! 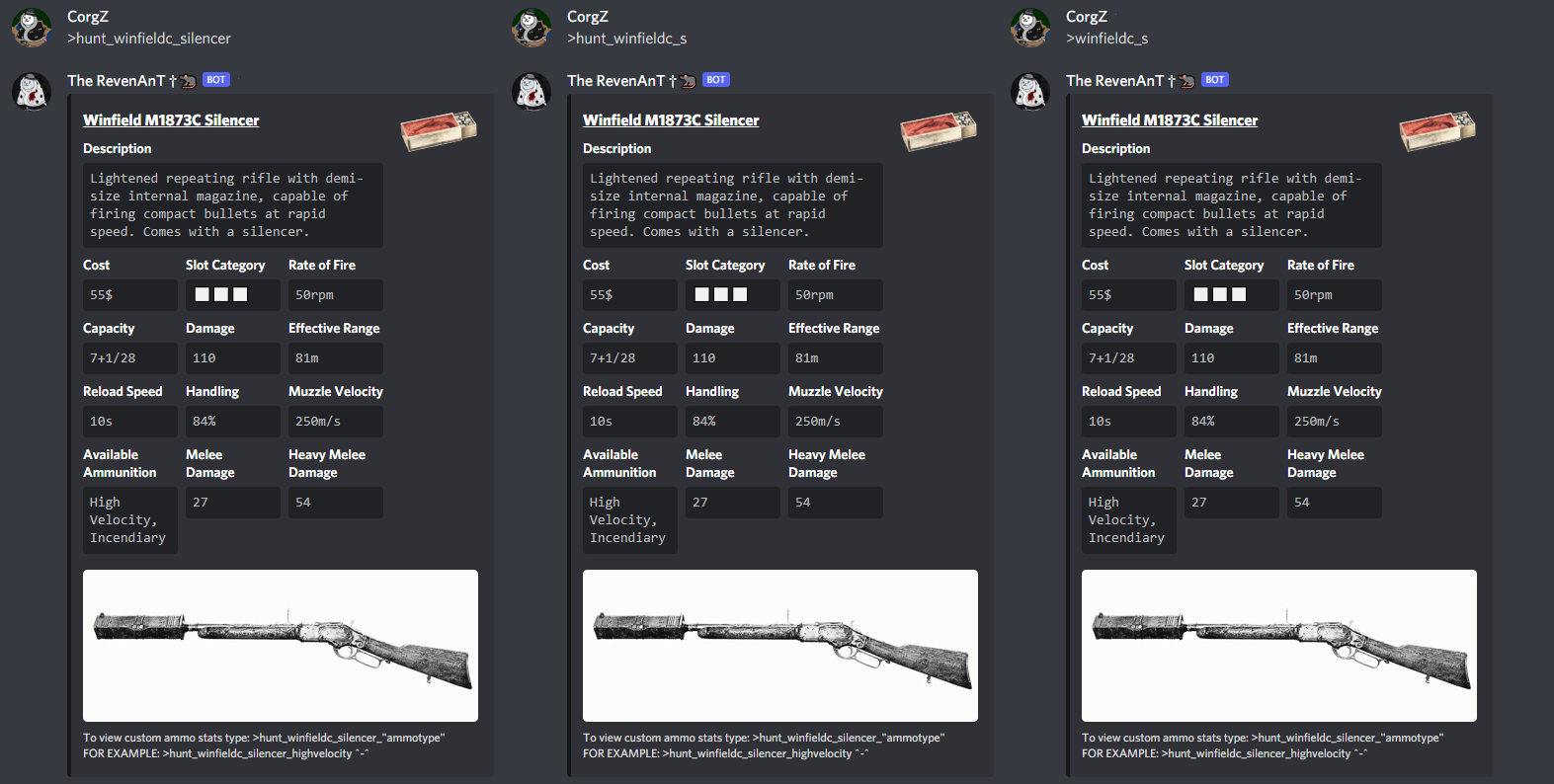 To see custom ammunition stats for any variant you simply write the command as normal and add the ammo type at the end. Let’s take >hunt_winfieldc_silencer_highvelocity as an example. This command could also be written as:

Where “hv” equals the short name for High Velocity. 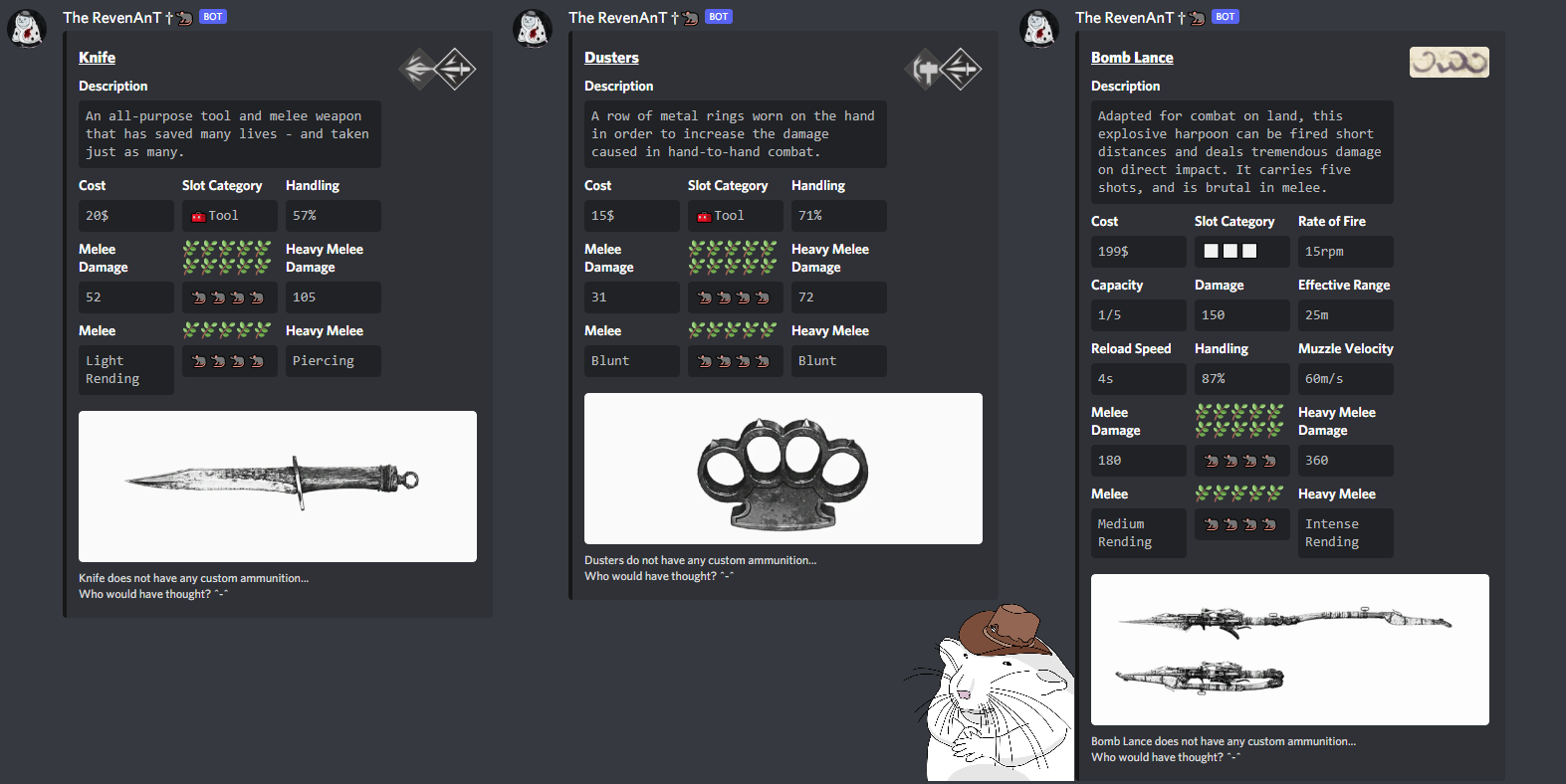 Ever wondered why people keep shooting you literally seconds after you spawned in? That’s because they know where to check for other hunter spawns and now you can too!
And with a very simple command: >”mapname“.
For example: “>stillwater”, “>lawson”, “>desalle”. 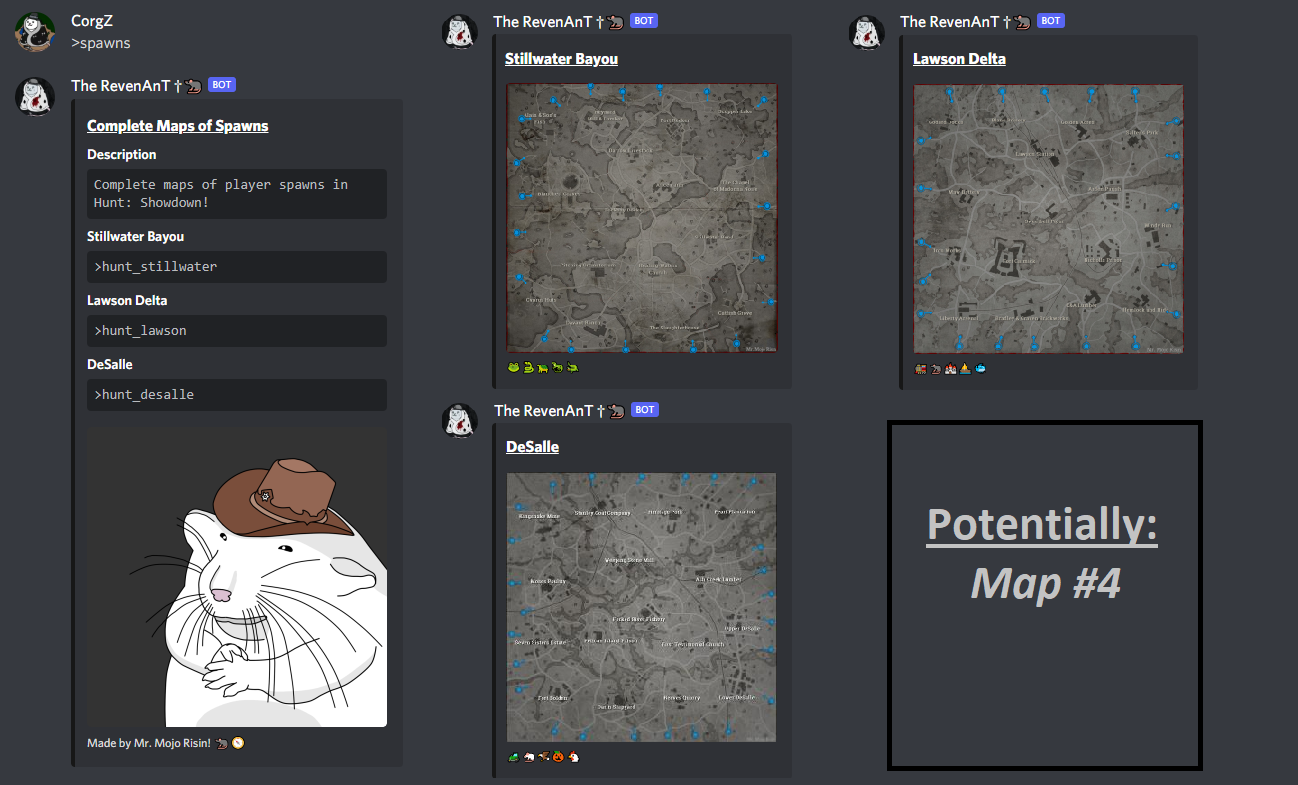 You get access to all of the spawns confirmed forALL OF THE AVAILABLE MAPS right on your Discord Server! Amazing, right? All of the map pictures were made and edited by Mr. Mojo Risin in his guide! Feel free to check him out!

A bunch of useless stuff! LULW🗑️

Useless but needed for me to stop questioning my existence.

If you find any bugs, make sure to report them down in the comments section and I’ll try my best to find the problem and fix it!

People that made it possible!

Hope you enjoy the post for Hunt: Showdown The RevenAnT [Discord Bot], If you think we should update the post or something is wrong please let us know via comment and we will fix it how fast as possible! Thank you and have a great day!