Fun facts to know before getting in too deep.

There are conveyors. There are Automation’s.


Soon enough you will find yourself in a whole mess of things and will want to start over. in hindsight I probably should have too.


This is a fun game, challenging in a way that leaves you facepalming yourself more and more. Unlike most other industry sims, this one starts out with “drones” and ends up with conveyor belts. However, soon enough you cant create enough drones to meet your logistics demands. Then, well, the headache starts.


2. Technology. Its beautiful, until it isn’t.


Unlike other sims, the more advanced your technology becomes, the less advanced the technology is. Keep that in mind, as for instance, recycling technology that can provide you with much needed resources from your settlements will only become available at a time you realize too late that you have created a flow of resources that cant support the integration of recycling… You will see what I mean soon enough in your own game, or like me, have come to that point wondering why no-one said anything up to this point. If, like me, you have reached this point and find yourself at this guide’s contents, I propose to you to just start a new settlement with your hard earned knowledge on your fingertips. Destroying and trying rebuild a network at this stage proved to be much more of a pain than just starting new.


Point is, the needed technology for what you are trying to solve probably will only come much later than you think and at that point things are far too intricate to be able to fiddle with your networks.. probably.


First rule of mining and dumping, dont build anything important near your mining locations. Contrary to popular belief, having important infrastructure buildings close to your mines places them in extreme danger. Things fall down. Digging holes is not as simple as it seems. Keep that in mind. Finally, dumping, oh how much fun it is to have a bunch of ramps around without having anything to jump off of them. Instead, be a smart person, dump it all into the ocean. That’s right, be as environmentally unfriendly as you possibly can be in this sim. Reason being is that there’s most probably a ton of water around your island which leads to space constraints. Once those constraints have been reached and you havent been dumping into the ocean, well, its a little late to start doing it. Dumping your resources, yes resources, into the ocean servers a purpose for your settlement, it allows you to expand. Dumping allows you to build ramps to higher tiers of the land around you and/or creating artificial land for the rest of your settlement.


be careful when your mine gets too deep, you can end up with a problem where all your excavators and trucks constantly get stuck trying to mine a resource like below: 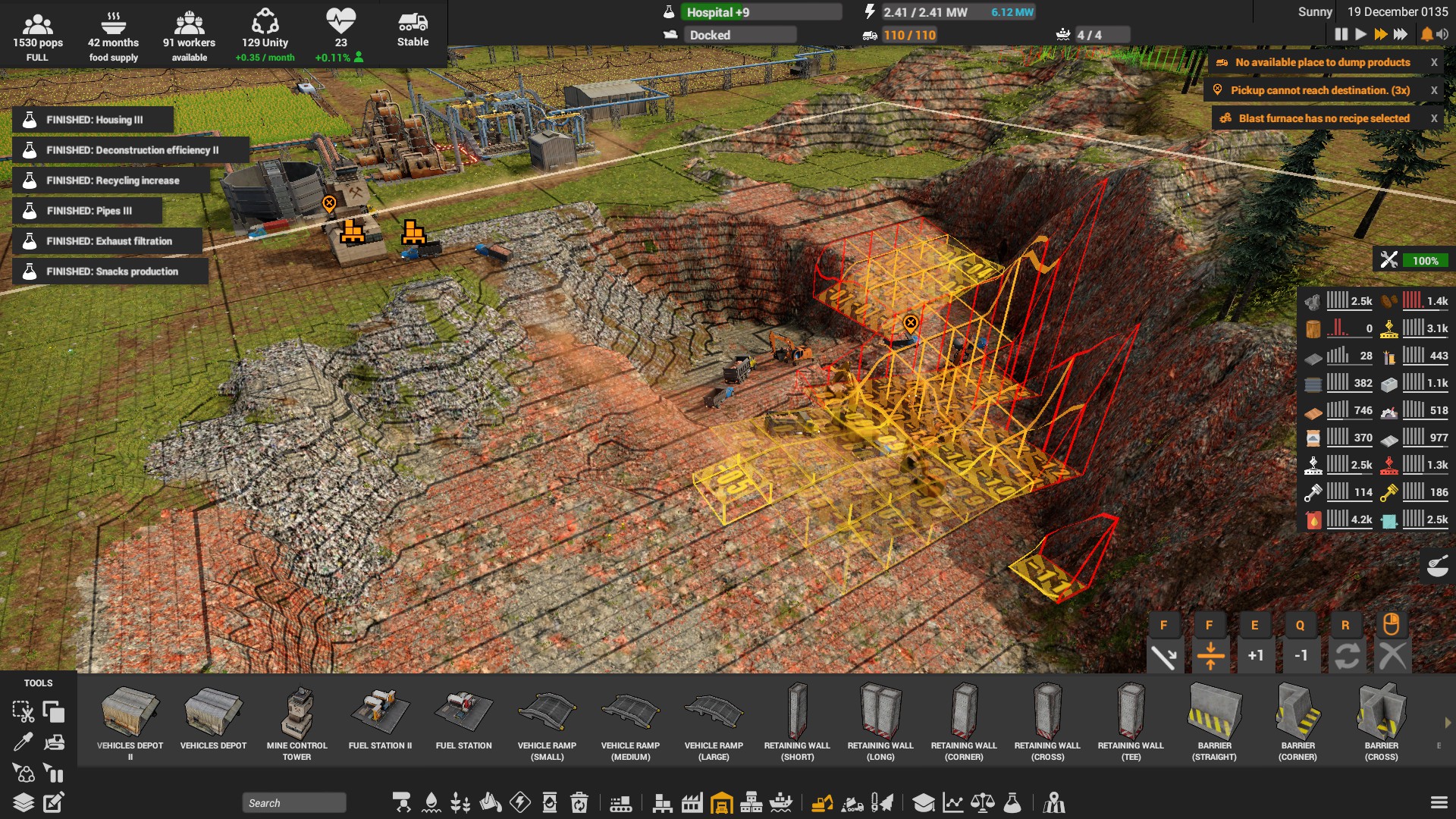 Instead of making the designated area slope downward, mine in layers – as below, hit F to change the slope style of the painter. 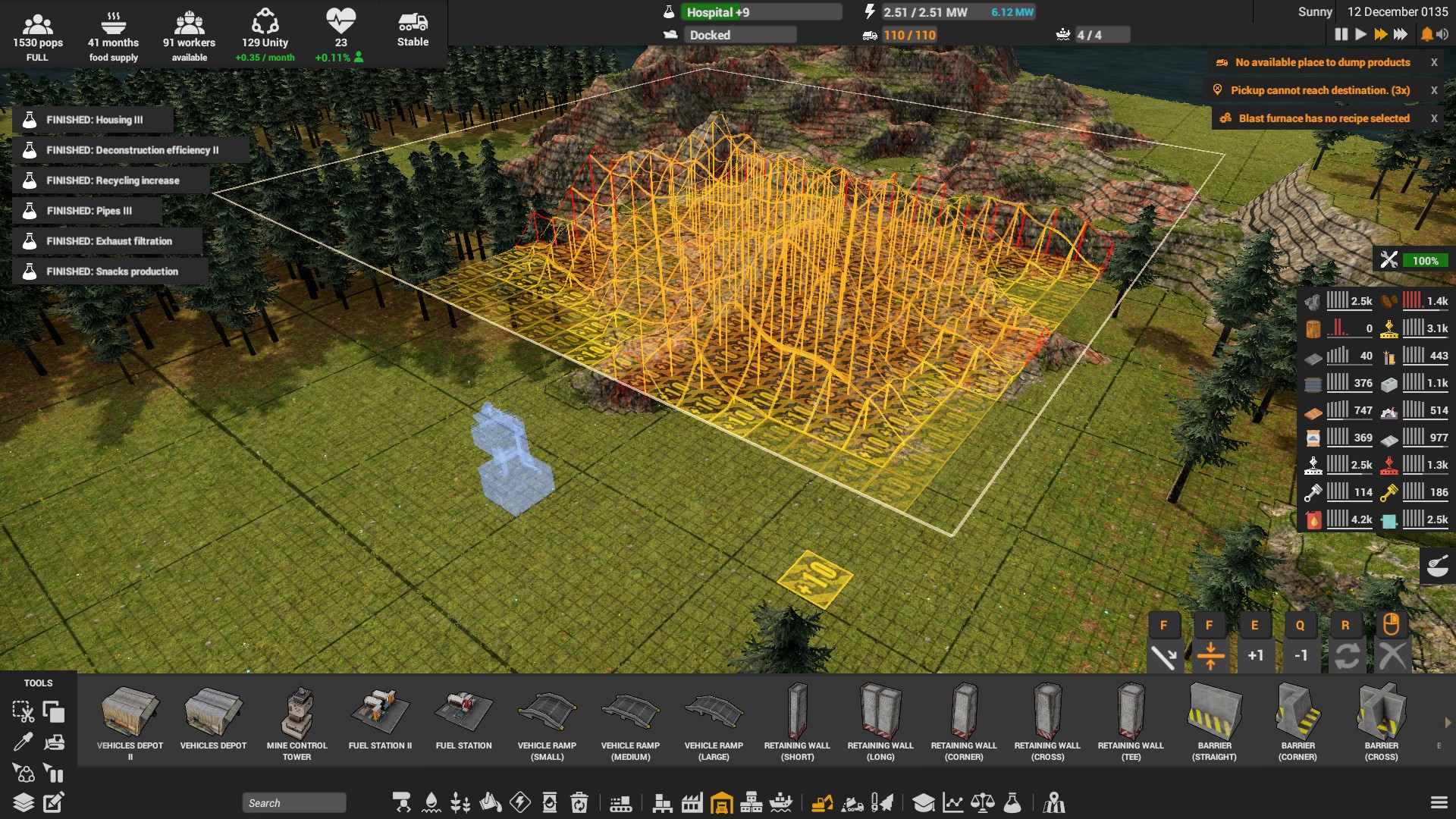 When going down its easy to get stuck, so remove it layer by layer


As mentioned in the comments by @Buckeye – stay aware of your spatial pathways and open lots between buildings. Having to restart because of space constraints sounds silly, feels silly, but is a solid factor in creating migraines for many players. Im currently running my 3rd settlement and again I have forgotten to leave space available for t3/t4 production chains that require my t1 structures to double up on production. 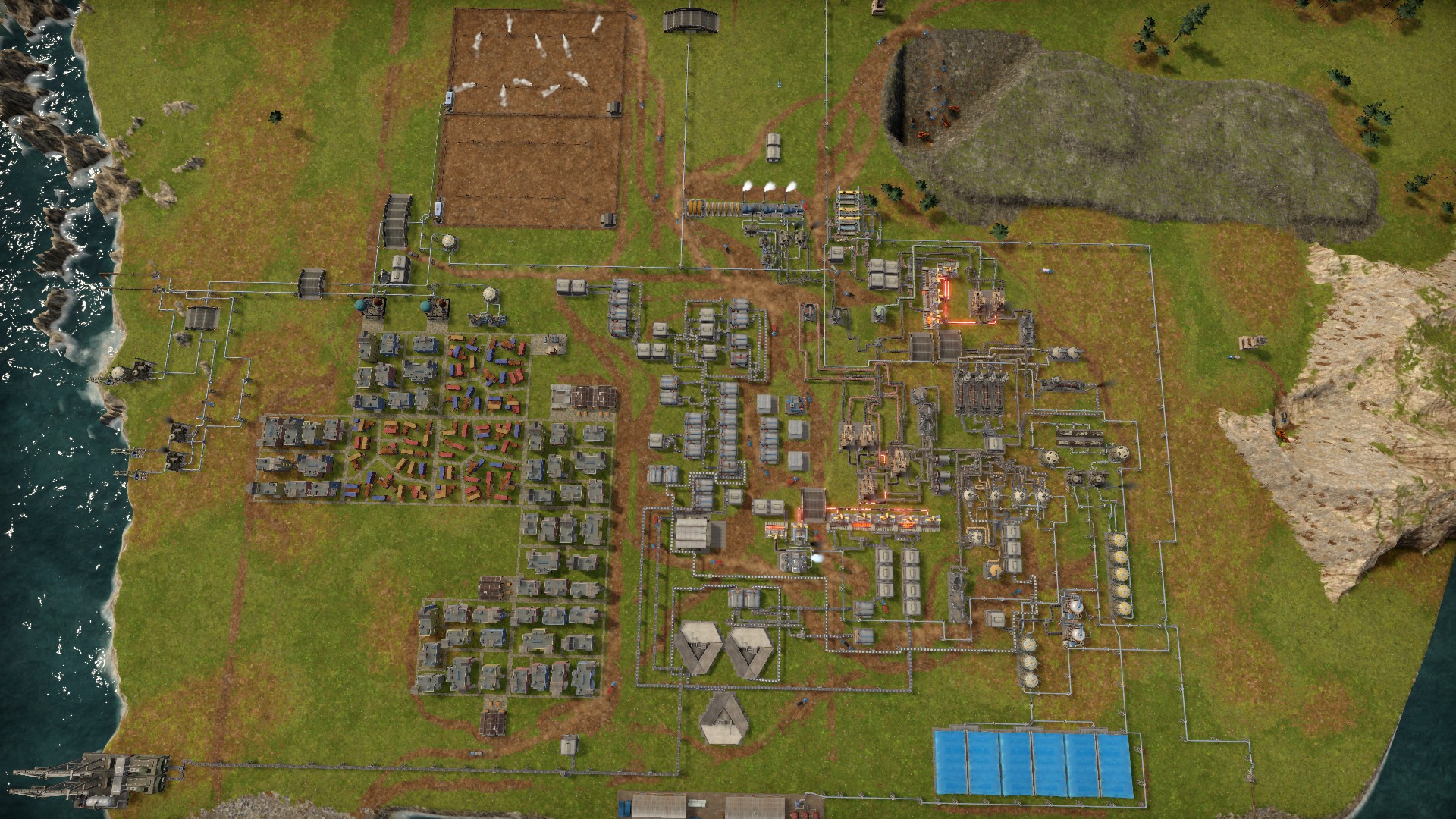 This screenshot is from my 2nd settlement, and a prime example of how quickly you find yourself in the conveyor spaghetti contests and losing too much space to, well, conveyors. The trucks are really, really iffy in regards to their capabilities of going underneath conveyors.


As I am sure most of you are aware, just because your resource counter states you have none of a resource type even though you are producing it, doesnt necessarily mean that you dont have any of that resource available. The resource counts of your resource screen and pinned resources are only populated from resources in storage buildings.


Heres another update on my fustercluck; 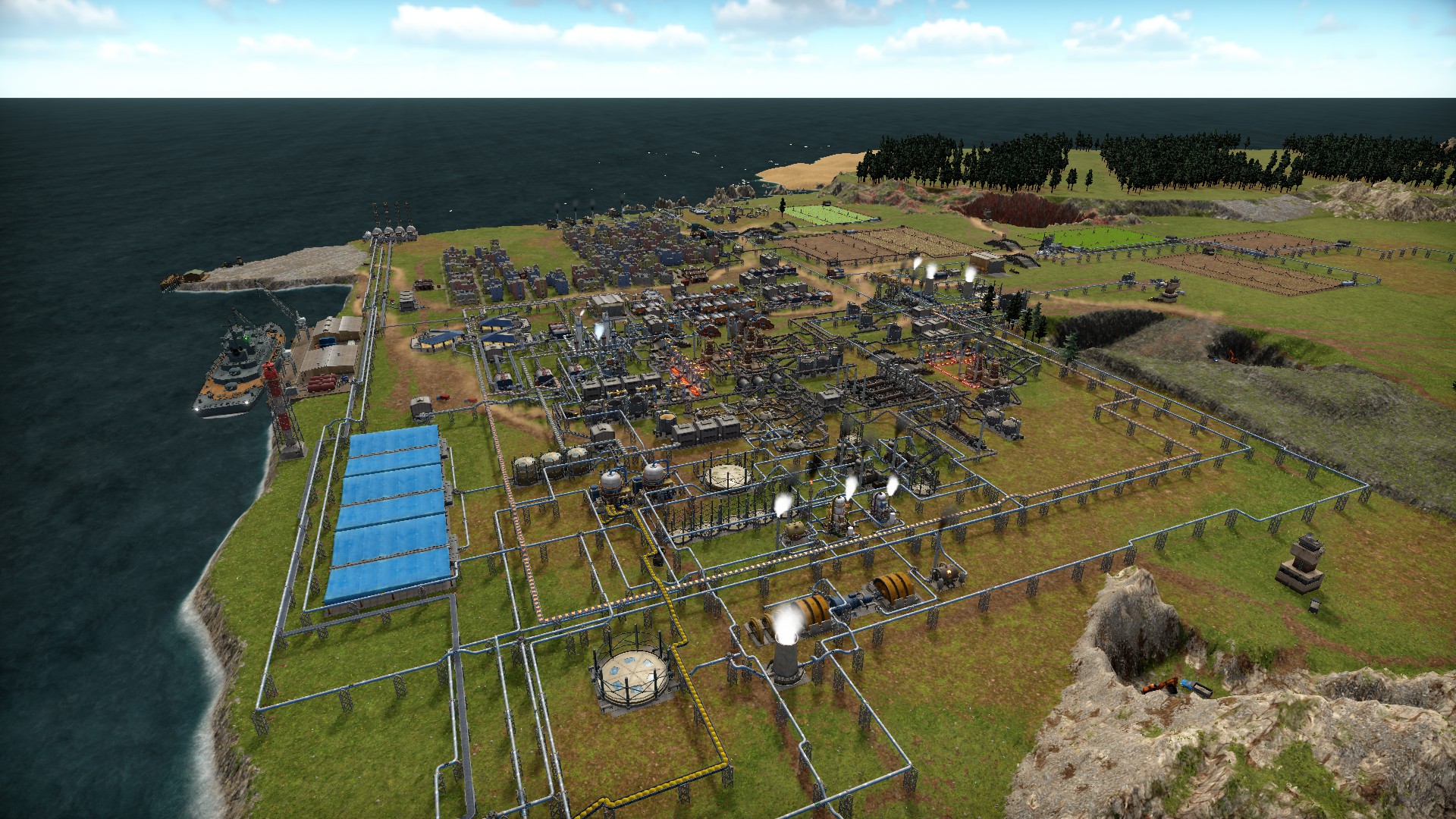 The conveyor spaghetti really turns into a nightmare.. and then the pipes! This time I thought I had spaced enough, but turns out, I didnt… 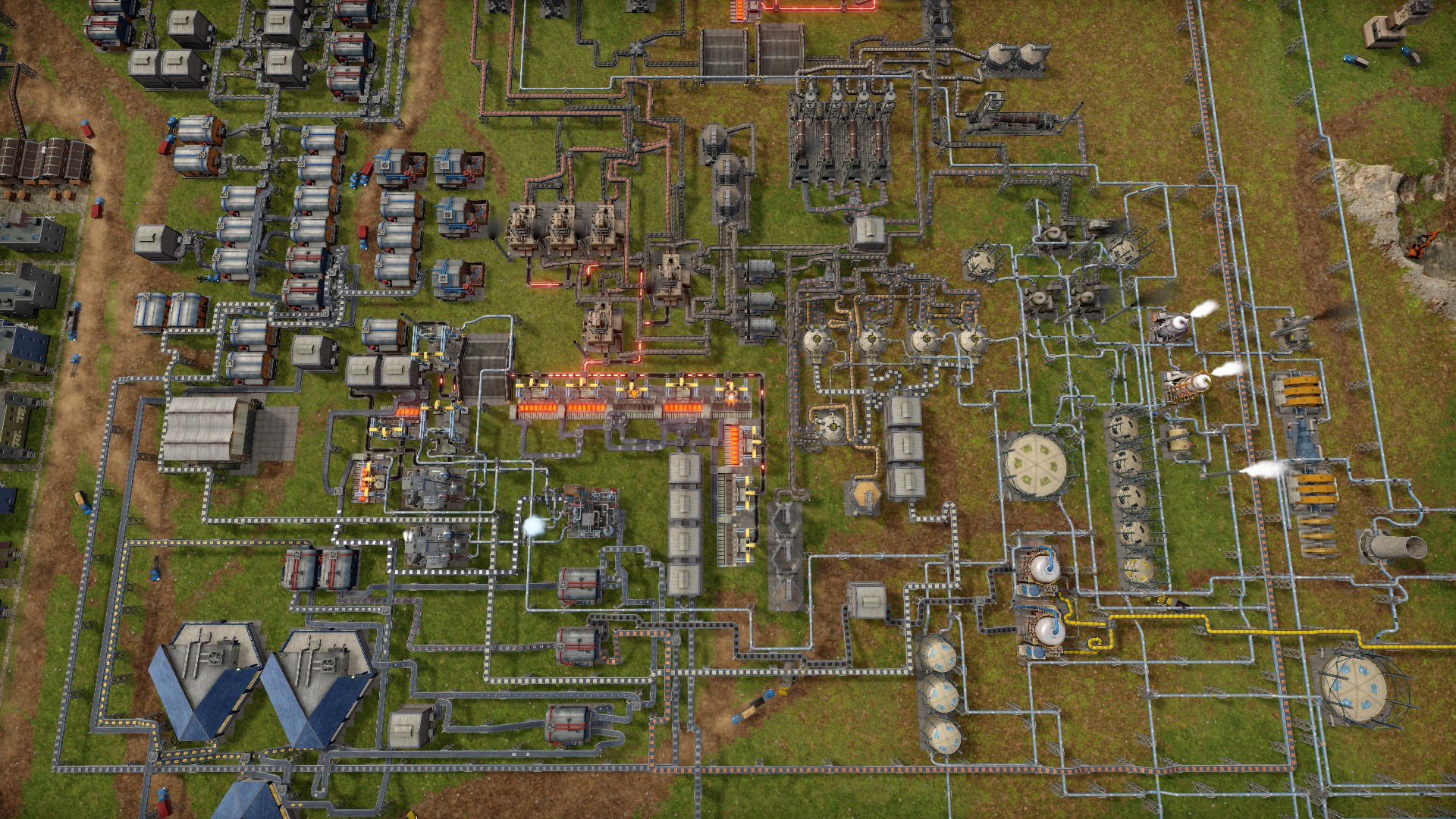 The sheer scale of production values on this sim is quite immense, considering the fact that you have to account for any and all travel routes of your vehicles. Vehicles cant get underneath ramped pipes or conveyors which in turn makes it difficult to expand or add into a production line without having to redesign the whole map.


4. Resources are finite – plan for the eventuality that you WILL run out of a certain resource

Oil – seems abundant on your map right? Wrong, once you start expanding into fuel heavy production, immediately start planning for alternate fuel production methods otherwise you will have to rely on your cargo ships for import or trading.


Water reservoirs – Luckily the underground reserves refill when it rains, but you can over populate the area with too many pumps which in effect, leaves you dry. Once populations reach over 1000, it becomes real hard to find space and supply water to the farms and settlements. Desalination is a very viable method of getting extra water.


Landfills – You WILL run out of space, DUMP all your waste into the ocean, or start building ramps onto the higher plateaus of your map.


5. Random Facts of the Day


Did you know your pipes can travel underground? Yes it is possible, found out from the patch notes, dump over them it is stated, to raise the ground rather than digging trenches and placing the pipe in the ground… like irl you know?


P.S; this guide is still WIP, if anyone has anything to contribute, feel free to do so. I will continually add to this guide as I learn the niches of this sim myself in time. If anyone is willing to contribute a lot, let me know and I will add you as a contributor to help all new captains out there.

Here we come to an end for Captain of Industry Fun Facts + Gameplay Basics hope you enjoy it. If you think we forget something to include or we should make an update to the post let us know via comment, and we will fix it asap! Thanks and have a great day!