63 days of glory by far has been a quite tricky RNG based achievement. In this guide I explain exactly how to tip the RNG in your favor as much as possible.

When you start the game you are introduced to the HQ. On the top floor in the middle there is an intractable map. From this map you can either go on a mission, send supplies to any districts that requested them (which districts require supplies is RNG based) and you can wait for a day.


There is 6 districts in Warsaw


There is 3 groups of districts with 2 districts in each group. Those with 90 points of Morale, those with 75 points and those with 60 points.


Every day these Districts will lose morale on the basis of how many attrition points they got.

Lets say Z has 90 points of morale and 2 points of attrition. If you go on a 3 day mission in another district Z will suffer 6 points of morale damage and you will find it at 84 points when you come back to HQ.


Attrition points accumulate when you ignore missions. Considering that you are given 3 missions every time that means that by default you will be ignoring 2 missions which equals to +1 points each for the other 2 districts every time you go out there.

Lets say W, P and M all have a mission each for you. If you pick W’s mission then P and M will suffer +1 attrition.


Every time you got the ability to supply a couple of random districts with material. Effectively you get the ability to exchange material for morale. This is extremely important.

How do we do this? 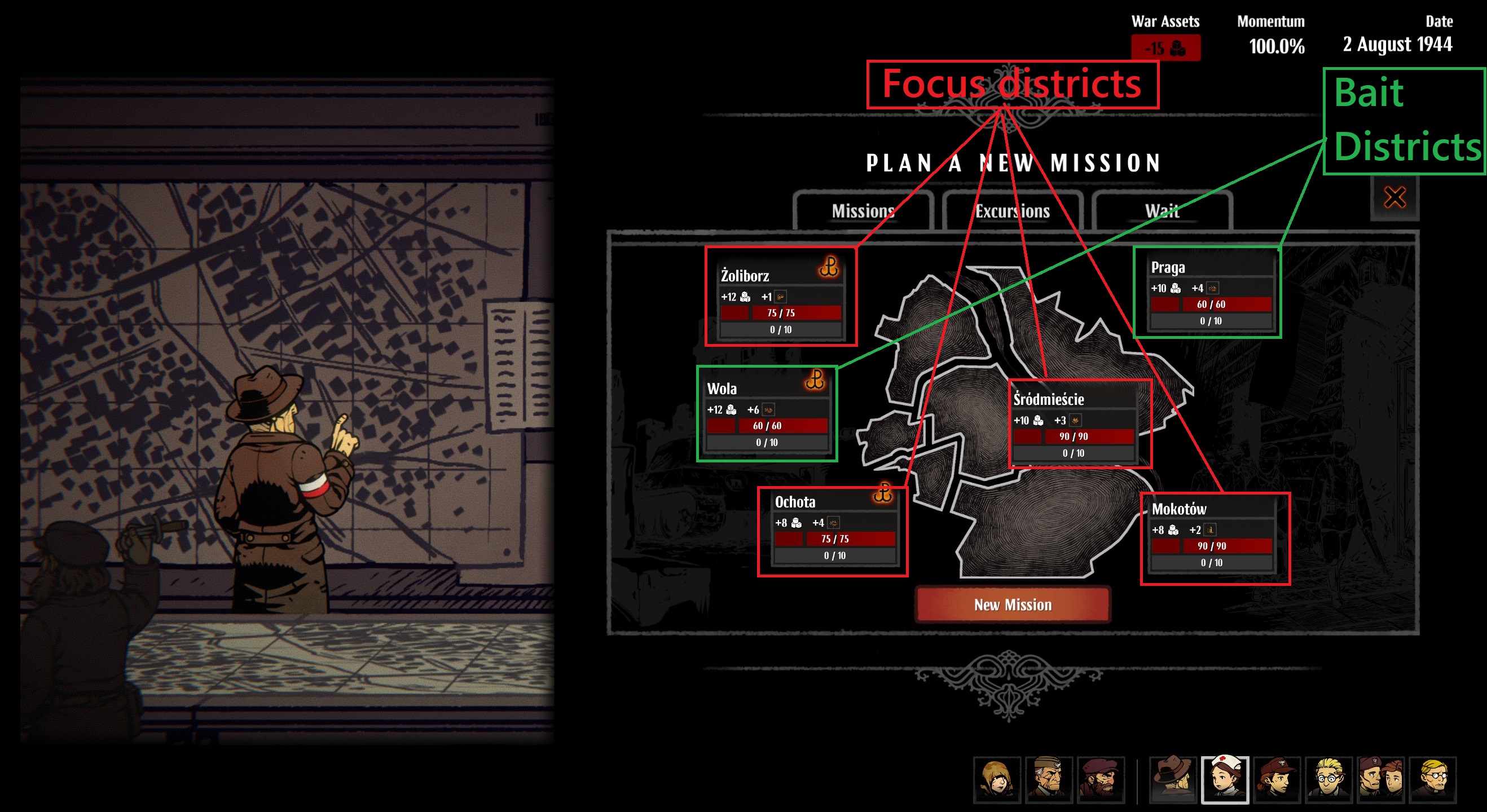 Note in this particular example Z, W and O have missions available. Going by this strategy I should choose a mission from either Z or O. W will take +1 attrition but it doesn’t matter because it is not a focus district. As a result we only ended up accumulating +1 attrition in the target group.


Tip: Ignore Rewards. Choose missions purely on the basis of which Focus districts need it more.


Note that this is where RNG can really mess things up. Ideally you want the bait districts to accumulate as much attrition as possible. That happens only if missions appear in those districts.


In the above example W (bait district) had a mission; Z and O (Focus districts) also had available missions. That is a normal scenario. Not too bad but not too great either. You would accumulate +1 attrition in your focus districts.


The worst case scenario (aka if the game REALLY wants to mess you up) would force all three missions to be on the focus districts, for example if it was Z, O and S. In that case you can’t help but take +2 general attrition in your focus districts.


You need to keep your districts healthy. Not just your focus districts but also the bait ones. The longer the bait districts remain alive the more points of attrition they can accumulate. Every time you see districts in the excursion tab needing resupplying or reinforcing you need to aid them. 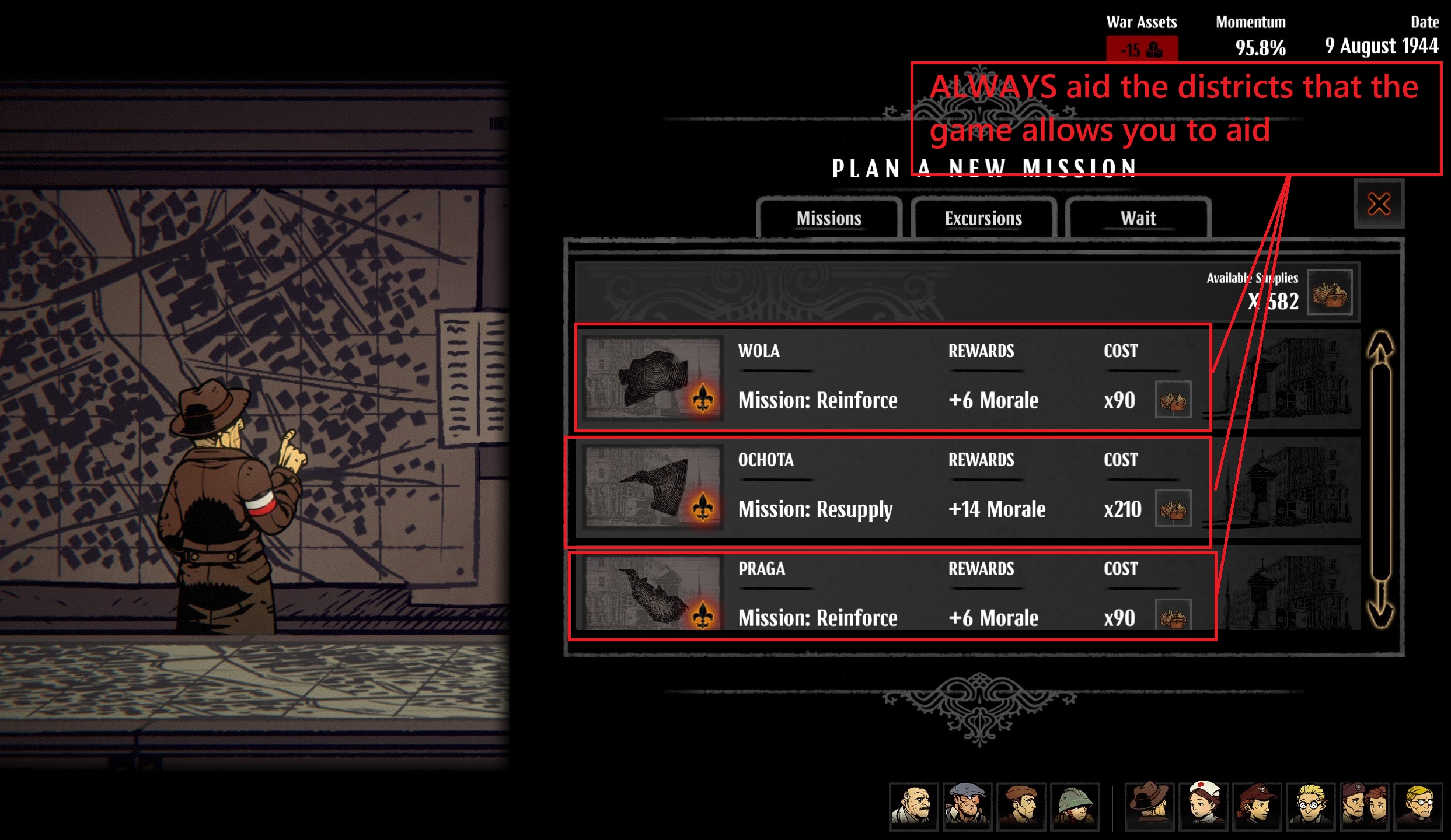 
Thankfully supplies are quite easy to come by. Repairing and Selling weapons or selling a type of ammo you do not need (for example you could play with a party that mainly uses long and heavy ammo and sell all your short ammo), selling items can also work. Doing this achievement on a low difficulty is advised. 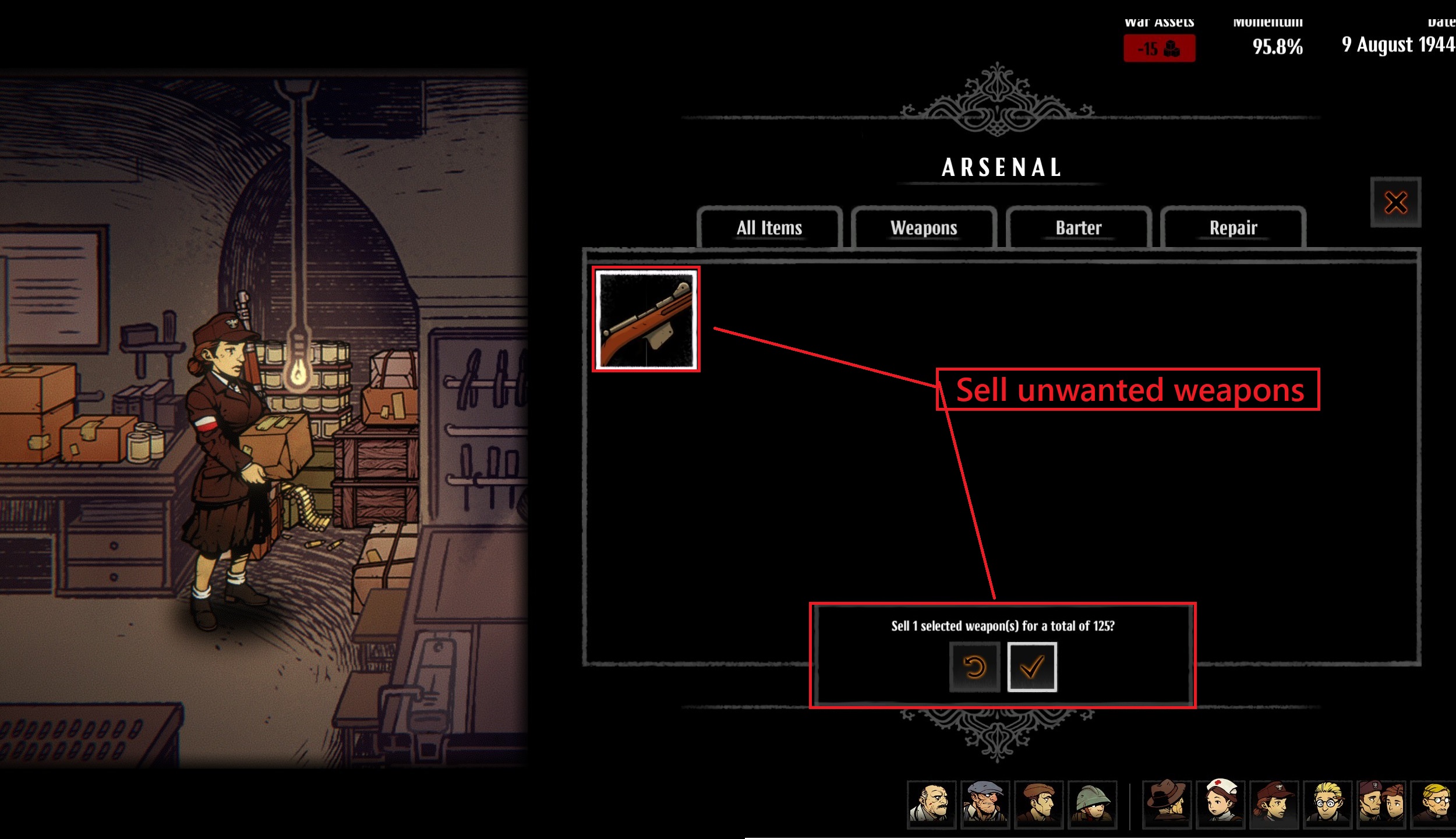 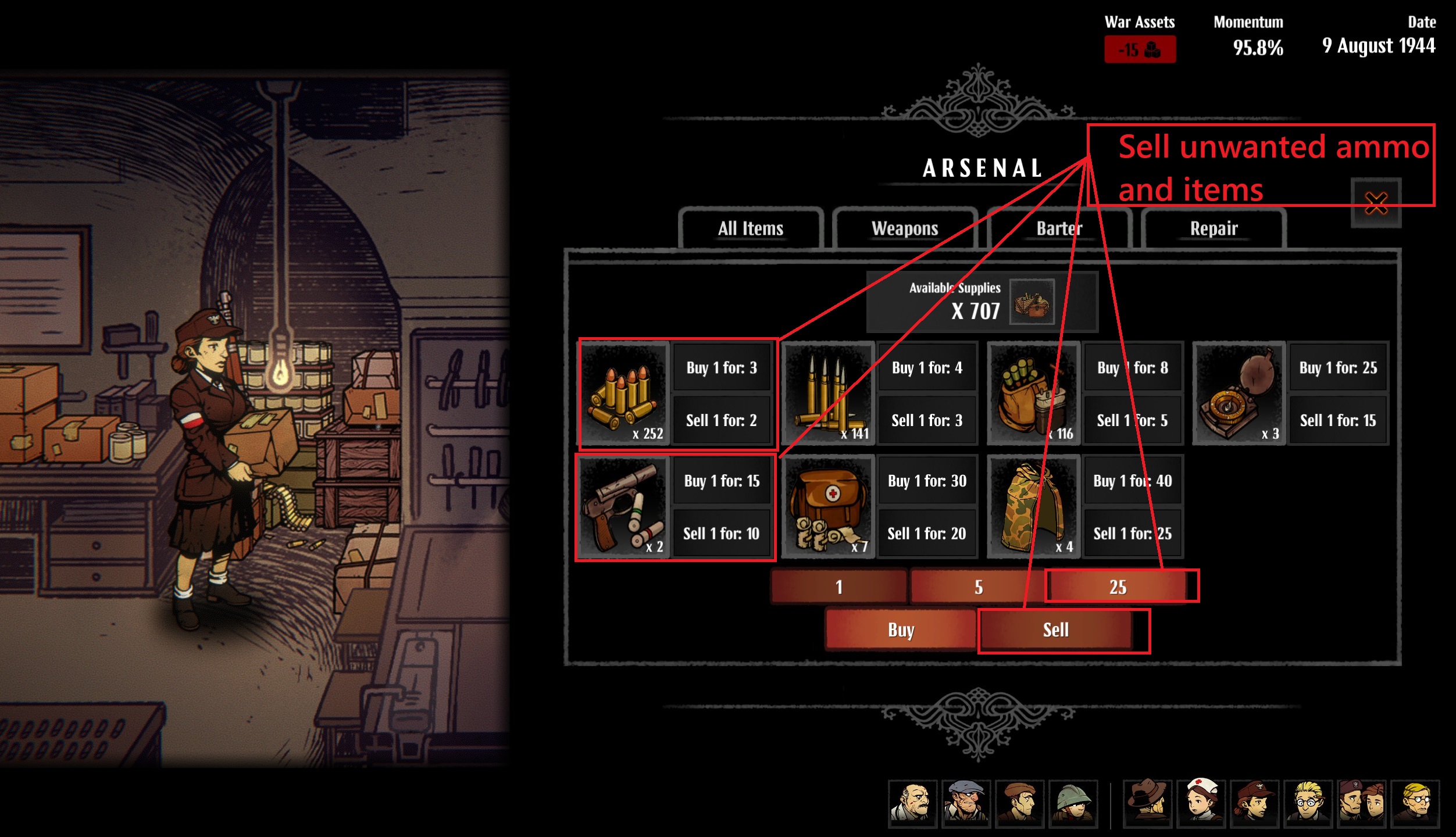 
Never wait, it’s a waste. It will give +1 attrition to all the 3 districts offering a mission and decrease morale depending on the attrition levels. If your team is wounded supply them with a good medic and medic bags (until you get access to a secondary group, at which point you can go back and fourth). 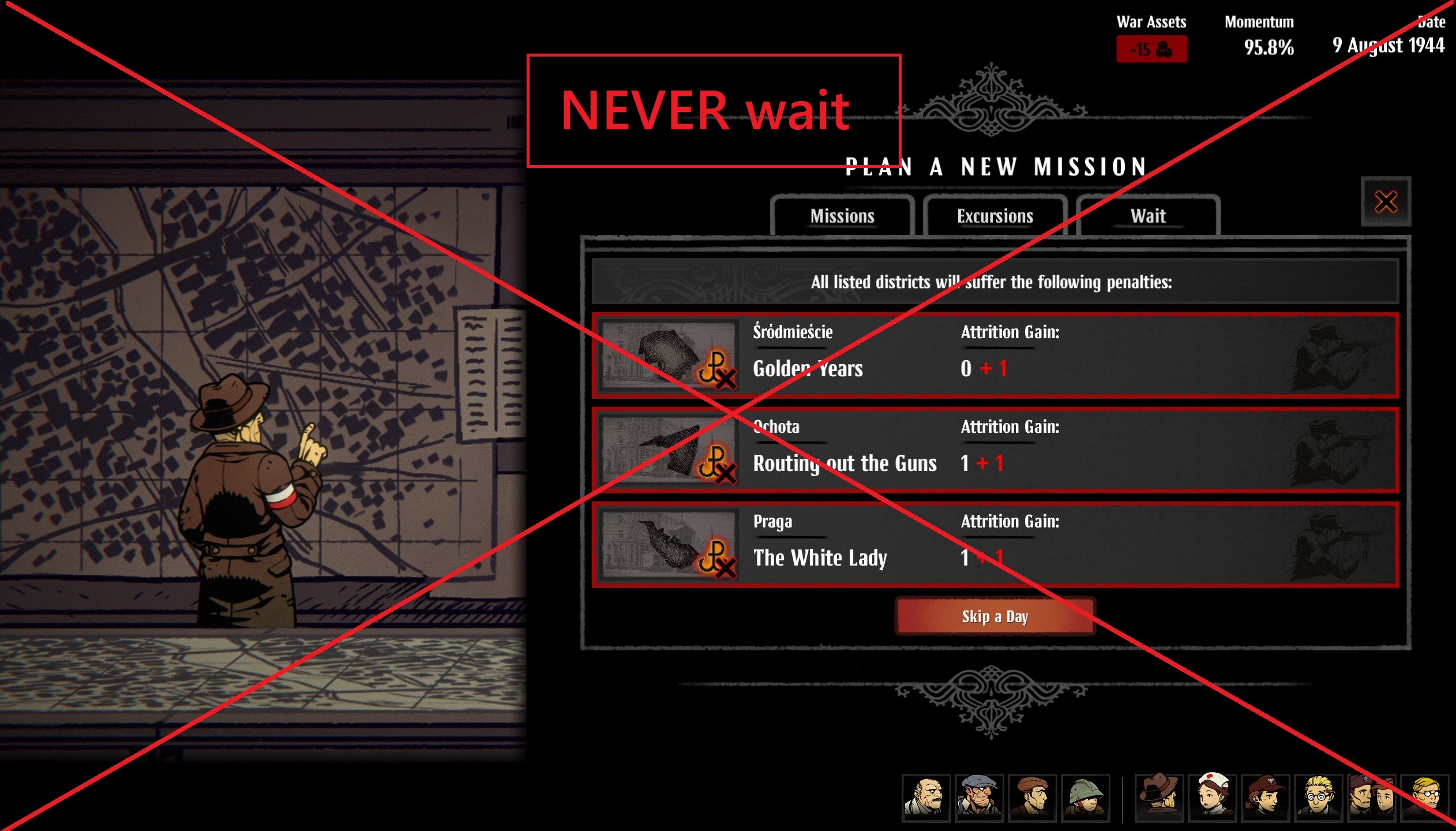 Now now. This achievement can be a ♥♥♥♥♥. Some times you will get events that will decrease morale or increase attrition. If you ever get any of these events immediately ALT+F4. The event will re-roll giving you something potentially better.


If you want to be particularly naughty you could ALT+F4 constantly until you get the best possible events for morale. 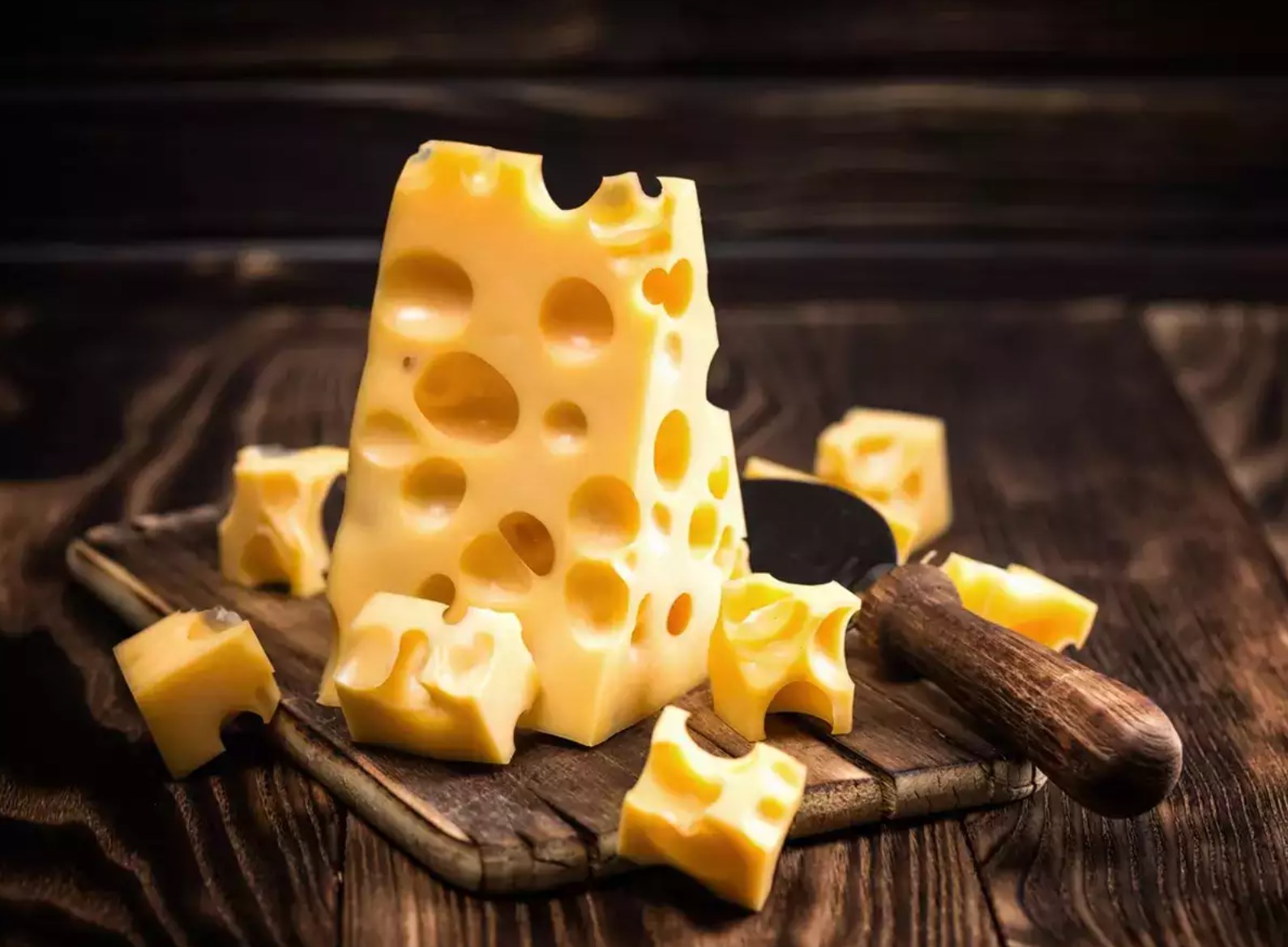 The biggest mistake I made while going for that achievement was trying to bruteforce my way through keeping all the districts happy. This is, to put it frankly, impossible. You need to focus on the most high morale districts, you need to re-supply all the districts as often as the game allows you and you gotta manipulate the RNG as much as possible with the events in order to not get screwed over. No one likes it when RNG ruins a 4 hour run. This does not 100% guarantee that you will get the achievement on your first run, however for what it’s worth, I tried fruitlessly for 5 times without this strategy and the moment I switched I instantly got it in my first try.


Thank you for reading this far, and good luck in your travels.

Hope you enjoy the post for WARSAW How to Unlock 63 Days of Glory Achievement, If you think we should update the post or something is wrong please let us know via comment and we will fix it how fast as possible! Thank you and have a great day!