Why the Basic Refinery sucks

I kept seeing people rely on the Basic Refinery as their first best choice to deal with stone that accumulates during mining short of just sorting and ejecting it out of sight, and not just in the humble beginnings of the starter base but as a permanent solution.

And because this is bad and wrong, I’ve wielded the magic power of spreadsheets to let the world know exactly why and where and how, once and for all.


But mostly, in case my propensity for overexuberantly excessive hyperboles has clouded that purpose, it is to have a reliable listing of actual tests and test results, something you can actually refer to instead of just vaguely knowing from hearsay or estimation. I realise and appreciate people have individual playstyles and preferences, can and will encounter individual challenges for which one solution is more attractive or convenient than another, or just don’t mind, so by all means build and play however you want.

There are three blocks in SE that refine stone to ingots. Each has its own immediately obvious pros and cons:

So, with the Basic Refinery apparently having no immediate cons, why the fuss?

There are three significantly different blocks that are capable of the same job. They have different sizes, costs, performance properties, and names that hint at their specialisation, or lack thereof.

Are they still equivalent in their performance at converting stone to ingots?

They are likely to be more efficient the more specialised they are.

Now this is where things get interesting. 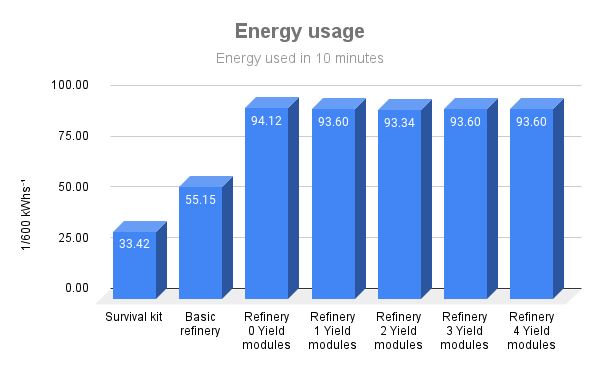 So, the Basic Refinery sits between the Survival Kit and the standard Refinery. But without seeing what it actually did with that energy in those ten minutes, that’s not really saying anything yet.


Also, there is some measurement noise in the consumption for the Refinery.


Bonus observation: Speaking of the Refinery, using Yield modules doesn’t actually increase energy consumption. Bug? Lazy Keen implementation? Intention? Who knows. At least those naysayers who use anything other than Yield modules on Refineries now have one excuse fewer. 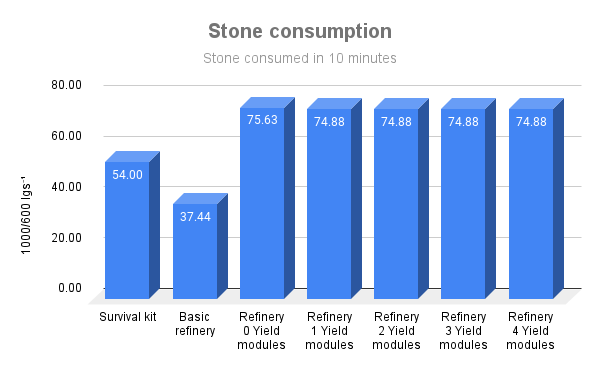 Well, well, well, will you look at that. It was pretty plausible from the start that the Basic Refinery would be slower than the dedicated big brother, but that it managed to be slower than the Survival Kit still, and by a ma*sive margin at that, is a surprise. One should think a block at least notionally more specialised in refining ought to deliver at least somewhat more attractive performance figures.

Note, efficiency is in Wh/kg, not kWh/kg, to keep the numbers short. 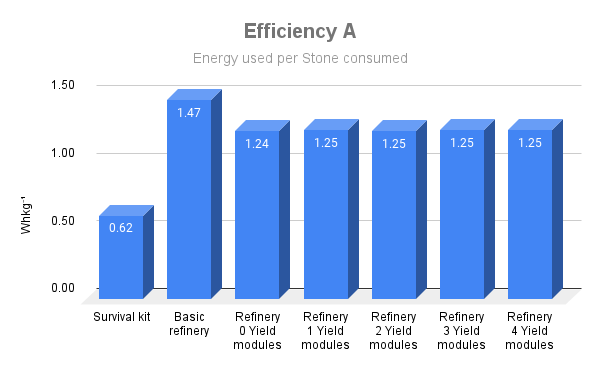 This is looking worse and worse. Not only is the BR slower than any of the alternatives, it also uses more energy for what it does manage to refine.


What a piece of rubbish. 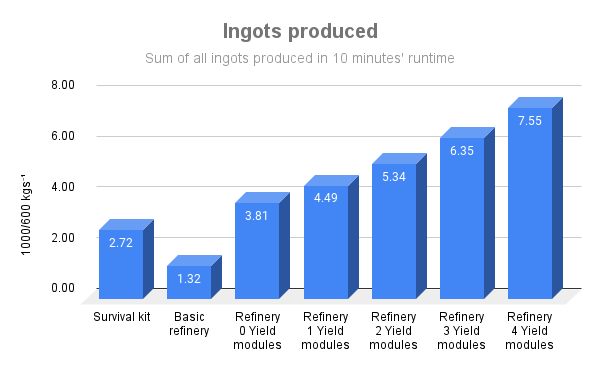 No surprise here. Less stone consumed, less ingots produced. But less by how much?


(Before you ask: All Gravel:Iron:Nickel:Silicon ratios are equal across all conversions. It’s always 35:75:6:10.) 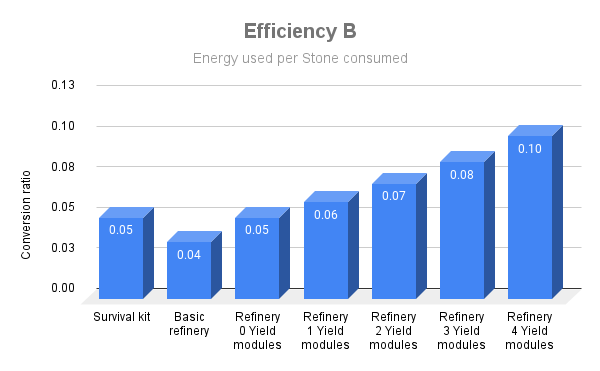 I have no words.


Also, interesting to see that the Survival Kit and the Refinery have the same conversion efficiency.

So, should you use the Basic Refinery for stone?

(Unless you want to. Who am I to tell you otherwise?)


The only excuses this sorry piece of pixel pile in the G-menu has for existing next to the proper Refinery are its advantages in size, initial cost, and raw power draw (330 kW vs 500 kW), but as soon as that Refinery can be afforded, this pathetic sack of junk should be erased from anyone’s consideration. Once superseded, it is literally and demonstrably a waste of time, energy, and material.

This is all for Space Engineers Basic Refinery Quick Facts + Energy Usage Info hope you enjoy the post. If you believe we forget or we should update the post please let us know via comment, we will try our best to fix how fast is possible! Have a great day!