This rather unusual word in the game means things that you consume: first aid kits, turrets, grenades, drones, and barricades. You can carry them around with you and use them at any moment by pressing numbers 1, 2, 3, 4, and 5 on your keyboard.


You can see what consumables you have at the bottom center of the screen: 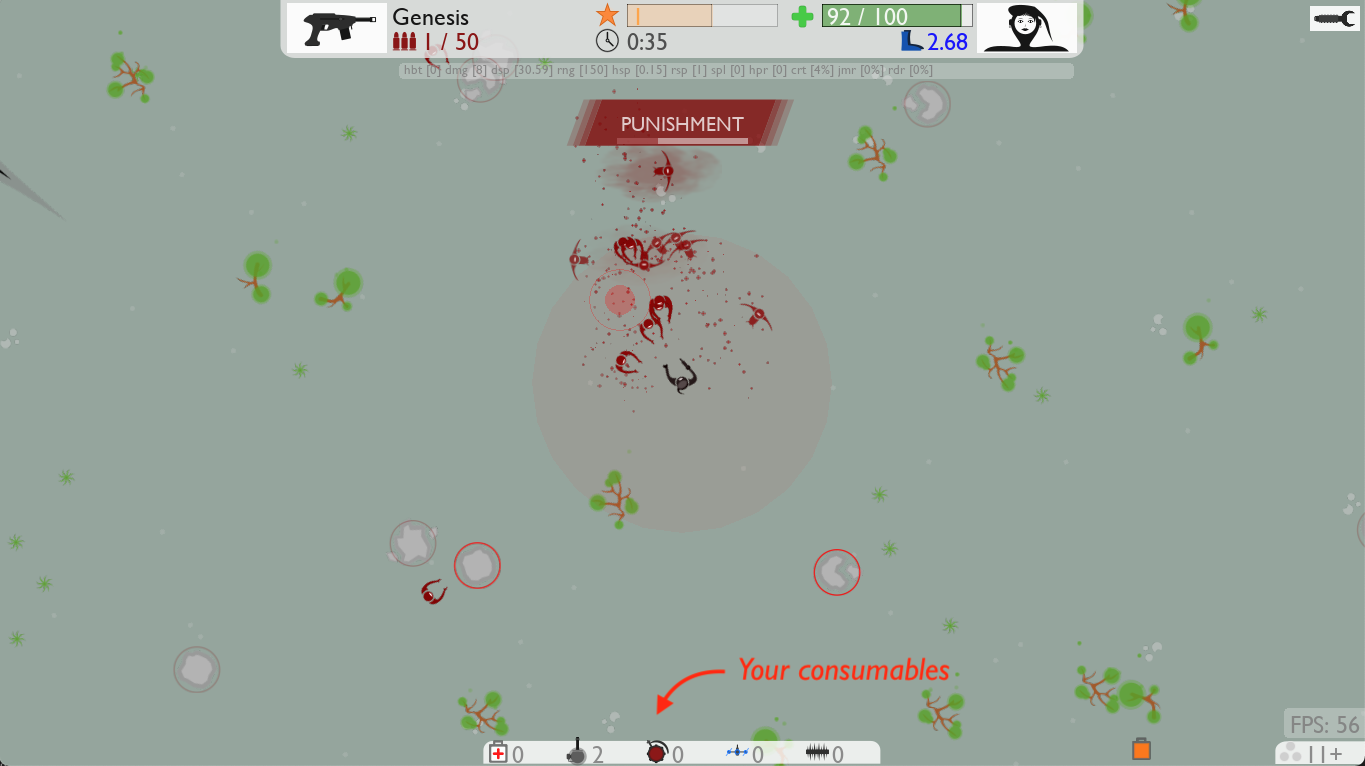 
Almost every hero starts with a different set of consumables.


Most consumables, one way or another, do damage to monsters, and they can be crucial for successful survival, yet many new players often don’t know how to use them properly.

There are currently 5 types of consumables in the game:

Let’s see what each of them does and how it works.


Heal, aka first aid kit, can be used to restore 100% of the maximum HP at any moment. There is a special option in settings called “auto-heal” which is already set to a value by default, which means that usually first aid kit will be used automatically when your health drops below a certain % of the maximum capacity. You can also use a heal manually by pressing 1 at any moment if you wish. Heal is extremely important in early and mid-game, and usually a bit less important in the late game as you would often have some other ways of HP restoration.


Turrets are automatic cannons that will shoot monsters. You can place a turret by pressing 2 on your keyboard. They have a good range and decent physical damage, but their ammo is limited and eventually, when they run out of it they will self-destroy. You can place turrets on rocks to make sure that their bullets will stuck in other rocks on the way less often. Turrets are a good defensive consumable that can really help you to keep the total number of monsters low and kill some spawners around them, yet in the late game, they usually become less relevant.


Grenades are the things that you can throw at the enemies and that will explode, doing quite a lot of fire-based damage. The fact that the damage is fire-based is important because some monsters have less resistance to it. To throw a grenade you should press 3 on your keyboard, but throwing them is not easy as there are 3 ways to do so:

if you did the tutorial or read Random Advice you would know that by now, but let’s face it, probably you didn’t 🙂


A successful hit with a grenade can kill 10, 30, or even more monsters.


Also, each blast of grenade creates additional powerful fire bullets which damage is based on the current minute, the same things that are created by Fire Ring / Circle – [redalgorithm.com]  bonus.


Drones are great because their DPS is much higher than turrets have, but they run out of ammo faster, thus you should really keep them a bit longer and use them in the mid / late game only when you are in deep trouble. Unlike turrets drones aren’t static, they will slowly follow the hero and you can bring them to any corner of the map with you. You can launch drones by pressing 4 on your keyboard.


Barricades can be placed on the map. When a monster steps on it (or if it’s placed directly on/under the spawner), the damage will be done and it will also have a significant slow-down effect on the monster. Barricades are generally a bit less effective than turrets and drones, yet with some updates and if placed correctly they can create a very nice wall (a safe space) behind which you can hide, reload your weapon, heal a little bit, etc. Barricades have another small, but important feature of blocking monsters’ projectiles, so hiding behind them can save you from monsters with range attack, yet your projectiles won’t be blocked by them.

Yeah, they do. Most consumables in your inventory will slow down your movement speed, each unit by 5%, which is a lot! Each grenade will slow you down by 1%. Perk Rocket Backpack – [redalgorithm.com]  can help to deal with that by reducing consumables weight by 50%.


If you carry a lot of consumables with you and wait for the right moment to use them for too long, you will move much slower, get more hits from monsters and die earlier.


This doesn’t mean that you should just drop consumables and/or use them as fast as possible, but it does mean that you should keep the fact that they slow you down in mind and if you pick up too many of them, you can consider using some of them earlier than you planned.


When you see the grey box in the late game that contains random consumables, it will often be a good idea to use them as soon as possible because they won’t be much of the help anyway, as move speed is usually far more important at that stage.

How to get them?

Almost any hero starts with some consumables, but you can also get them during the game.


You can find a grey case on the map:

It will appear randomly


The case will have a random consumable, but it will never contain a heal! First aid kits are generated separately, yet they are also consumables from the technical point of view.


In addition to that, you can get more consumables if you pick certain perks.

There are a few perks in the game that are all about consumables:

Some players dislike them because unlike all other perks, these don’t give a permanent positive bonus to the hero, instead, they make your consumables more effective and give a few of them. Once consumables are gone, these perks become quite useless, until the time you find more of them on the map. However, in practice, these perks can be very strong in certain situations where you need more DPS and firepower right now or very soon, and in short games when you do achievements.

How to use them?


Well, everything depends on your particular situation, but as general rule consumables are meant to be used during a critical moment when your hero can’t handle the current situation.


This means that, in many cases, the best time to use consumables is somewhere between 5 and 15 minutes, maybe even from the 10th to the 20th minute. Surely, they will still be helpful later, but usually, it’s smarter to focus on developing your hero, rather than relying on consumables in the late game.


Some players dismiss consumables completely, as well as special perks that make them stronger, and from the beginning trying to get perks that will give good long-term pa*sive bonuses to the hero, but this greedy approach can often lead to a failure, especially if you play in Hard Mode. The thing is that without consumables, there might not be a late-game at all, and you should always keep that in mind.


If we an*lyze a few games and how they usually go, there is often a hard moment for every player, a moment when you clearly don’t have enough DPS and almost being overwhelmed, getting injuries and everything goes badly. You can pray and wait for the miracle, a special bonus or a special perk, but if you saved your consumables this would be the right time to use them, and ones the map is cleaned, you may live far longer after that.

This is all for Red Algorithm What are Consumables in Game hope you enjoy the post. If you believe we forget or we should update the post please let us know via comment, we will try our best to fix how fast is possible! Have a great day!