This is a curated list of mods that I use and enjoy for Mechwarrior 5, and a how-to for mod installation and ordering. These are mods that I actually use, so unless I miss something, they will all work together without beating eachother senseless with conflicts.


These mods should also work for coop, and once you get your mods directory the way you want it, you should be able to just dump the entire contents into one big zip and then send that to your friends so that they have a duplicate modstack.

These mods only affect visuals or sound or provide information without altering difficulty or gameplay.

Mods in this section are just for fixing problems with the base game, which makes them the least fun but the most important.

Just a how-to for installing Smooth Lasers as an example of how to download and install mods on NexusMods.

The order in which MW5 loads your mods will determine which mod’s changes will actually stick when two or more mods modify the same asset file. The mod that is loaded last usually wins–whatever changes it makes tend to take precedence.


If two mods report a conflict in the in-game Mods list, it means that there is at least one file that both mods are modifying, although this can happen and both mods may still do something. Sometimes this is even part of how the mod is meant to function. When a mod is meant to modify a specific file or files after another mod is loaded, this is what’s called an “override”. This is exactly how Prime8’s RPG Icon Color Override – [nexusmods.com]  works. The main mod does the bulk of the work of compacting the GUI, then the RPG Icon color override loads and overwrites the assets pertaining to the icons indicating tier level, resulting in both mods working together.


You can see the order in which your mods are being loaded (except where default load order is concerned, see below) by editing the file “modlist.json” in your mods directory using notepad.exe or any basic text editor, the default location being [Drive Letter]\SteamLibrary\steamapps\common\MechWarrior 5 Mercenaries\MW5Mercs\Mods.

As you can see above, each mod has an entry with the following form:


“a name matching the name of the mod folder in quotes”:


So, if you want to change the order in which two mods load, you would literally select/highlight all of that, including the quotes and commas and drag/drop or ctrl-x/ctrl-v it where you want it to be relative to the other mods.


The only exception to this will be the last listed mod, which will NOT end with a comma.


Steam mods follow all the same rules as above, but have the added wrinkles of showing up in modlist.json as a long number and also of not being stored in the normal mods folder, but rather in \steamapps\workshop\content\784080. The number they will show up as in your modlist.json is their workshop ID, which will be part of the URL at which you found the mod. For example, Colorized Heat Gauge can be found at https://steamcommunity.com/sharedfiles/filedetails/?id=2507466797 and its workshop ID is, as expected, 2507466797. If you subscribe to it, you will find a subfolder in \steamapps\workshop\content\784080 called 2507466797


Thanks to commander matercula for helping to correct this section!

You can find out if a mod has a default load order assigned by editing its mod.json file, which will be directly inside the mod’s folder.


For example, if you have Double Heat Sink Base Cooling Rate Fix installed correctly, you’ll find the mod.json file for that mod in

As you can see, Double Heat Sink Base Cooling Rate Fix has a default load order of 51, which will overwrite any mod with a DLO 50 or lower–it’s so high that it will often overwrite things you don’t want it to overwrite, like the changes Mech Fixes makes to vanilla Cicada and Jenner variants. 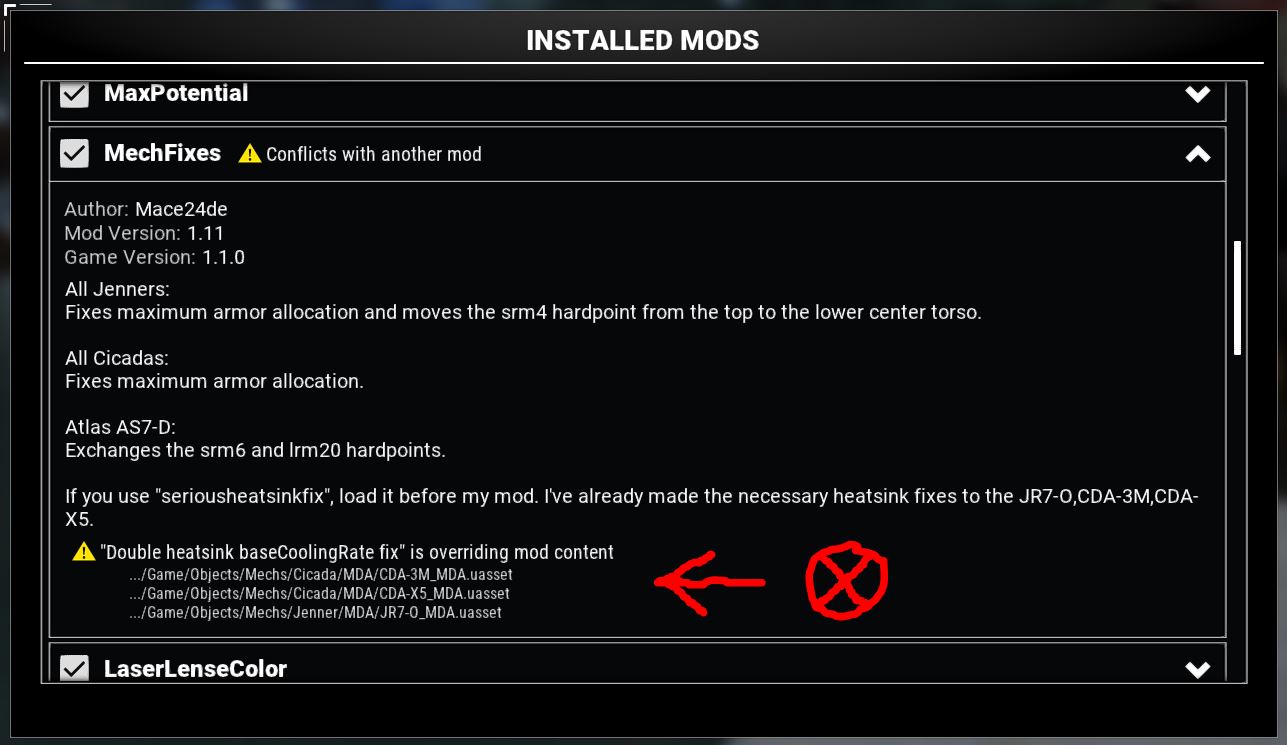 Happily, I’ve found that there is a mostly catch-all fix for this, which is to simply change whatever value is assigned to the default load order of the problem mod to 0. This will force the mod to respect the order determined by your modlist.json file.

And with that correct, the problem is fixed.


I currently have DLOs altered for these mods in my stack:

I’m not saying that this is the best way to order them, but it works for me. This list is in the same order as the modlist.json file.


After culling mods post-Kestrel, there was so little overlap that the ordering almost doesn’t matter, so I arranged my modlist.json in the same order as the mod folders when they are listed alphabetically. The exceptions are the steam mods being near the bottom, as they live in a different directory, and I have the infantry mod at the very bottom with Infantry Tweaks right above it because ancient forum wisdom once spoke of technical problems if it is not listed last.


These are the workshop ID’s of the three mods which are only found on Steam:

When I notice a mod on this list has been updated, I’ll note it here.

Re-added TTRulez AI – [nexusmods.com] . Updated for Kestrel and everyone is less stupid again! I think! Most of the time.

Re-added Advanced Zoom – [nexusmods.com] , as it has been fixed for Kestrel

False alarm, the problem was caused by the previous version of Purchase Salvage.


FakeID is causing a crash in career missions when accepting a contract. Removed from the stack for now.

I have culled a number of mods to remove the ones broken by Kestrel and also just to remove mods that I suspect may have issues, ones I don’t really use much or don’t care as much about anymore, fixes that I’m not sure are necessary any longer, or moreover mods which I just don’t plan to use for the immediate right now.


Mods Removed Because Kestrel Broke Them

In addition, I moved Remove Jumpship Animation to Fixes, because as far as I’m concerned, it’s a fix.

As expected, the DLC has wrecked old mods. The guide title is changed to indicate that it’s Outdated. I will resume daily nexus trawling and when I’ve assembled a respectable stack, I will update the guide again. For now, rather than clearing it all, I’ve decided to just leave the mod showcase for future reference, and for anyone who wants to remain on the beta branch to play (if that still works).

Legend of the Kestrel Lancers – [steampowered.com]  comes out tomorrow. When Heroes of the Inner Sphere came out, it broke every mod in existence and while this one may fare a little better I will not be surprised if everything breaks again.


If that happens I will be re-assembling the stack from the ground up as I collect and test a new collection as the mod authors all update. I will either remove all of the mods which are broken or just label them broken. But other mods may be gone forever. For example, the author of MWO Style HUD has said on his mod page that he’s no longer able to update, so if it breaks, that’s it. No more MWO Style HUD.


We’ll see what happens, but you can expect that the guide might be wrong or super wrong for a few days while I get a handle on what the expac has done to modding.

Hope you enjoy the post for MechWarrior 5: Mercenaries List of Mods in Game + Links Download, If you think we should update the post or something is wrong please let us know via comment and we will fix it how fast as possible! Thank you and have a great day!