This guide will help you find and/or solve some of the riddles & secrets in the game.

If you find this guide helpful, please consider giving it a LIKE and/or FAVOURITE, so that more people can find it!

If you know more secrets, please consider sharing them in a COMMENT and I will add them to this guide.

If you dislike this guide, please consider writing a COMMENT so that I can improve the guide!

Please don’t use this guide if you haven’t tried to find or solve these riddles/secrets yourself!

Feel free to use it when you don’t find the secret on your own after trying for some time, or if you don’t have the strength, patience, concentration or time to find or do it on your own.

I don’t want to judge you for what you do with your life or how you play, I just want you to know that finding/solving these secrets on your own may be more satisfying.

You can share this guide, e. g. to help people in the discussion forum quickly without having to write a long answer.

Use Right click + Copy on the link below and paste it into the discussion post (or use the “Share”-button above).

You can find an arcade that lets you play the (gem) combination game “Gembine”.

It is basically the game “2048” in a different graphical format (gems instead of numbers).

Rule of thumb: You want to play (mostly) with 3 direction keys and concentrate higher level items in one of the four corners of the square.

Avoid low level gems on the lines adherent to that edge. Try to place low level gems in the middle. That way they have two possible directions from which another low level combination gem can come from.

When getting above 15.000, use the preview on the right to make better decisions.

Once you beat the highscore of ~54.000 points, the game will give you a message:

(You can’t find the buried arcade without beating the highscore!!!)

“Something strange is happening. The high score has changed to: 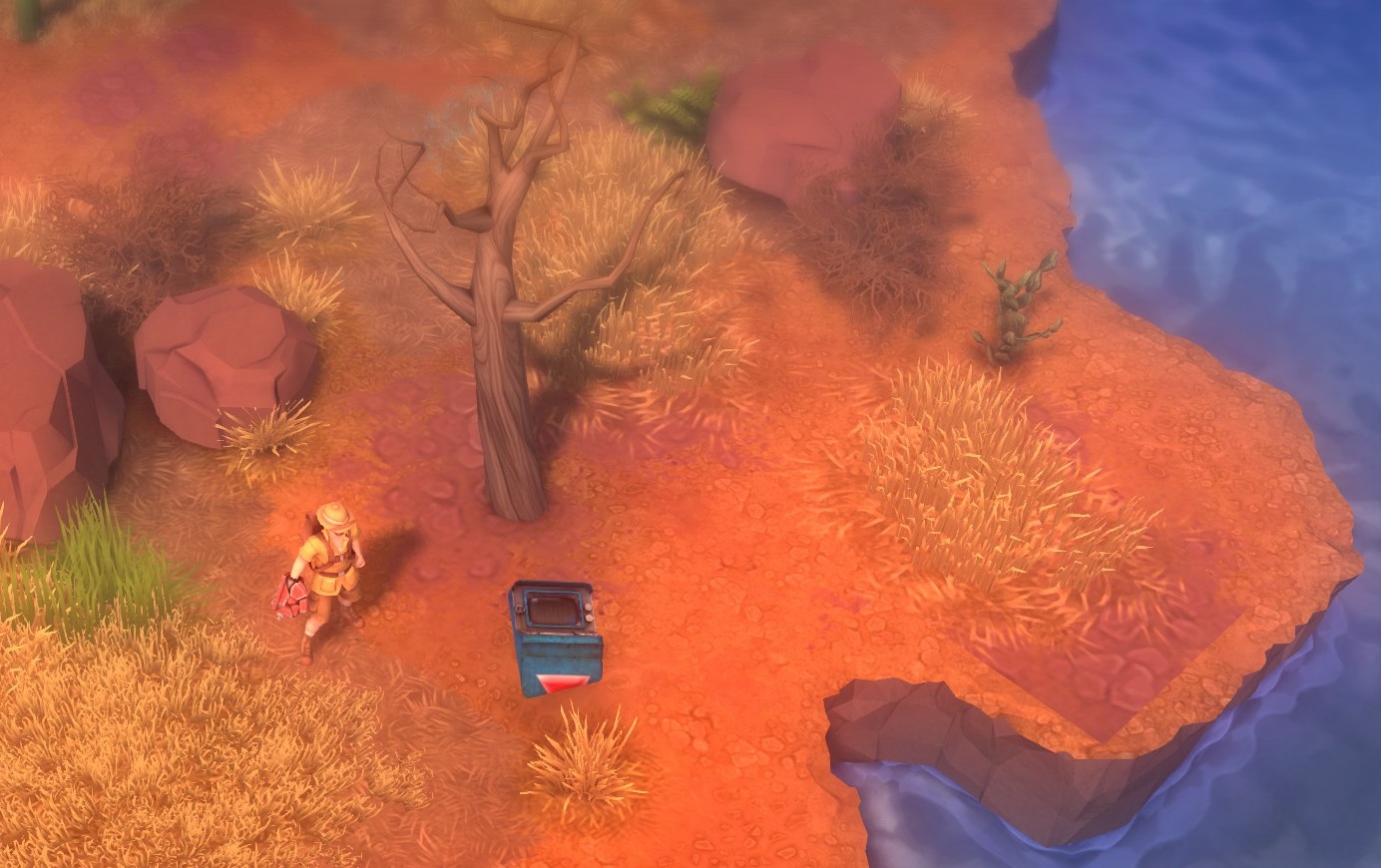 2 mana shards, 4 electronics. – every time you go there after dying! (Maybe that’s a bug?)

Tip 3: Ever heard of the philosopher’s stone(s)?

There is an invisible walkway, between the stones in the water, starting from the coordinates above. 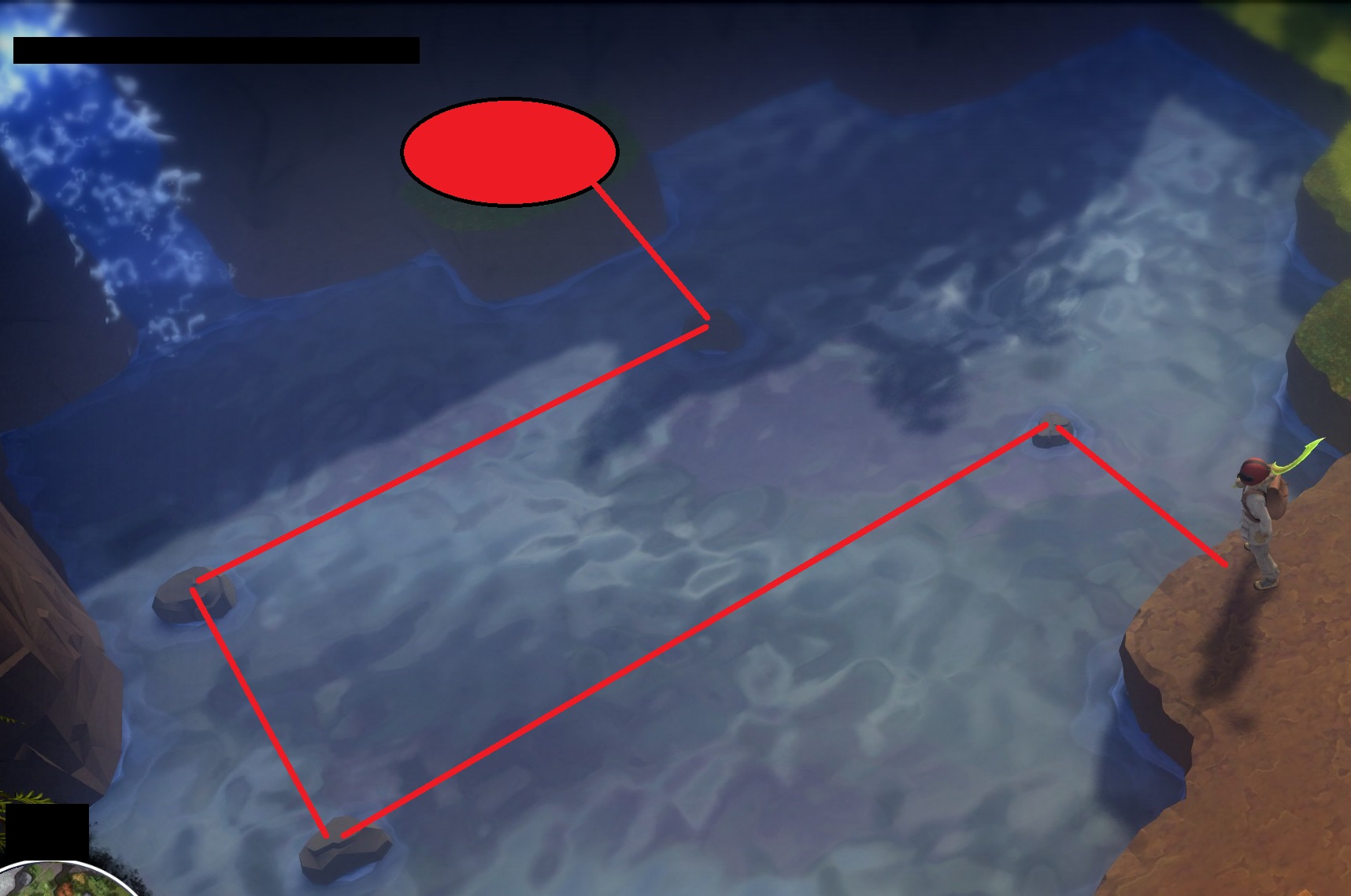 How to access the ocean door is – as of yet – an unsolved mystery. It cannot be opened yet (as well as the red chest next to it).

However the angular vault door can also be found next to the shelter bunker on the Crown(*1), near the landing pad(*2) and other locations. It is highly likely that there is a part of the Undercrown that is not accessible to us yet that will allow us access this red chest later on.

You can however already destroy the chest with carefully aimed grenade throws from above.

This will only result in you receiving materials from the destroyed chest though.

I consider this to be a bug and think that you will be able to receive a recipe /aliud when the full game releases on Nov. 16th 2021. 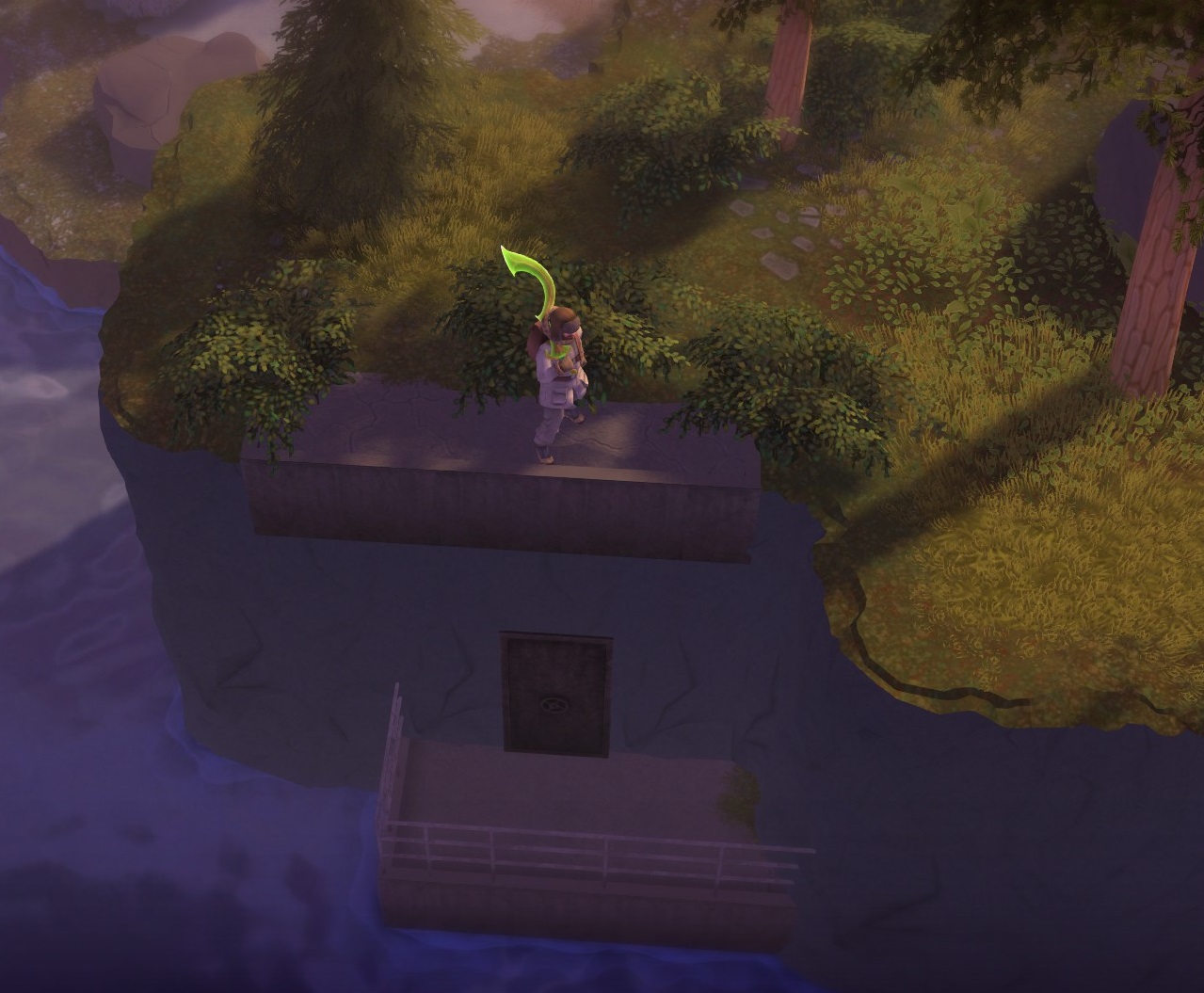 (Screenshot does not contain the red chest next to the door, because I already destroyed it. Jumping down is deadly.) 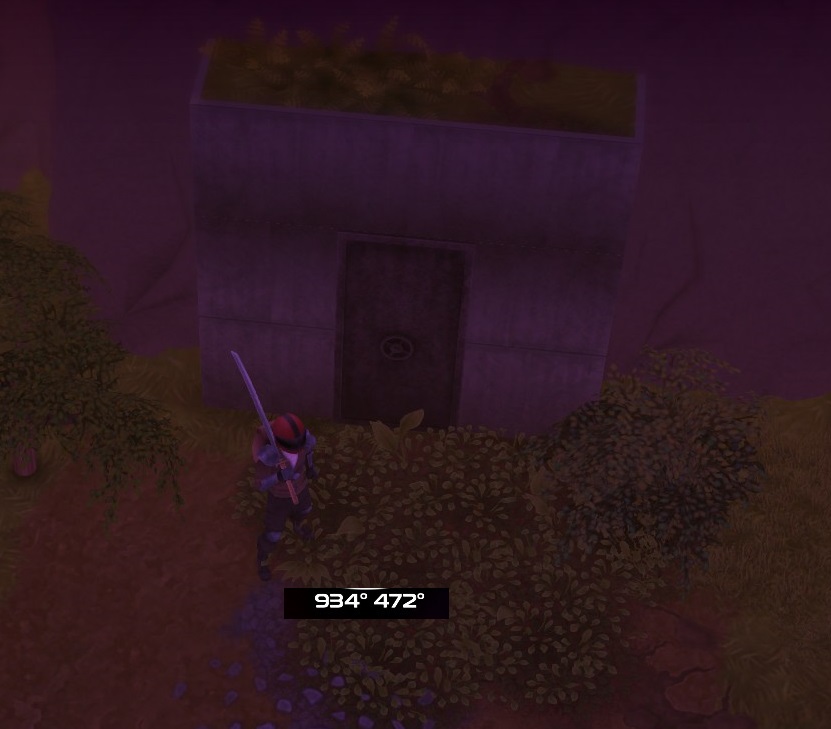 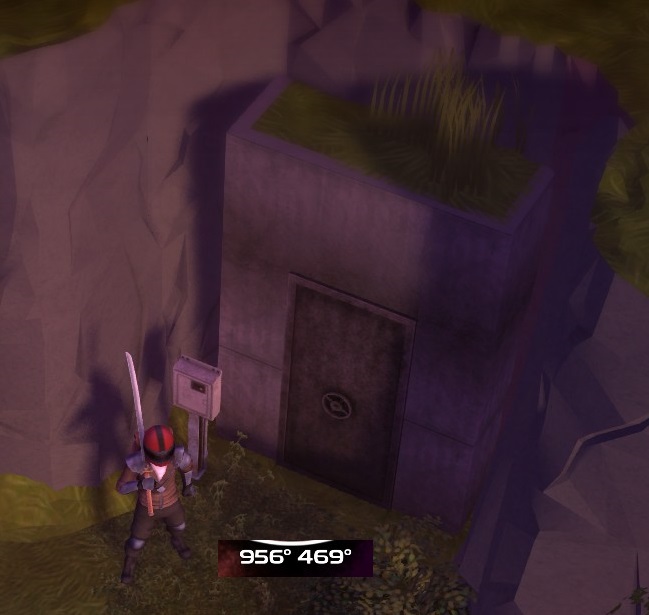 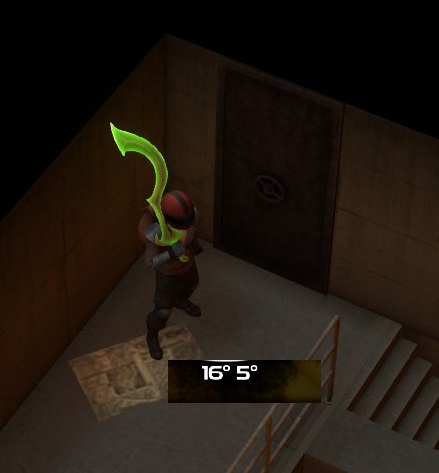 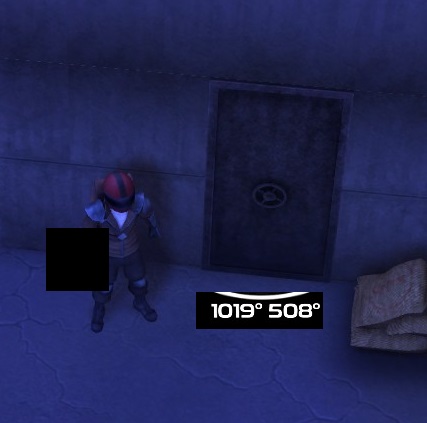 You may be missing an enemy type in your “collection” when opening this section in the menu, but want to find out what it is to complete your encyclopedia.

Tip 1:Don’t forget your water in the (Sunburn) desert.

Tip 2:It will only hunt you when you are already dead.

Vultures. You can find them in the “Sunburn Desert”.

You need to collect the hunting rifle and go up the hills in the desert to be on a similar height level to the birds (you cannot shoot upwards much). Then wait for them to come remotely close, aim and hit the trigger. You might have to aim UNDER them to hit them. That’s because the “hitbox” (the invisible programmed grid/raster where you have to aim to land the shot) is actually under the bird not on top of the graphical model. The optical marker (cross) will show on the bird if your mouse is within the hitbox while aiming.

One egg per kill and an encyclopedia entry. That’s it. If you want the full entry (enemy name/type | description | drops), you have to hunt 8-9.

The (single) red telephone can be found in the king’s bunker on Ark level 2.

When you interact with the red telephone, you get the message:

“The phone is not ringing yet” – indicating that there will be an event later.

The map next to it shows you some red spots all over the island(s).

Those red points are…

… – contrary to what you might assume – NOT the (mana) camp fires the protagonist has built. They are actually markers for dense populations centers (cities etc.).

As of yet unknown.

We assumed before that you likely have to reach ascension level 3 on ALL link towers on the map and totally clear the map of enemies. That is – at least for the current version of the game – unfortunately incorrect (disproven). There were a few theories around, including the theory that there are telephones at the marked spots which have to be “activated” in a certain order, but they got ultimately discarded when one of the devs announced on the Discord server that “there is currently nothing you can do regarding the phone”.

…so… yeah… sorry guys. Let’s hope for an implementation in the future!

Nobody has done this as of yet (as far as I know), because it’s a super boring grind. Serpent’s Crossing alone has over 334 enemies that have to be defeated 3-4 times (= >1000 enemies) to reach ascension level 3. Please let me know if manage to do it anyway and what happened afterwards!

The “red telephone” is probably a reference to the “Moscow-Washington-Hotline“.

This system allows direct comm. betw. the leaders of the USA and the Russian Federation (formerly: Soviet Union). Although being known as the “red telephone” in pop(ular) culture, the hotline was never a telephone line, and no red phones were used. Although being proposed before, it was finally established after the Cuban Missile Crisis in 1962, since messages sent through the indirect comm. channels took 6-12 hours to decode – a dangerously long time for a confl. that could have sparked a nuclear war.

The 2 countries signed the “Memorandum of Understanding Regarding the Establishment of a Direct Communications Line” on June 20, 1963, in Geneva, Switzerland (through repres.) – the 1st time they formally took action to cut the risk of starting a nucl. war unintentionally and therefore establishing the system.

Have you found it yet? You can easily find it on the map, although it does not show up as a point of interest (POI) anymore.

Tip:Ever played “Blind Man’s Bluff/Buff”? The door is also at a “warm spot”. Some may even say you could get a sunburn!

What it is all about?

Opening the door is currently one of the hardest things to achieve in the game – if you aim to open it in the intended way. It enables you to access to a special and secret part of the story.

How to open it:

It can only be opened at a certain time of the day/night* (it will glow in a ghostly blue) and you will need the “Surreal Key”.

Getting the surreal key is the hard part:

Have you ever died in the game? Well, let me tell you something about that.

When you return to the point of your most recent death, you will find a skeleton of yourself that you can loot, right?

Well, if you die before reaching it, your old skeleton vanishes and gets replaced by the more recent one, right?

Now apply that to what you know about the story…

The one-armed king – for unknown reasons – has the surreal key. So to get it, you have to clear ALL of the tombs in the game and reach the tomb of the one-armed king with a gas mask ENTIRELY WITHOUT DYING!

You will find the skeleton of the one-armed king in the tomb, which you can then loot (since it is technically your last point of death).

As soon as you die once, your skeleton in the tomb vanishes and the most recent skeleton appears on the map.

If you manage to clear all the other tombs without dying and to find the skeleton of the king, you can loot him and he will drop the SURREAL KEY. 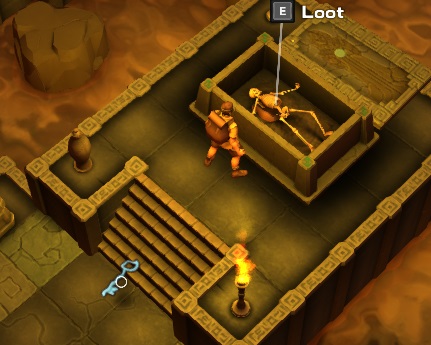 Now you just have to reach the surreal door and solve the mistery of what’s beyond it.

Currently, the door can be opened, but the level behind it hasn’t been added yet. So if you want to find out what’s behind it, you probably better wait for the release of the game on Nov. 16th 2021.

Tip: You can create a new game in the main menu under the second tab “Save Slots” and just create a second save slot. You can also try to Alt + F4 your way out the game if you have died to avoid detection of the death by the game and doing everything all over again (untested assumption – I have no idea how and when the game saves).

Alternatively: Use the devkit to manipulate your save OR edit it any other way (I don’t know how to) – Save route: C:\Users\[UserName]\AppData\Roaming\10tons\DYSMANTLE\save

Feel free to write a comment and be remembered here for E T E R N I T Y (as I will add your username to the discovery)!*

*(Eternity may cause pestilence. The writer of this guide does not guarantee your medical safety or wellbeing when commenting under this guide.) 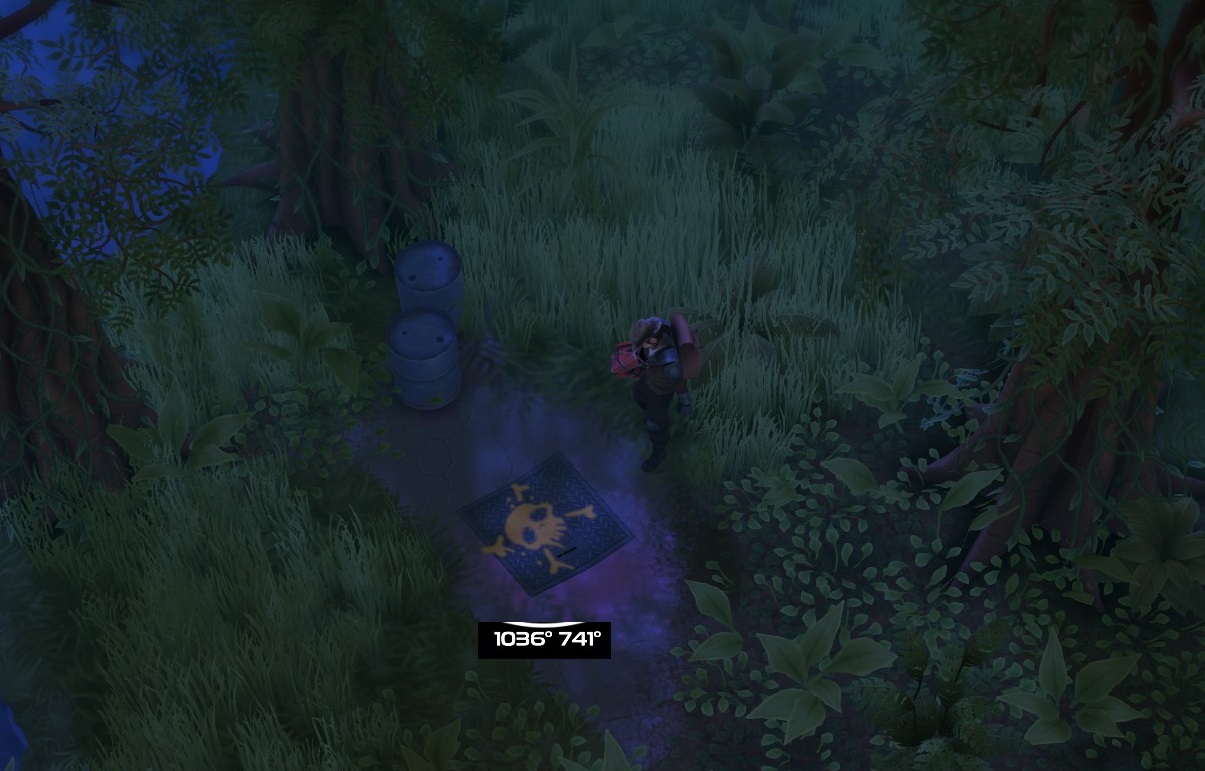 Discovered by the legendary parliame aqua

Here we come to an end for DYSMANTLE All Secrets Achievement Guide hope you enjoy it. If you think we forget something to include or we should make an update to the post let us know via comment, and we will fix it asap! Thanks and have a great day!