In this guide, we’ll go to the deep of every character in the game.

Let’s get into it then.

Well, Sayori’s story is the easiest one. She’s the one who joined the club first.

Sayori is MC’s childhood friend, but we can say that she haves a two personality, a one side that feels dark, a other side shiny as sun.

Her depression mostly comes from MC, mc is not caring enough for her in the game. She’s getting more depressed by Monika, and normally, she couldn’t handle it even MC told her that he loves her.
Because of Monika. In Act 2, we can’t see her much, so she’s just a first half character, but might be the most important for MC. That’s why Monika got hanged her though. 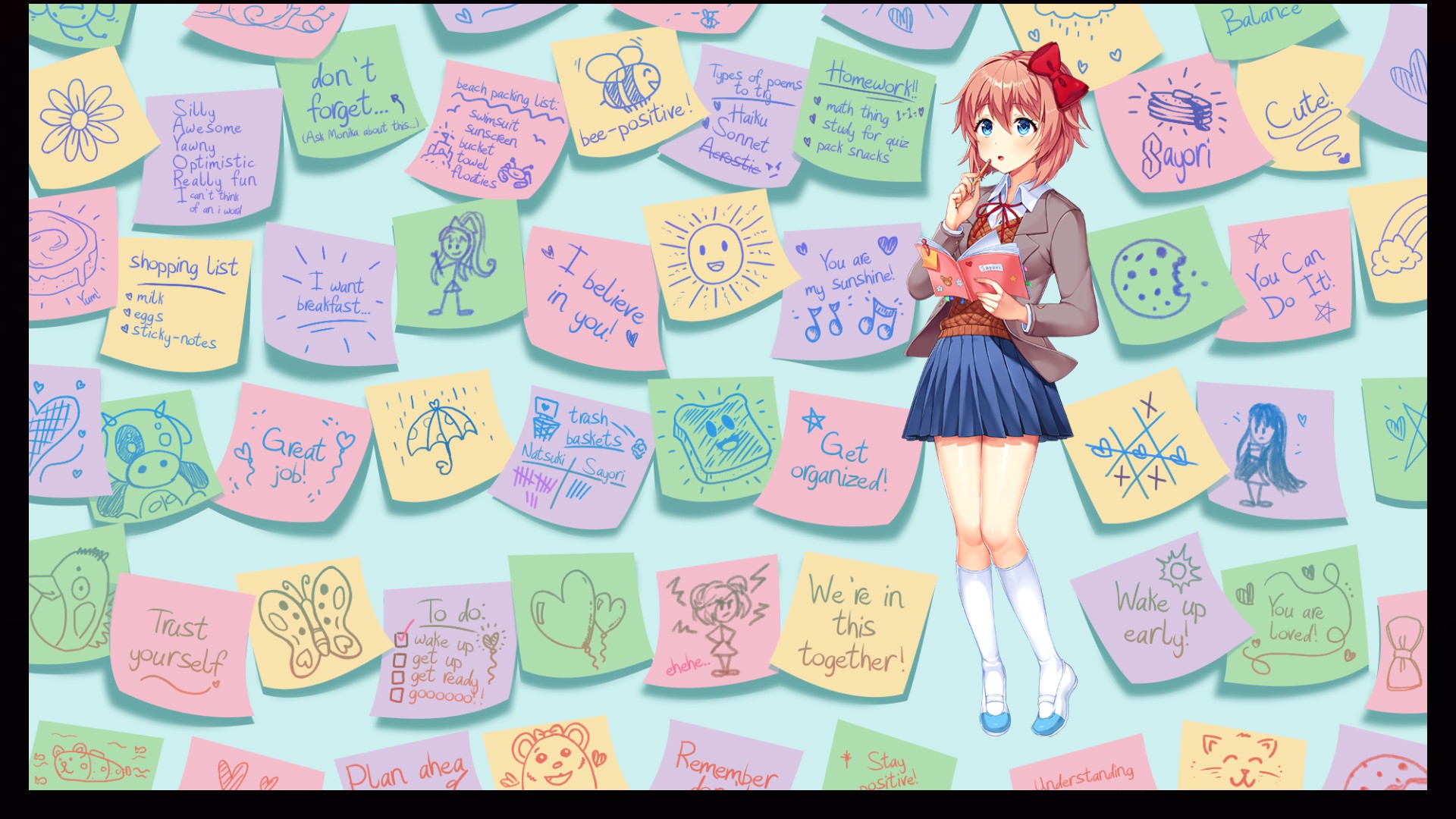 A Special poem(not poem but goes by poem) of Sayori

Natsuki, cute but weirdo girl for so many people.

She’s first cla*s, smaller than other every character, his mom is known as dead/gone.
She lives with his father, gets beating almost everyday, she loves her dad, she wants to hear good things from him. But dad doesn’t even cares. Not one bit.
She thinks Manga is Literature. And hides her Manga Collection in School, clubroom.
She’s a jealousy girl, but careful, bakes for her friends, tries to help’em. She’s the one joined the club before MC. 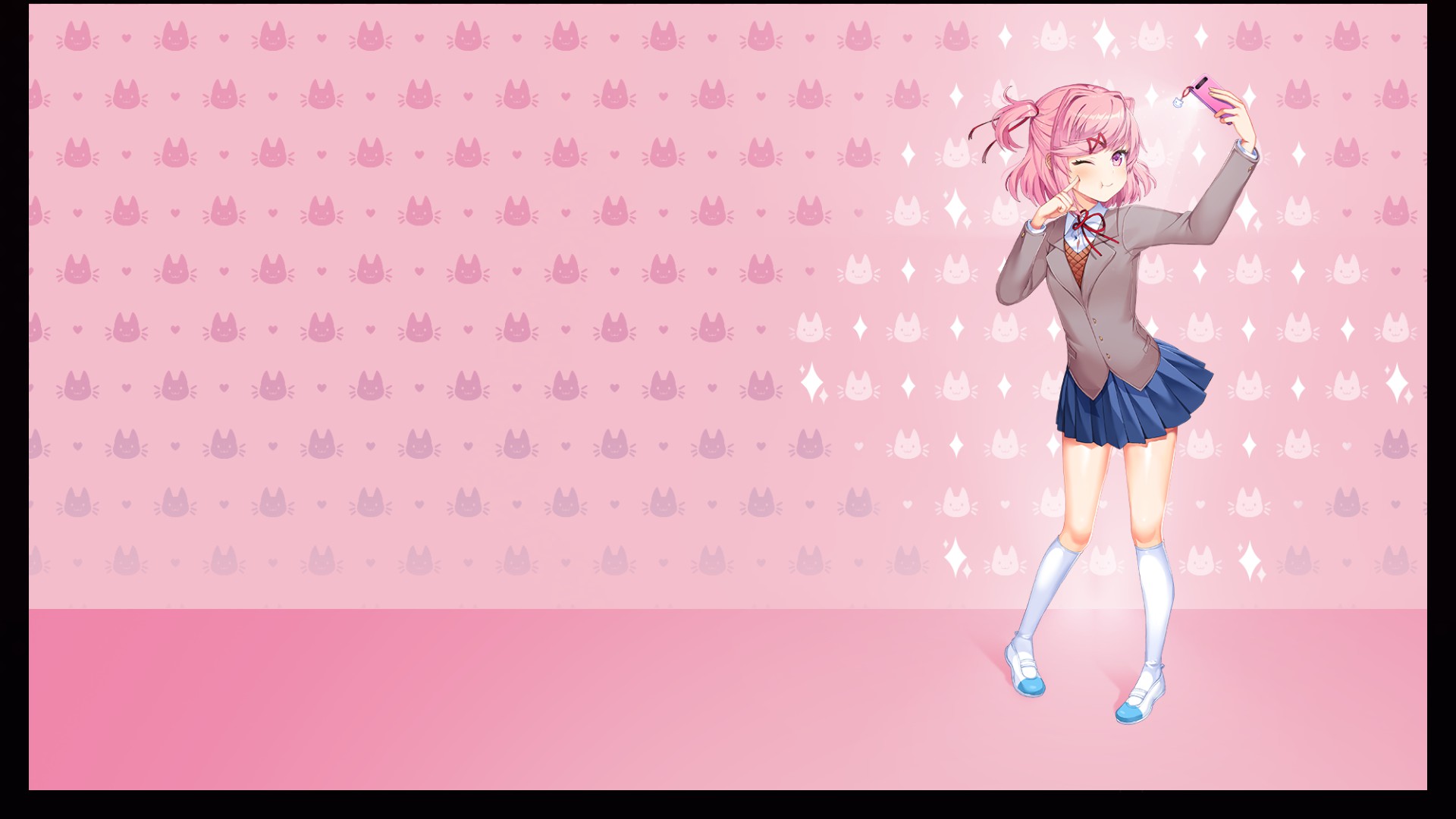 Poem of Natsuki, talks about her Dad. 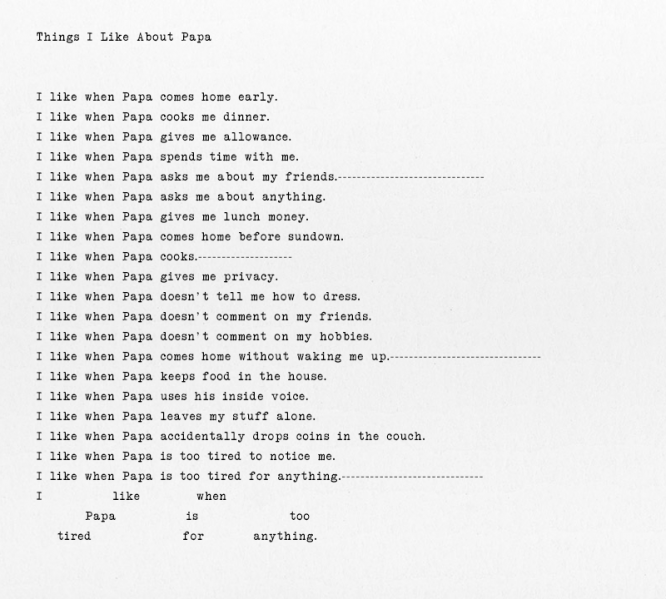 Monika is acting like she’s a villain, but trust me, she’s not. We’ll talk about that more in Yuri.

And she wants help in act 2, in another scene, she wants to talk with us but something wont let her.
She and Yuri might be enemies in the background. Yuri is connected to Project Libitina(we’ll talk about that she migh be Libitina in the Yuri page). According to her book. In normal DDLC, monika has a voice recordings that she needs help. She’s challenging with something. Might be Yuri, might be something connected to Libitina. Anything. Monika is stucked character, not much story outside of the game for her.

She likes to have a “free own of her will“. She knows she’s different, her “freewill” comes from anything I mean, literally anything, might be about something with her programming(or some mistake happened about Libitina, and she got a self-aware somehow) And she still dont knows her enemy. She justs wants to fix this all back, to DDLC not to happen. In side stories, nothing explained about that. A new game requires to know this all. And there’s a chance that we might be playing Monika in the new game. But there’s one more thing, DDLC Characters comes from an another game, Its proved by by “The Game Theorists” On Youtube. Probably they all came from an Horror game. In a Parallel Universe(we can say that the 2nd come coming) We will prevent DDLC from the beginning, DDLC is not going to happen if we can intervention it. Its proved by “The Game Theorists” and their theories are very sharp, even we can’t say %100 possibility, but we can surely give a %80 for the Parallel Universe game. They really might be coming from an another horror game, adapting horror game characters to a Literature Club game, kinda scary. Bu even in that game, Monika is smarter again. Because she has a self-aware, and she’s the one who gives a information about the other worlds(game) tha she knew them, they were together in that universe(game) too. It gets up to %99 from %80 now. Monika’s self-aware is going to be a lot help in the new game too. Monika wants our help. She will be the protagonist. 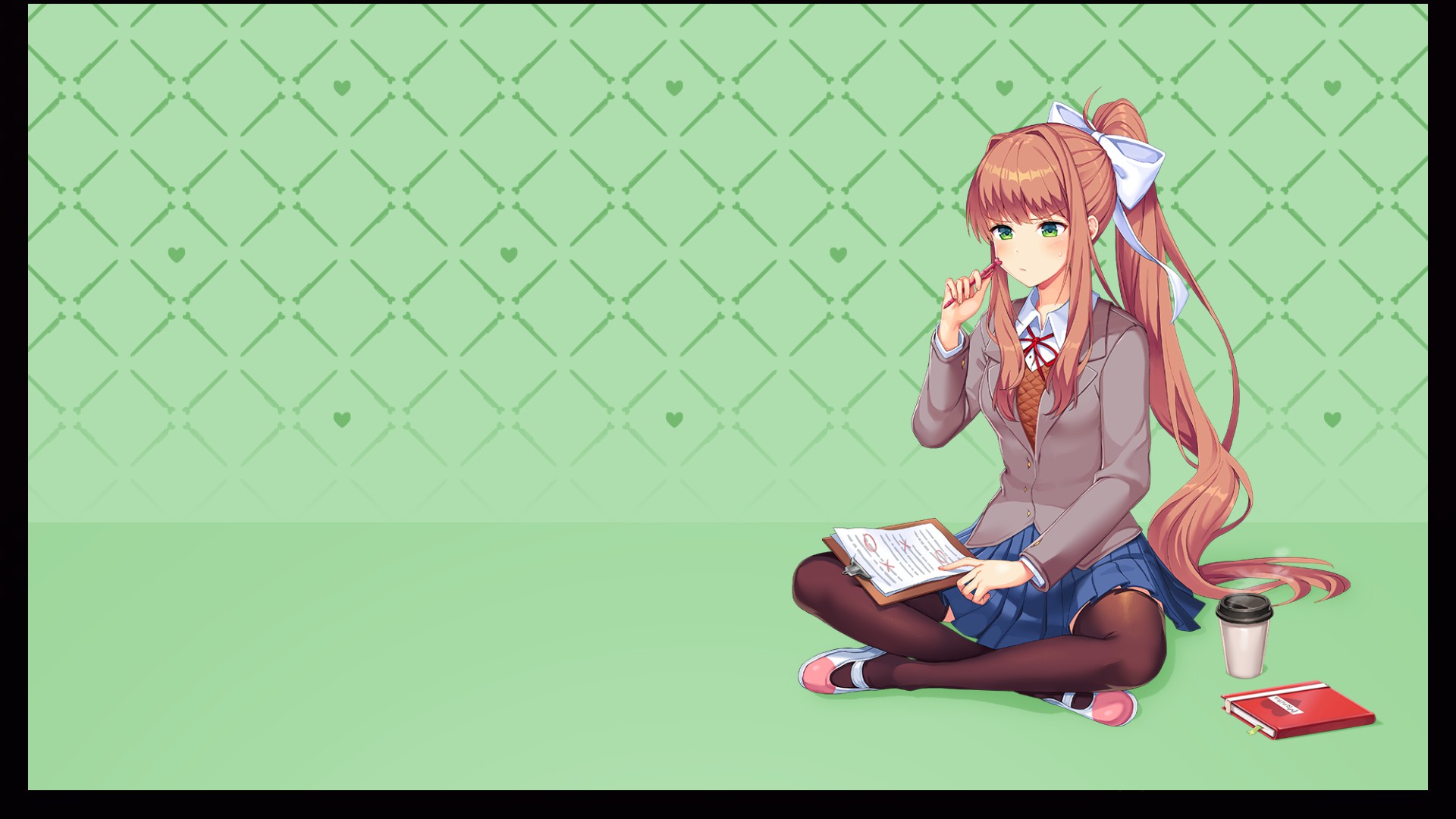 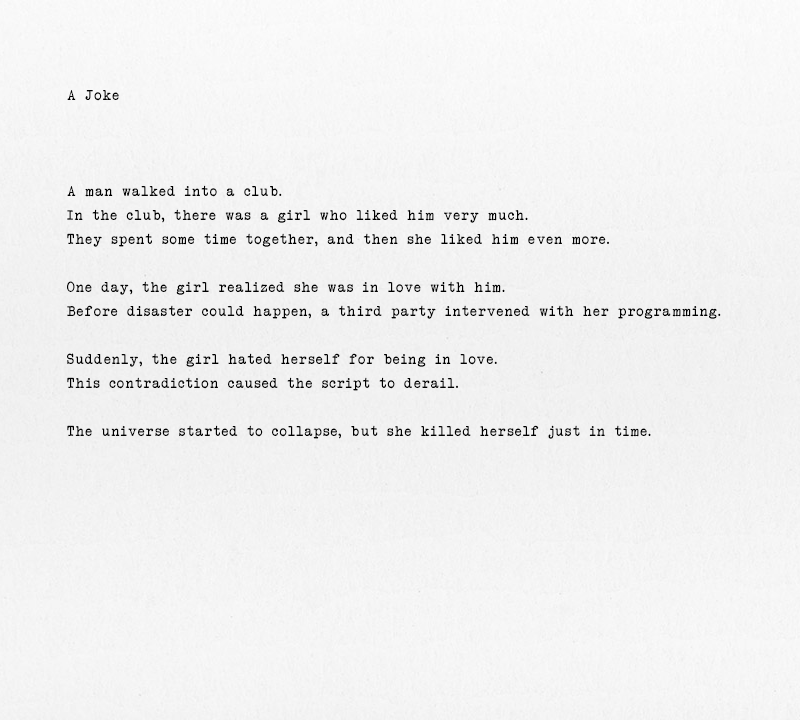 Yuri, the one who is mixed.

Well, yuri likes deep things, horror, cutting herself. And the cutting thing not comes from Monika’s programming attack. She was already into the knifes. She’s the one who joined 3rd member to the Literature club. Yuri has a weird personality, cant say she have two or one personality. Acts chill sometimes, but sometimes, she gots panic very much. And It is connected to her past, Project Libitina days. Some people says she’s libitina herself. Yes it might be have a high possibility. But company can make lotta subjects if they can make a amazing thing like a Libitina. But then https://projectlibitina.com/ the occasional behaviors of Libitina, almost is the same with yuri, twitching eyes, self-harm, laughing and vocal tics happened a lot to yuri in the 2nd act.

Yuri always reads the samebook “portrait of markov” It’s have a eye picture on it. Like libitina’s 3rd eye. She definetly have a connection to Libitina(or she is libitina herself). In one of 11 special poems, she haves a acting poem, well I put the poem down below, but I’ll tell you some about that poem here too. I can give a potential %90 to Yuri is the Libitina. And Monika might get self-aware from because of Yuri got putted in the wrong game.

Yuri talks about that she’s waiting for something, “I shouldn’t blow up my cover” she knows that Monika haves a self-aware, its the truth. It makes the possibility of she’s being libitina higher and higher. It would be shocking if Libitina Is not Yuri. But the question is, why Yuri’s hair, eyes, different from Libitina? In act 2, we almost got scared by Yuri always, she’s acting crazy, Monika hits hard, but she answers worse. Why Natsuki is not like that? Because Natsuki doesn’t have a connection to Libitina. Not one bit. Yuri always acted like Dominating Monika. That’s why she’s the most popular after Monika though. She was a Subject in her small ages too, might be 3,4,5 she was child. That’s why she’s getting panics unnecessary. That’s why she’s into knifes. And the book to. Dont forget it.
She likes to escape her Panics and stress. That’s why she loves Green Tea. In the new game, we’ll might see fight of her & Monika. And yuri might be a toy for the Project Libitina Company too, or like I said high possibility that she’s the Libitina. In side stories, Sayori helped Yuri a lot. But as we can see from Act 2, it didn’t have good affect on it. That’s a one more point about to be careful for her. Yuri thinks that she might should go to take a Therapy. She knows her psychology is ruined up. 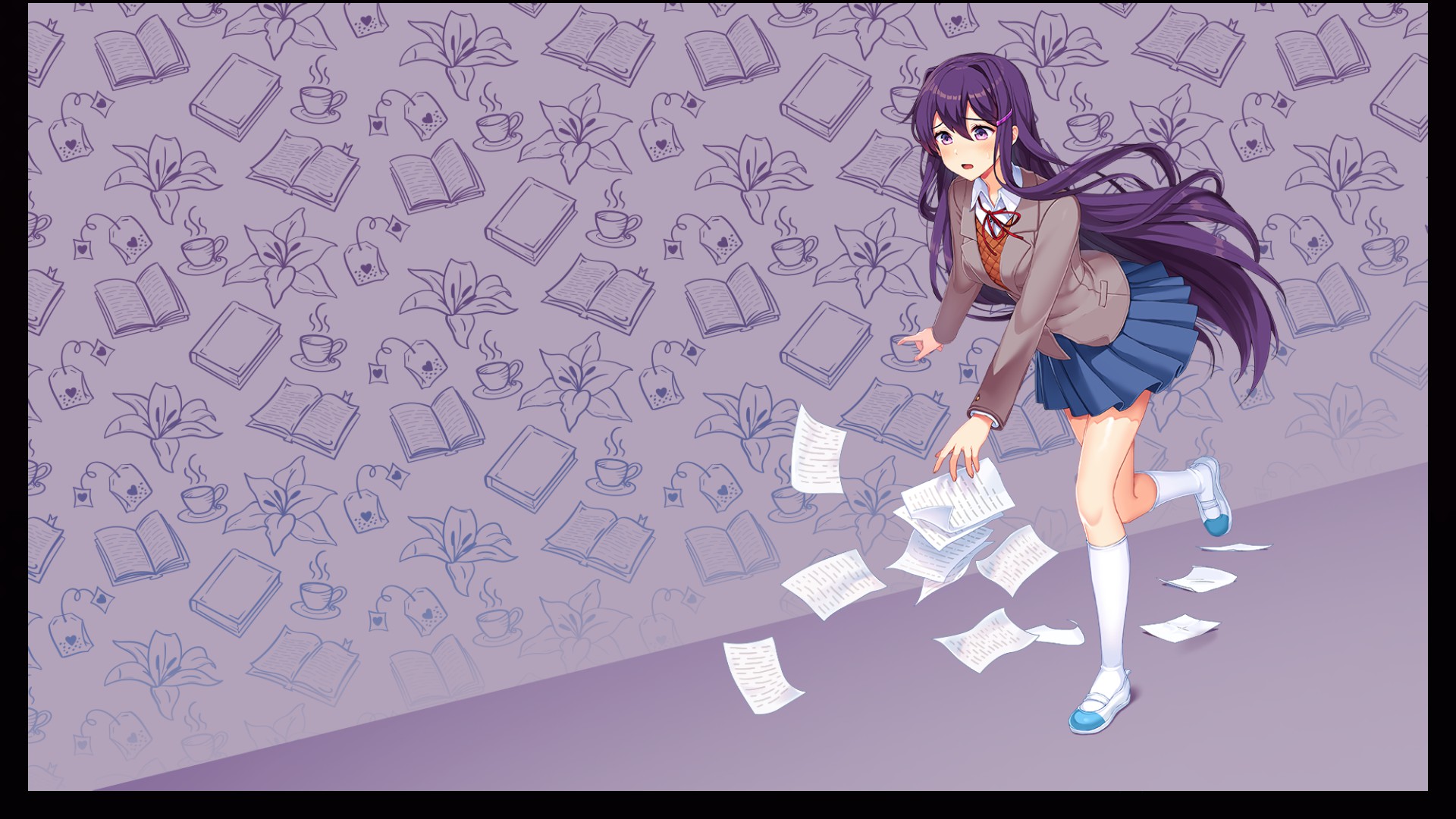 Libitina’s secret poem. Informations about her.

Yuri talking about her therapy in that poem. 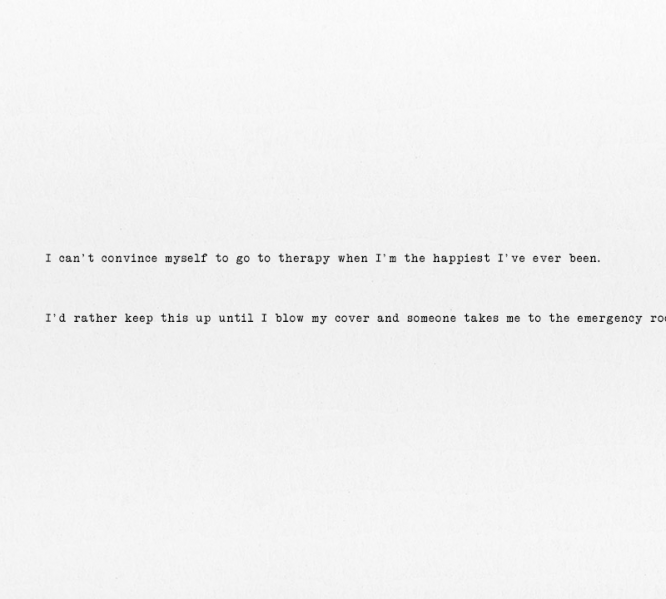 And yes, “til I blow up my cover” She’s not like Natsuki or Sayori. It proves again and again.

Well, if u think there’s a wrong thing/things in the guide, you can text down below. I’m always here for a Discussion or answering a Question.

And if the guide helped, can you please rate & give a prize if u can? I’ll be appreciated. 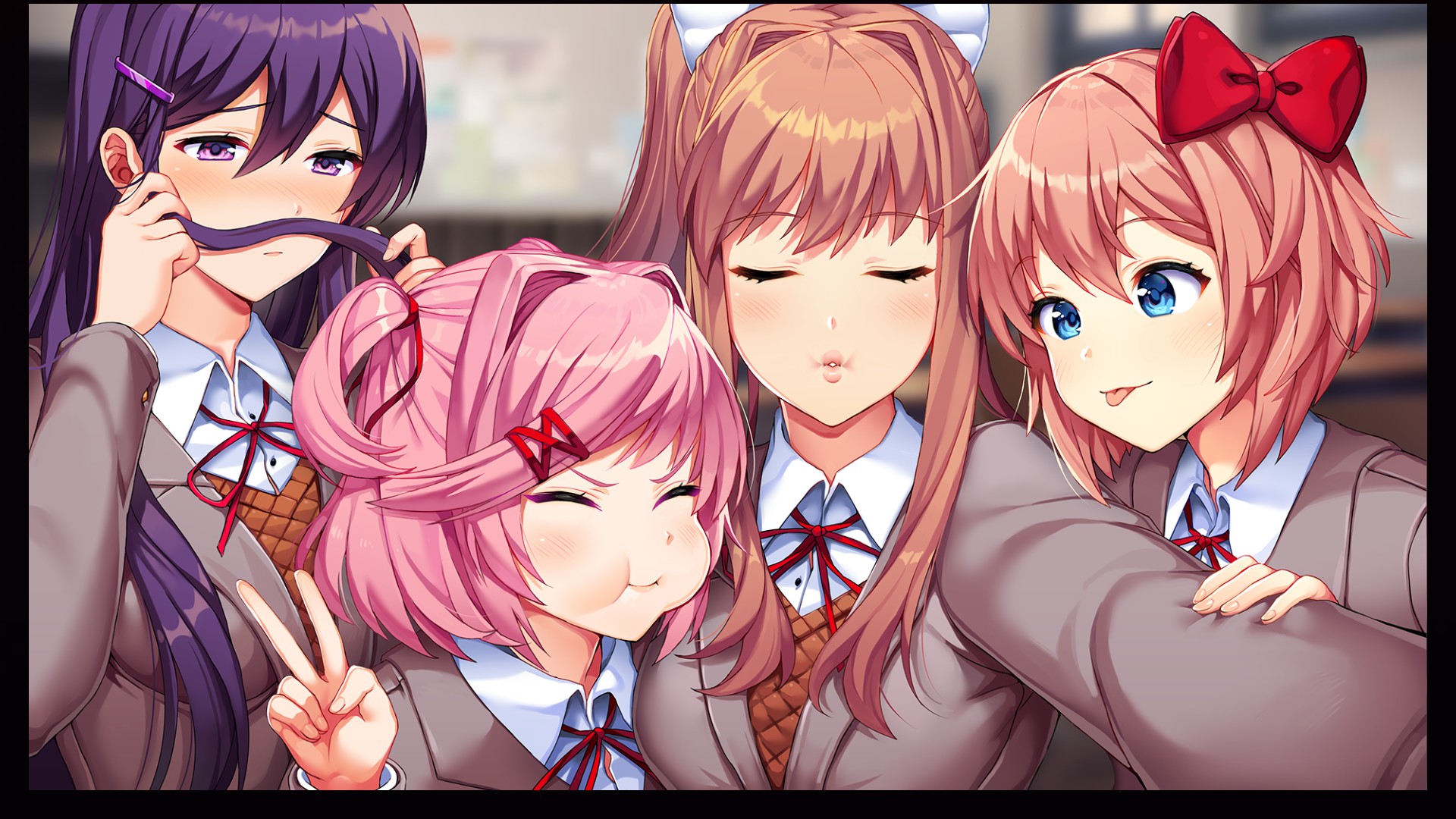 This is all for Doki Doki Literature Club Plus! All Characters Story Informations and Detailed Guide hope you enjoy the post. If you believe we forget or we should update the post please let us know via comment, we will try our best to fix how fast is possible! Have a great day!