Having a bit of trouble understanding this game? Are you getting demolished by zombies, or drones? Are you about to refund this game cause it’s “too hard”? Well DON’T. This game is hard, but with some tips and knowledge I’ve gotten from playing and the discord, you will maybe be able to get somewhere and beat Despot!

How does this game work? 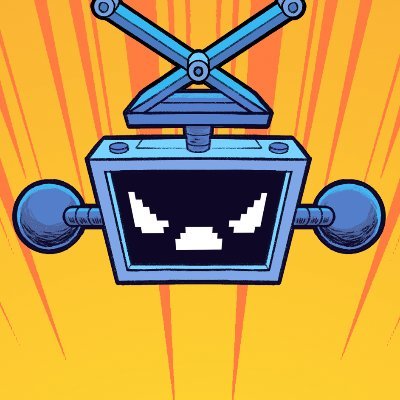 HELLO PUNY HUMAN! ARE YOU HAVING “TROUBLE” BEATING ME DESPOT?! HAHAH YOU’LL NEVER DO IT…HEY WAIT WHAT ARE YOU DOING? HEY STOP THAT!.

Ok, now that I got him out of here…

Despot’s Game is an army builder, rogue-like strategy game, where you build up an army based on items that are given to you in the shop or by in-game events. It can look like a lot to digest at first, but overtime, you’ll learn how to play the game, and how to succeed in KOTH (that’s something for another time) So let’s get into the basic of the game. 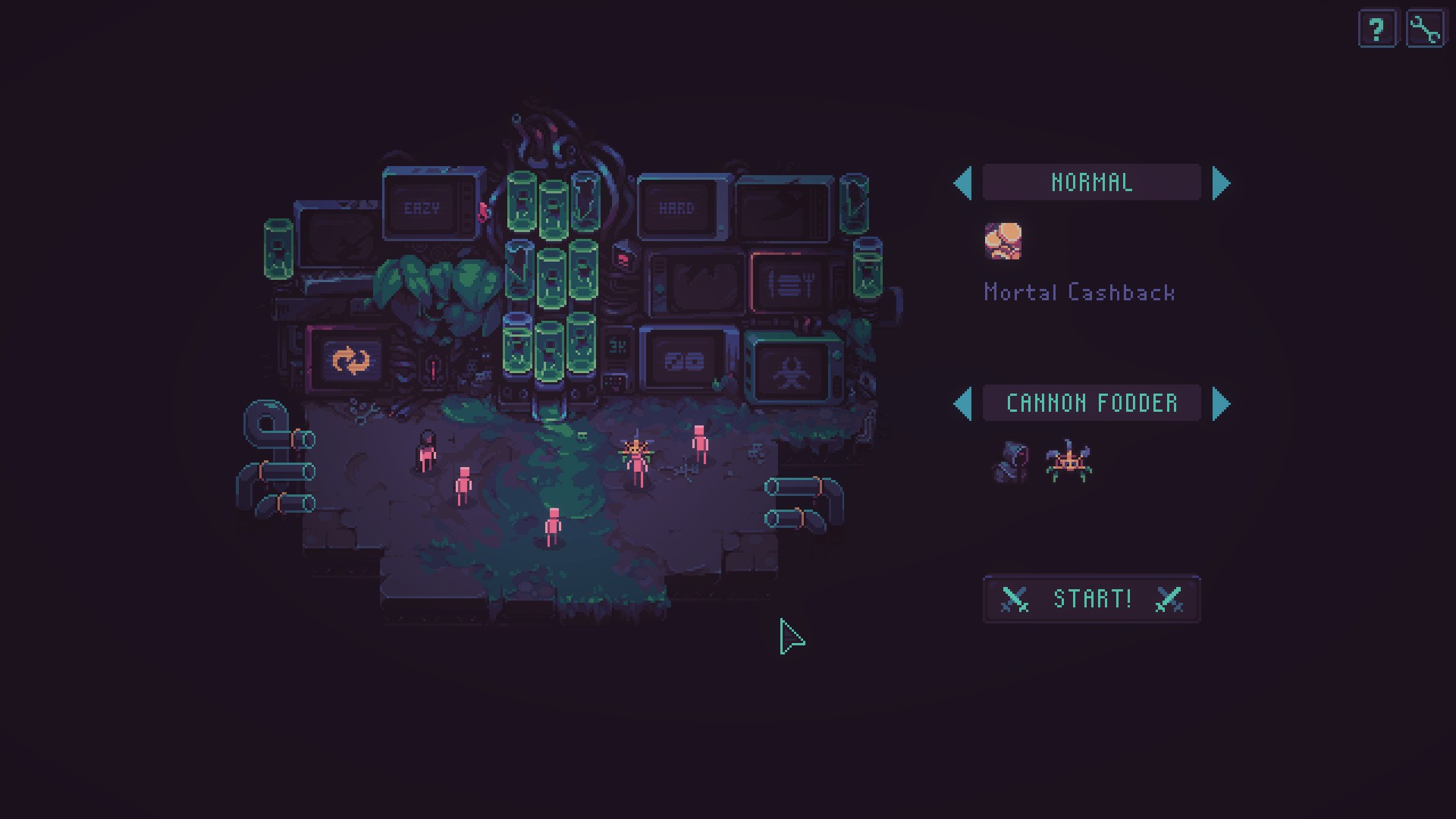 When you first start the game, you will be presented with a couple options.

Difficulty, you can mess with as you please, but playing on “Easy” will disqualify you from playing KOTH, which is something you get to do once you beat the game, so you could play on Easy to get the hang of the game. There are also some other difficulty settings, such as “Hunger Games”, “Mutagen”, and “Crazy”, all have their own special rule set, but I haven’t tried those out.


And then Starter kit. These I would say don’t really help you in the long run, but will help you in the beginning as most of them will die by the third or fourth room if you’re not careful. There are a couple starter kits to choose from, some will be locked until you do the challenge it is asking you to do, such as “Have 4 different Throwers on your team.” There are 8 starter kits.

The ones I would suggest are Cannon Fodder, and Cosplay. Cosplay is really nice since you have a T3 healer right off the bat which is really helpful early game, and Cannon Fodder is fun as you are one cultist off from having their summon which is Cthulhu tenacles. But, these are just some starter tips, feel free to mess around and see which one you like. Like I said, they mostly all die by floor 3, so they’re basically just starter units to help you get along. 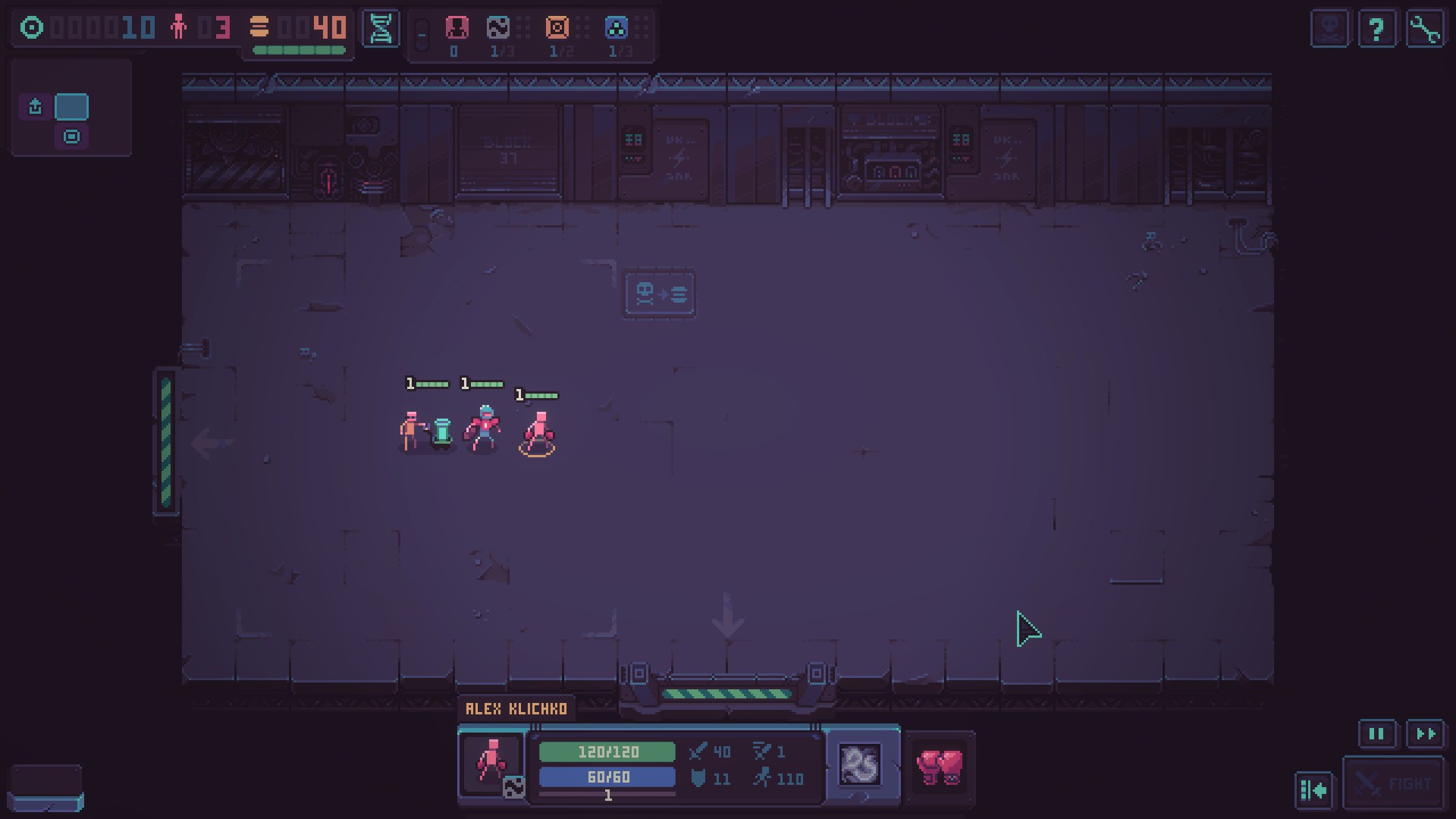 Once you start the game, it will drop you into an empty room with your selected starter kit. Your job is to go through level after level, building up your team and mutations to beat the final boss: Despot. This is a challenging one, but you’ll get there.

So there’s a few things on the screenshot above to be explained. You have the little target with the “10” after it; that is your currency, or “tokens” as the game calls it. You will be using these for EVERYTHING. Buyable mutations, newbies, clas items, even some events will have you using your tokens for something. Every floor you beat, you gain more tokens.


Each floor has a couple shops, one floor specific event (shown on the map as !?), mulitple places to buy food, and a mutation altar (those can be upgraded via a buyable mutation).


The second icon is the amount of people you have in your party. So I have 3 in that screenshot, and because of that, every room you go through, even if you backtrack, will take…FOOD. Yes, you have to feed your party members every room with food, which brings us to the 3rd icon.


You start with 40 food, but that can slowly dwindle to 0. Don’t worry, if you hit 0, you’re not instantly dead, you just incur some penalties in the form of minus armor, and damage. These penalties can make or break a run, so you wanna have some food on you, unless you are running the perk “Hungering Fury” which when your party is hungry/starving, all units will receive a +40/60% attack speed. At first, you wouldn’t think this is such a great perk to those negatives you get, and you’d be wrong. It’s an actually really great perk, but even with it, you need food. If the bar next to your food goes all the way out, you will need to get food before you can leave the room, and in some cases you will need to sacrifice party members for food. This is possible due to each room having a spot where you can throw humans in for 5 food. Sometimes it can be a little cheaper to buy humans at the item shop and sacrificing them for food, that is if you’re in a bind.


There are 11 floors, 2 or 3 of these 11 floors have some party crushing units, such as hordes of zombies, giant plague walker thingys, and DRONES. These will ♥♥♥♥ up your party if they’re not strong enough. If you die to these enemies, rethink your strat. They are 100% possible to beat, just challenging.


The last thing I wanna quickly cover is team formation. I haven’t found this to be particularly important, as even if you put healers in the back, they’ll still run out and be in the front lines, but if you wanna know a quick and easy setup, here you go.

Now we get into the meat and potatoes of this game: The classes. They are currently 10 classes in the game, who knows if more will be added by full release or not. 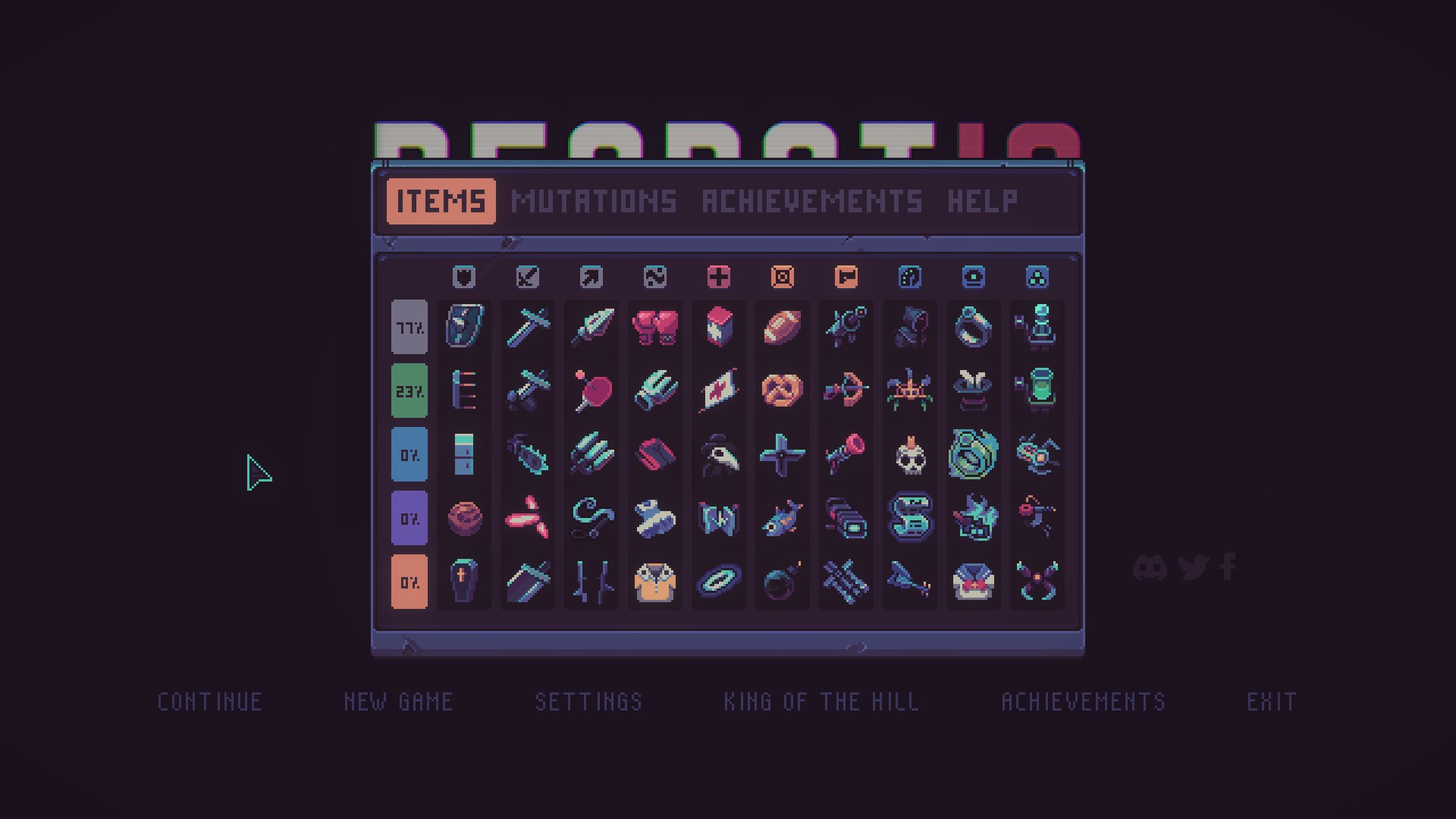 List goes from left to right on the screenshot, just so you know what the class images look like.

Each class has their own special ability that is activated when you have 3 different units of the same class. 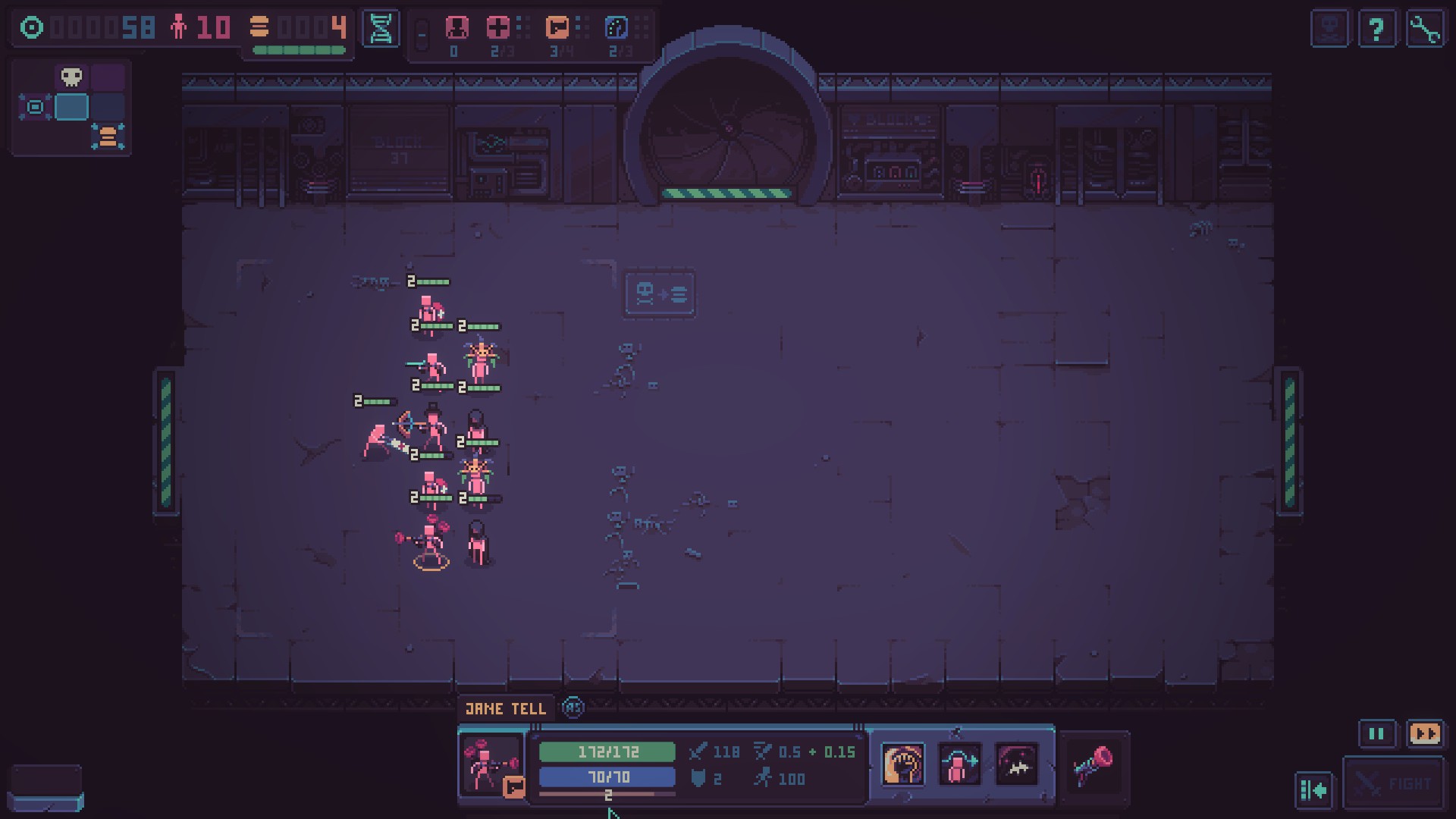 In this screenshot, for example, I have 2 healers, 3 shooters, and 2 cultists as you can see at the top left of the screenshot. With 3 shooters on my team, I’m getting an attack speed buff, and with 2 healers, they work together and heal. I’m guessing with 5 different healers you just heal better, as the skill just says “healing”.


So with that example, here is what the classes do if you have more than 2 or 3 different units of the same class 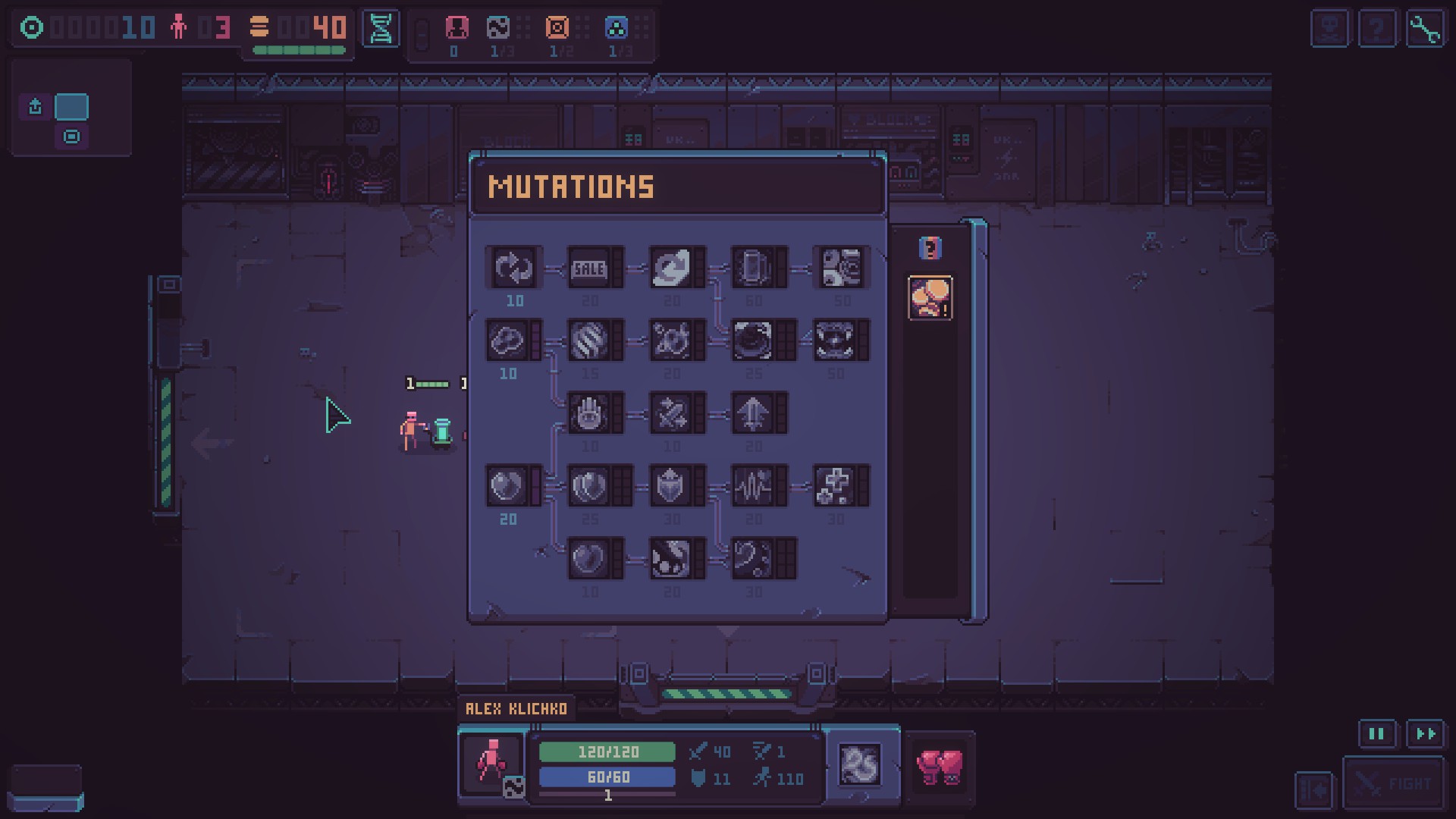 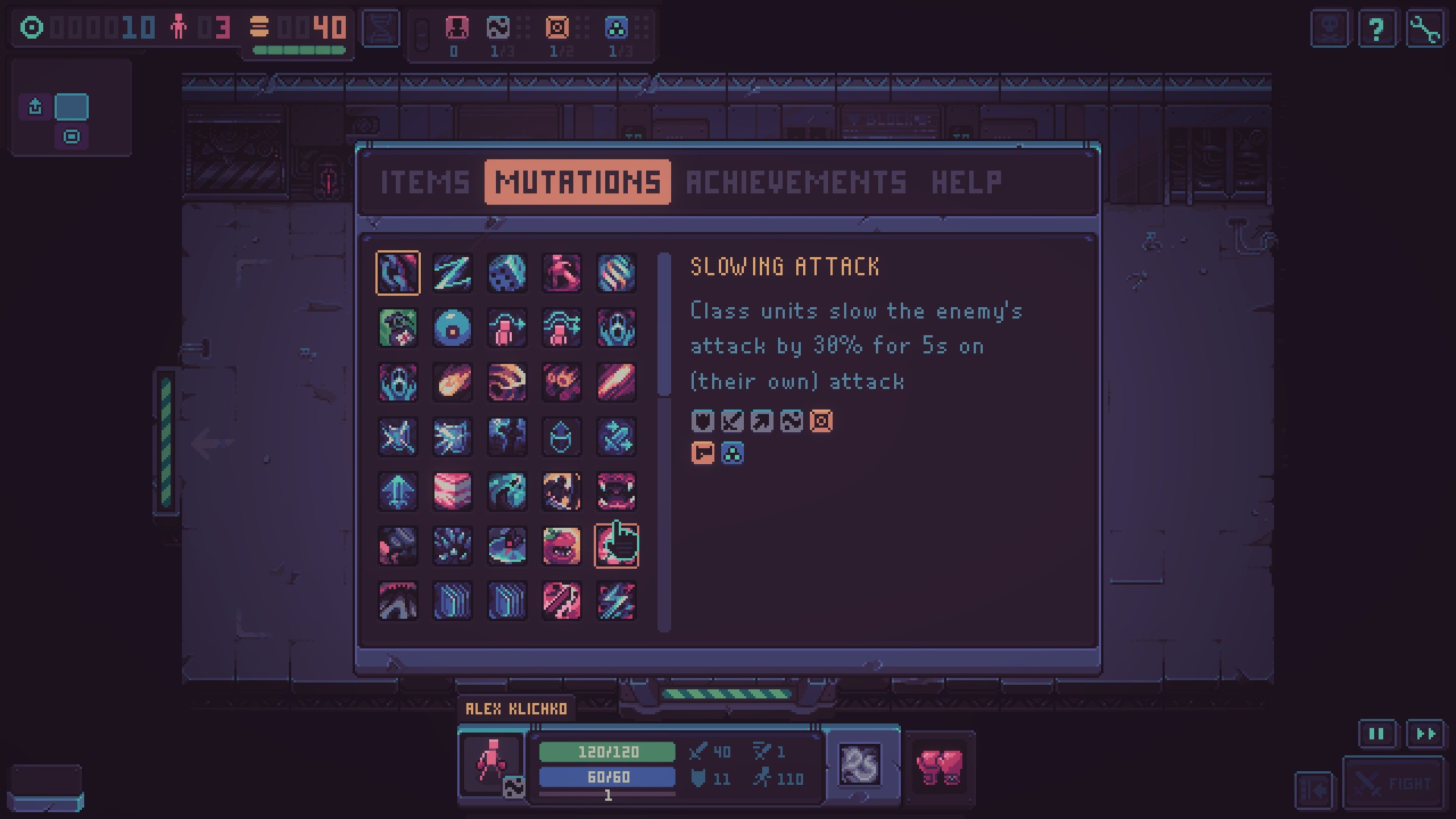 There are two types of mutations in this game. The ones you can openly buy whenever you want, which are upgrades like:

And then you have upgrades that you only get via mutation rooms on each floor. You can upgrade the amount of mutations that spawn on each floor, it’s a pricey upgrade, but a worth while one for sure. These mutations are, for example:

There’s so many I could make a whole guide on that! But, I won’t as it’s all information in the game, so be that you have them unlocked. A lot of these mutations will be locked, and you unlocked them by just playing the game, and getting farther.


The upgrades I really like, are for the shooters, fencers, and for everyone.

-Shooters have two busted (In my opinion) mutations; Rubber Bullets, and Penetrating Shots. If you’re gonna run Shooters, always pick those up

-Fencers have a perk that allows them to spin their sword and act like a Bey-Blade, very overpowered, and with a new bought mutation, called “Energy Vamp” it makes them even more broken. (Spec for a lot of health with the fencers and this perk)


I also like the summon perks, where you can have a zombie, drone, or tomato join your party. Those scale with the summon perks in the buyable mutations tree. Cultists’ tentacles and MegaNewbies also scale with summon perks as they are considered summons. There are also some perks you can get from events at the start of each level. I’ll direct you to this other guide on Steam, as there’s so many events and the way they go that it would be a whole nother guide. 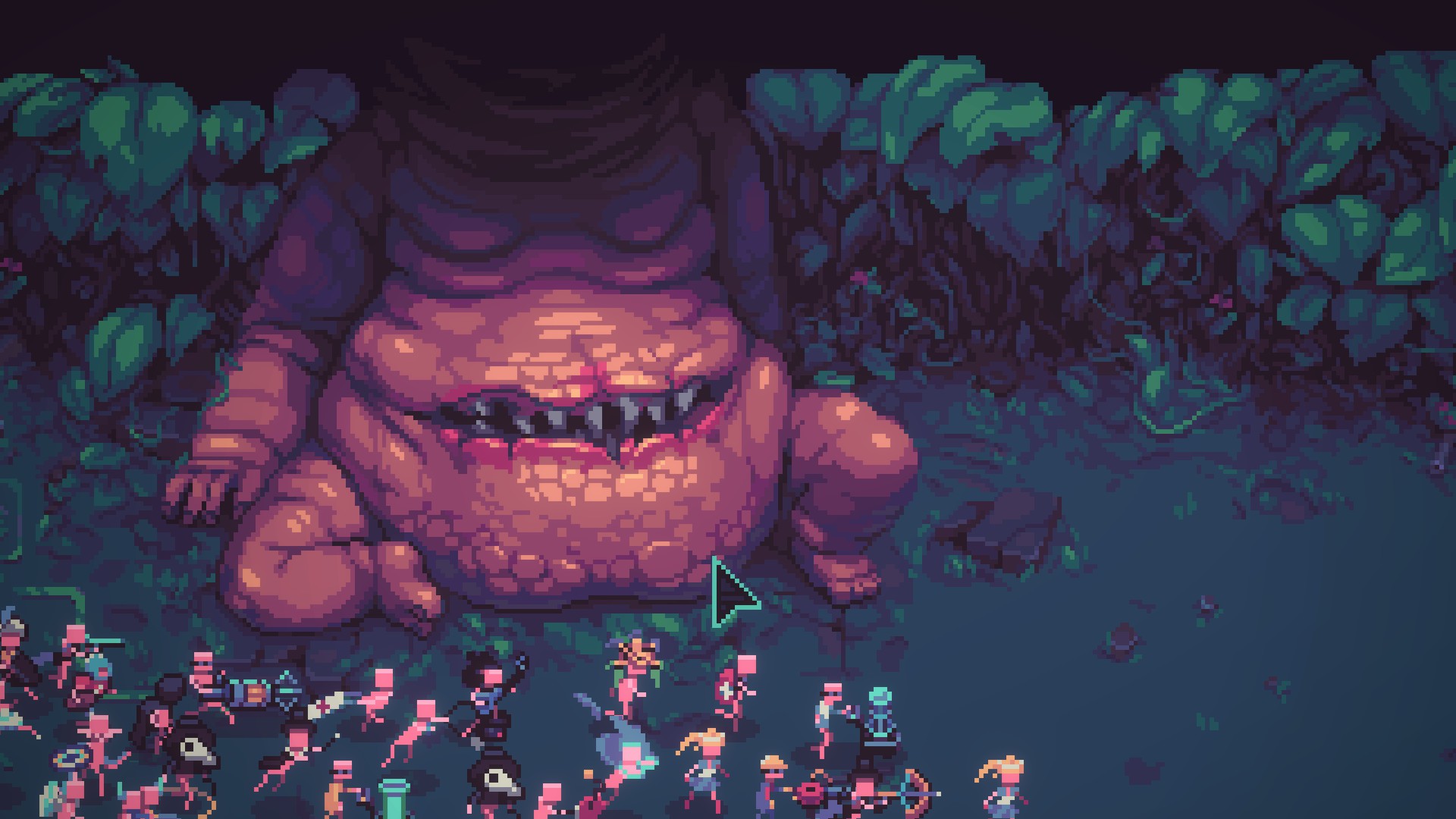 -Try to upgrade your shop whenever you can. The higher the level your shop is, the likely-hood of getting a T5 item is greater. And T5 items are the items in the game that are the most broken in turn.

-Go for the extra mutagen/mutation altar in every room, as quick as possible. It may be tricky, but I aim to get that upgrade by Floor 3-4. But, if that’s too hard for you, just aim to get it as soon as you can. Having more than one perk to grab on each floor is really helpful, and the perks you have to get to get to the extra mutation are also very helpful. (one item is discounted, re-rolling is one token cheaper, and you can re-roll the mutation altar one more time, for a total of 3 re-rolls)

-Doing all the rooms on a floor is very helpful, as you get more tokens, but in turn you will be wasting a lot of food. Always utilize the teleporters as they can help you save on food, but also having the perk “Hungering Fury” can also help diminish the negatives to not having food all the time.

-Try to keep your party composition to 2-3 different types of classes. I’ve found that having 4 of the different class types can be overwhelming, and not as good for your team. Find the classes you really like, and try to build a team with 2-3 of them. That’s just what I’ve found in my 40 hours of playing.

So….you’ve made it to KOTH 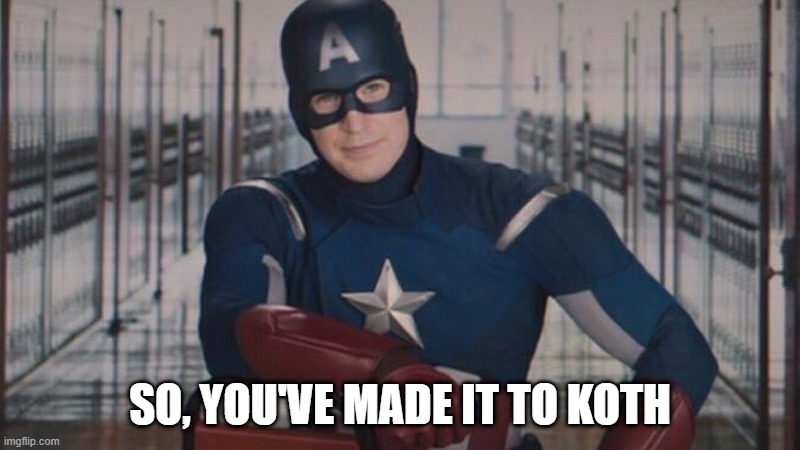 So, you’ve beat the game, and now have been introduced to KOTH. Well, this is where the game, in my opinion gets going. KOTH, or King of the Hill, is an asymmetrical online gamemode where your party that just beat Despot, goes against other team that ALSO beat Despot. You thought your party was so broken that it beat the boss? HAH, that’s funny, here comes a team of all mages and healers to ♥♥♥♥ your ♥♥♥♥ up. KOTH will change how you view team comps in this game FOREVER. It’s nutty. KOTH is divided into 3 leagues; Greenhorn, Amateur, and Grandmasters. Each season you have the chance to go up a league, or down one. Welcome to the wild west, partner. Here’s some little notes that I took during some of my KOTH matches. They can be range from being worthless, to possibly useful: 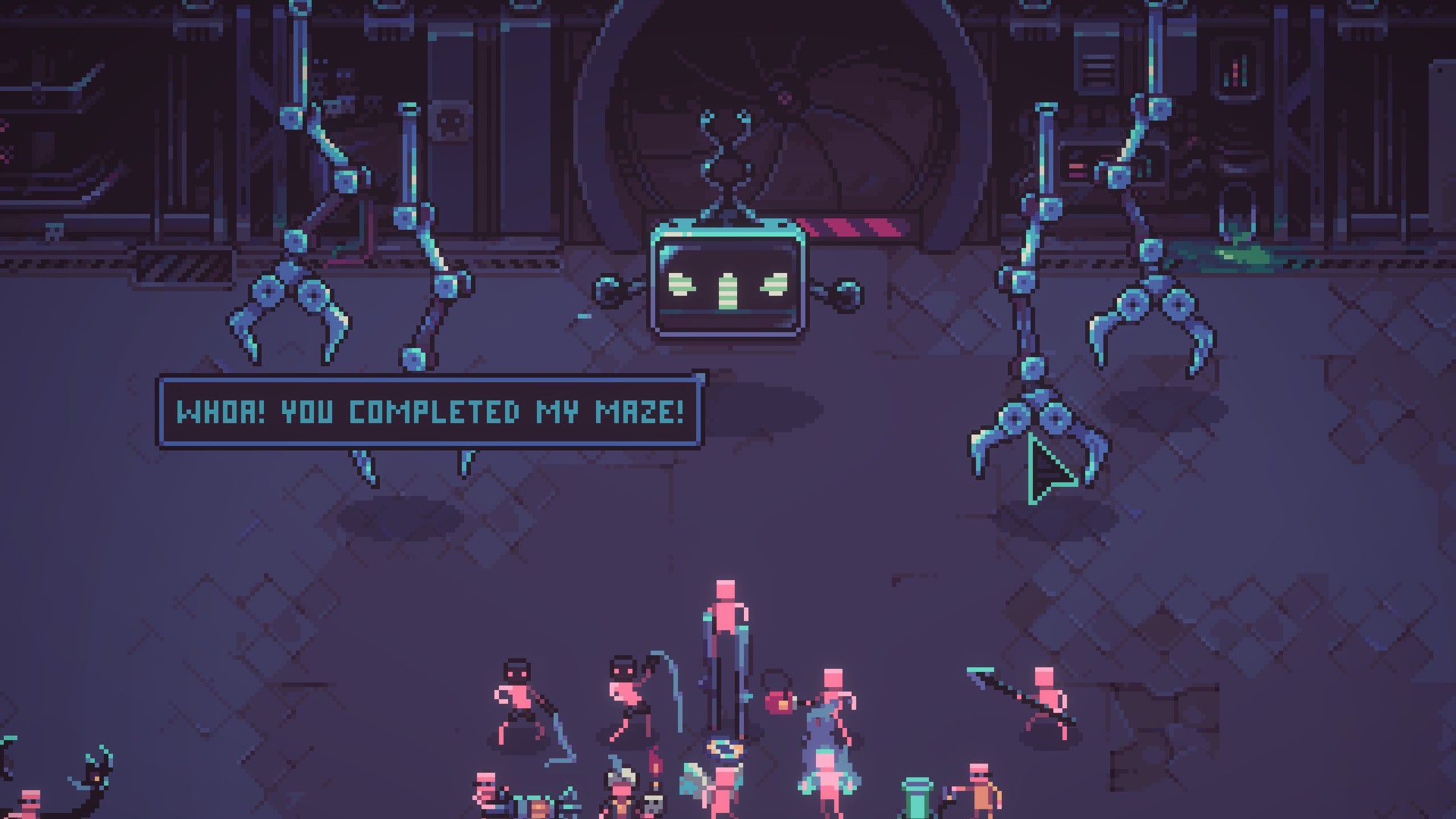 I feel like I covered everything, so I thank you for reading to this part. If you have any questions, or see that I missed out on covering something in the game, please comment below. I’m playing this game practically everyday, it’s a lot of fun just experimenting and finding out what works and what doesn’t. In the end though, just experiment. Find out what YOU like, and what YOU don’t like. These are just some little things to hopefully get you going, and succeeding in the game. Well, if you’ll excuse me, I have to go perfect my cultist build. Maybe I’ll see you in KOTH someday 😉 If you feel like you need MORE tips, go join the Despot’s Game discord: https://discord.com/invite/Qa4HxzZfTX – [discord.com]


A lot of fun is to be had there, and you get to see some crazy a*s builds some people have. Thank you all again for reading this! Have a great time playing Despot!

Hope you enjoy the post for Despot’s Game: Dystopian Army Builder Gameplay Basics + Tactics & Walkthrough, If you think we should update the post or something is wrong please let us know via comment and we will fix it how fast as possible! Thank you and have a great day!