Coloring Pixels is a great game. But you need to remember that it’s a puzzle game (albeit a very casual one), rather than simply “an electronic colouring book that doesn’t let you pick your own colours.”

The purpose of this guide is to help you minimise frustration and maximise enjoyment from playing, describing strategies I have tested myself.


The images used in this guide are of “Milkshake” from Book 1. The font option is Tahoma.

A Load of Options

On the screen listing the images in your current book, in the bottom left, you will see the button with a cog on it. It takes you to the options screen. The important ones can be divided into 2 categories – visibility and control.

Now you see it, now you don’t

Highlight pixels with a pulsating outline. To make sure this isn’t cheaty, there are only 2 options:


“Last 10 of image” highlights the last 10 pixels of the image. I haven’t found a use for this yet.


“Last 5 of Color” is a Lot more useful. It takes a Ton of frustration out of hunting for those last few pixels, which may be scattered all over the image. It even works for misclicked pixels, or colours with 5 or fewer pixels in total. See below: 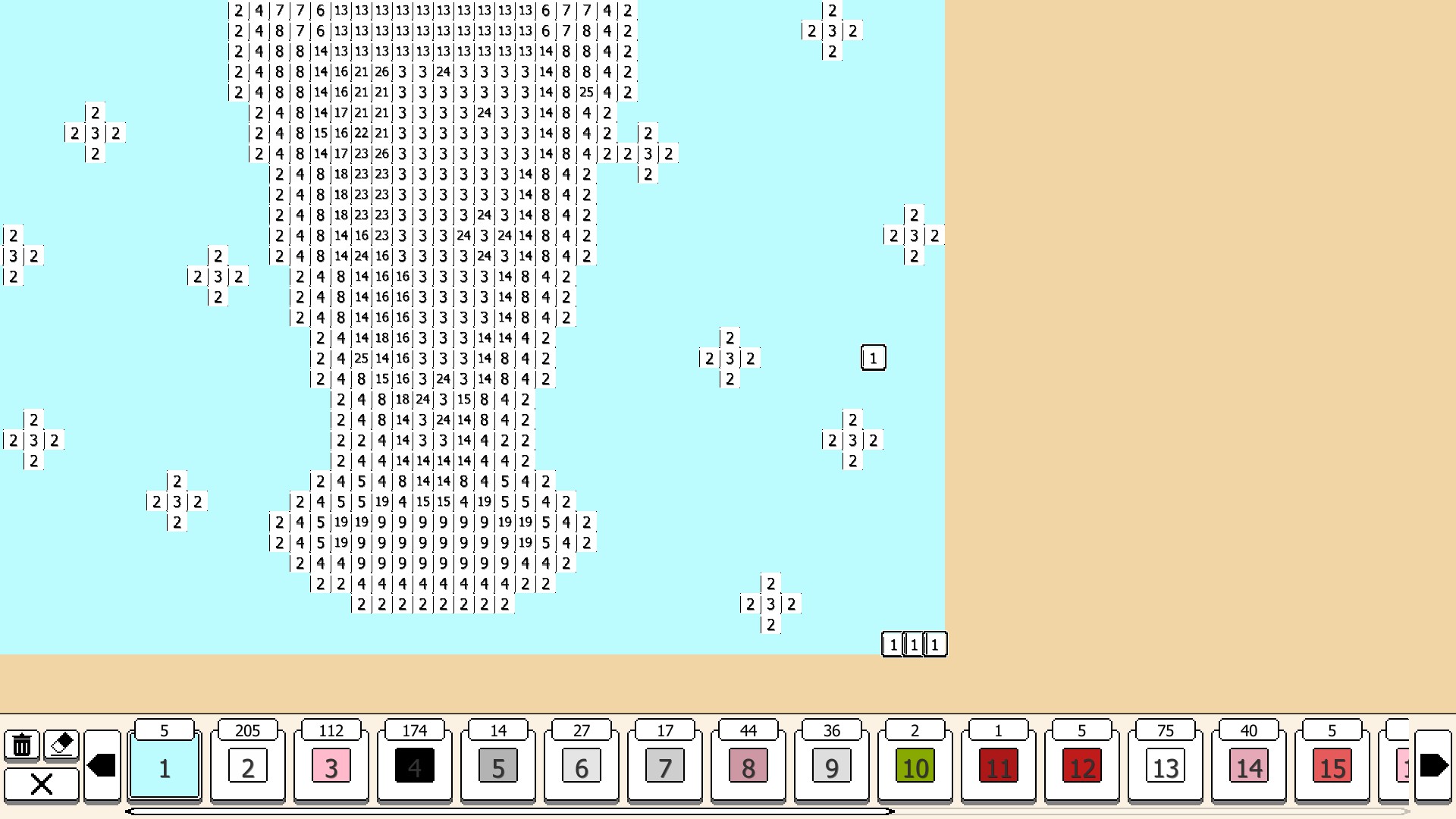 You can choose either option, or both, to minimise glare from your computer screen.


“UI” dims the screen and makes the background behind the image dark.


“Pixel”turns the pixels themselves dark, with lighter numbers on them.


Here’s what things look like with both options enabled: 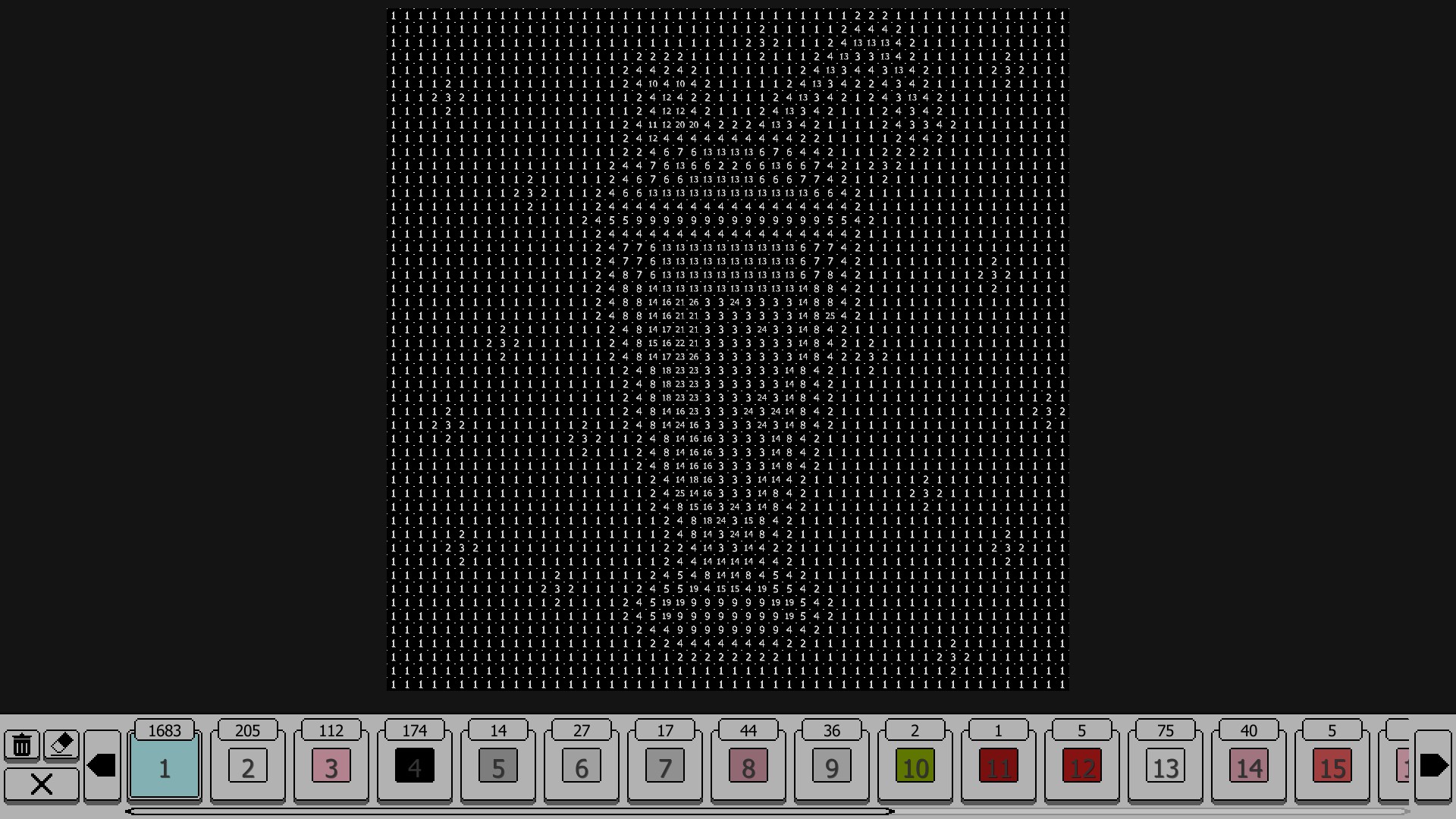 “Silkscreen” is the default. Other options are “Tahoma” and “Open Dyslexic”, both easier to see for different reasons.


“Tahoma” is the one used in all the screenshots in this guide.

You can choose “Touch Only”, “Cursor Only”, or both. I haven’t tested this too extensively, but it works similarly to the magnifier in Windows. There is a slider to adjust magnification too, up to 10 times.

I don’t quite understand what this is for, but it turns Already Completed colours of the image grayscale. Like this: 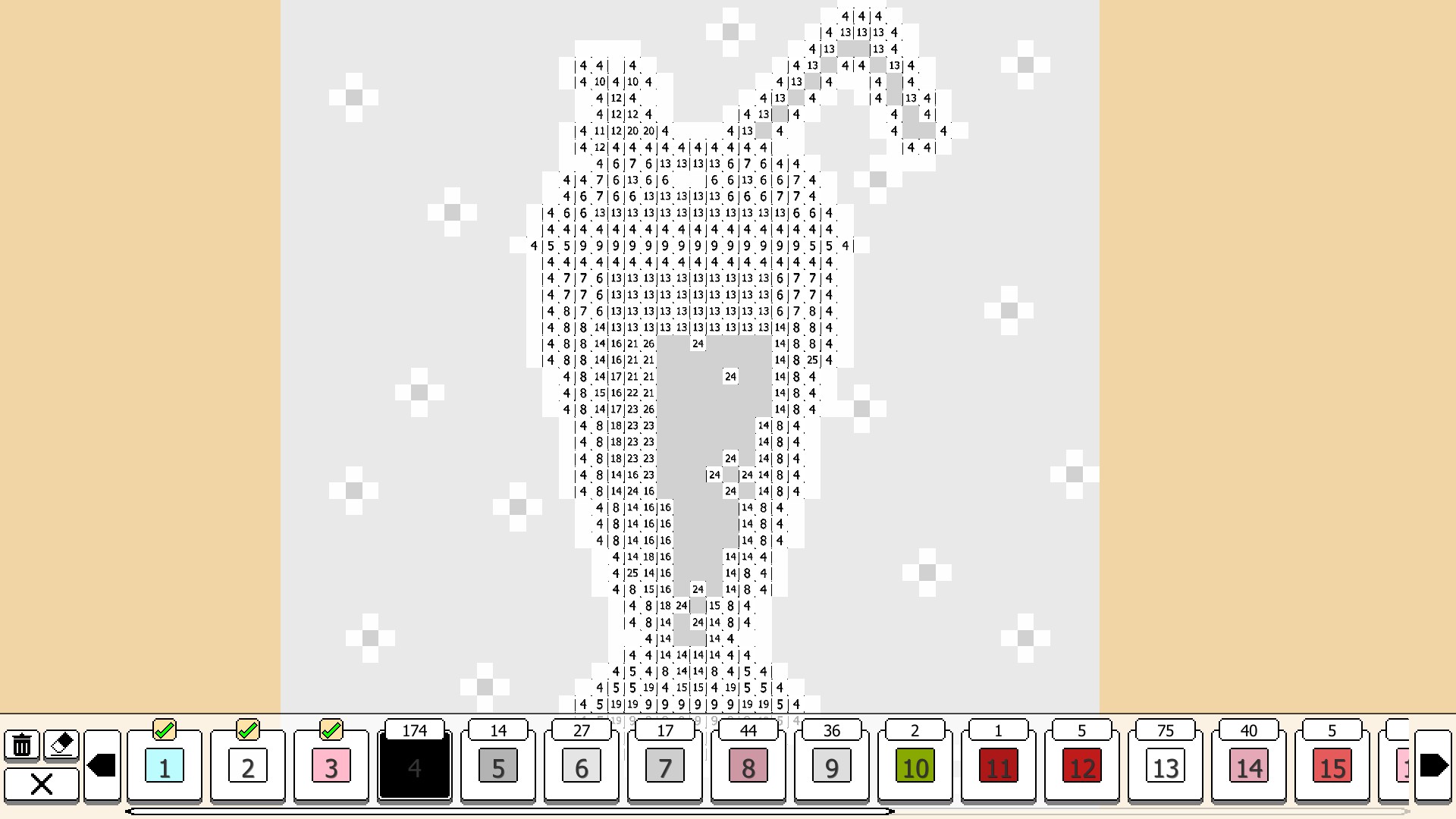 The default is 1.0. Can be anything from 0.5 to 10.0. Multiple playtests have shown that Slower speed is actually Better, improving responsiveness and reducing motion blur on the numbers, but it’s largely down to personal preference.

The default scale is 1.0. This slider allows the lucky individuals with bigger monitors to scale the UI down. You can make it as small as 0.5. Click “Apply” to preview.

“Completed Pixels” makes it impossible to misclick once a pixel has been coloured correctly.


“Completed Colors” does the same, but only for colours you’ve completed entirely.

Does what it says on the tin! If you misclick, the colour you need reappears. Like this: 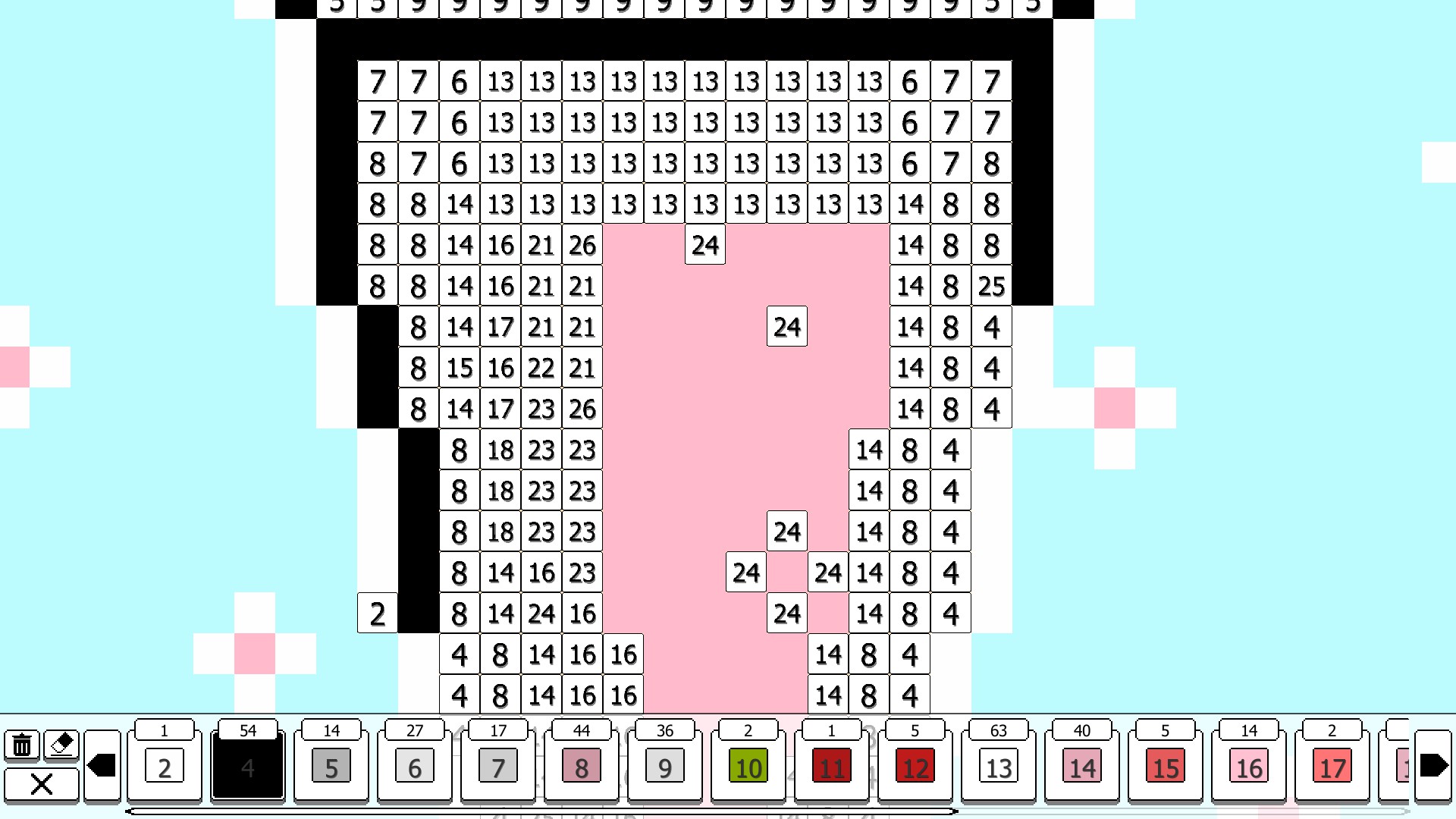 You can select either option, or both.


“Pixels” is my favourite option, by far! It turns your misclicked pixels white. So, it functions as misclick protection for the pixels you haven’t coloured yet, making it easier to use the “line method” and the “box method” strategies described below. For pixels you’ve already coloured-in correctly, it makes any misclicks immediately obvious. The number 2 in the image above would have been black otherwise.


“Palette”turns the colour you select on the palette white. This makes seeing its number easier, particularly for darker colours. On the other hand, seeing a White colour on your palette turn a pixel, let’s say, black, feels weird. So decide for yourself whether or not the drawback outweighs the advantage. Below, the left-hand image has the option turned off, the right-hand one has it enabled: 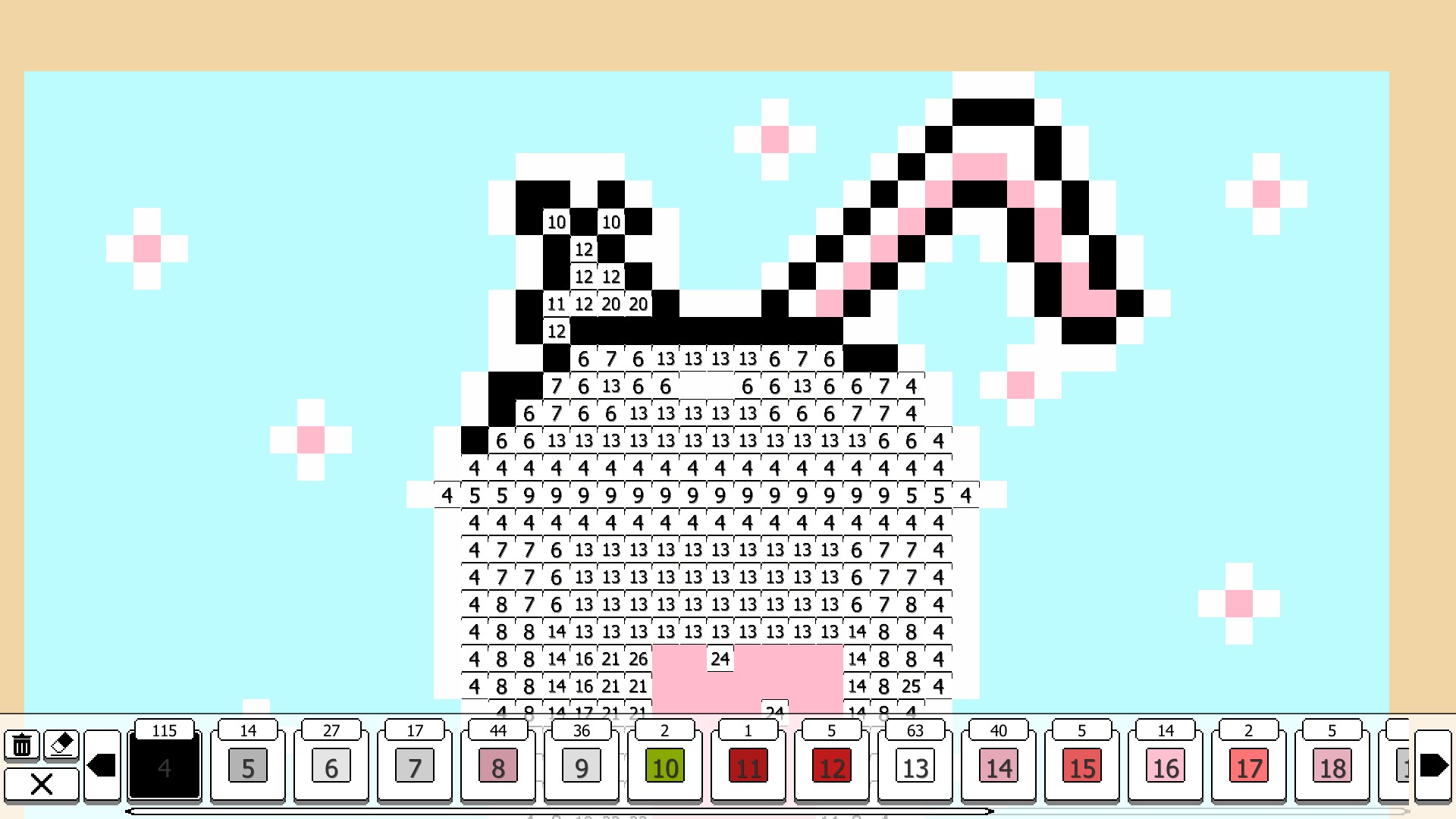 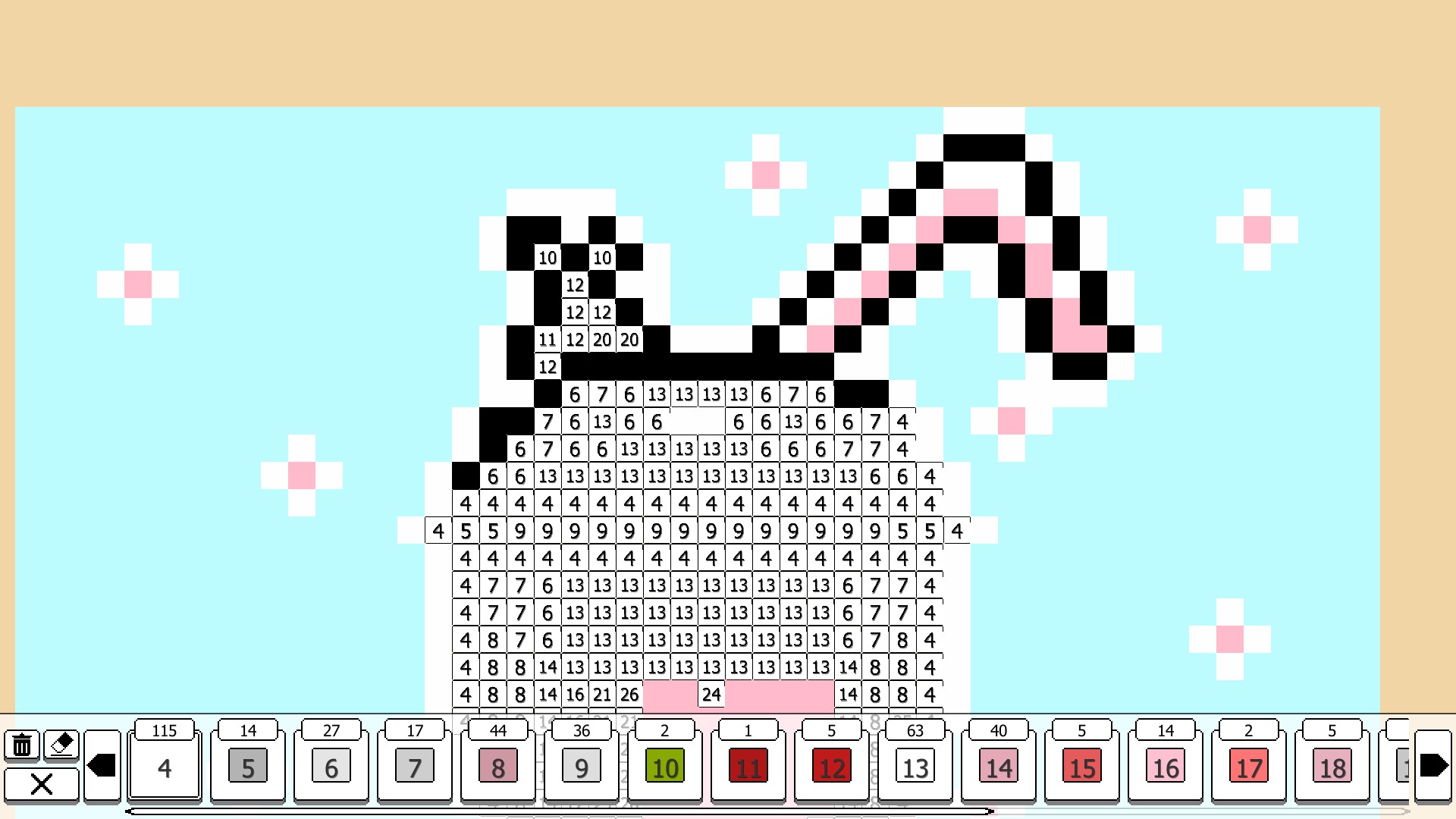 There are a couple strategies to enable you to colour large areas more efficiently. There are a lot of 1s in the image below – 1683 in fact, as can be seen from the number above the corresponding colour on the palette: 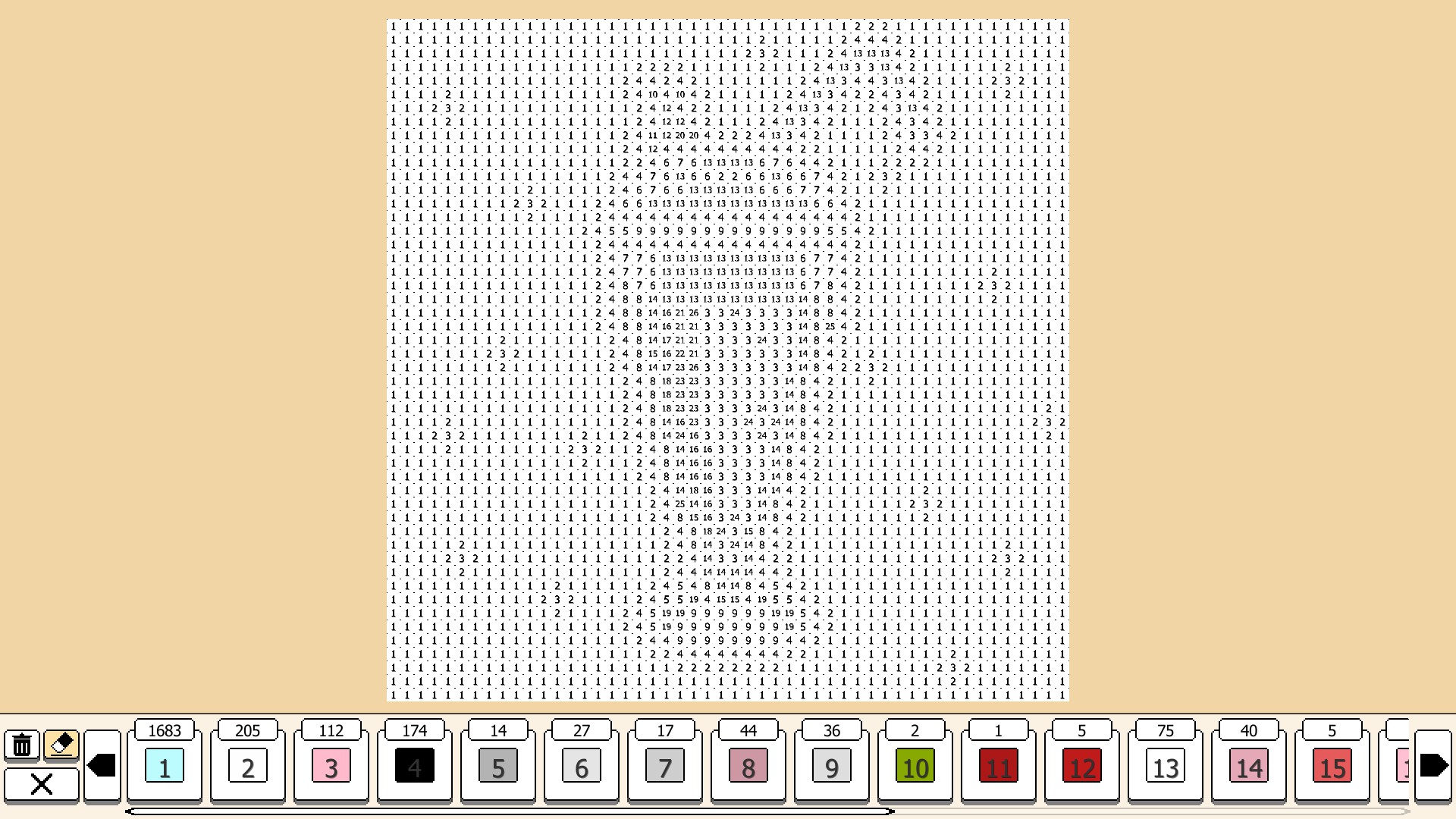 The first method is what I call the “Line Method”. 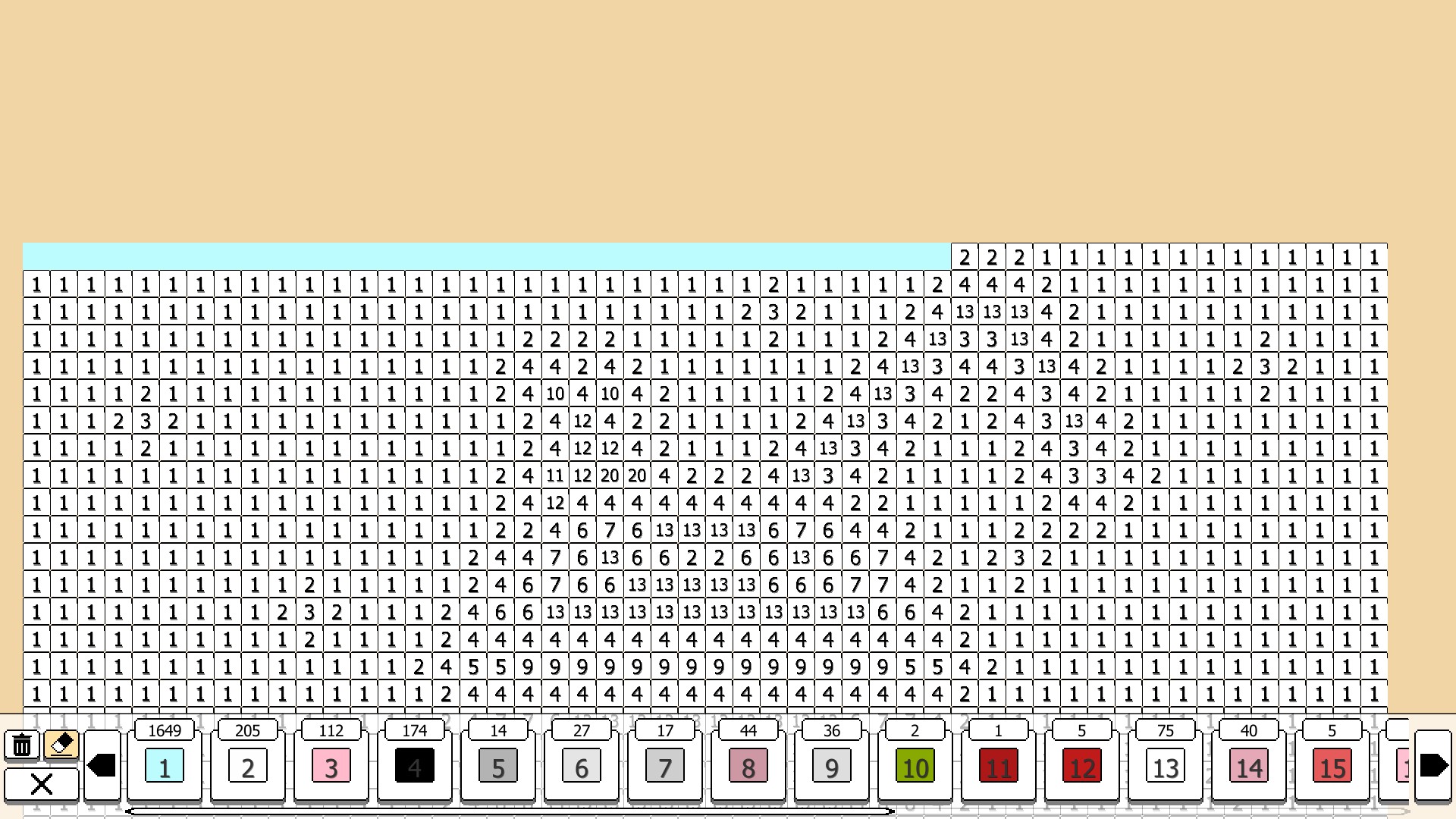 Step 1: Choose colour number 1. Starting from the 1 at the top left corner of the image, click and drag, either down or to the right, until you get to a different number, in this case a 2. 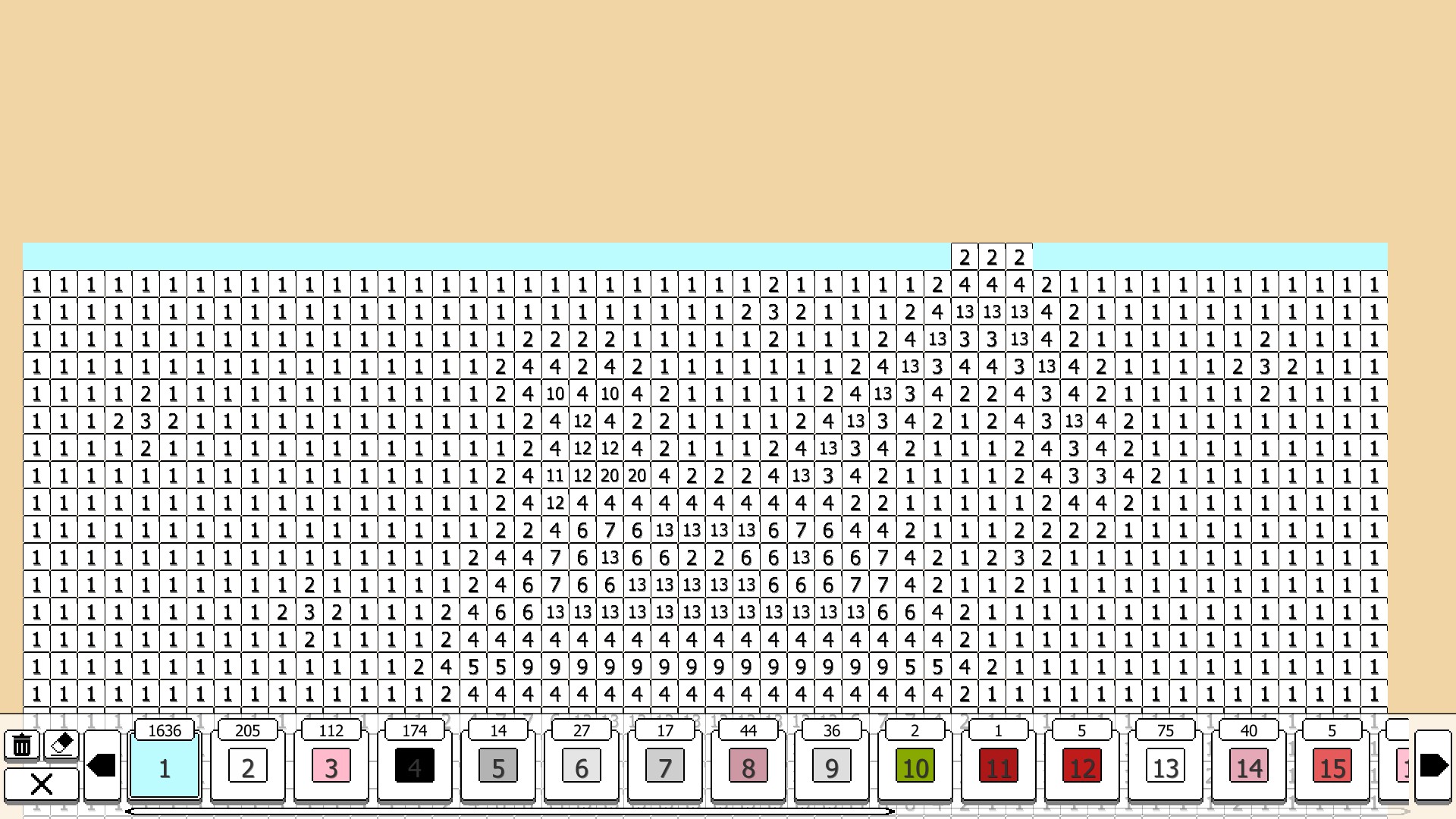 Step 2: Skip the 2s and repeat with other 1s on the line. 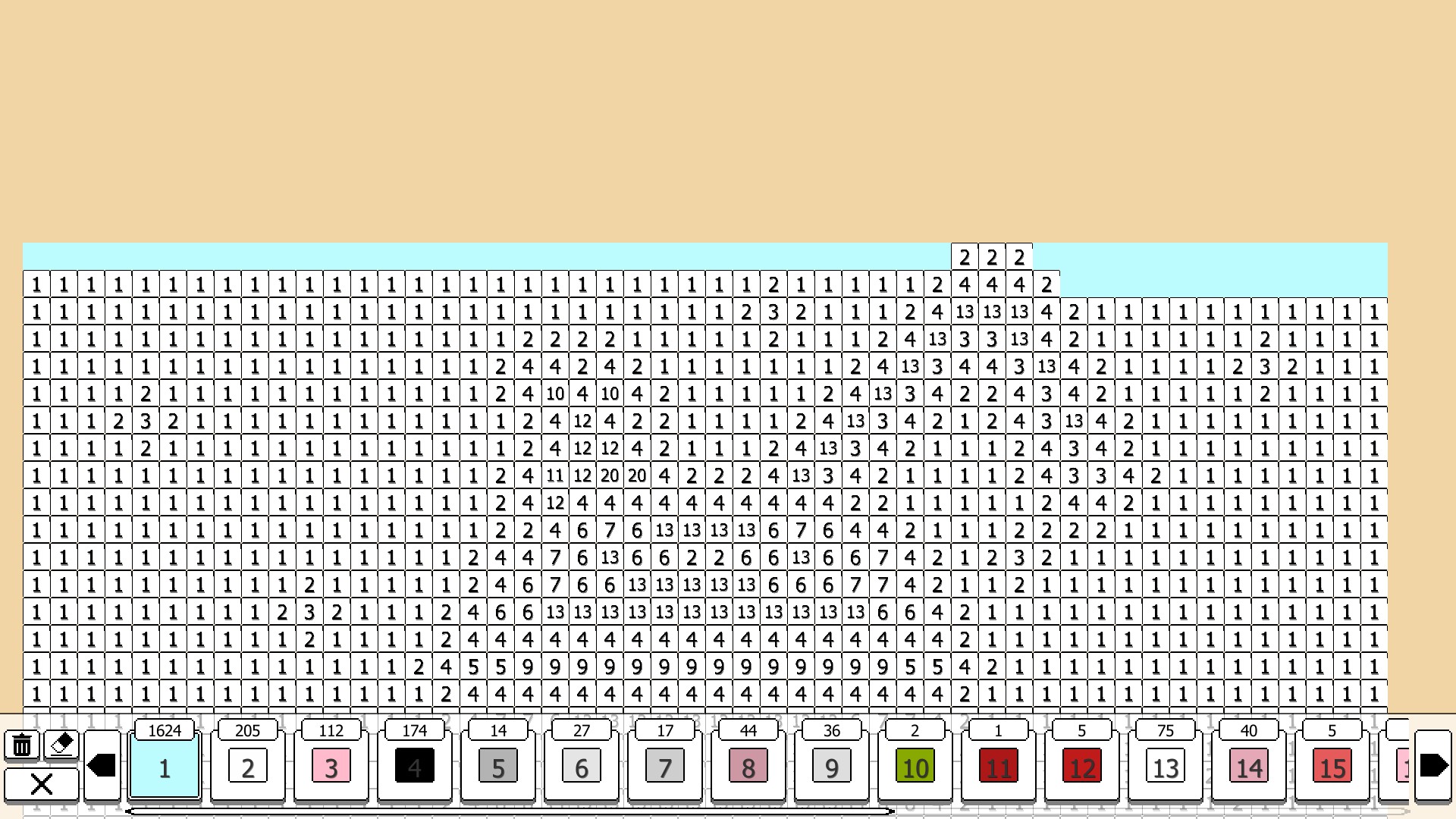 Step 3: Move to the next line and repeat both steps, this time in the Opposite direction, to minimise panning.


Bonus tip: On very wide or very tall images, it’s often easier to click and hold while panning the image, instead of clicking and dragging.

The second method is what I call the “Box Method”. I use it for particularly large areas of the same number. 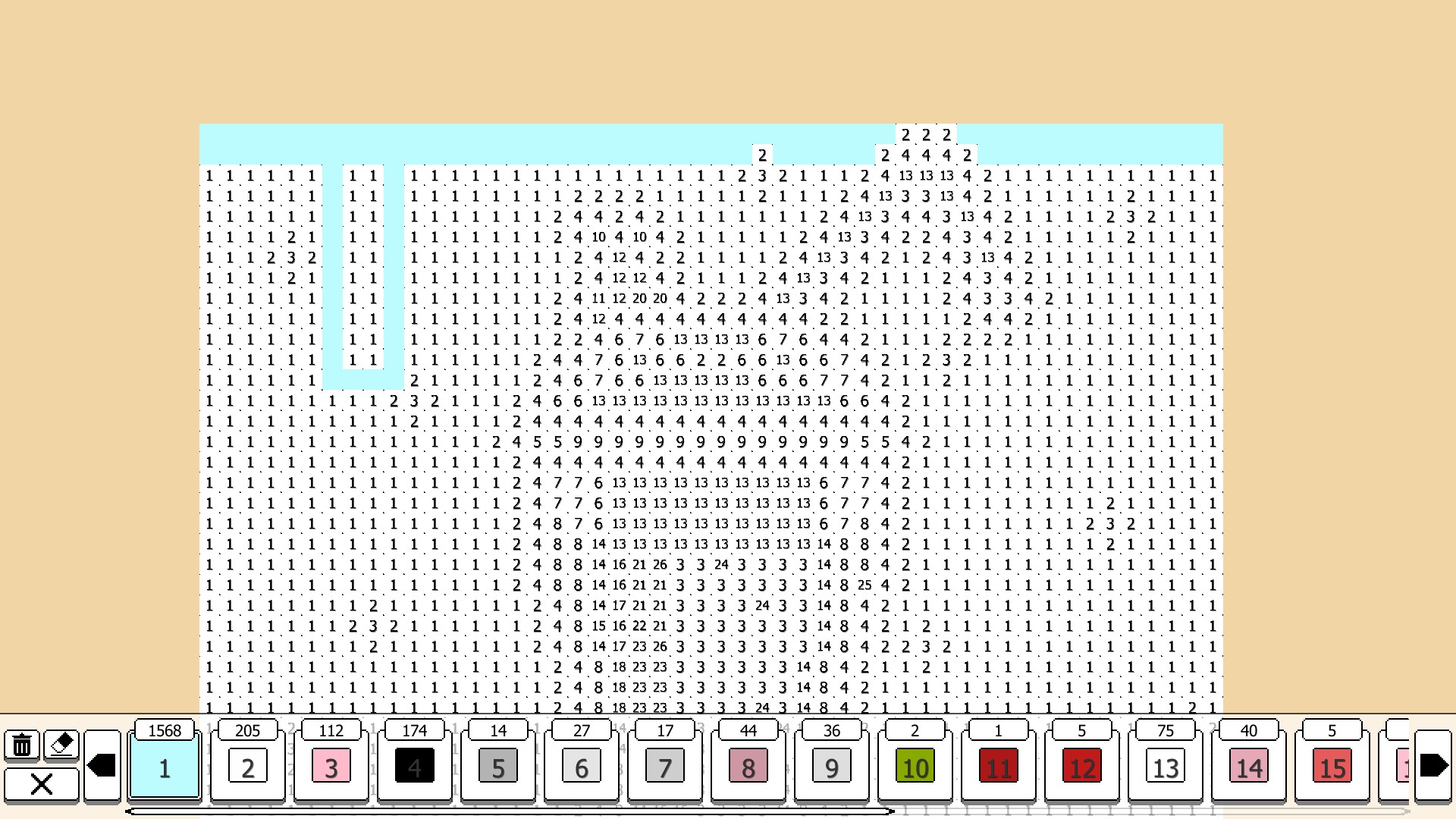 Step 1: Pick a rectangular or square area of the image where all the pixels have the same number, Imagine a box around it. Draw the outline of your box. Other numbers bordering it (such as that 2 to the left) will tell you where the boundaries are. 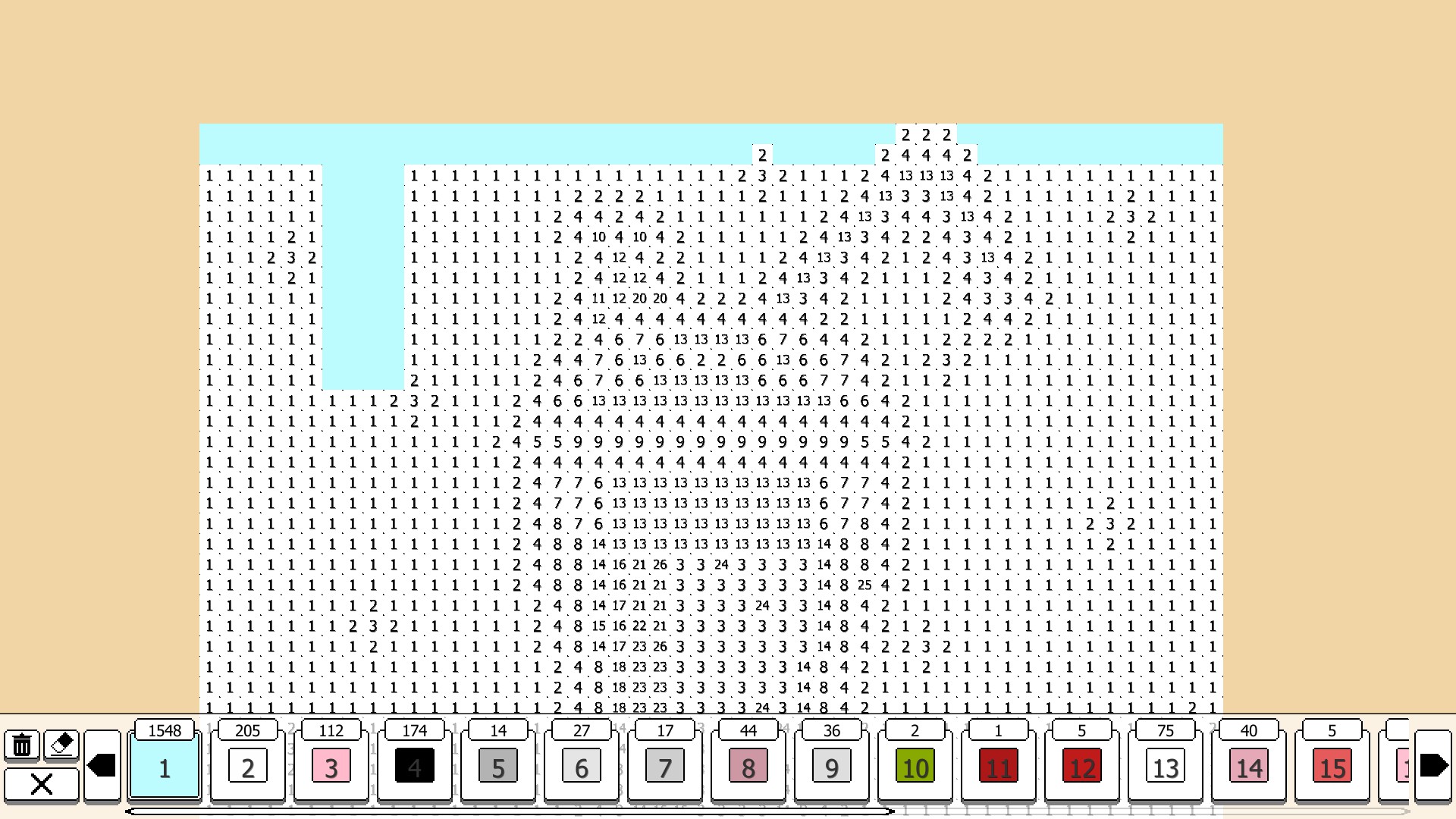 Step 2: Fill in that outline. You can imagine your cursor is a pencil and be very freehand with this. 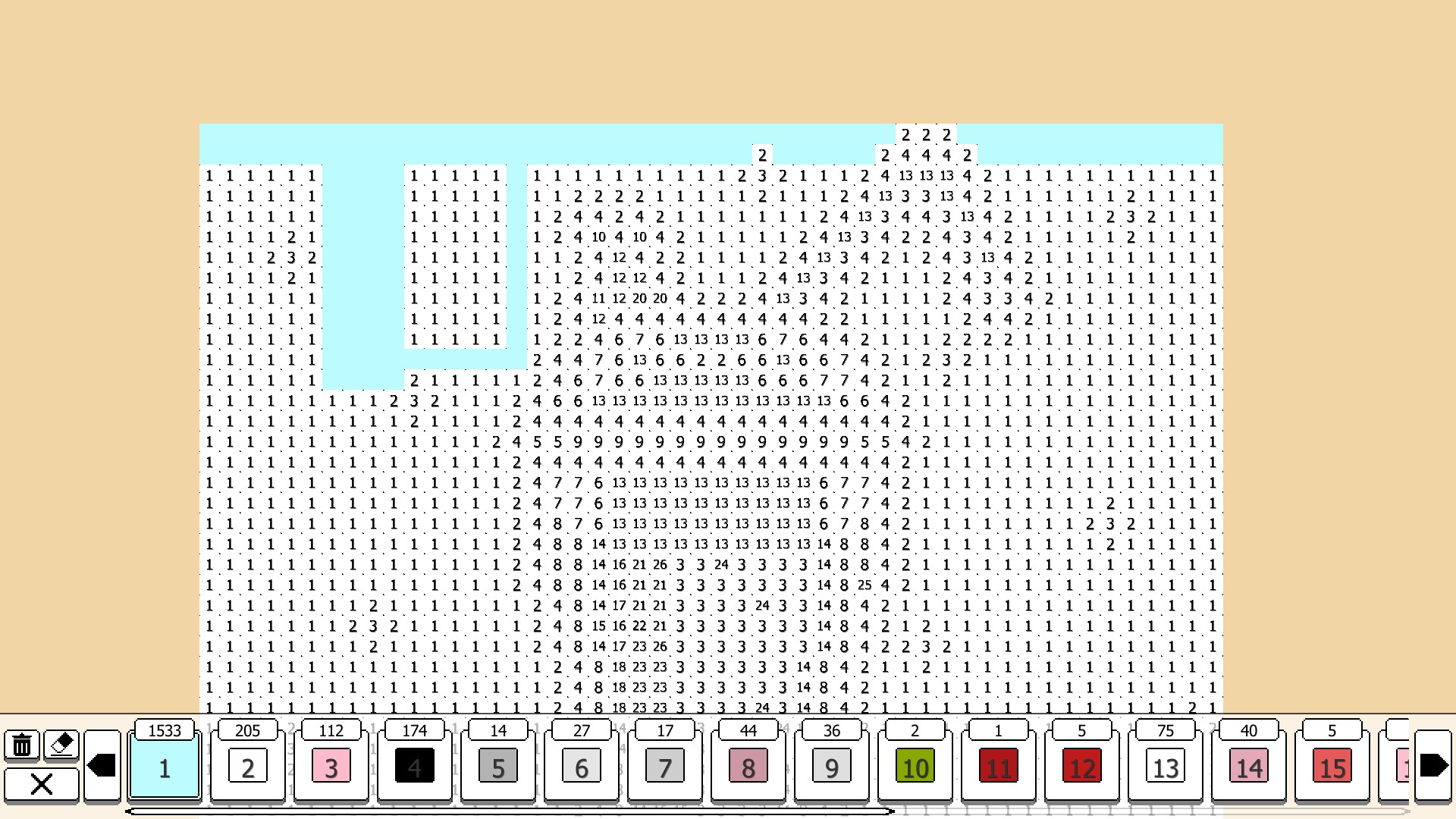 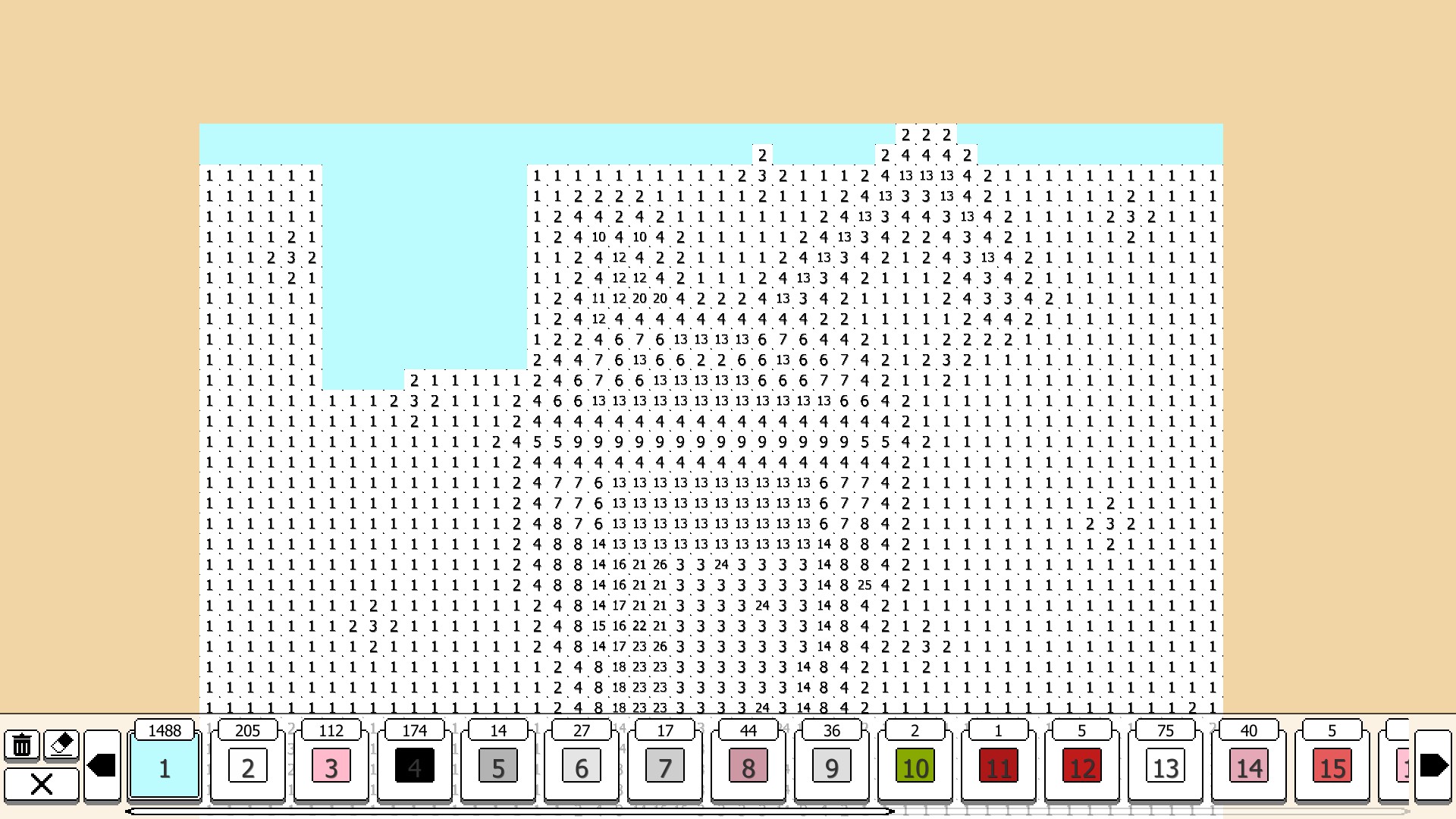 You can then draw another box somewhere else (even adjacent, as demonstrated here) and repeat as many times as needed.


Bonus tip: If you have “High Contrast Pixels” option enabled, you can simply ignore other (unfilled) numbers in your path, as the misclicked pixels will remain white! This is especially useful for quickly doing the most common colour in an unfilled area.


This option is also great for areas where single pixels are arranged in a “chessboard” pattern. In this case, first fill out the colour that matches the background, then do the rest.

The final method is the “Hyper-Speed Method”. Turn on “High Contrast Pixels” and “Lock Completed Pixels”. This combo makes misclicks impossible! Then move your mouse in any way you like, and as fast as you want, while holding down the left mouse button. Your cursor would feel more like an eraser than a pencil. When done with your selected colour, move onto the next one and repeat.


Word of warning – using this technique too often will make the game boring and repetitive to the point of killing all the fun! However, in some images the colours are highly mixed, extremely scattered, come in very irregular patches or diagonal lines. One such example is “Moon” in Book 2 (which seems to be based on a photograph). Book 3 (also known as “Patterns”), consists of such images almost entirely. In these cases, using the hyper-speed method will prevent the game turning into a chore.

This is all for Coloring Pixels Tips & Trick Gameplay hope you enjoy the post. If you believe we forget or we should update the post please let us know via comment, we will try our best to fix how fast is possible! Have a great day!