This guide is intended for those who want to find, extract and convert the game files (mainly textures and audio files). Although SE made it harder to export the a*sets of this game, it is still an easy process as there are various tools that you can utilise.

If you want to deal with the pc version of this game, which is highly likely, you’re gonna have to rename the files so that they would match the ps3 ones. While this is fairly an easy process, you can also get the original ps3 files from certain places if you don’t want to waste your time on that. Alternatively, you can decrypt the pc files using .bat files but that would needlessly complicate what is normally a simple process (since apparently it’s not just for extracting but repacking as well). However, if you wish to export .trb files properly, you have to use the original ps3 files as simply changing names is not enough for Noesis to extract them.

Renaming the files is necessary because the program we’ll make use of, called Noesis, cannot read the pc version of these files. Noesis is developed by Rich Whitehouse and offers supports for many file formats;

One crucial advantage of using ps3 files is that you can preview and convert the .trb files – texture files- into images. 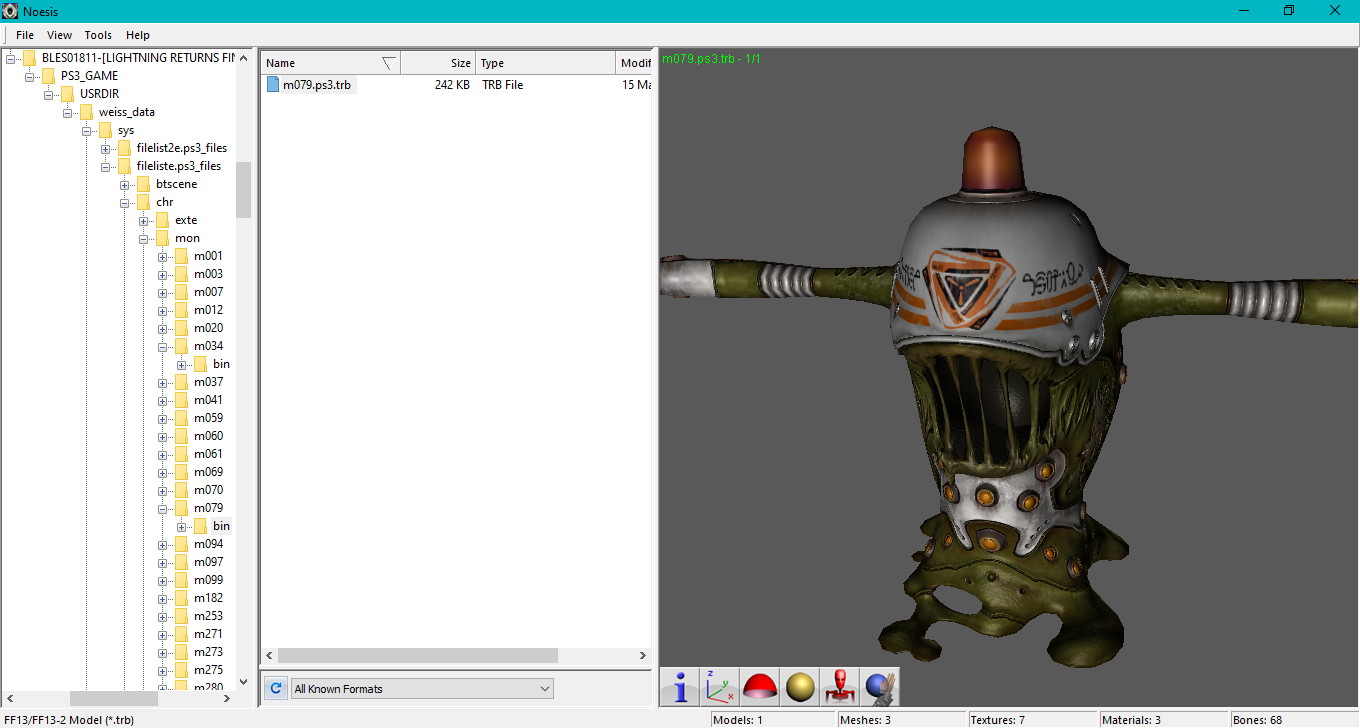 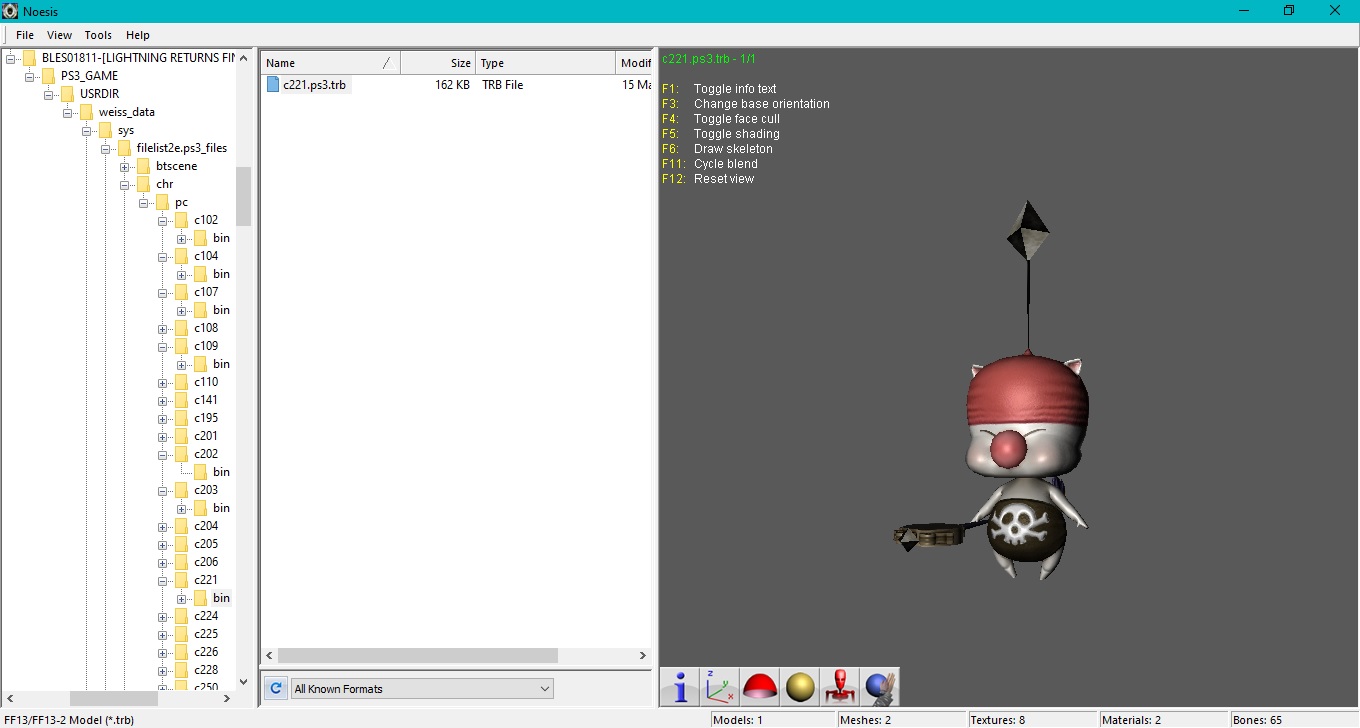 For some reason, you can’t do that with the pc version of these files. Instead, you can only export .trb files but there is currently no way, at least none that I know of, you can see, let alone convert them; 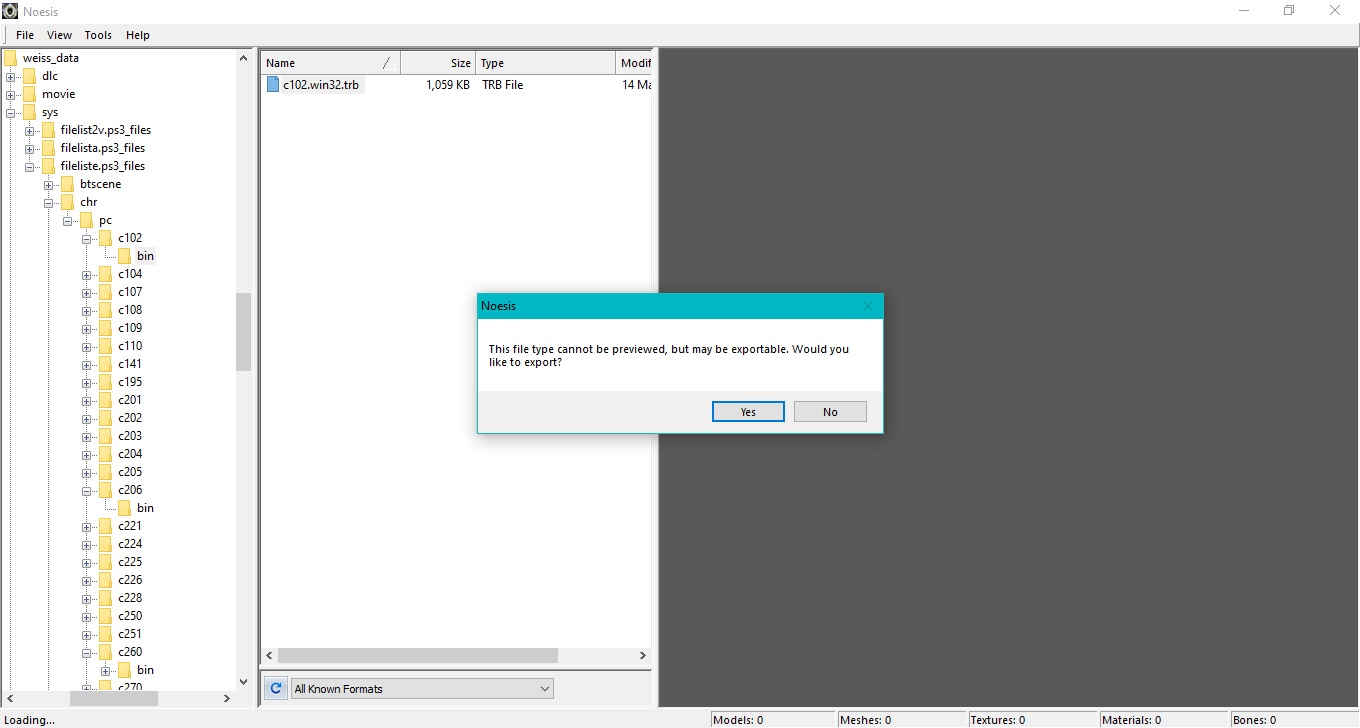 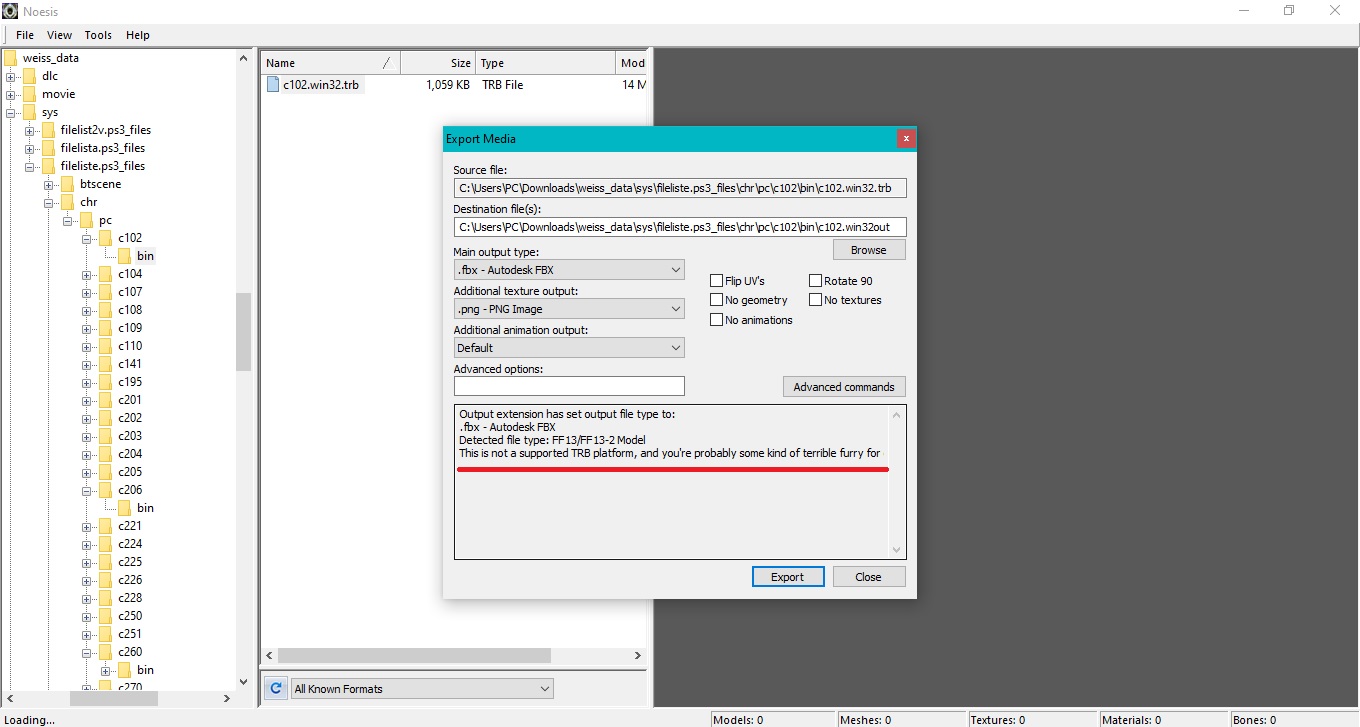 Foobar2000 is another program you’ll need if you want to play the audio files that you extracted;

It is necessary because not even VLC can play the audio format of these files (.scd)

You cannot change the extension into for example .mp3 to play them. You’ll have to open them on foobar2000, right click, convert, quick convert and choose mp3- or any other formats- from there.

You might want to automate this conversion process, since there are so many audio files. You can do that with a program called Vorbis. Normally, you’d have to configure a .bat file with a command line but I got you.

Extract these files into the folder of .scd files you wish to convert and open the bat file. If you want to convert them into audio formats other than .mp3 right click the bat file and edit this part “%%a.mp3”

But before you can convert them, you have to export these files in the first place, which I explained in depth below.

First, go to this folder;

Inside, there will be 4 different folders. Ignore the “dlc” and copy the remaining 3 folders to another place of your choice. Do not modify them because the game will be broken otherwise and you’ll have to download them again.

The folder called movie is exactly what it sounds, it includes the cutscenes. You won’t be able to open them as they don’t have the “filelist” files. Think of these filelists as a compa*s, all of them correspond to different big .bin files. Fortunately, their names are identical, and so you can easily see which ones are connected. For the movie folder, you will find their filelists in the folder called “sys”. 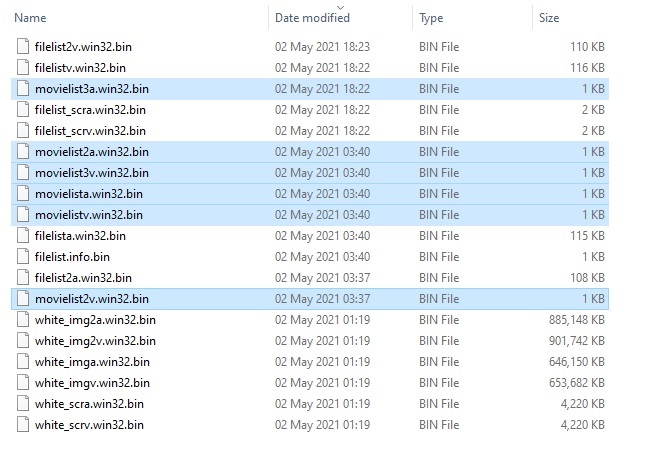 Cut&paste them to the movie folder.

If you remove the file called filelist.info.bin, you’ll see that the remaining 12 files in “sys” folder are actually connected to each other.

Fairly easy to discern, no? Keep in mind that the files in zone folder also have the same pattern. Only problem is their filelists are not included, so you’ll have to download them here – [20.nz] . Small img2 files are just the useless mirrors of the actual img files so delete them from zone folder.

If you’re having trouble distinguishing them, sort them out by their size; 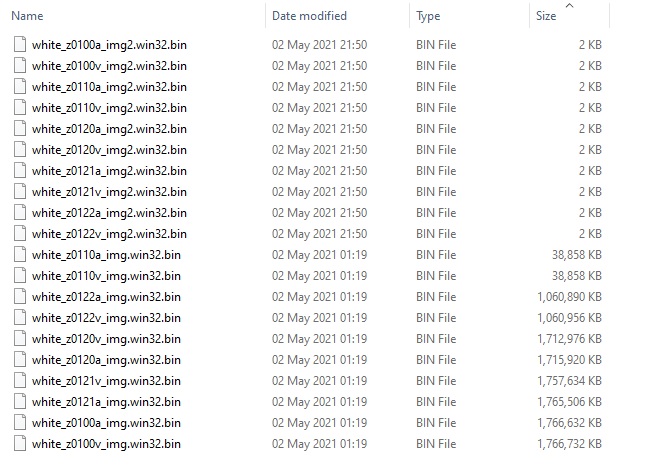 Now that you can see their connection, all there is left to do is rename them. Replace .win32 with .ps3 for all these files and you’re all set for Noesis. I already changed the filelists I gave for zone folder into .ps3 so all you have to do is rename the remaining img files;

Noesis is portable so you don’t have to install anything, just extract the files and open Noesis.exe.

Either find the file you wish to open from navigation panel or choose file>open file; 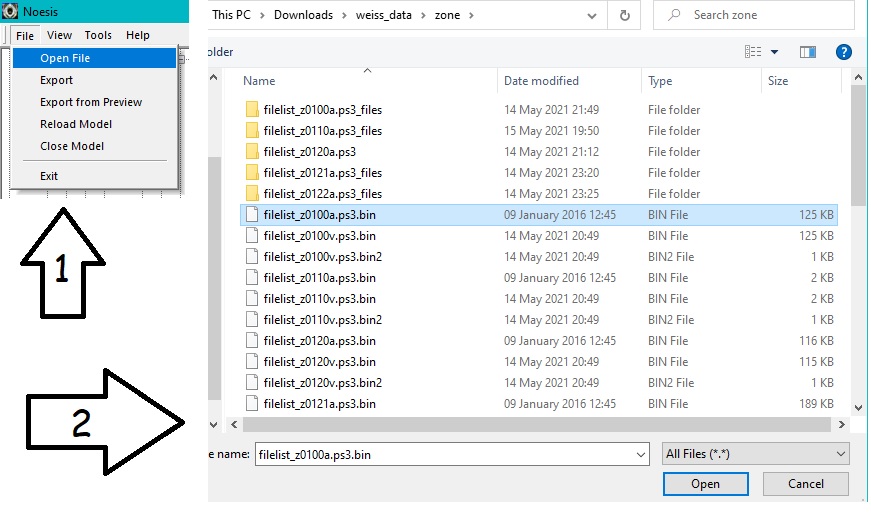 Keep in mind that you have to choose the filelist file. When you do that you’ll get the following screen; 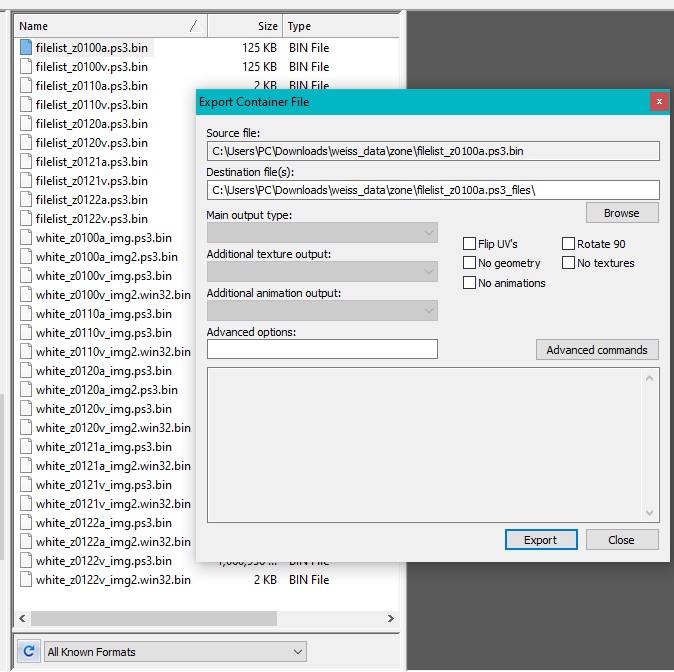 You can choose the destination of the exported files here. After you press export, you will be required to choose its corresponding file, which includes the actual files you wish to export;

You’re essentially providing Noesis the binary chunks of the filelist file, which in turn will export them to the destination of your choice.

The program will export every file in that .bin file, for example filelist_z0100a looks like this;

This was a texture focused file, though it did have some audio files such as Lightning’s battle lines.

Once again you can see that there is no way to open .trb files. If this filelist were an original .ps3 file, you could open it on Noesis and even export it as a .png/.jpg file.

Thus, if you are dealing with the pc version of these files, you can only extract & play movie and audio files. Movie files are located in their respective folder, after you export them you’ll see that their file format is .bik, which shouldn’t be a problem to handle.

As for audio files;

-they are generally found in the files of zone folder

The “v” indicates that the files in it are meant for Japanese version, while “a” is the English version of the same files.

After you export the audio files, you can listen to them using foobar2000 and choose to convert them either individually or collectively (see intro part above).

Here we come to an end for LIGHTNING RETURNS: FINAL FANTASY XIII Converting and Extracting Game Files hope you enjoy it. If you think we forget something to include or we should make an update to the post let us know via comment, and we will fix it asap! Thanks and have a great day!