A good strategy to use that will allow to reach top 2 consistently!

Bomber Grounds: Battle Royale is a fun game to play. It is built like retro bomber games like bomber man. It is a whole ton of fun to play with the one problem that it is a battle royale. It is tricky to win battle royale games due to the amount of players that all spawn in. But do not worry! This guide will give you a strategy on how to reach end game without getting blow-up or thwacked AND this guide will show you how to win in show-downs.

You have opened up the game for the first time, you have clicked the start button, and you are air-dropping down onto a convient floating island. The first thing that goes through you mind is
Fudge what am I doing
Here what you do:
1. Air-drop near a cluster of 2-3 boxes that can be blown up via a bomb chain reaction

2. Began blowing up as many boxes as you can and pick as many stars as possible.
WARNING: do NOT ever in you right mind attempt to engage any group of 2 or more players
battling each other. The most frequent result is that you and everyone else dies in the encounter with no clear victor.

B. run into a skirmish and steal any stars right out from other people’s noses

4. Gather as many stars as you can until you reach lv. 3

5. Began using your weapon to defeat people. Your charge time on your swing is reduced every time you level up. In addition, you can get stars from killing people.

5B. If you are unable to reach level 3 and boxes are scarce, then try to hang out near big skirmishes chucking in bombs. If anyone dies in those encounters, rush in to grab the stars.

You have made it to endgame and its just you and a few people left. If you properly followed part 1 of this guide, you will be at lv 3. The main reason you want to be lv. 3 is because it grants you superiority over all non lv 3s. Each level increases bomb ammo, blast range, weapon charge, and weapon reach. If you are the only lv 3 player just try and take people out via weapon as it is quick, efficient, safe, and the best way to exterminate all other players : D.

But what happens if everyone is lv. 3?

Try the following tactics to take your foe off guard

1. Surprise Bomb:
Certain maps(like the beach) have a huge pool of water in the middle. One way to catch people off guard is to place 1-2 bombs at the edge of the pool, charge up your weapon swing, wait till bombs are starting to go off, then chuck them across to the other side.
note: move to the side when you whack. you don’t want to get blown up by your own attack. 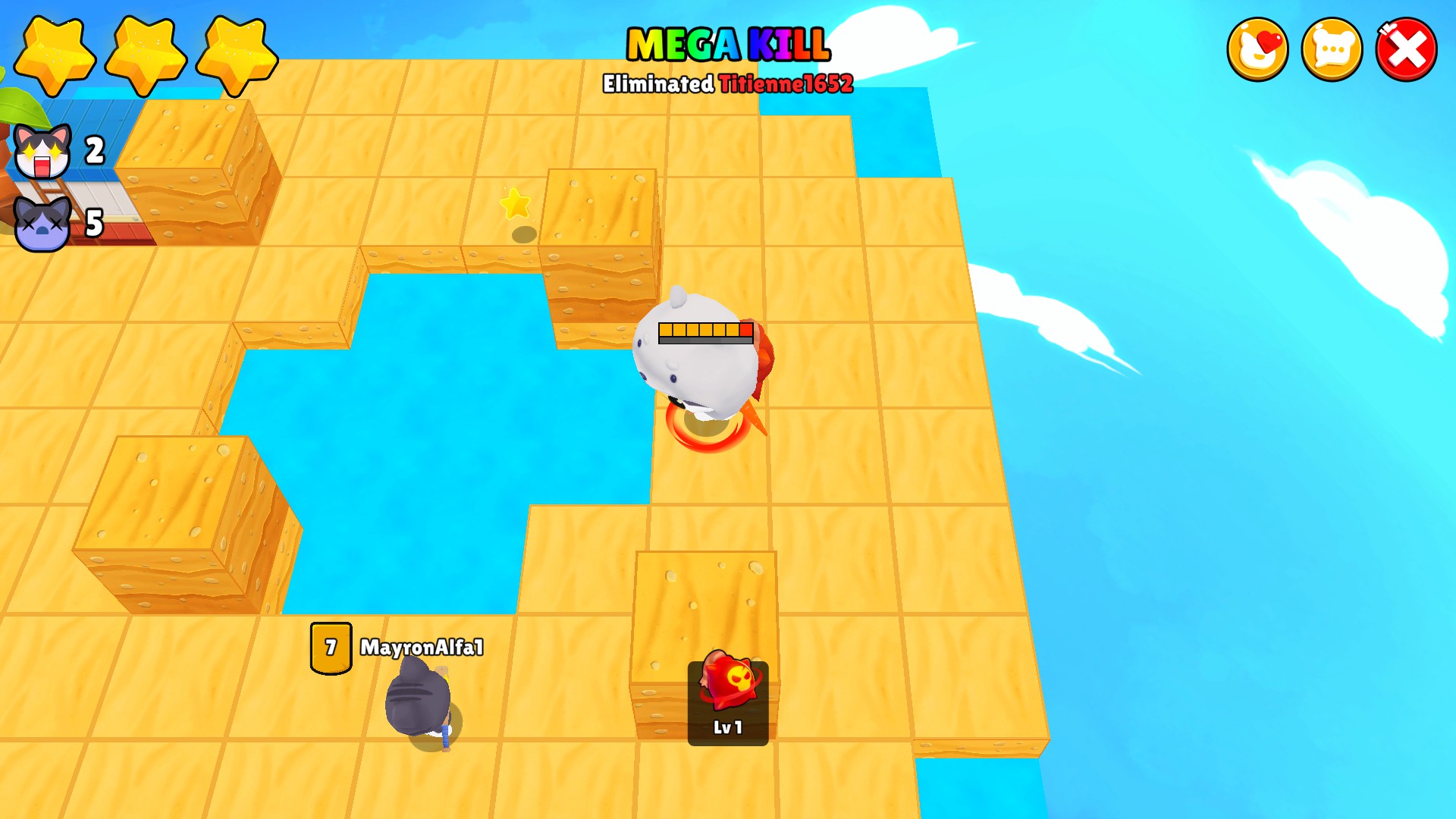 2. Fence Attack:
If their is another player alive and he has his weapon at the ready. You can use that to your advantage. Start by charging up your weapon attack then slowly chase your opponent with your charged weapon. The map design typically works almost donut like with turf on both sides but a wall or pit in the middle. Because of this design, your target has run away from you which puts you towards the other guy’s weapon. Keep chasing him until he gets boxed and defeated by you or the other guy
Yay! one less animal in the arena

3. Skinny Bean Bomb:
This tactic is very situational but can be quite useful. Sooo, if you still posses a mega bomb at endgame, and your opponent is cowering behind a wall with a corner in it, you can do a little cheese to secure the victory. Just place the mega bomb right next to the wall and back away. if their is a space right next to the mega bomb that is not blocked by a wall, the bomb will always blow into regardless if there is walls or not. I have only pulled off a Skinny Bean Bomb once, but that was the most satisfying thing in my entire career as a bomber.

Hope you enjoy the post for Bombergrounds: Battle Royale The Bomber Grounds Battle Royale Strategy, If you think we should update the post or something is wrong please let us know via comment and we will fix it how fast as possible! Thank you and have a great day!