Yu-Gi-Oh! Master Duel is the main official way to play the Yu-Gi-Oh! card game in an all-virtual capacity. While Duel Links existed before it, the two formats are drastically different despite using the same rules for the mechanics. Almost every card ever released is available in Master Duel, allowing for just about any kind of deck to be played.

Vampire decks are one that early Duel Links players may be familiar with when it dominated the meta. In Master Duel, these decks have a lot more options to play with, and are able to take advantage of powerful generic Zombie cards to make for a formidable deck. 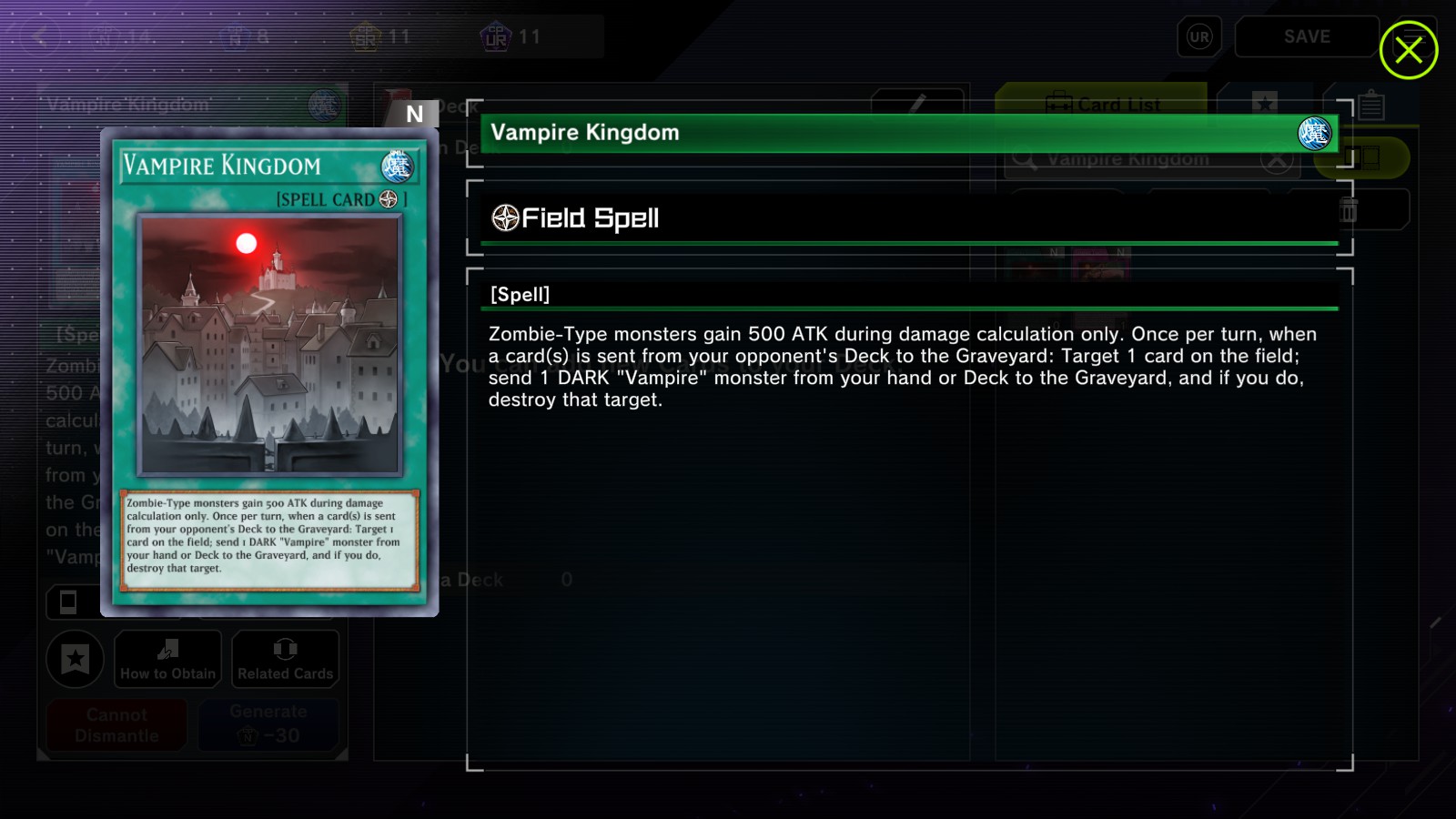 The Field Spell for the Vampire Archetype, Vampire Kingdom, is an easy way for Vampire decks to clear the field. It gives a 500 Attack boost whenever a Zombie Monster battles, which isn’t a major effect but an added bonus. Its real power comes from its second effect.

Whenever a card is sent from your opponent’s deck to the Graveyard, you can send a Dark Vampire Monster to your Graveyard as well to destroy a card on the field. It’s not uncommon for the opponent to do this on their own, but Vampire decks can just as easily force the effect out to start popping cards. 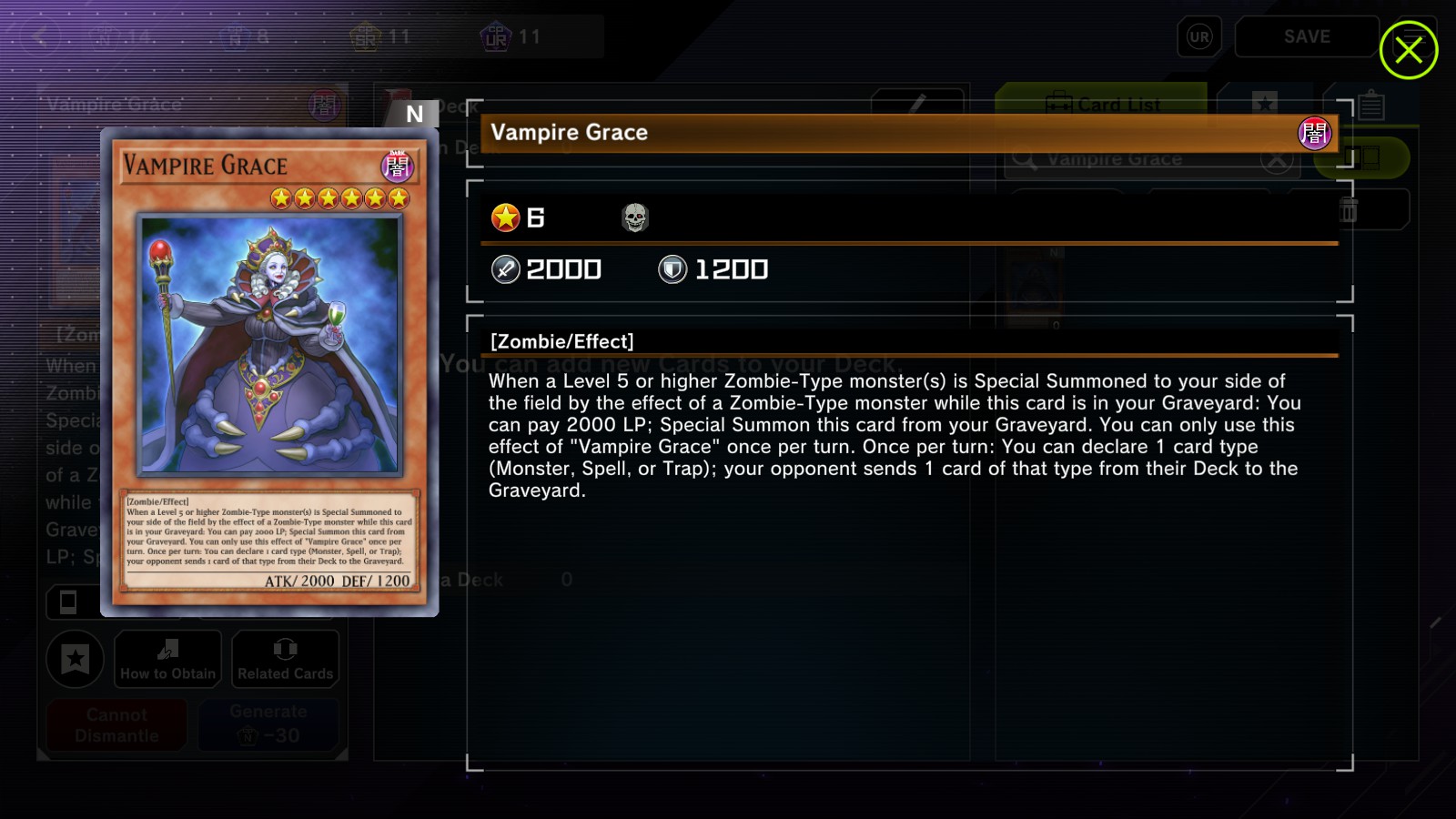 A card that was the main Boss Monster of the Duel Links variant of Vampires, Vampire Grace is also handy in the Master Duel version. It can easily special summon itself from the Graveyard, able to do so whenever a Level Five or higher Zombie Monster is special summoned.

Vampire Grace can also force the opponent to send a specific card type to the Graveyard, which in turn triggers Vampire Kingdom. Vampire Grace’s second effect isn’t a hard once per turn either, allowing for the effect to be used multiple times by different copies of it to potentially wipe the opponent’s field entirely. 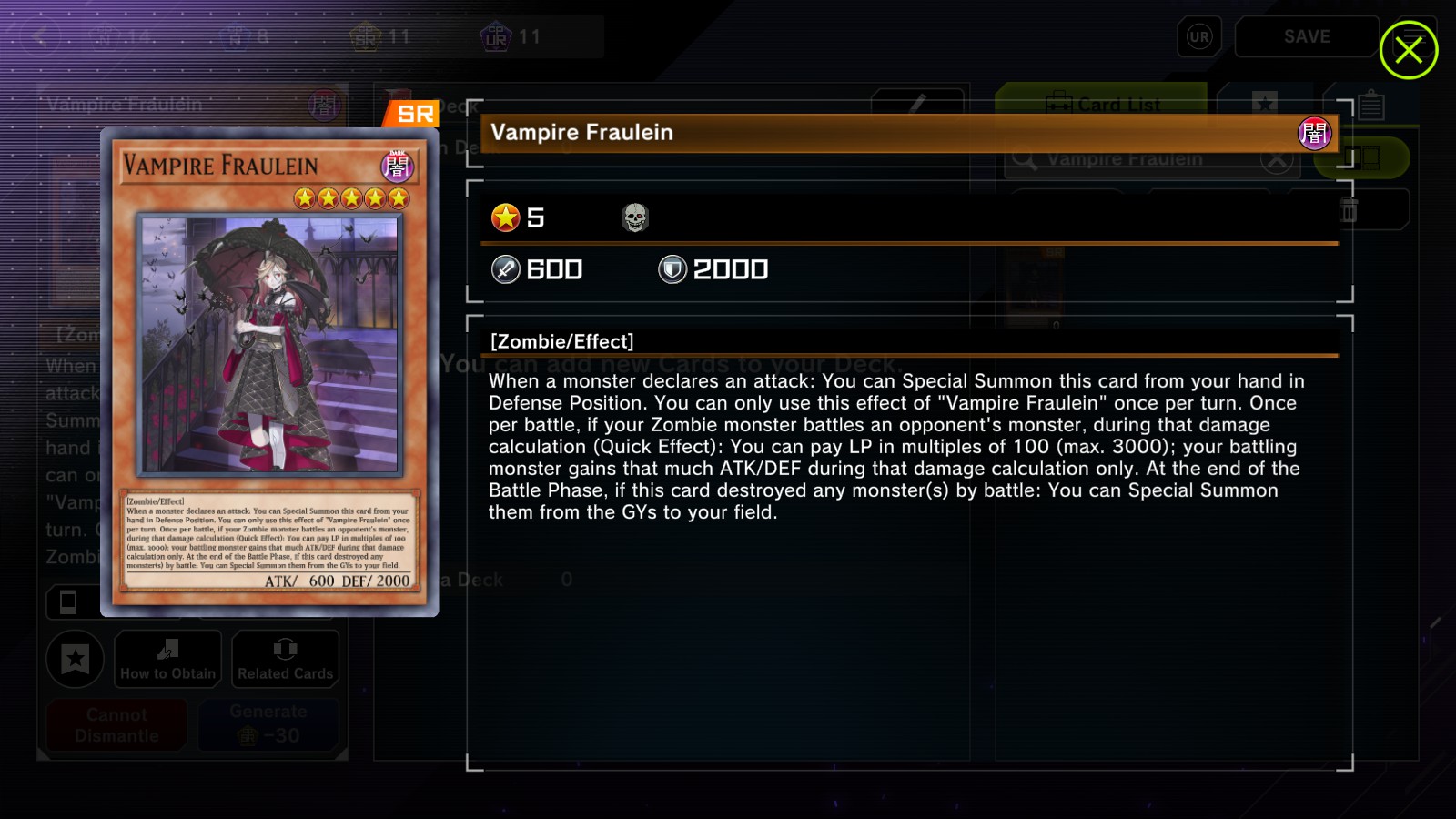 Vampire Fraulein is a deceptively versatile card. Whenever an opponent attacks, you can special summon it from your hand. Then, during any battle, you can pay Life Points to give it stat boosts to ensure it can stay on the field until your turn comes back around.

Vampire Fraulein is a scary card for the opponent, as it can special summon any Monster it destroys by a battle at the end of the Battle Phase. This effect isn’t once per turn either, so if you have a way to attack with Vampire Fraulein multiple times, or multiple copies of it, you can potentially steal all of your opponent’s Monsters for your own use. 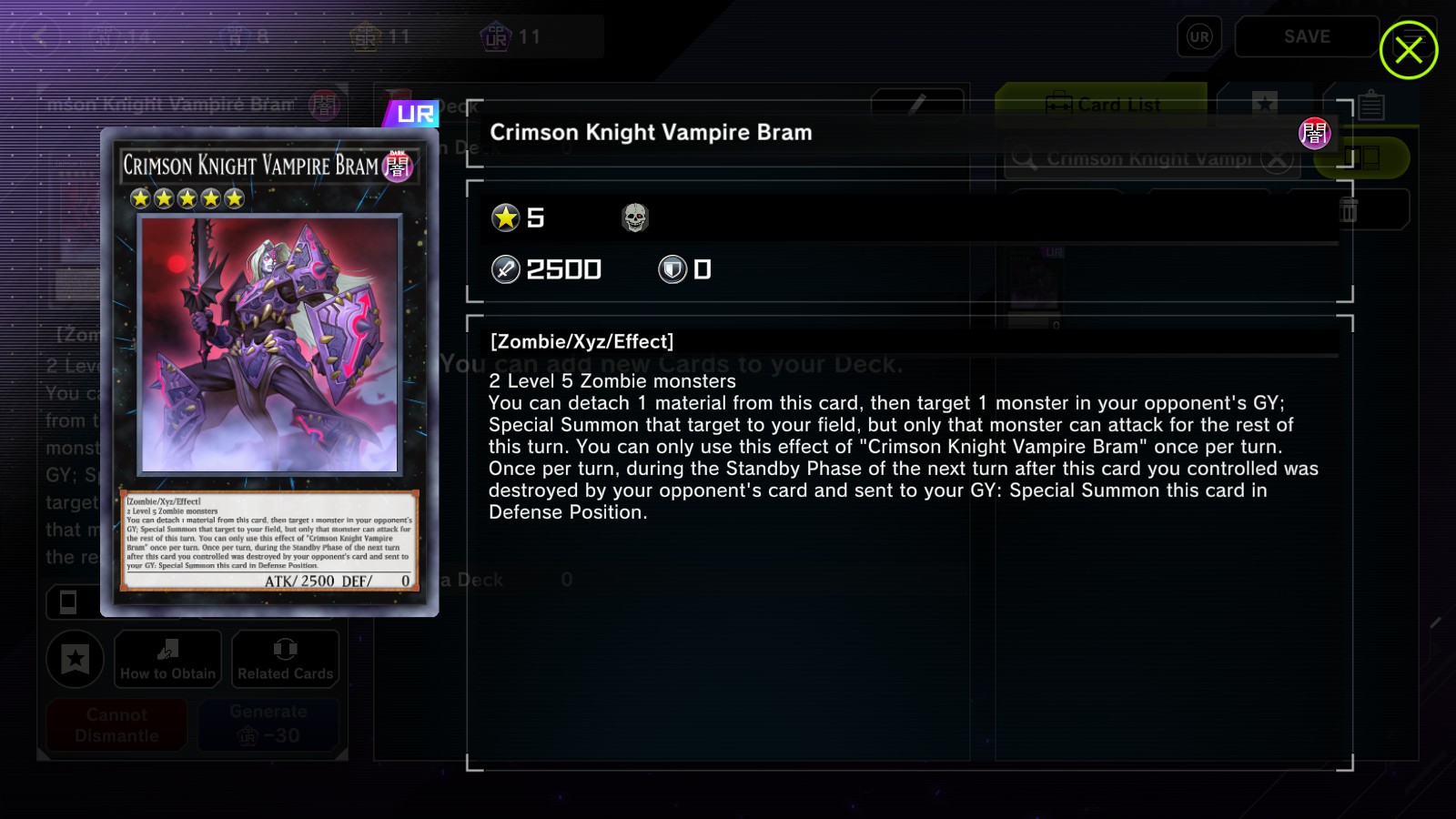 During the Standby Phase, if Crimson Knight Vampire Bram was destroyed you can special summon itself back in Defense Position. While its Defense is zero, it gives you a free body to make Link Plays with, or at worst, a body that can slow the opponent down. 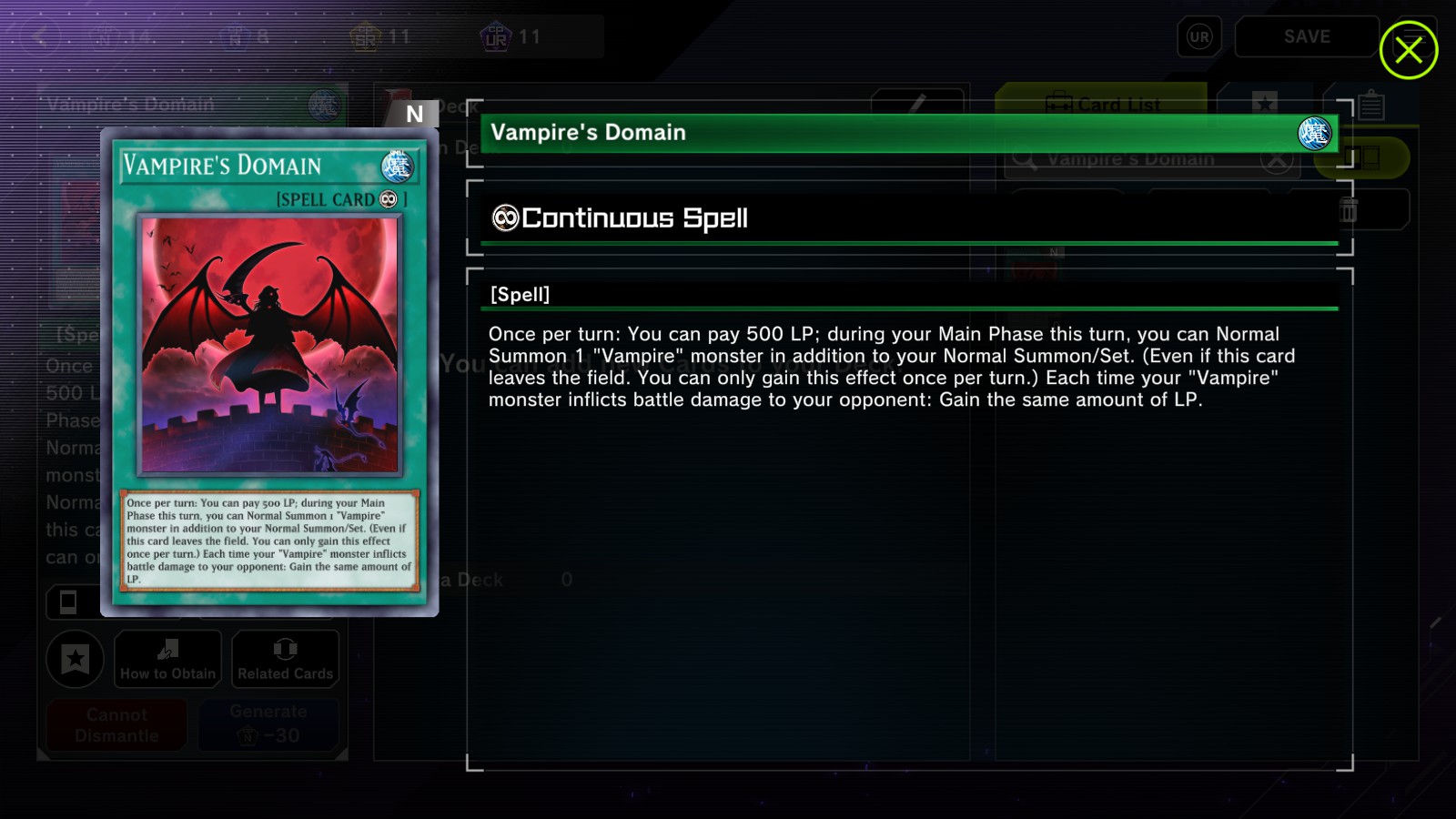 Vampire’s Domain is a Continuous Spell card that is very important for the Vampire Archetype. Many of their main Monsters are tribute summons, which is normally a bad thing. Vampire’s Domain, however, helps you to get around this downside. Vampire’s Domain lets you gain an extra normal summon that can be used for tributing.

It has a secondary effect that lets you gain Life Points equal to the amount of damage a Vampire Monster deals. Since Vampire decks use their Life Points quite a bit, this Life Point gain is especially useful in the long game.

Vampire Retainer is one of the main searchers for the Vampire Archetype, but requires a bit of extra work to get its search effect off. Vampire Retainer can search for any Vampire Spell or Trap card whenever it gets special summoned. 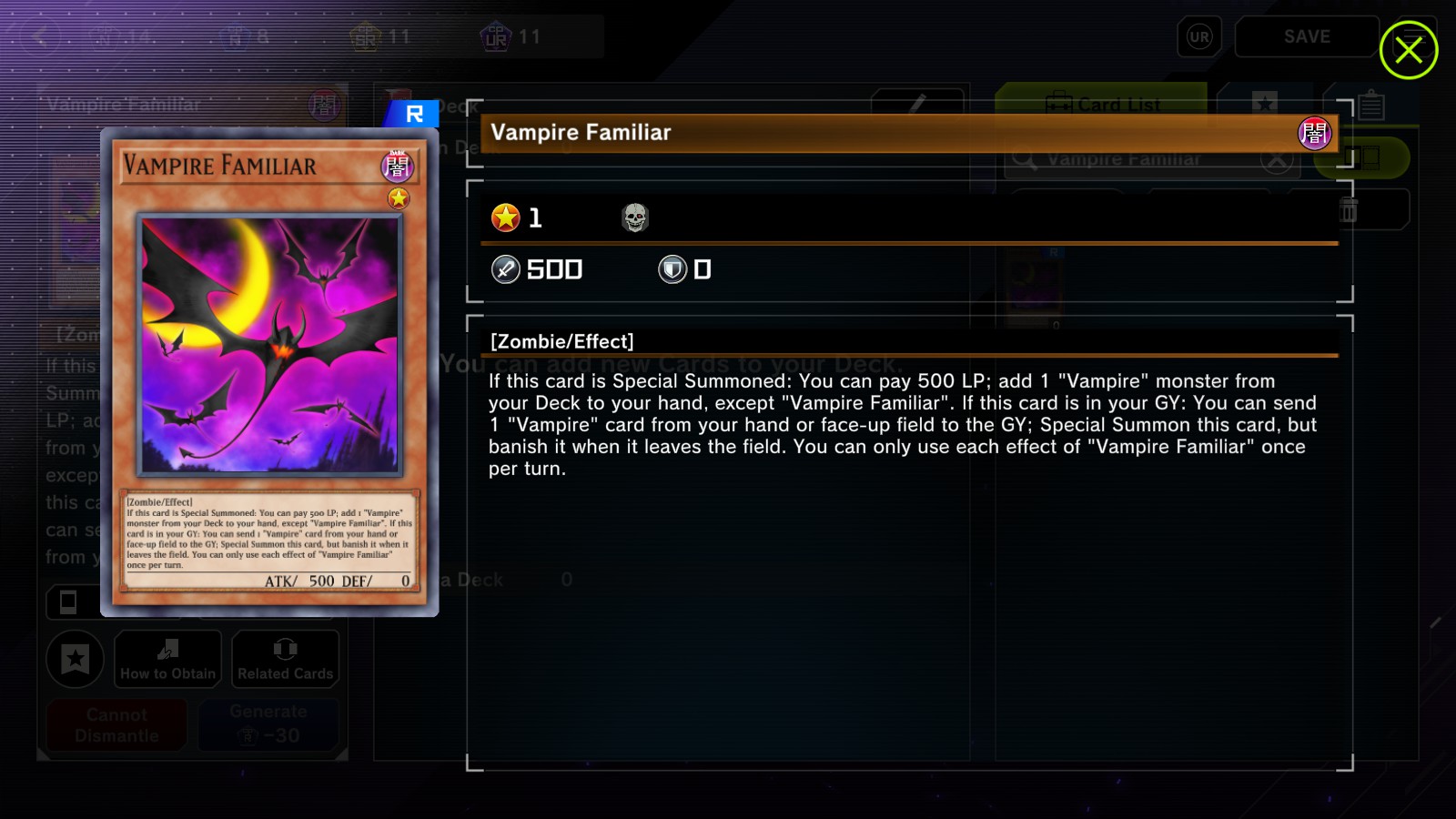 The other primary searcher for the Vampire Archetype, Vampire Familiar shares many effects with Vampire Retainer. It can be special summoned from the Graveyard by sending a Vampire card there. When it’s special summoned, you can search your deck for any Vampire Monster.

This pairs well with Vampire Retainer, as the two can trigger both their effects with the use of the other. This allows you to rather easily get a search for both a Monster and Spell or Trap card. A searcher is great in any Archetype, and Vampire has access to two equally great ones. 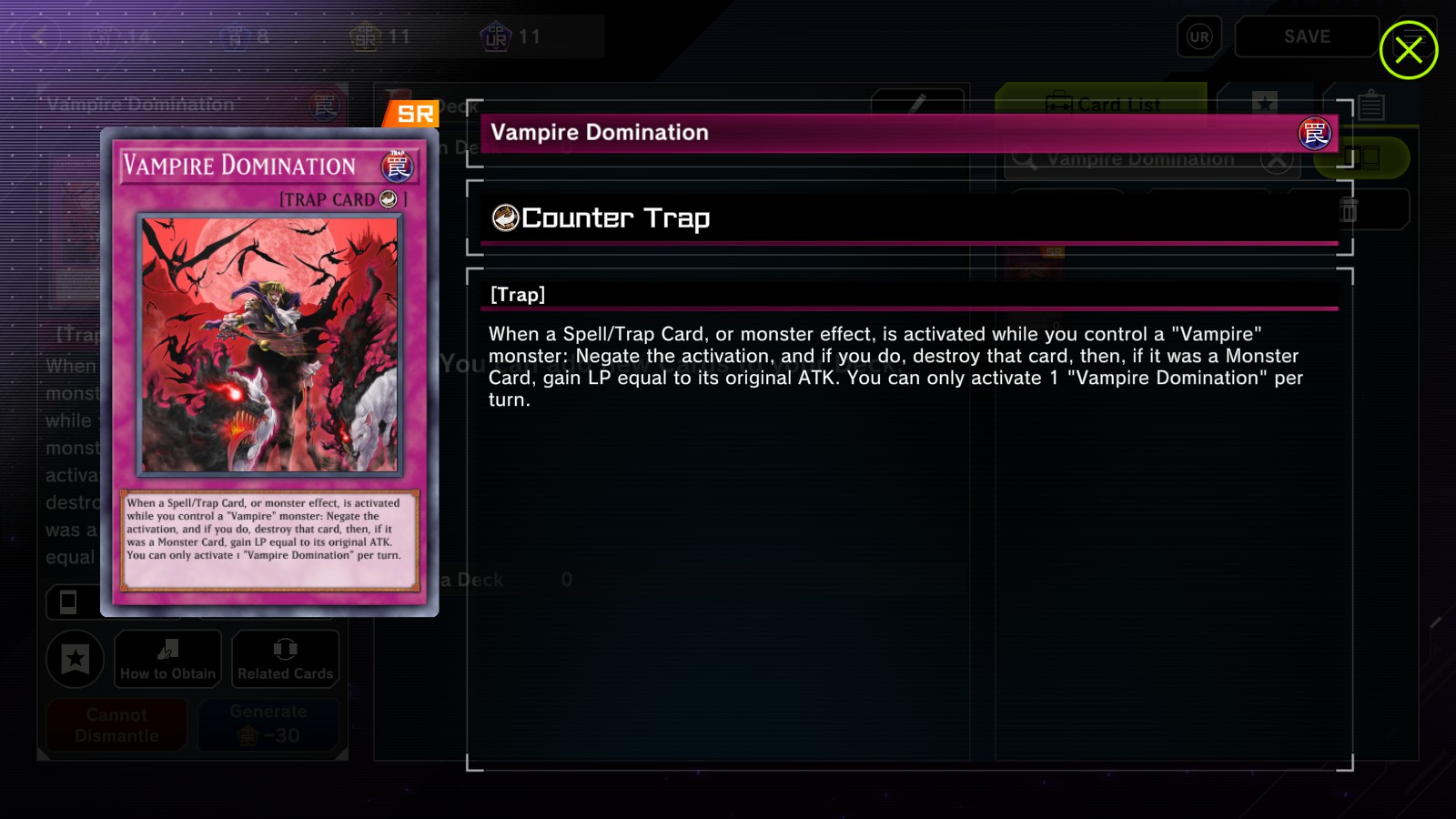 Vampire Domination is an in-Archetype Counter Trap card that can be activated so long as you control a Vampire Monster. It is an omni-negate, able to negate the activation of any Spell, Trap, or Monster effect.

Counter Traps are incredibly powerful, as they can only be reacted to with other Counter Traps.

Since it has Vampire in the name, Vampire Domination can easily be searched out with cards like Vampire Retainer. It has an added bonus of gaining you Life Points if you negated a Monster effect this way, which in some cases can be well over 2000. 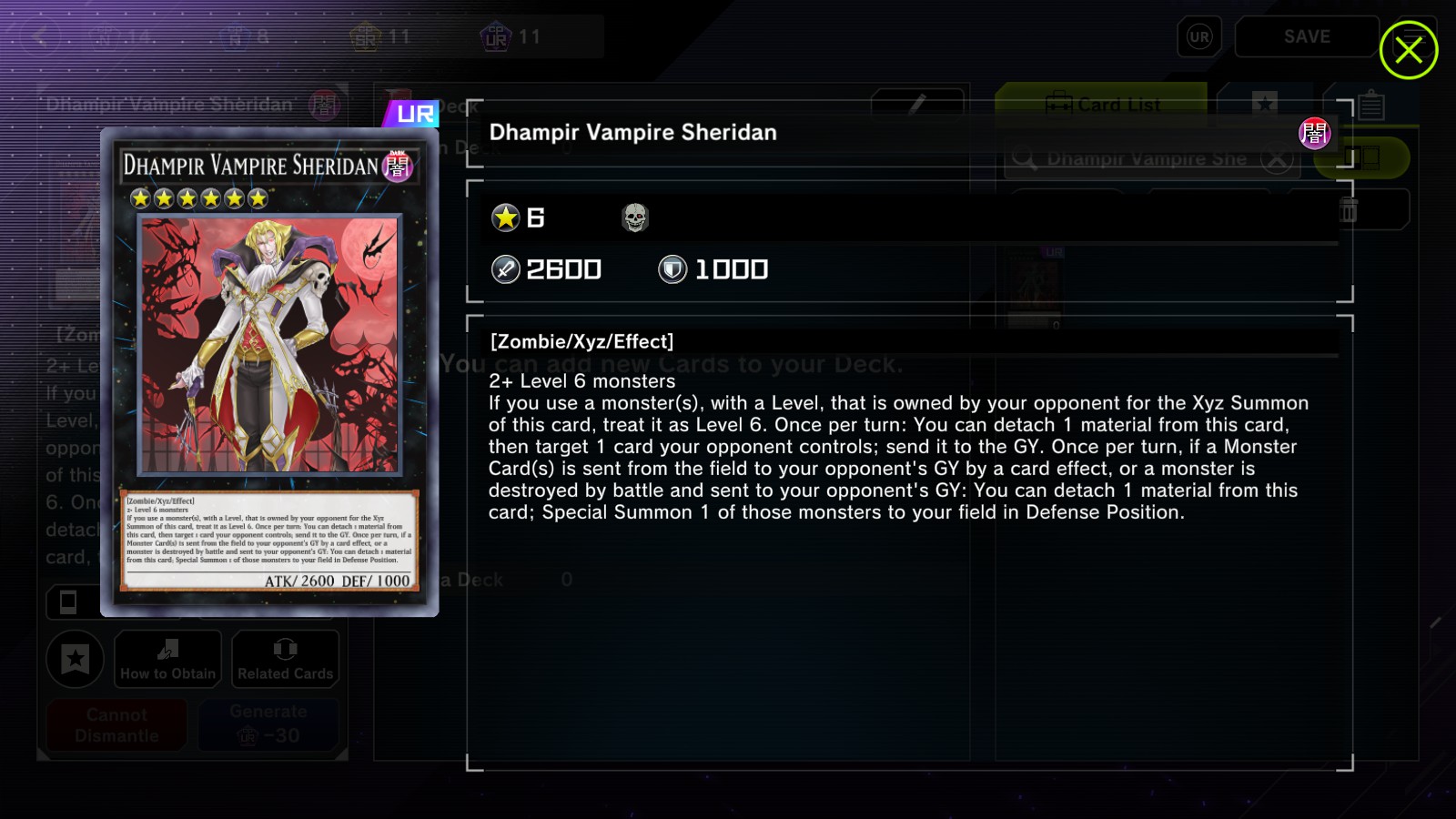 The main Xyz Boss Monster for Vampire decks, Dhampir Vampire Sheridan, comes with a plethora of great effects. If you use the opponent’s Monster as one of the materials, it can be treated as a Level Six Monster for its Xyz summon. Once it hits the field, Dhampir Vampire Sheridan can detach a material to send a Monster card to the Graveyard, one of the best removal effects in the game.

It can also use its material to special summon a Monster the opponent controlled that was destroyed that turn. Dhampir Vampire Sheridan can use multiple Level Six Monsters as well, allowing you to easily use the powerful detach effects multiple times. 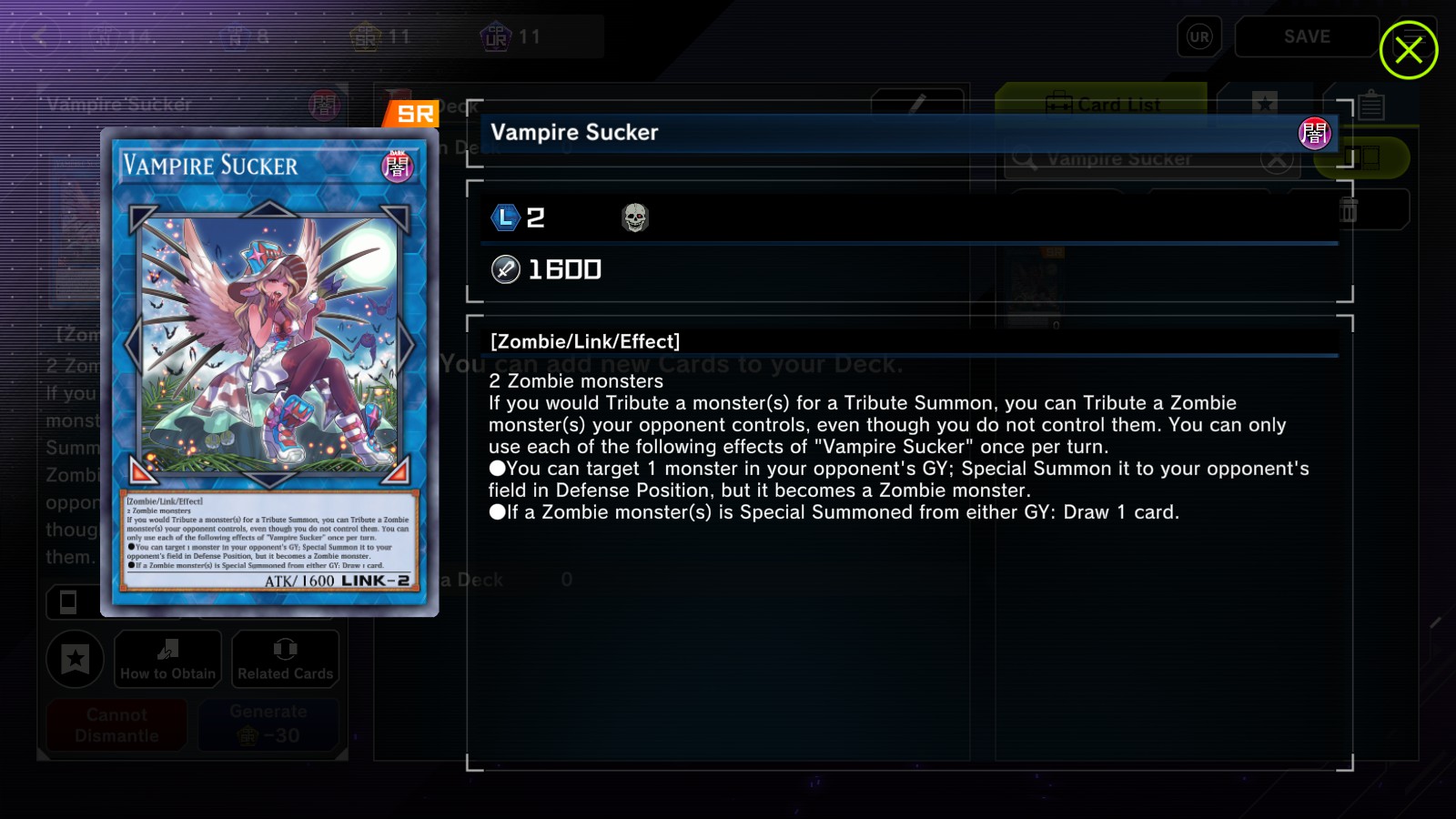 Vampire Sucker is the sole Link Monster of the Vampire Archetype and is so good, it’s played as a generic Link Monster in practically every Zombie-based deck. It only requires two Zombies Monster to Link into, and you get very powerful effects for it.

Vampire Sucker lets you special summon a Monster from the opponent’s Graveyard for free, and draw a card whenever a Zombie Monster is special summoned. You can even tribute the opponent’s Monster if it’s a Zombie Type as if you controlled it, which is the best way to get rid of problem Monsters since not many are protected from being tributed. When in conjunction with Zombie World, this makes it incredibly easy.

Hope you enjoy the post for Yu-Gi-Oh! Master Duel Top 10 Best Cards in Game, If you think we should update the post or something is wrong please let us know via comment and we will fix it how fast as possible! Thank you and have a great day!