Howdy there! This is just a guide talking about how to roleplay, and hopefully how not to fail at it.
(Just a reminder that everyone has a different roleplaying style, and that while I consider myself good at roleplaying, I’m not an expert.)

Rule are something that are quite important in roleplays. Usually for my friends and I’s roleplays we just have two rules:

-Don’t be over-powered
-Please ask before blowing something up

These are just some basic rules that we have, but while there’s the rules of the current server you’re in, there’s also your personal rules and boundaries which I’ll talk about in a moment. Other common rules are things such as no swearing or gore.

In WolfQuest there are many different kinds of roleplays such as:

Sometimes people will have other Rp’s based off books or fandoms, though these are all the most common. My personal favorite is Fantasy, though sometimes I will join a Pack Rp for a bit.

What even is roleplaying?

Roleplaying is playing a role. There’s different kinds of roleplaying as well, but when someone talks about roleplaying in WolfQuest then they’re referring to chat roleplays. For a bit more detail- roleplaying is acting out things. And example would be:

~She yawned and looked up at the sky, seeing it was nearly noon, she stood and stretched before trotting out into the forest.~

Everyone has a slightly different roleplaying style, some people don’t add that much detail, some at so much that you’d assume they were writing a book. And then there’s wolf speak- oh how much I hate wolf speak. Wolf speak is basically when someone uses incredibly fancy/scientific words. It’s so hard to read- but some people are very good at typing in wolf speak. Again, it’s hard to explain, but when you see someone using wolf speak, you’ll know.
Another thing to mention is Out of Rp/In Rp. If something is in Rp then that means it’s something other players can react to, if it’s out then they’re speaking to the actual players and not the characters. If it’s in Rp then it’ll have:

Around it, if its out then it’ll have:

Ooohhhh boy power-players. The scourge of Fantasy Rp’s and the WolfQuest community. Power-players are usually younger kids who don’t know what they’re doing, and forget that they’re not the only main character. Power-players will do things like:

And other things like that- other power-player tendencies include:

As you can tell, Power-players are almost always young kids or new roleplayers. If you see a Power-player, just explain that they shouldn’t do that then ignore them if they try to start an argument (which they probably will.)

Oh and if you’re making a backstory/personality for a wolf oc, then I beg of you please think of a better backstory then:

Pack died in a fire, found a mate, had pups.

Because wow do I see that a lot- oh and while we’re talking about over-used things in characters.

Writing a description/bio for my character is one of my favorite things. I’ll add some screenshots of my bios.

An example of a desc (a bio that you type out in chat) for a character would be something like this: 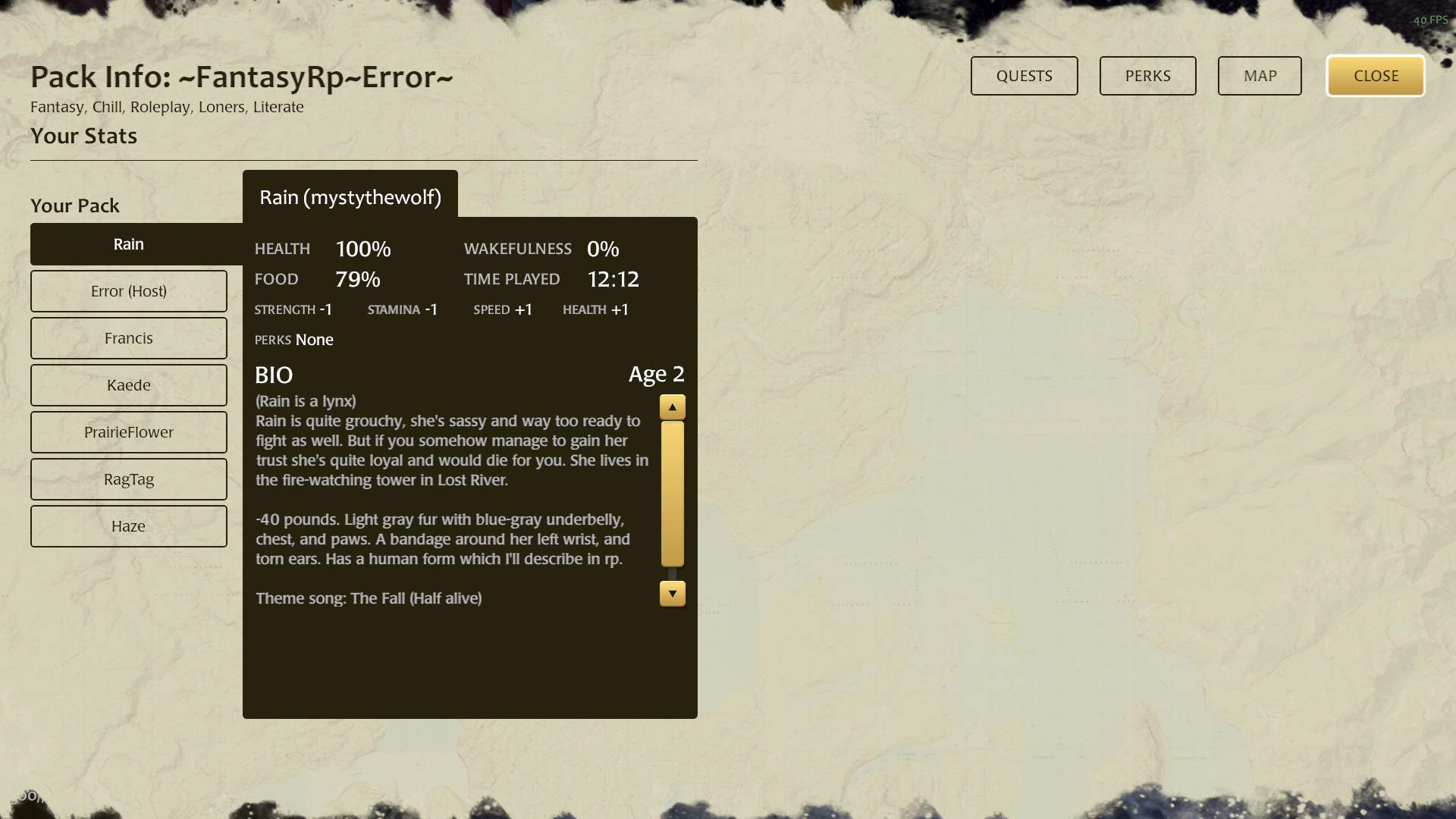 Grammar is something I’m quite picky about, when roleplaying please try to spell things correctly or as close as you can since it’s easier for others to read and understand. Like don’t capitalize random words, and make sure to add commas and periods.

Another thing about making characters is choosing their theme song(s). If you’ve ever played with me you know that I have no control when it comes to theme songs. If I find a song that vaguely reminds me of my character then it becomes yet another of their theme songs. It’s alright to have multiple theme songs, but for you’re bio it’s best just to pick 1-3 of them.

Sometimes people (but usually younger kids) will give their characters mental illnesses. Younger kids usually do this in an attempt to be ‘quirky’ or ‘cool’- but usually just portray them horribly. If your character has some sort of mental illness that’s fine, but please make sure that you’re being respectful about it, and please don’t romanticize serious things like depression. It’s not cool.

This is all for WolfQuest: Anniversary Edition Roleplaying Guide in WolfQuest hope you enjoy the post. If you believe we forget or we should update the post please let us know via comment, we will try our best to fix how fast is possible! Have a great day!