This guide details each mission within the Chaos Campaign and gives players insight into when they can pause to battle AI enemies, research technologies, and build up cities between missions.

In this guide, we’ll take a quick look at the Chaos campaign chapters to make it easier for you to decide when to march forward through the campaign and when to hold back.

Chapter 1 – Corpses For The Corpse God 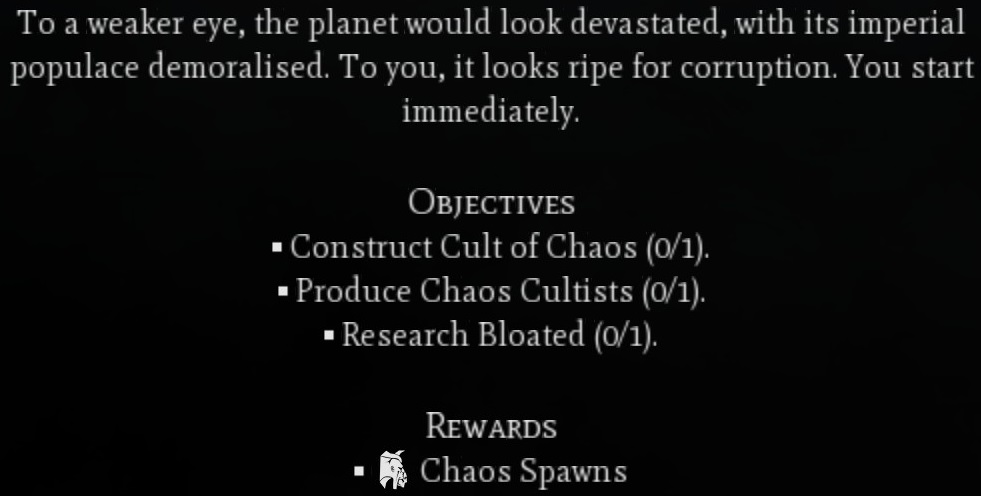 This will be simple, and they’re both things you’d be doing anyway. Produce and research the things. Oddly enough, you’ll be required to research 2 things that you could typically wait for in a normal game. Try to make sure you have a good start location with bonus research otherwise you’ll spend a lot of turns getting 5 choices in Tier 1. It is worth noting that once you complete this step, you’ll be facing an Invasion style event, but it will only include about 6 squads of guardsmen total. 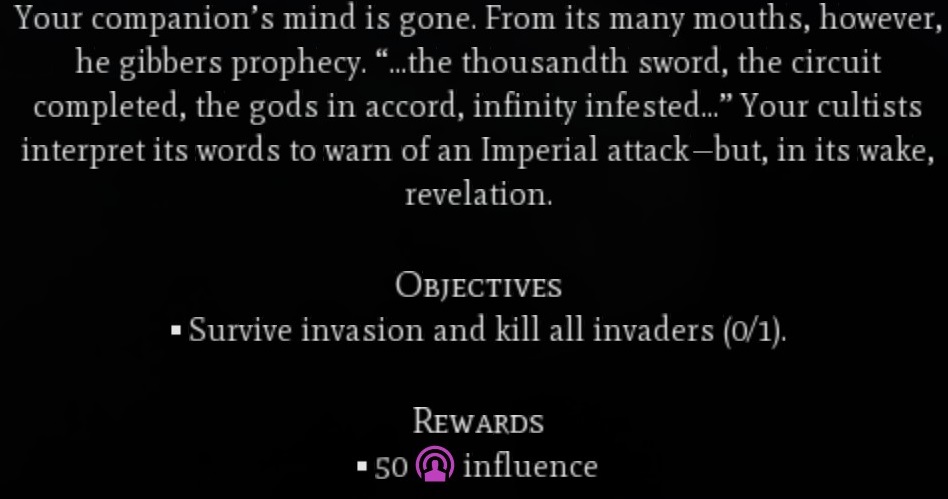 This will be 3 waves of enemies spawning, but it’ll only be 2 Guardsmen squads every other turn. It shouldn’t be too dangerous, especially if you’ve already produced more Chaos Marines.

Chapter 2 – The Rites of Tzeentch 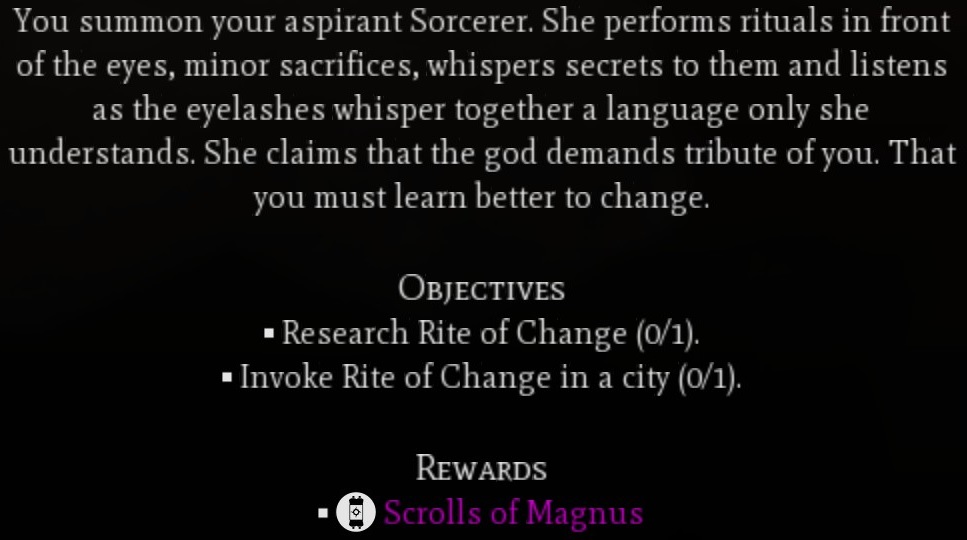 Another Tech we need from Tier 1, but at least it too is useful. If you aren’t already, try to get in the habit of producing and sacrificing cultists in your cities for those bonuses combined with Rites of Change. 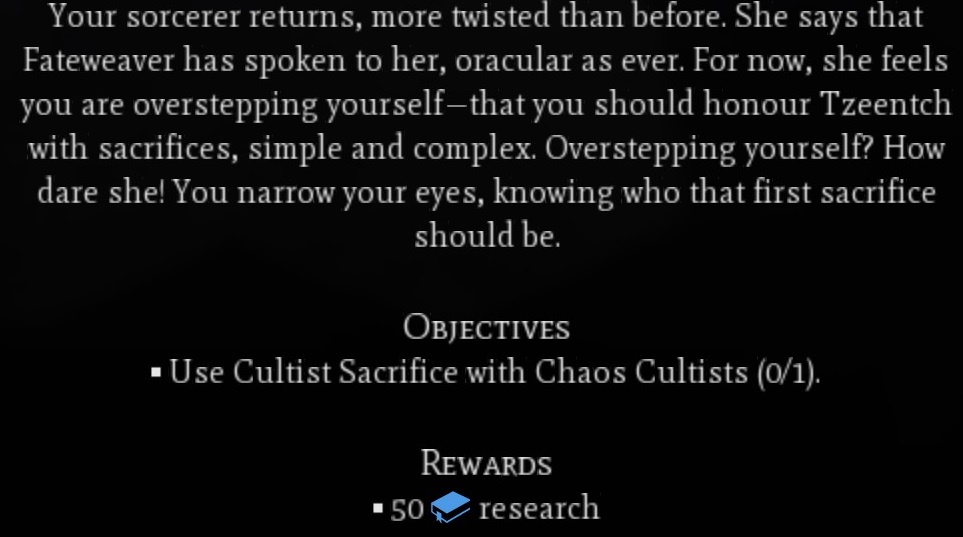 Chapter 2 is all about teaching you how to min/max your city growth and production rates. Chaos ability to expand multiple cities early and boost production and city growth is very nice. Don’t forget the lessons the game taught you here.

Chapter 3 – The Sacrament Of Nurgle 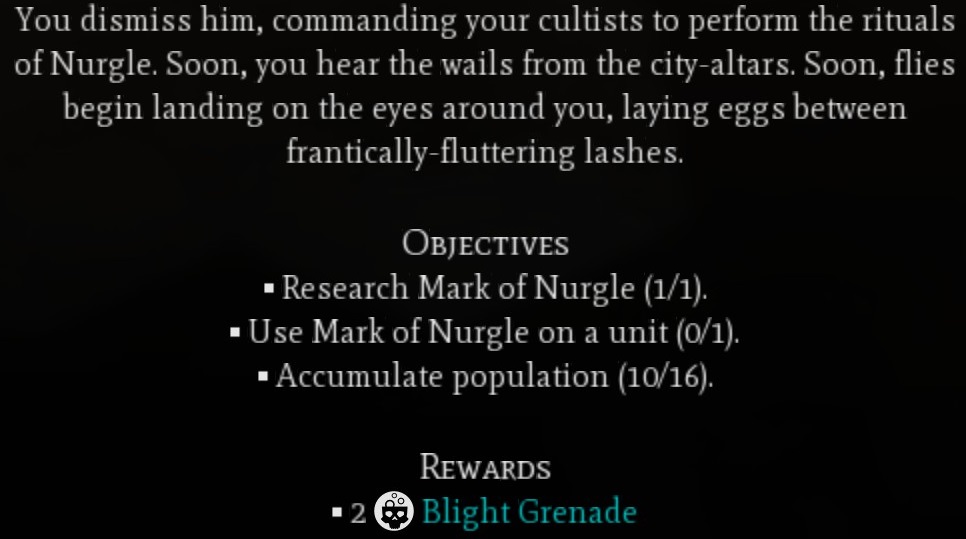 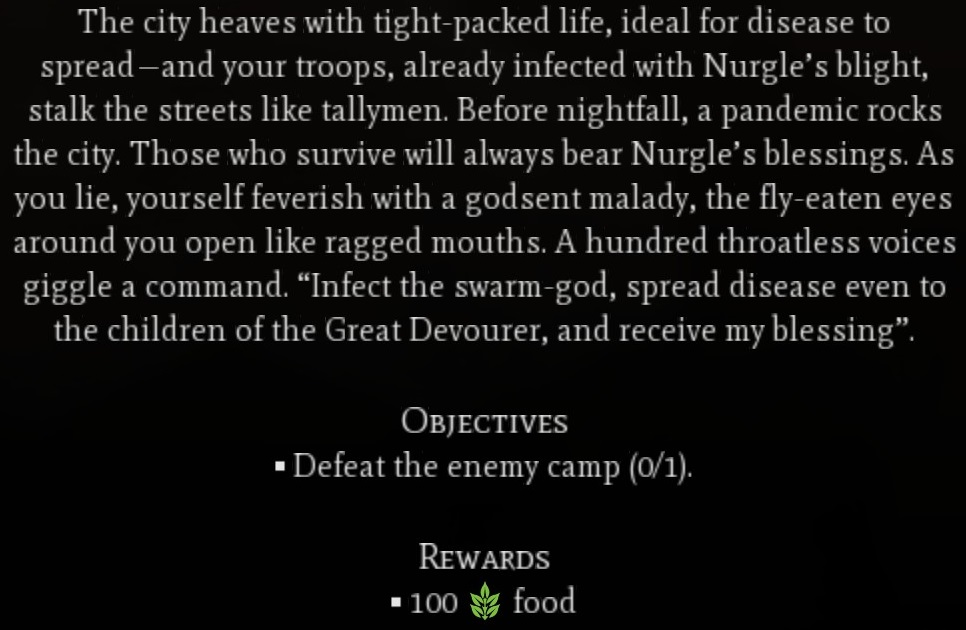 This stage will spawn a neutral Tyranid city and camp of units to defeat. They will be mobbed up around the city center, and if any of your units are near it, you may lose them. Enemy forces include: 3 Tyranid Warrior Squads, 5 Hormagaunt Squads, and 2 Termagaunt Squads. This really shouldn’t be anything challenging to you as long as you’ve been producing Havoc Squads and Helbrutes.

We’ll soon be on the final chapters of the campaign so make sure you’re suitably teched up on research and and producing an army that you’re satisfied with. Before destroying the Tyranid city, you may want to take time to do research, or fight off other players if they are pressuring you.

Chapter 4 – The Rituals Of Khorne 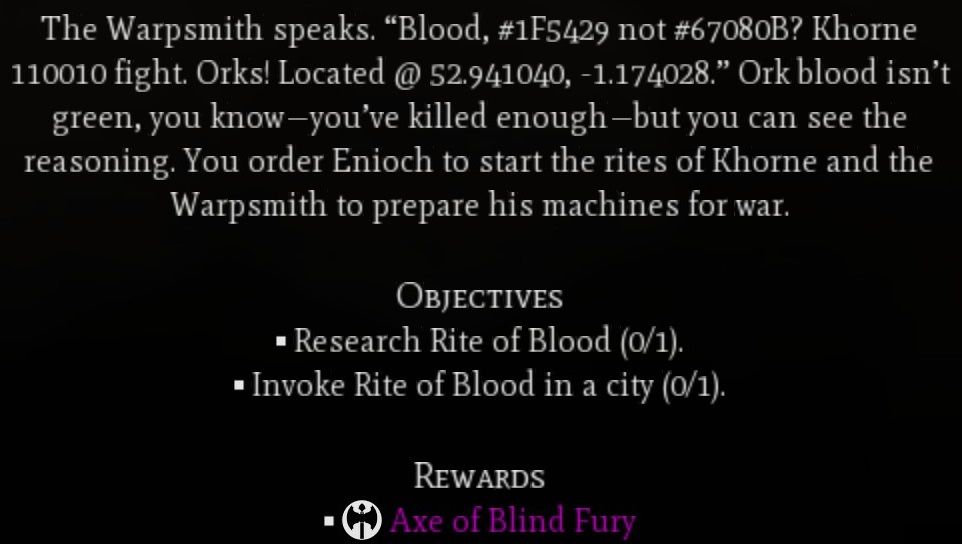 Thankfully we have another good spot to stop here as we research what we need. Take this time to fight any other players, expand your cities, and build up your army if you need to. The Tech we need to unlock is in Tier 7, and depending on how quickly you’ve done the previous stuff, you maybe have to wait some time until you can complete this. You know some large battles are coming up, so continue to unlock and build your higher tier units in the meantime. Be sure you’re ready to proceed here before continuing. The end of Chapter 4 involves defeating a moderately sized Ork army, and you can inadvertently progress all the way through to Chapter 6.

At this point in the game, you’ll almost certainly have already done this and skip directly to the Ork battle. 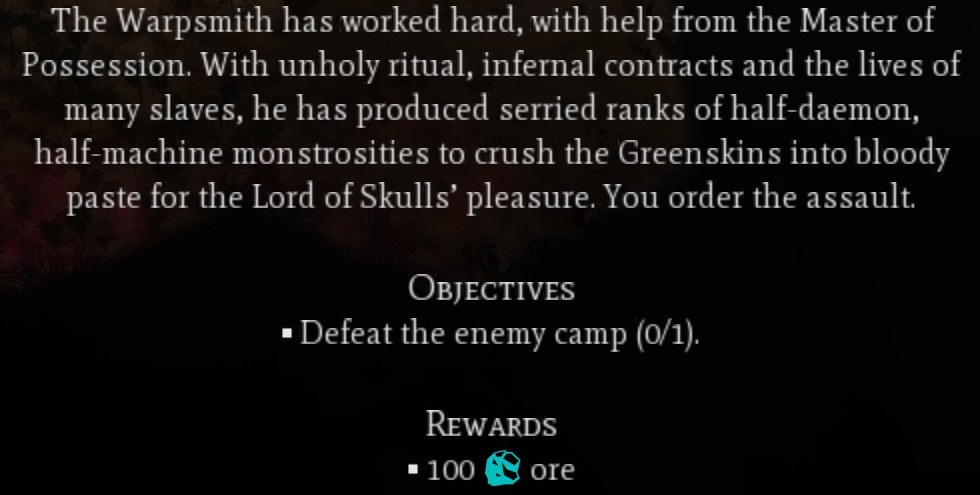 This battle will include: 3 Warbuggies, 5 Killa Kans, 2 Flash Gitz, 3 Boyz Squads, 3 Tankbusta Squads, and 2 Battlewagons. You’ll also have to destroy a neutral Ork City. If you feel unprepared to continue to harder battles, you can try to delay destroying the city and hope no other players do it.

Chapter 5 – The Liturgy Of Slaanesh 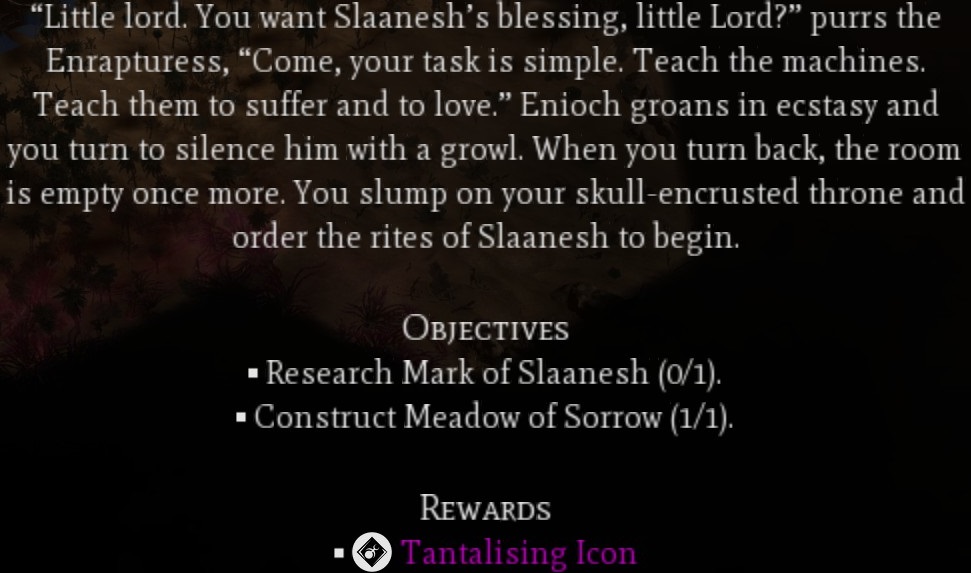 Once again, there is a good chance that this will auto-complete when you get here if you’ve satisfied these 2 conditions. Hopefully you’re ready either way, because I huge fight with neutral Necron units is coming next. 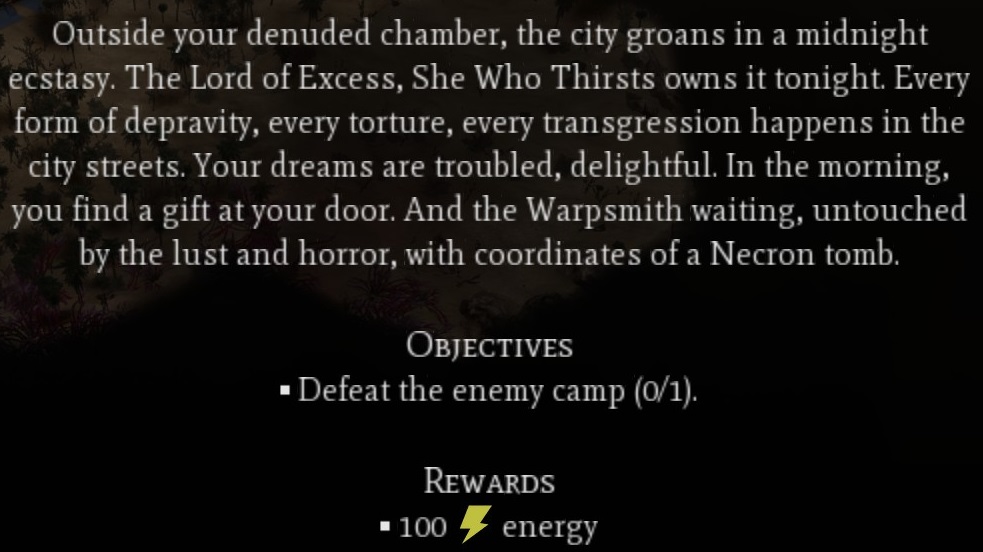 This will be the biggest fight yet…and honestly one of the large mobs of units I’ve ever seen spawn from a quest. I counted at least: 7 Doomsday Arks, 7 Triarch Praetorians, 3 Annihilation Barges, 6 Tomb Blades, 4 Heavy Destroyers, and 8 Necron Warriors. A substantial force to be sure. The fact that they will all spawn in 1 area can also be bad as it’ll put some hard pressure on whichever city they spawn next to. Thankfully you should have a lot of high tier units by now and you shouldn’t be in any real danger, as long as nobody else attacks you during this time. The next Chapter won’t cause anything to happen until you visit a certain tile with a Daemon Prince, but if you’re unlucky enough to have one standing on the required tile, it could throw you straight into another large battle. Be very careful at this stage. If the city is destroyed by you (or anyone else), it will complete Chapter 5, which can cause some awkward and dangerous positioning of the Chapter 6 enemies spawning if you still have a bunch of Necron units to defeat after the city dies. 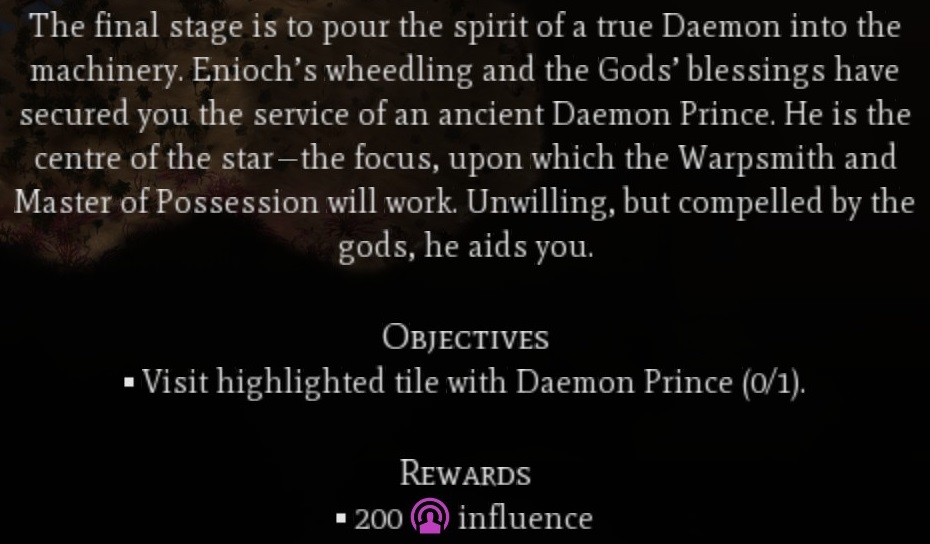 You’ll want to make sure you either have, or can produce and sacrifice 3 separate Cultist Squads nearby to where you need to send the Prince. You may want to produce them before hand to save yourself time. You may also want to unlock theVeterans of the Long Wartechnology as the enemies you’ll be fighting in the final assault are Space Marines.

This will be the final step before your last holdout. Make sure you’ve got all the Technology and units you want before proceeding here.

Here we are finally, an Invasion style attack. This means that every other turn 4-6 enemies will spawn in random locations around your cities. You’ll be facing Space Marine units, and any of their units can show up, so be prepared for anything. I saw a lot of Land Raiders and Terminators in my quest.

The final event is unique from the other races in that: 1.) You must keep your Prince alive, and he will be unable to move or act for the rest of the game. Make sure you’ve got units there that can fight and heal. 2.) You must take the 3 Cultist Squads to the marked locations and sacrifice them. This can be difficult depending on the enemy units that are spawning, and their positions. Be prepared to escort the Cultists if necessary. 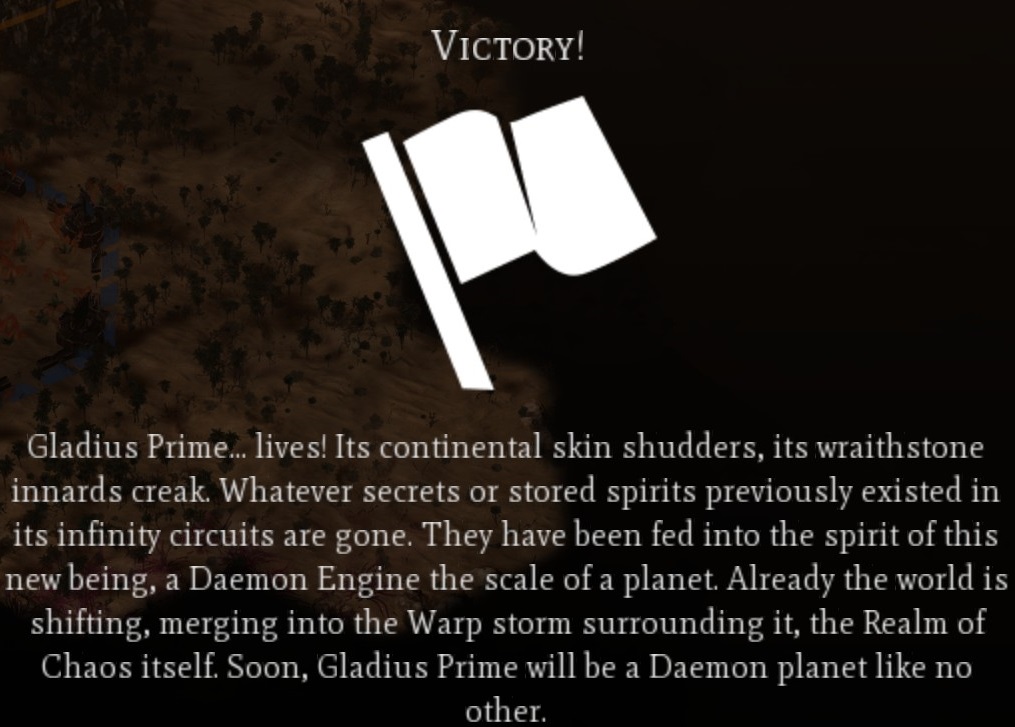 Here we come to an end for Warhammer 40 000: Gladius – Relics of War Gladius – Chaos Campaign Guide hope you enjoy it. If you think we forget something to include or we should make an update to the post let us know via comment, and we will fix it asap! Thanks and have a great day!