An advanced guide on playing VirtuaCreature quickly & efficiently, created by a dev!


I’ve created this guide as a sort of advanced walkthrough for players who know their way around the basic mechanics but feel like they’re missing something, whether that be the game feeling too slow-paced, their creature lacking in power, etc. VirtuaCreature can seem like a complicated or difficult game to manage on a first playthrough, but once you know your way around its mechanics, you’ll see that it’s fairly simple to play quickly and efficiently. Keep in mind this guide is aimed at people with some knowledge of the basic gameplay, so if you’ve never played at all before, some things here might not make sense.

Obtaining the specific creature you want for your playstyle should be the foundation of any run through the game. The evolution system works like a tree, with a couple different factors deciding what branch you land on.


The two main stats you must consider are Behavior and Taste, which can both be viewed on the Info & Moves screen.

These mechanics in tandem create four separate possible branches, which surprise surprise, each correlate with one of the major battle stats and type attached to every creature. So, what can each combination give you? 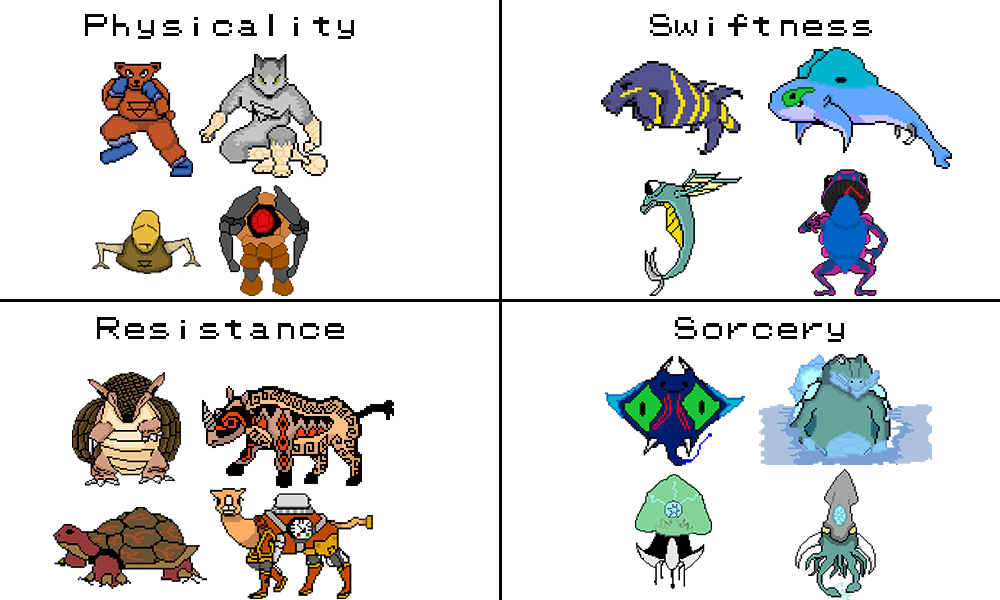 However, you may have noticed there are four creatures in each category, not two. How can this be possible? Well, there is one more stat to consider here, and it’s crucial: Happiness.


Happiness is the most difficult of these values to track. Generally, it will go down if you overfeed your creature or continually play minigames in one of the categories, and it will go up if you play a variety of minigames from both categories. Having a very unhappy creature will completely cripple it in battle, so as a rule, you’d usually want to keep this at maximum, right? Well, here’s where it gets a little tricky.


Within each of these evolution branches are two important sub-branches: Balanced and Niche. 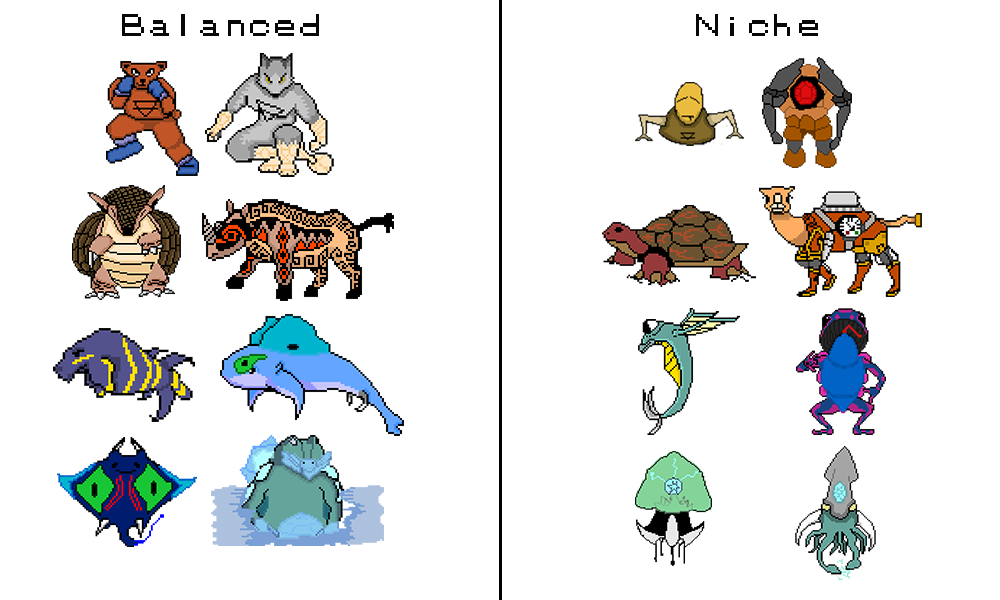 Speccing into one of these branches requires slightly attuning your happiness.

This is probably the hardest of the mechanics to figure out, so don’t worry if it takes a while. We promise the rest is easier!

So you’ve gotten your desired creature, and now you’re ready to optimize it. Well, the first part of that process is stat manipulation, or ensuring your creature has the numbers you want before you apply any type of boost. Unlike similar RPGs, there isn’t actually too much to consider here. Your stats are broken into three distinct pools:

It should also be noted that crafted items give a temporary 10% boost to its specific stat for 24 hours. Make sure to feed your creature one recipe before battles to take advantage of that extra juice!

Perhaps the most important factor towards your stat spread, equipment can be used to gain an immense advantage in a particular stat. All equipment is obtained through chests, which will give you a random piece with a general object type, color, and rarity. 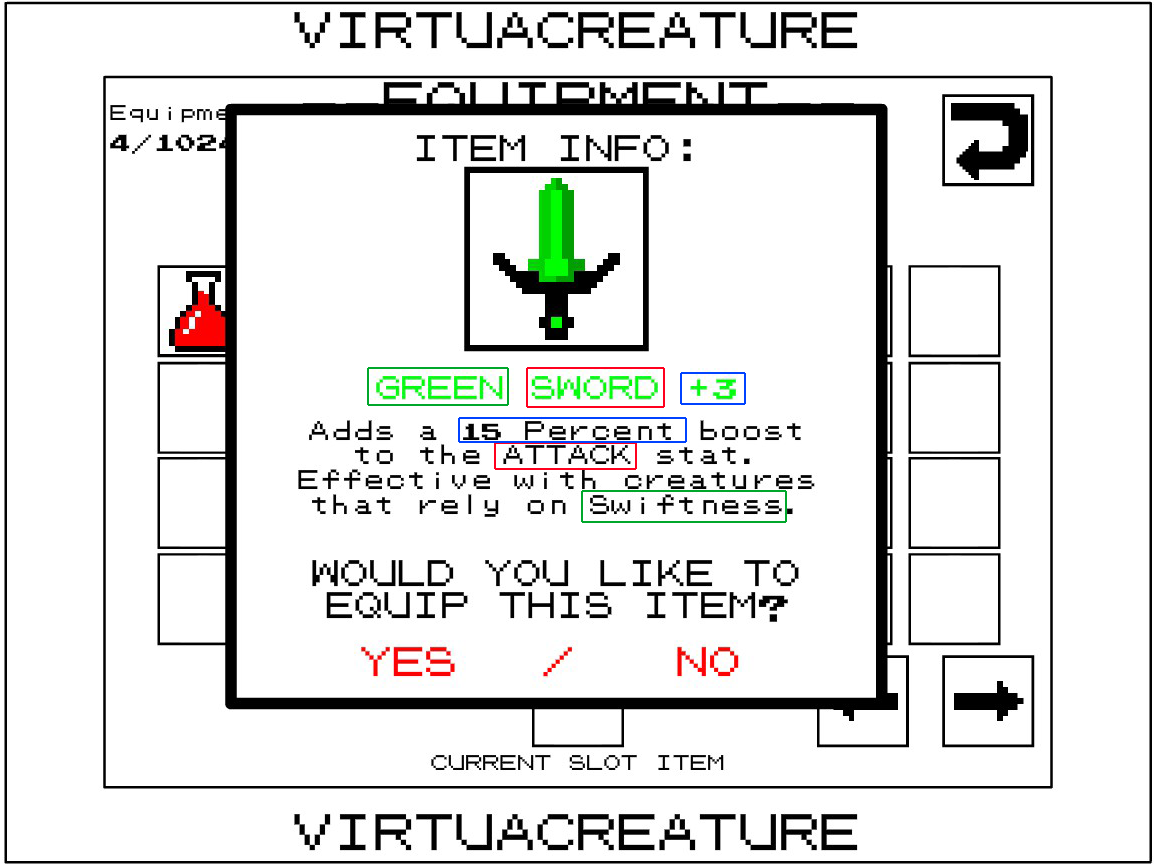 This is already a very potent system capable of increasing a stat by 30%. However, using equipment leveling, we can take this even further. Using colored gems called Synths, equipment can be leveled up to increase its potency, totaling in a possible 50% boost to a stat at the maximum level of 9.


Obtaining Synths can be a time-consuming process, so here’s a breakdown of each method: 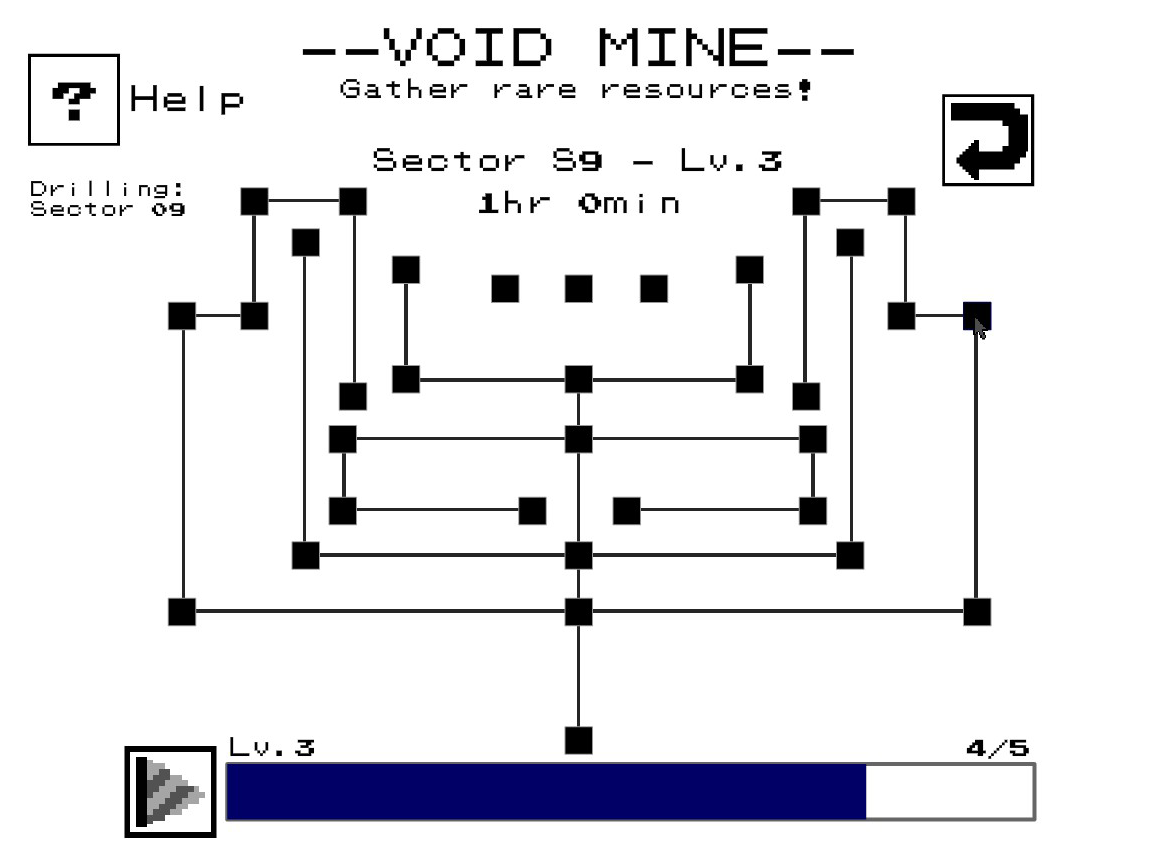 It should be noted that while Synths can be used to increase the rarity of equipment, it is very costly, so it’s better to use chests to guarantee +4 or +5. Once you’ve gotten your preferred piece of equipment finalized, you have to equip it.

While the default moves for your creature are likely alright, swapping them out can help specialize your role or give you the element of surprise over your opponent. Luckily, unlocking new moves is fairly simple! When you evolve into a new creature, you get all their moves unlocked permanently, and plenty more are available in the shop. While shopping, a prompt will tell you if the move you’re buying is incompatible with your current creature. 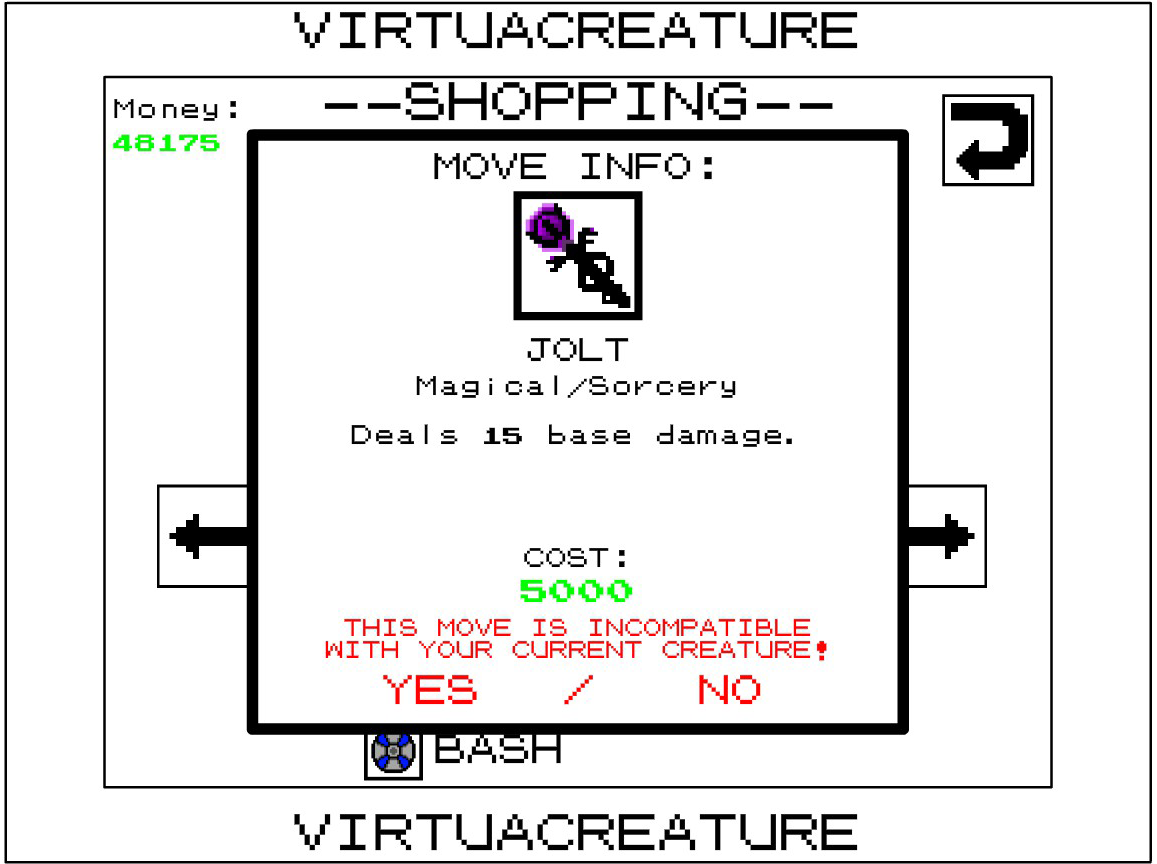 Once you have your moves picked out, simply head to the Info & Moves screen and you’ll see an option to swap each move out. Tada! 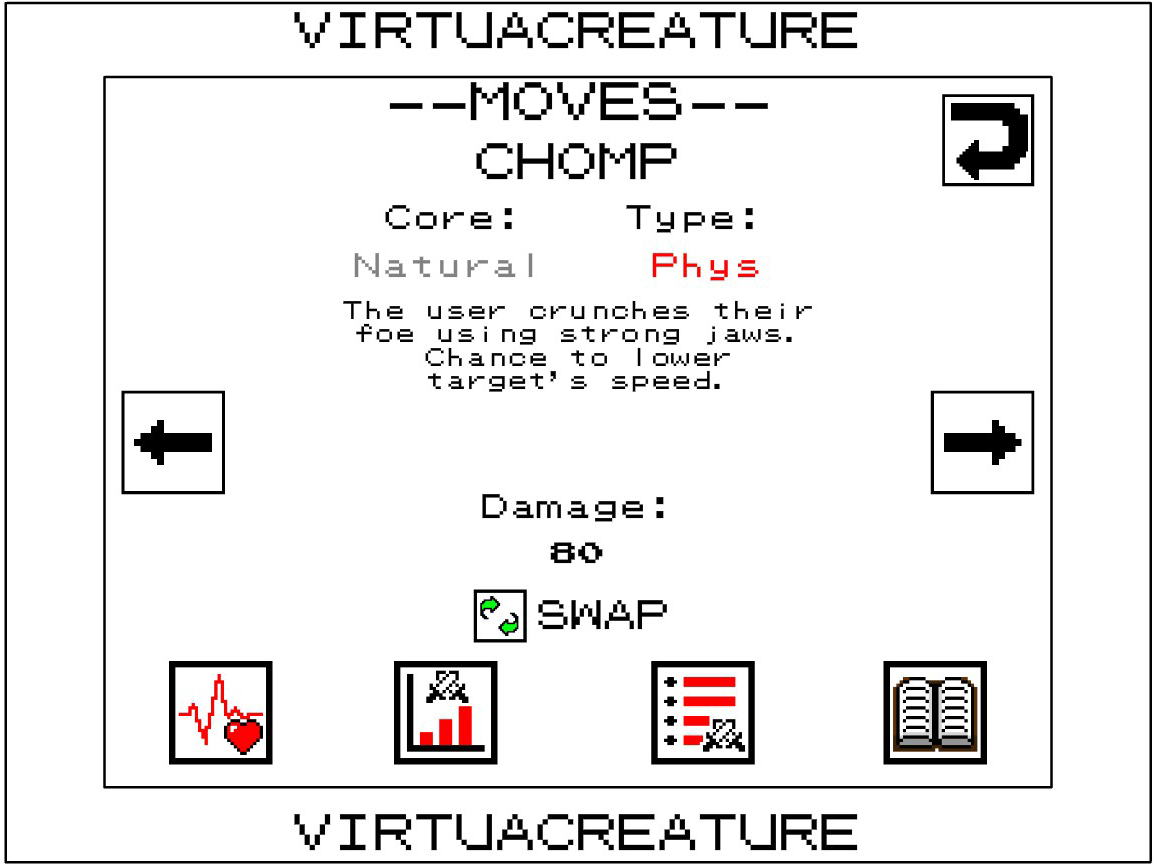 Now that you have your desired creature, your moves picked, and your equipment ready, are you at your maximum potential? Almost!


To demonstrate the importance of level scaling, here’s an example using a PvP match between two players. While your base stats will scale up to level 50, meaning you won’t be at an extreme disadvantage for being at a lower level, things like Level points and Mod points do not. To illustrate this difference: 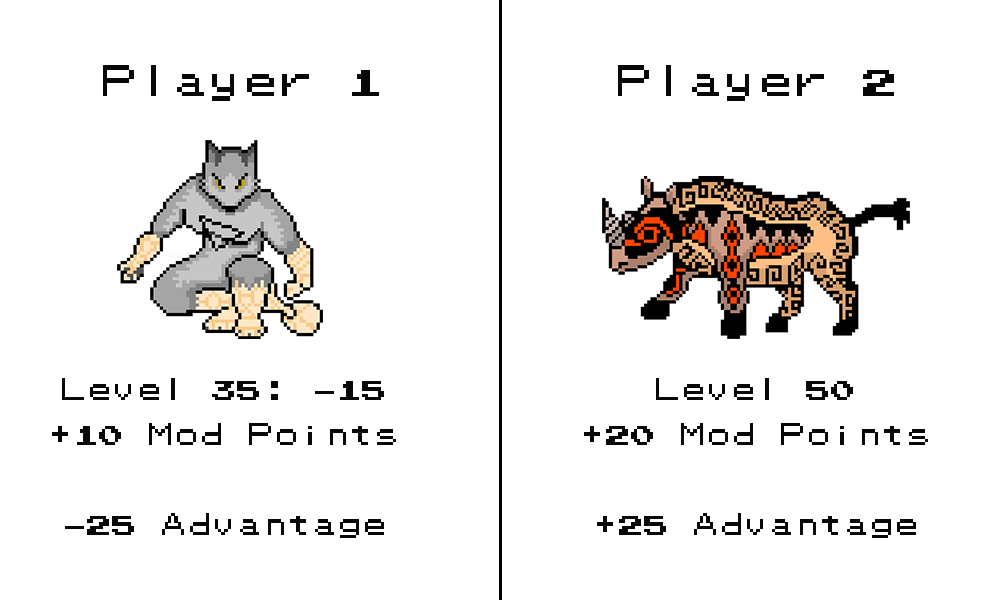 With single-player content, this effect is much worse, as your base stats will also be scaled differently, and you’re looking at tens or hundreds of points of difference. So, you want your creature as close to max level as possible, and with constantly depleting hunger in order to feed it recipes frequently. If you don’t know how to do this efficiently, you’re in for a long haul. Let’s go over how to gain levels quickly!

Minigames net very low amounts of XP and money, and overplaying them can lead to a shift in your evolutionary branch. Once you’ve evolved past Blob, aside from getting your required Behavior points or to restore Happiness, you should be focusing on other activities.

The Arena battle mechanics are incredibly simple, essentially just being a quiz on identifying creature types and their weaknesses, paired with some behind-the-scenes number crunching. This also makes them very easy, and a great source of XP. Some key points of your playthrough to keep this in mind:

You can sometimes earn temporary XP boosts through Daily Missions, or rarely by playing Versus Public or Co-op matches. These give you periods to efficiently level up whenever you have the time for a longer play session. Additionally, if you’re financially able, you can permanently double your XP by purchasing the Premium Upgrade – [steampowered.com] , which will also give you more slots if you want to raise multiple creatures for experimentation or variation in playstyle. Temporary boosts stack on top of the permanent one, so you can burn through levels incredibly fast if you’re diligent about when you use them.

I hope this guide has been helpful! I’m aware that VirtuaCreature is a niche game that plays sort of unusually sometimes, so my main goal here was to demonstrate that there are easy ways to get past feeling slow or stuck. It’s not for everyone, but maybe it can be for you 🙂

Here we come to an end for VirtuaCreature Gameplay Basics & Walkthrough hope you enjoy it. If you think we forget something to include or we should make an update to the post let us know via comment, and we will fix it asap! Thanks and have a great day!