Vagrus – The Riven Realms is to a large extent a party based RPG, yet you start without a party!

This guide addresses how to fill up your Companion roster.

The description of each companion also includes potential roles as a deputy or in crew combat. So in case you’re looking to fill a specific role asap, you would know who to go for.


There are of course spoilers related to the companions and how to get them, but not beyond that.


Regardless of what companions you get from Braxius, you can eventually hire all the Companions: 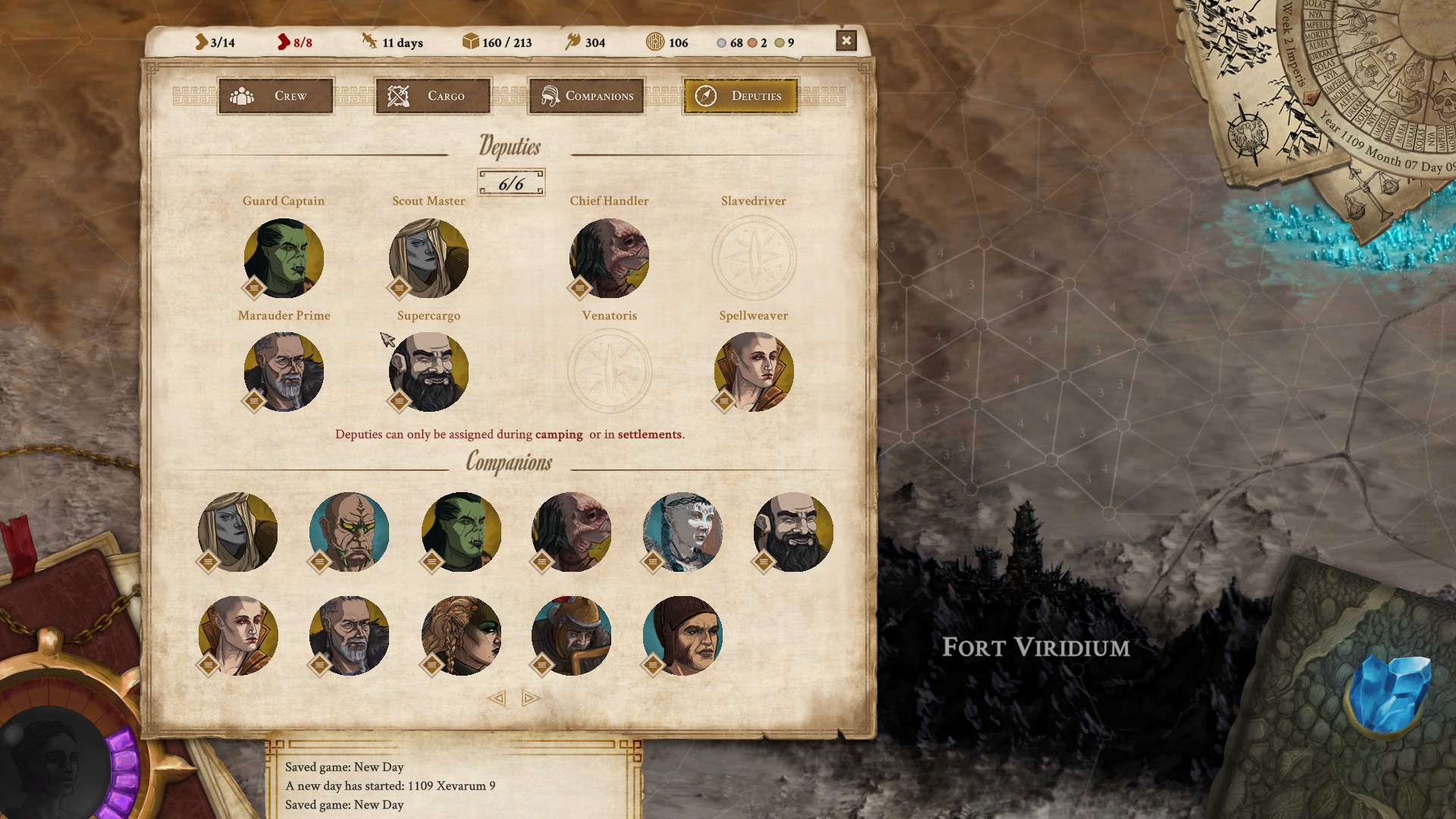 [This guide is up to date with the 1.0 full release]


Alternatively: Build up rep with Velarias(wraith Town just NE of Tor’Zag’s Shelter). I found the best way is to sell them 2-3 horses (mounts).

Once they like you enough the option in town dialogue will appear, telling you about a bounty hunter to the NE of Velarias. A very short distance from town (3 nodes to the NE) you get to help her fighting an orc and recruit her.


Alternatively, a rumor about a Bounty Hunter can lead you to her.


NB: You need to take her back to the Tor’Zag’s Shelter authorities relatively quickly so she can claim the bounty of the orc she was fighting. Failing that she’ll leave.


NB2: It is possible to recruit Finndurarth and Criftaa on the same trip and still make it back to the respective destinations they want to go in time.

It all depends on how mobile your comitatus is, so you should probably do a manual save after picking up Criftaa to be safe… or just get them one by one on different trips.

She can be recruited from Tectum Carvos. A camp a few days west of Larnak.


Be prepared for a relatively hard Companion Combat to enter Tectum Carvos. You should ideally have 4 other companions by the time you head there to recruit her.

(I wouldn’t leave getting her too late either, because the whole area starts swarming with a certain type of enemy at some point.)


For her to agree to join you, you only need to agree to start a quest in the same settlement.

You will stumble on an event involving her on your way to Deven from the south. Same as with Criftaa you will need to take her quickly somewhere otherwise she leaves (in her case Karnak Waystation). Once in Karnak be ready for a couple of companion fights.


Note: A part from Finndurarth the event involving her also rewards with a few valuable trade goods. Have a few open spots in the inventory to not lose out on that. 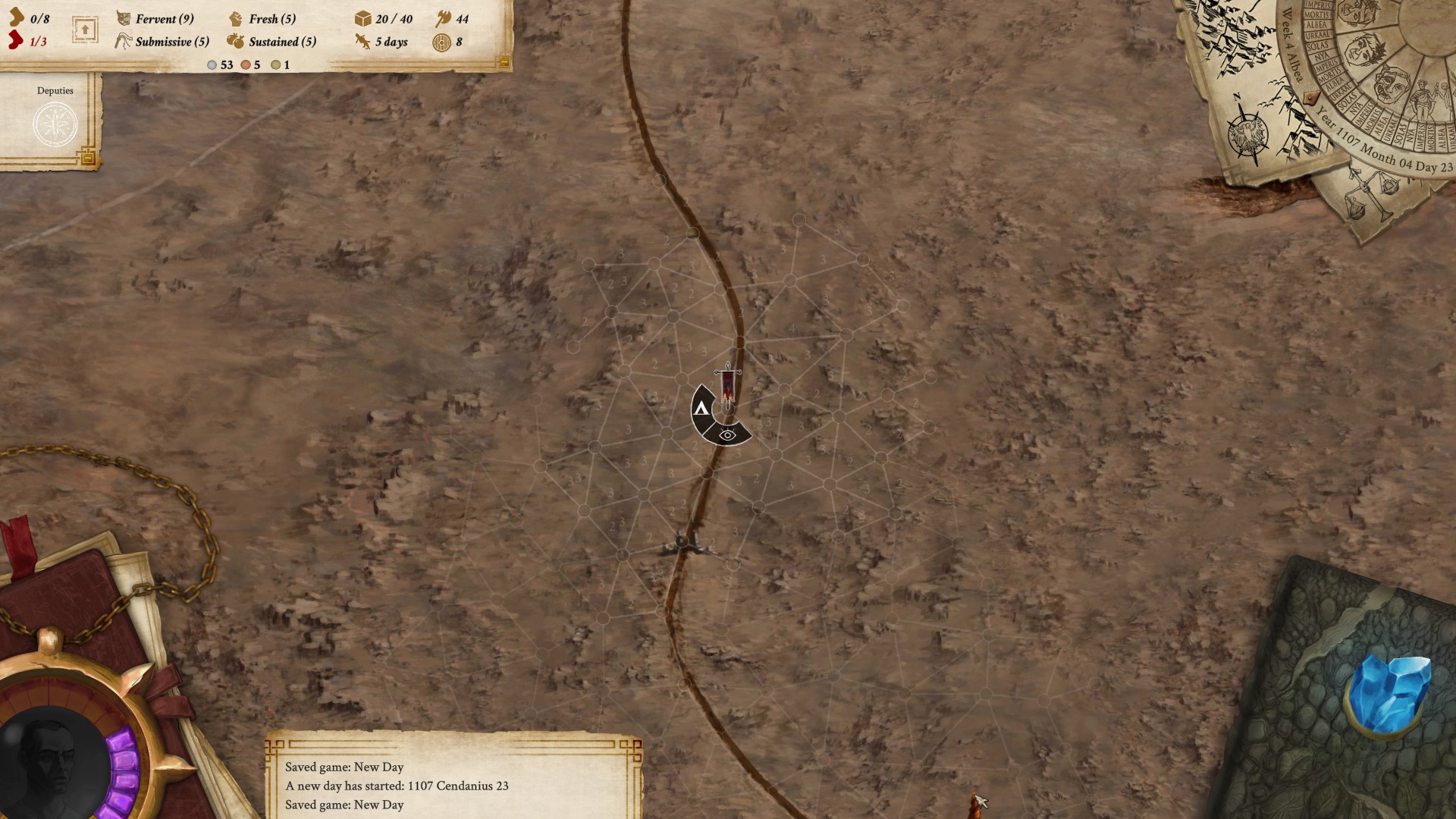 See screenshot for the location where Finndurarth’s event triggers. If you’re heading north to Deven for a trade trip better go off road and circumvent it, and take it on the way back South.


If you don’t you need to build up rep with the Loader’s Guild to Tier 1. They do offer a lot of delivery tasks from and around Tor’Zag’s Shelter so it is easy enough to build up. Once you have enough rep you can pay his debt (20 Bross) with the Loader guild: The option will appear in Undercity/Bath house.


NB: You can get Garrik first time you visit Tor’Zag’s Shelter, even if you don’t pick him from Braxius: You will need to chose Loader Criminal as background, and chose the (Loader) smuggling job when you leave Karnak. That way you will have the Loader reputation needed to get Garrik when you get there the first time. It will still set you back 20 Bross though.


NB2: [Unconfirmed by me] Reportedly even without the loader rep and Braxius: Garrik becomes recruitable through a Rumor a few months in. It is useful if you, for whatever reason, got on the bad side of the Loader’s Guild. (You will likely still need to pay off his debt)

He can be chosen from Braxius.


A rumor appears in Tor’Zag’s Shelter a few months later if you chose Garrik.


Regardless, getting him involves an Arena fight with Gor’Goro + 2 companions vs 3 opponents.


If you don’t have 2 companions (or choose not to use then) then you can get 2 NPCs to fight on Gor’Goro’s side, but only if you got the Gor’Goro from Braxius

She can be recruited at a Bar in Larnak.


Prequisite just seems to be having 3 Renown or hearing about her in the Venari HQ in the same town, specifically when you look at what Mercenaries they have to offer. (You will need to have enough house Venari reputation to allowed access to their HQ)


Another way to hear about her is to ask Incanus, a mage in Avernum, about recruitable mages.

Otherwise, become friends with the Dark Elf Prince in Deven (Rep required 6). You can do that by offering him the goods he likes (Obsidian, metal, tools, Luxury wine), you can also get a boost to the rep with him if you dedicate the victory in the Arena of Deven to him. Once the rep is high enough with the Prince, Renkailon becomes available.


Renkailon is arguably the hardest one to get. So if you get him from Braxius, you’re lucky.

Available in Avernum. You will need high rep with the Prefectus there. One way to get high rep is to help him when you first interact with him during the Pandemenum Arena event.


If the Prefectus was not saved by you at the arena event involving Skornar, the only way to draw his attention is to have high Renown (9 to be exact). From then on, you can raise your reputation with him and eventually press him for Skornar.

Sword and board frontline tank.


Depending on the hireling, they can also be assigned different deputy roles, if for whatever reason you don’t have the Companion for a given role.

(Prices can be reduced if you want to invest rep points)

1 month after hiring them, the contract can be renewed for a second month.

The contract can also be renewed for a third month in the field for an additional cost.

After that they leave, and will need to be re-hired in the respective settlements.


It is safe to equip them with 2 items: They do not leave with the equipped items.

The guide lists the Companions alphabetically.


Here is one good order of getting them asap as a walkthrough.

(If you didn’t get Renkailon from Braxius, this would be slightly different. Be ready to give the Prince in Deven something he likes every time you go there even the first time. As soon as you have 6 companions try doing the Arena event in Deven, and dedicate the victory to the Prince)

Hope you enjoy the post for Vagrus – The Riven Realms General Guide + Classes + Recruitment + Deputy Role Guide, If you think we should update the post or something is wrong please let us know via comment and we will fix it how fast as possible! Thank you and have a great day!