A simple guide to Cathay and the Northern Provinces. 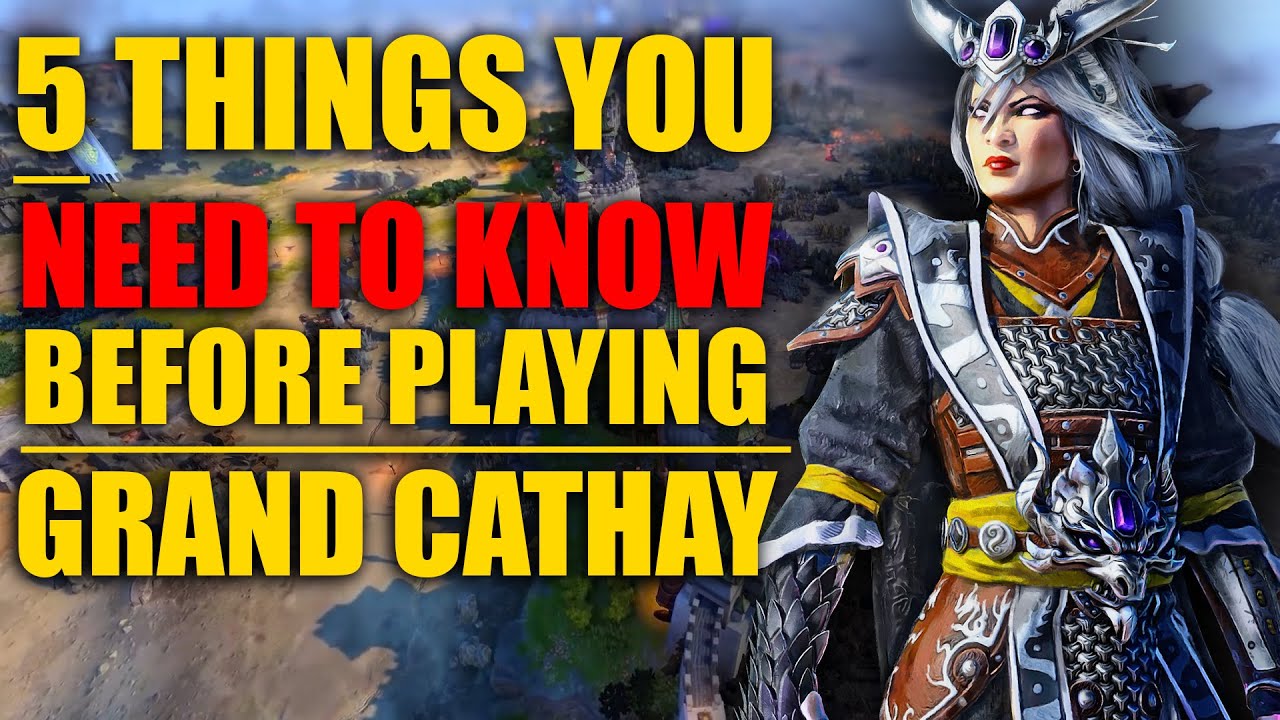 Grand Cathay is a land of contradictions, as many of its gameplay mechanics will reveal. Let’s take a look at the geography of our faction, the Northern Provinces first, and get an overview of our political situation. Our capital city of Nan-Gau sits at the southern border of the Great Bastion, and is in the beginning the only city under our command. We begin with our army lead by Miao-Yang, and are tasked with defeating a nearby force, but to conquer nearby settlements and resettle the collapsed section of the Great Bastion called Snake Gate.


Each faction in Warhammer III belongs to an overarching faction. In our case, the northern provinces belong to the Grand Cathay faction, and as you can see, we’re not all getting along. About half of the subfactions, namely the Celestial Loyalists and the Imperial Wardens are our friends, while the other lords have gone rogue and are actively fighting us for supremacy of the land. As the Northern Provinces, this means that you need to balance these relationships. You can only hope to handle the southern rogue cathay states if you are allied with the ones to the north, as they will provide a natural shield to monster incursions coming from that direction. Your best option here is to cultivate these relationships. This is why securing your northern borders should be your first task, as neighboring allies is always a good position to be in.


This includes recapturing Snake Gate, our only real way to ensure our own safety. Just remember to bring a massive force as we need to completely repopulate this razed city, meaning a large chunk of our army is used to repopulate it. Another reason is because you’re likely to be invaded shortly after, as armies from beyond the wall are never far away.


Having dispatched of our nearest enemies and linked up with our allies in the north will give us some much needed breathing room for the time being, and this is when you can really begin to think about expanding southward and deal with the rebellious lords of Cathay. Remember to remain on good terms with your allies though, because even though we wont forcefully take their settlements, having good relations will make it possible to confederate with them later, essentially annexing them and creating one Grand Cathay.


Since we’ve been talking so much about bolstering our defences, let’s take a look at the Great Bastion itself. The Great Bastion serves as our main defence westward, but even though it stretches from south to north, only parts of this wall may be attacked at any given time. These are known as gates, and there are three of them in total. These are Snake Gate, where you’re in control, Dragon Gate, and Turtle Gate, both of which are held by the Imperial Wardens. Not only are these settlements in and of themselves, but they only allow for the building of special buildings whose purpose is to maintain the gate and the armies stationed there. For example, a Bastion Barracks will significantly reduce the upkeep cost for your armies in the city, and a Lumber Pile will net you much needed defensive supplies and more ammunition for your ranged units in the province.


A unique mechanic has also been added and relates to the maintenance of the Bastion, namely the Great Bastion Threat meter. This meter shows us that chaos invasions are inevitable and will arrive, but at what pace is determined by who controls the gates themselves. When the gates are destroyed, more invasions will happen, and the opposite is true for when they are maintained by Cathay factions. When invasions occur however, chaos come forth at a much faster rate than before, and it’s up to you to make sure your defenses are ready for when that happens. Once the invasion is kept at bay, the meter resets, and even though enemies will stay assault the gates, you’ll have some breathing space before the next major invasion forces arrive. The Bastion Gates are luckily heavily fortified walls and a powerful garrison, and as long as you can take advantage of that, you’re might just succeed in keeping the enemy on the other side of the wall.


Another one of Cathay’s main mechanics is the all-important harmony system, which has a major impact on both the campaign and battle systems. In the campaign, harmony is defined as the balance of yin and yang. Achieving harmony means that you’ll get substantial bonuses to your faction such as massive reductions in construction costs, huge boosts to your diplomatic relations with Cathay factions, more control over your area and a boost to income. However, should your yin or yang unbalance the scales, these buffs will be lost and replaced my bonuses featuring only yin or only yang buildings. Almost every building you can construct as Cathay will belong to either yin or yang, so building one of these will tip the scales on point towards the chosen side. In addition, technology, characters and events also influence harmony, and if you wish to gain all the best bonuses, you’ll absolutely need to pay attention here. Every one of these let’s you know which side they belong to, and each army will further tell you which side their general favors.


Where it does matter though, is on the battlefield. You see, when yin and yang units fight apart from one another, they fight like normal. But when they’re closer together, they each receive a battle harmony bonus which can really sway the tides of battle. Again, the campaign harmony mechanic has no effect on the battle harmony mechanic. But individually, the campaign has you balance yin and yang to achieve faction bonuses, and the battles have you position units near each other to strengthen both at the same time.


Next up is the Wu Xing compass. Perhaps rather complex-looking to begin with, the compass is important to understand as it provides you with powerful bonuses depending on your needs. The compass is divided in four, each focusing on a different part of your campaign. The Great Bastion focuses on maintaining your armies, the Celestial Lake maintains boosts your economy and growth, Dragon Emperor’s Wrath improves your control or public order, and Warpstone Desert lowers corruption but lowers your winds of magic reserves. By pointing the needle in the varying directions, you are essentially filling them up with magic over time, making the effects active until they are lowered again. It is up to you to find a balance here.


The last of the Cathay exclusive features are related to finance, namely the Ivory Road mechanic. Here we have to opportunity to send large caravans of goods to other parts of the world. There’s a unique ivory road map where you get to choose where to send your goods, and once decided, your caravans will begin the journey there and back again. There are more to be aware of though. You pay a lump sum at the beginning of the journey in order to get more back later, and the further away you travel, the more money will eventually return to you. Just be aware that your caravan might be attack on its way, which makes it all the more important to pay attention to the caravan leaders skill tree, which allows you to lower their level of ambush rates.


Whether we’re talking buildings, armies, units, compasses or caravans then, Cathay is all about balance and finding the equilibrium in all things, and is in large part what separates them from the rest. And if you can find the balance between attack and defense, ranged and melee, yin and yang, then I have no doubt you can go a long way with Cathay and the Northern Provinces.

Here we come to an end for Total War: WARHAMMER III Walkthrough Gameplay Video Guide hope you enjoy it. If you think we forget something to include or we should make an update to the post let us know via comment, and we will fix it asap! Thanks and have a great day!