A new players guide to trying out a barbarian faction.

In addition it lists the Britannia faction specific achievements.

This guide details a strategy for the Britannia faction in Rome Total War Remastered.

I trialled this strategy on Easy and Medium difficulty and plan to provide an update when I repeat it on Hard and beyond.

My hope is that this guide will provide new players a starting point for playing a minor faction, It’s assumed anyone following this guide has already done a play through as one of the Roman factions which can be considered better for a tutorial.

I decided to write this Guide on the Britannia faction as they start of with a solid naturally defended position on the Island of Britain, meaning there is only one territory that can be attacked on mainland Europe, but equally this territory is a great launching point for further expansion.

If you have any alternative strategies please feel free to leave them in the comments and I may mark up a section and credit you.

This is considered a Barbarian faction, which effects the unit and building types.

Territory:
You begin the campaign with three settlements across the British isles, Londinium, Deva and Eburacum.

Faction relations:
You start with no allies or enemies.

Units:
Your standard infantry are Spearmen, fairly good at holding a line and resisting a charge but poor moral and may attack nearby units on their own.

Many of your Generals will be on light chariots. Be very careful engaging the enemy, even if flanking with these they have a tendency to break upon contact with anything stronger than a light breeze.

Light chariot (missiles) are brilliant, fast and ranged units. While not especially powerful, having one unit of these kite the enemy cavalry / General around while slowly picking them off can be a game changer compared to receiving a their charges.

Woad Warriors are a faction specific unit, unlocked through a temple. They are slightly better than your standard sword or spear infantry, especially good at hiding and moving fast but very weak to ranged units.

Notable Buildings:
Tavern, this is instead of arena’s and provides a base happiness increase.

Temples to Andraste, gives you access to the Woad Warrior unit.

Goal:
Control / own 15 territories and defeat or outlast the Gaul faction.

Strategy:
1. Take nearby rebel settlements
2. Attack Germania to build up strength
3. Turn on Gaul as the Julii begin to attack them

This turn we want to get our troops on the boat and get our second army moving to the south of England while setting up our towns.

Actions
Move your boat slightly across the channel so the army outside Samarobriva can board then move it near Londinium and have your Spy and all the troops in the city bar 1 also join. Your boat should be out of moves so will head off next turn.

Move your second army in Wales towards Londinium along with all other troops in Deva and Eburacum leaving one peasant unit in each of the towns. They should arrive next turn but won’t be joining on the boat.

Have your Diplomat head West along the coast to Gaul, aim just North of the Glass resource tile as it is close to a Gaulic town.

Building
We have a real population issue in 3/4 of our territories and need to fix that up.
Deva, Eburacum and Samarobriva have low populations so have them all undertake Land Clearance, start on the Port for Londinium.

Recruitment:
Recruit spearmen in Londinium and Samarobriva, nothing in Deva and Eburacum for now.

Taxes:
If your on easy or normal you can safely up your taxes for all territories, but remember high taxes impact population growth; so best leaving Deva and Eburacum as normal taxes for now. General tip always try to keep happiness above 100, lowering taxes can be a great way to do that.

End turn notes:
If Germania tries to get any kind of treaty with you decline and counter propose you trade map info but nothing more as this will help in the upcoming war.
Any other faction you can accept trade and map info, maybe even alliance if you want to risk it but don’t pay for anything, where a faction is willing to make a trade deal or swap map info see if they will pay you a few hundred gold, every little helps early game.

This turn we want to start moving our fleet towards modern day Denmark, consolidate our armies in the south of Britannia and make a deal with Gaul. 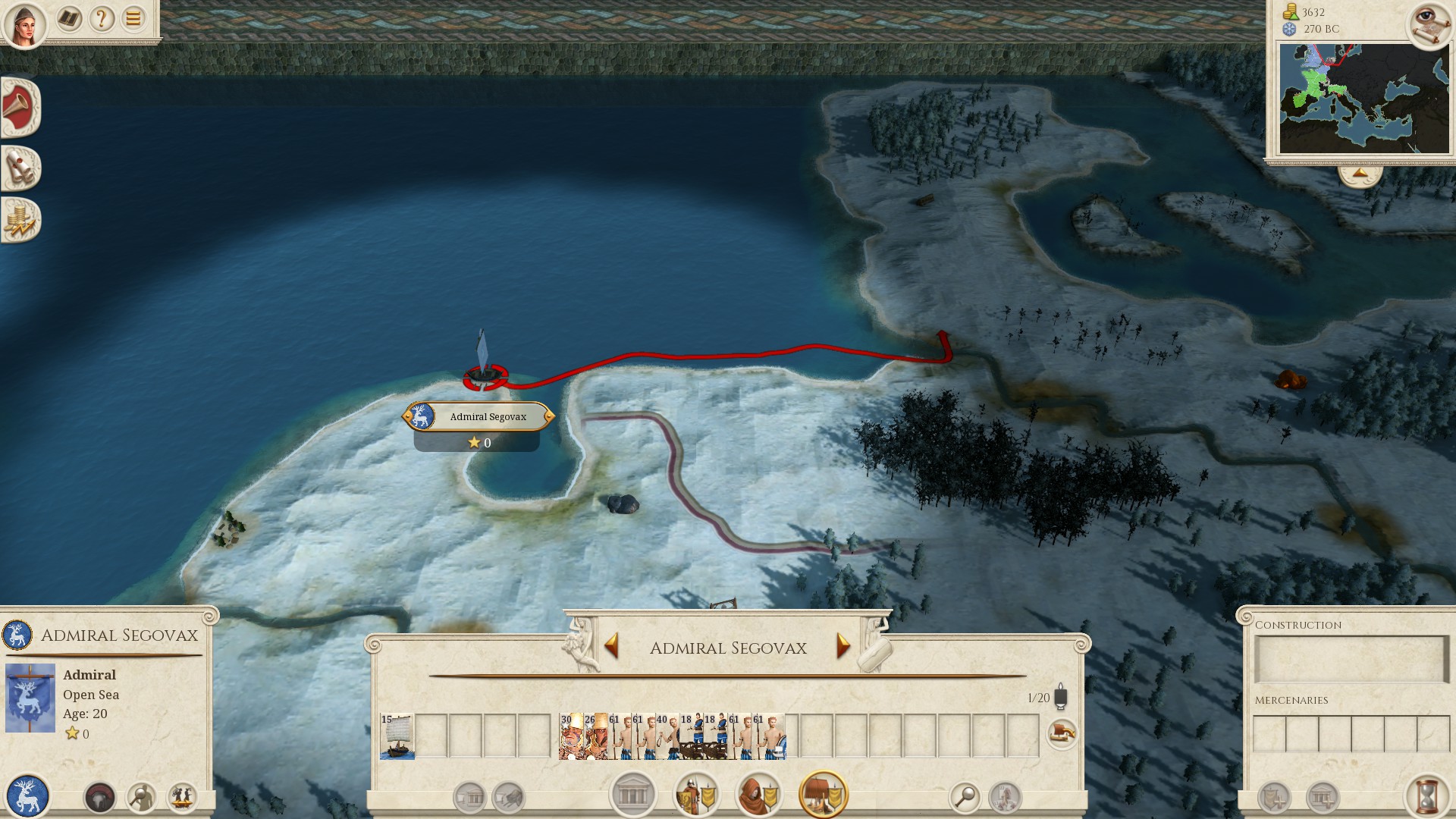 Move your fleet to the north east toward Modern day Denmark, we are aiming for a currently unseen rebel settlement called Bordesholm, on the map look for the landing site at the mouth of a river into the North sea, it’s just north of that.

Continue to have your troops in Brittania move to the Port of Londinium.

This turn your merchant should reach Condate Redonum the Gaulic town. Our goal for this deal is:

You may ask, ‘But we need to defeat Gaul?’ yes we do, but currently they are too powerful. Getting an alliance stops them immediately attacking us and gives is a heads up when they do plan to attack as they will break of the alliance before hand.

Building:
Nothing should be complete yet.

Recruitment:
Que up another spearmen in both Londinium and Samarobriva.

End turn notes:
Again decline any treaty with Germania and accept most any with another faction.

This turn we are going to take the rebel settlement Bordesholm

Actions:
Move your fleet to their destination as denoted in the image from turn 2. First move your spy into Bordesholm for the extra xp, then your army should have enough movement to attack straight away. In all my games they haven’t built a wall yet allowing me to walk in stomp 2 spear units and take the settlement (either occupy or enslave).

With your fleets remaining movement head back to Londinium and start to move your spy south to scout out the location of all Germanias towns.

Move your diplomat south toward Spain, if you find another factions diplomat on the way true to trade map info and get trade rights.

Building:
Everything should now be complete, have Deva, Eburacum and Bordesholm make Trader, while Samabriva makes the Shrine to Adnraste. As you can see we are still focusing on increasing Population.
If you have enough Money also make a Trader in Londinium.

Recruitment:
Recruit a boat in Londinium, that’s all for this turn.

This turn we are going to move troops to take Ireland and begin the war with Germania.

Actions:
Load the waiting army (4 spearmen and 1 slinger) and a General in Londinium onto your new ship and sail it round to Ireland (safety strat would be to wait 1 more turn for your 3rd boat to be built). Keep the other General and druids there for now.

At this point a Germanian army usually appears coming up to Bordesholm, attack with all your units bar the most injured which you should leave back in town to keep up happiness. It should be a fairly easy victory, continue moving this army south and your spy to locate the closest town.

Keep your diplomat going to span and fleet back to Britannia.

Building
Make a Road in Sarambriva and if you didn’t last turn start make a Trader in Londinium.

Recruitment
Boat unit in Londinium and Woad Warriors in Sarambriva.

Press the advantage against Germania and continue on our way to Ireland. 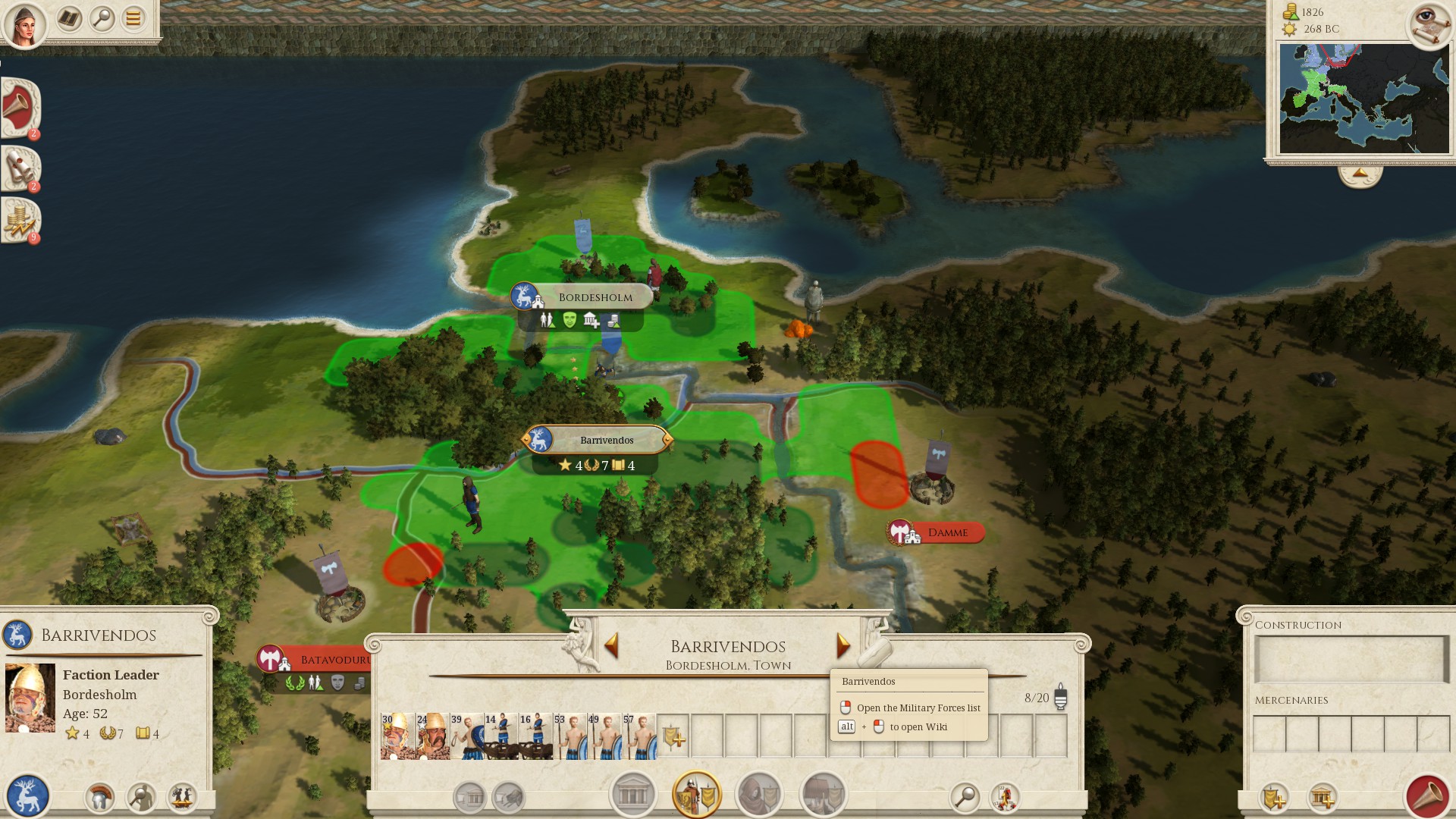 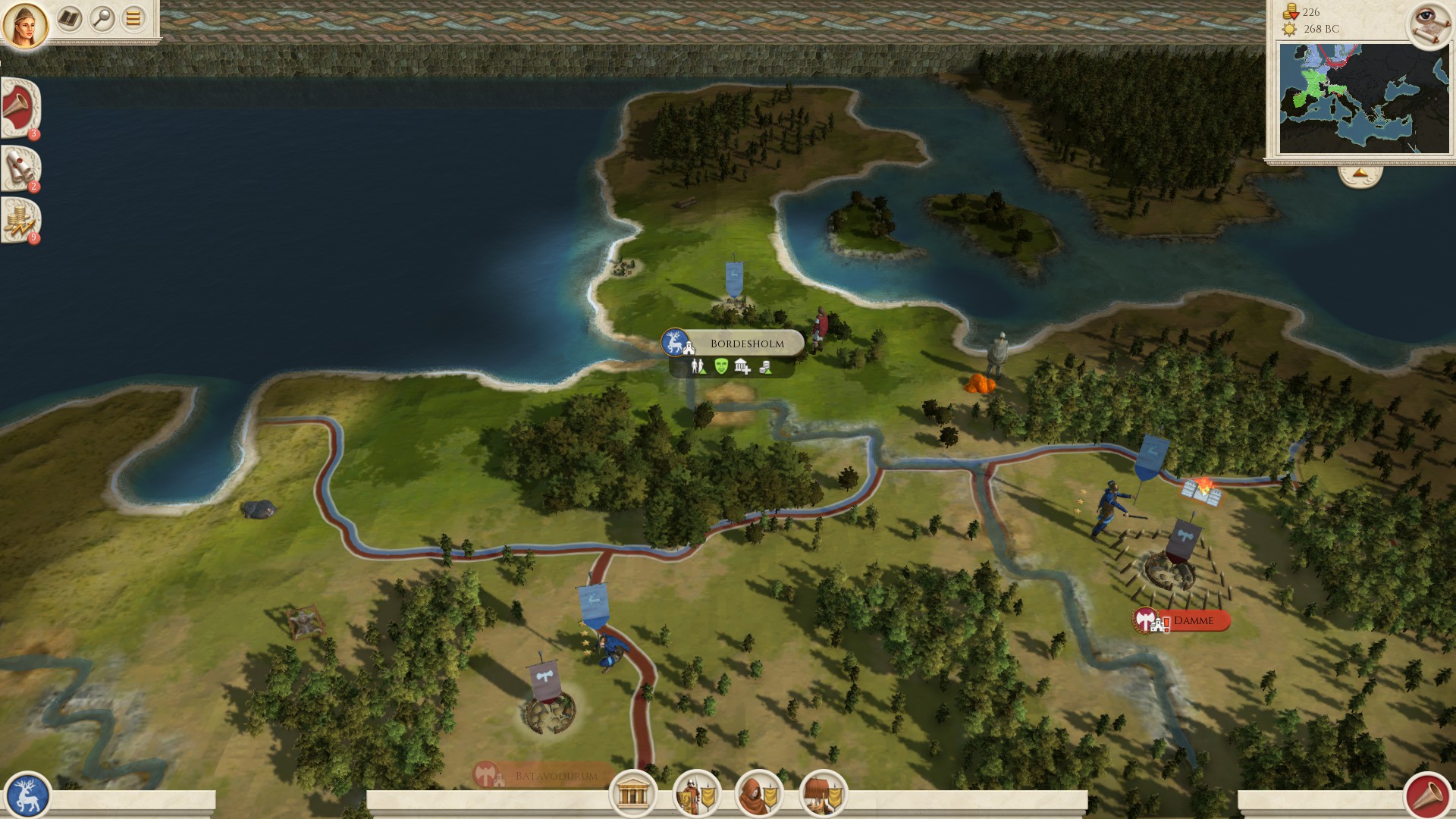 Your Northern army should be able to attack either Damme or Batavodurum (this one may be slightly out of reach), you can choose either one and besiege it or if you are confident split your army to have a General in each and go for both. You can always supplement these armies with a mercenaries if need be.

The first fleet should be back at Brittania, load it up with all the troops and any Governor / General in Londinium (leaving one troop in the city) and drop them off across the channel.

Building:
Really depends if you splurged on Mercenaries or not but Roads and Temples are a good next buy for your Brittania settlements, pick your favourite.

Recruitment:
Again if you got mercenaries you or buildings you likely won’t have enough cash and but more spearmen and woad warriors can be good.

This is where i’ll leave the step by step as stuff really starts to change from here. I’ve had Gaul break alliance and immediately declare war, Germania roll over and die or put up massive resistance.

Next few turns
You should be able to move your troops to Ireland and take that rebel settlement; once taken focus on it’s population growth. Be aware sometimes they have sailed out a two stack of ships by this point, if this is the case disembark your army and combine your two fleets before facing them.

You have two armies now (if a bit small) one either side of Germania, pincer them in and conquer territory bringing you much needed population and money, also counting toward the victory condition of holding 15 settlements.

Further down the line
Once your satisfied with your conquest in Germania or forced to fight by Gaul, turn your armies and start taking their territories. Hopefully by this point the Julii will have gotten their stuff in order and be starting to occupy Gaul in northern Italy.

If your conquest in Germania went well you may reach some of the Gauls north Italian towns before the Julii take them, always fun to steal a few more territories.

Diplomat:
Have them get deals with Spain, then move them over to Rome and make deals with every diplomat you can find as many factions congregate their. As ever try to get map info and trade deals and make them pay you for them.
For further away factions such as Egypt / Carthage / Numidia that you won’t actually encounter in this short campaign try to sell them your map info for some quick and easy money.

Spy:
Where possible move them into a settlement ahead of an attack, it get’s them more xp and has a chance the battle starts with the gates open.

Merchants:
If you are playing with merchants on I’d typically put them to auto manage, for such a short campaign I wouldn’t bother with them much.

Buildings:
Aim to get all towns over the 2000 population mark initially through building stuff that increases population growth, once your at that point they can branch out into trade and army creation.

Recruitment:
Throughout this short campaign you are going to be stuck with your Spearmen and Slingers, but try to get a few woad warriors and missile chariots in each army too.
Personally I favour the Mercenary cavalry over the barbarian light chariot so when i can I will splurge on one or two of these.

For recruiting, once a settlement has reached over 2000 population feel free to start using it for recruiting, prior to that just leave it to grow and try not to go back under the 2k.

I’m adding this as I slipped up here.

Make sure to destroy the faction, which means defeat all armies and take all territories.

If you make them a protectorate it doesn’t count as victory.

Here we come to an end for Total War: ROME REMASTERED Britannia short campaign Guide hope you enjoy it. If you think we forget something to include or we should make an update to the post let us know via comment, and we will fix it asap! Thanks and have a great day!