A comprehensible guide covering all 33 achievements in Thief Simulator.

Debt Free Man and “A What?”


This achievement is unlocked upon completing the game’s storyline.

Buy a cloaking device on Ng+


Upon reaching Ng+ after beating the game, purchase the Cloaking Device on the Tools4Thieves website, for $150000.


Those achievements will come naturally as you play the game, with close to no need for farming. Just make sure you fill your backpack with stuff every time you rob a house or do a job.


Most of your valuable steals will come from Richie R. St., small but valuable items are best, since you can carry a lot of them.


Those are the items you’ll want to keep an eye out for:

Note 1: money gained from jobs regarding breaking something does not count towards those achievements.


Note 2: you can often sell items for higher prices on BlackBay, at your computer.


To achieve an S rank on a theft, you need to steal at least some items without being detected by anyone, this includes tenants, street bypassers, security guards and potentially police officers, as well as security cameras and alarms. The more money you steal in items, the higher your chances of getting an S rank are. Note that stealing items you’ve never stole before might increase the likelyhood of a perfect rank as well.


Note: rank is calculated after exiting the map’s borders, either by vehicle or on foot.


Control panels are those locks where you need to connect two ends of the panel in order to unlock a door or gate. Only unlockable after acquiring the Hacking PDA. Control Panels are found on almost every residence in Richie R.


Those three achievements require you to destroy 10 windows, toilets and dishes respectively with your crowbar. Those items can be found in every household in the game, just beware that the noise of you breaking those items will alert nearby people.


Note: the easiest place to farm for those achievements is the very first place you rob, during the tutorial, as the place is always unguarded and has 1 set of dishes, 1 toilet and several windows.

Break a window with a brick


Throw a brick at any window to destroy it.


The following image of Greenview St. was taken from the Thief Simulator Wiki: 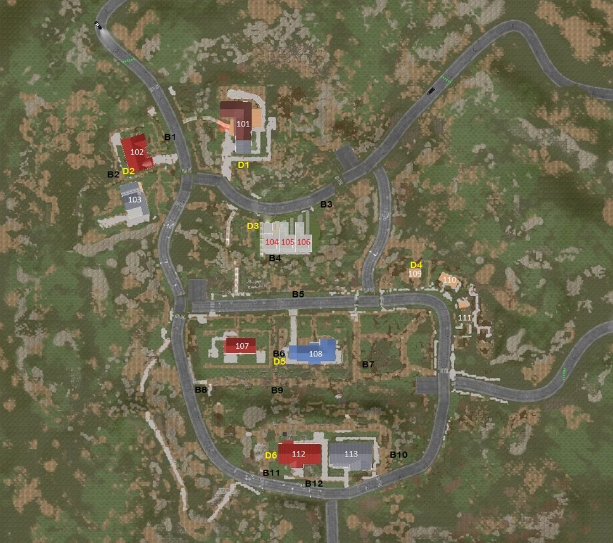 
Just steal a total of 10 toasters cummulatively. Both “Toaster” and “Old Toaster” count for this. Here’s a list of every location where you can find a toaster:

Note: toasters tend to be found in kitchens and sometimes in garages.

Too much TV is bad for you


There are 4 TV variations in the game, all of them count towards this achievement. Note that all TV variations require your car’s trunk to be stolen. Here’s a list of every location that has at least one type of TV:

Note: TVs are usually found in living rooms and bedrooms.


There are a total of 33 different paintings in the game, all of them count towards this achievement. Note that this refers only to paintings that can be found hanging on walls. Here’s a list of every location that has at least one painting:


There are 2 console variations, the “Video Game” console and the “XCube” console, both of them count towards the achievement. Here’s a list of all locations that have at least one of the two types of consoles:

Note: consoles are usually found in living rooms and bedrooms.

Note: Santa’s Sleigh will be covered in the section regarding Christmas achievements.


To earn this achievement, you need to steal a total of 5 cars, ideally the ones mentioned above for the Car enthusiast achievements. There is another car you can steal, the orange Vulcan Specter, in Industrial St. 304, but this one doesn’t have any achievement specifically tied to it.


This vehicle can be found out in the open, in Industrial St. 305 (Construction Site) and does not require any special tools to steal. There is a ramp near the Skid Loader, which allows you to exit the construction site more easily. 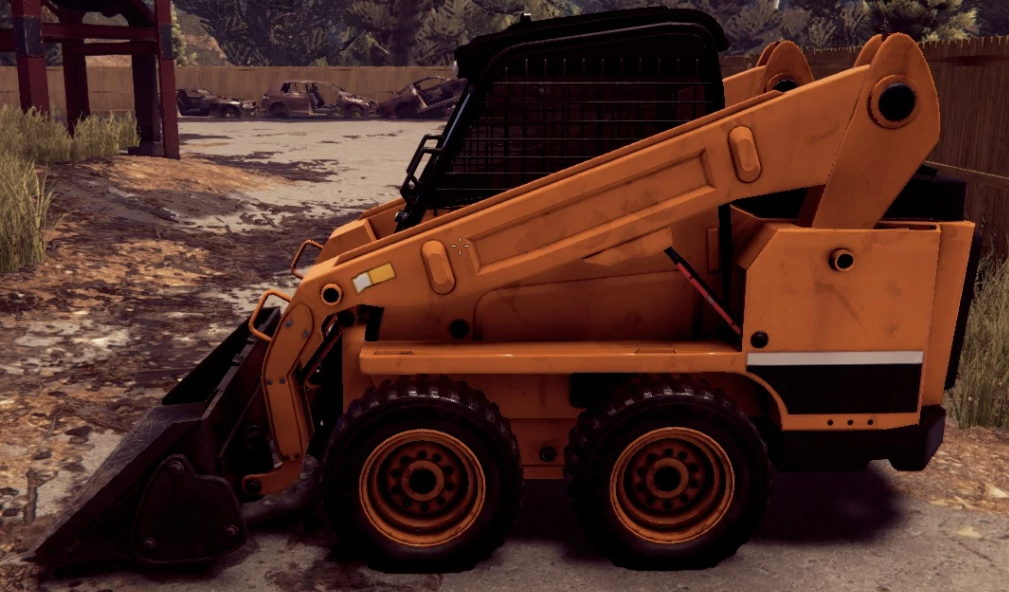 
This vehicle can be found out in the open, in Industrial St. 305 (Construction Site) and does not require any special tools to steal. To steal this one, you’ll have to carefully navigate around security in order to get it out of the construction site. 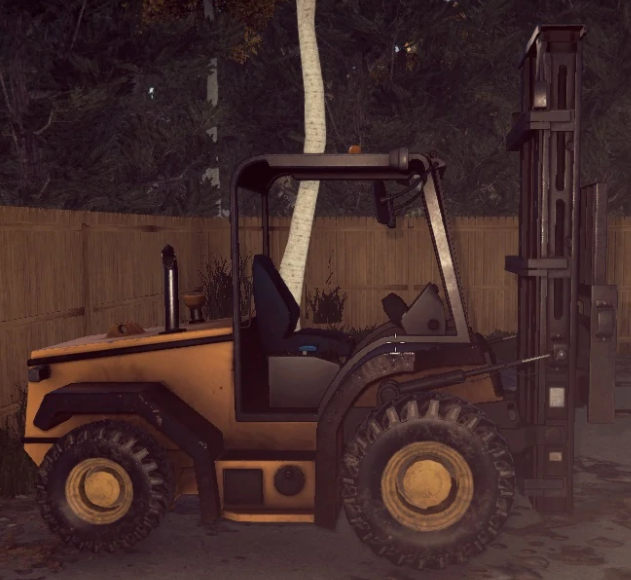 
Steal all 5 Faberge Egg replicas. You don’t need to collect all eggs in one go.


The eggs are on the following locations: 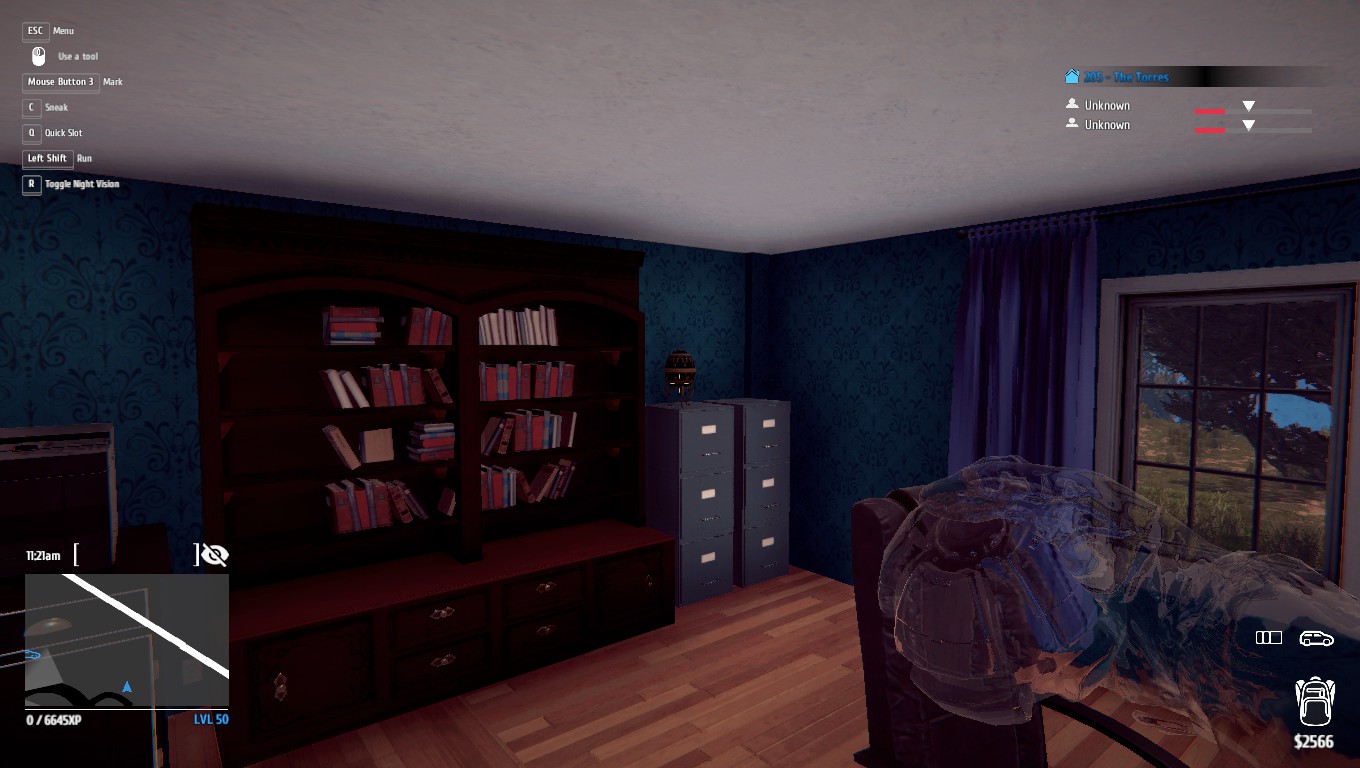 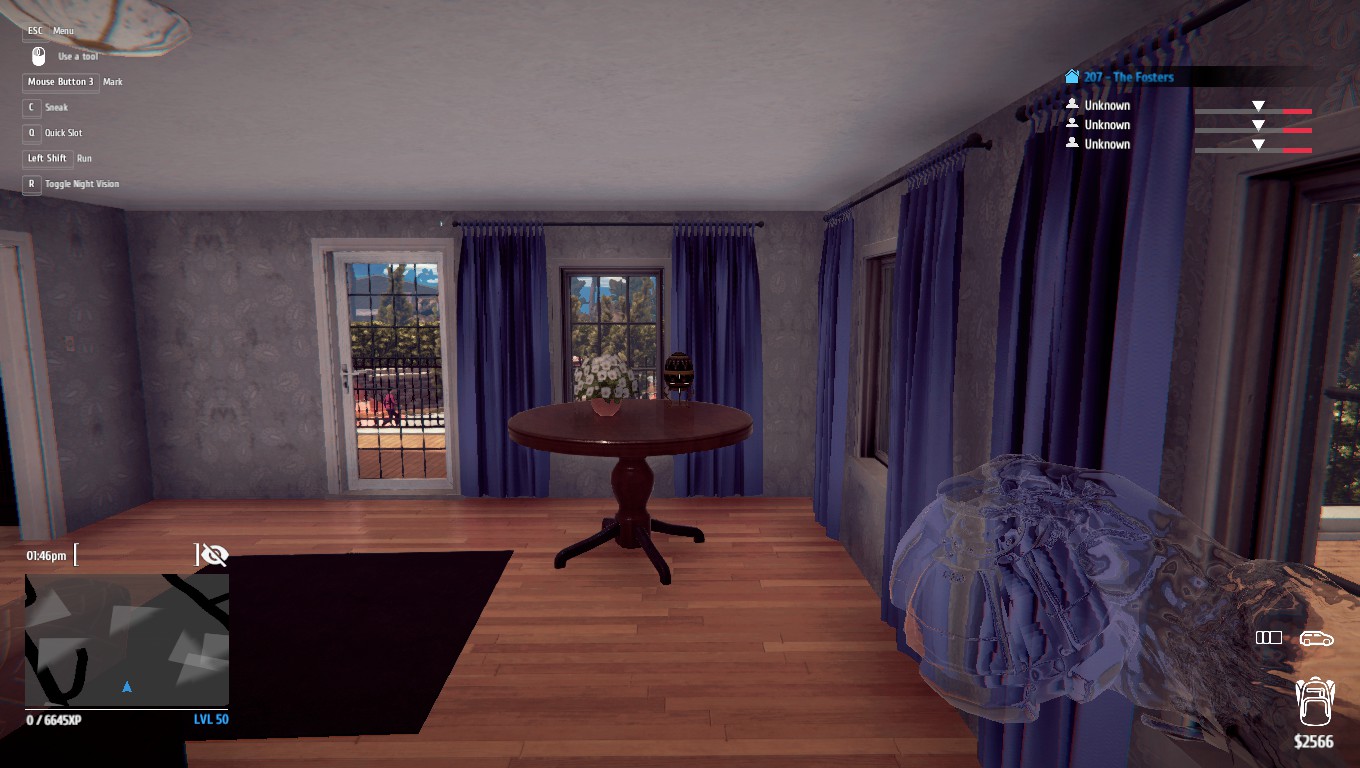 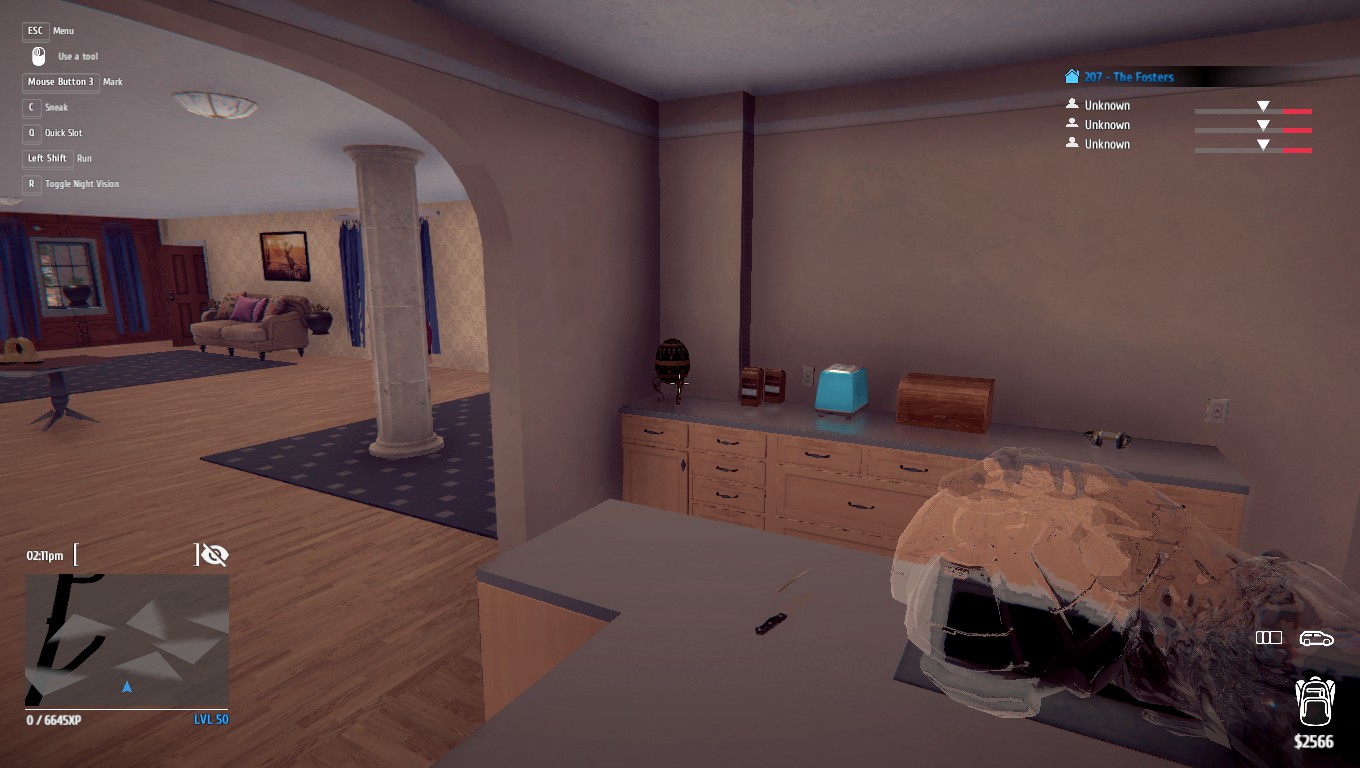 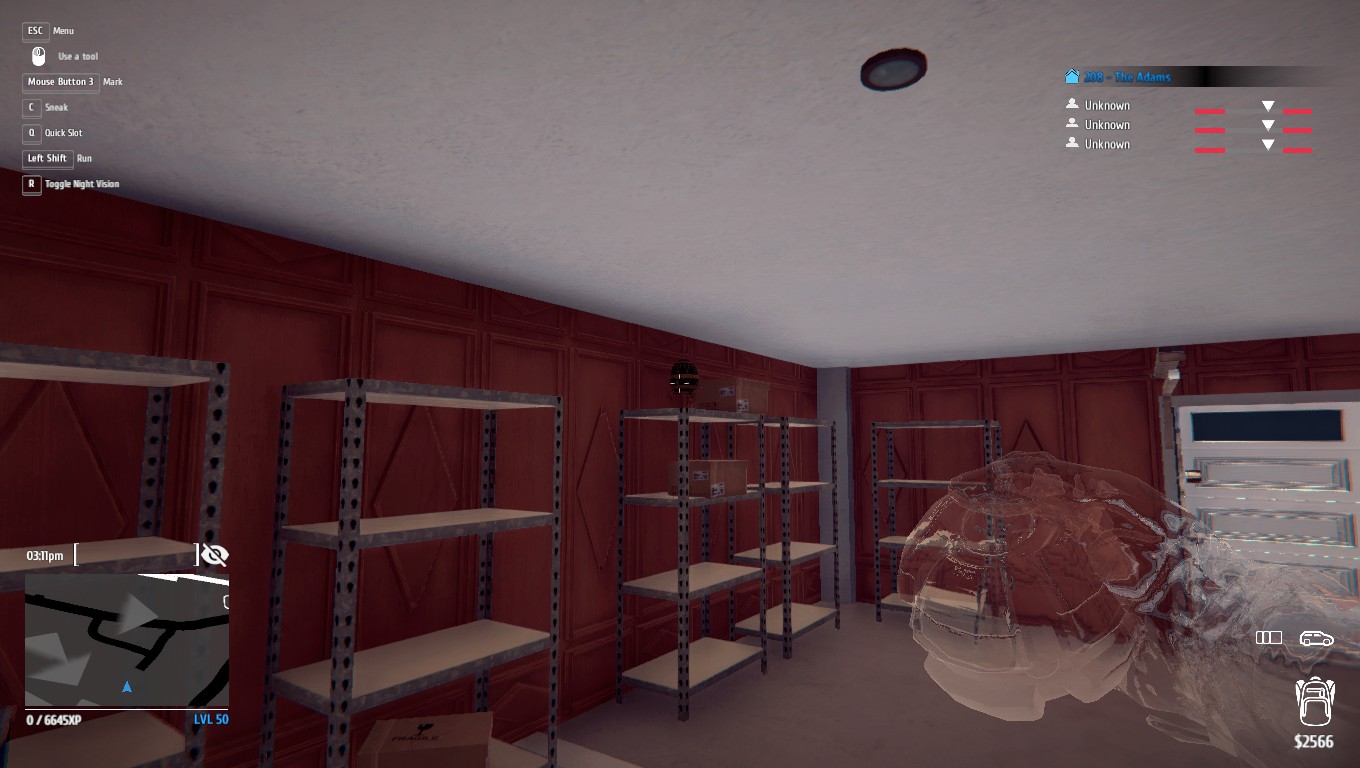 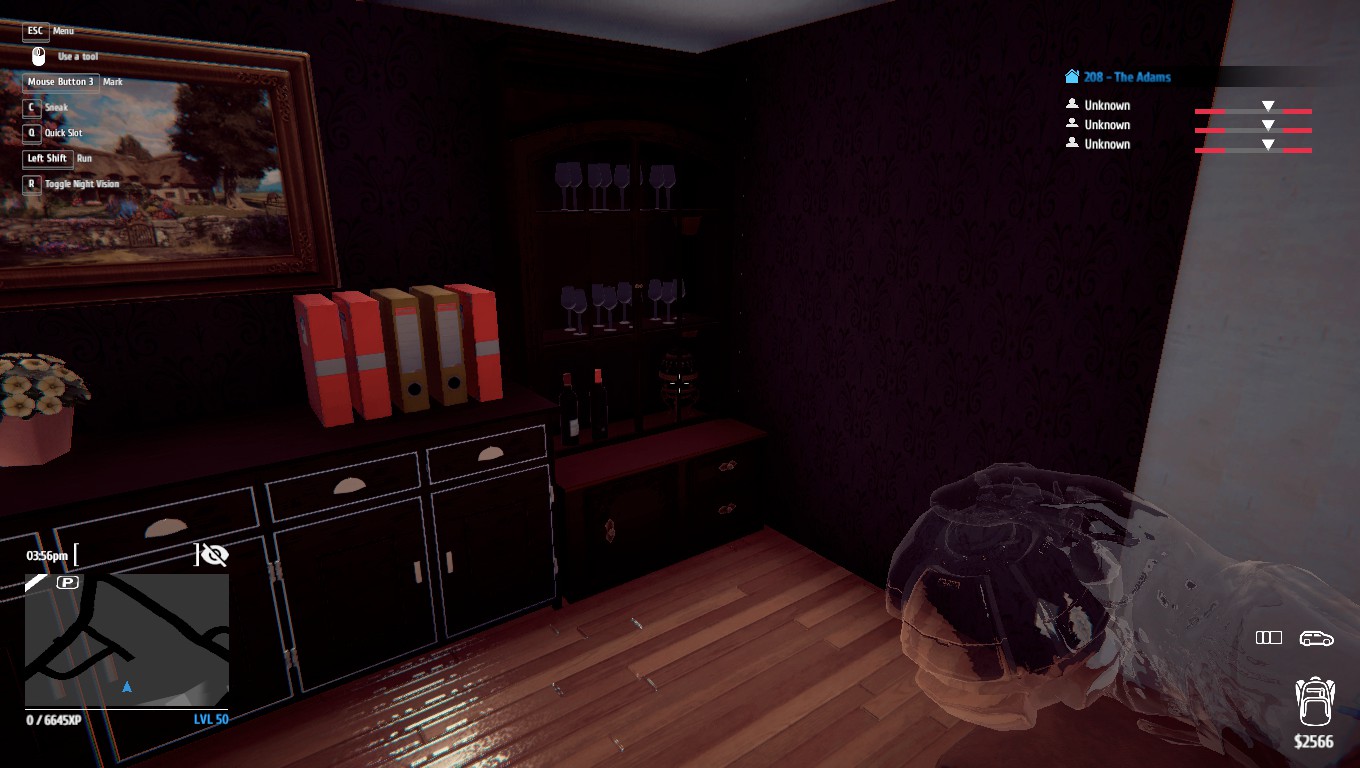 VHS is the best

VHS is the best


The achievement is unlocked after selling the VHS tapes on BlackBay, then going to another area.


1st VHS – on top of one of the buildings, on a wooden crate. 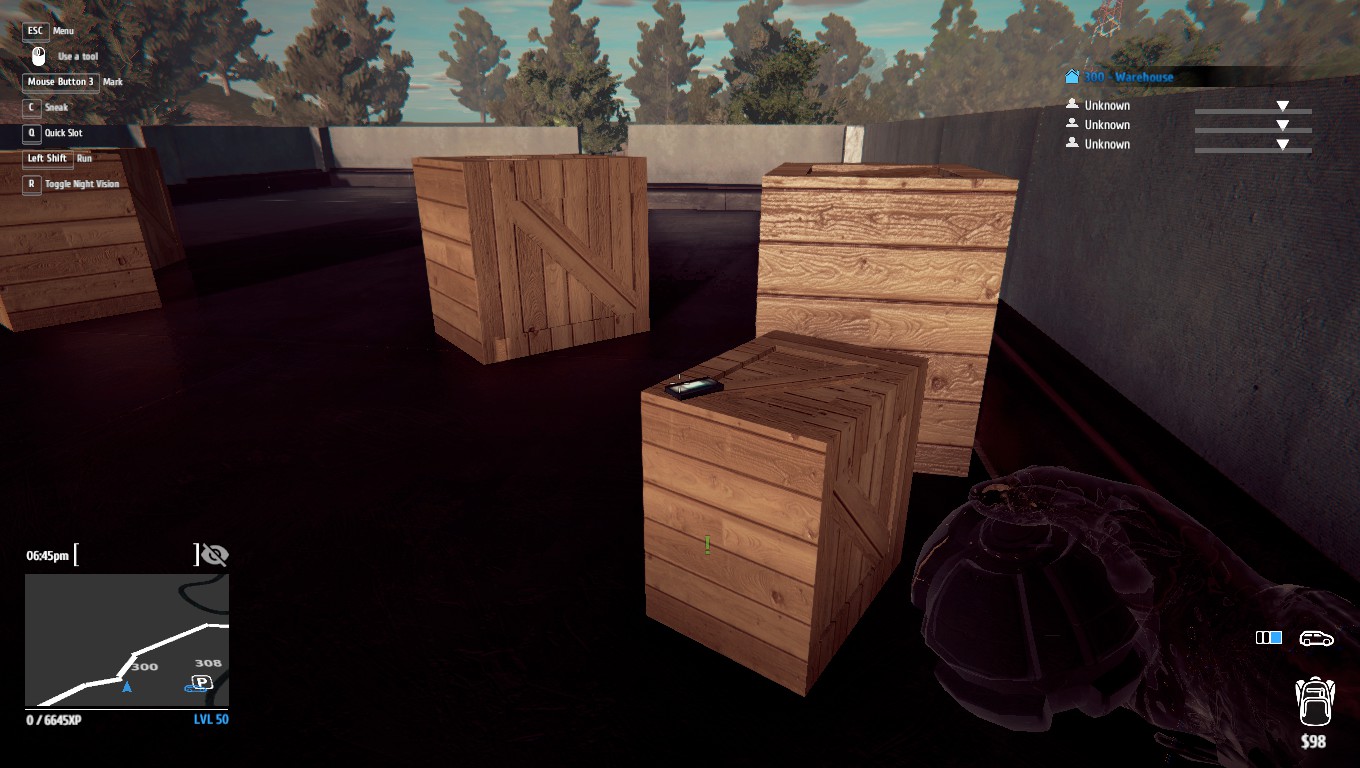 2nd VHS – on top of a wooden crate, just underneath a security camera. 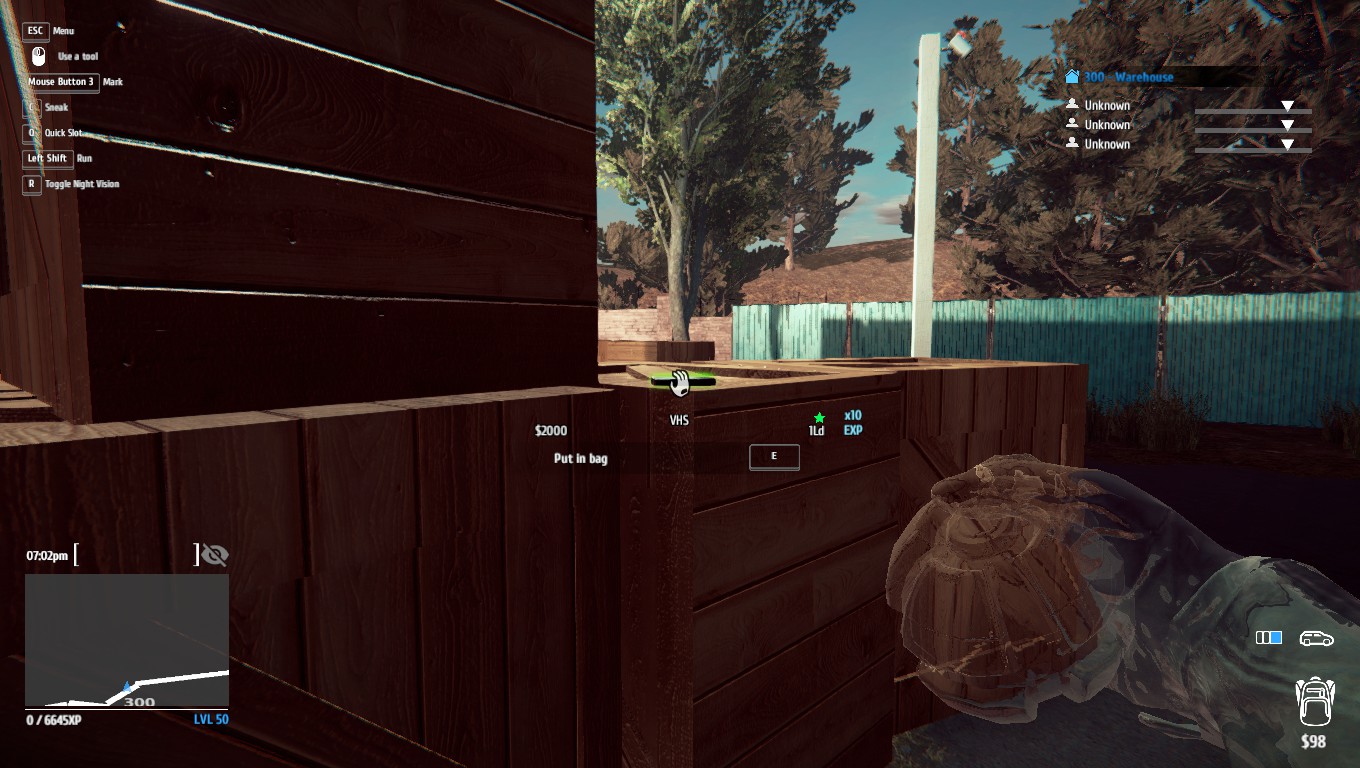 3rd VHS – after going down the second set of stairs, go to the right and into the door, then turn left and into another door. The VHS is on top of a shelf. 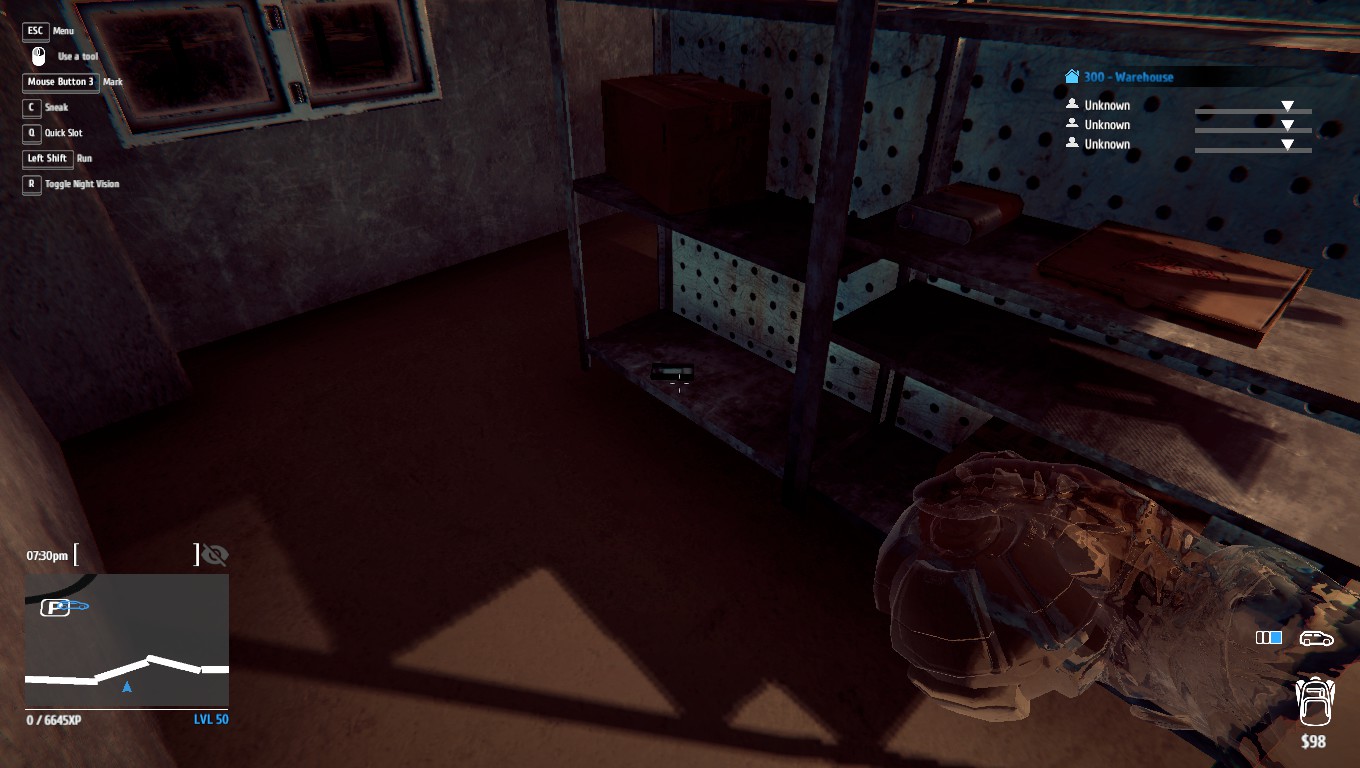 4th VHS – inside the first building, in the room which has a poster right next to the door. 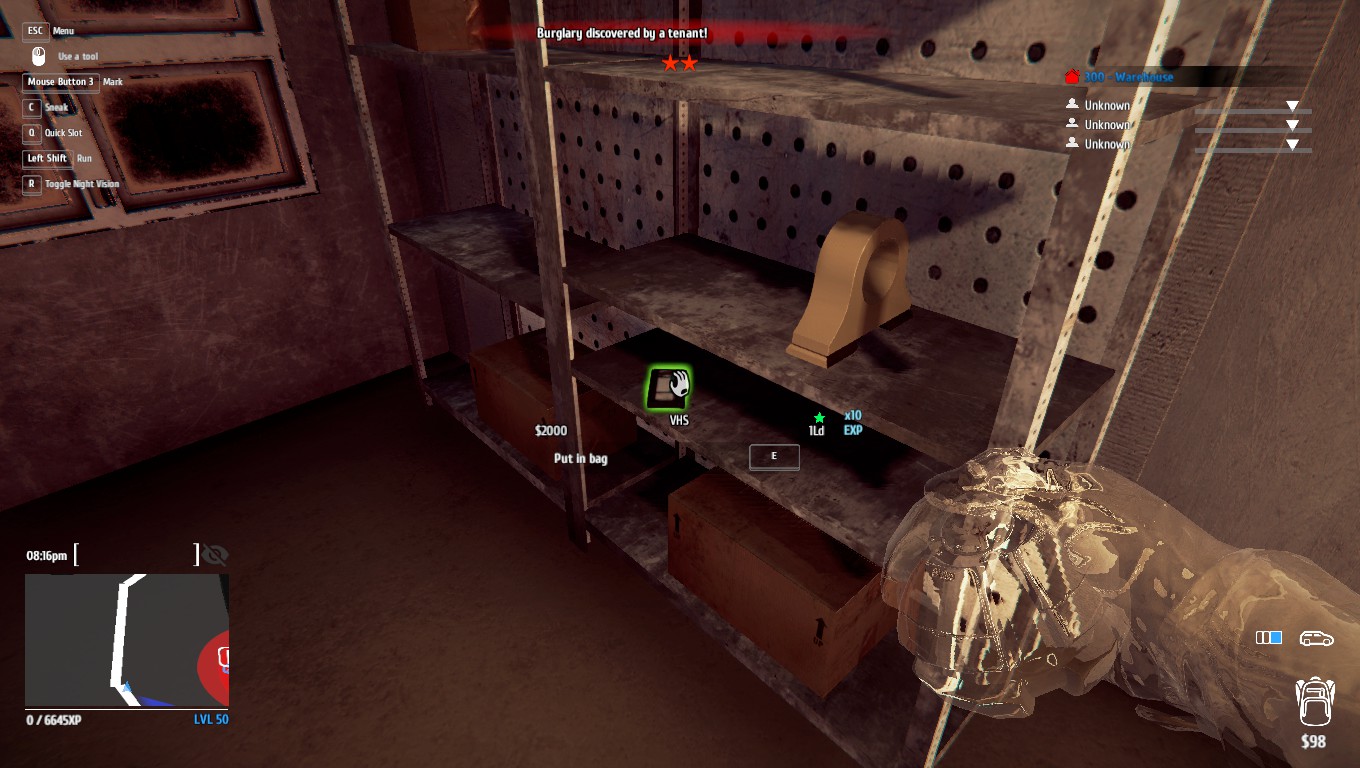 5th VHS – on the room across from the poster, on a table. 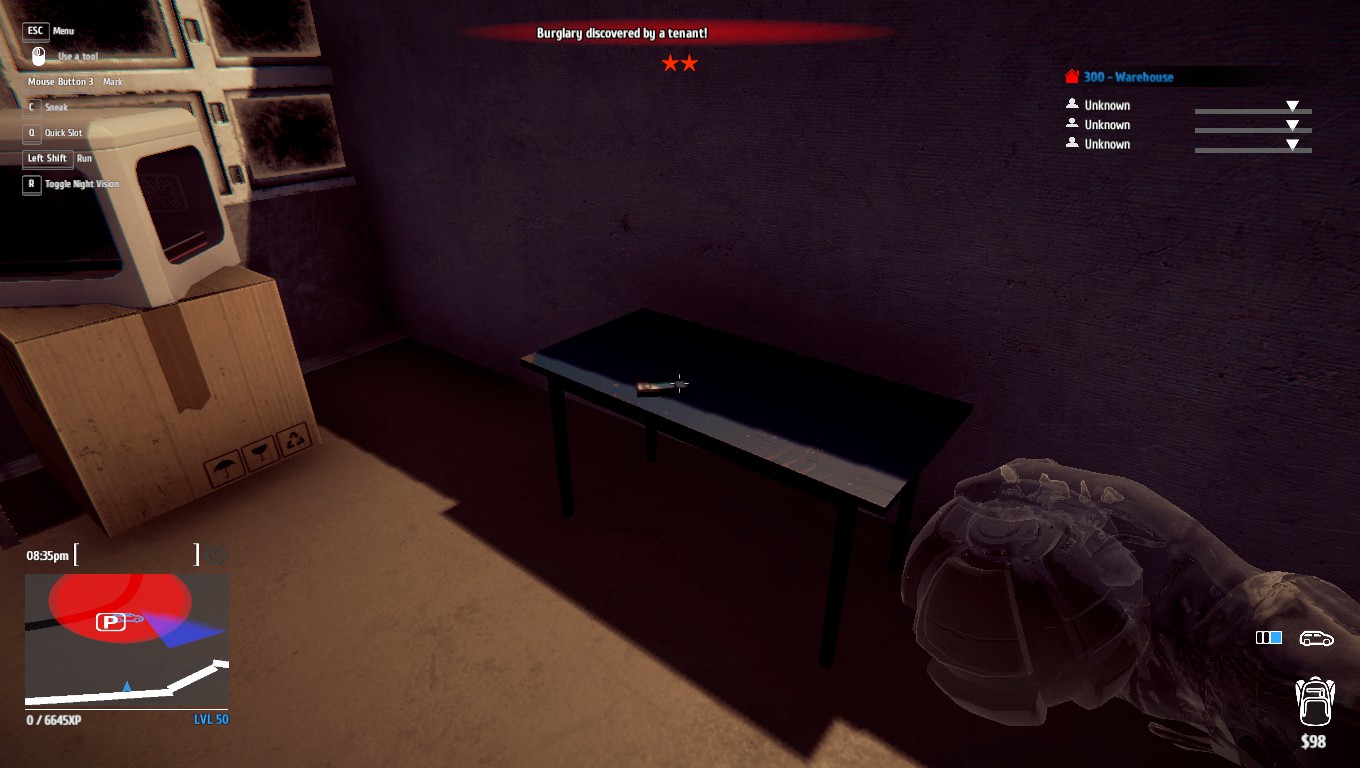 
1st box – inside the guard’s hut, at the very entrance. 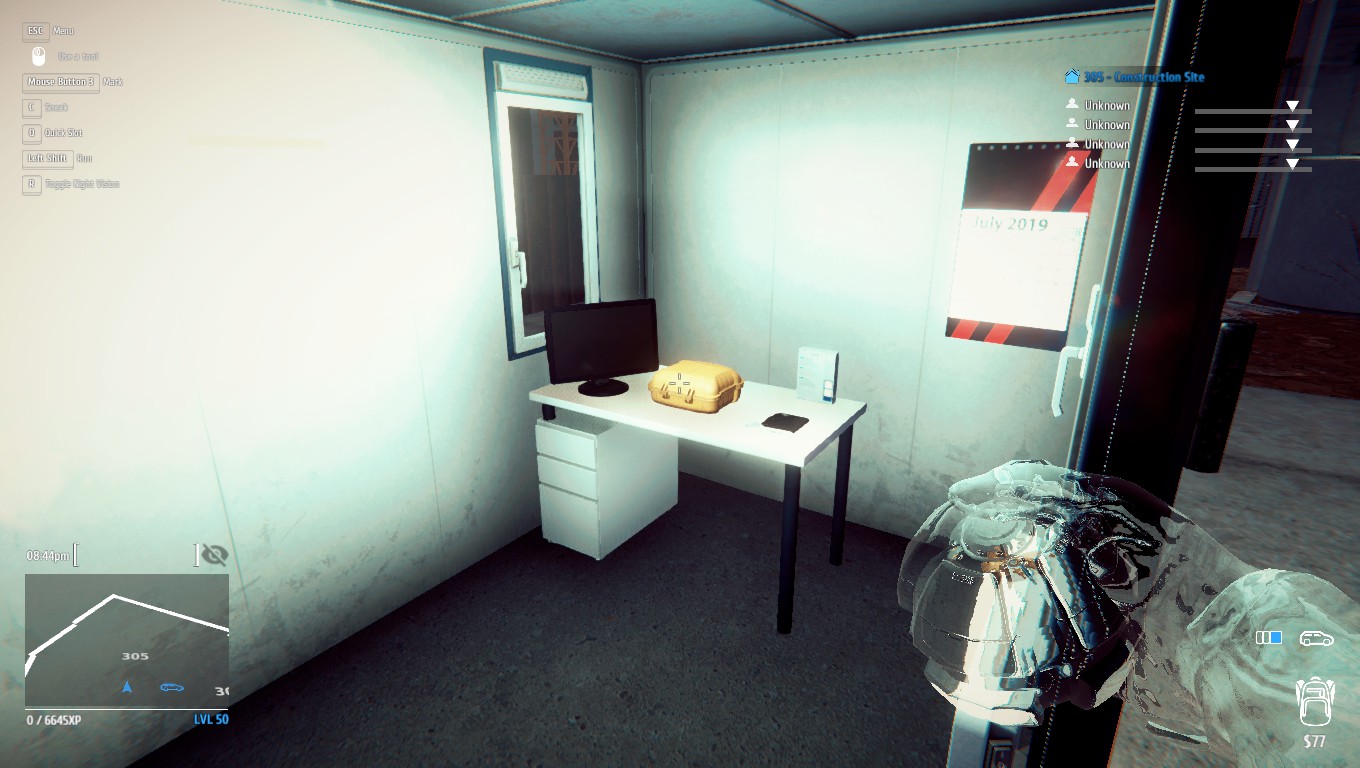 2nd box – on the ground floor of the building, next to the stairs. 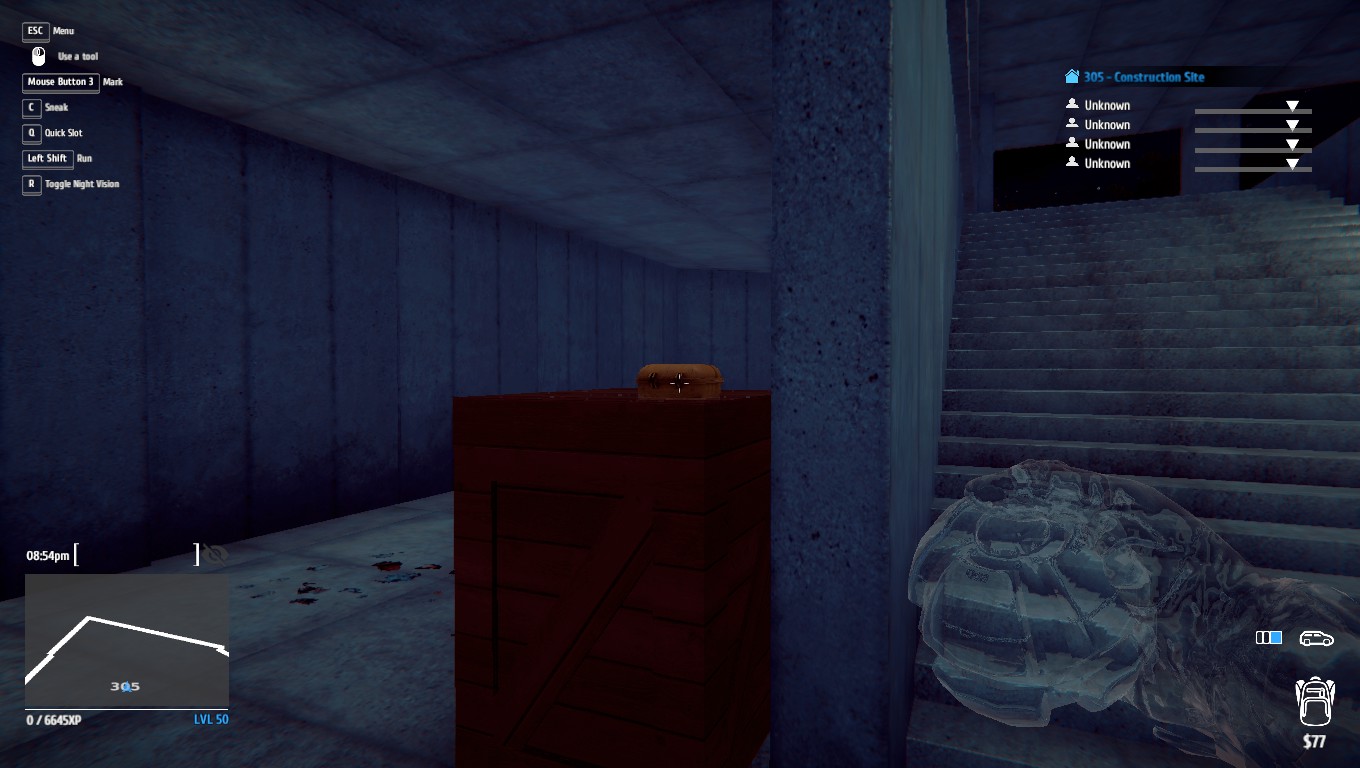 3rd box – on the second floor of the building, on top of some wooden planks. 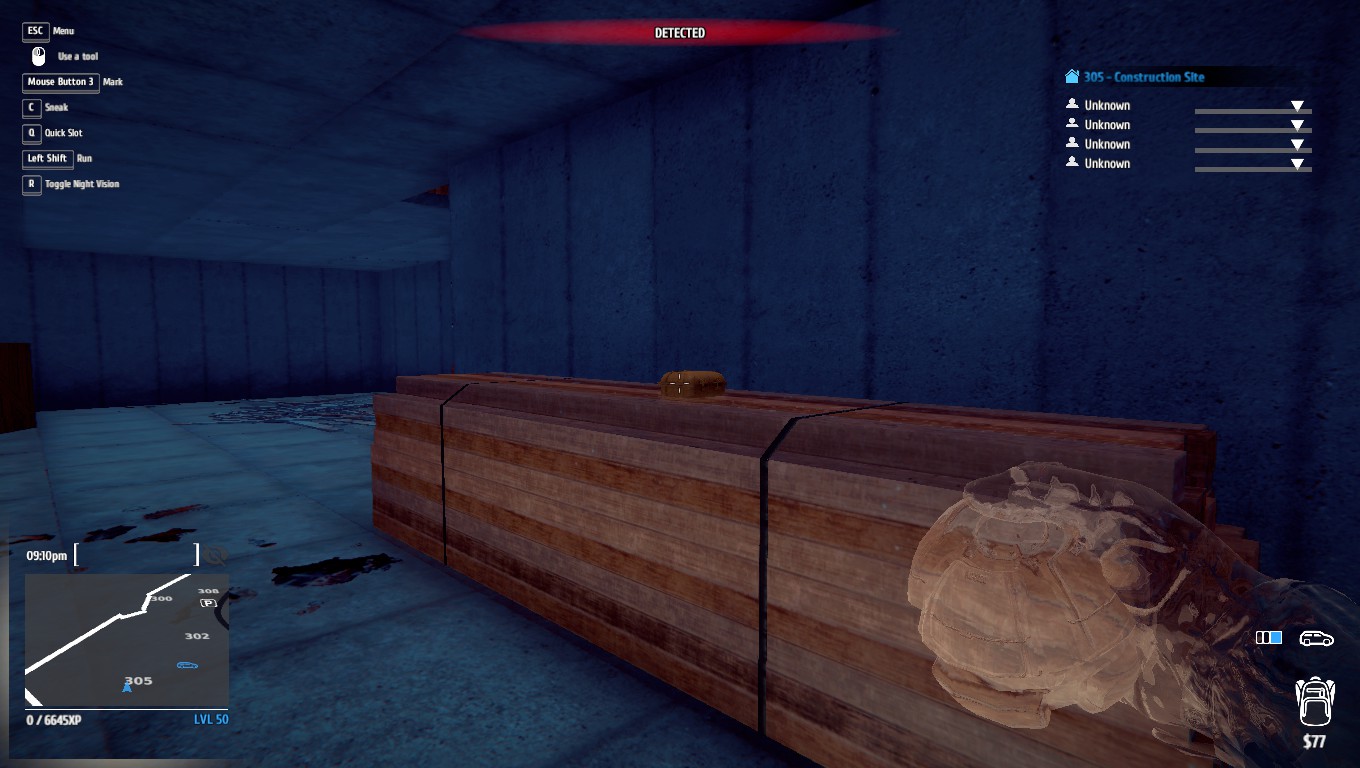 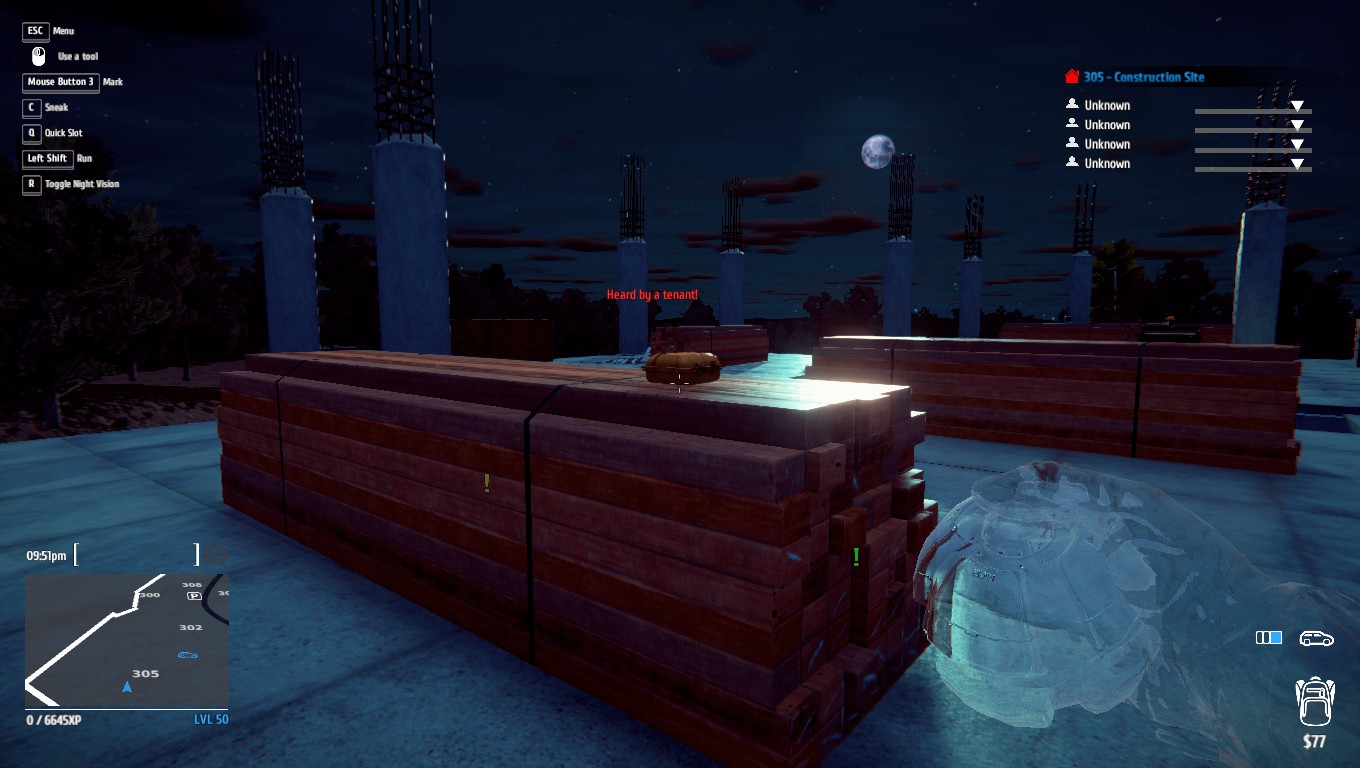 5th box – on top of the scaffolding, only accessible by jumping down from the top floor. 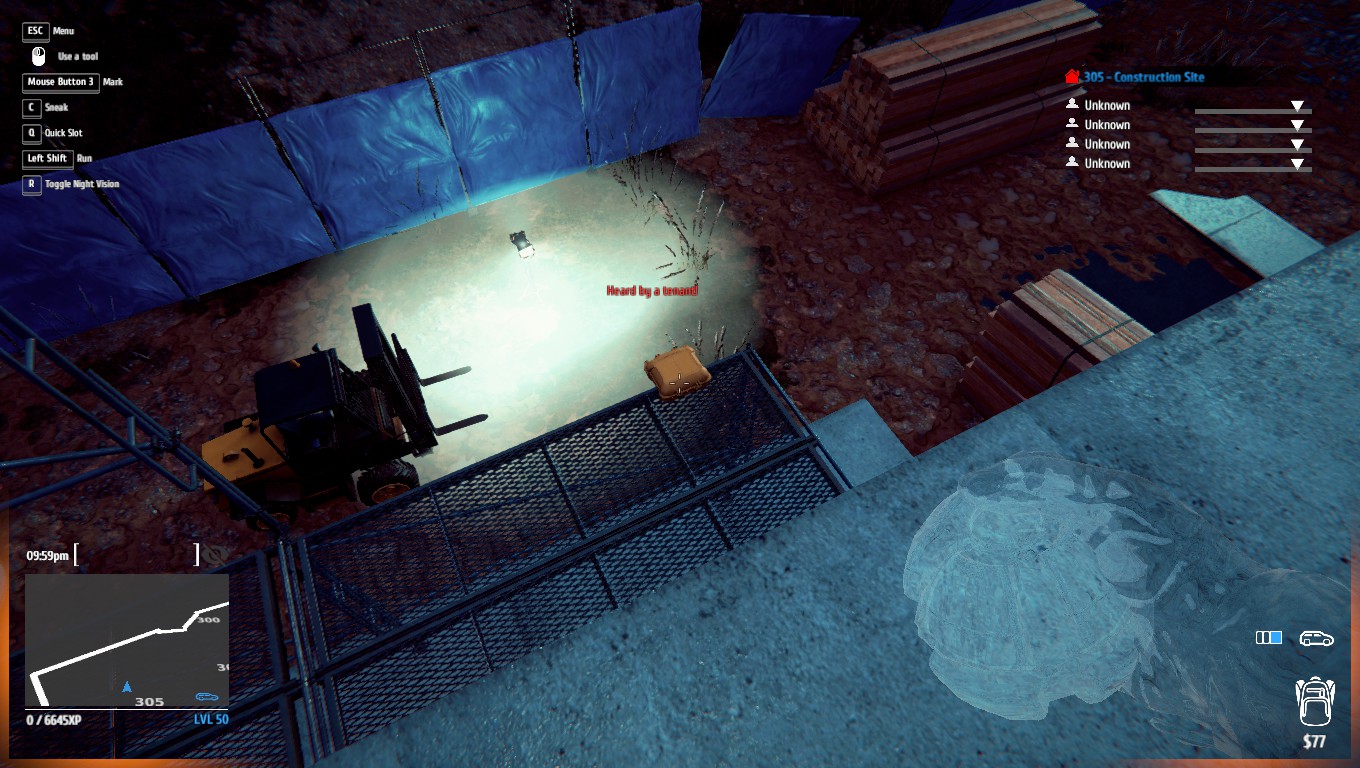 The following achievements can only be unlocked between October 1st and November 30th. Changing your computer’s date to this time frame allows you to experience this seasonal event at any time of the year.


The following images were taken from the Thief Simulator Wiki.


1st Doll – in the garage, next to some mannequins 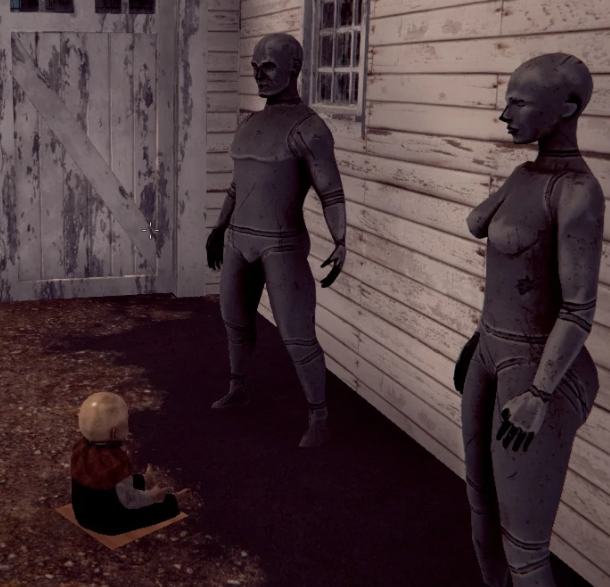 2nd Doll – on the ground floor, behind a door which is blocked by a mannequin. Turn your flashlight on and off while pointing at the mannequin in order to access the door. 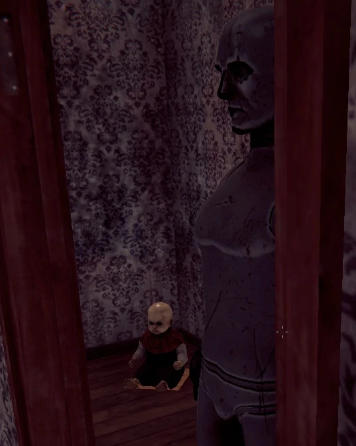 3rd Doll – in the attic, between two toy monkeys.

4th Doll – in the cellar, which can be accessed by a door behind the house. You’ll need to crouch to enter the cellar. 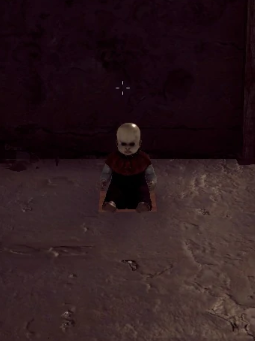 
Candy Bags are very iconic items, meaning they can be easily found once you’re at the correct location. Here’s a list of all 8 candy bags, all of which are in Greenview:

Steal and sell 7 pumpkins on BlackBay


Find all 7 Jack-o’-lanterns and sell them on BlackBay. Note that you’ll need to bring them to your car’s trunk in order to steal them. Five can be found in Greenview and the remaining two on Industrial. Here’s a list of them:

The following achievements can only be unlocked between December 1st and January 31st. Changing your computer’s date to this time frame allows you to experience this seasonal event at any time of the year.


This vehicle can be found in Industrial St. 307 and requires both the Hacking Laptop PRO and the Car Lock Pick Gun to steal.


All 6 big toy boxes can be found on Industrial St. 307. Note that you’ll need to carry them back to your car’s trunk in order to steal them.


1st toy box – on top of a shelf inside the first warehouse. 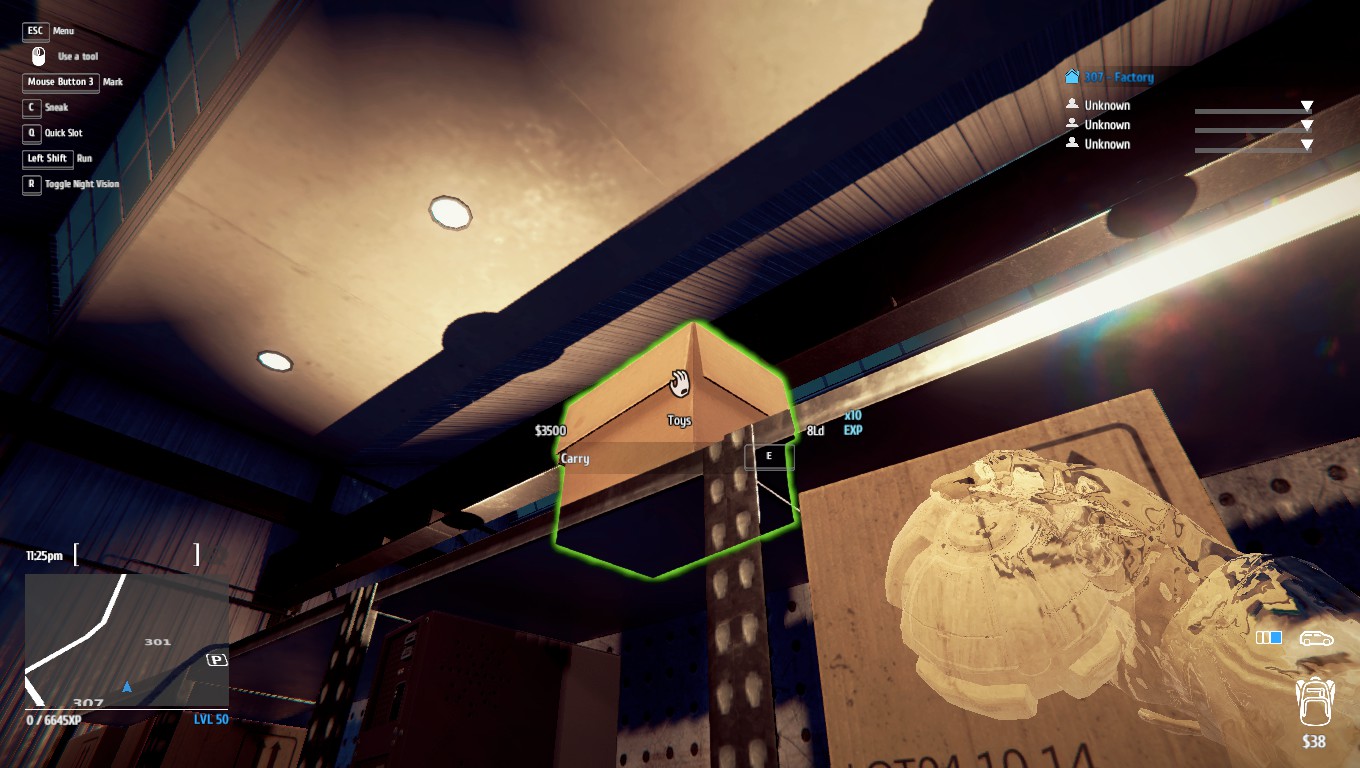 2nd toy box– on top of a wooden crate in the first warehouse. 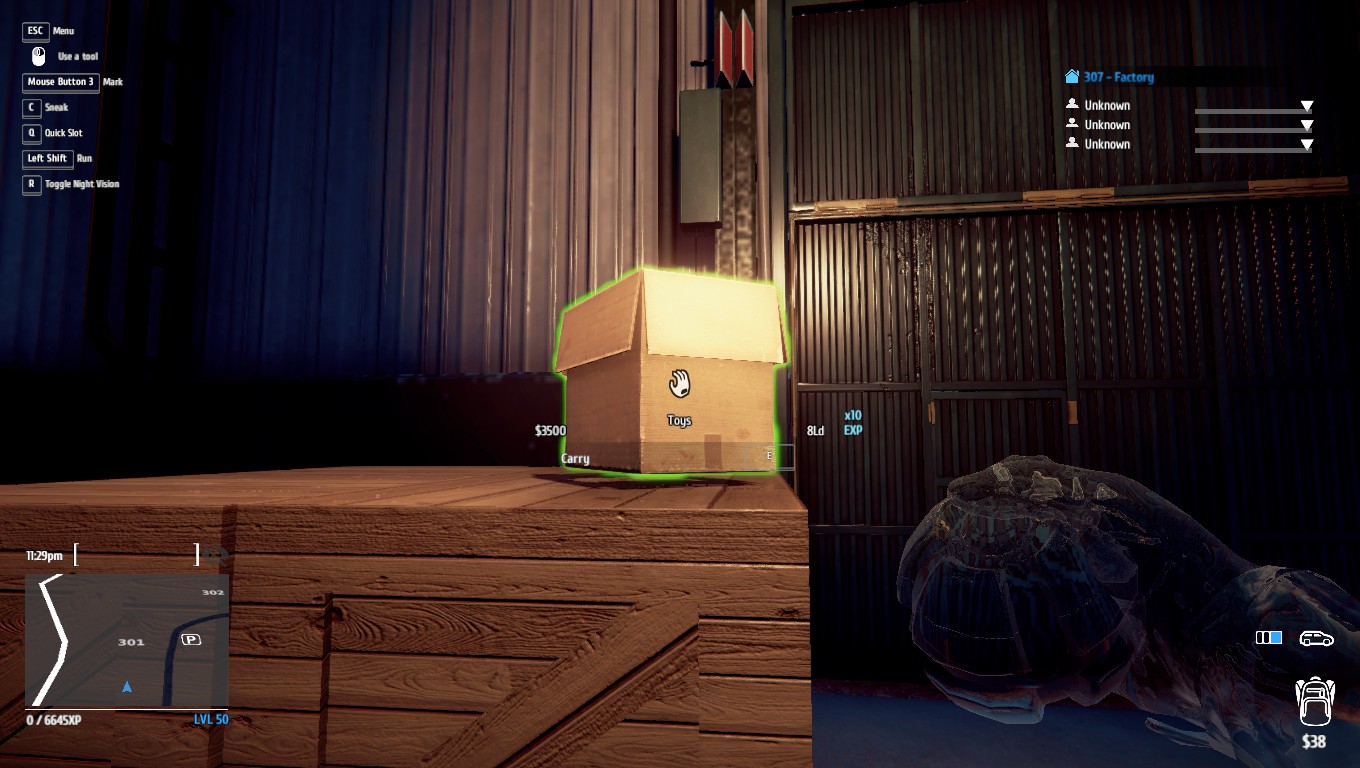 3rd toy box – inside a red container, more or less between both warehouses. 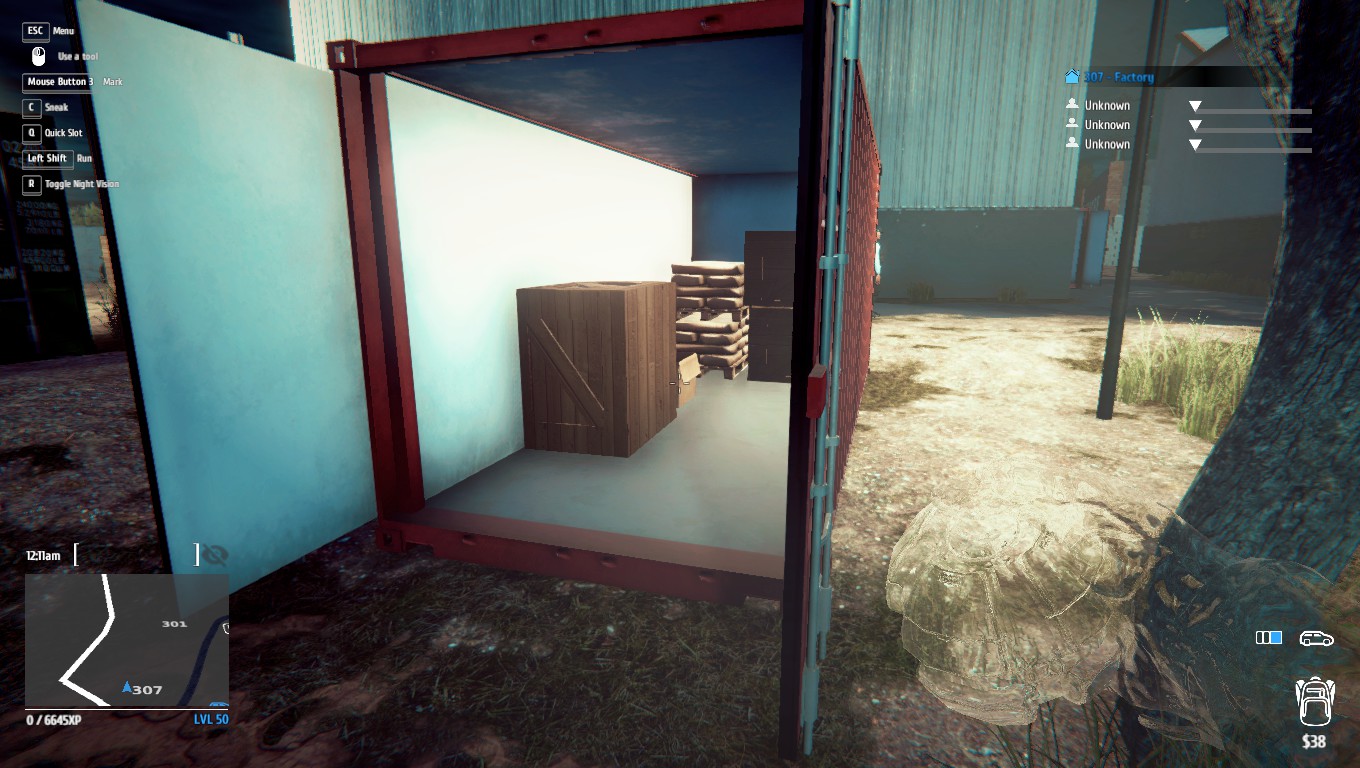 4th toy box – on top of a table inside the second warehouse. 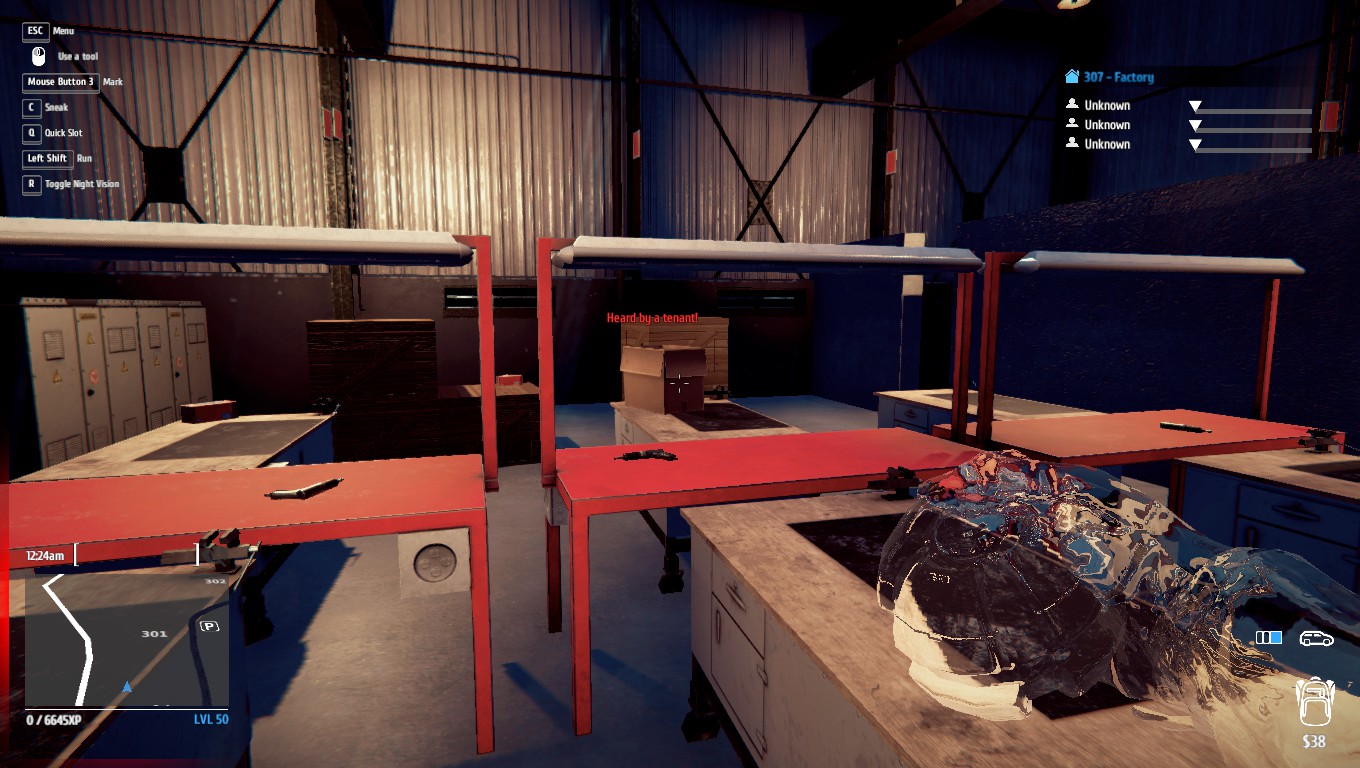 5th toy box – on top of another table in the corner, inside the second warehouse. 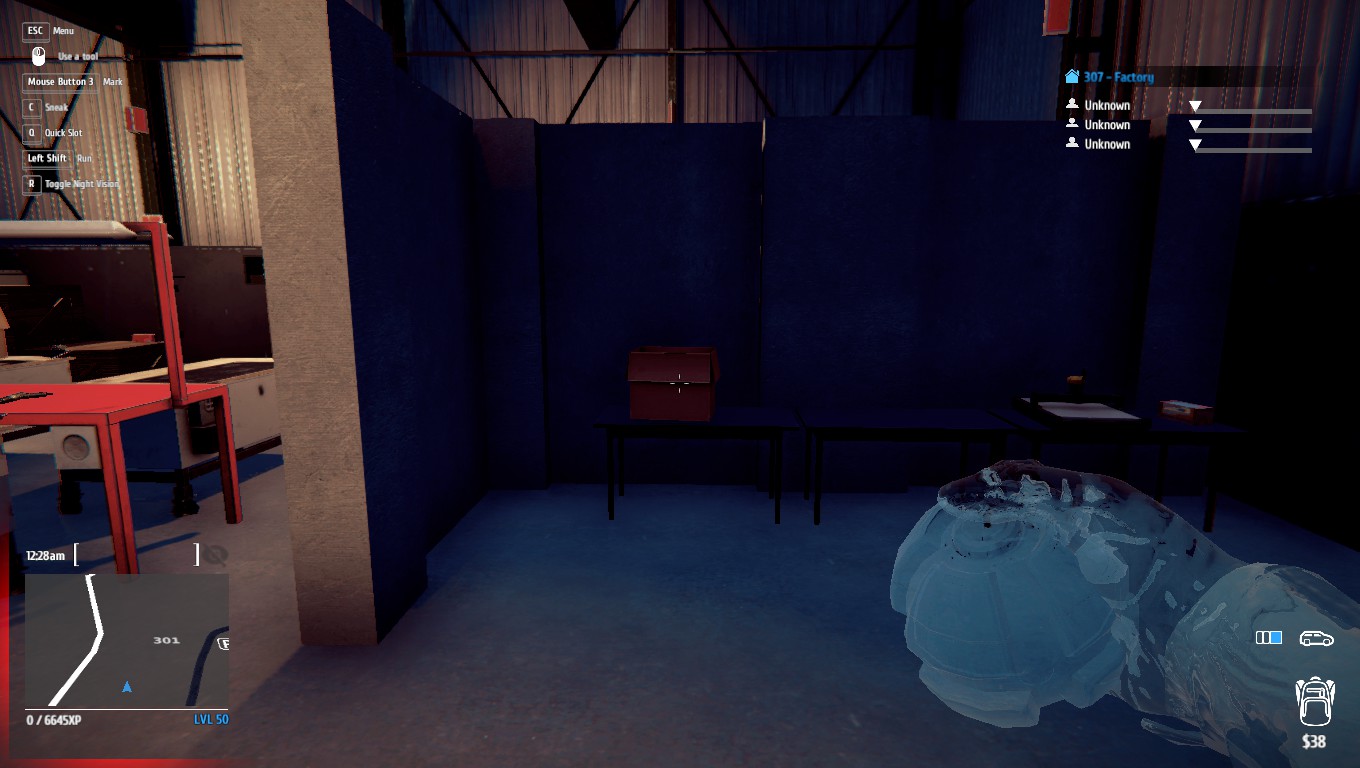 6th toy box – on the ground, hidden behind a red table, inside the second warehouse. 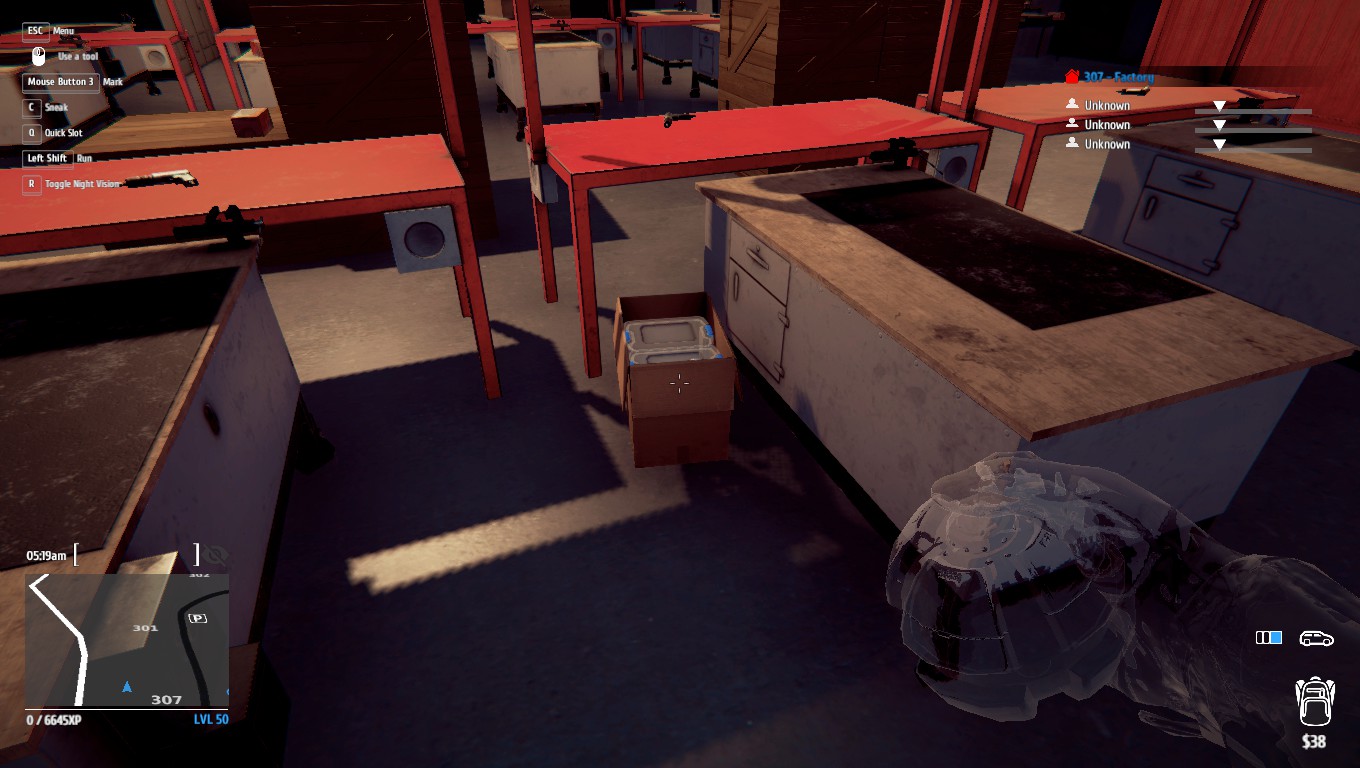 Sell all presents on BlackBay


There are a total of 39 presents to steal (thanks to @Vancleef on Astats).


Note 1: all presents can be found underneath the christmas trees in the respective houses.


Note 2: orange and white presents need to be carried back to your car’s trunk in order to be stolen.

Thanks for checking out my guide, I hope it helped you!

Written by Brigglyo, The Brig

Here we come to an end for Thief Simulator Achievements Guide – Overview hope you enjoy it. If you think we forget something to include or we should make an update to the post let us know via comment, and we will fix it asap! Thanks and have a great day!