The location of the eight (8) Golden Chests with both coordinates and pictures showing where they are.

What are Golden Chests?

Golden Chests are secret hidden gold coloured chests that each contain a novelty gold statuette, and some end game resources, typically Aluminium and Super Alloy in the chests near the starter area. Meanwhile the chests further afield contain the much coveted “Rods of Power” which in the case of the green ones is a lot more literal than you might yet realise.

This chest is located on the Western Ridge within the Lake-bed starting area, it can’t be spotted from down below from a distance, as the ridge is curved up, and chests sits in a shallow pocket. 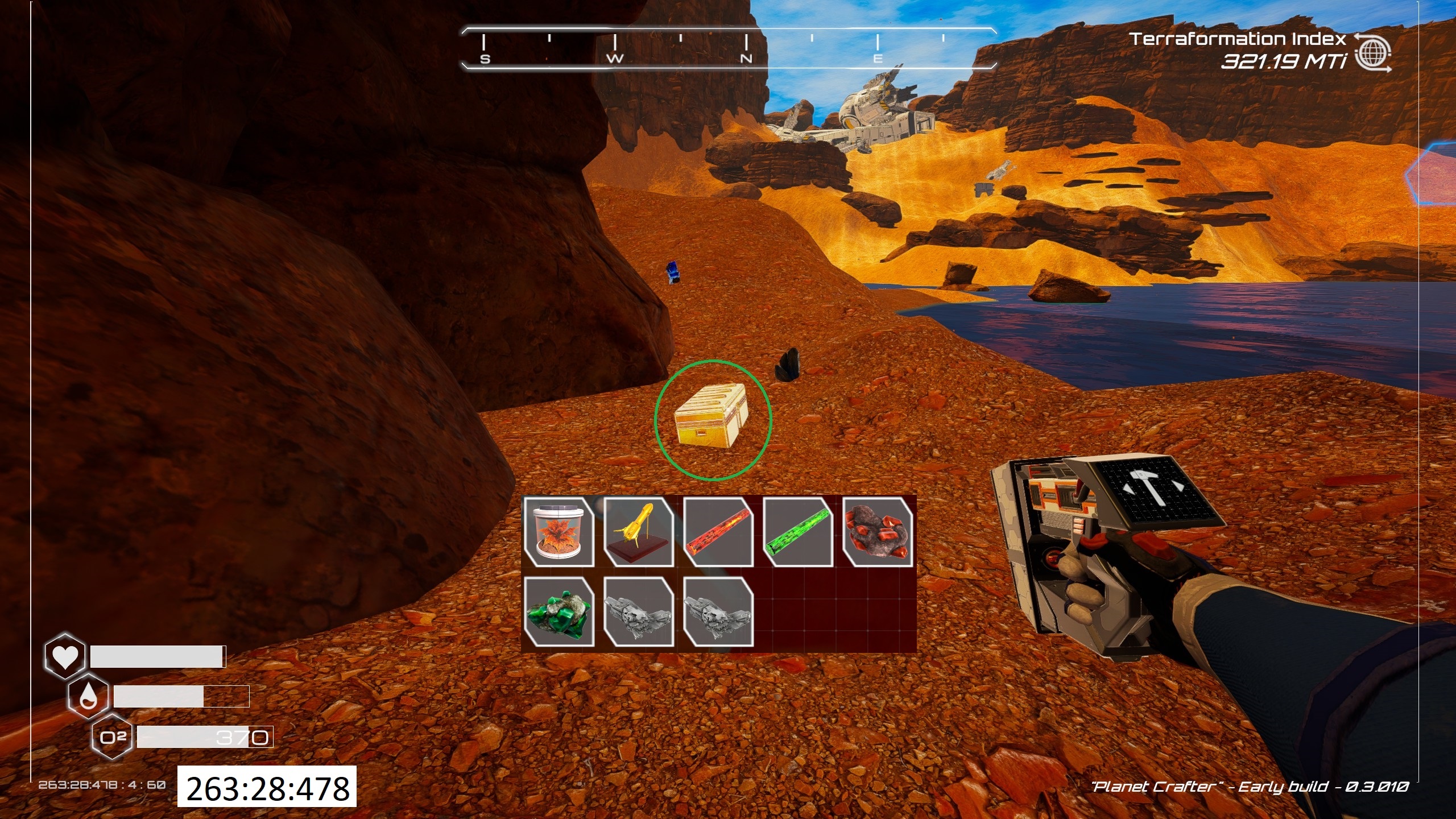 This chest is located north-west of the Lake-bed starter area, atop the wrecked oracle cla*s freighter which can be accessed via the sand dune to the right of the open cargo bay doors. 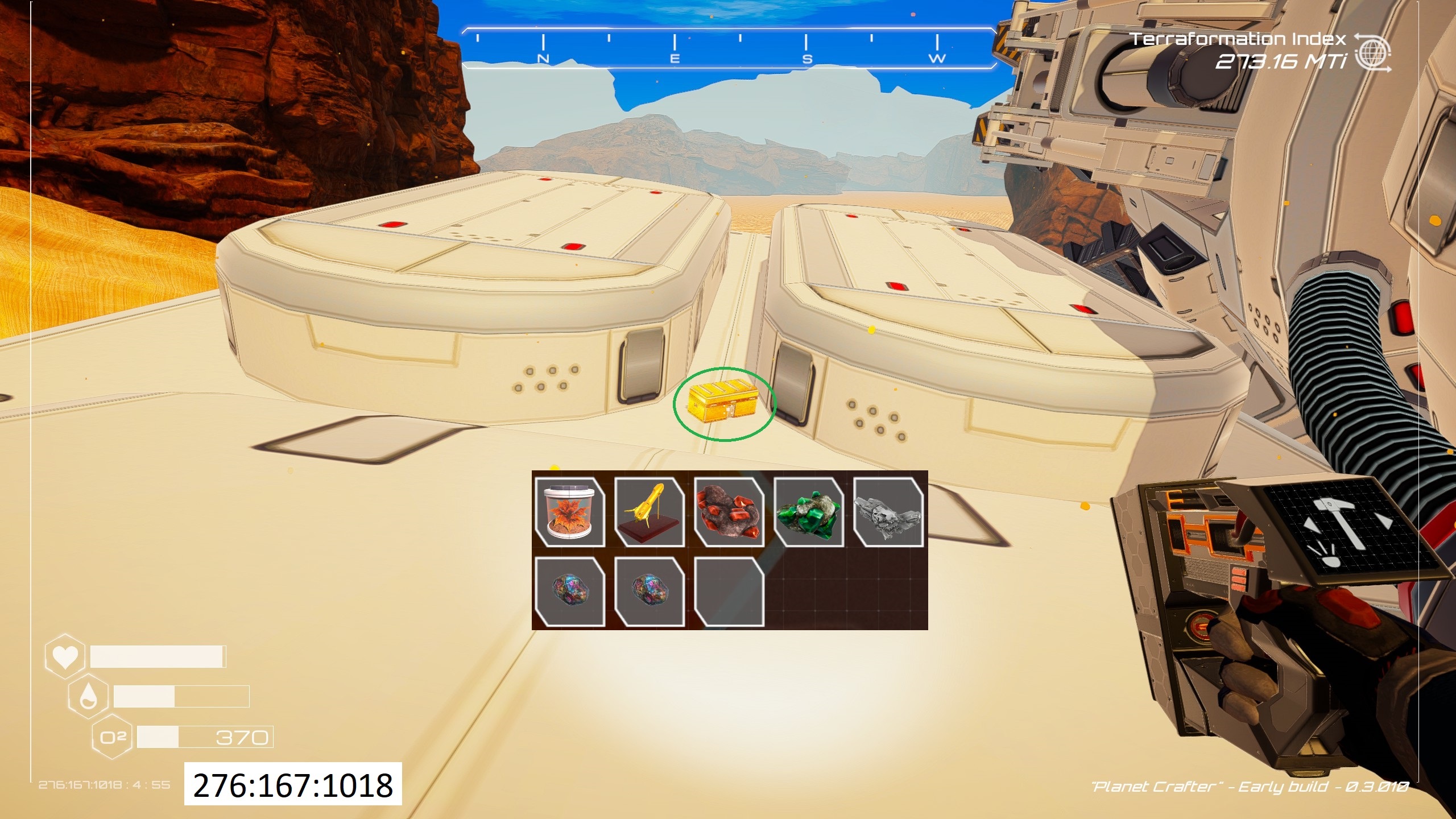 Located deep within the Iridium Caves, on the second level, behind some rocks, which is best accessed via jumping down from the third level. 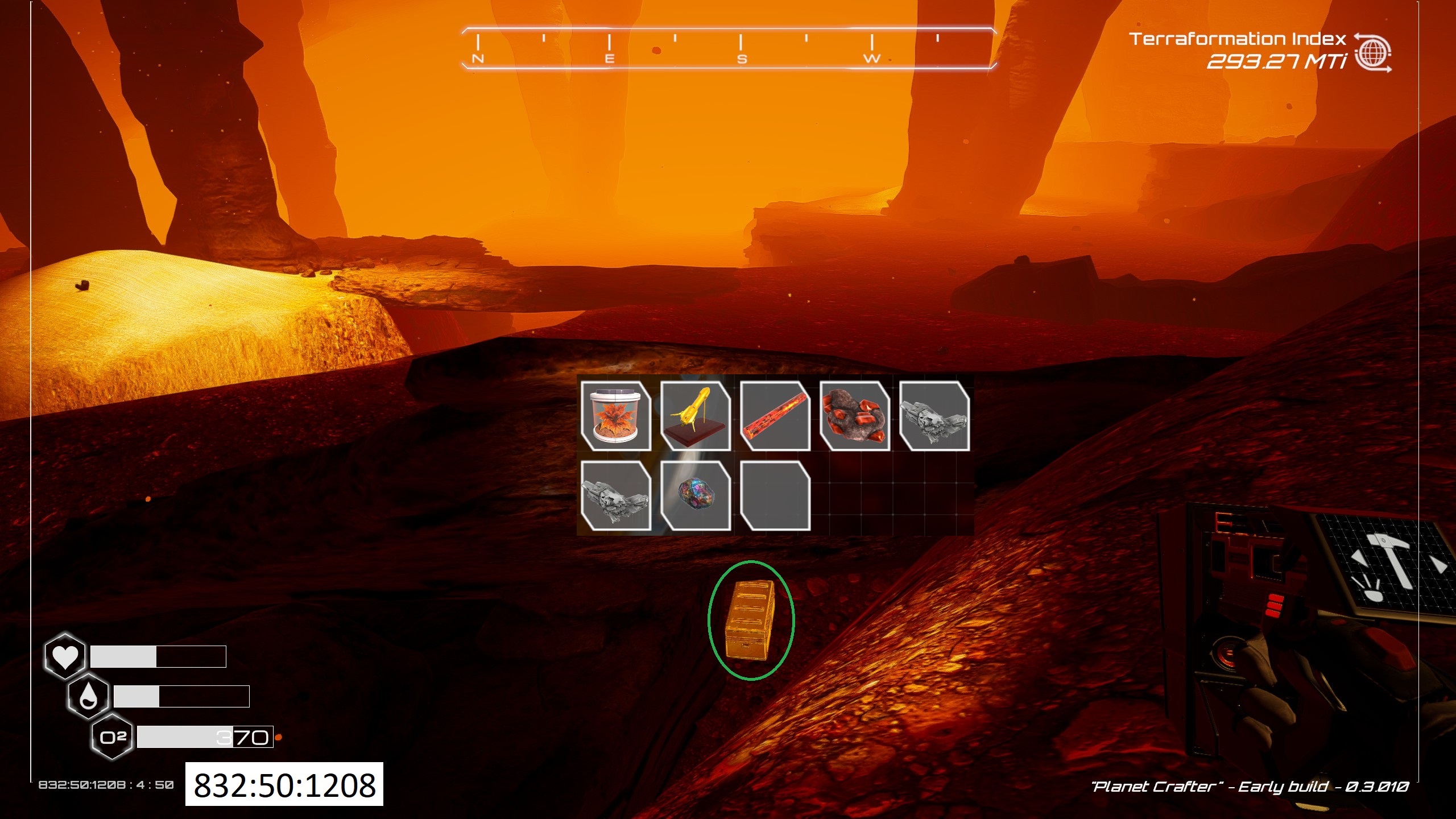 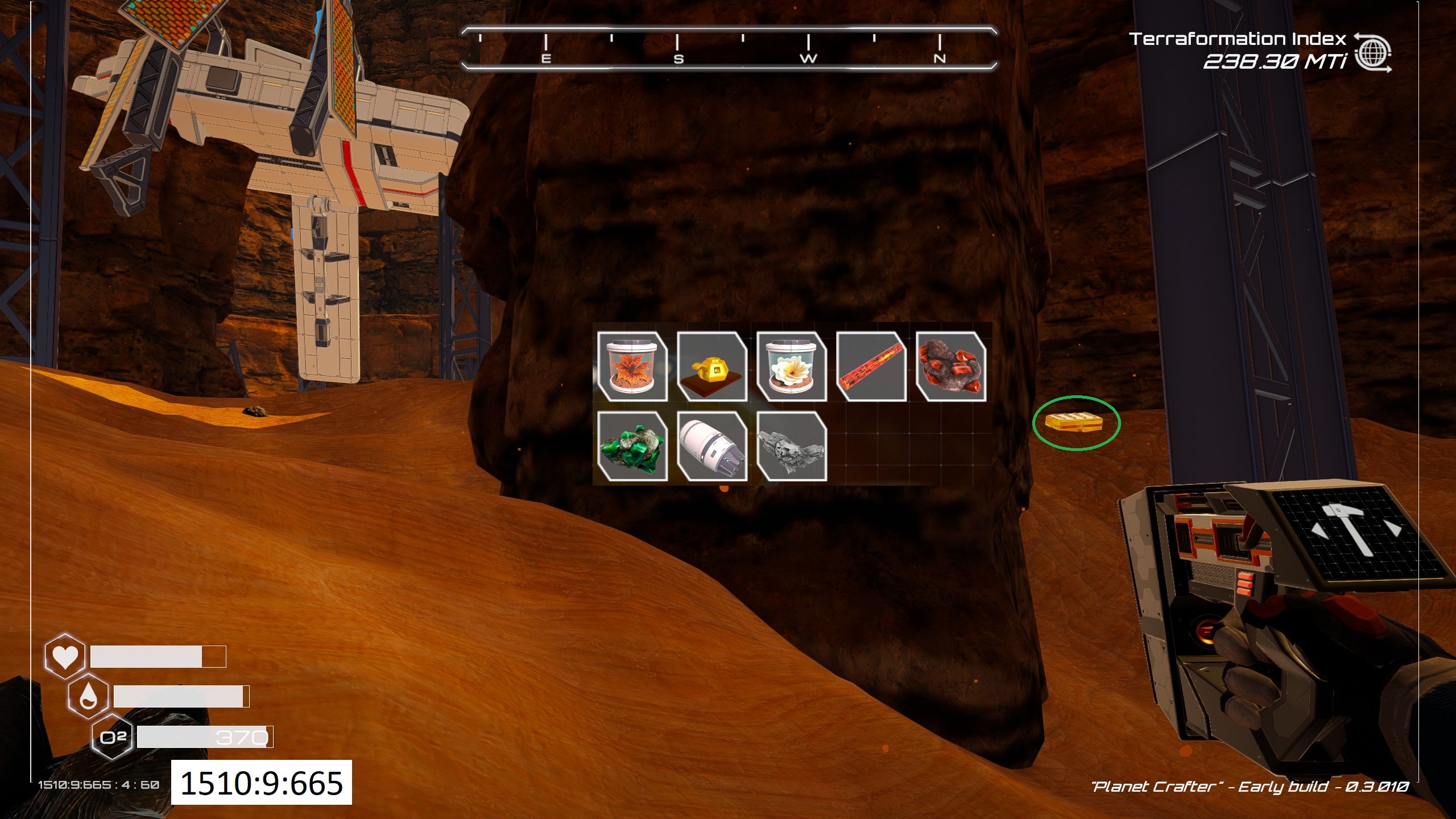 This one can be a little hard to find early on, of course once the lakes have formed it sticks out like a soar thumb. 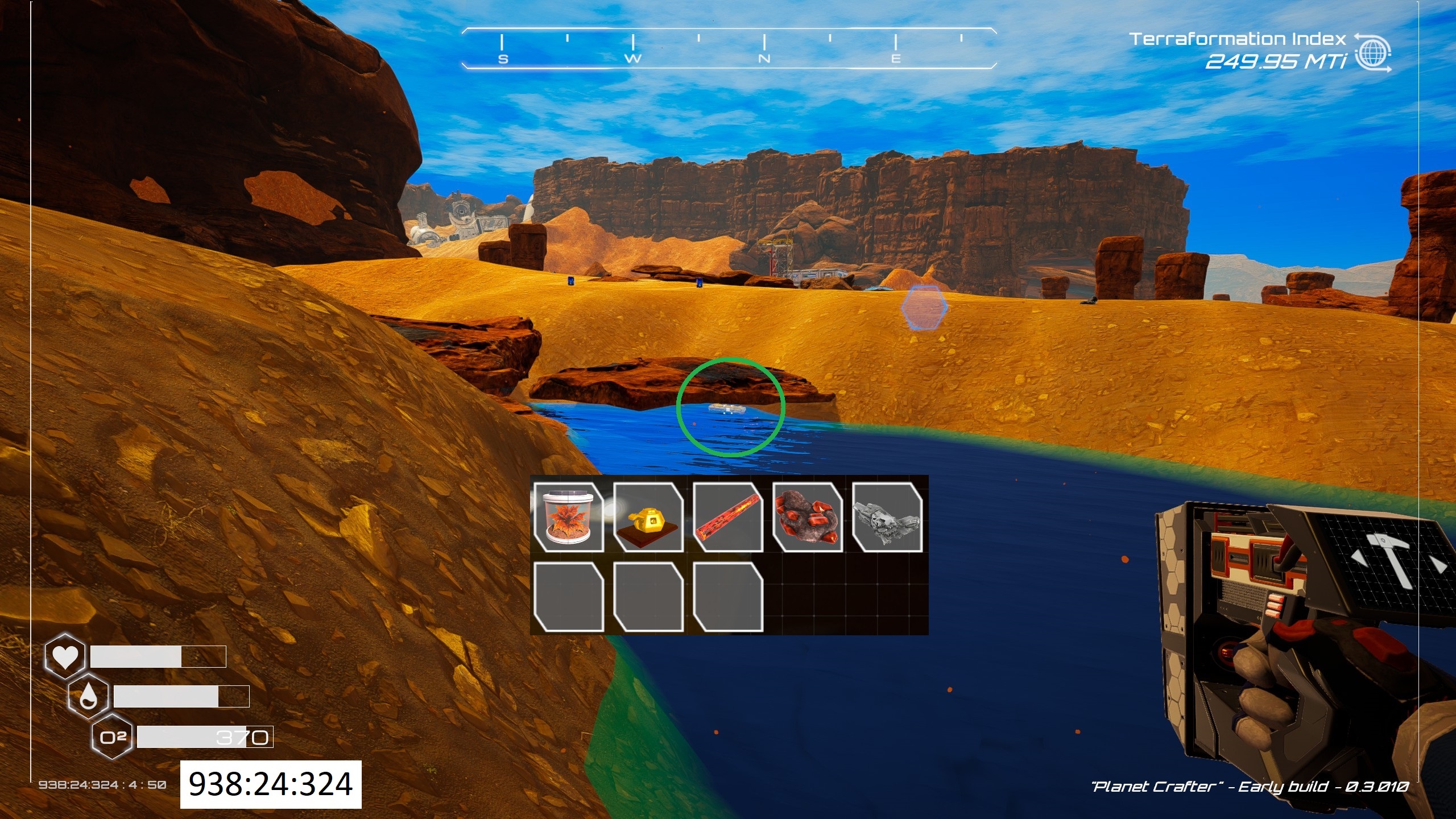 Located in an oval nook on the south-eastern side of the Aluminium Hills. Just walk around the southern edge, and you’ll find it sure enough. 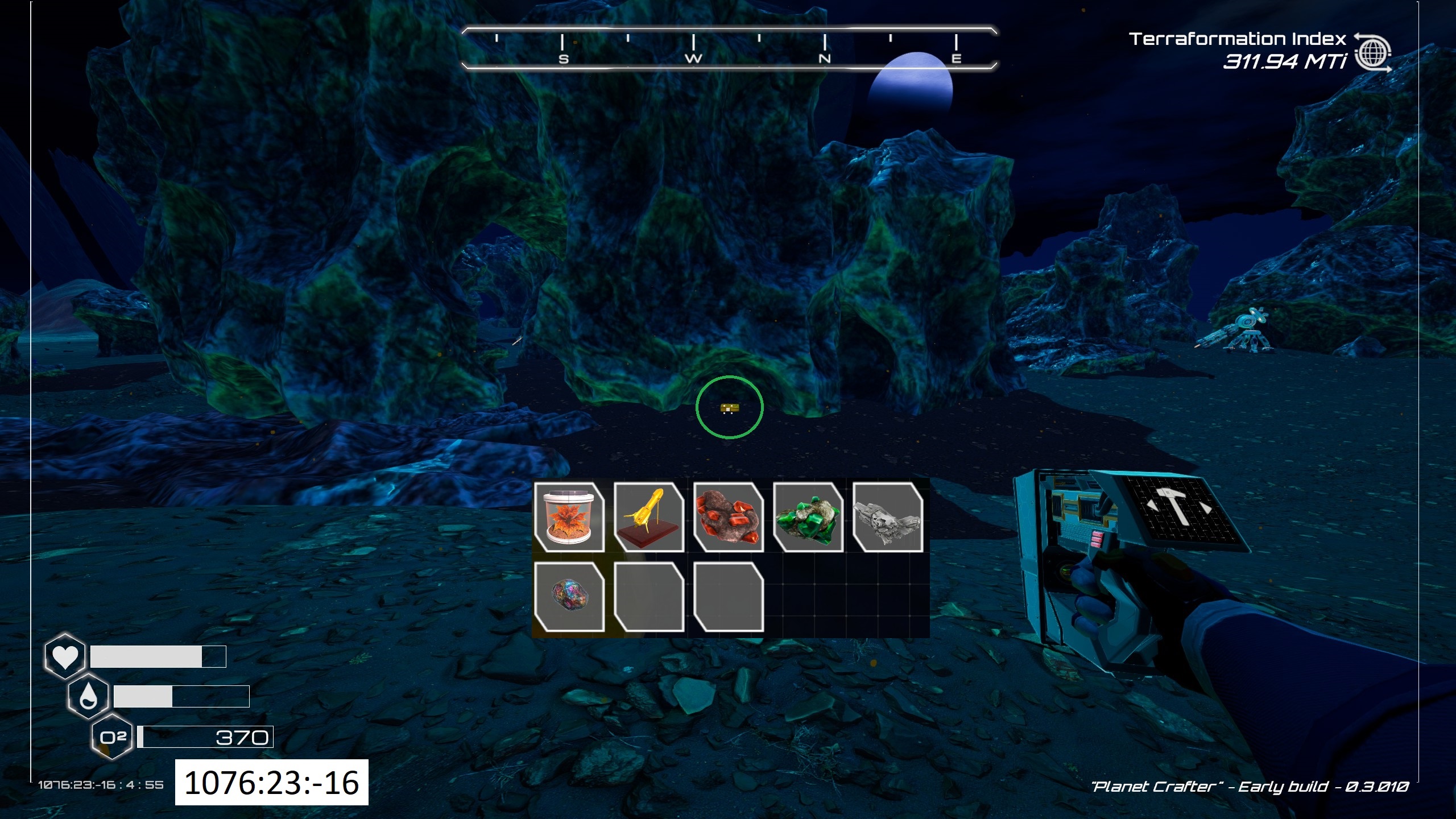 The Field of Spiked Columns is a bit of a dismal location with reduced visibility. It can be accessed by going west of the Lake-bed starter area, or north-westward from the Aluminium Hills.


It’s hidden in the back corner just right and back a bit from of the rightmost shipping container, or alternatively you can go left of the mine entrance and follow cliff face until you hit the corner then turn round, and it’s there. 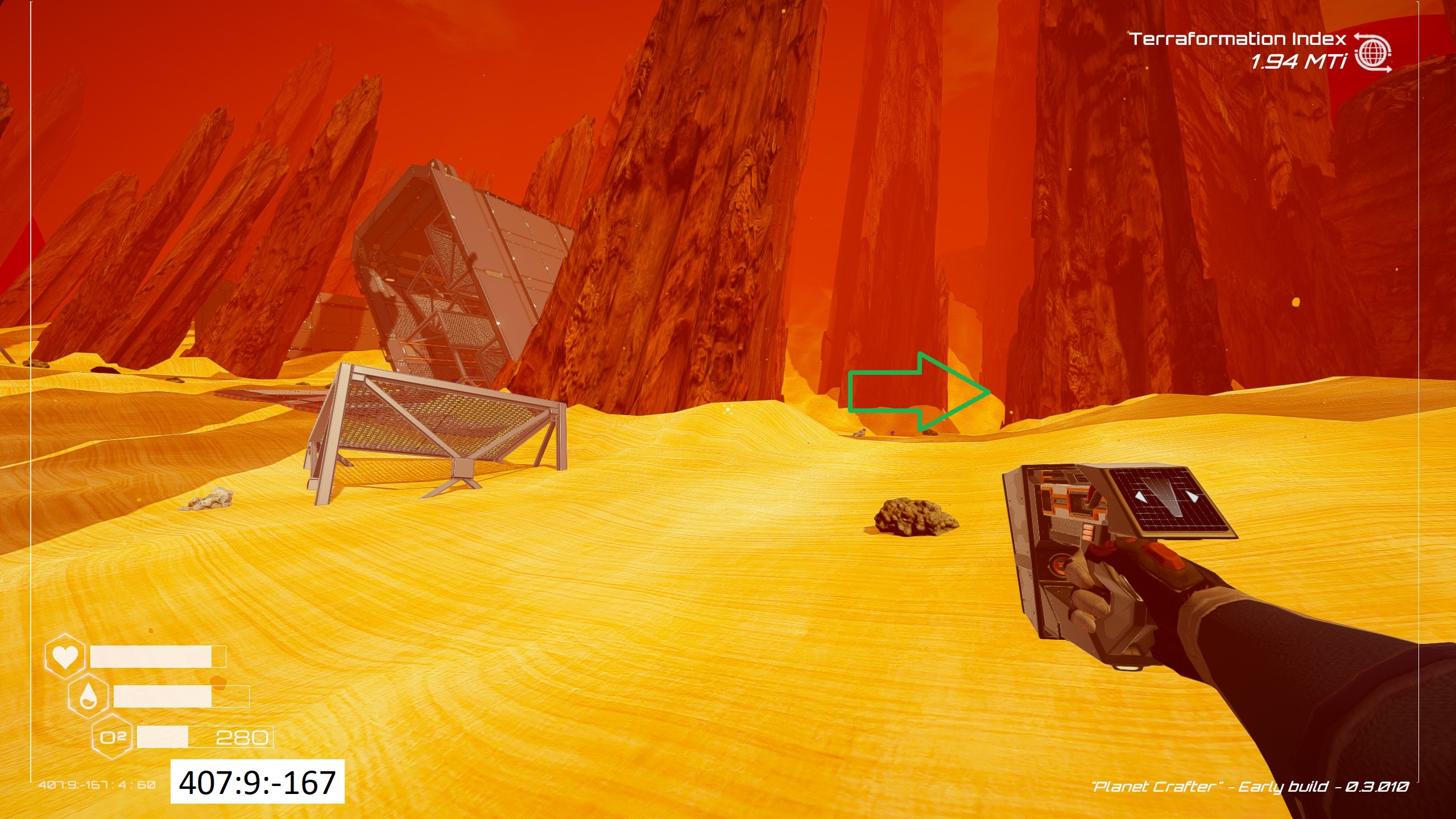 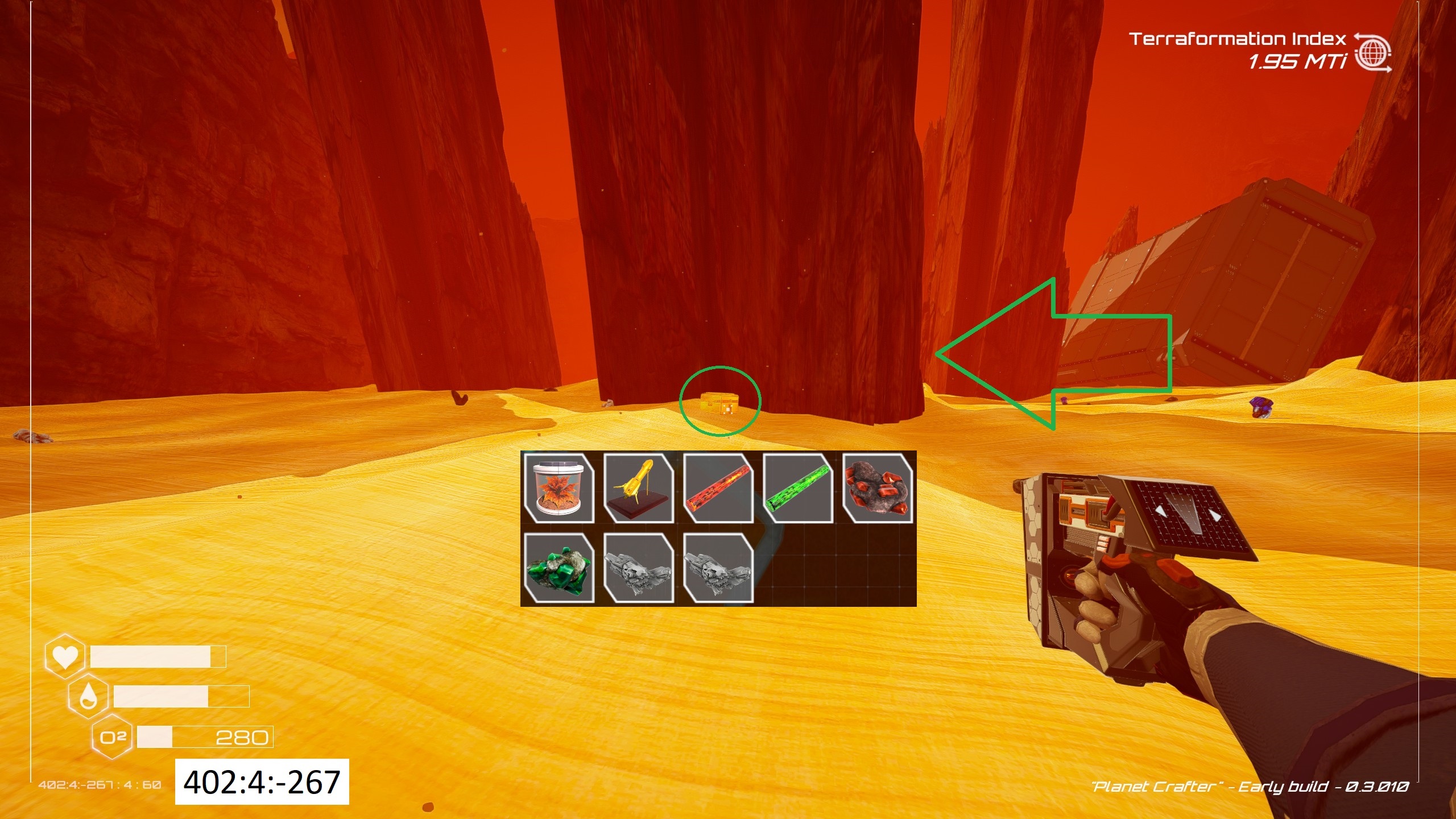 Located within a small rock cave near the south-west entrance, the cave at first seems empty, but keep pushing through and you’ll find it hidden behind a rock. 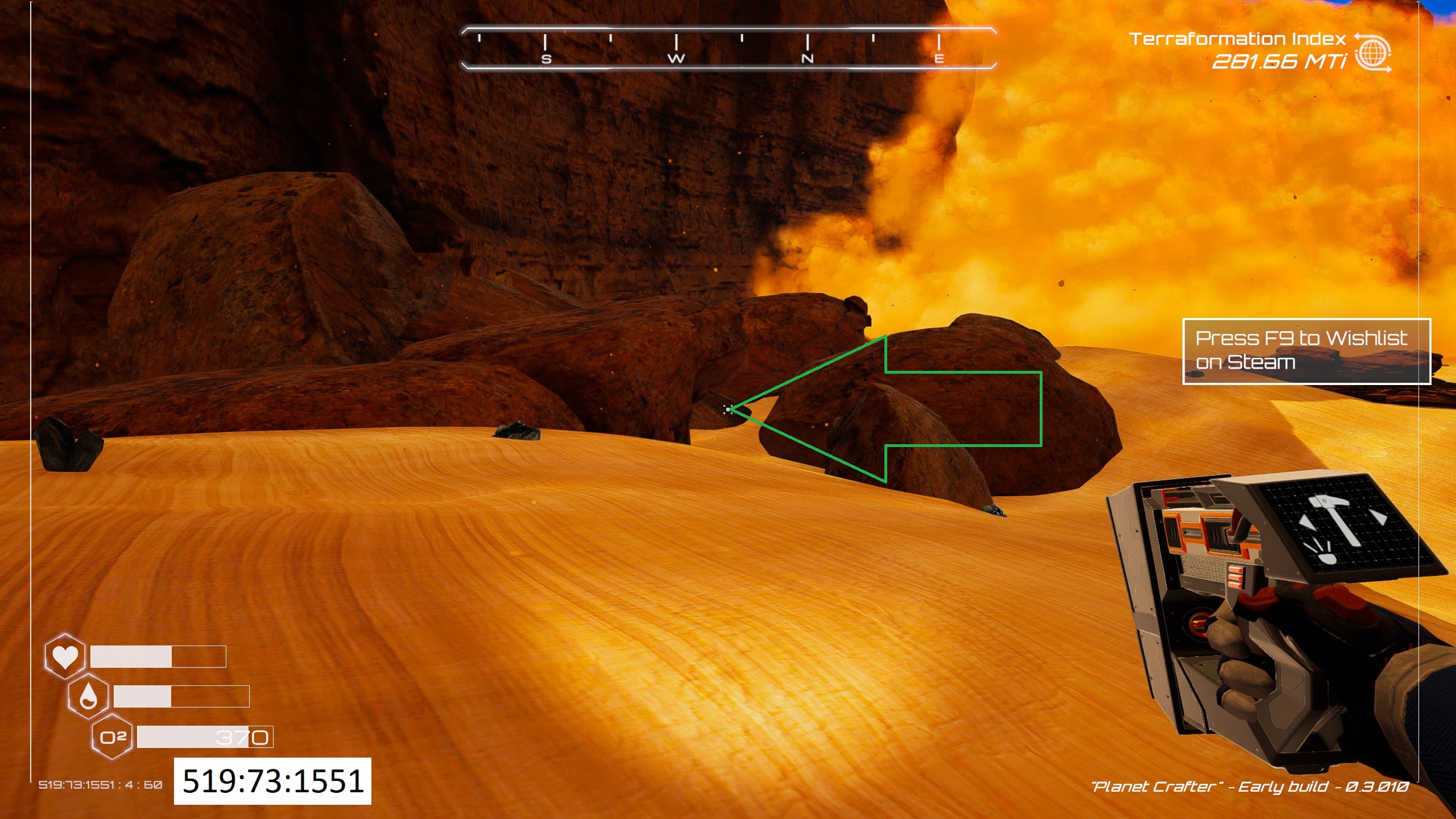 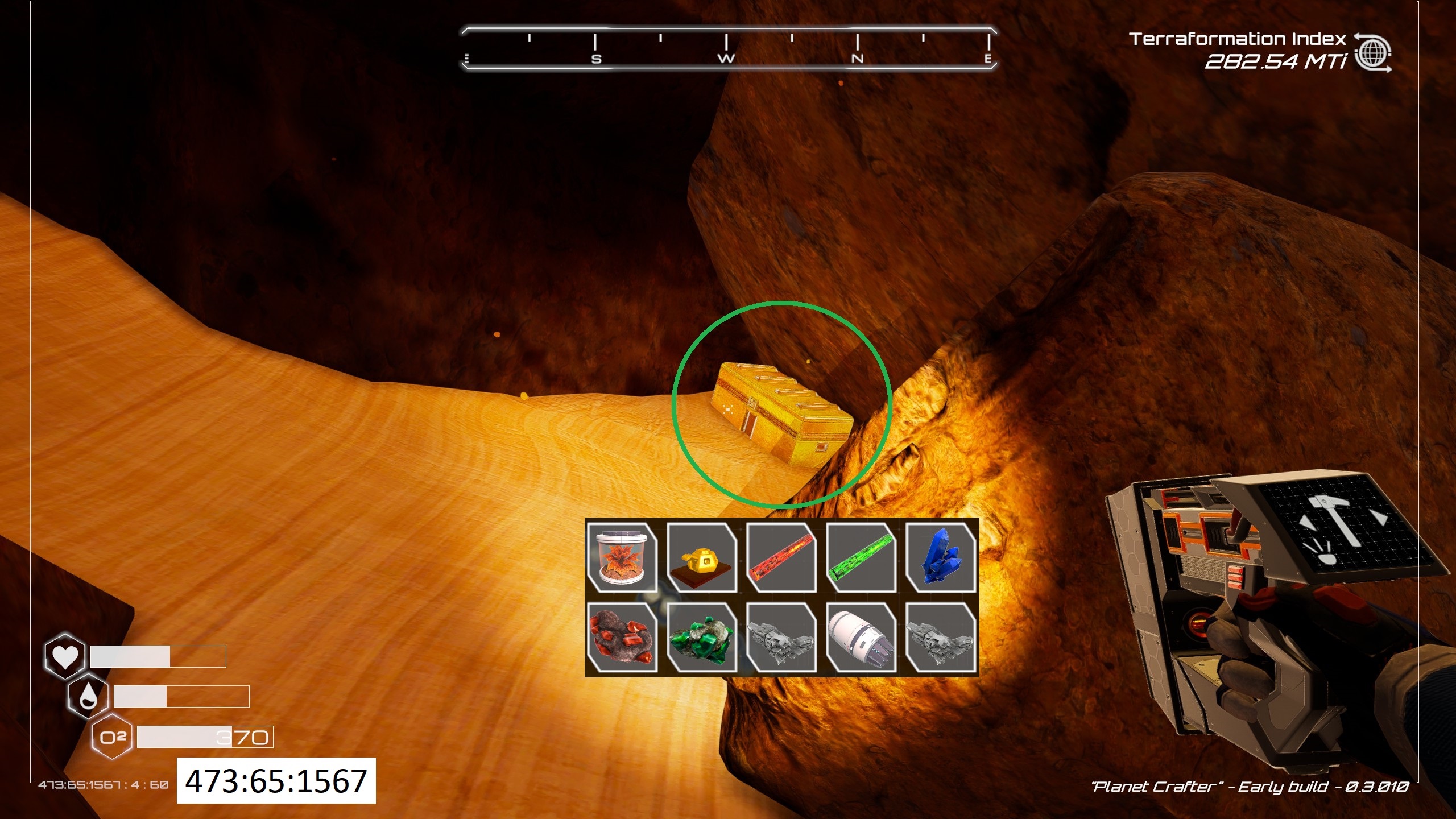 I added enlarged coordinates to the pictures, as although they do show the coordinates already, they’re a bit on the small side and difficult to read. I’m not sure the middle figure (height) has much bearing, but I included it anyway.

Hope you enjoy the post for The Planet Crafter: Prologue Eight (8) Golden Chests Location, If you think we should update the post or something is wrong please let us know via comment and we will fix it how fast as possible! Thank you and have a great day!