A brief guide on how to clear and what not to do. 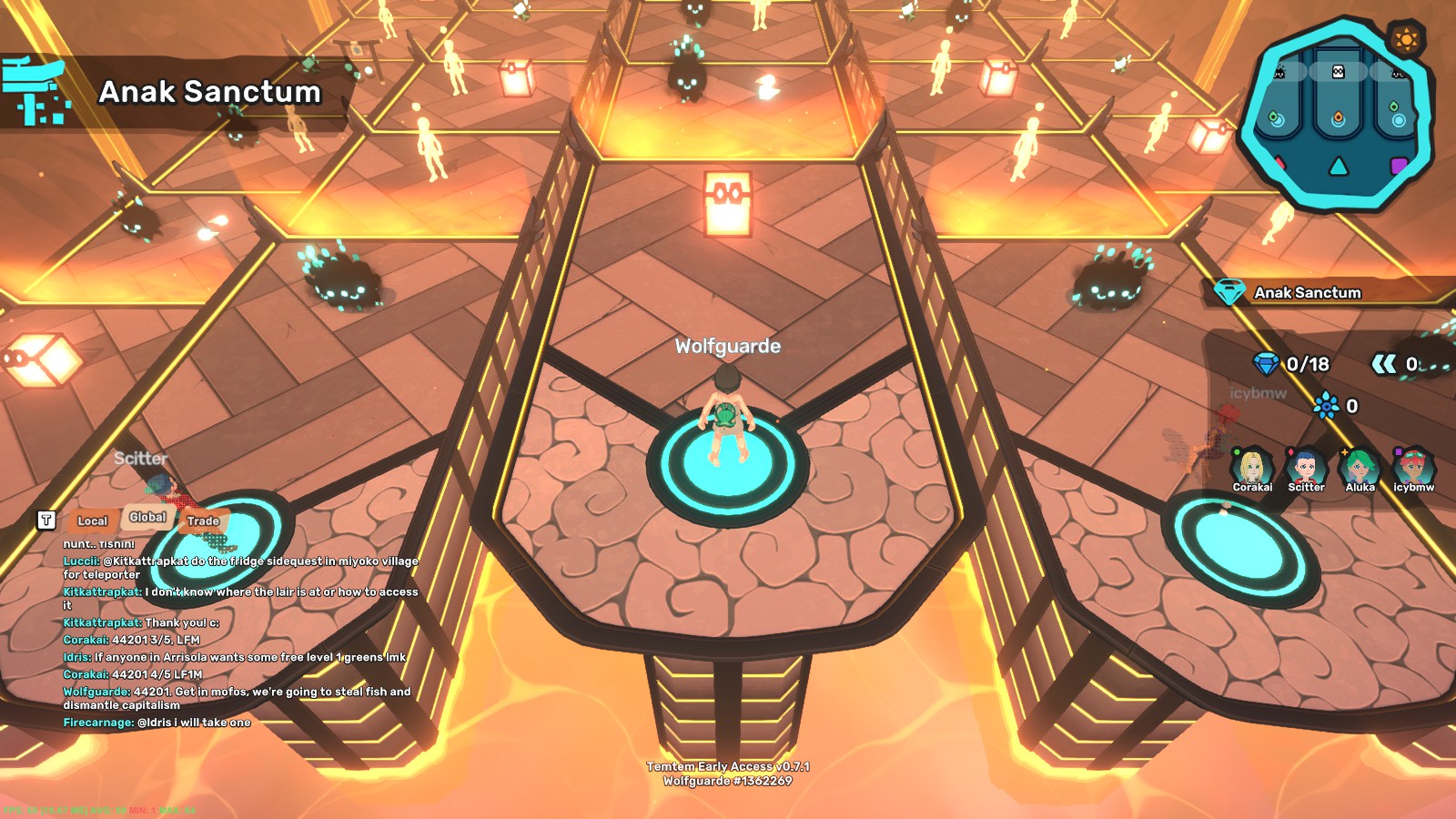 Lairs are the new 5 man dungeon content that released with Cipanku. While fairly simple and straightforward to clear once you know what you’re doing, the lack of a tutorial means a lot of players make their teammates’ runs harder or impossible to clear while they’re learning the ropes. Below are some simple tips to give you an idea of what to expect, what to do, and what not to.

The short version of this guide is as follows:

– You get nothing from a run in which you fail to acquire 18+/18 blue gems; do not revive if it will bring the total amount you and your teammates can acquire from a run below 18!

– Synstars are shared between all players – make sure to leave some for your teammates if they’re struggling!

– Pay attention to your game map and how your team is doing! You’ll know when you’re likely to clear a run with a surplus of gems, and therefore whether or not you or someone else can afford a potential revive, or to take a little more from the shop than you might otherwise.

– Make sure you start your run with at least 2 tems! It’s extremely hard (and sometimes downright impossible) to get past the first battle without a full front line.

A more detailed outline of the lair can be found below.

Once you’ve unlocked the dungeon (by taking a tem of the relevant type to each of the altars in Anak Volcano, two of which are inside the fire shrine), you’ll likely have found a room that looks like this: 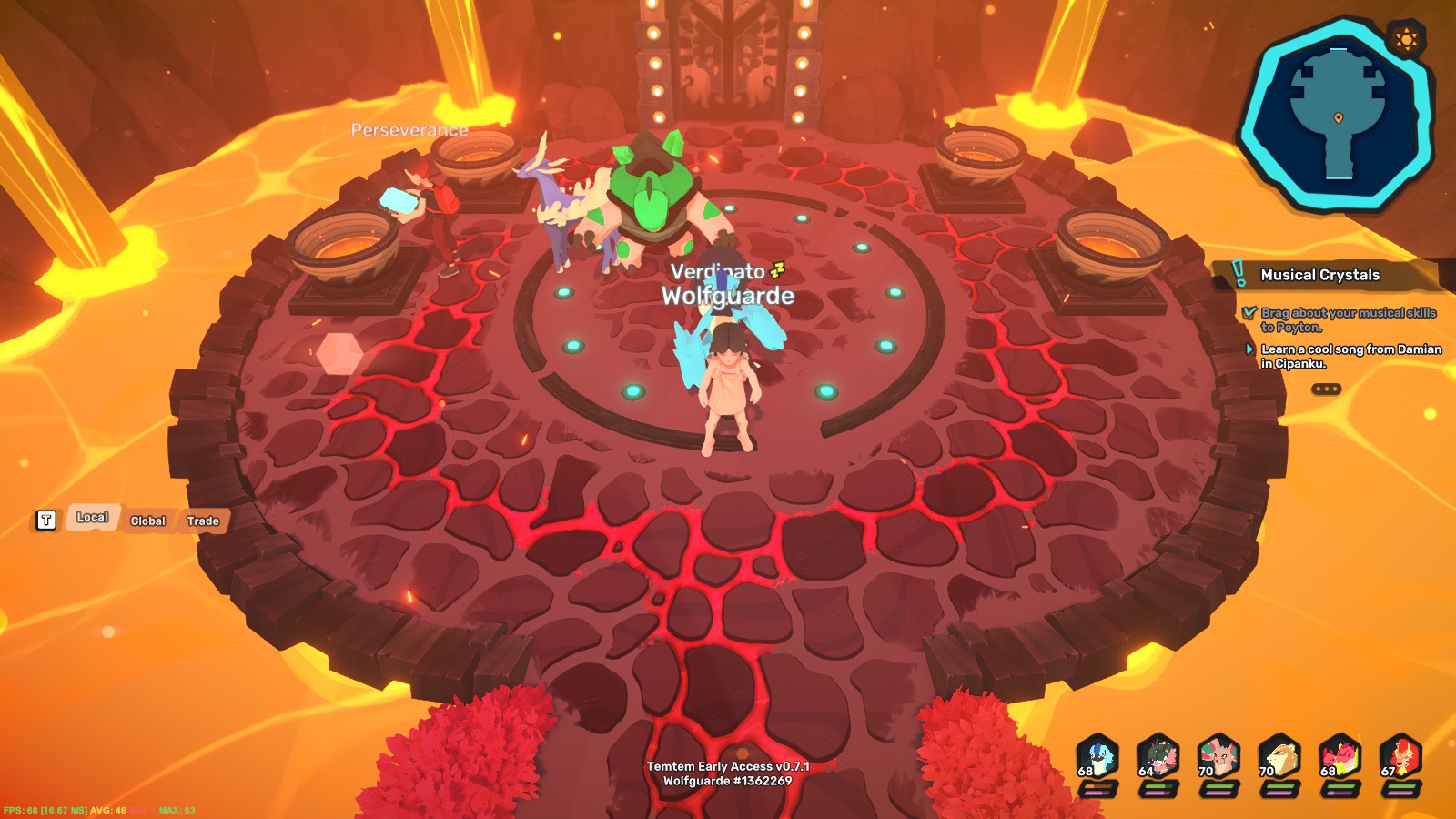 The braziers to each side of the door will, once the unlock conditions have been met, take you to a screen that looks like this: 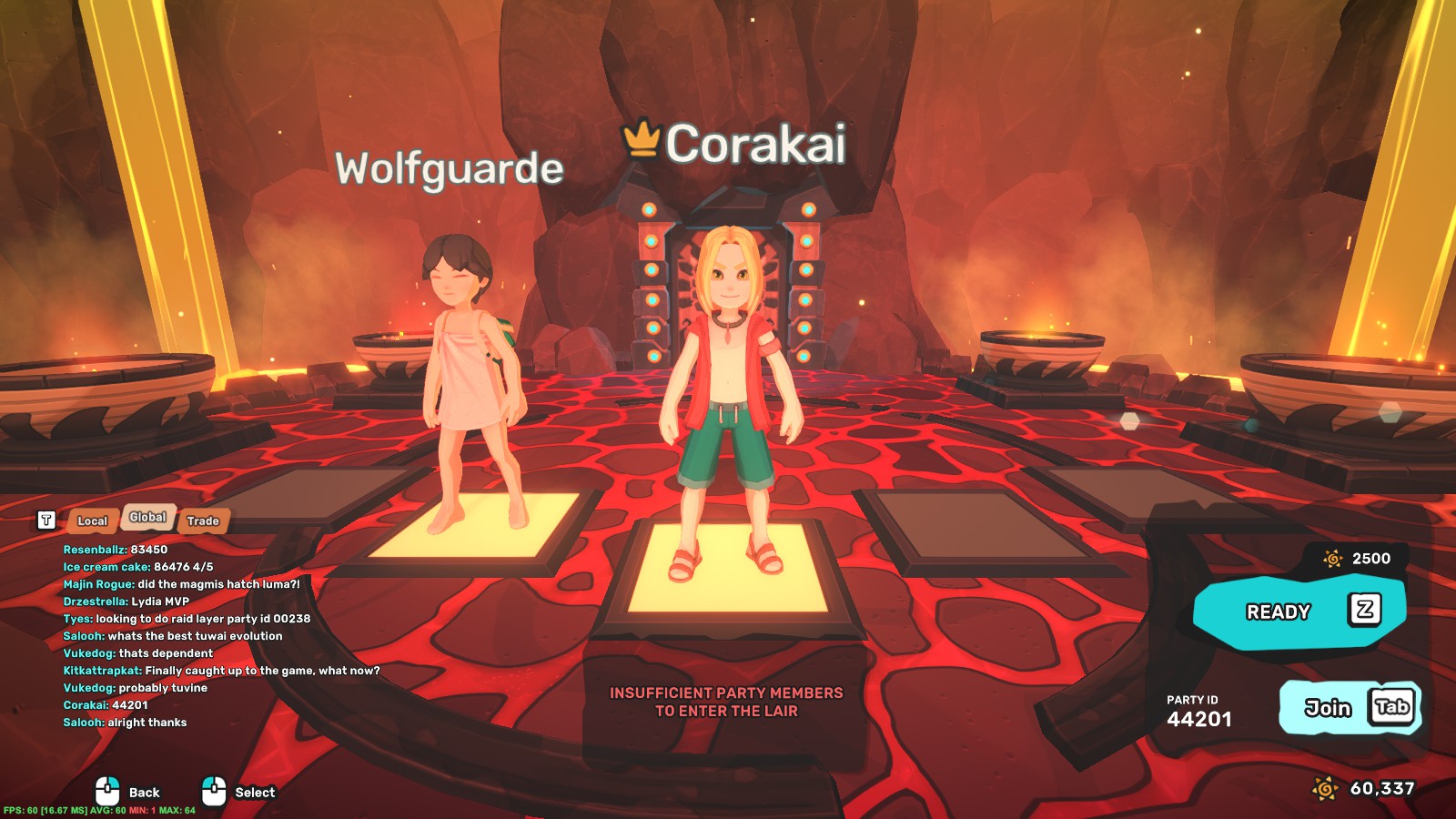 You’ll need 2500 pansuns to enter the lair, which can host up to five people per party. Once all party members click ready, everyone will be teleported into the dungeon.

A few things to note:

1. That warning at the bottom is there for a reason; it is statistically impossible to clear the lair with less than three people, and the less people you have, the lower your odds of success are. The RNG’s not great at the moment, and there’s non-trivial odds that at least one player will get screwed by it early in the run. If you can run with 5 people – particularly if you’re still new to the content – do so.

2. There’s no confirmation prompt for the host when everyone hits ready. Once everyone ticks it, you’re sent in even if your party isn’t full. It’s better to keep an eye on the lobby rather than hit Z and tab out.

3. In the absence of a LFG channel, local chat is good for picking up repeat runners to fill groups. Global should only be used if you’re not filling with recruits from local chat. Remember that there’s more than one instance of any given area, and you’re not seeing everyone that’s at your position on the map.

Upon entry, you’ll see something pretty similar to the picture in the intro. Each player spawns in a lane, and each of you needs to clear a gauntlet of battles with various tradeoffs, rewards and heals between. Heals are usually fairly widely spaced, and if you’re unlucky you can wind up type-walled in a single encounter or facing 2-3 battles back to back with a sub-optimal team. You’re always in the centre, so that you can see the lanes of the others in your group.

There are a few things worth knowing about before you push on into the run:

1. Gems: The blue gems are the most important resource in the lair. To clear the run (and to get any reward for the run), you need to have 18 or more of them. If you have less, it doesn’t matter how many of you clear your lanes. You won’t be able to get to the boss. They are also the revive currency if you lose a battle. Note that they are shared between all players in the party. Keep your eye on the gem counter at all times and be very careful with revives. It’s often better to forfeit a run so your teammates can clear than to revive and potentially throw the run for everyone.

2. Stars: The stars are called synstars and are your currency for the run. You get them from winning battles. As with the gems, they are shared between party members. The archways with three bottles floating in them are the shops at which you spend them; these shops disappear once used. If you’re doing well in your run, consider skipping the shop so that other party members who may be struggling can buy what they need to survive.

3. Perks: The double arrow icon is the number of perks the party has. These range from trivial to incredible, and come from chests and the twin orbs that circle each other. They’re a good choice when you’re confident in your ability to clear up to the full party heal, but you should generally prioritise survival over perk accrual.

Tems: Are the black clouds, and can be acquired from chests and post-battle rewards. Always get two tems at the start of the run where possible. You are virtually guaranteed to fail if you don’t. Tems come with every egg move and technique course they can learn, and as you acquire them you’ll be required to set their movesets up to proceed. They have roughly even TV spreads.

Chests: Can yield tems, items, gear, or perks. The contents can make or break a run… or be largely useless. RNGesus is fickle.

Orbs: The twin orbs will yield either a gift (a perk) or an offering. Offerings require a sacrifice of tems, gear, or squad health to acquire what is usually a decent reward. Be careful with these; halving your squad’s health or throwing in a random tem might in turn destroy your chances of clearing the instance, even on a relatively good run.

Shops: As mentioned above, are the arches with the floating bottles. One-time use, and must be interacted with to proceed.

Tamers: Come with 1-3 orbs above their head. These orbs represent their difficulty, and the amount of synstars gained. As of the time this guide was written, higher-difficulty tamers generally aren’t worth fighting; the payoff isn’t high enough to risk potentially crippling your party or losing.

Clearing the gauntlet relies on good planning, monitoring your team, and a healthy dose of luck. Use the (M)ap to plan your progress according to what you’ll need and what you can afford to take or give up to make sure as many of you reach the end as possible. If you need to, communicate with your team.. Even if it means waiting for them to get out of a battle before you proceed. Better to know for sure that someone’s going to need the 2-4 gems for a revive than to assume they’re good, skip a battle, and come up short at the end.

Assuming you’ve successfully cleared your lane, your party has accrued at least 18 gems, and you’ve taken the final portal, you’ll be able to interact with the pillar at the end. Doing so will bring you to the boss arena, and into battle with Tyranak. Our local dinosaur has 4-5 health bars depending on the perks picked up along the way through the gauntlet, is fire/nature typed, and tends to spam plague between hold moves. Front with a poison or flying type if you have them. Anything that can doom is useful if you’ve got an excess of items or a full team with minimal type disadvantage against Tyranak; if not, just go for damage or stack attack ups to chunk it down in as few turns as possible. Tyranak also knows extinction and will use it regularly as punishment for taking too long to KO it, so bear that in mind.

After clearing the fight, you’ll be teleported to a single-exit room with a chest. Once a week you’ll get a randomly generated Tyranak egg, along with a range of items of similar quality to the 5/5 fishing pool that are awarded every successful run.

That’s pretty much it. Good luck, and have fun!

Hope you enjoy the post for Temtem A Barebones Guide to Lairs, If you think we should update the post or something is wrong please let us know via comment and we will fix it how fast as possible! Thank you and have a great day!