Work in progress: work on this guide is still ongoing. Maybe now it looks like just a list of achievements, but it will not be so for long. Very soon, I will update each achievement with a detailed description and a screenshot or video explaining how to unlock it.

Thank you for you patience! 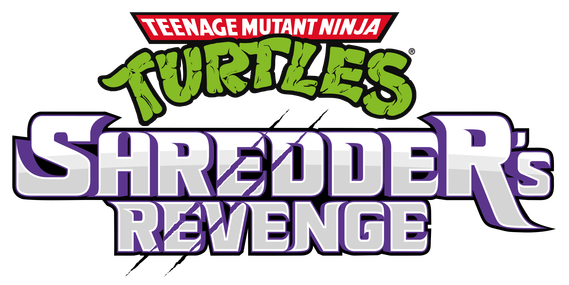 ● Required DLCs for 100% achievements: None.

Unlocking most of the achievements in the game will not be difficult, but among all there are some that can make you sweat because of their difficult conditions. Also, for some achievements related to multiplayer, you may need friends or the same achievement hunters as you.

There are 7 game endings for each playable character. Defeat the last boss to complete the game with every character to unlock that one. 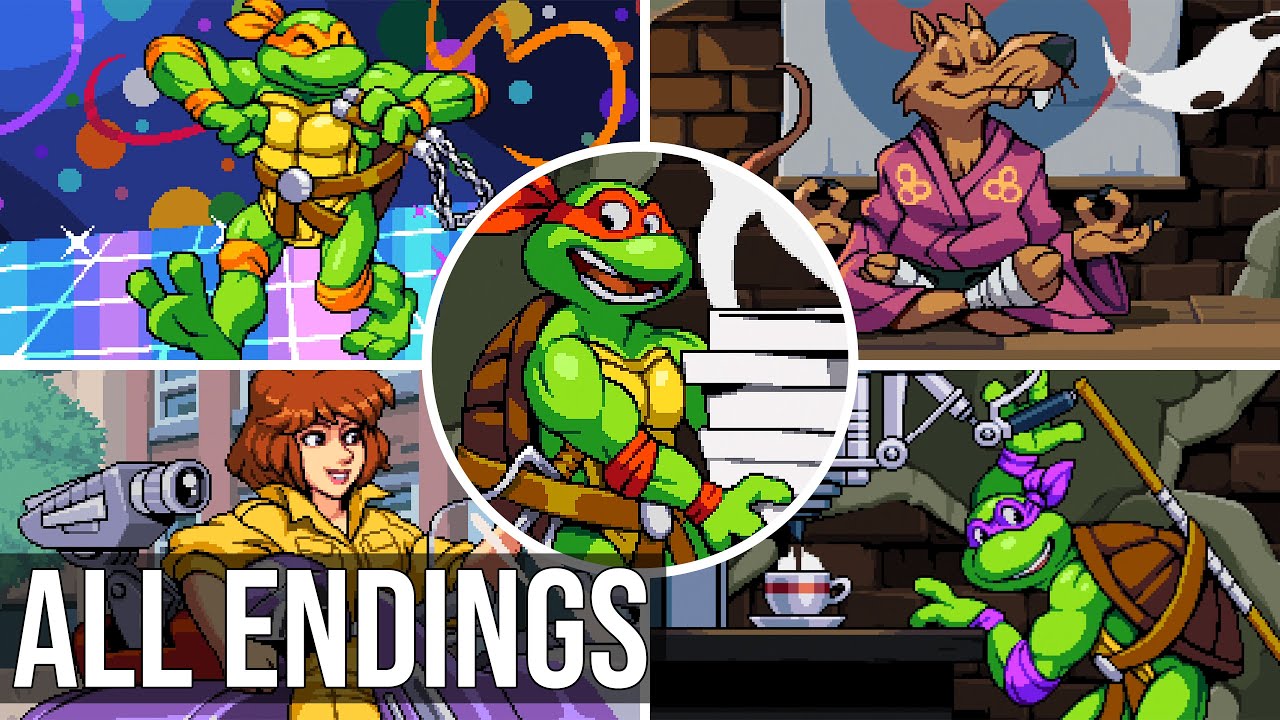 Cameos is a type of collectible items in game. There are 10 cameos, watch the video guide to see more info about how to find them all.

Finding a cameo will unlock a special character request, which you can see on global map.

Completing all 5 special requests will unlock this achievement. 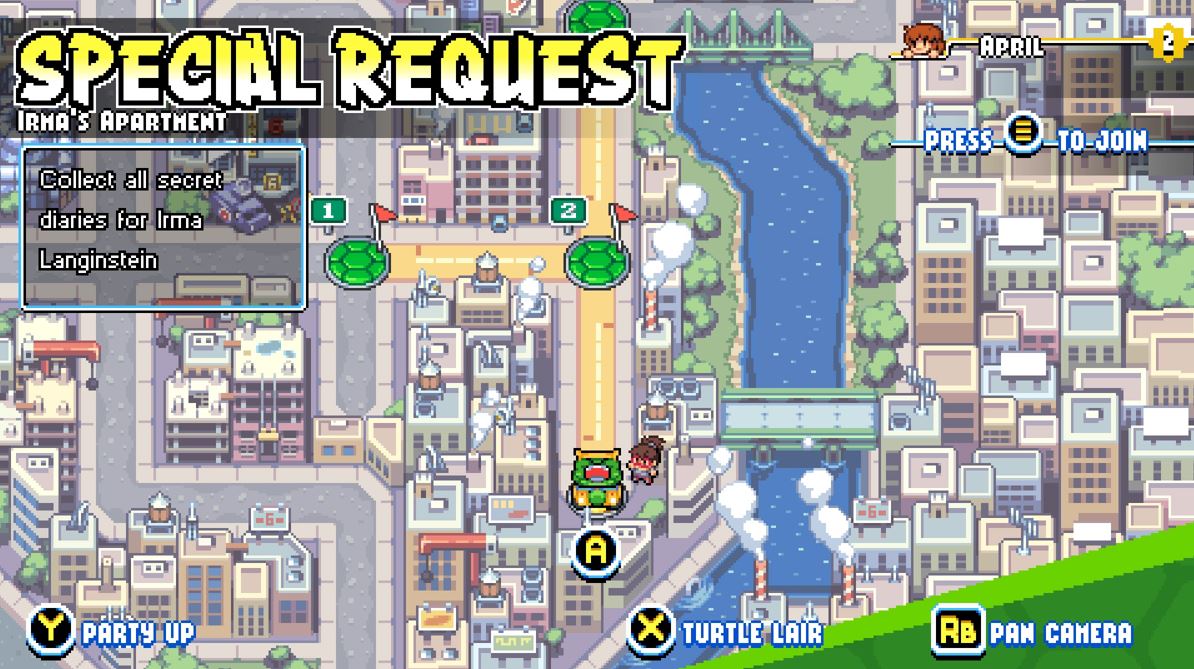 There are different types of collectibles in game.

You need to find only 5 different collectibles, but here is the guide with every collectible in the game. 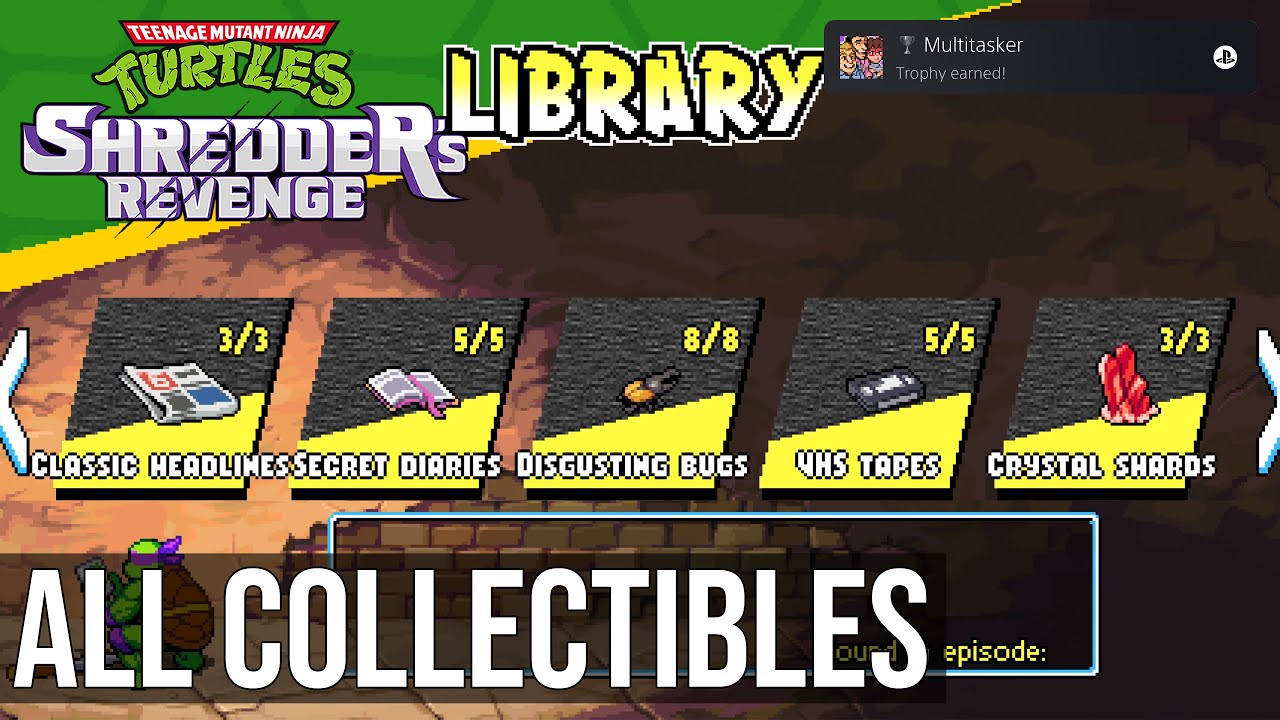 Press X on global map to open Turtle Lair and then go to Fitness Journal to see you character level and upgrades. Play story mode with different characters to upgrade all of them to max 10 level.

Press LB or CTRL (same button to revive a teammate) while next to your teammate to cheers him up.

Find boxes, barrels or any other objects to break. Sometimes you can find something useful for yourself. 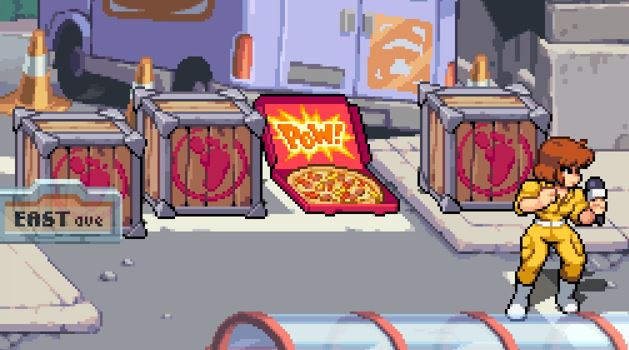 Rat King is the Stage 5 boss. Defeat him with Splinter (no need to make last hit, if you play MP). 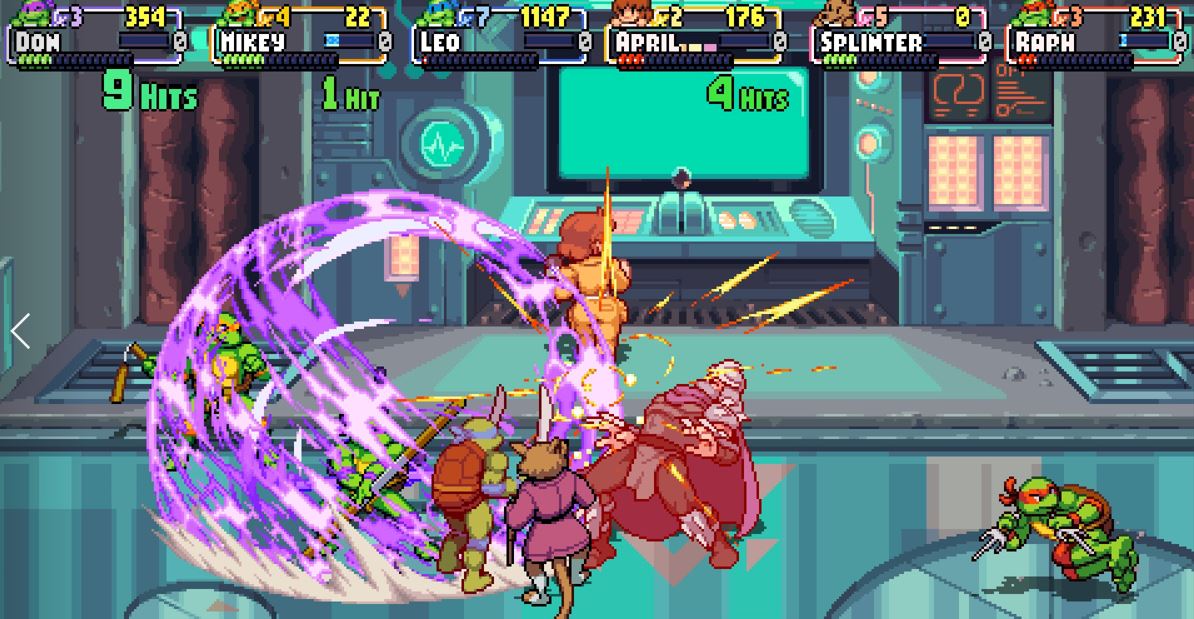 This technique will be taught to you at the 9th stage of training.

You will need to grab the enemy (does it automatically if you get close), and then down on the D-pad and X in order to throw the character into your screen. 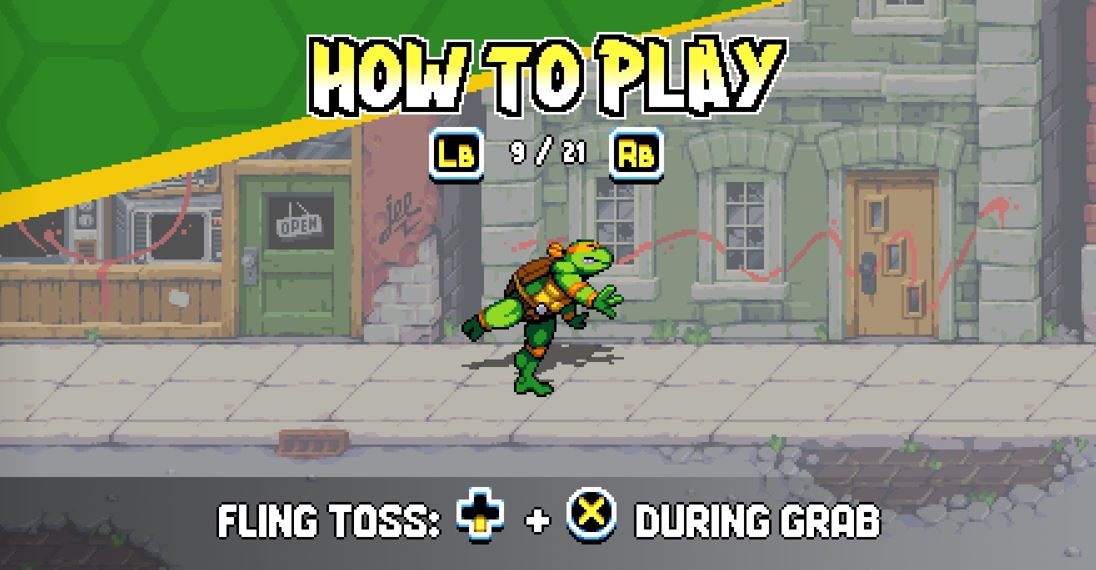 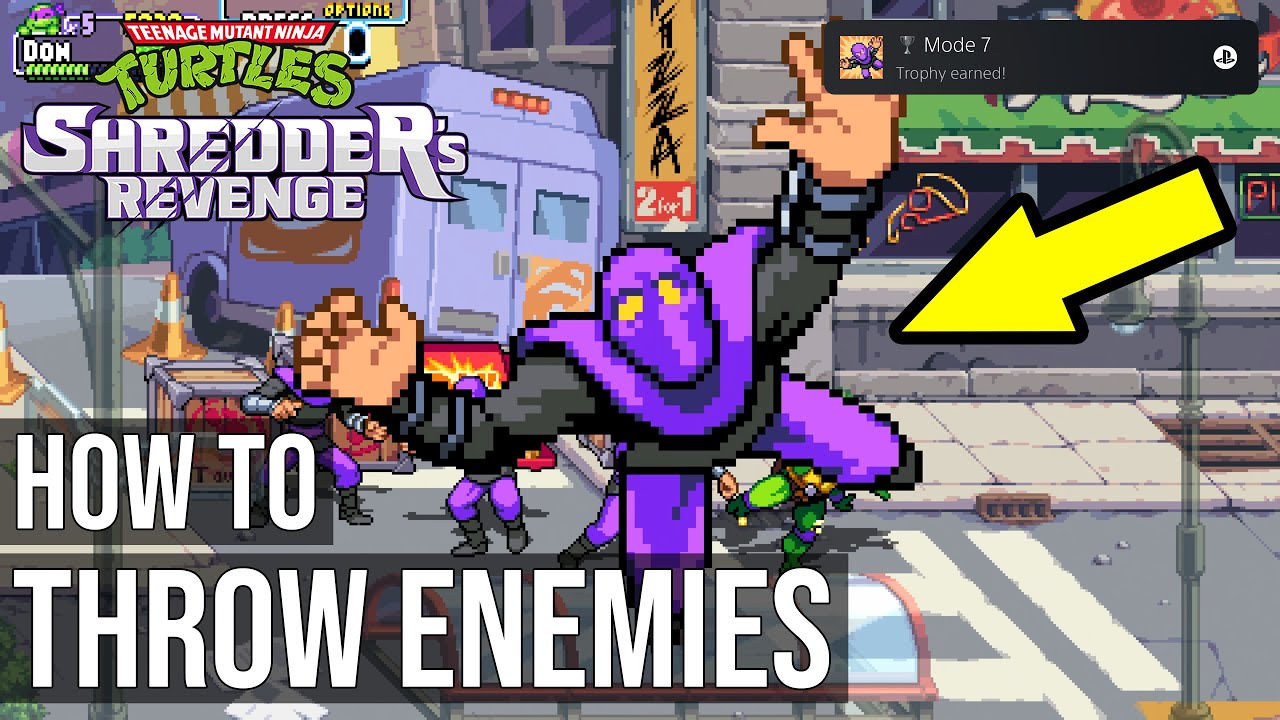 Each time you hit an enemy, you gain a multiplier that resets if you take damage or don’t hit anyone for a few seconds. This achievement is easier to get when playing solo. there will be enough opponents against you to achieve that much multiplier.

This achievement can be easily boosted by endlessly hitting the already defeated last enemy on the screen by playing fast character like April O`Neil. The main thing is not to let him fall to the ground and continue to beat him. 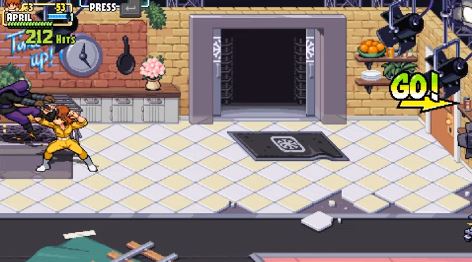 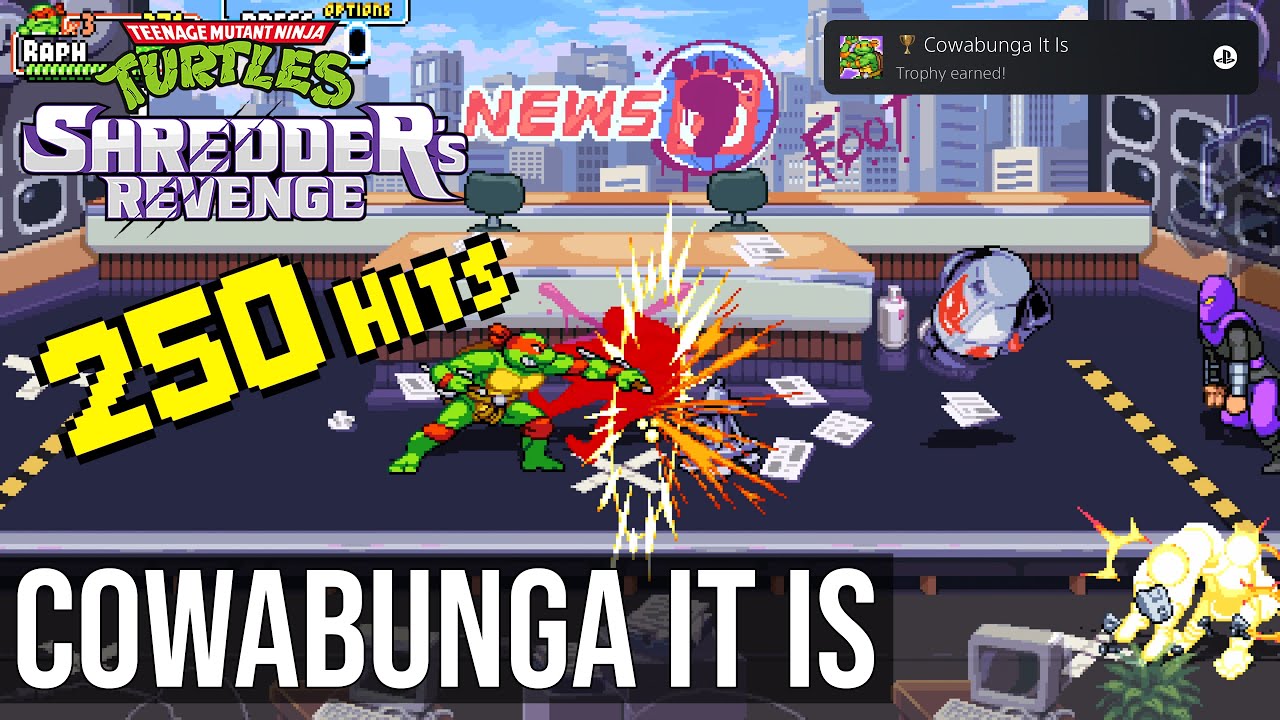 You can find pizzas all over the levels. There are several different pizzas in the game with effects for players: some heal the health of one character, some for the whole group, there is also a pizza that gives energy for super strikes and others. Simply pick to eat it.

Hit the projectiles to deflect it. 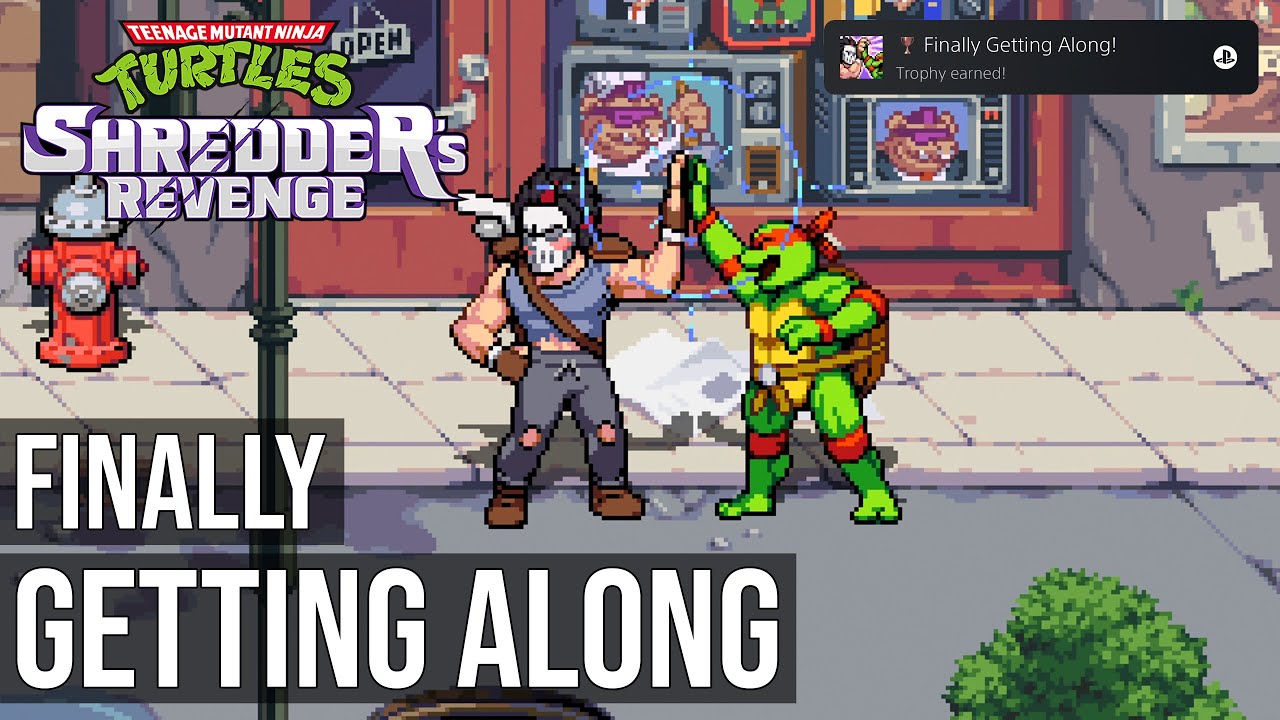 Press LB (or Q on keyboard) in characher pick menu to find lobbys with player and finish any level in party. 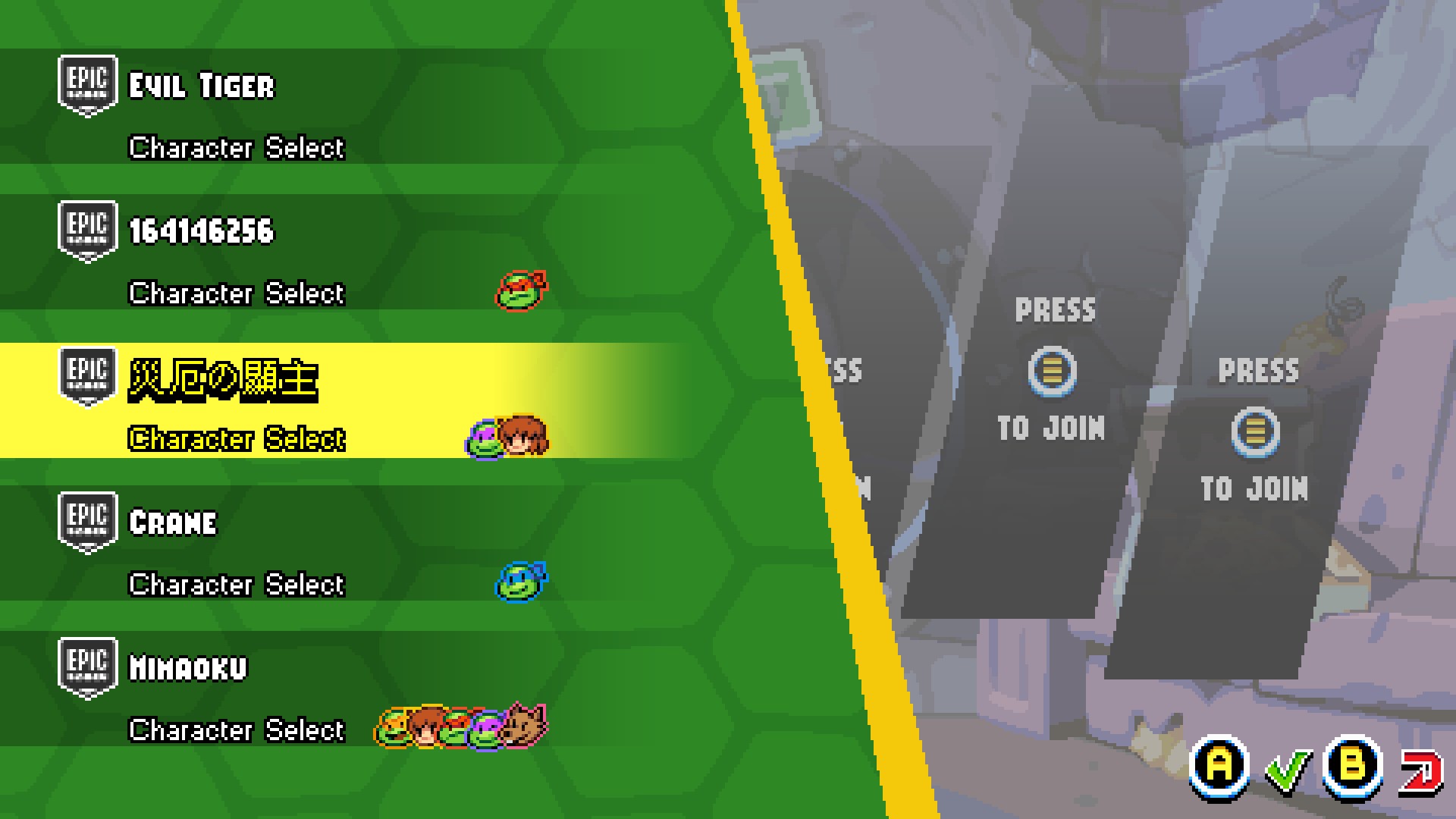 Beat the same enemy with your teammate 10 times.

When your ally runs out of HP, he will fall to the ground and you will have 9 seconds to pick him up. Press and hold LB (CTRL on keyboard) until the bar is full. 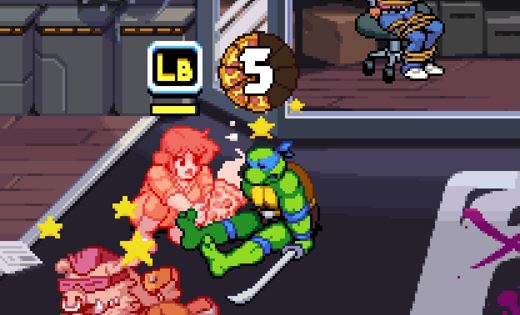 In arcade mode, you need to go through all 16 levels with one team with a limited number of lives, without continues and saves between level. If you lose — start from the beginning like in golden old days. Difficulty does not matter, you can go on the lowest “Chill” one.

PLEASE NOTE: It is not necessary to complete the entire game from start to finish in MP. It is enough to join an existing game towards the end of the game and defeat the final boss – Super Shredder 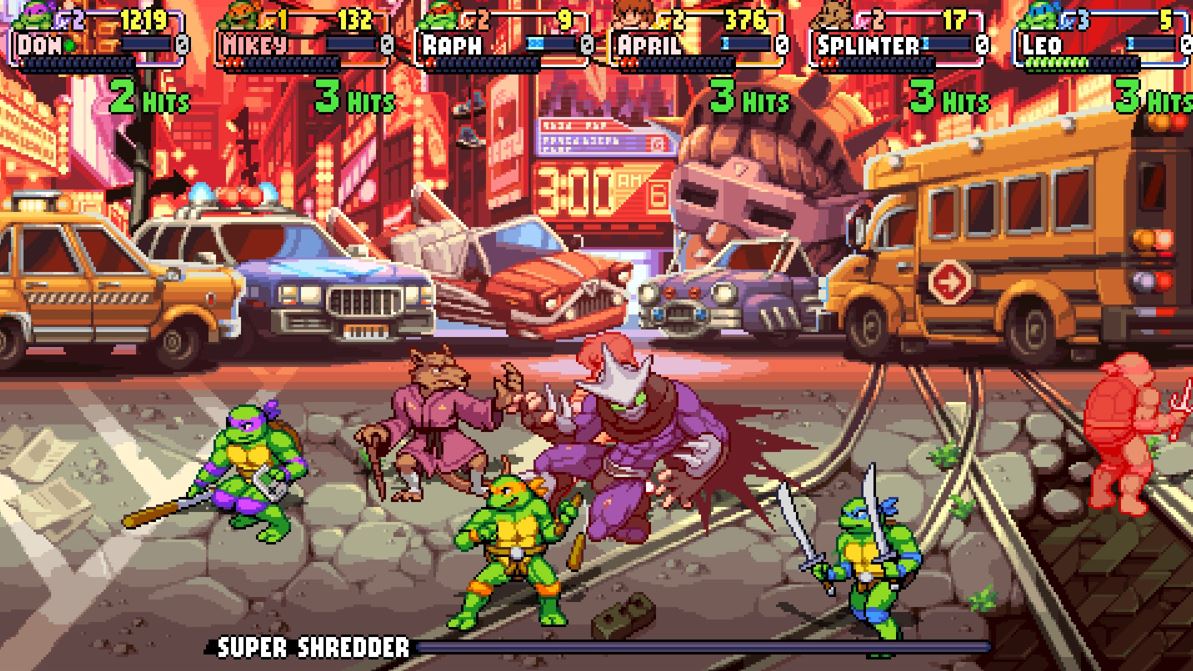 Press RB to use taunt and got hit from enemy while performing it.

Beat the Arcade mode on Gnarly difficulty to unlock this one.

PLEASE NOTE: It is not necessary to complete the entire game from start to finish. It is enough to join an existing game in MP towards the end of the game and defeat the final boss — Super Shredder. 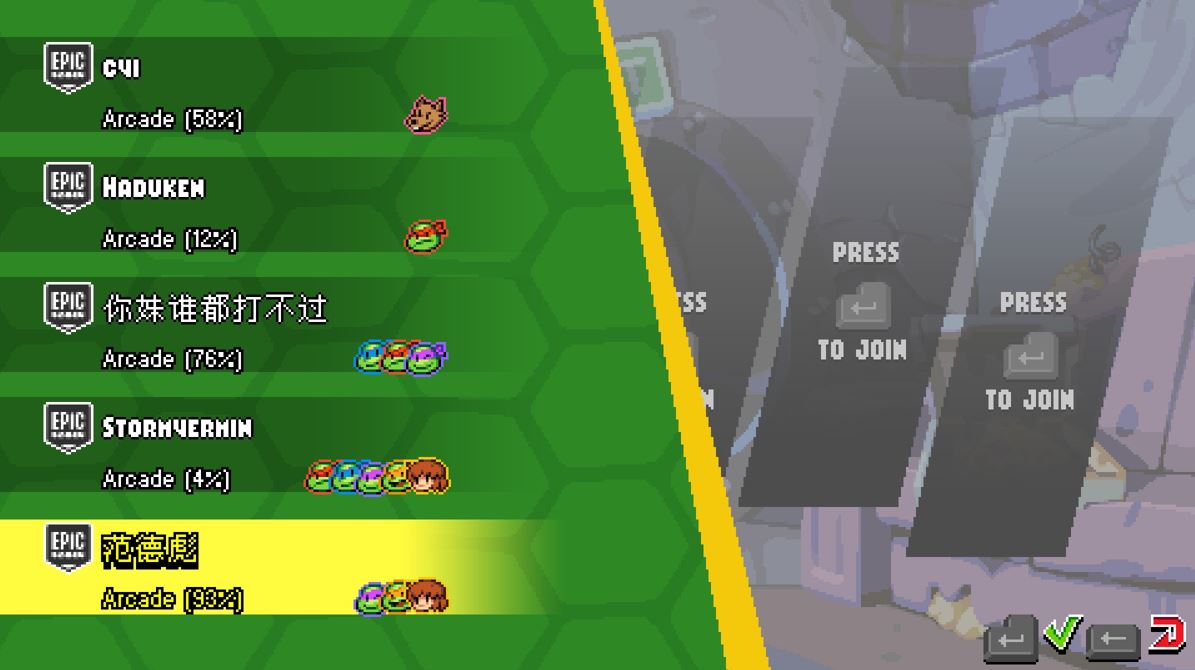 If you go to the game search menu, then there you can see groups of players and their progress in passing. Try to choose groups where there is free space with progress as close to 100% as possible.

See this number near your character’s head? These are credits. If your HP drops to zero and your team members do not have time to revive within 9 seconds, then your character dies and resurrects again, losing one credit. If you die when your credits are at 0, the game will end. All that is required is to complete the game without losing all your credits.

PLEASE NOTE: It is not necessary to complete the entire game from start to finish. It is enough to join an existing game in MP towards the end of the game and defeat the final boss — Super Shredder.

Once you complete episode 16 for the first time, Casey Jones is unlocked and ready for action. You can choose him via character selection screen. 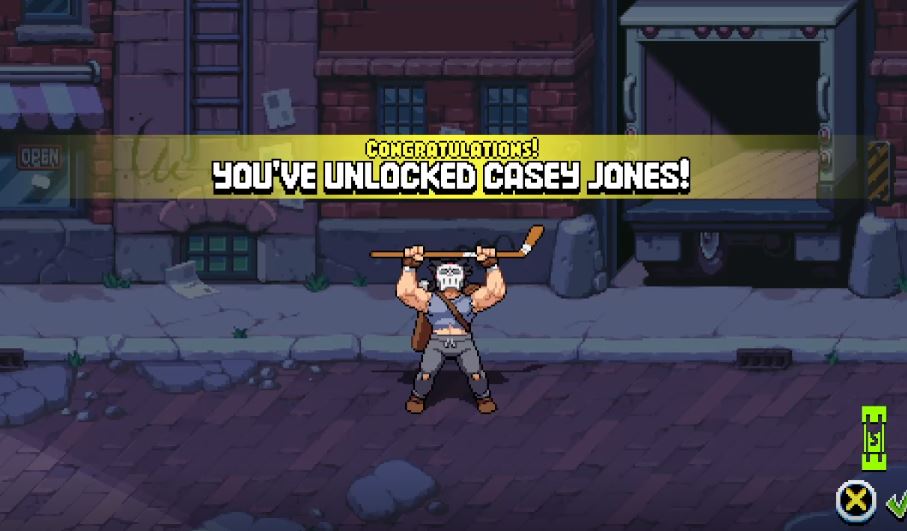 This one is really tough. Super Shredder is the last boss in the game and it is quite difficult and long to defeat him, not to mention not to receive damage from him. 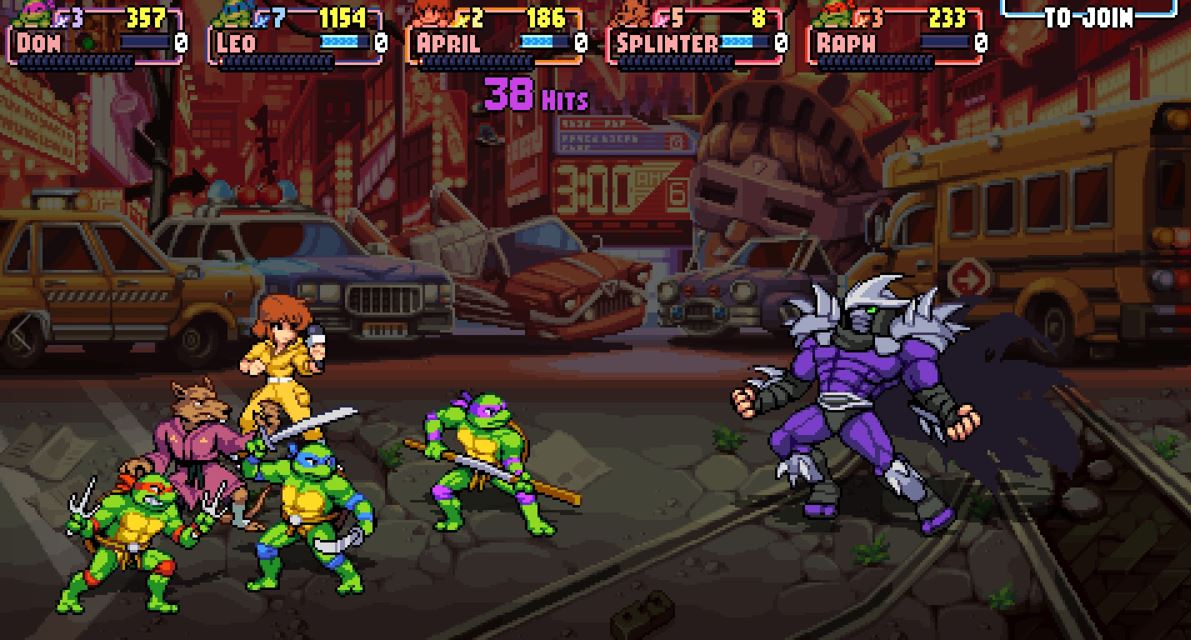 Most of the time he is immune to your attacks, dashing around the arena leaving a trail of green fire that deals damage and also radiates fire in all directions. After a flash of fire, he literally becomes vulnerable for a couple of seconds and then repeats everything again. 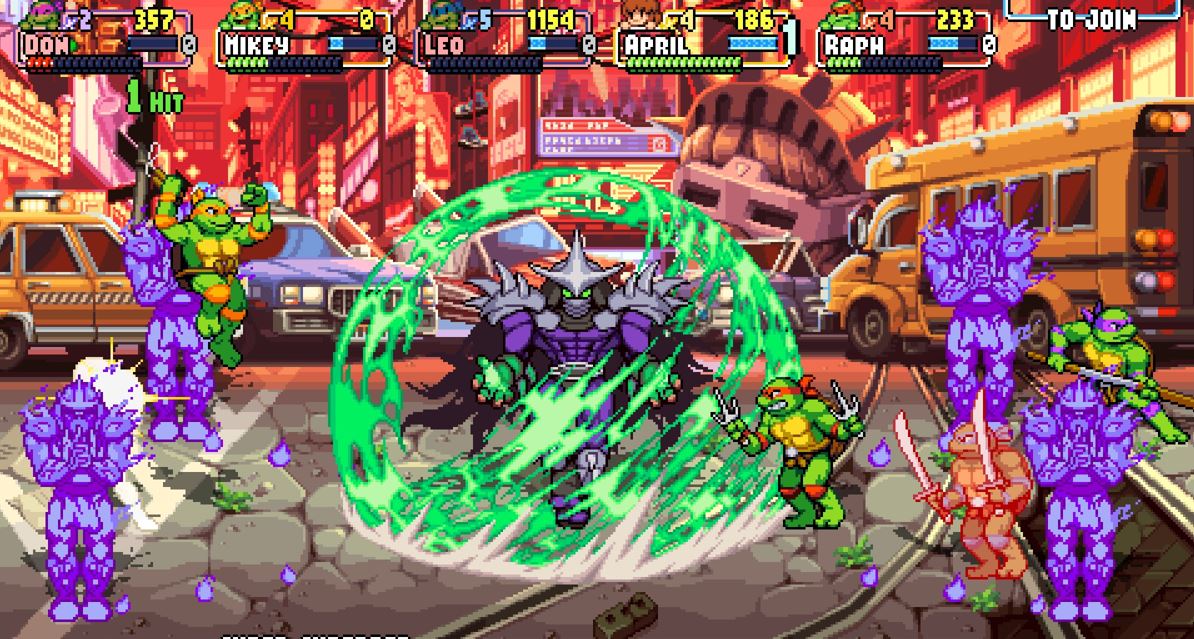 The difficulty is not to fall under his fire and emerge victorious from the battle. 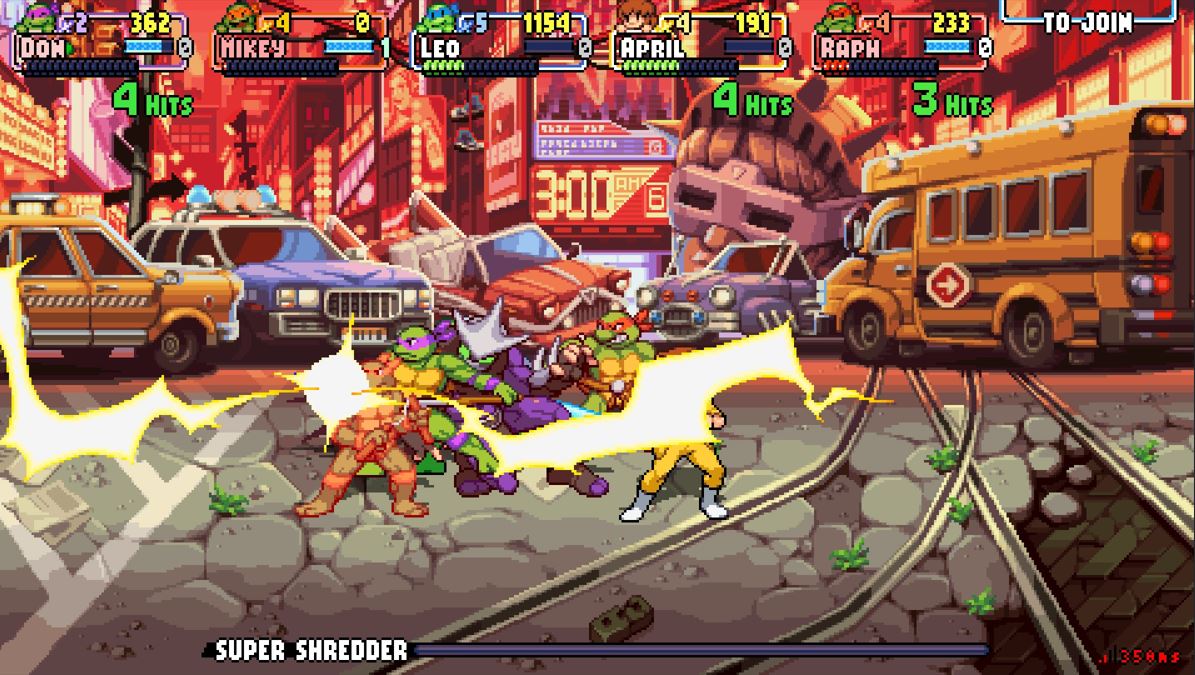 But I guess that playing solo is much more easier to unlock this achievement, check the video. 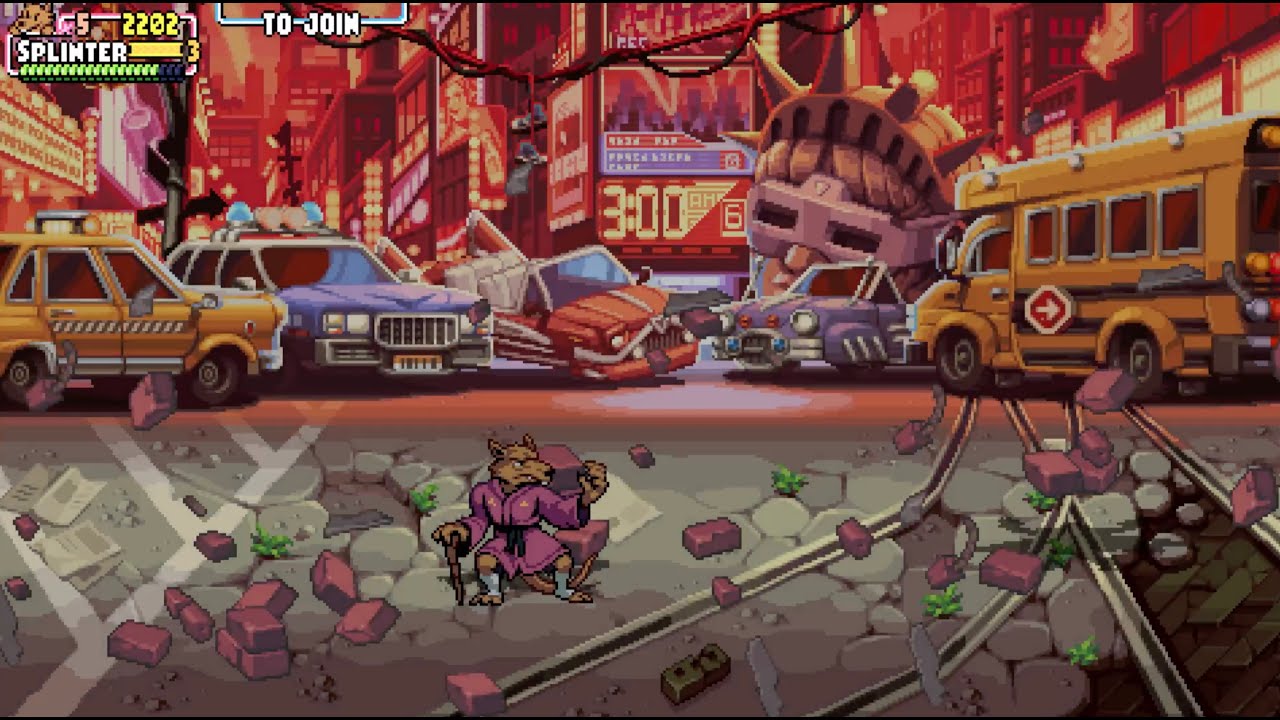 Please rate this guide and dont forget to reward it, if it was useful to you.

If something goes wrong — please let me know in comments below or add me to ask a question.

This is all for Teenage Mutant Ninja Turtles: Shredder’s Revenge All achievements comprehensive guide hope you enjoy the post. If you believe we forget or we should update the post please let us know via comment, we will try our best to fix how fast is possible! Have a great day!