This guide describes a way to eliminate all enemy squads in chapter 12 and get the achievement.

If you want to kill everyone, chapter 12 is arguably one of the most difficult chapters of the game.


However, if you just want to finish the mission with a rank S, this chapter 12 is also the easiest one since you just have to kill Teremor, which happens soon enough since the guy is eager for throwing himself onto your blades.


This guide is obviously not for this second goal. If you read this, you want the achievement.


So, this guide describes a way to get rid of every ennemy squad with a strategy reliable enough to not depend on RNG too much.


There are two phases in this mission, but you must prepare yourself long before this chapter to be ready, ideally since the very begining.


I will go more into details when I will explain the second phase, which is by far the most difficult phase of the combat.


This guide applies for the highest difficulty, which is Warlord at the time being (current version 1.0b2) and should obtain even better results in lower difficulties.

This is the easy part since after 11 chapters of levelling, your army should be clearly superior. The only challenges during this phase will be about to trick the AI pathfinding while avoiding any casualties, which is done with cautious positioning.


Jules’ archers on the south wall should be able to kill some careless Horsebows and Raiders.


Lock the right side with couple of decent squads to prevent your Home Base to be seized by the ennemy.


Send most of your best squads, including your MC to the left side. 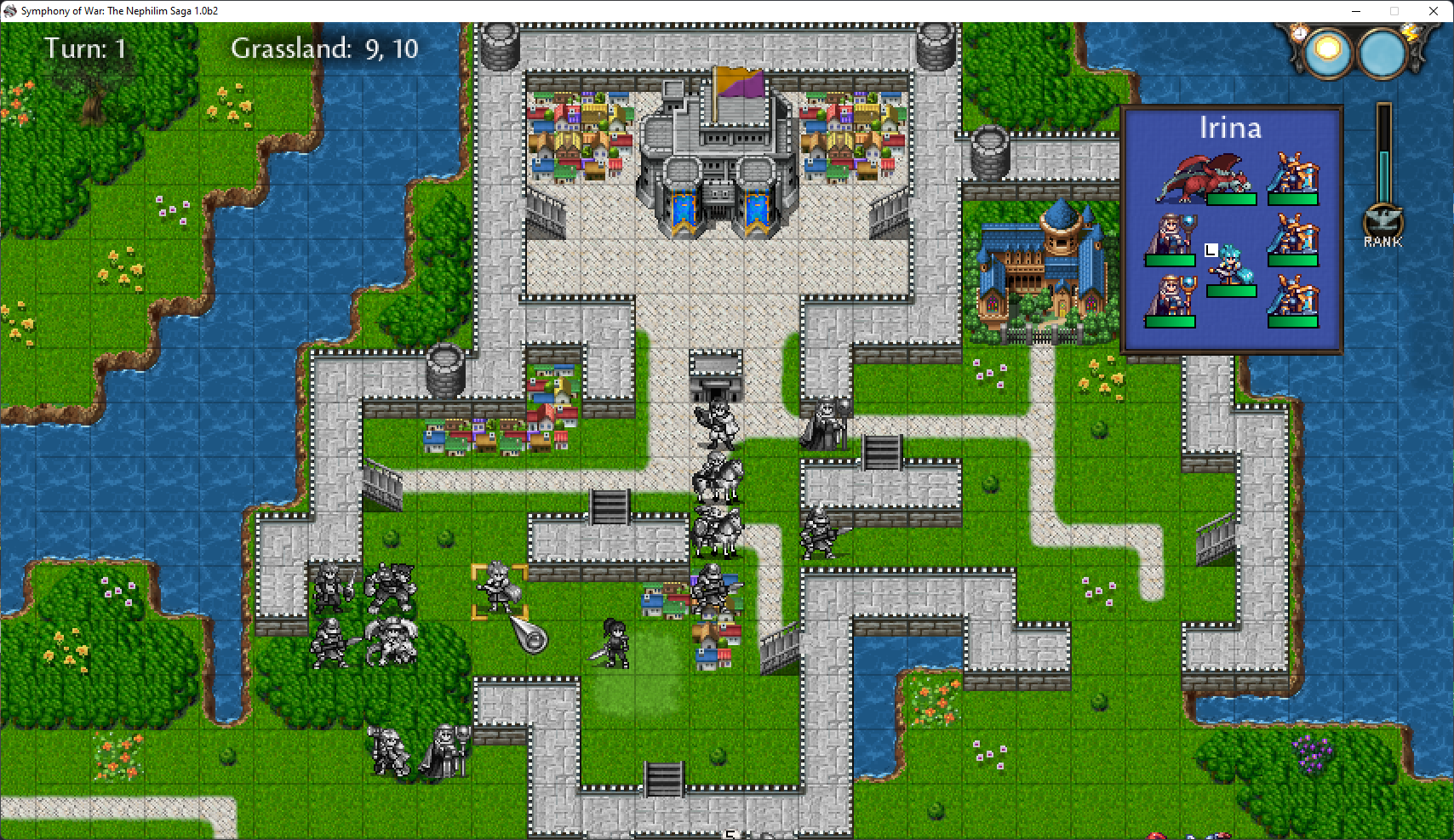 Setup to buy some time in the first phase


This setup will force Teremor to cross the entire battlefield, and let you the time to clear the map.


On this left side, woods will give you the opportunity to launch couple of ambushes (Stefan, Raskuja or Narima depending of your army of course) to attack safely.


Take care to open the timed chest before it disapears.


All in all, fighting Teremor’s army should be a funny surrender fest and except maybe few casulaties, this is not the real challenge of this chapter.


Once Teremor is dead, move your whole army to the bottom right corner within three turns. It’s wise to use this little break to heal up (and possibly revive some of your dead units in the Temple).


Also, don’t forget to stop by at the Bazaar at the south. If you have enough gold, you can buy some reinforcements for this battle.

The real challenge begins. In this phase, you will be outnumbered both in quantity and in raw firepower. 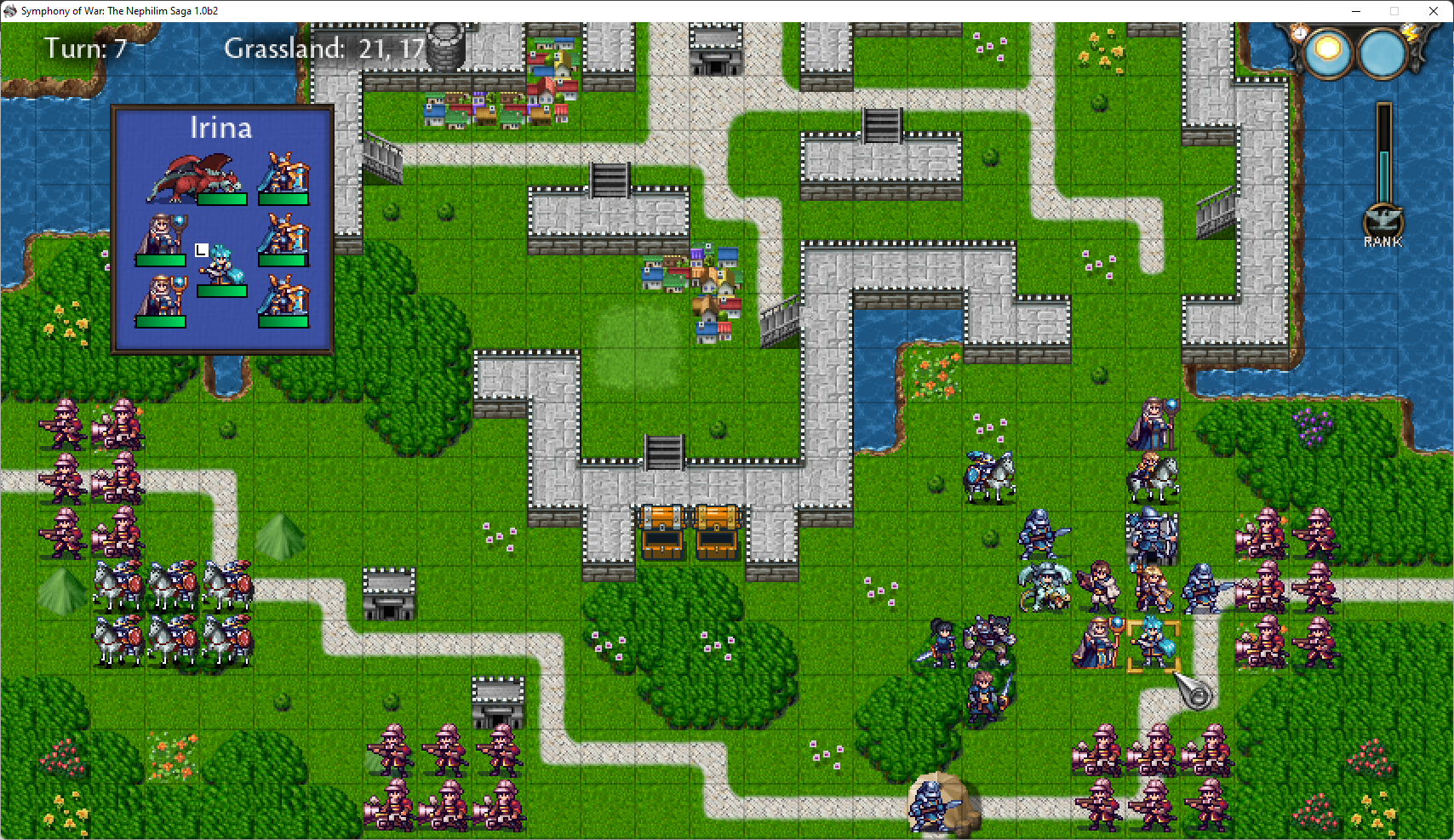 
An average Casamir squad threat is between 8k and 10k compared to the 5k of Teremor’s.


There are 3 kinds of enemy squads : 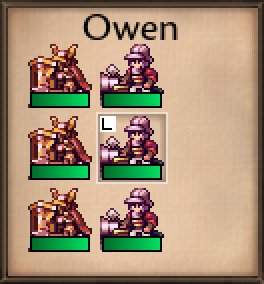 
A point to note is this squad has no healer. So any damage you inflict to this squad is definitive.


Against this squad I tend to use “Target Leader” tactic to open a breach to the leader, kill him, and make the squad surrender. 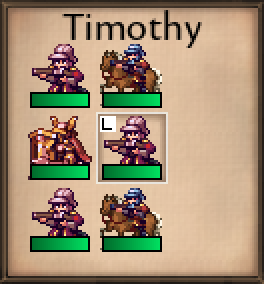 This squad deals deadly damage both during its offensive and defensive phase but lacks of survivability.


Like the Cannon squad, this one has no healer.


Against this squad I tend to use “Normal Attack” tactic. So my units are more likely to kill gunners in the front row, left and right, since they can cause too much damage, instead of wasting turns focusing the Sentinel if I were to choose “Target Leader” tactics. 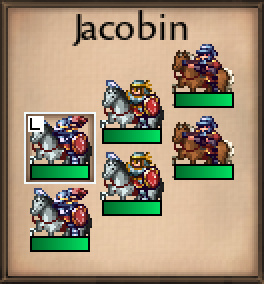 A very mobile squad, so don’t get surprised if they can reach you even from afar.


Knights are quite tanky and Valkyries can be annoying when attacking or healing. So this squad will not be so easy to get rid off. Hopefully, since its leader, in the front row, is begging for being killed, the obvious strategy is to make this squad surrender.


Against this squad I tend to use “Target Leader” tactic since I want to make this squad surrender right after.

At this point of the game, you should have something like 10 squads around 10k or above, with a good tanking ability, ideally, a front row full of Sentinels. For DPS, it depends of your preferences: you can go with Dragons (my personal choice), Fire Mages, Swordmasters, Zweihandlers or Champions.


My typical squad was: 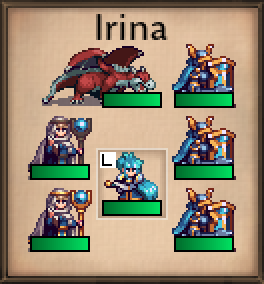 Sentinels really shine in this chapter thanks to their increased firearms resistance. You should try to have at least one squad with a full row of Sentinels.


The advantage with Dragon over physical DPS is that the Dragon’s breath bypasses armor, which is quite useful against Sentinels protecting the cannons. Also, in early game, when ressources are scarce, Dragons have the good idea to not require sunstones, gems or ingots for upgrading.


Mages are also very powerful in this chapter since like Dragon‘s breath, magic ignores armor completely. Also, a Fire Mage can sometimes one-shot first turn a full row of cannons. Pretty handy. But the drawback with Mages is they are quite long to raise. At this point of the game, quite early, you shouldn’t be able to get enough sunstones for turning enough of your Apprentices into Mages. I tend to favor having Templars before.


Aside of your main squads, your remaining forces could be under 10k, but you should try to maximize their survivability (HP, armor, SKL, healing)


You can field up to 15 squads simultaneously. Needless to say you must engage no less than that to get the achievement.


It is also a good idea to prepare more squads (5 or even more) to deploy them later for replacing your squads destroyed in combat.


In terms of artifacts, it depends a lot of your luck during previous chapters, so you should not rely on some specific ones for beating chapter 12. Just put your best artifacts on your best squads.


Also, in the current version I’m playing, 1.0b2, some artifacts don’t work and so are useless. So when they are fixed, I suppose this should make this chapter a little bit easier.


Some would have obtained the Temporal Modulator, which is an extremely powerful artifact, but very rare. For instance, I never got it yet. Hopefully, this artifact is not mandatory to beat this chapter and get the achievement, although it helps a lot.


If you succeeded to get one Saint Theresa’s Bulwark, which is not that rare, it would be a good idea to put it on one of your top squads (which should probably be MC, Diana or Abigayle) to increase its survivability. But it’s still optional.

If you followed the guidelines about Phase 1, your squads should be at the bottom right corner. There are two reasons for this:

Your main goal will be to destroy opponent deadly cannon squads before they can act.


To spice up the challenge, you not only need to kill all the squads to get the achievement, but also to do it within 6 turns after Casamir’s army shows up. So don’t take your time too much…


You will have to identify your key squads, the ones you must not lose to reliably kill both cannons and gunners. This is generally the MC, Diana, Abigayle, and a handful of others. During your defensive phase, these squads should avoid ennemy fire as much as possible to keep their destructive power intact.


On the other hand, you will have to identify your expandable squads. Those who may cause some useful damage, even maybe kills during the first turns of this phase, but whose main purpose will be to attract the enemy fire, and so being killed in the end. RIP. Simply put, these will be litterally your cannon fodder to allow your most precious squads to survive.


When you lose a squad, you should immediately replace it by another one from your Home Base. This new squad will probably be very weak, but this is not important. You need this kind of squad to aggro the opponent and let your main squads to kill the cannons and the guns when it’s your turn.


During this second phase, don’t try to revive your units. This is both a waste of money and time. Permadeath is disabled in this chapter. Just ensure you replace your dummy squads by new ones in reserve, put them in the range of the enemy’s cannons and guns, ideally within forts or on rough terrain for improved survivability.


Then, when it’s your turn, strike back with all your might by killing cannons first. 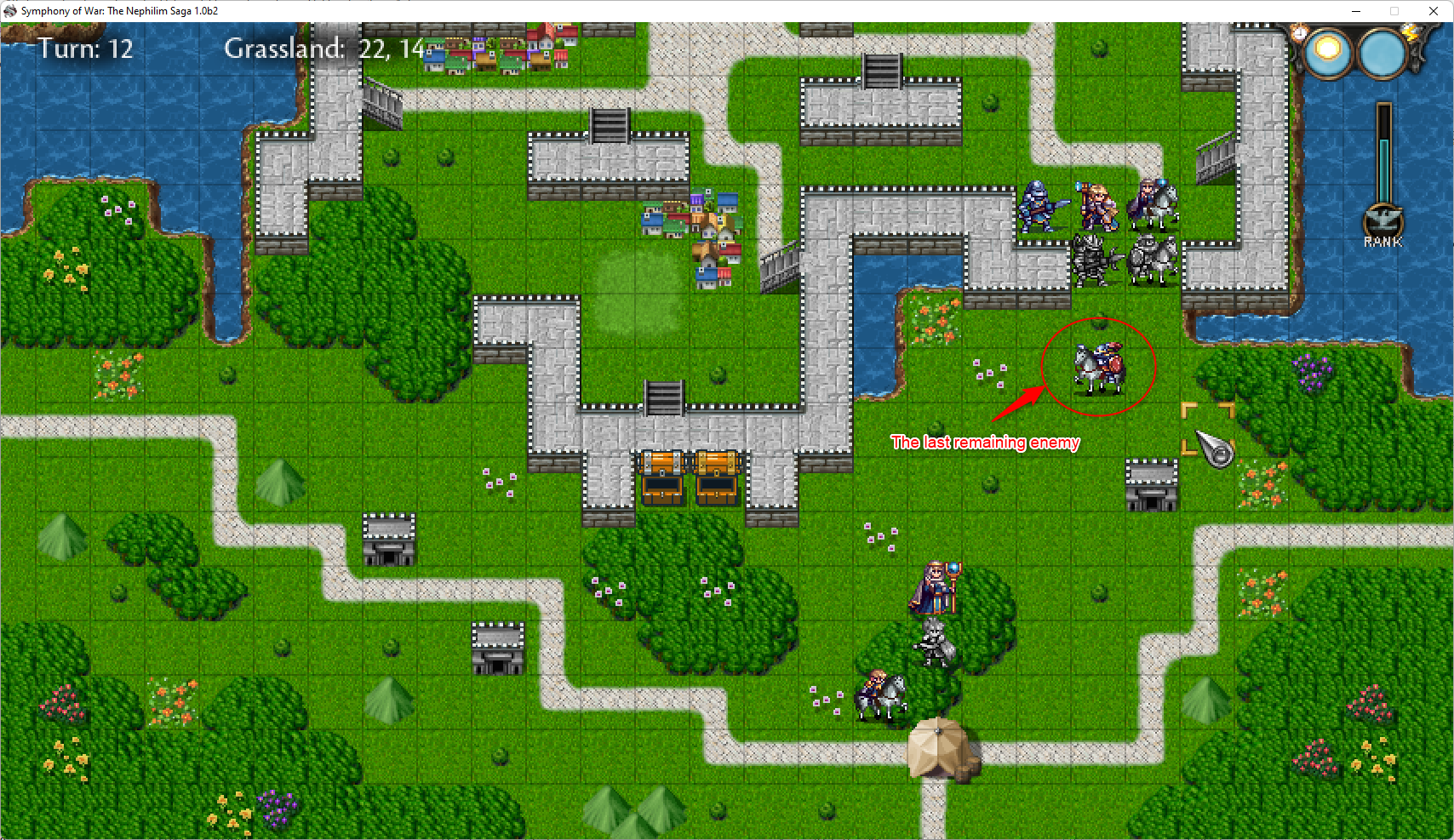 An instance of an endgame 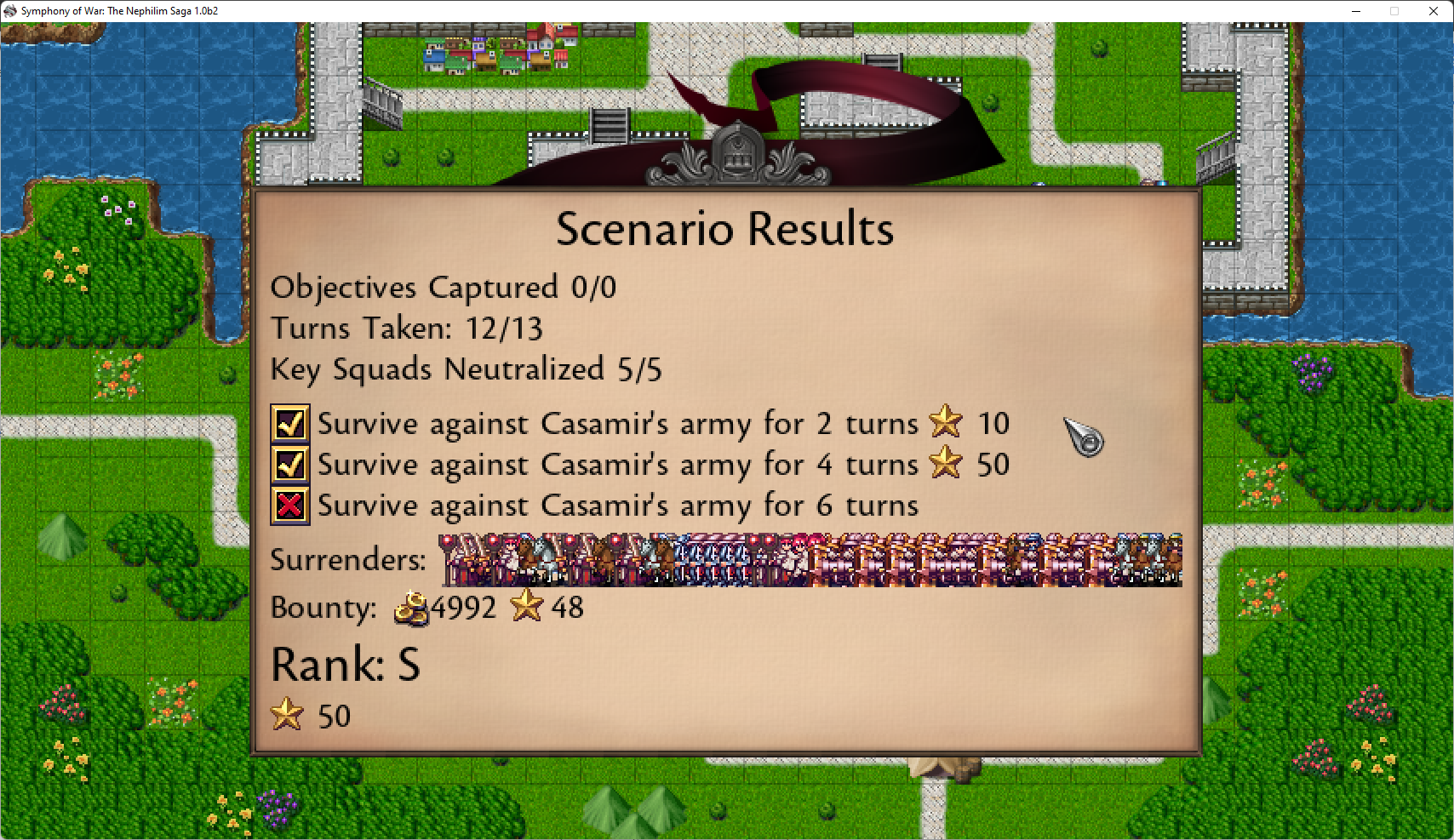 Scenario results (with a bug until 1.0b2 since we did more than surviving…)

So, with a powerful and tanky enough army, prepared since chapter 1, some reserve squads to replace your losses (there will be), a wise positionning and squad movements, in the end, you should be able to defeat Casamir’s army completely within 6 turns, and claim the achievement.


All of this without spending hours savescumming to get some powerful artifacts or units at the shop.

This is all for Symphony of War: The Nephilim Saga How to eliminate all enemy squads in chapter 12 – Achievement Guide hope you enjoy the post. If you believe we forget or we should update the post please let us know via comment, we will try our best to fix how fast is possible! Have a great day!