“It is, unquestionably, alive.”

With the release of Sovereign Edition, an exotic engine has been added into Sunless Skies. Follow this spoiler-light guide to obtain it!

To be able to start the quest, you need to travel to Pan, the hub port of Eleutheria, while having the Tisiphone engine equipped.

The Tisiphone is accquired in Sky Barnet inside the Blue Kingdom or Pan in Eleutheria for 6,000 Sovereigns – a hefty amount of Sovereigns, and I can see this step being the biggest barrier of entry for most players.

Once you have the engine equipped, you should see the option to talk to an Admiring Engineer in Pan – he will send you to the Wreck of the Berrenger, which is near Langley Hall.

Once you arrive at the Berrenger (which also gives you the opportunity to learn the Unassailable Founder’s secret and get an achievement for it), you will have to bribe her bodyguard to let you talk to her.

This can be done through a Cryptic Benefactor, donating a Selection of Immaculate Souls or having Affiliation: Academe of 4 or more.

Once the bodyguard has let you through, you can talk to the Diabolic Contriver – click the option of creating an Experimental Engine and you’re on your way.

The Contriver will require the following ingredients for making the Devourer:

7 Casks of Navarantine Gemstones (can be purchased at Piranesi, in Eleutheria)

The soul of a Griever – vanquish one and click the “collect soul” option. Grievers are often found mingling the “The Dregs” area near Pan.

Return these ingredients to the Diabolical Contriver in the Wreck of the Berrenger, and she will build the Devourer of Distances for you. 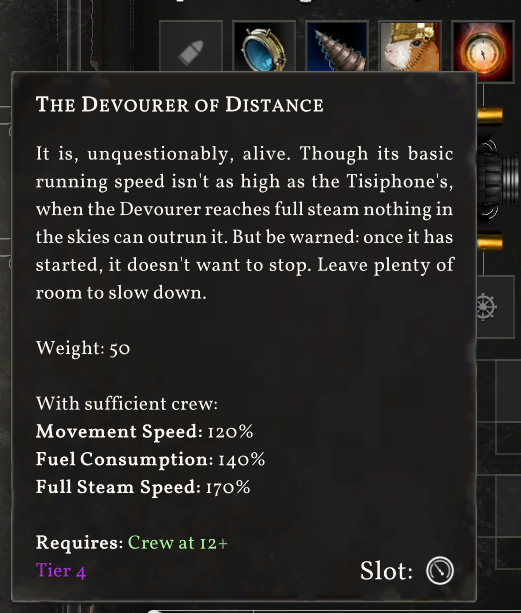 This is it already! A relatively short and sweet quest, incomparable to the long, long grind that was obtaining the Fulgent Impeller in Sunless Seas.

From a pure min-maxing “numbers” perspective, the Devourer’s performance is pretty close to the “ordinary” Tisiphone.

The 5% less normal speed were barely noticeable for me after cruising around for about an hour – however, the Full Steam mode on the Devourer is something I dearly want you to experience.

I think I will be sticking with the Devourer due to its better fuel efficiency – and of course, because it is simply so cool.

Here we come to an end for Sunless Skies The Devourer of Distances – Exotic Engine Guide hope you enjoy it. If you think we forget something to include or we should make an update to the post let us know via comment, and we will fix it asap! Thanks and have a great day!