In this detailed guide you will know pretty much anything you need to know about alcohol (as of patch 0.7.0.24) and WHY YOU SHOULDN’T DRINK IT! Or at least, when to…


Unless you want to become lotar, go ahead then.

Most people, when first playing Stoneshard (including myself) usually buy into alcohol as an effective pain relief. Well I’m here to say that IT’S NOT!!!


Alcohol is a very ineffective coping mechanism to deal with pain, both in real life and in Stoneshard. It really only shines for when you have small amounts of pain,

which is about ~10-15%, however, you shouldn’t even bother with alcohol at low amounts of pain since it will just slowly decrease while you’re resting and regenerating.


It also makes you more thirsty. Don’t be fooled by that flat decrease in thirst after the first few turns. It slowly creeps back up to where it was and you often end up with more thirst than if you didn’t drink at all. This means that you will have to drink more water, and when you’re in a dungeon with only one or two waterskins, drinking a lot of alcohol may screw you. You also have to keep in mind with the new patch, using skills makes you more thirsty. Drinking large amounts of alcohol in dungeons can literally kill you by making you so dehydrated that you won’t be able to use your skills. Of course this won’t ever happen, even if you are really bad at the game (probably), but you shouldn’t take the risk anyways.


Another thing to watch out for is drinking while in combat to relieve pain. You really shouldn’t… 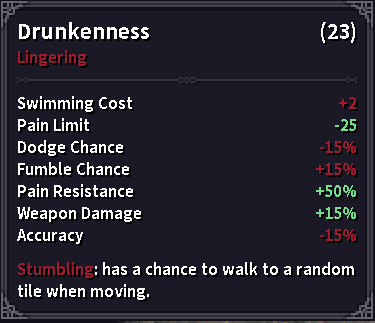 While being drunk does increase your pain limit, resistance and weapon damage it also makes you unable to hit anything. Drunkenness is especially bad for any dual wielding user as it lowers dodge chance and increases fumble. Drunkenness also has a chance to to cause confusion, and do you really want to be confused in a life or death situation?

Dark Ale is the cheapest alcohol in the game. It is also the sh1ttiest, as it offers piss poor pain relief. It causes 14 turns of drunkenness. Dark Ale should never be bought or even stolen. It’s frankly a waste of space. 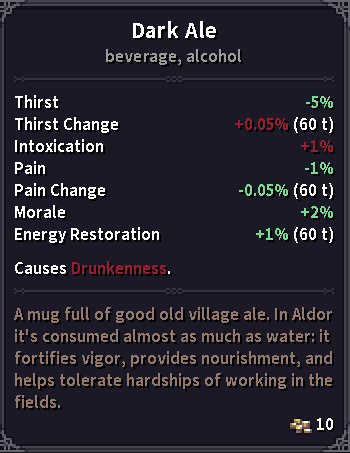 Spirit is a horrible choice for solely pain relief. It decreases your sanity and makes you extremely thristy. You also MUST use an antidote or antitoxin to reduce Intoxication. It also causes 126 turns of drunkenness, which is the most in the entire game, doubling the drunkenness of brandy while also giving you terrible debuffs in return. You should only drink this in emergencies, it’s better to not drink it at all though. My tip for you here is if you are going to throw this, make sure you don’t accidentally drink it… 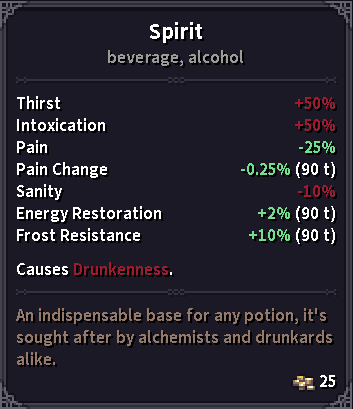 Mead is okay, but it still shouldn’t be consumed at all. It causes 23 turns of drunkenness. Use mead primarily for throwing at tough enemies, as it’s a better throwing weapon than a pain reducer. 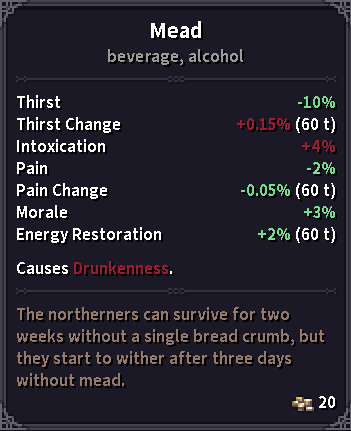 Mannshire Fortified is the superior early game alcohol, if you don’t want to buy Brandy that is, as Mannshire Fortified is relatively cheap. It gives you the drunkenness effect for 28 turns. It can be considered very good if you’re using it solely to get drunk, as the actual beverage offers no downsides other than making you very thirsty (13.5+ Thirst Increase after 90 Turns). However this is a double edged sword as drinking this in combat makes you very thirsty when also using skills, especially as a dual wielder. So be prepared to have 2 or even more waterskins when consuming Mannshire Fortified as a buff to your damage consistently. 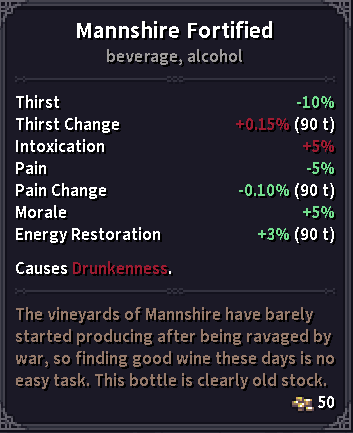 Brynn Vermouth is a good choice for pain relief. It still makes you fairly thirsty and only gives you 33turns of drunkenness. Even with the decrease in price and it being less rare, Brynn Vermouth does not have an edge on Elven Ice Wine. 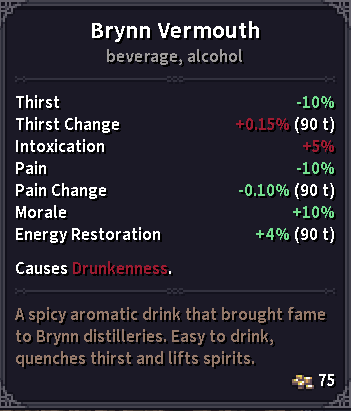 Elven Ice Wine is a late game beverage that should never be thrown (it’s expensive). The wine is an excellent morale booster and provides decent pain relief. It costs on average about ~200 crowns, which is extremely pricey even for a +30% morale boost. However if you’re that filthy rich to regularly be able to buy Elven Ice Wine you definitely should buy it instead of Brandy. It’s better than Brandy because it’s not that taxing on thirst, as well as intoxication and the ridiculous 71 turns of drunkenness. However, the reason why it’s below Brandy is because of the steep asking price of +200 crowns. It also provides less pain reduction than Brandy, (which is what the entire guide is based on). Fortunately, Elven Ice Wine does beat Brynn Vermouth, as it intoxicates you less while providing you with a decent energy restoration buff. It also only gives you 6 turns of drunkenness which is extremely good or very bad depending on how you use alcohol. 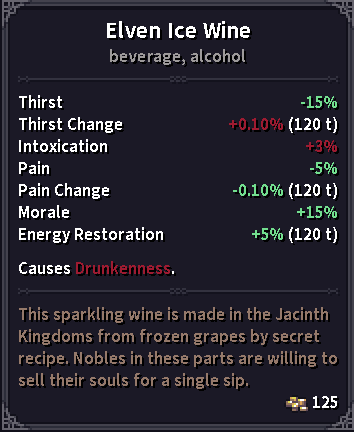 Lastly, we come to the best alcohol in the game; Brandy. Brandy can be obtained very early on and is somewhat costly. It provides you with a hunger reduction and resistance yet it makes you very thirsty. It is unwise to drink this as a substitute for water or if you’re low on it. It gives you bonus energy resistance and also some sanity. However it gives you the drunkenness effect for 71 turns, which is extremely long. 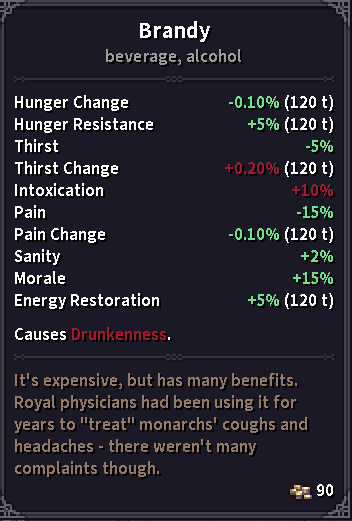 If you read (or skipped(screw you)) my list of alcoholic beverages then you’re probably eager to go down some brandy or mannshire fortified. You shouldn’t. 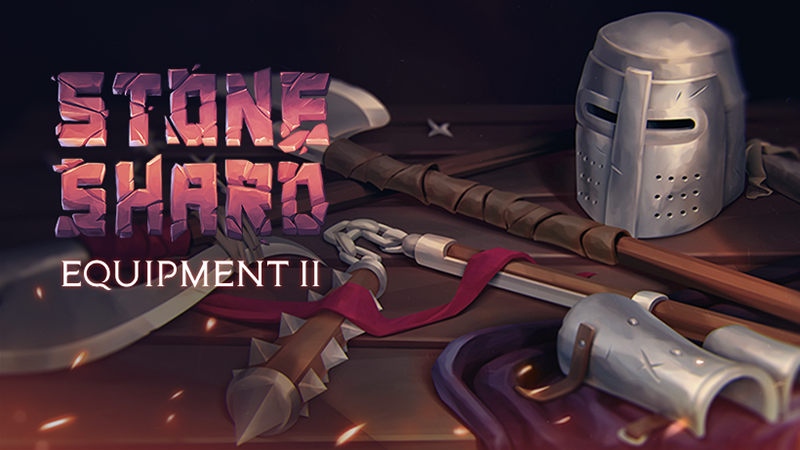 With the Equipment Update II [0.6.1.0], the developers introduced a new mechanic to the game: Throwing.

This made alcohol a lot more impactful in the early game, as you could now throw it and enemies would receive considerable debuffs. Throwing alcohol at enemies or bosses early game significantly increases your chances of survival. This is because the “Covered in Alcohol” debuff applies +5% Fumble chance, and if you’re a pyromaniac you can greatly reduce an enemy’s fire resistance. Please note that the type of alcohol doesn’t effect the duration, it always lasts for only 9 turns no matter what alcohol you use.

Instead of using alcohol, why don’t you use these? I guarantee you they are 5 times more effective and more practical than using alcohol.

When I first saw soporific sponges, I skipped them, I admit it, I didn’t know any better. But now I am educated on this topic! Soporific Sponge is the BEST item in the game to combat pain. You don’t even have to use an antitoxin or antidote as it relieves 50% of pain in ten turns while only giving you 10% intoxication. What a steal! The only downside is you cannot use it in combat as you will be put to sleep for 10 turns. 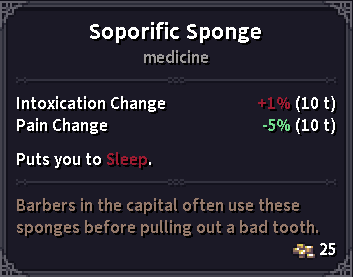 Ether Inhalers are awesome, especially if you choose to use this in combat, as it grants you 100% pain resistance for 30 turns. It also increases your sanity by 5%, which is very good as high levels of pain reduces your sanity. The only real issue with it is the 40% intoxication increase. 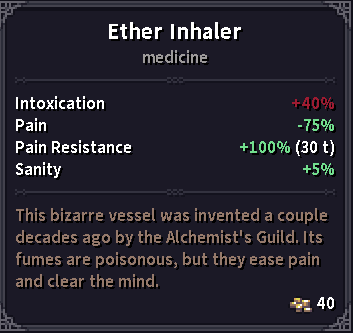 TIP: You can throw oil to cause the “Covered in Oil” debuff. It greatly increases fumble chance.

Using alcohol substitutes increases your intoxication levels considerably, especially if you decide to use an Ether Inhaler. You should always carry one of these if you decide to bring sponges or a inhaler.

Antitoxins are excellent when paired with Soporific sponges. They are relatively cheap and reduce Intoxication by 50% after 25 turns. They also cut in half the duration of all drug aftermaths, which is very good. Be prepared to have some food and water set aside if you choose to use this though, as it increases thirst and hunger by 20%. 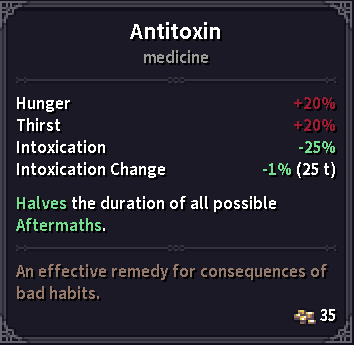 Using antidotes when paired with inhalers is quite the good combination if you don’t mind being confused if you choose to use the inhaler in combat, as the confusion debuff lasts for about 21 turns. It is quite expensive and you sustainably only have access to it when you get to Brynn. Antidotes are also an excellent remedy when fighting forest vipers, as it removes poisoning quickly and gives you 75% resistance to it. The only small problem with antidotes is that it decreases health replenishment by 5%. 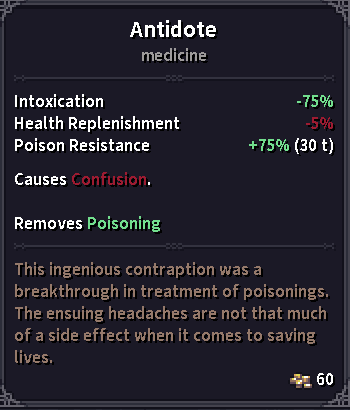 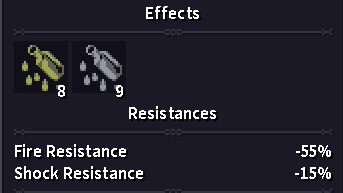 Where to find these Substitutes?

You can find a Herbalist (or priest) in almost every town (because there are only three so far).

You can find Frid at the far south of Osbrook. He sells you antitoxin and a sponge. 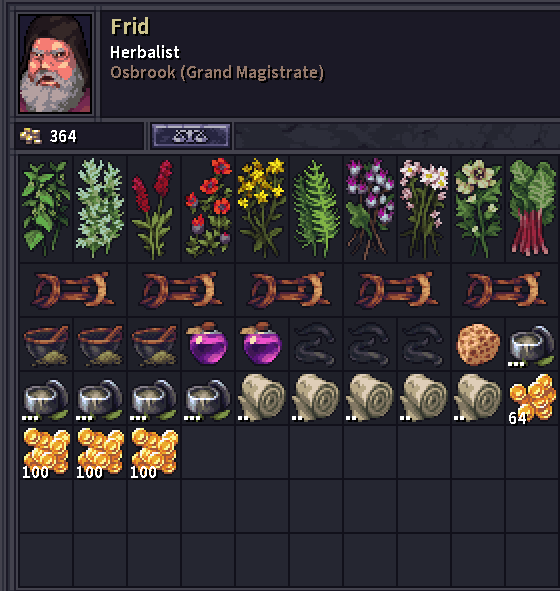 You can find Josh, the priest, in the church. He sells you antitoxin and an inhaler. 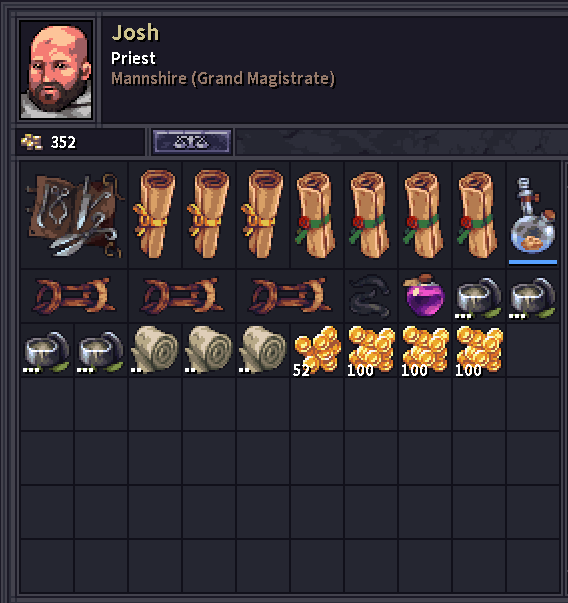 You can find Alaric in Mint Square (NW) at the market place. He sells you everything you need. 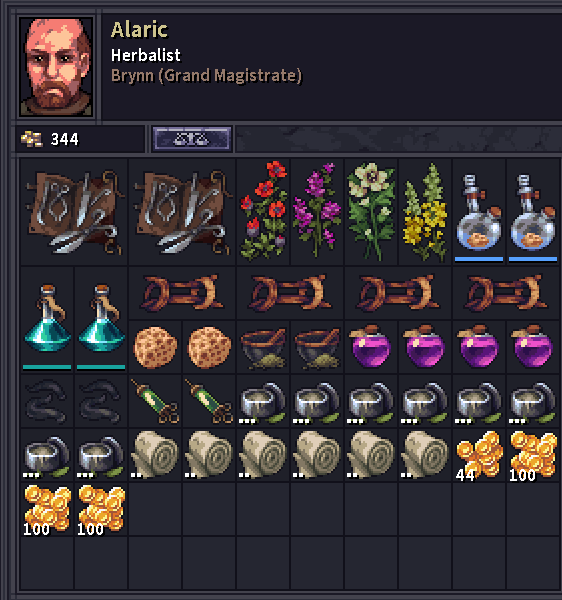 Where to find Alcohol?

If you’re dead set on becoming an alcoholic then I will teach you (nearly) about EVERY PLACE you can find alcohol at!!!

Berat sells about two bottles of Elven Ice Wine per stock. An elven guard can also sell one.

Brynn’s General Merchant can possibly sell about every alcoholic beverage at once, though he doesn’t sellElven Ice Wine or Spirit in my case.

Fat Yann sells two bottles of Brandy, and you can steal two bottles of Brynn Vermouth and some Mannshire Fortified from him. He can be found in the Old Towers sector of brynn, (NE) a bit below the Watch Tower Inn.

The two Innkeepers of Brynn can sell one bottle of Brynn Vermouth each, and other alcoholic beverages.

TIP: Sell your barrels of beer to innkeepers.


Lastly, the pawnbroker sells some Brynn Vermouth from time to time.

TIP: Do not f#cking buy or sell anything to this thief. He will scam you. Sell all your dungeon loot at the jeweller instead of this fat F#CK!!!.


Gunda, The Food’s Trader actually sells the most of Mannshire Fortified than any other vendor in the entire game. 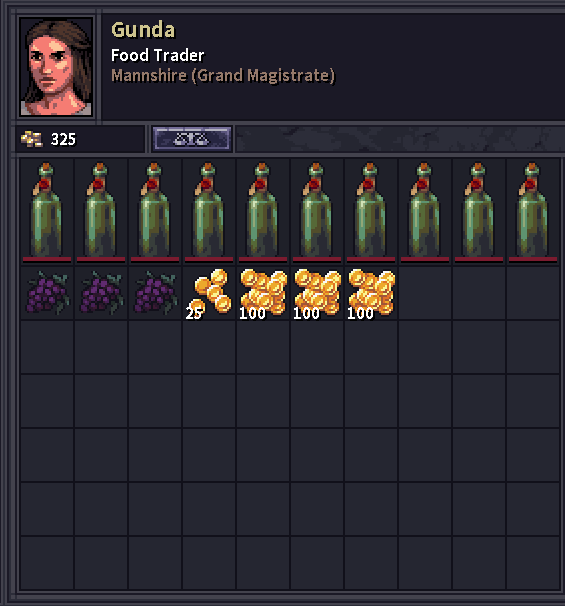 She can be found in Mannshire, by the market.

If you’ve reached the Conclusion, congratulations! I hope this guide has informed you to make better choices and to not drink alcohol!


For the hurr durr people who skipped the entire article, I’ll offer you a TD:LR:


Alcohol is very ineffective, just use sponges or inhalers paired with antitoxins or antidotes…

Here’s an image of a chicken for no particular reason.

Here we come to an end for Stoneshard Guide on Drinking Alcohol Info hope you enjoy it. If you think we forget something to include or we should make an update to the post let us know via comment, and we will fix it asap! Thanks and have a great day!