This is a strategy that makes beating Morgan Freeman, even on Diabolical difficulty, childsplay.

Before the fight select Call Girl and Super Craig, the 3rd ally is pretty much irrelevant, however, Captain Diabetes or Mysterion are a good choice. As for the New Kid the best class for the fight is the Plantmancer, as all of it’s skill’s are useful during the fight:

Root Burst – can knockback Freeman which will be very useful during the fight, also it can be used to remove Charm by also hitting your team member if Purifying Petals are on recharge

Nature’s Gift – can revive your team members (for most of the fight that is very unlikely to happen, however, it may once Freeman gains an additional move during each turn)


The secret to how this strategy works is the fact that while you cannot Charm or Confuse Morgan Freeman you CAN Enrage him. Thus you can use Super Craig’s Shining Hate Finger and Call Girl’s Blocked skills to have Freeman focus on them alone and be in constant control of the fight. Both skills require 1 turn to recharge and both give the user Blocking which will block up to 3 hits. So each turn you simply have to alternate between Call Girl and Super Craig in Enraging and attacking Freeman i.e. one turn have Super Craig Enrage Freeman and have Call Girl attack him, then next turn have Call Girl Enrage him and have Super Craig attack him, then just rinse and repeat.


When the fight starts cancel Freemans move with a Time Fart then place Call Girl and Super Craig in the same row as Morgan Freeman on opposite ends. The best is the top row where Freeman will be standing at first, as it also has the cactus there which makes the row have only 4 slots in total, which will leave only 2 spaces for Freeman between Call Girl and Super Craig. You can place Captain Diabetes or Mysterion in the remaining slot and use their Sugar Rush or Dread Rush skill to keep swapping places with Freeman each turn so he will stand next to the ally that he is going to attack i.e. the one that is currently Blocking and Enraged him. This is because if someone else is in his way to the ally he is targeting then he will either use his Charm skill or fart, so you will have to remove the former while the latter will likely kill the other ally. But if he is standing right next to them then he will most likely slap them.


Once the Clone appears fight it or Charm it using Sweet Scent which will cause it to likely Gross Out Freeman for you. After the Clone is delt with all that remains is the last phase where Freeman will add himself an extra move during the turn. At this point Freeman may be able to kill Call Girl and/or Super Craig depending on which attacks and order he uses during a turn. This is because his attack where he slaps an opponent has 3 hits so it breaks Call Girl’s and Super Craig’s shield, so if he uses it again or his fart attack right after it’s almost certain they will die. However, you can use your Time Farts to stop him or Nature’s Gift to revive them. If instead he uses his Charm skill as his first move then he will simply skip his next move as he will not attack the charmed ally and due to being Enraged he will not target anyone else. 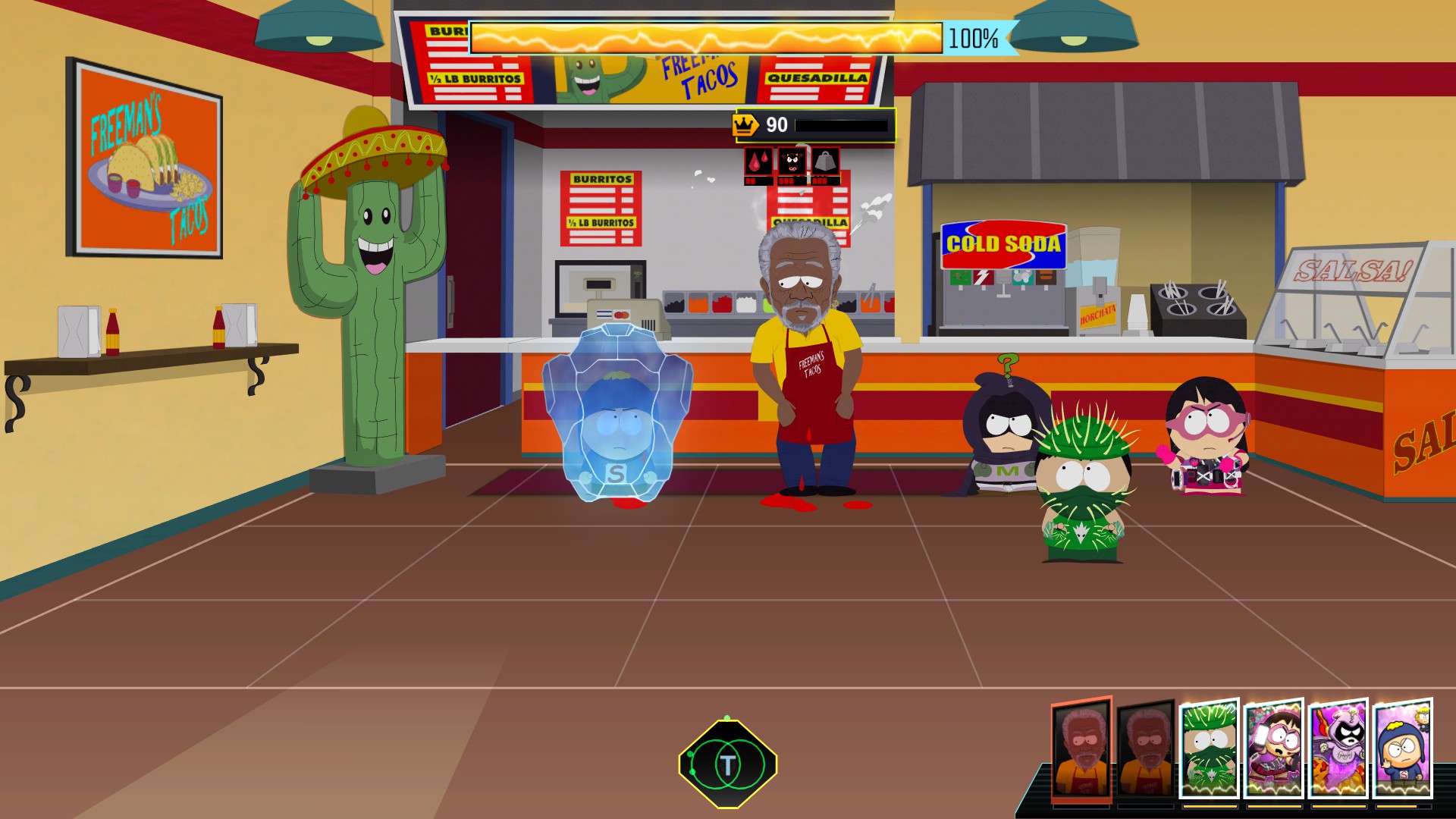 
If you have Bring the Crunch DLC you can use the Final Girl class instead. All skills of Final Girl work well for this fight too except Fatal Trim so you can replace that for the Speedster’s Double Edge.


The strategy is pretty much the same except during the fight use the New Kid and his Clone to fill the 2 colums between Call Girl and Super Craig with buzz saws using the Final Girls Saw Bleed skill. Then have New Kid and his Clone knock Freeman back and forth along the columns using Hammer Bomb to build up massive Hemorrhaging. It’s best if New Kid and his Clone have their turns right after one another, however if you have Double Edge equipped they can both knock him back and forth on their own. Or if you want to play it safe just knock him in the direction of the other column with the buzz saws which will also make him crash into your team member.


By the time Freeman goes into his final phase it will be pretty much over as it starts when he is below 4000 HP so it only will take 1 or 2 more hits before he goes below 3333 HP at which point you can use Final Girl’s Ultimate skill Final Vengeance which will instantly finish him off. As the skill instantly kills any opponent that is below 50% HP or any Boss that is below 33% HP and Morgan Freeman is no exception. 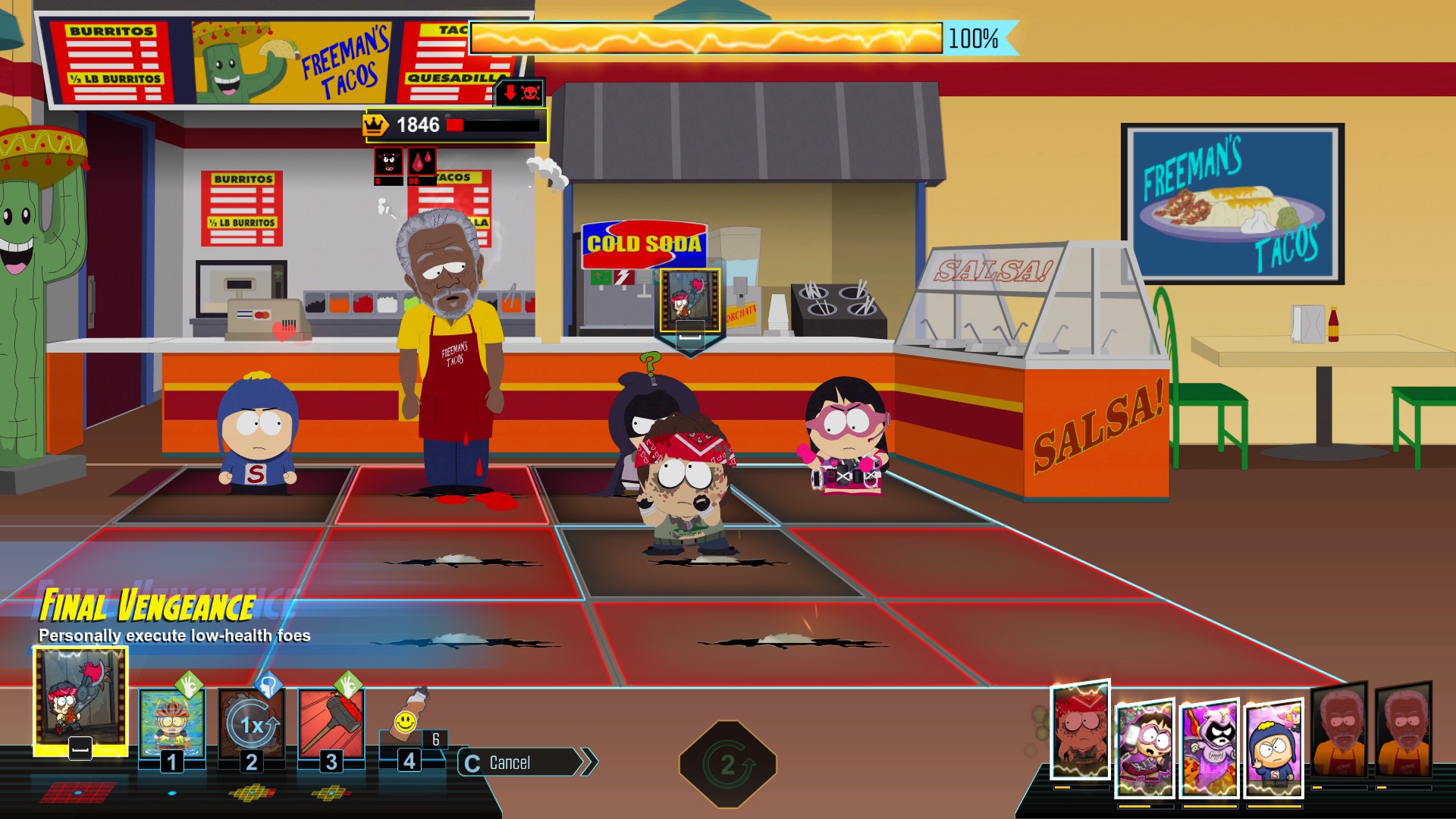 Here we come to an end for South Park The Fractured But Whole Best strategy beating Morgan Freeman hope you enjoy it. If you think we forget something to include or we should make an update to the post let us know via comment, and we will fix it asap! Thanks and have a great day!